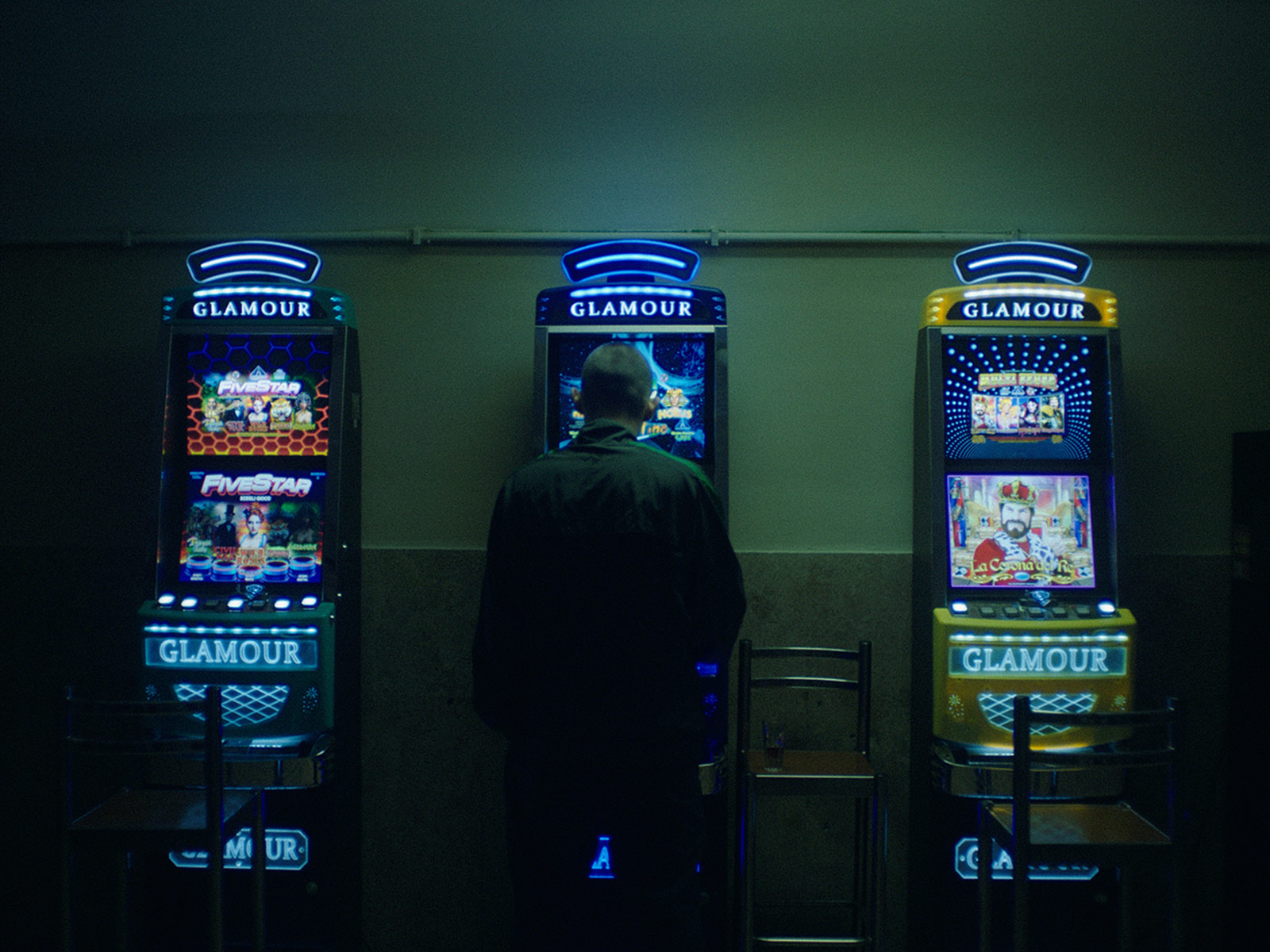 “A movie about two human beings that fall in love.” That’s how Carlo Sironi describes his first feature film, Sole. Starring Sandra Drzymalska and Claudio Sagaluscio – a non-professional actor –, the movie deals with issues such as surrogate motherhood, loneliness and falling in love. This moving debut, which has been selected by international film festivals like Toronto and Venice, is finally screening in Spanish cinemas.

Sole is the title of the film as well as the baby’s name, why did you choose it?
Sole is exactly the Sun. It’s cool because, in Italian, the Sun is male but the name is female, so I liked this sort of duality. There is this metaphor that the Sun is the principal star of the solar system, so our character, the baby, is in the middle, and the rest of the characters surround her. It’s just that.
This is your first feature film, but you had already directed some short films. In which new ways has Sole allowed you to express yourself and your ideas in contrast to previous shorter pieces?
They are two different universes, but I believe that the most important is that in a movie, even if you don’t see it, you have a lot of crossroads. And those crossroads can happen during the shooting, and you have to make a quick decision that could perhaps change the movie. In short films it’s different. You need to have an idea, and if the idea and the way you are making that idea work, it’s done.
The film explores a controversial, delicate and complicated topic: surrogate motherhood. Why did you decide to approach it?
This movie stems from a research I was doing for a short film. We came across this kind of fake adoptions, and when we discovered this issue, we thought that we could probably make a movie about it. However, at first, we didn’t want to make a movie about surrogate motherhood because it’s a cruel world.
For me, Sole begins when we decided to not make it from the point of view of the woman who decides to sell the baby but from the point of view of someone who pretends to be a father and gets paid for it, for giving a surname to a human being; this was interesting to me. I think that’s when we said, okay, we can make a film that starts in that world, but then it’s about the main characters, Ermanno and Lena. For me, it was always like this. It wasn’t a feature film talking about surrogate motherhood but about two human beings that fall in love. It is a love story at the very end.
I’d like to inquire about the research project. Did you meet any woman who is or had been a surrogate mother? What people did you meet and talk with in order to know more about the subject?
I had the chance to read the depositions of three women who’d been involved with fake adoptions. I worked on the side with a president of the juvenile court in Rome – they were there working on three cases that just had been discovered, so I had to read a lot of depositions. Me and the screenwriter based some things on those documents, but there was a moment when I said, okay, now I know how this reality works but I have to forget everything about it because I have to make a movie, and I want to create a love story. I had to let my imagination lead the game. 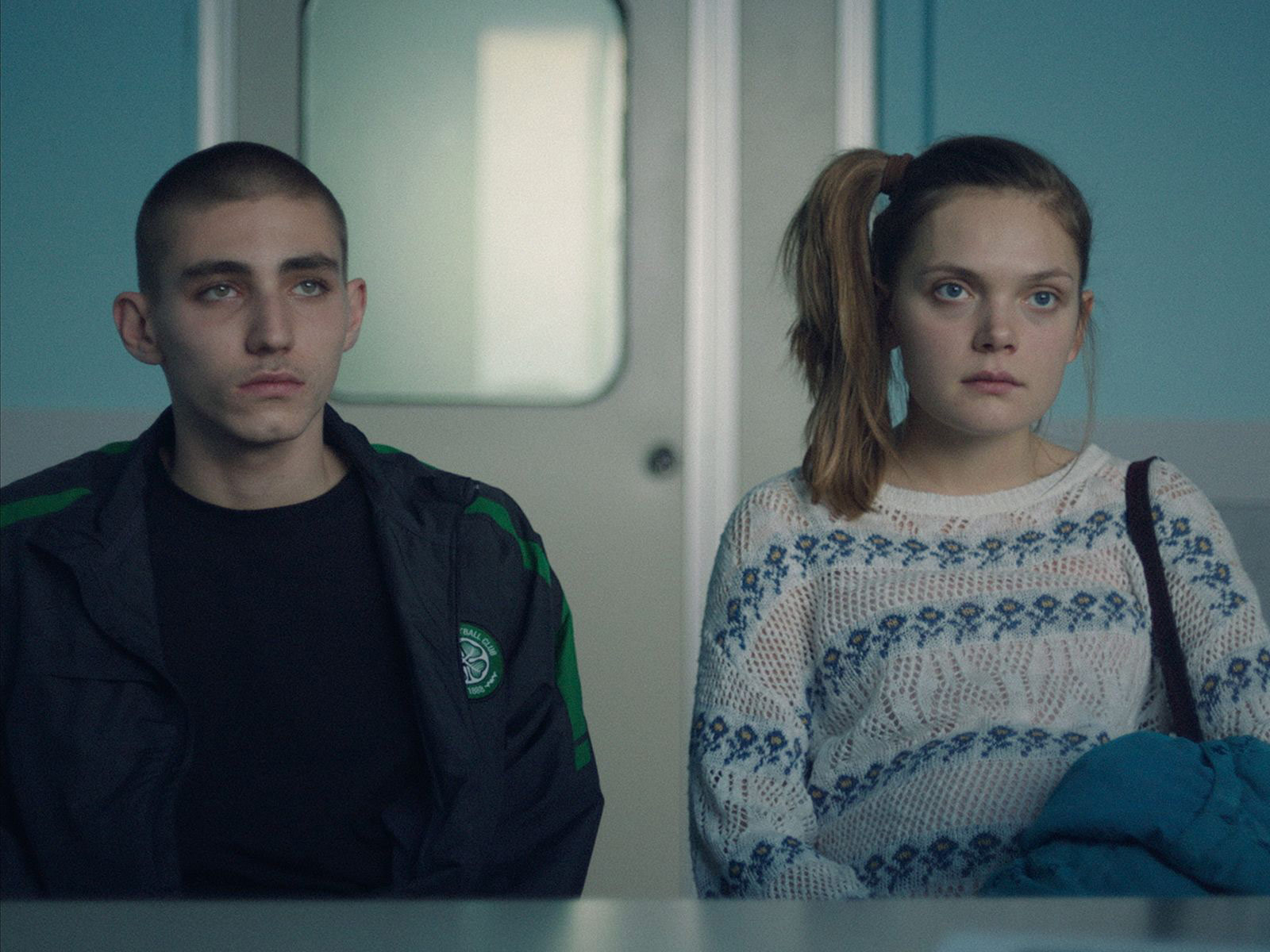 How was it working with the main actress, Sandra Drzymalska? What instructions did you give her during the filming, and how did she prepare to play such a hard role?
Sandra is a Polish actress. We searched all over Eastern Europe and finally met some actresses, but then I met Sandra. She had learned Italian for the movie – she didn’t speak a word of the language before –, so when we were casting, she spoke this kind of broken Italian.
Also, I saw her playing the role in a very child-like and light way, and I really liked her proposition. I liked the way she was proposing the character to me, so I picked her and we had the chance to do a lot of rehearsals. During those rehearsals, we explored all the possibilities of the character. We rewrote some things together. I had the chance to add new things while I was working with her and Claudio, the actor that plays Ermanno.
Tell us more about him.
He is a non-professional actor. The funny thing is that Sandra learnt Italian, but she only learnt the lines of the script. So I directed her in English through the rehearsals, but Claudio doesn’t speak English at all, so the two of them couldn’t communicate. They didn’t have a language in common, so it was funny to me because I worked a lot with them translating each other. It was always the three of us. It was really nice working with them, and it was easy because I think Sandra gave everything to the character.
I’d like you to expand a bit more on the experience of directing a non-professional actor as well as managing two different languages on set.
It was easy but long for Sandra. And Claudio, for me, has the two most important features of the character: he has real pain in his eyes, and when you see him, even in real life, he gives you this sensation of potential tenderness, like someone who needs protection – a fragile man that needs to be hugged and taken care of. So I think it’s interesting for a character like Ermanno, who takes care of a baby as well as of the girl. I definitely had to pick someone fragile. I really like them working together. 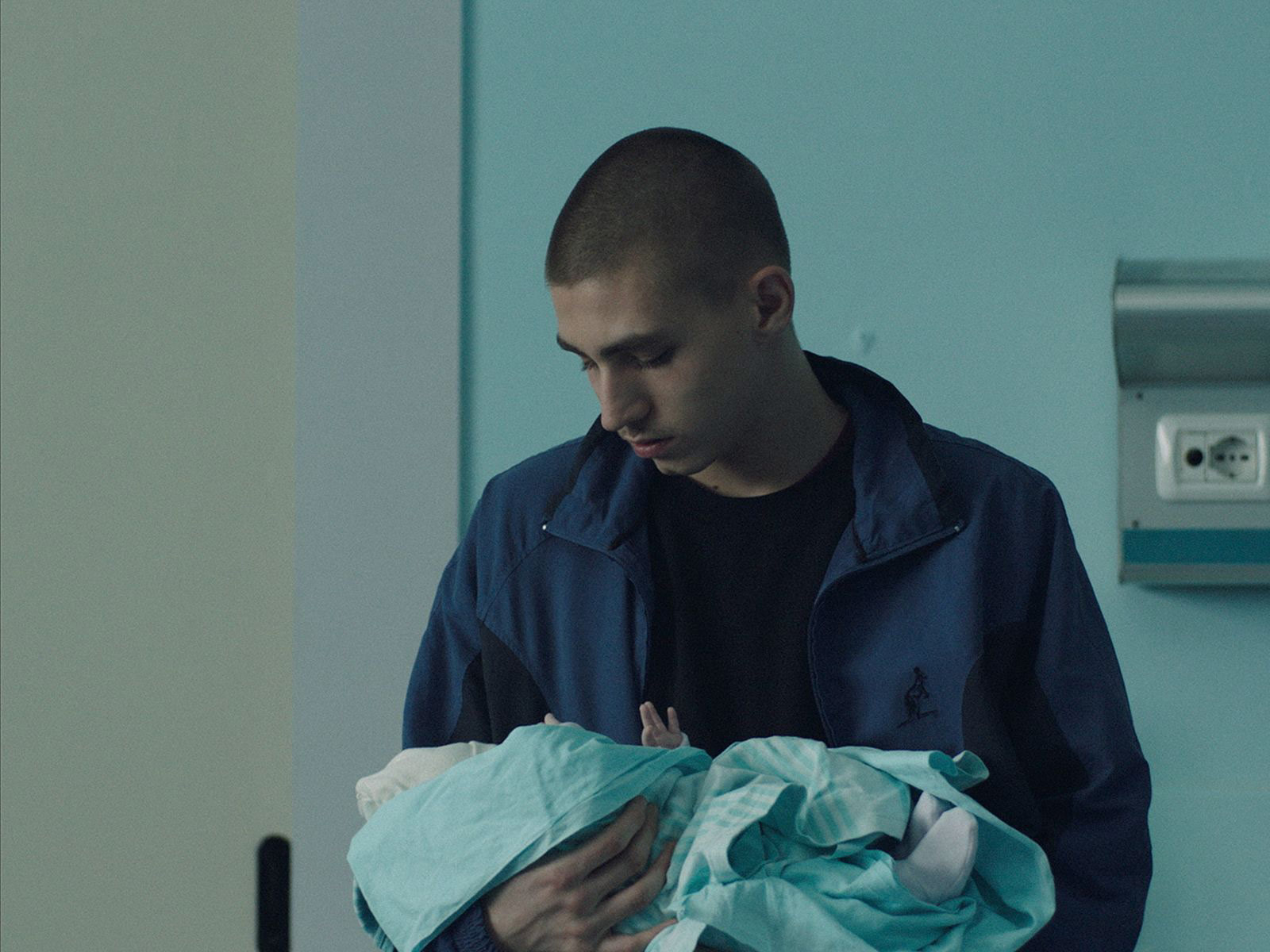 Sole’s main characters are young people who belong to a low social class, why have you decided to portray this part of society?
Because it is the part of the society that usually gets involved in those kinds of things – of course, this doesn’t happen to rich families. Also, in Italy, surrogacy is illegal on a lot of levels, it’s very difficult even to have it abroad. So if you are not bourgeois, this is probably the way you’re going to go, so it was natural for me.
For example, there was a moment when we were discussing why Lena is from Eastern Europe; she could be Italian, but looking at the statistics, we realized that most of the girls who’re involved in these kinds of fake adoptions are from Eastern Europe. So we decided to stick to reality on this side but let the imagination run on another side.
I’m curious to know, where did you film Sole?
It is called Neptuno, like Neptune, the god of the sea. It’s a small town on the – let’s call it – Roman seaside. For me, it was important to not set the story in a city or in the suburbs of a city, but in a place that has more like a ‘small-town-by-the-sea’ atmosphere, so you can feel like it could happen in England, Spain, France… everywhere, anywhere. This was the idea.
In Sole, you use the almost square 4:3 format and opt for cold and blueish tones. Is it a way to make the story even sadder?
I don’t know. To me, the title of the famous novel Blue Is the Warmest Colour is true. It is the warmest colour for me. I have a tendency to have an emotional response to blue, so I thought it could be interesting for the movie. At the beginning I decided to paint the father’s room blue, there is also the sea, and then I started to do this in blue, and the other thing in blue… At some point, I decided that the movie was gonna be blue.
The square format is because I love classic cinema, especially from the 1950s, and I think there are a lot of tools and language used in classic cinema that we’ve lost nowadays. Even the framing of classic cinema is great! To be classic is a really interesting proposal. Plus, the movie happens 90% indoors, so that’s the best format for me – also for the characters. 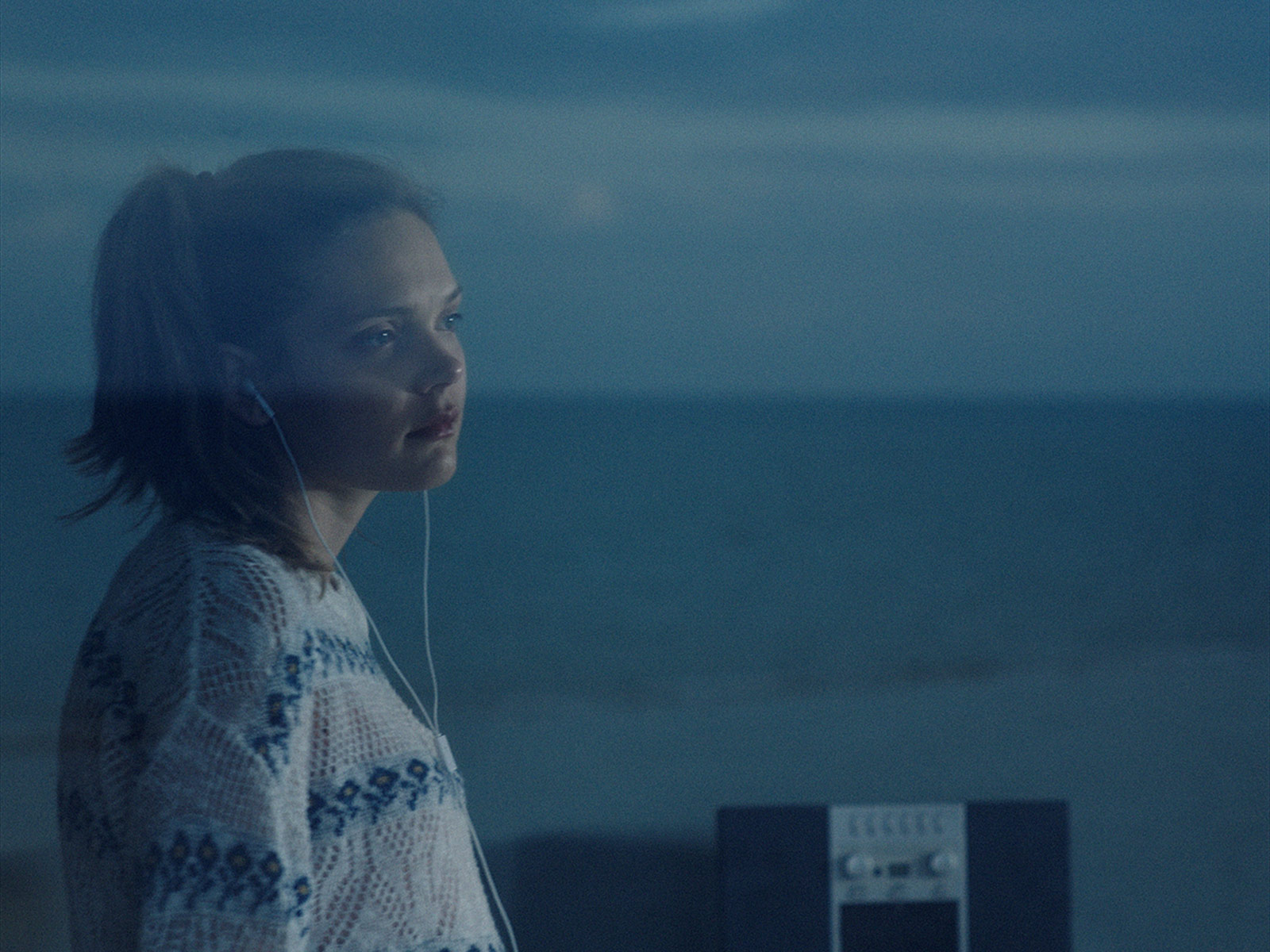 During the last edition of the Berlinale, filmmaker Paolo Taviani referred to you as “an original filmmaker and someone who goes against the current and will undoubtedly make people talk.” How did you feel when you heard these words from such a renowned director?
I was with him on stage, and it was a great honour. I’m very happy that Paolo watched the movie by chance and, in a way, fell in love with it and we got in contact. It was great for me! I grew up watching the Taviani brothers movies because my father, who was a film director working in television, used to be their first assistant when he was young.
Sole is succeeding in international film festivals like Venice, Toronto and Berlin. It has also just been nominated for the European Discovery 2020 Prix Fipresci of the European Film Academy, which recognizes the debut of emerging filmmakers. How are you experiencing such good reception and feedback?
It’s been great! I mean, I’ve been working on the movie for a long time because of production, finding some funding, etc. It was long and complicated because it’s my first feature film. I’d been working on the movie for years while juggling other projects. To finally see that all my ideas were working made me extremely happy. It’s simply great to see that your ideas get to people. And also, to have the feeling that I did a movie that people anywhere could understand. I was travelling for six months and going to festivals, but then, they locked us down in our houses. That was strange.
To finish, after Sole, do you have new projects or ideas in mind for the future?
I’m writing my second feature film as well as writing an adaptation of a movie that maybe I will make afterwards, but they are very different from Sole. The movie that I’m working on now is a strange teenager summer movie about an island. I’m trying to collect memories from when I was 15 or 16 and make a movie about two girls that become sisters during the summer. 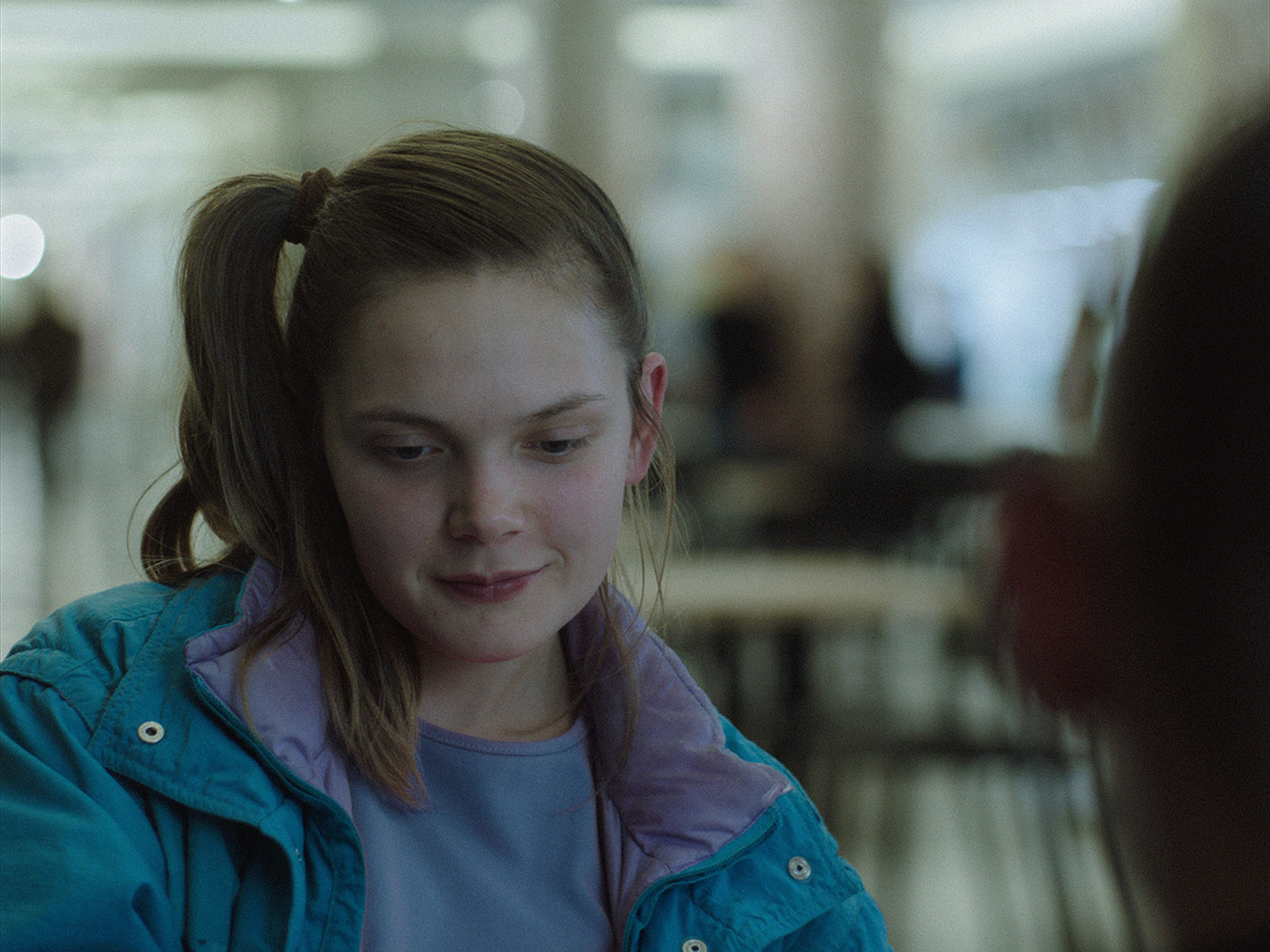 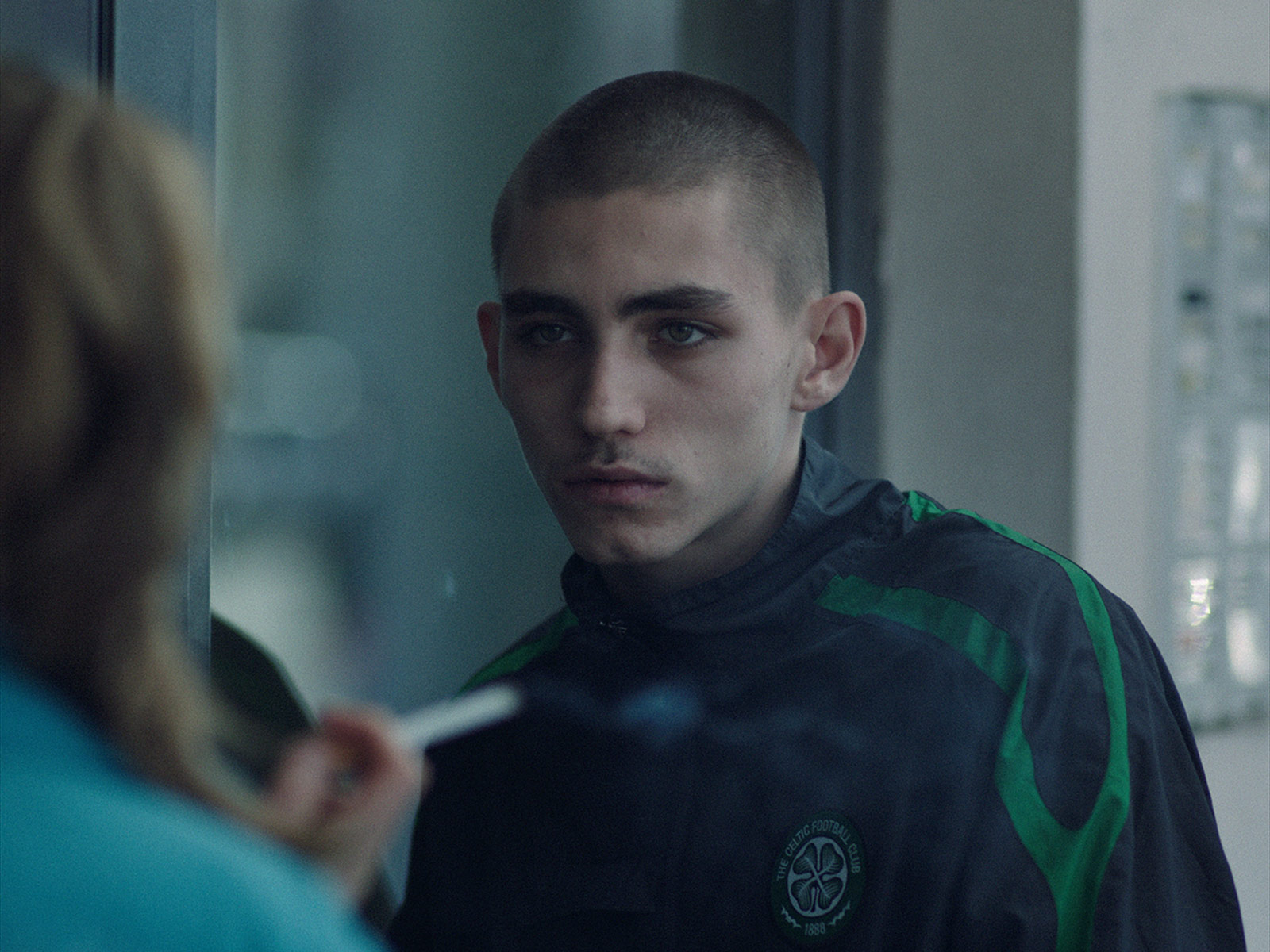 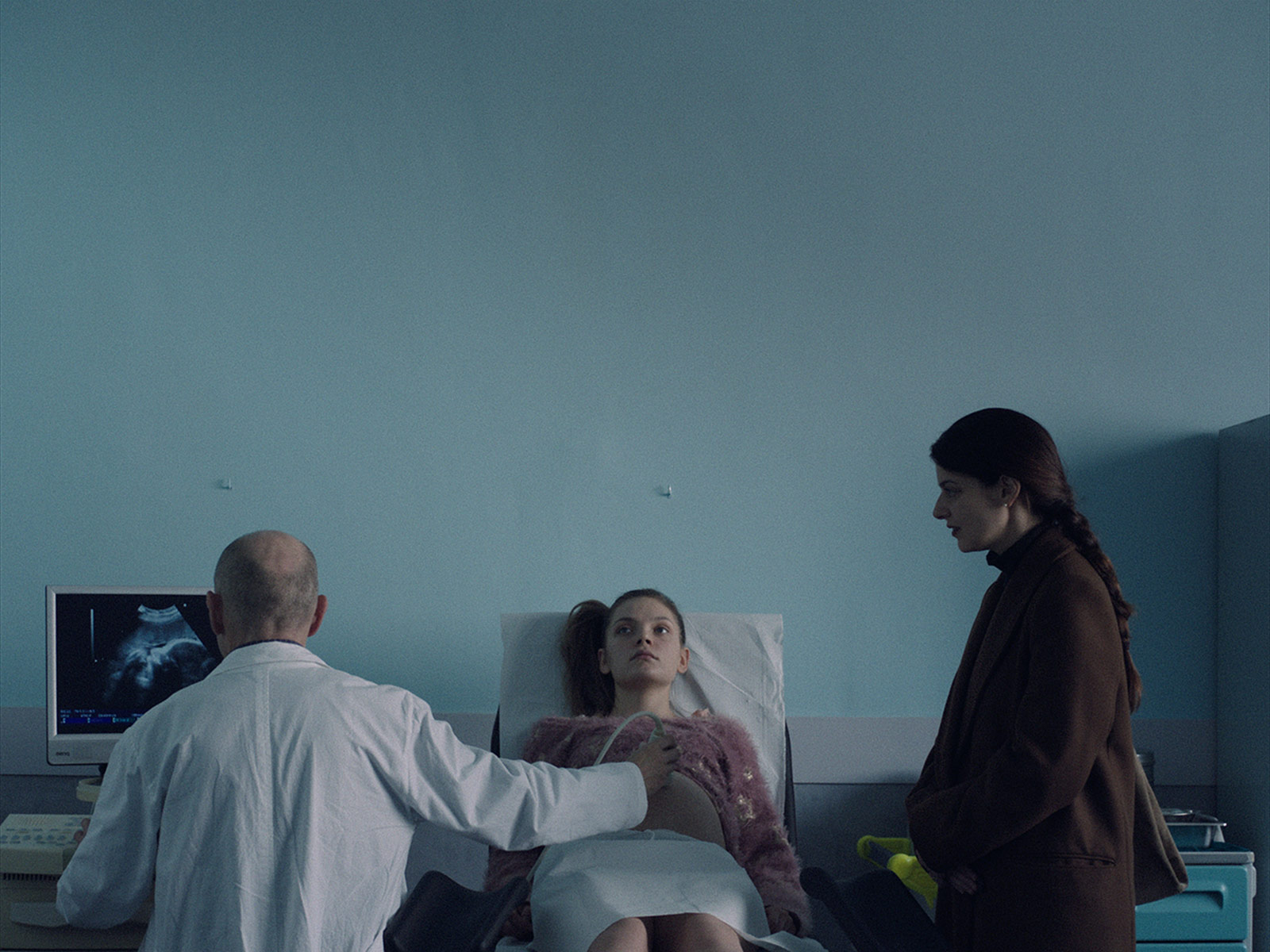 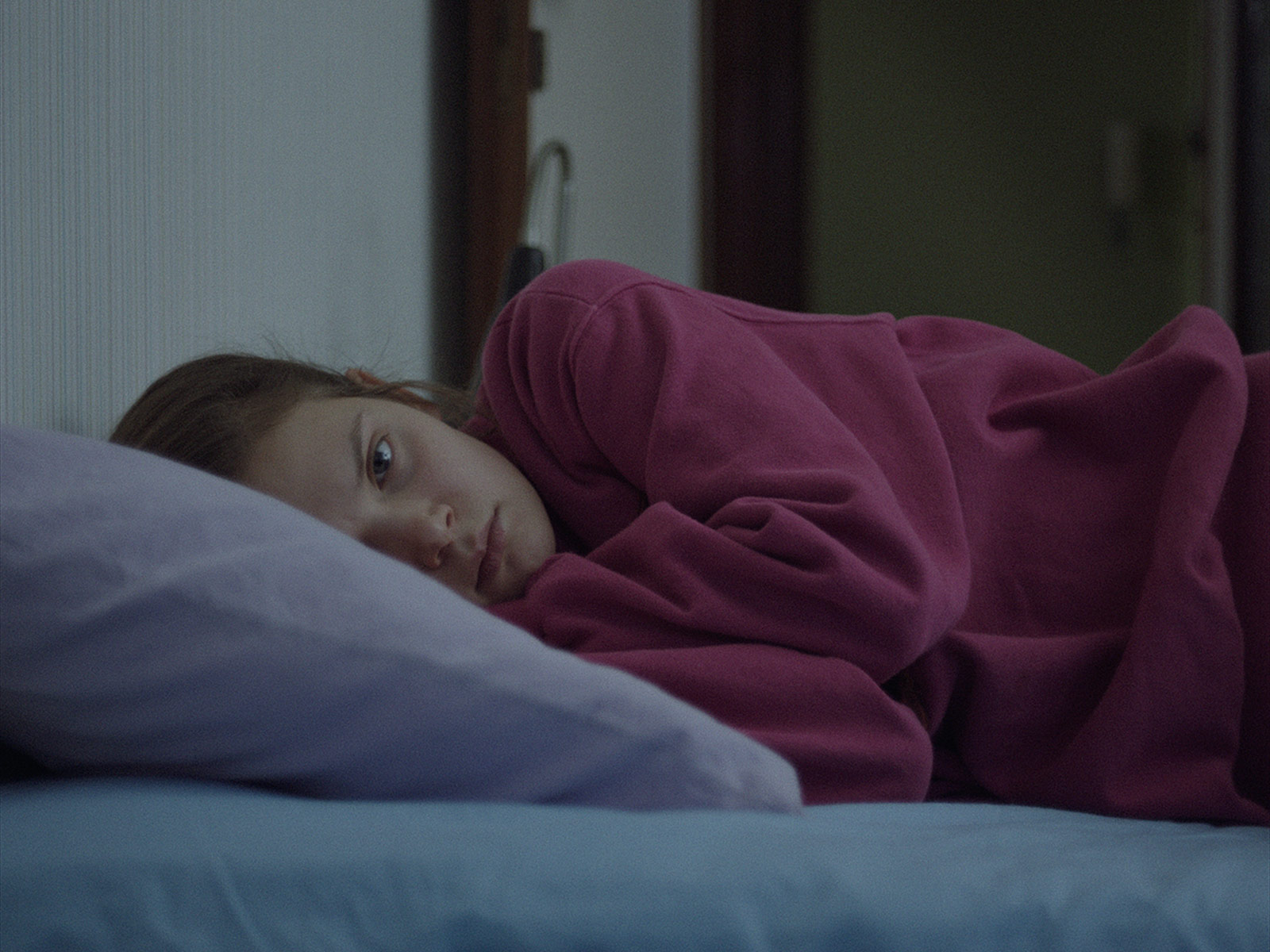 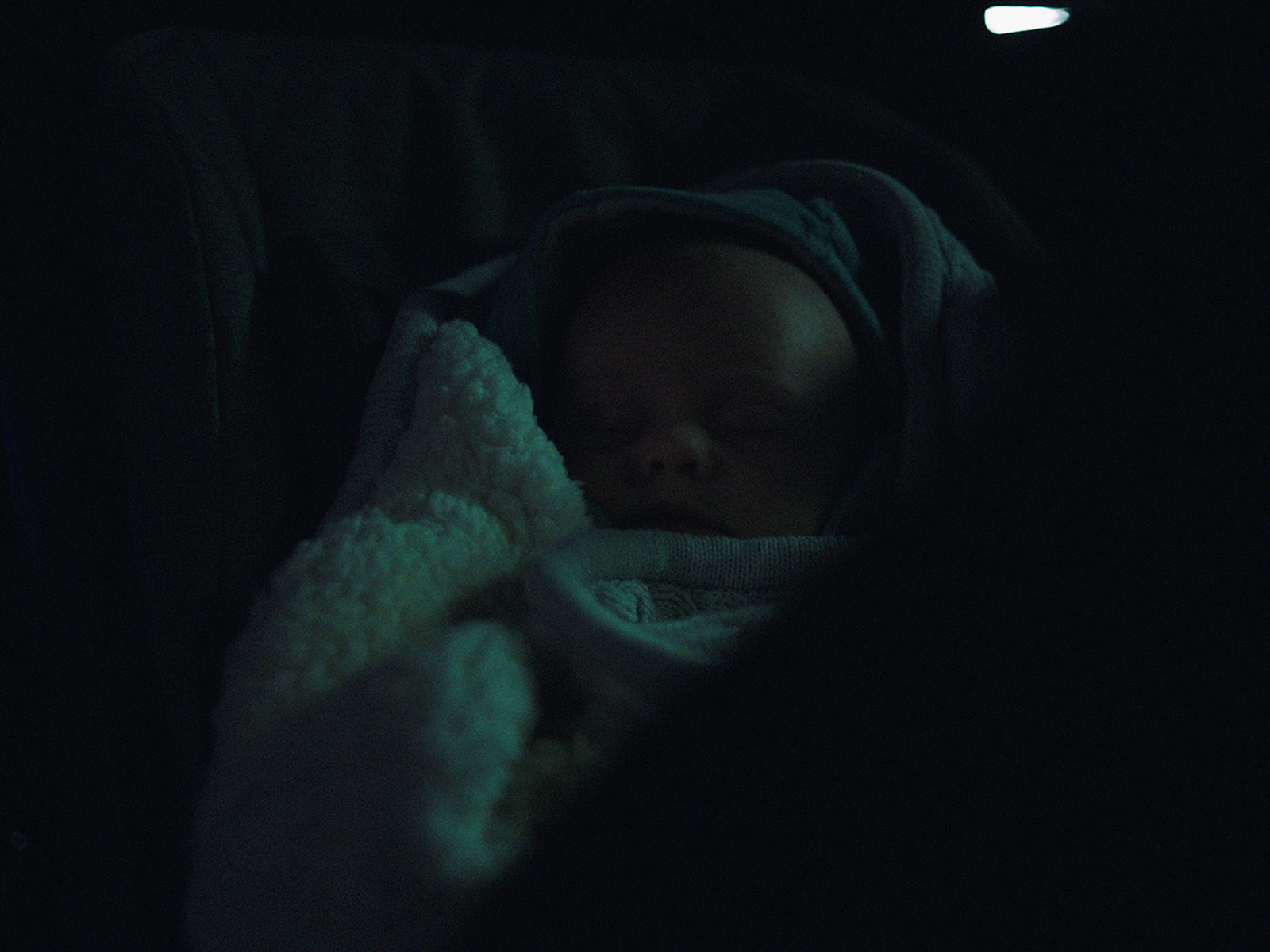