First he took Athens, now he takes the world 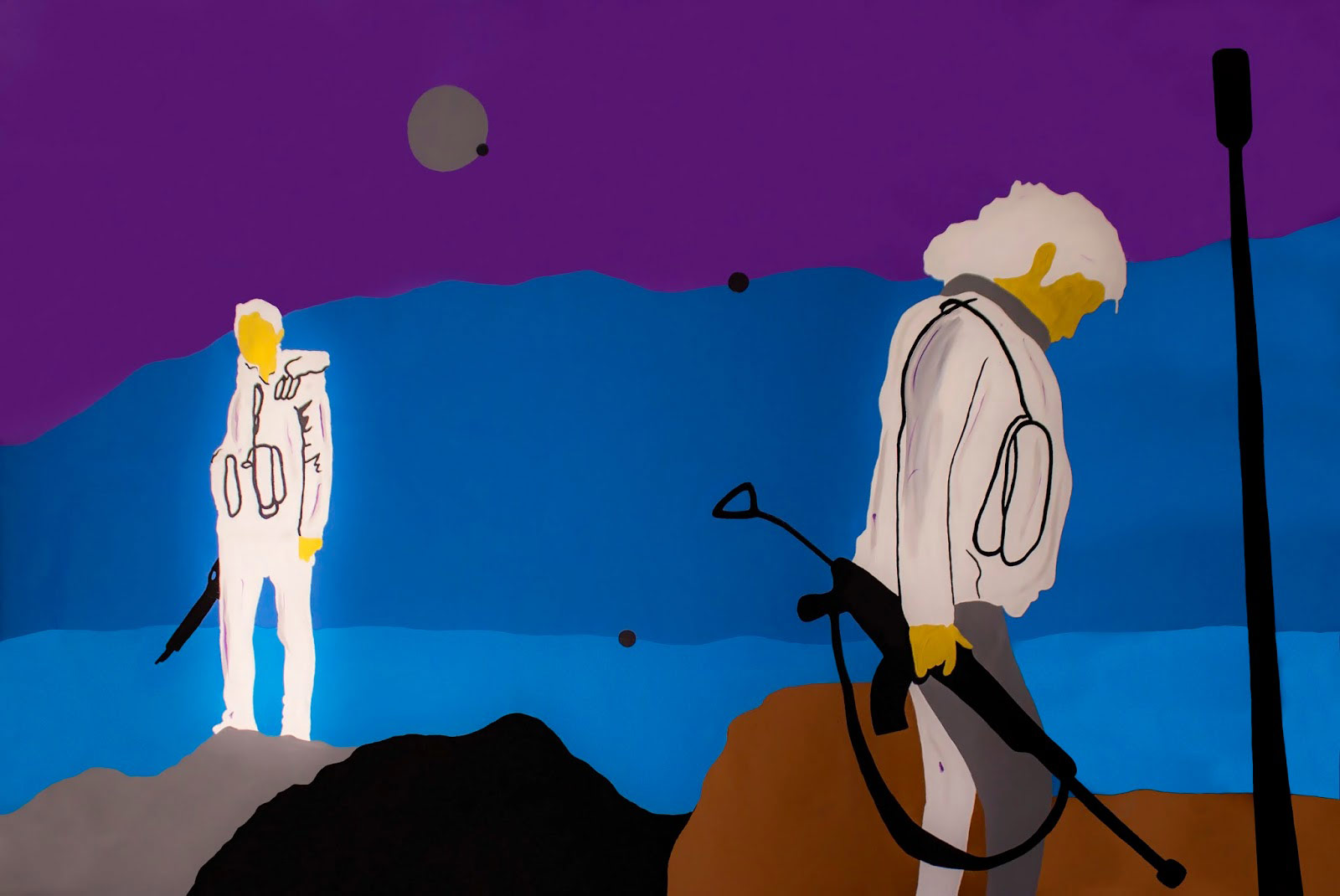 Have you ever visited Athens? If, yes, then you may have noticed something unique about this city full of paradoxes. Street art is present almost everywhere in the city, from simple tags on recycle bins, to breathtaking murals on huge walls. City’s street art history is dated back in the ‘80s along with the early beginnings of rap culture in Greece. Music and this form of expression on this city’s walls were entwined, following of course, the American model. 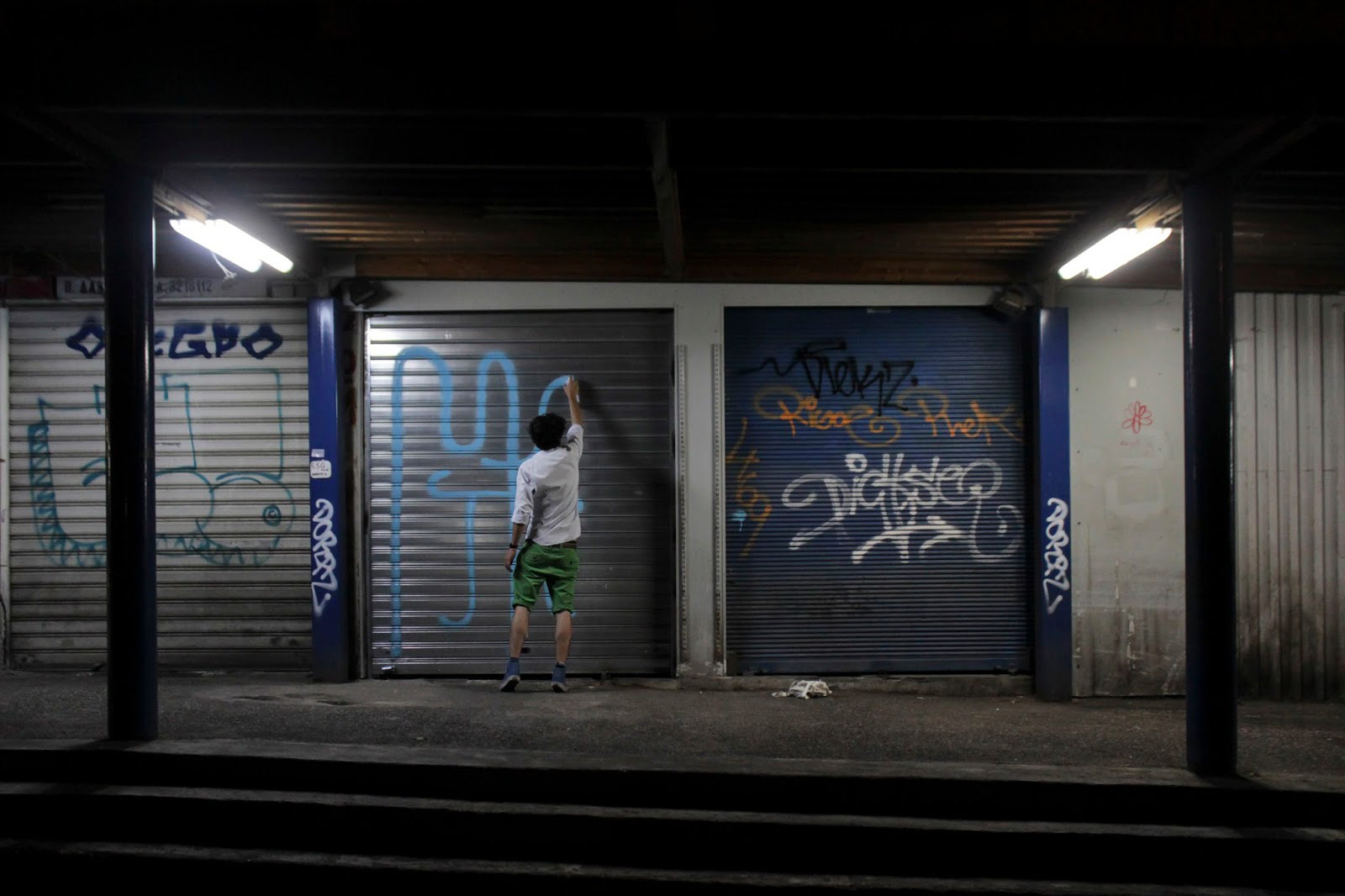 However, when the crisis stroke the country, street art boomed in Athens and managed to cross the borders, for the city was on the spotlight. Cacao Rocks is one of the most popular and acclaimed street artists of his time, also involved with film, writing and sculpture. He works within the parameters of figuration and abstraction to express his impressions and emotions. Following names that made it abroad Cacao started also from that same basement in the multicultural area of Psirri, in Athens (where he still works and resides), which serves as a studio and a gallery for young street artists who want to focus on their art. In fact, this basement is the main core of a Block Art, as it is its name – a block at the Psirri neighborhood full of art studios, exhibition spaces, galleries and a gift shop.

He has been painting the streets of Athens for –at least– the last six years, leaving behind distinctive works, or just his tag “Cacao Rocks”, making everyone wonder who he is. Last summer, Cacao held his first solo exhibition at the gallery DIO HORIA, at Mykonos island, entitled Les Cyclades Electroniques: a series of paintings not only on canvas, but also on huge amphorae, drawing inspiration from Cycladic architecture, the rich colors of the Greek sea, the force of the winds and the brightness of the Aegean sun. Although if you have a closer look at his work, you will see that the choice of colors isn’t random. Les Cyclades Electroniques don’t depict some kind of cheesy worshiping of the beauties of the Greek Islands’ scenery, but are reminiscent of a photographic negative. Consider that.

Then an exhibition in Zurich followed. When we contacted him, he was on his way to the US, visiting the University of Michigan to paint a wall in downtown Ann Arbor as part of the Global Graffiti Project, a partnership between the Institute for the Humanities, the Modern Greek Program, and the History of Art and also give a lecture on the street art scene in Athens, its highs and its lows, and the uses of street art as a ​​powerful form of expression and communication. This is his moment, no question. 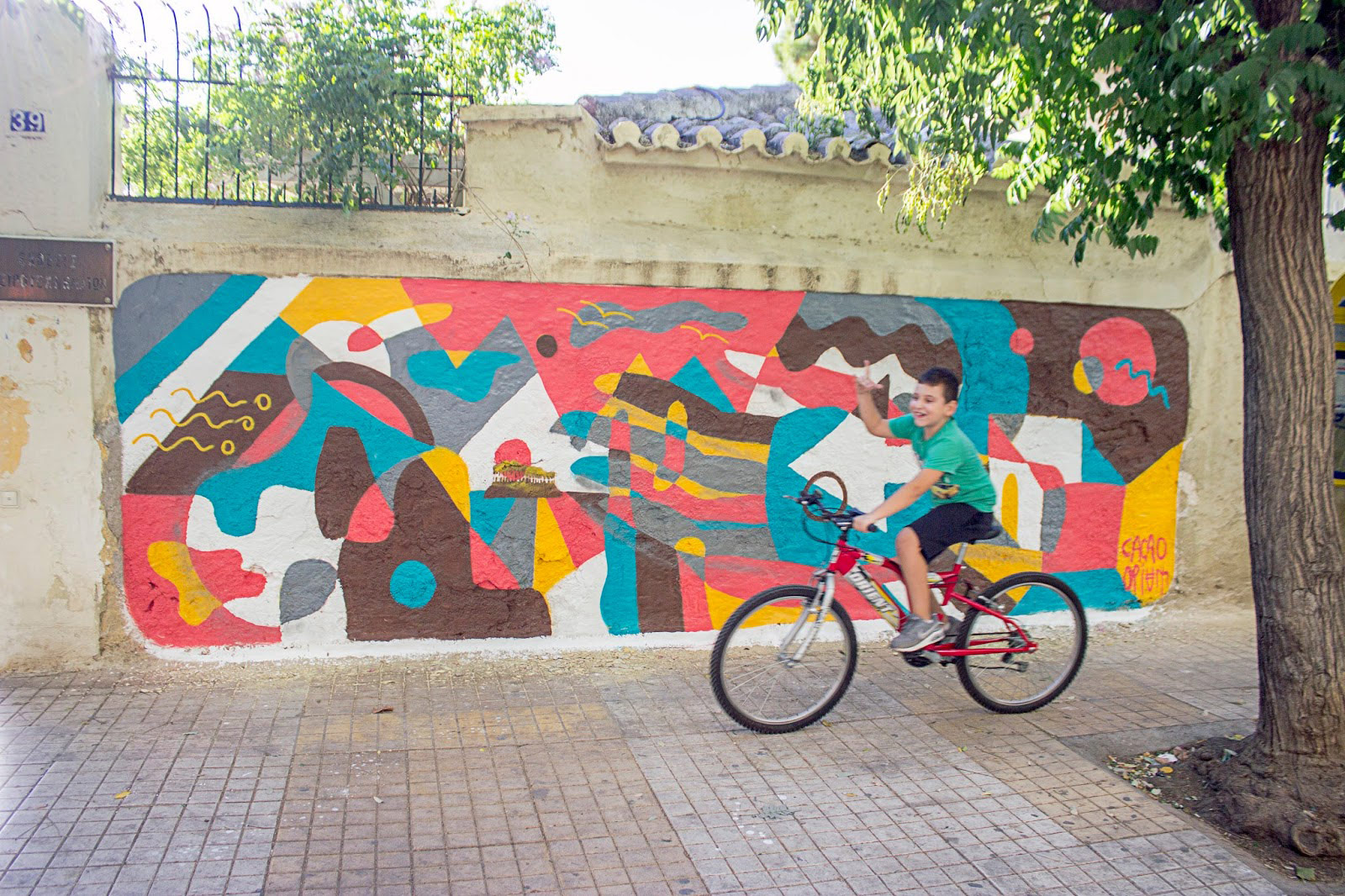 First things first! Tell us a few things about you, so we get to know you a bit better.
I grew up between Piraeus and Corfu. My mother is French and she married my dad when he went to Paris, to get away from the Junta back in the ‘70s. When I was 12, I started graffiti and skating, but I wasn’t good at any of it. Eventually I took up graffiti, but I kept skating for fun! At 18 years old, I went to the Naval Academy, but I gave it up soon enough, I took off to Bologna, Italy for a few months and then I got back in Athens, to study Philosophy. That was the time I traveled around Europe by train. I was broke and sleeping on the street. After that experience I began to get involved with street art and that was when Cacao Rocks, was born… Before that, my tag, was briz.
I’ve done plenty jobs such as delivery boy, salesperson, operator at a call center, until the time I won the first prize in a photography contest and got a scholarship to study Video Art and Photography at Focus school in Athens. After all these I went to the army and when I got back, I focused on street art. Actually, I had no other option, because I was unemployed. Since then, I have participated in numerous exhibitions in Greece (in its finest museums and cultural centers, such as Benaki Museum and Onassis Cultural Center), Italy, Belgium, UK, Mexico… I can’t even remember where else I’ve shown my work! Many are the publications of my work on foreign press, like in New York Times, ΒΒC, ΗHuffington Post, mostly due to the Greek crisis what brought all the attention to Athens.
I have also had a failed marriage. Currently, I am at Ann Arbor, US painting a wall opposite the Opera House of the city and I’ll also give a lecture at the University of Michigan for Street Art in Athens.
Lately, you choose as a theme of your work the Cyclades. Why is that and… have you come up with the next one?
The last two years I have had Cyclades and Greece as a theme of my works, yes. That happened when I attempted to move to Germany. I stayed for almost a year and I felt so homesick. I was so quaint at the time. I was listening only to Greek music, I was watching Greek films, reading Greek poets. I was a mess, but I‘ve also done a lot of work there. Now, as for my next theme… I don’t know. I write a lot and I want to do a big performance. But, when it comes to street art, I surely want to change my palette, though my “blue period” is not over yet. I haven’t shown all my work.
Last summer, you had your first solo exhibition in the island of Mykonos and recently you presented Myths of the Near Future, a new series of work at a solo exhibition in Zurich. How all these happened?
I’m quite lucky at the moment to be honest. Mariana Vranopoulos, the owner of DIO HORIA gallery in Mykonos, discovered me and the exhibition in Zurich happened when a young curator, from Borgia – Art, Italy, came across my work in one of his trips. 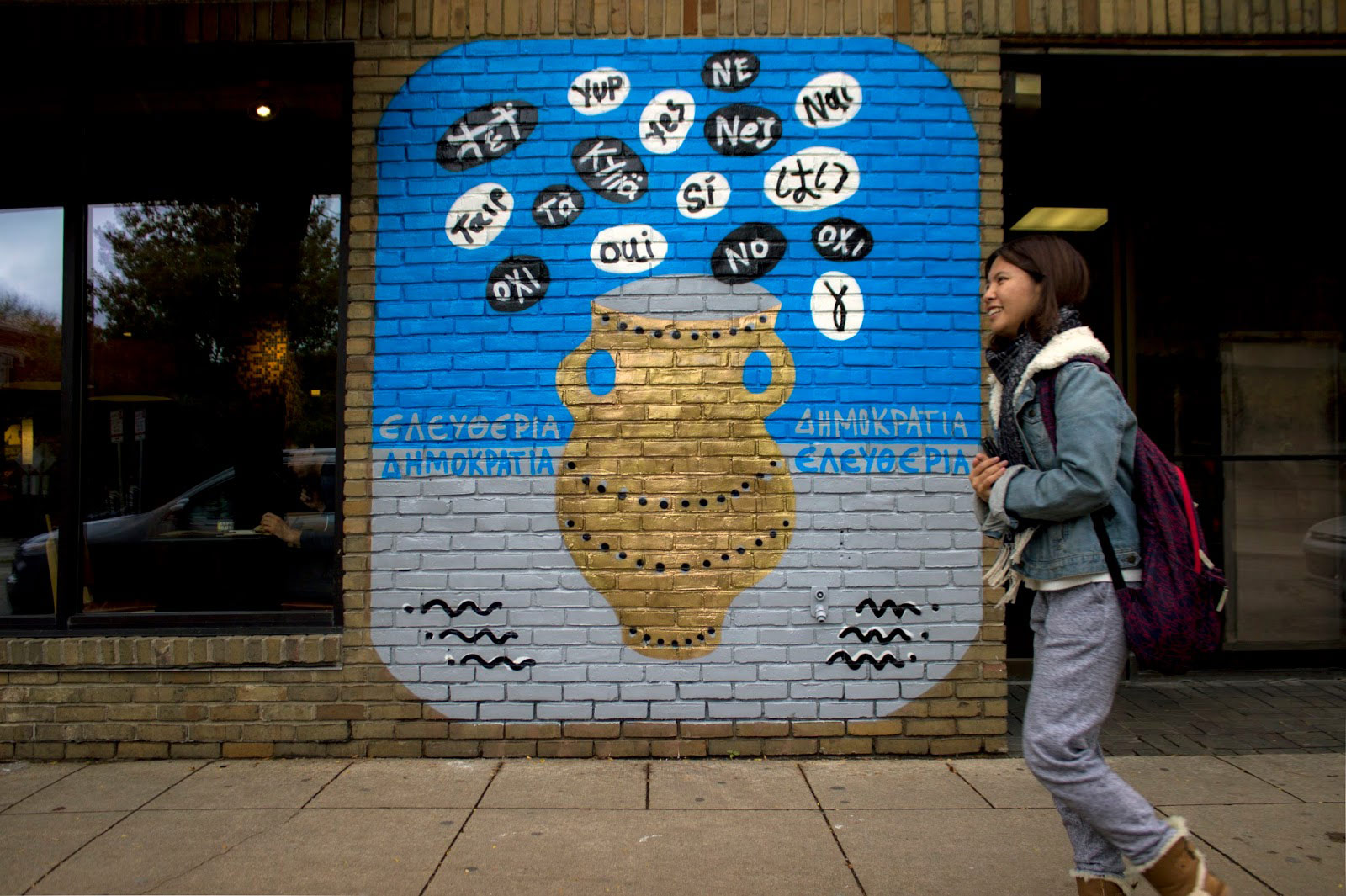 What does the transition from a wall to a canvas looks like? Do you feel restricted or released? Do you approach your art in a different way?
A wall is game, is freedom. A canvas is work, is something that will last forever or at least or many years and it has a value, someone can buy it, so you have to use the best material and best technique you got. At first, I couldn’t work on a canvas for over one day. I did one session and then leave it, just like I do with the walls. It took me two years to work properly on canvas. Now I work on a piece for months. Painting on canvas has it restrictions, but it takes me places.
Do you believe street art is more developed in Greece, than in other European countries?
I don’t know if it’s more developed, but surely is a lot! Here in Greece we have more graffiti and street art works than anywhere else I have been in the world and I have traveled a lot. We have great and acclaimed artists, apart from Faitakis, Vasmoulakis, Ser, B. Woozy, who are some of the oldest, new artists, such as Blaq, Τaxis, Nar, ΙΝΟ, Fikos WD and Dreyk, are quite known abroad. We have a powerful scene. However, I think it could be more united. Also, there is a new Athenian style emerging right now, from unknown artists, like ANUS and ΝR4T. We are doing quite well here in Greece, in street art.
Have you ever painted in other European countries yourself? How was the experience? Do you feel freer in Greece?
I’ve painted in Germany. Too cold and fear. I’ve painted in the UK. Apart from the rain, they tried to steal my camera there. I’ve also painted in France, which was tough. One of the most fantastic experiences I’ve had was when I painted in Cyprus, on the Buffer Zone. Now I’m painting in America and it’s awesome, but nowhere is as good as it is in Athens.
Where would you like to paint and still haven’t the chance?
I’d like to paint in Crete; I will go soon to see my niece that is just born. I hope to paint a wall and skate a bit. 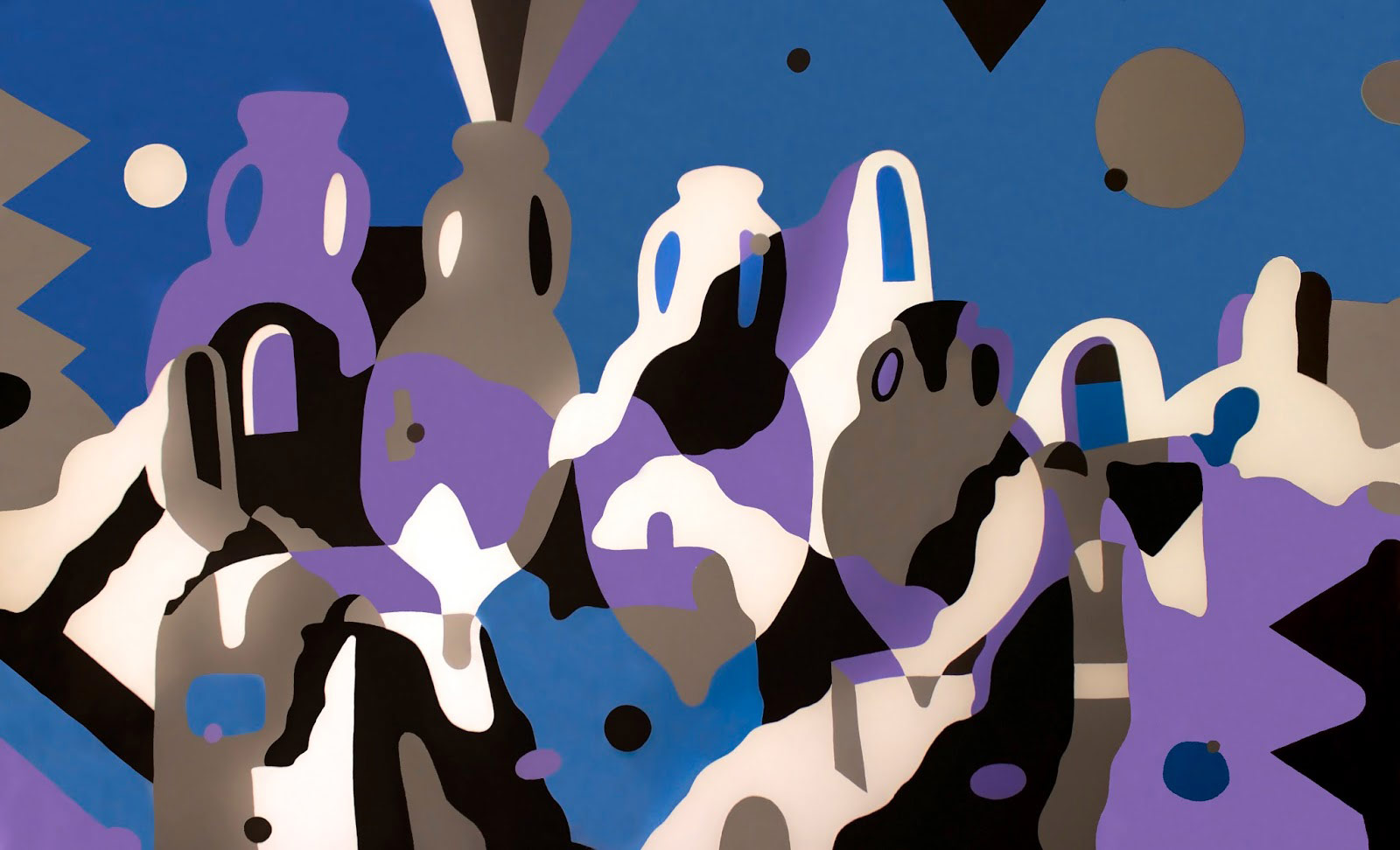 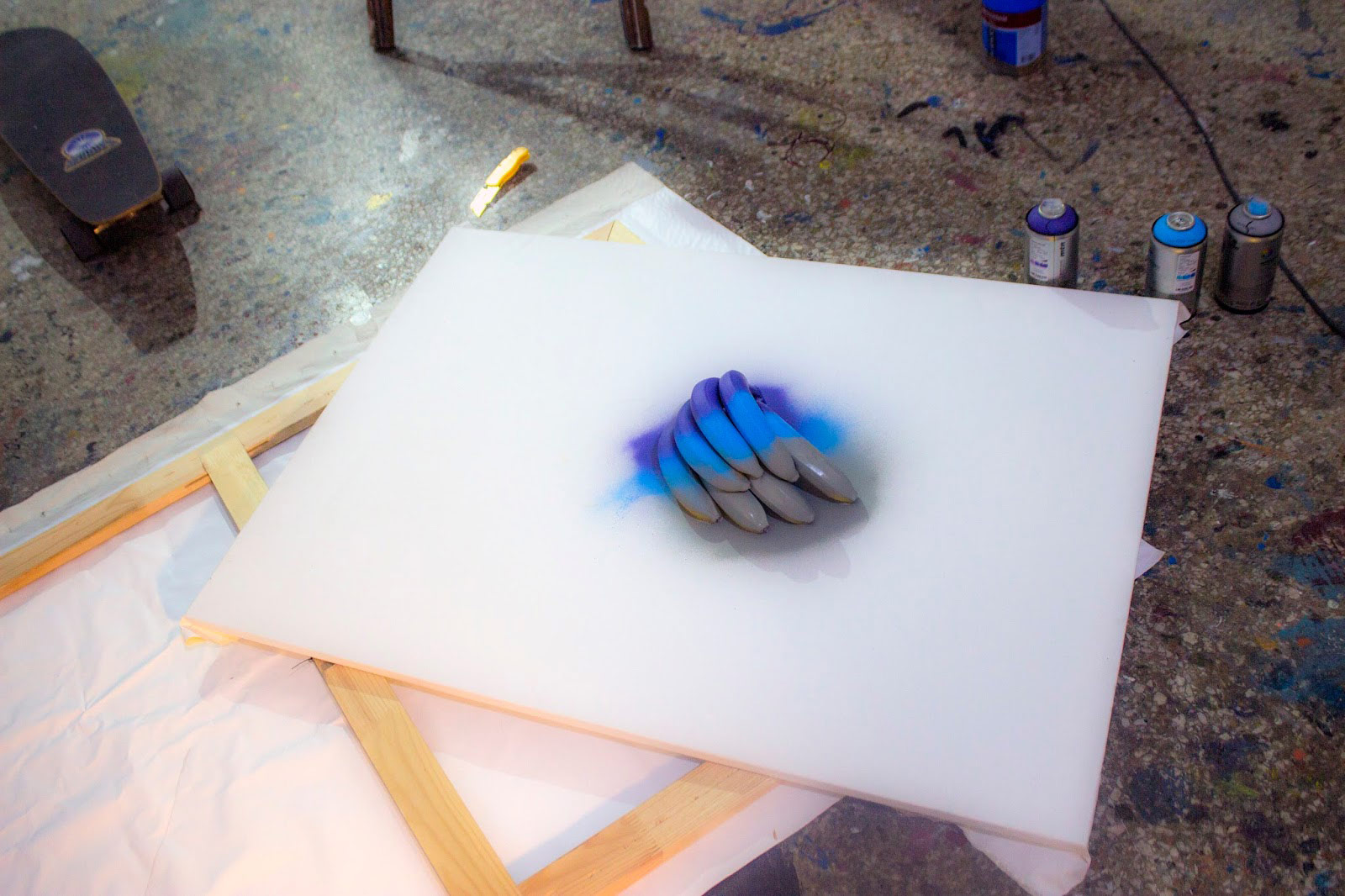 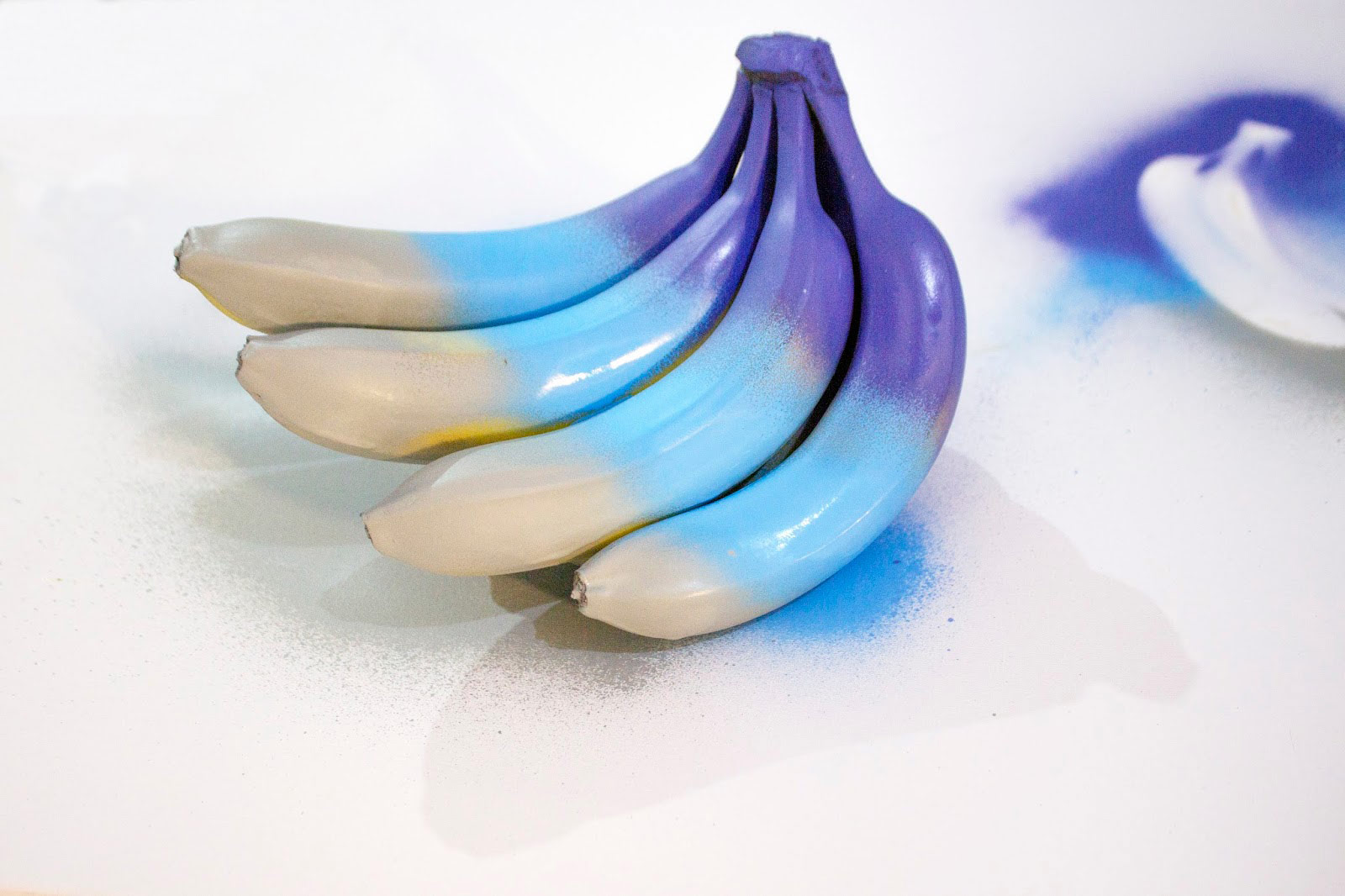 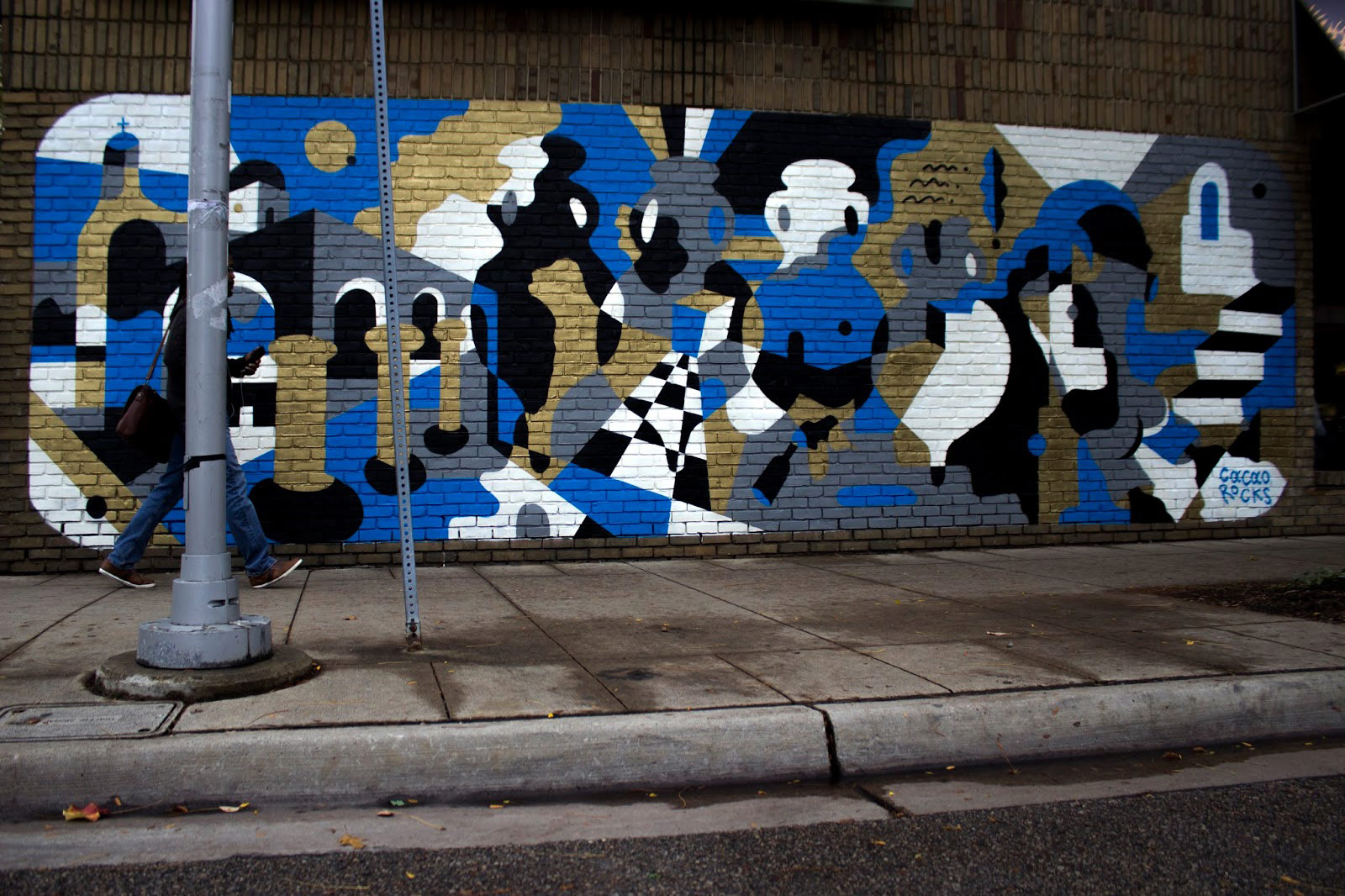 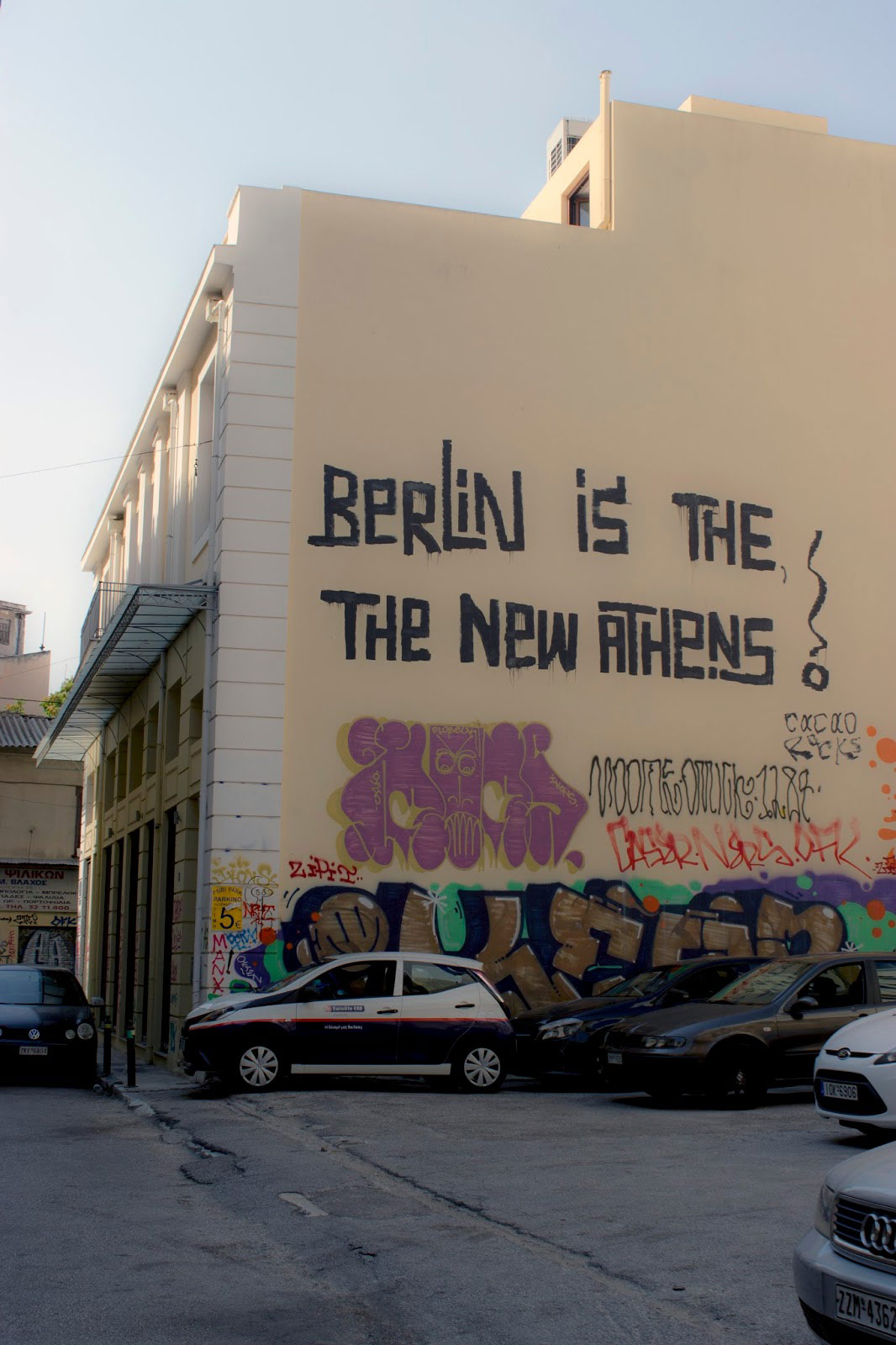 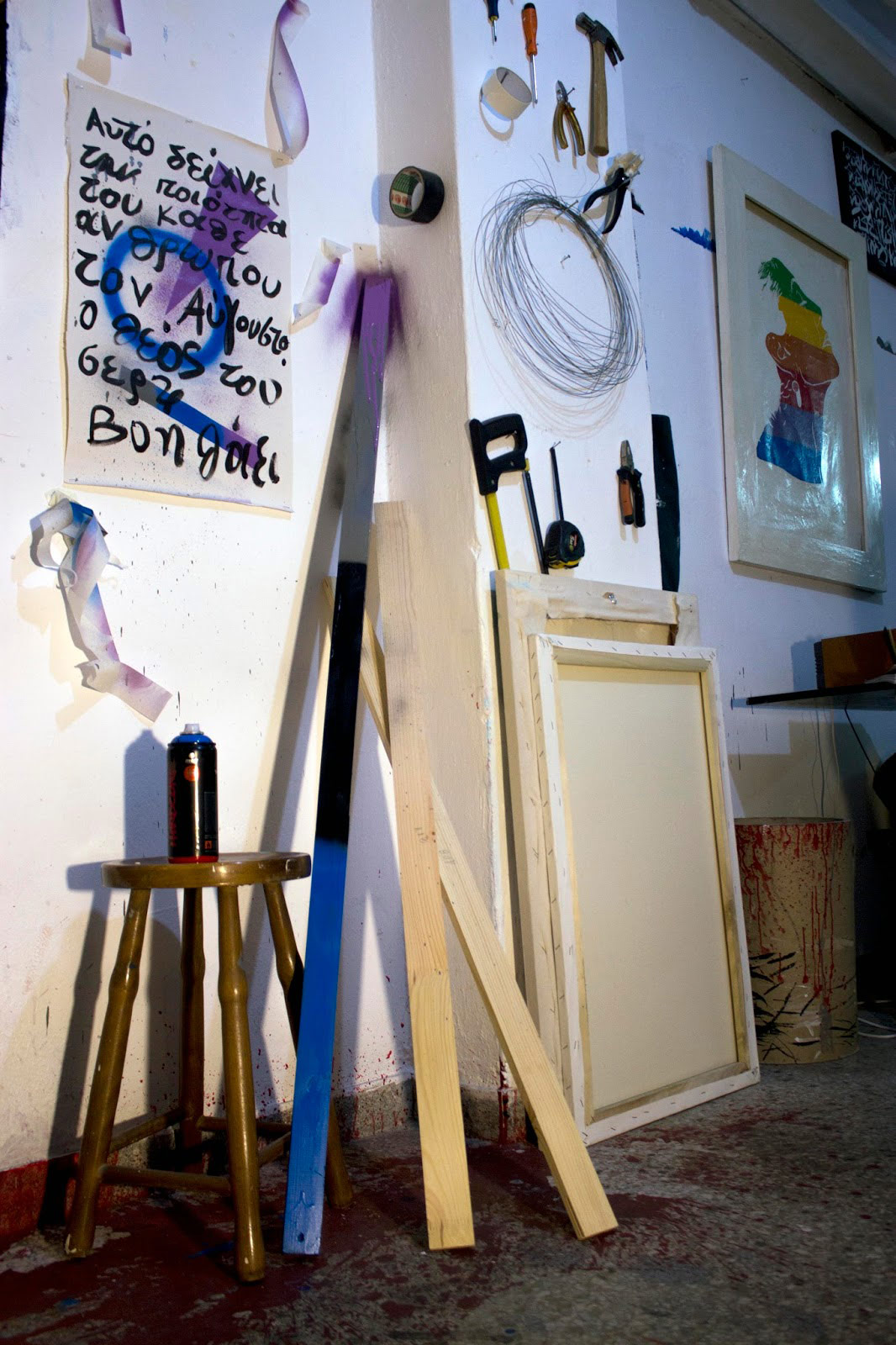 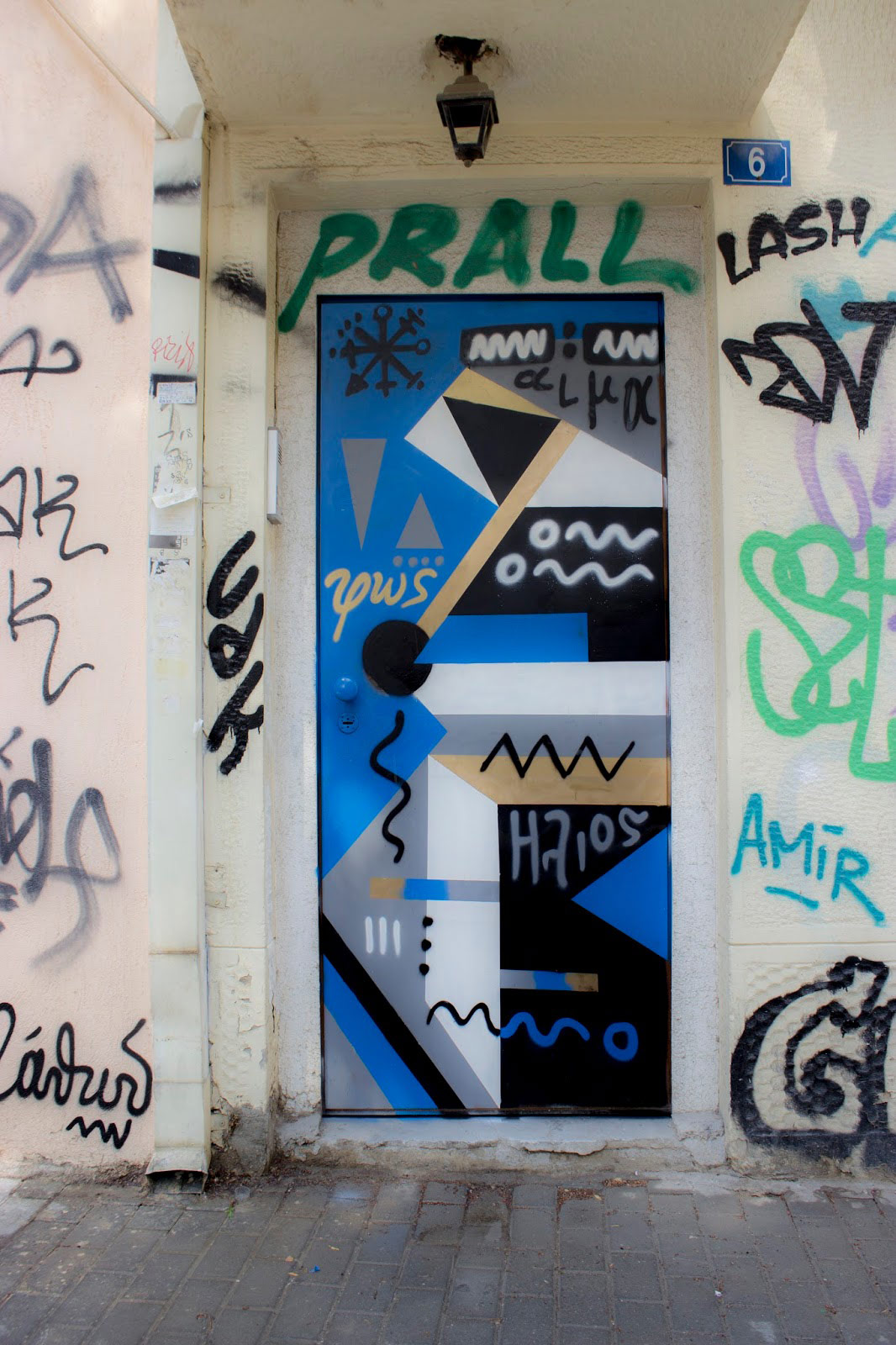 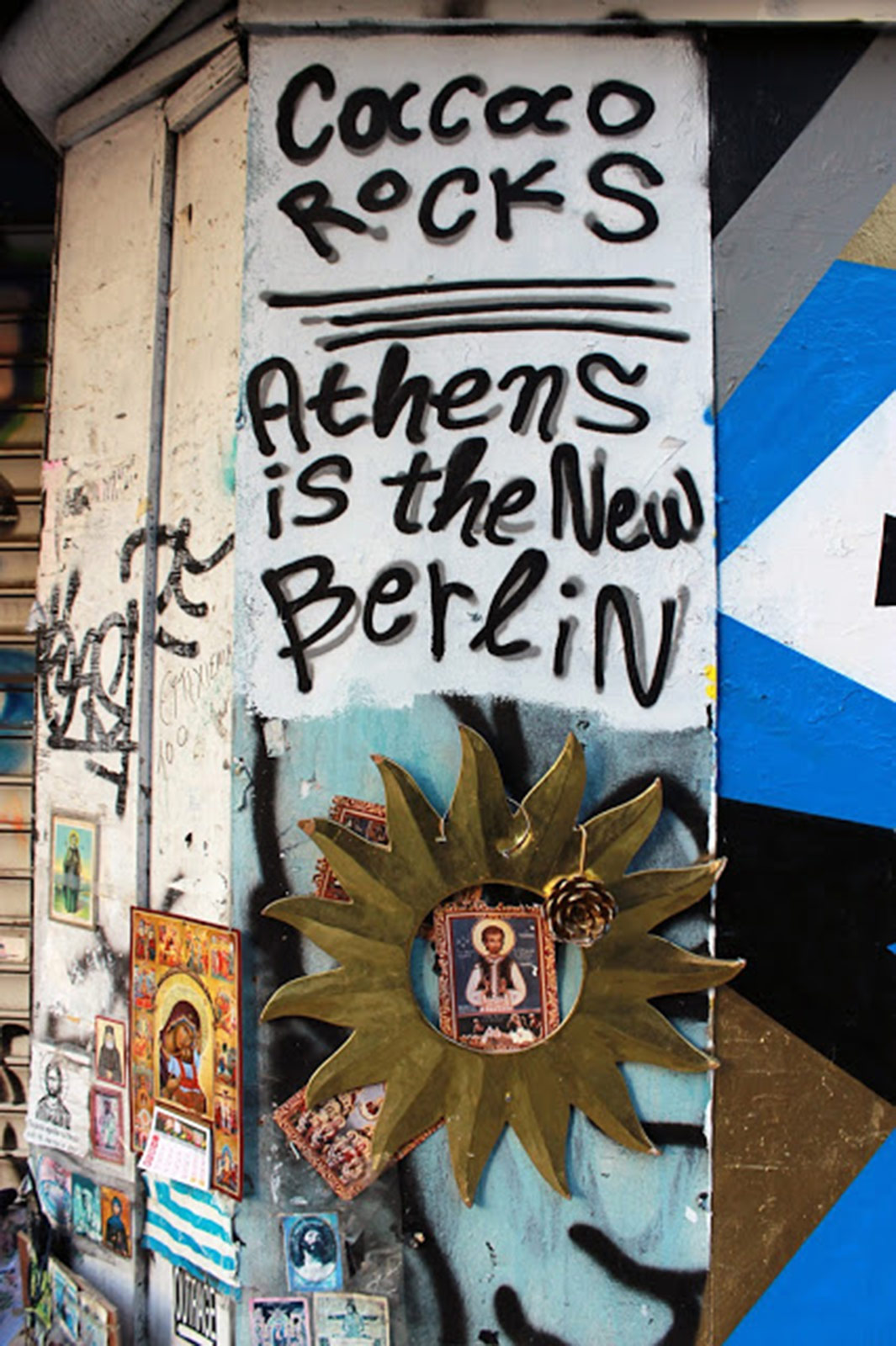