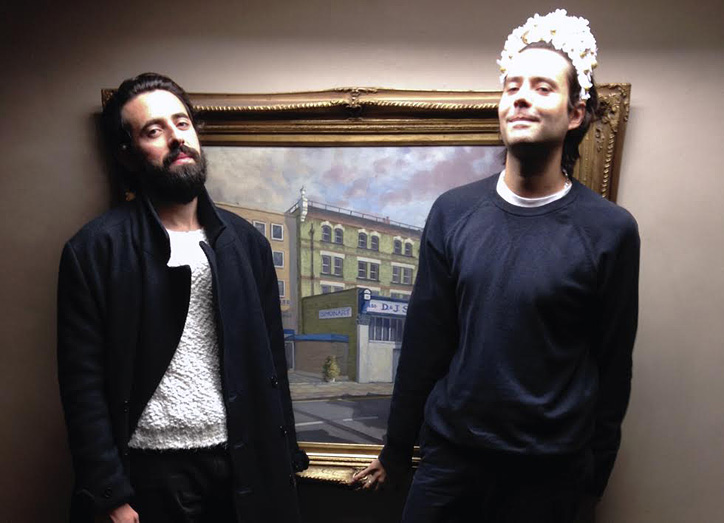 What’s next? What’s next? What’s next? Fashion’s rhetoric questions are stressful to say the least, and the constant combat to conquer the new and protect the young is, after all, boring. In the midst of it all, something happens and we’re obliged to stop and look: the newest release of Buffalo Zine, a publication that, in this third issue, reunites us with our long forgotten inner child and makes us dream with our wildest maturity. To sum up this holistic tale in a few words is quite a challenge, but we didn’t want to lose the chance of talking to David Uzquiza and Adrián Gonzalez-Cohen about the apple of their eye.

How would you explain to a little kid what Buffalo Zine is?

You reinvent the concept behind Buffalo in every issue. Or don’t you? What’s the constant of the equation?

Actually, yes, we do. But it’s something that comes naturally. Every issue is like the first one. That’s how we work. That may be the constant.

In past issues, you’ve been influenced by different kinds of publications. Which were the referents this time?

Children tales, books we read in our tweens, books we bought in old stores, those we found in libraries, decor magazines and encyclopedias, cooking books, sweets and cakes boxes, The Victorian Ornament handbook…

Your new issue has been defined with the idea of "timeless present". In the fashion world, is time relevant? How do we know what’s ‘now’ and what’s ‘past’ and why should we care?

There are trends. You know, in design, in fashion… What we tried was to avoid trends or a very modern approach. And it wasn’t difficult to do, actually. It came out very naturally, we didn’t need to get obsessed with it. And we love many trends now, but this time, this has been our choice.

Why did you feel talking about this "timeless present" idea was important right now?

We were looking for a place in time that was in between – not past and not present either. It’s like your memories, you think about your childhood and it’s not 80s styled or whatever. That’s just in the pictures. But in memories, past times are not dated. And we looked for that.

You’ve shot archive collections. Is it a refusal of the current state of fashion or a way of reinforcing the idea of durability?

A way of reinforcing the idea of durability.

Mandatory question: how were you when you were kids? Which archetype of child did you incarnate?

Adrian: I was very into adults, always around looking and listening to them – while my mum asked me to go play with the other children outside. I was the sissy boy, I suffered some bullying and stuff, but I don’t see it very dramatically – I think I dealt with it in a really cool way. I guess I had a lot of love and respect from my family. I was obsessed with Maria Gripe’s books and with dressing up. And my mum and friends say I was very funny. Big interior world. Although I had a horrible voice, I think.
David: I think I was the loner type. Not many friends, kind of aloof. Pretty "know-it-all" and obnoxious. I was a mummy’s boy, well-behaved, quiet and polite. Bored with school and looking forward to the summer, to go camping with my family to an exotic destination like France or the beach.

One of the ideas your issue and yourselves suggest is that there must be some kind of essence we have as kids as well as old people, something "deep down". So, do we ever change? Is there some kind of transformation?

Adrian: Personally, I think I’ve always been the same, since I recall. I remember thoughts I had when I was at school or the things I liked in people, everything’s pretty the same. I’ve changed, but just in the surface.
David: I guess the experiences you go through in the first 10 years of your life shape you forever. But I believe transformation is possible and it occurs for some people. Anyhow, it’s just that most children and elderly people don’t take themselves too seriously or are limited by fear of the future or of fucking things up, or of saying or doing the wrong thing. That gives them the freedom to be more playful, more themselves, more authentic. I always admire those qualities in grown-ups.

In this over informed society in which the cult to teenagers poisons both adults and children, does childhood still exist? Can we still think about it in the same terms we used to twenty or sixty years ago?

Adrian: Definitely childhood exists. That’s something you cannot skip. What I think is happening now more than ever is that teenage years are kind of eternal. I remember when I was younger our parents looked like adults. People over 25, or even less, looked like adults. That’s something I still can see a bit in my lil’ hometown, in some cases. But most of the people now in their 30s or 40s look (or act) like eternal teenagers. It’s like nobody wants to be an adult! I guess now you realize you’re an adult when you’re actually old, like over 60. It might be very scary, hard and painful to get to that point in that state of mind. I think the next big thing needs to be to give visibility to old people. After the gender cause, that’s the next one. And not in an advanced style or gimmick way. Give it the grandeur and dignity it has! Hopefully we are all gonna get there.

The aesthetic throughout the issue –as well as the general aesthetic when it comes to children’s books– has a bold, macabre tone. Is childhood darker than we normally think?

Adrian: I’m glad you say that. I think the issue is very tacky and cute and faggy and tralala, but definitely there’s also the witch, the wolf, the evil. It’s natural and it gives balance to everything. You wouldn’t see the light without the darkness to compare.
David: There’s this thing Lolo Rico says in her interview in this issue that I find very true: that children are not innocent. They have the capacity to deal with topics such as death, eroticism, and violence. They have indiscriminate sexuality. They do think about it. All of us have thought about how it would be to die, and we have thought with terror about death and about disappearing.

Your issue has the most impressive line-up. Reuniting all these people has been the best dream ever or the worst nightmare? How do you draw a line between Montserrat Caballé and Irvine Welsh?

Adrian: (Laughs) It’s been a lovely journey, with some nightmare nights. There is a lot of people that didn’t make it to the issue, but most of the people we approached were into it. Irvine Welsh was super generous. And the Monsterrat Caballé and Gala feature is an adaptation we did from a Julia Otero TV interview –with the kind collaboration of Julia herself. All these characters are full of grandeur and sparkling personalities, they’re people we would love to have a tea with, followed by some long drinks. Montserrat and Gala are very old and alive, and we wanted to celebrate them.
David: No need to draw a line between Montserrat Caballé and Irvine Welsh! They’re having a laugh together in this tea party. But the truth is the contents for this issue started arriving so, so slowly that at some point I thought we would never get anything done. We were asking some of our childhood icons and people we admire to contribute with some pretty personal things, so it took a lot of perseverance.

You have an eye for finding the most talented people out there, like Harley Weir or Lea Colombo. Which parameters do you follow when choosing the people to contribute to the issue? How do you detect the talent?

Adrian: I had a folder with all these young sort of “unknown” photographers that I’d found on the internet, tumblr, instagram… We really liked something very timeless, soft and kind of romantic about them that was very into the idea we had for the issue. This was spring 2014. We started approaching them, and they were very easy and nice, because most of them weren’t very “famous”. And because they are easy and nice per se, of course! During this past year they blossomed (obviously, we weren’t the only ones aware of their talent), so they’ve been like all over the place, in all the mags. I don’t know if they could have done it know, probably not. But we are very happy that now they all want to repeat! Most of the shoots have been done for months, they’ve been very patient. Thank you, guys!

I know this question is horrible, but can you imagine how issue 4 might look like? Or at least, do you have some kind of dream issue you’d like to publish?

Yes, we imagine the next one pretty well. But we are not telling you any more, my darling.

Guys, what do you want to do when you grow up?

We never stop growing up! 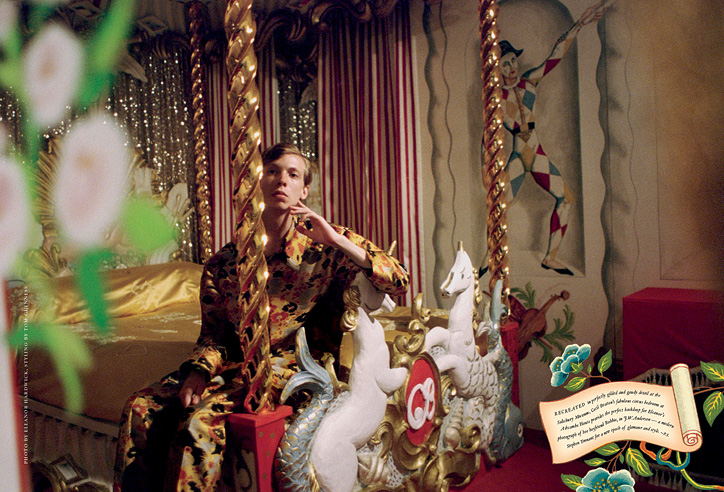 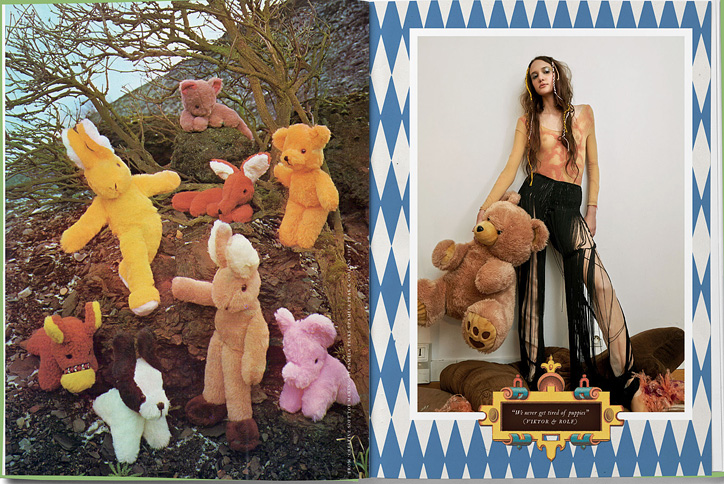 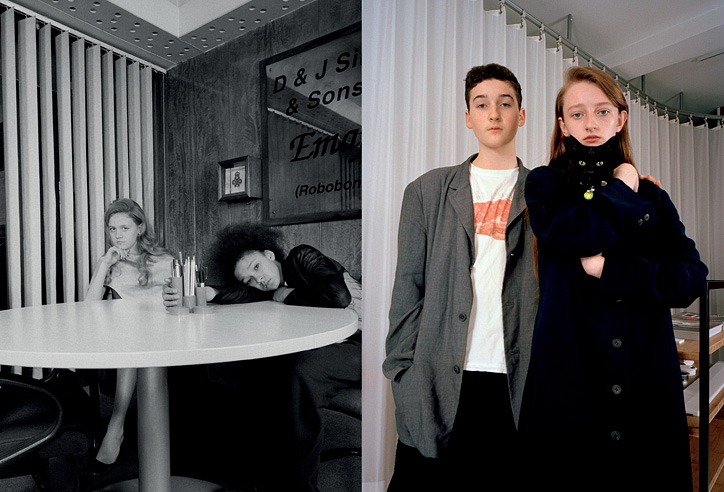 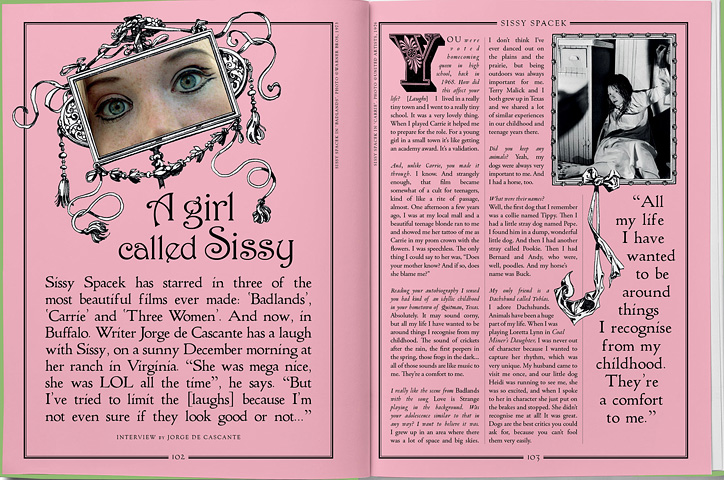 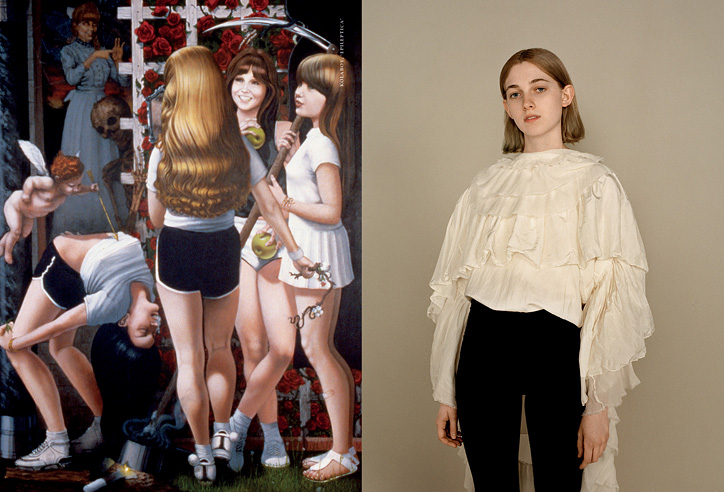 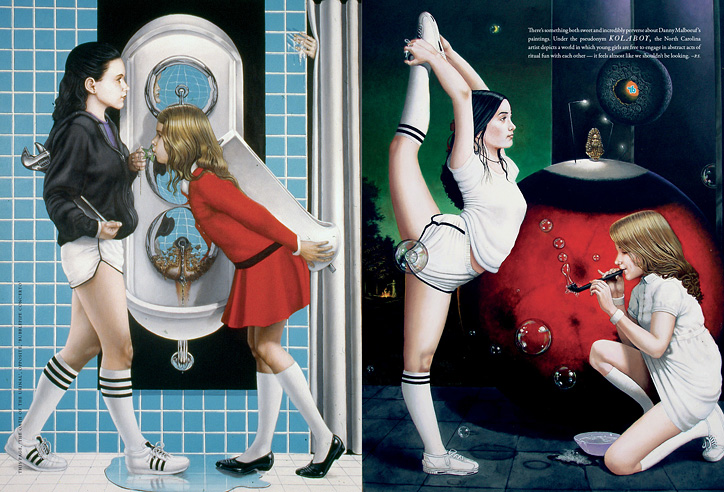 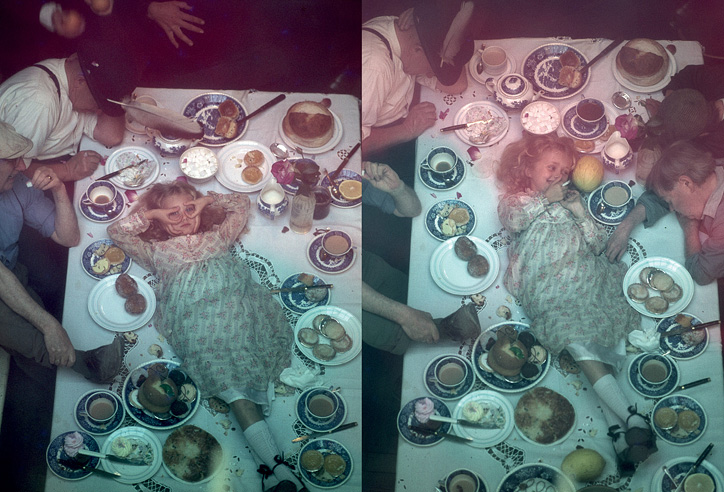 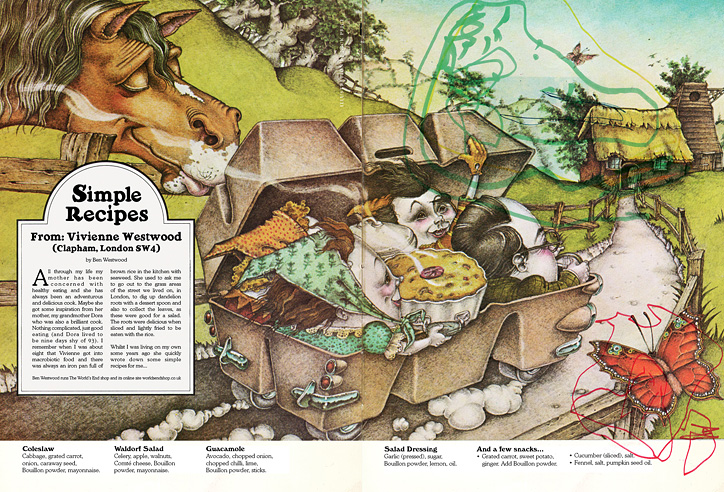 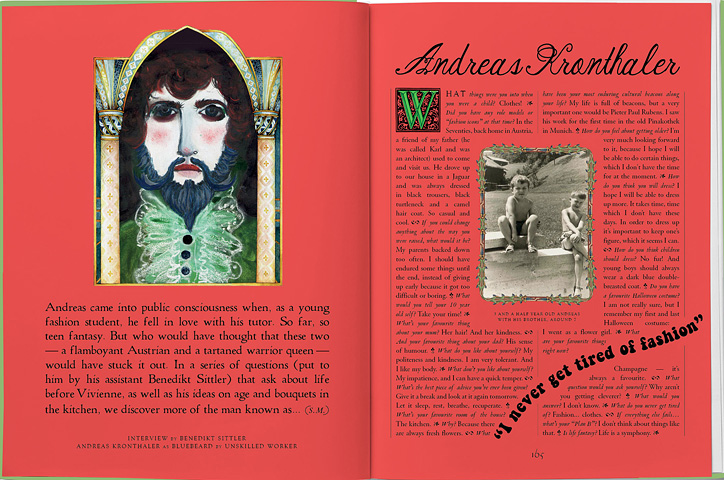 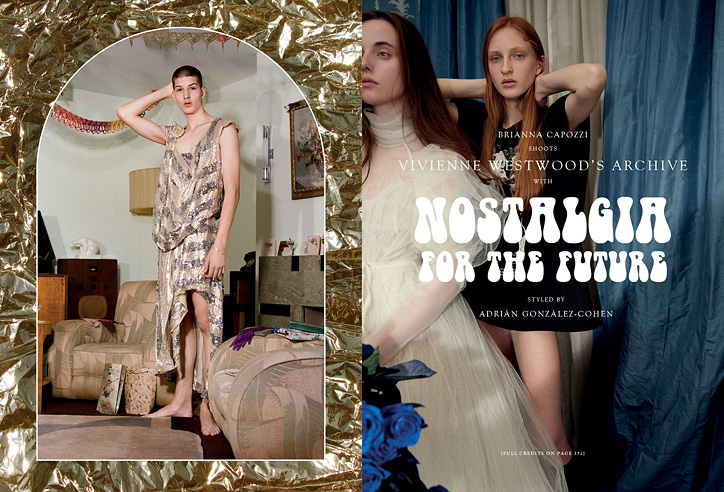 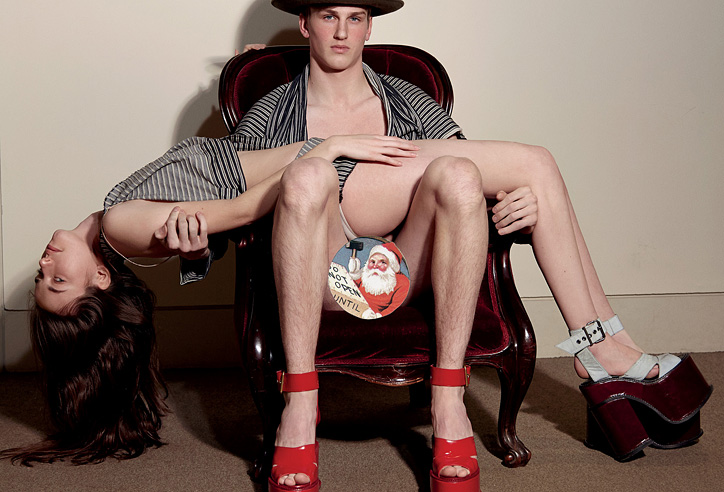 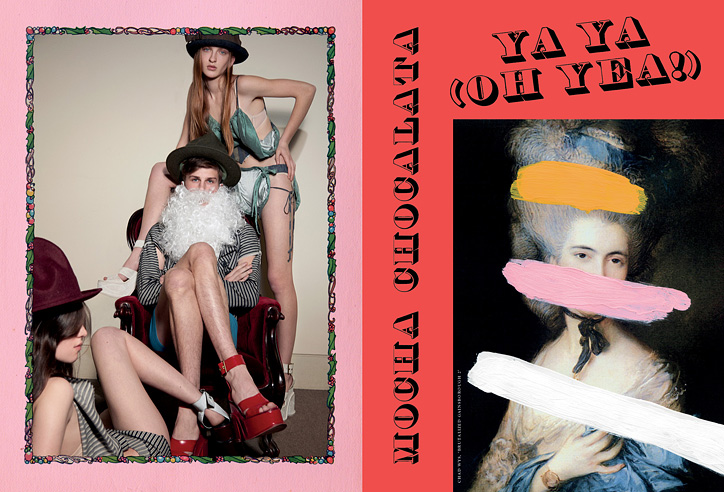 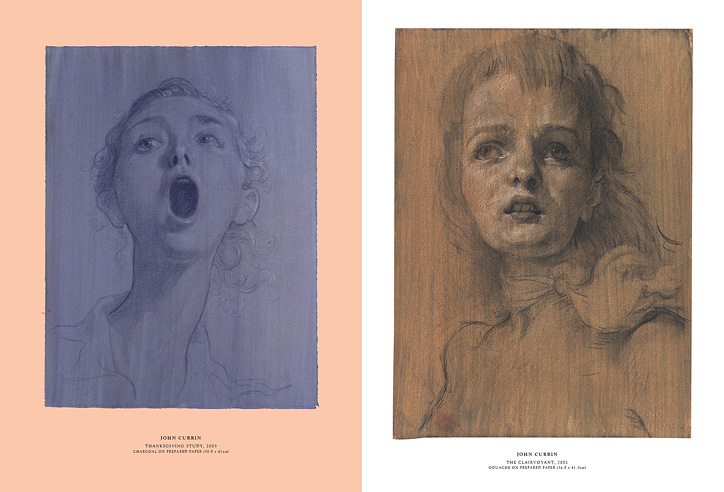 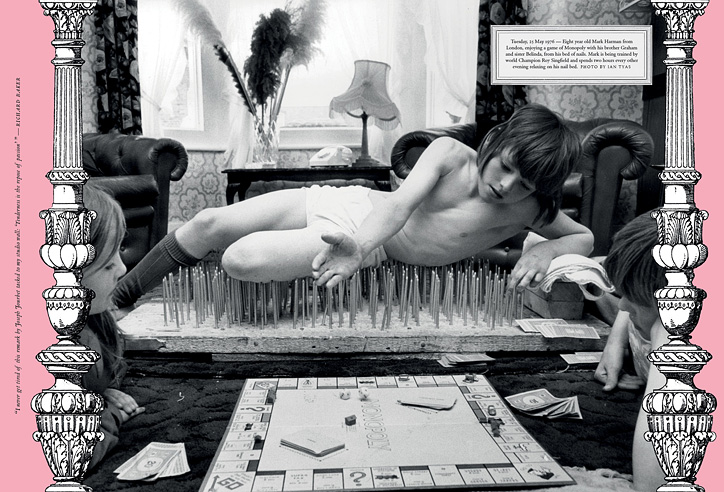 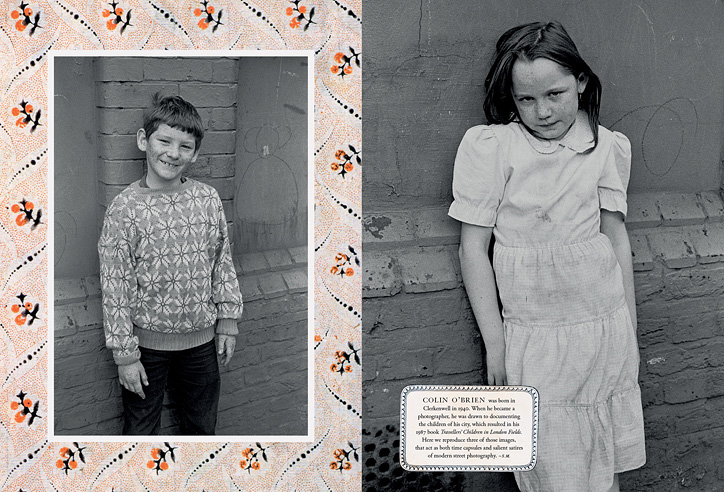 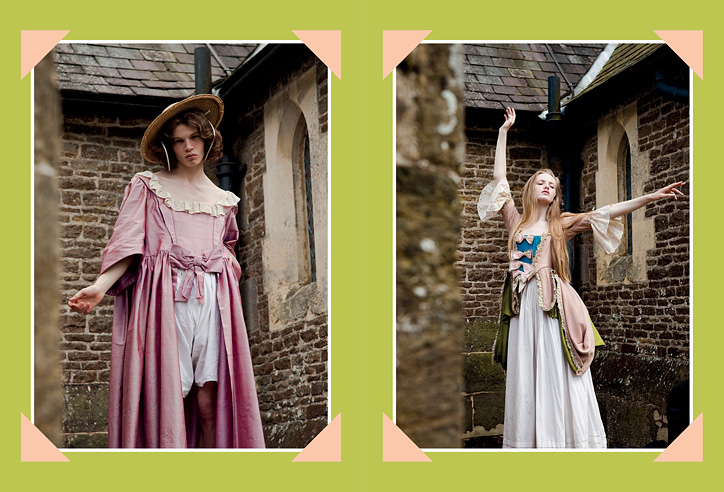 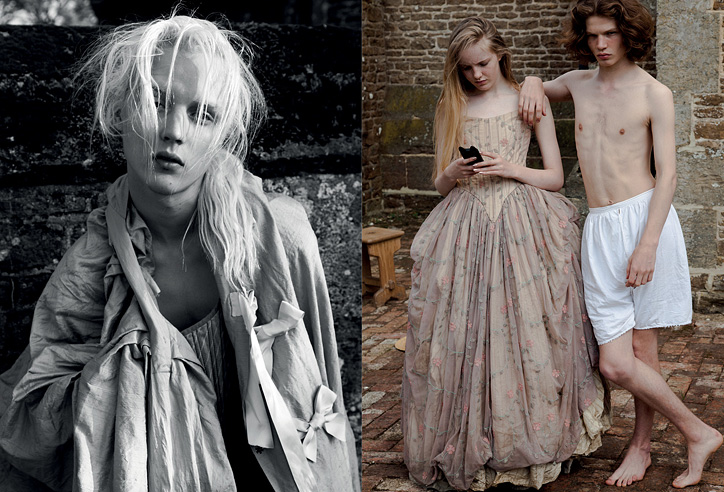 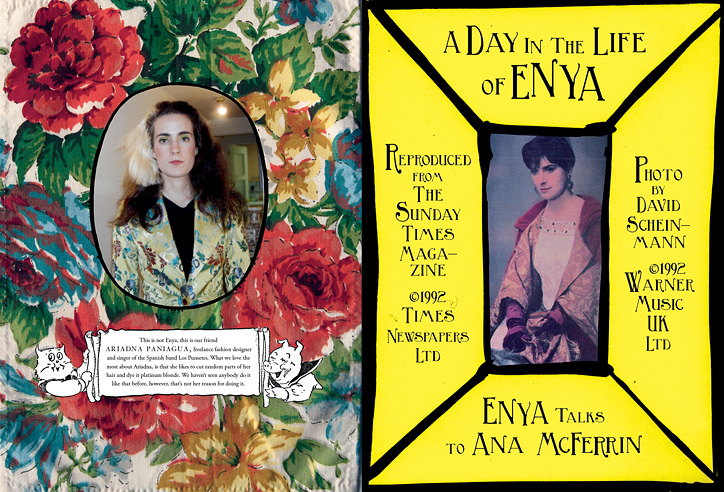 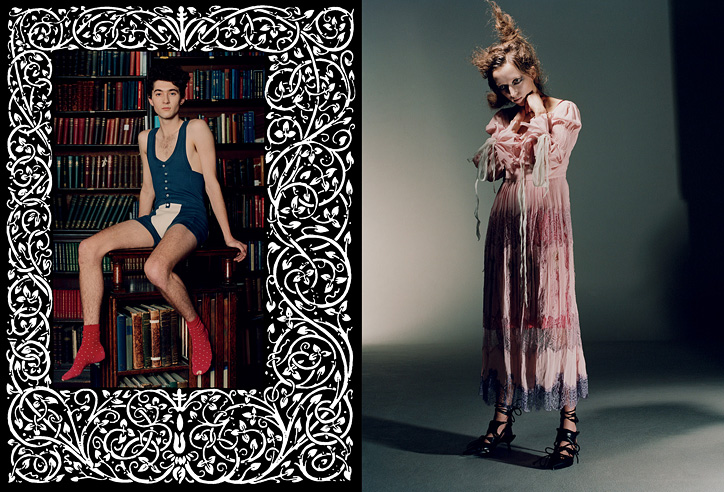 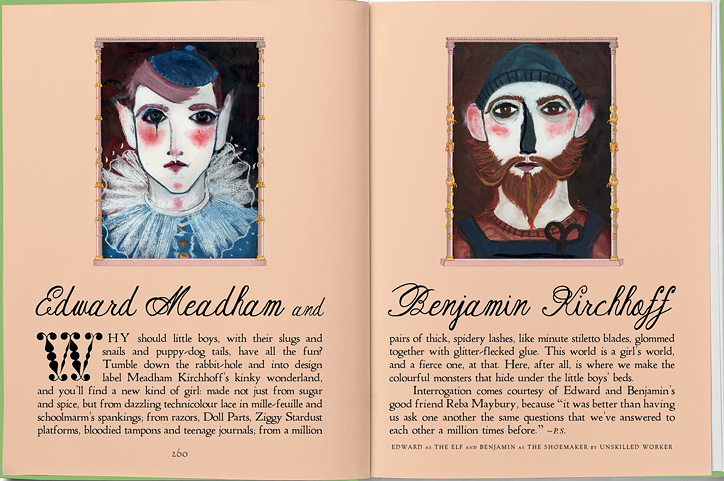 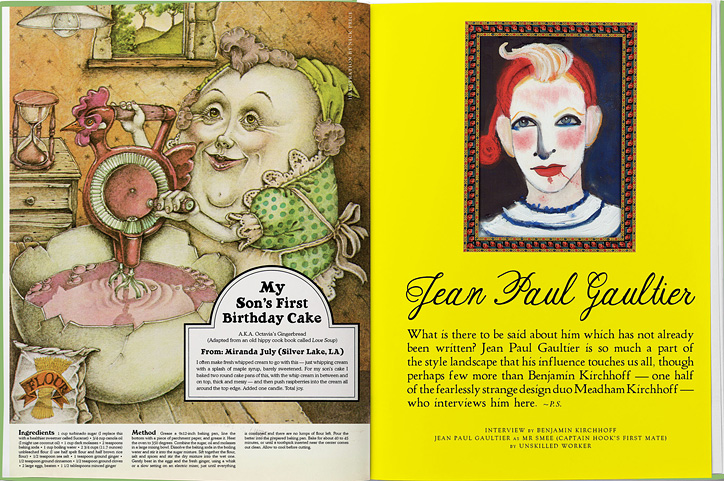 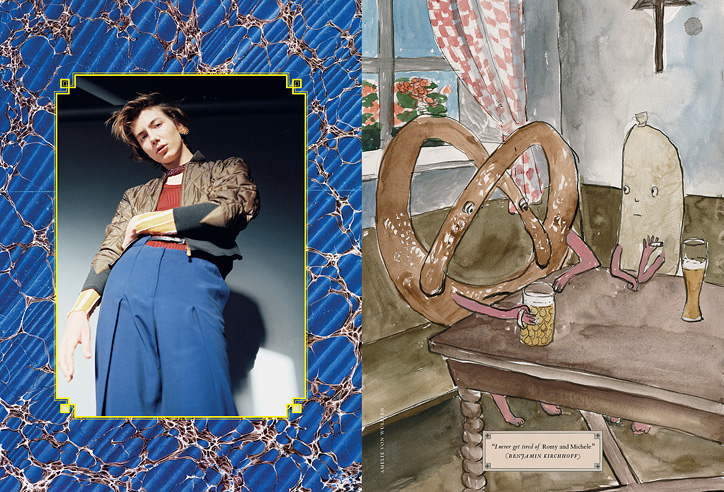 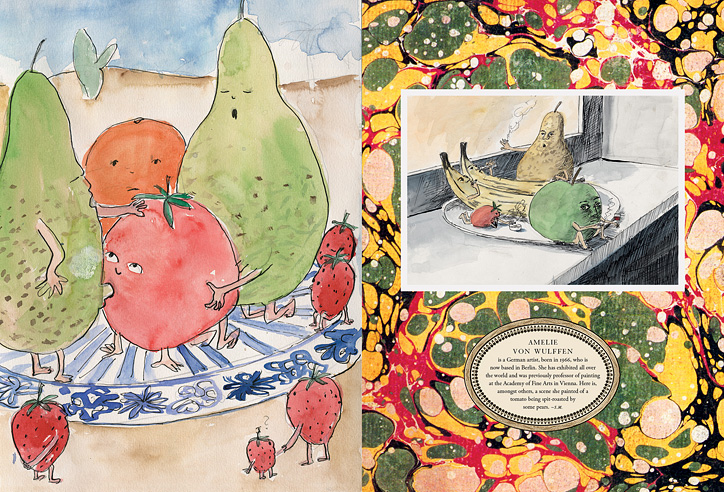 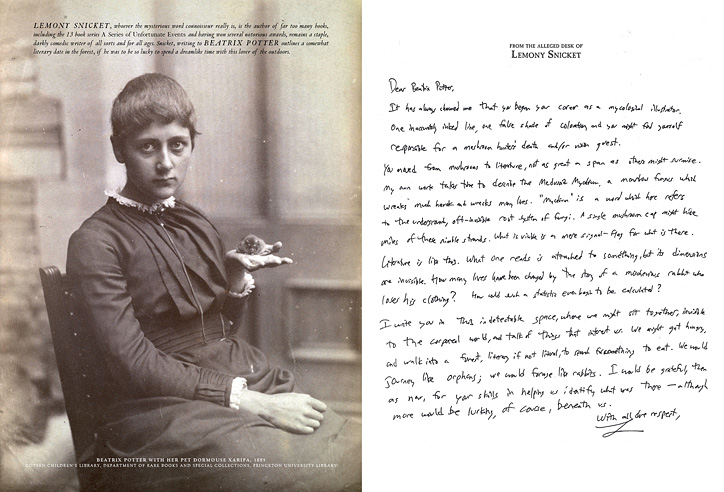 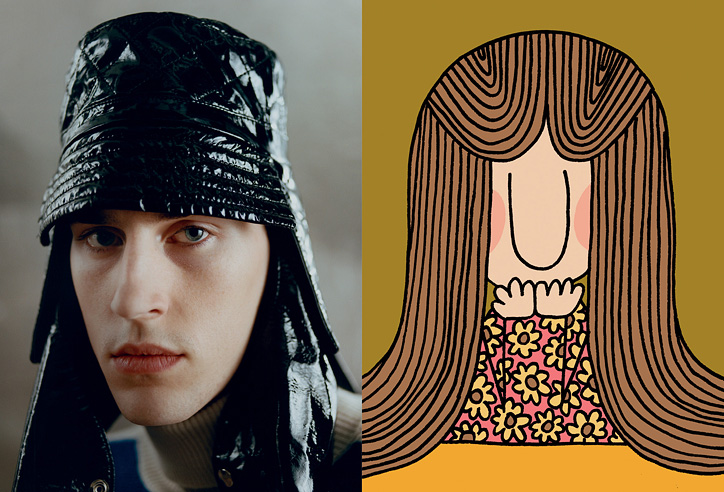 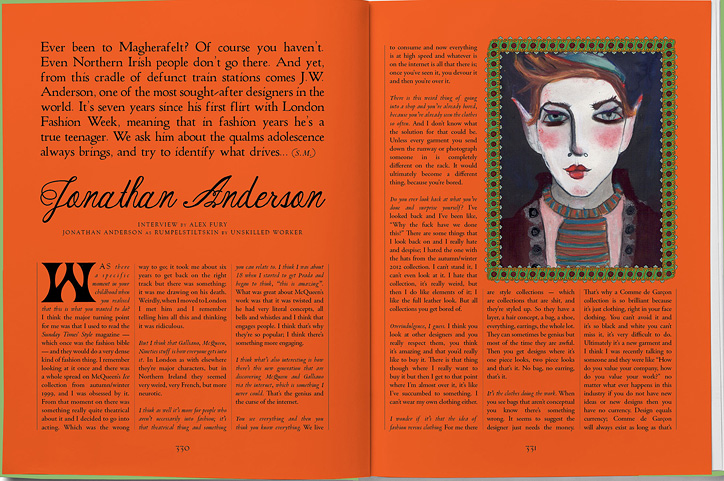 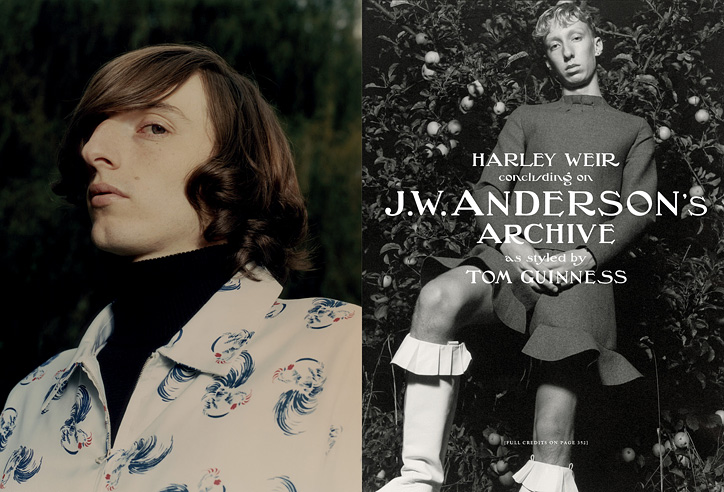 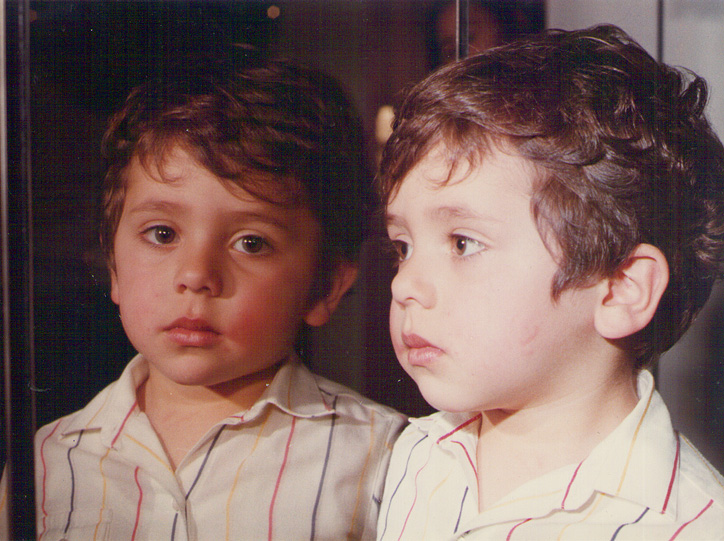 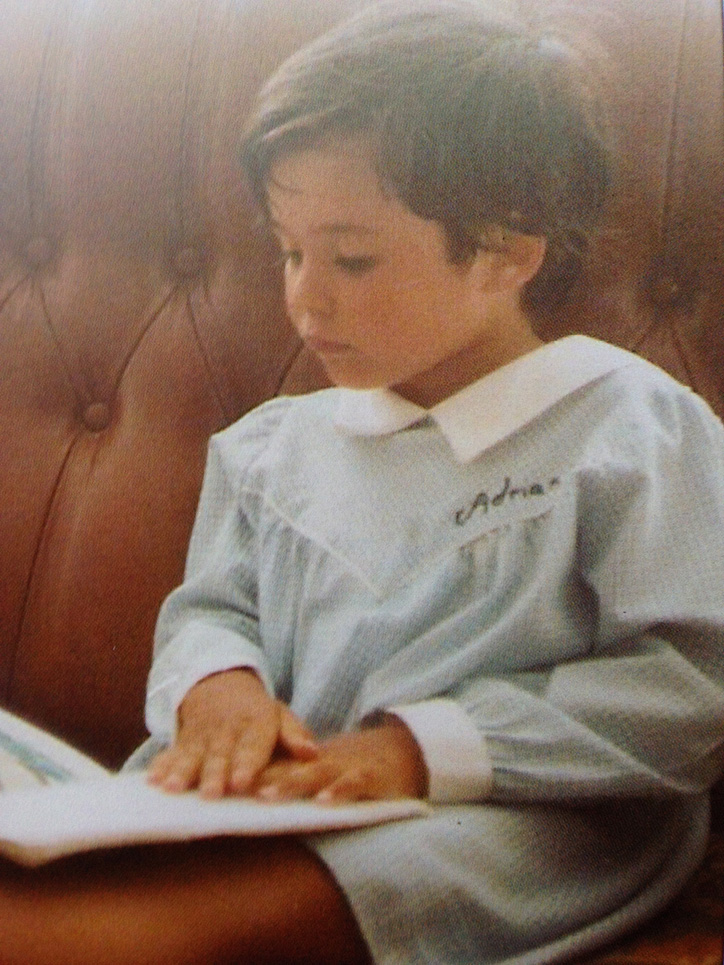