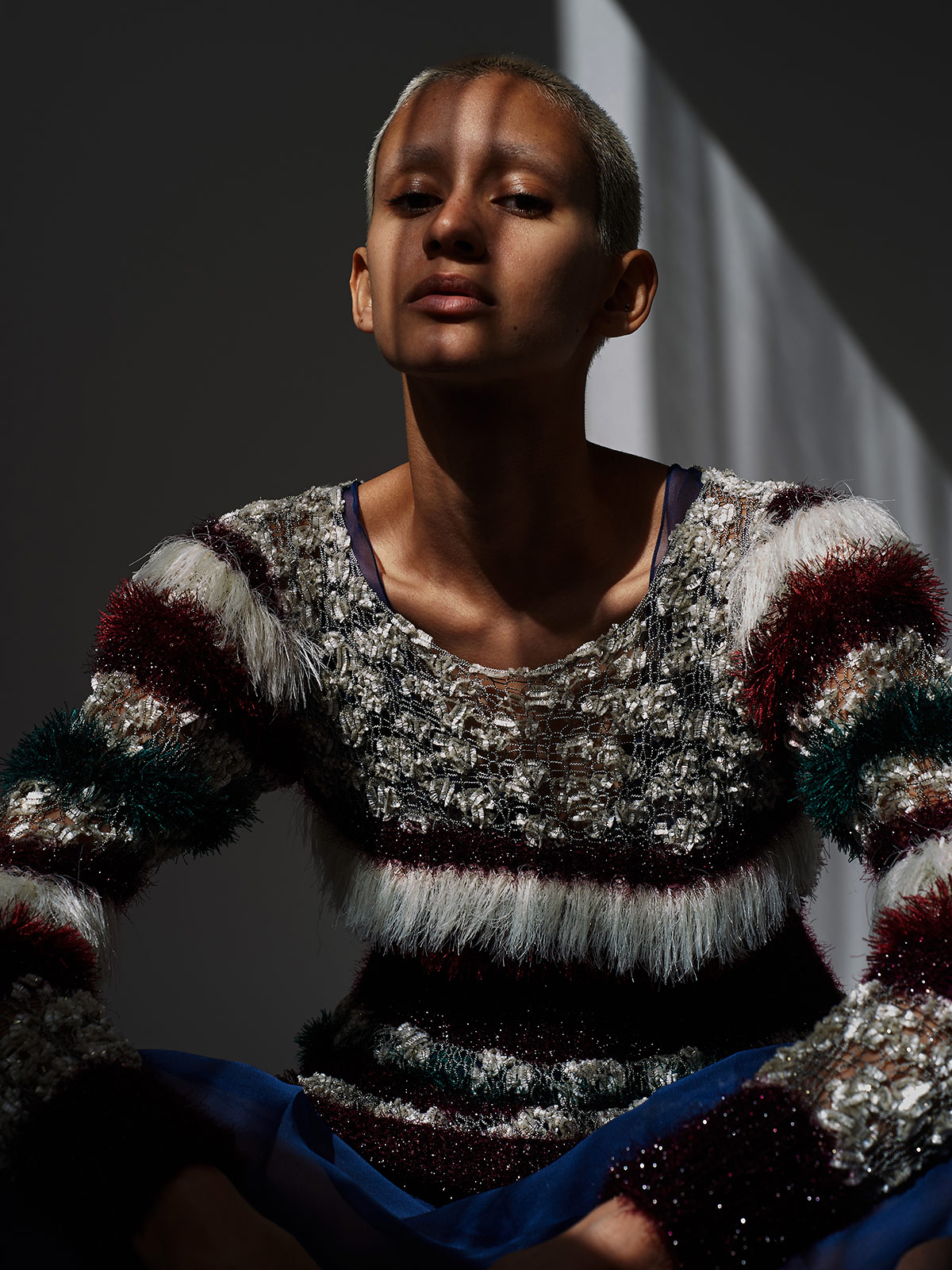 Harry Houdini, master of illusion, once said that the mind is the key that sets us free. To get to where we are right now, dragons have been slain, fears have to be confronted, desires must be met and released. If not, one will always continue making the same mistakes over and over again. And who wants to listen to a broken record? In a land where everyone chases the impossible dream to become the next film star, 26 year old Braina Laviena is walking on firm ground as an alien creature that was teletransported from the Caribbean into one of LaLaland’s most sought after models. Even though she’s been a muse to Kanye West, blessed by Carine Roitfeld and immortalized by Mario Testino; all Braina Laviena wants is being herself. Isn’t that what we are all searching for?
*this interview was held on November 9th, 2016; the day after the USA presidential election
How are you?
I’m very disillusioned with people. I’m not even angry at the fact that Trump won. I’m angry at the fact that there are people who actually hate women and minorities that much. Especially that they would hate seeing a woman in office so much that they would elect Donald fucking Trump… I feel sad. Yesterday, I literally cried. I don’t know. I’m kind of scared. Are we supposed to live in fear now?
I think we’re supposed to do the complete opposite. If you think about it, we’ve been living in fear basically since 9/11.
Totally, but right now people are discriminated against and already fear walking down the street because they know that shit can happen to them. Those people are going to be even more scared now. I went to see my boyfriend yesterday and he didn’t understand why I was so upset. He said, “you know he’s not going to change anything overnight. It’s not like tomorrow is going to be the end of the world.” But what he doesn’t understand is that it’s not necessarily about what he does or what he doesn’t do in office, it’s the fact that he represents…
The country! He’s the face of the country!
Exactly, and if he represents that, the American people that have beliefs similar to his are going to feel like they can do whatever they want now that law is on “their side”. So already there’s all kinds of crazy people blowing shit up and these people are going to be even more inclined to just go out and talk shit and hurt whoever they want because of their thinking. I’ve been harassed. I’ve been discriminated against. I was date raped. And knowing that the president of the United States is someone that is okay with all that; what are people who do that going to think? That it’s totally okay for them to do these things. Maybe before they were a little scared that there were precautions of the law. The flip side is that people are so angry that something like this would happen that maybe it’s a wakeup call for people to be active and outspoken about the stuff they actually believe in and take action.
Absolutely. We’re in this fashion/entertainment bubble and activism can be seen as just another fad. But now it’s not the time to make politics fashionable. It’s the real shebang.
In that sense it really pisses me off when I will try to express things that I care about within this industry, not related to the industry or other issues that I care about, and they’re usually like “you shouldn’t talk about these things” or I’m into things that I care about that don’t happen in fashion and it never comes up. It’s always cut off. 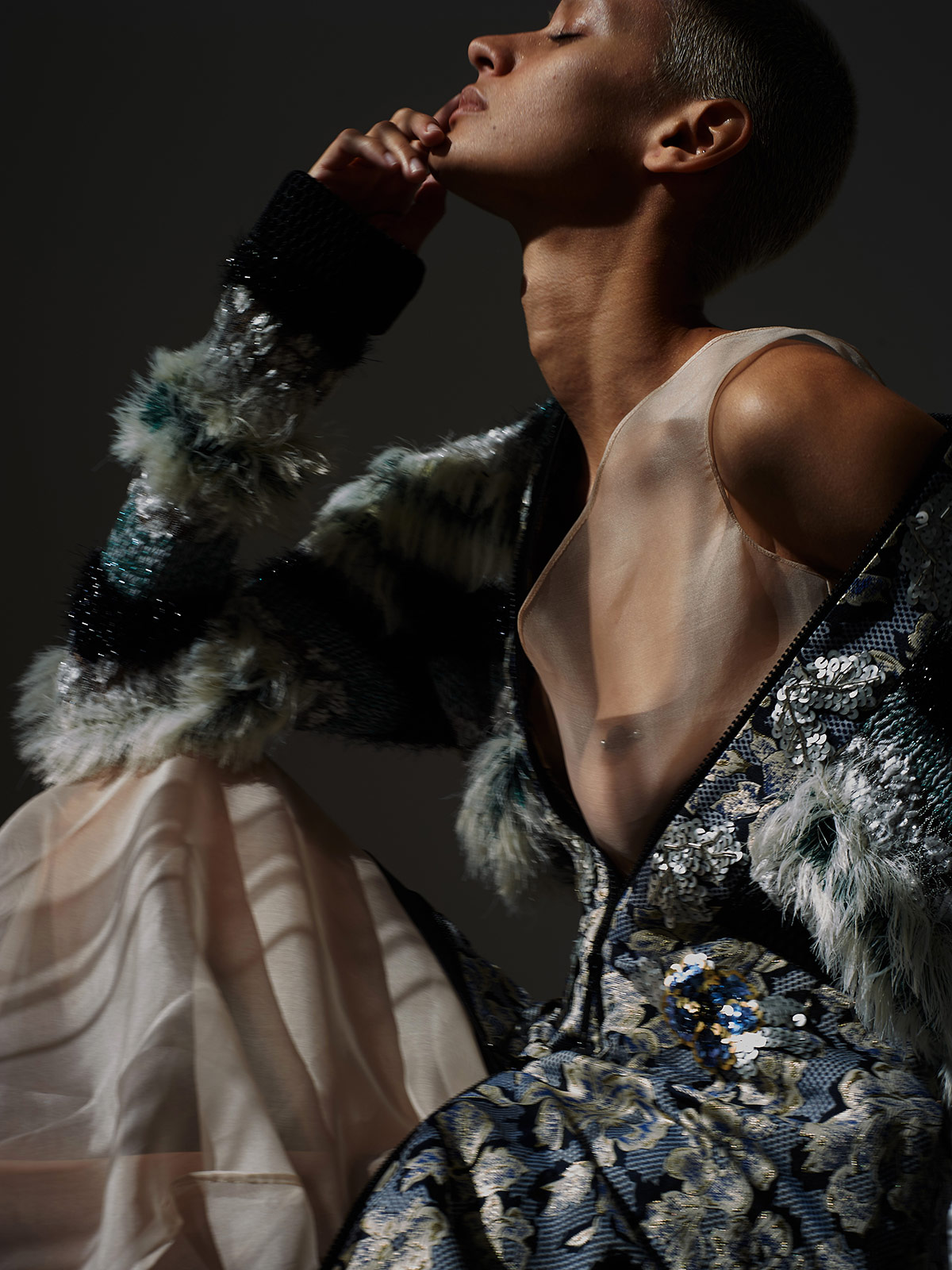 What are these things that you care about that they always cut off?
I really care about homeless people and mental health issues, like mental illnesses and healthcare. I’m bipolar and have anxiety disorder and they are hard things to control. I keep it intact. I’m on my medication and I have it under control but there is a stigma with it existing. And there’s also the stigma that if you take medication for it people will be like, “oh you’re just drugging yourself up”. Anytime I mention anything like that it becomes uncomfortable and that’s the whole point of why I say it. If it makes them uncomfortable it’s probably because they don’t know anything about it. More than anything, it’s not even about the stigma. It’s about how the stigma affects people who have those disorders. I’ve posted a couple of things about me having panic attacks or things like those and I’ve gotten messages from girls saying, “thank you so much for posting that”. It helped me see, understand and know that it’s okay that I have this. I’m going to get help or whatever. People are scared of accepting that they have problems, of accepting that they are vulnerable, and that that’s actually the best thing you can be. You should embrace that vulnerability. That means that you’re more sensible to things that other people ignore. If you embrace that vulnerability you can create better things.
Absolutely. The world is so vulnerable right now that I think it’s a duty for people like us to be even stronger than we’ve been before.
We’re living in a generation of indifference; where everything is avoided and nobody ever says; “you know, I’m having a bad day”. People don’t share those things.
You do. I’ve seen those beautiful self-portraits of you crying and they are raw, precious photographs.
Thank you! I think it’s important, because there are people growing up in that conflict and are amazing. Happy people, people that have families. And I’m sure that if they feel bad, they feel ashamed because they don’t think that’s normal. And I think it’s important for people to know that it’s okay to be sad, it’s okay to have a bad day. You know? If you have problems, you can share them with people and get help. It’s also very important that people know how not to become a victim. You know, you have your problems. You lay the cards on the table and ask yourself, how do I fix this? What’s on the to-do list? The universe pays back when you’re vulnerable. When you allow yourself to be naked in that sense in front of the world.
Is this also how great things have happened to you this year work wise?
I mean, yeah. It’s like I was realising that things always look a certain way from an outside perspective, but compared with reality they might not be as glamorous. It has been a good year to realise. I have a new agency with an amazing agent. He’s a person I can talk to and I’ve been completely honest with him from the beginning. I’ve been in other agencies where I’ve said “this is something that I care about”, and they would tell me, “you know that’s something that shouldn’t be said, it will affect how people see you, it will affect how clients see you, they will think you’re not stable enough”. When someone says they are bipolar, people shouldn’t think about someone running through the street screaming at everyone all the time without any control whatsoever.
I’m sure that there are many people out there and even people reading this interview who are bipolar and don’t even know it yet. They just go about their days but they don’t know it.
Exactly. Or they know something’s wrong with them but they’re scared of accepting it because they think it’s such a bad thing because that’s how its portrayed by outside people. 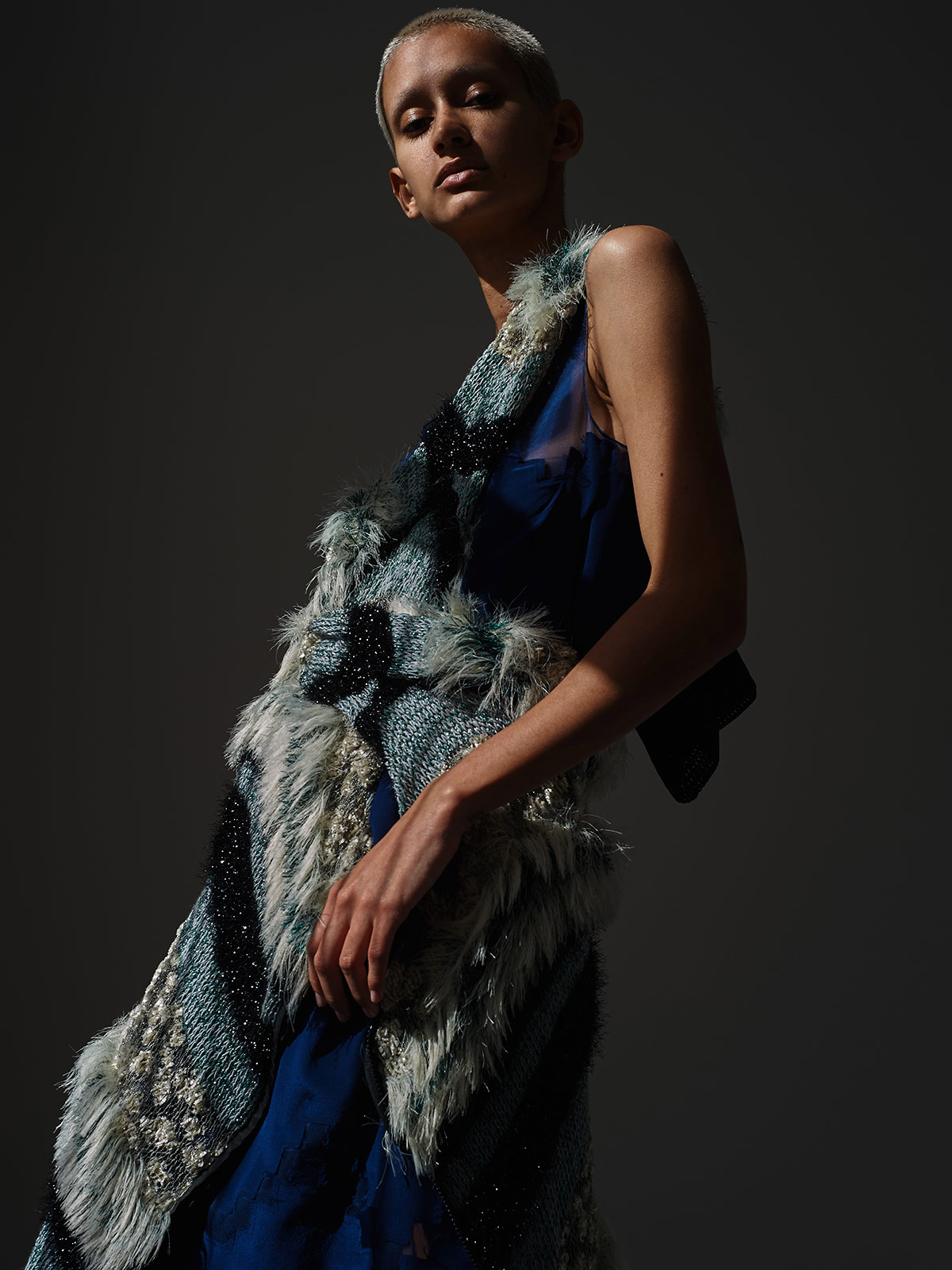 How do you go from being a girl from Caguas, Puerto Rico, into suddenly being one of the most coveted models in Los Angeles?
I studied Journalism and Advertising and was working on the campaign for Puerto Rico’s governor at the time in its social media platform. Then I kept working with that creative team for about a year and half and I just got tired. It was a desk job. It was the best and at the same time worse desk job. I did have a lot of freedom to do creative things. I wanted to move to LA since I was 17 to model, but I couldn’t go because my parents forced me not to, they said I had to wait until I had a degree. So I broke through when I got my degree, which I ended up really liking in the end. Even though the people I was working with were great, I just wasn’t happy. So, I made the decision to move out here and try it because I had wanted to do it for years and I hadn’t done it. Better late than sorry, right? It was just being in the right place at the right time. Everything is 80 per cent preparation and 20 per cent being ready. That’s what it’s all about. If I had not gone to school, if I didn’t have a degree, if I hadn’t worked in the campaign for the governor or if I hadn’t done all those things, I wouldn’t have been able to end up working with Kanye and doing what I do now.
Some people like to say that they regret spending time doing certain things and I think it’s the opposite. Everything is happening because it has to be happening, don’t you think?
Yeah, you learn from everything. You can go through a terrible experience but in a way it’s good because you always learn something from it. Either you learn what you shouldn’t do again, or you learn that you’re strong enough to do things. I believe you always come out stronger in the end.
That’s what it’s about. Now, more than ever, it’s about being a warrior.
Exactly. I’m not lucky, I worked, and that’s why I am where I am. I got the serendipitous chance that someone walked in and met me or something, but if I hadn’t worked to know what I know, or to have the experiences that I have, I wouldn’t have gotten those opportunities that people think are lucky chances.
You have to do your work.
Right now I am at a good place in my life where I’m in control of myself, my career, and in control of the things that I’m doing. I’m doing my photography and I’m working really hard for it. I feel like I’m on the right track towards better things. 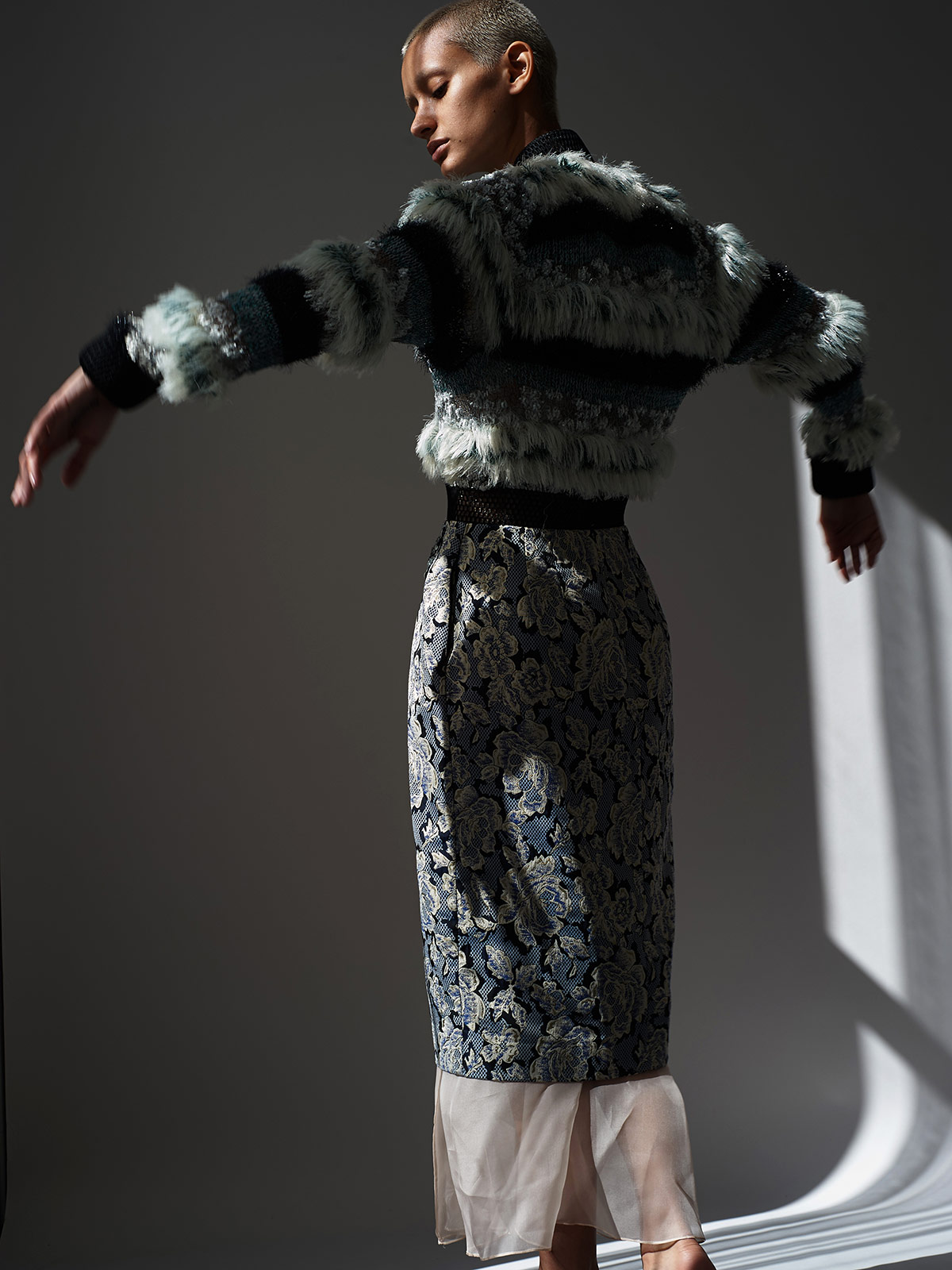