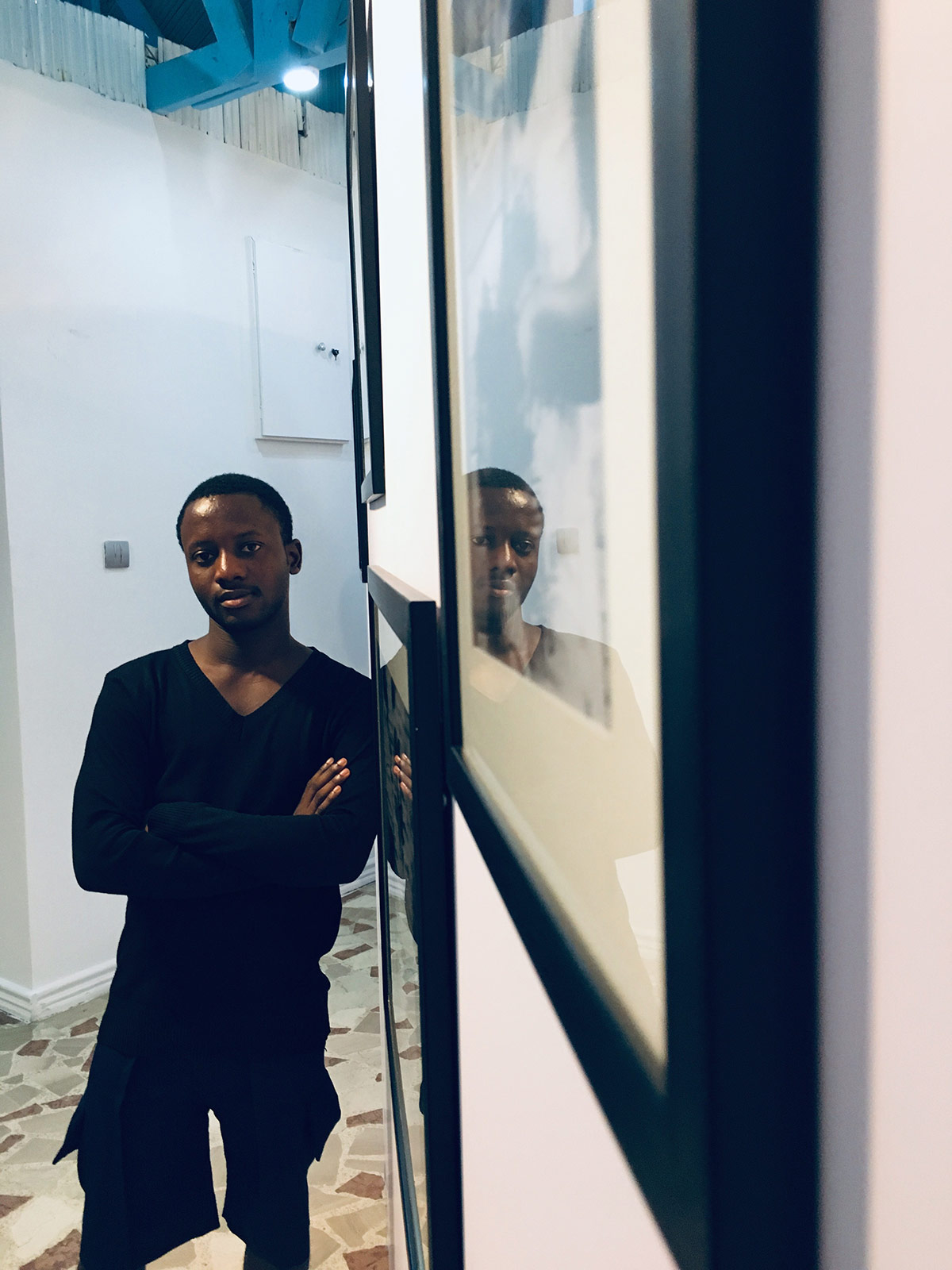 Growing up in the countryside with a very conservative background wasn’t an impediment for Faith Oluwajimi to found his androgynous brand Bloke. He has a strong vision about gender in fashion and he is hopeful that the new generation in Nigeria will change the country’s conservative background. Today we speak with him about breaking the moulds, beauty standards, evolution, and Nigeria’s fashion scene.
Hi Faith, can you place us a bit? We want to know how growing up in Nigeria and founding a fashion brand there is like.
Honestly, I believe that starting a fashion brand based most especially in Nigeria has to be one of the most challenging things ever. Growing up in Nigeria and being an ambitious young creative kid raised in the countryside has to be one of the things that toughened me up for the journey ahead, which has been amazing so far. I mean, I’m here chatting with METAL Magazine!
When did fashion come into your life? Tell us about your personal background.
I was raised in a town called Ijebu Ode, about an hour drive from the buzzing city of Lagos – also Skepta’s hometown and home to one of the paramount rulers of the Yoruba tribe. My dad, an art educator and photographer who has an M.A in Visual Arts, plays the piano and paints. And my mum is an accounting tutor. Growing up with them definitely introduced me to the arts, especially my dad. But the interesting part is that it was my mum who told me about a family friend who knits and asked if I would like to pay them a visit, which I did. From that moment on, I never looked back. 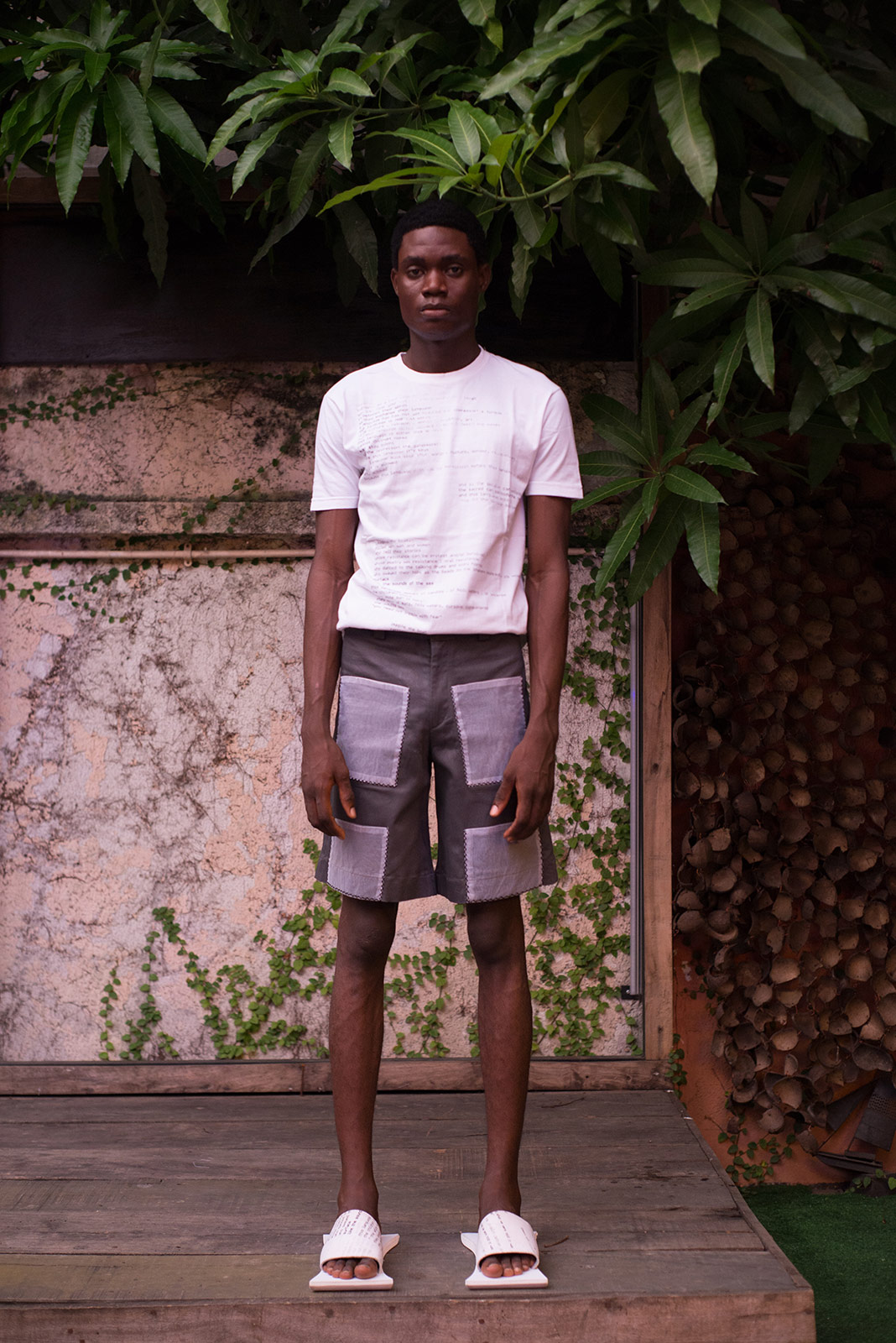 We were surprised to discover that you studied Agriculture, which isn’t common if you’re in the fashion industry – at least in Europe. How do you feel this can complement/influence your brand or vision about creating?
Actually, when I was in my second year studying Agriculture, I already knew I wanted to be a fashion designer. But there wasn’t any school in Nigeria that could offer me the knowledge I needed or could impact what I had learnt for myself over the years, so I had to just follow through with the course while I thought myself about design and fashion.
Also, agriculture and fashion can actually cross paths when it comes to materials. For example, selective breeding of sheep to produce the best wools, culturing of silkworms, planting cotton and a lot of organic materials used by the manufacturing sector of fashion. So they aren’t really parallel, I see a connection.
In your website, you describe Bloke as “a community of people who are spiritually conscious, art lovers, unconventional with an African identity”. Is that how you see your team and the universe the brand is creating?
Exactly, that is the underlining factor of all we are about as a brand.
Your brand gives visibility to one of today's most talked-about themes: gender. Masculine and feminine take each other’s hands to create an androgynous label. How do you feel you’re offering this to your public? How do Nigerian men welcome this masculine-meets-feminine aesthetic?
Nigeria is actually a country with a conservative background but I believe that the new generation of men, especially the ‘social media generation’, really do not care about boundaries and wouldn’t mind expressing themselves as they dim fit. That’s why the brand is here to keep the conversation going and be a part of the gradually shifting culture in Nigeria. 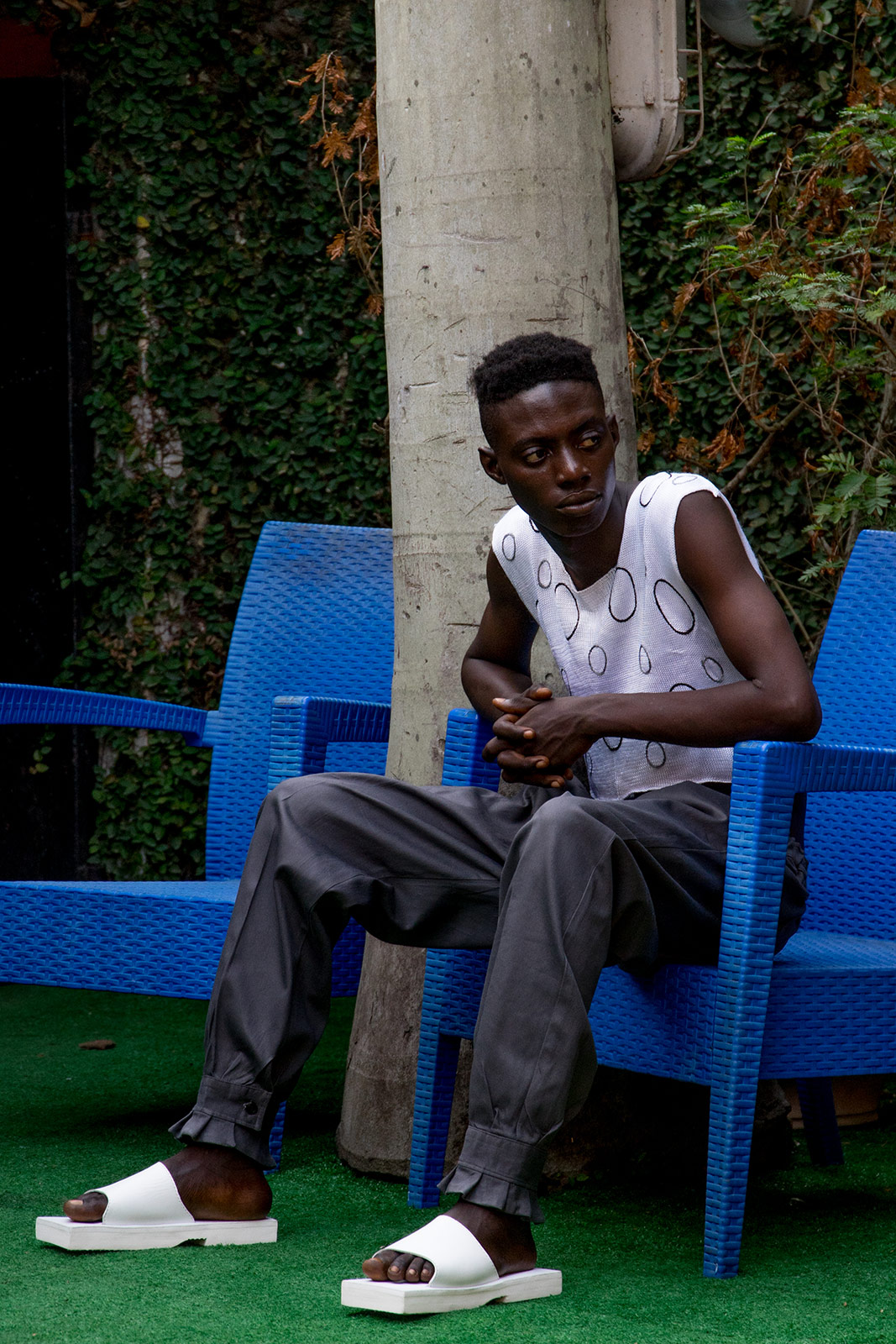 We’re also curious to know: since the brand is labelled ‘androgynous’, why are the lookbooks shot with either a male model or a female model? Why don’t you mix them?
Like I said earlier, the country has a very conservative background, which allows women to be as flamboyant as they wish but boxes men into a particular image, which usually translates into a very sartorial way of dressing up (mostly in suits). Showing the collections so far on male models is a revolutionary act of showing different or alternative ways a man can look like. This might not make much of a statement in the beginning, as the brand is still young, but there are plans to mix the two in the future. It might be in the upcoming season; we just have to look out for what’s next.
How can fashion help to break society’s standards? Do you consider you’re doing so with your garments/collections?
Yes, I am. I believe that fashion is one of the most influential parts of our lives, and it goes a long way into seeping into the culture at large to break some of society’s preconceived notions.
About Nothing, the one-minute video that introduces us to the homonymous Spring/Summer 2019 collection, left us a bit perplexed – not in a bad way, of course. We only see shoes and textures accompanied by motivational reflexions on choosing your own path. Why didn’t you show any clothes?
A lot of things actually spurred me into making a film for this collection. It happens to be my first film, my debut runway collection, and my debut collection of footwear designed and developed in-house. As an unconventional thinker, I actually wanted to translate the mood and vision of the brand in the simplest way with as little trace of fashion as possible, with an anti-fashion-meets-still-life underlining but still with a very strong direction capturing what we are about ideally. That was what led into the film made in collaboration with my friend Robert Matuluko. 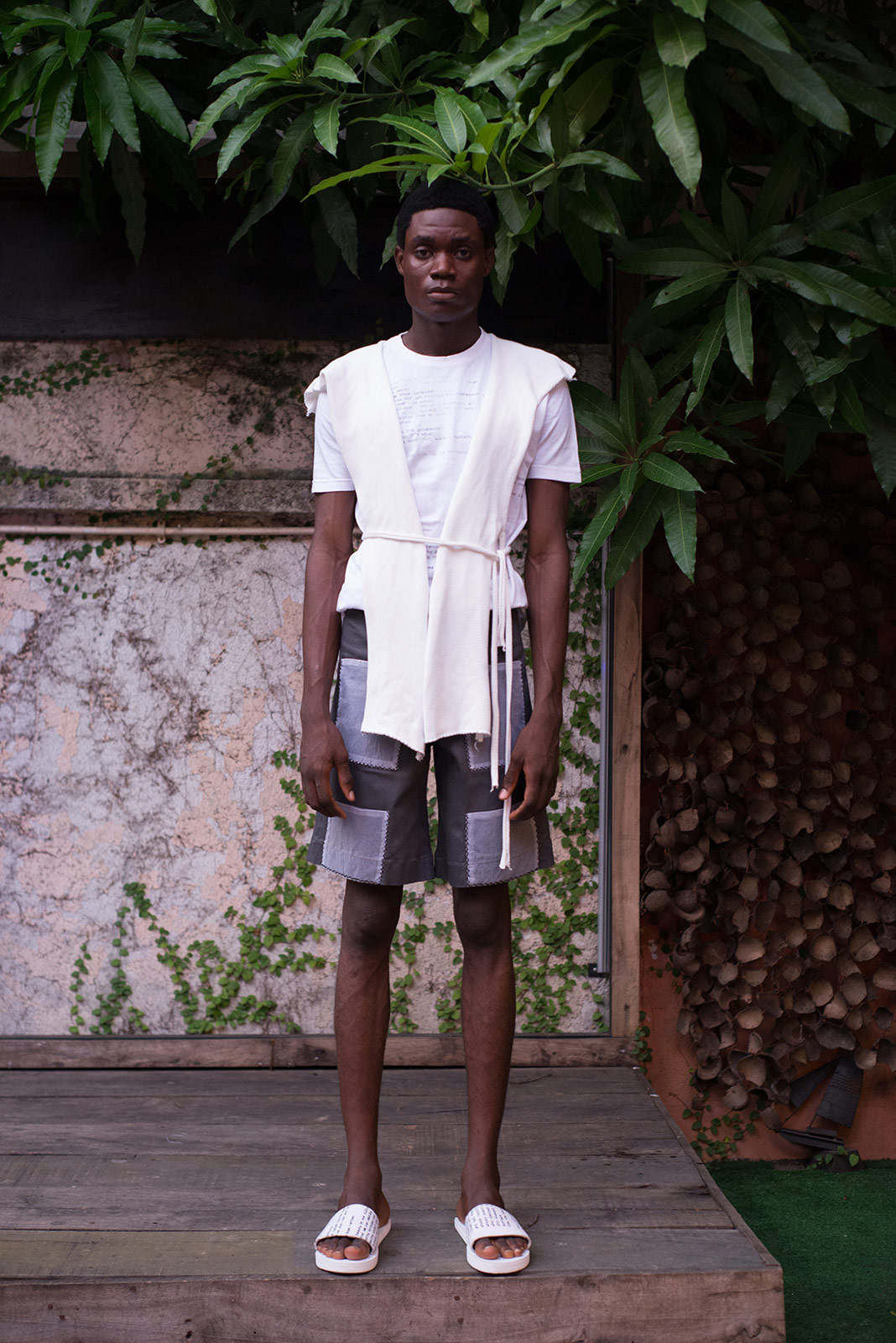 After checking your previous collections, I’ve noticed an evolution in the use of colour. For example, in the Fall/Winter 2017 and Spring/Summer 2017 collections, bright tones were really important. On the contrary, for this upcoming season, it’s neutrals that dominate the clothing – black, grey, and white. Why?
My choice of colours for each collection actually depends on the theme and mood I’m exploring for that season, so if the theme is to be translated in all red, we get an all-red collection for the season. That’s just it.
In each of your collections, fabrics are an essential part. From printed shirts or unexpected cuts to broken textures and soft knitwear. What does knitwear offer?
I believe knitwear has a lot of potential to offer; to be able to decide how a garment looks from just a single strand of yarn shows there are a lot of possibilities into what can be achieved in its use in garment making. Through knitting, you tend to be the master of the silhouette as well as of the texture. I believe knitting is also the backbone of streetwear as a whole because it’s the most basic item. A t-shirt is most likely made from a knit fabric but most people are clueless about this when they rush to strike out the importance of knitwear in contemporary culture and how it influences the way we dress today.
For young designers, it is hard sometimes to find unique fabrics in order to create original pieces. How does Bloke solve this? Do you manipulate your own textiles, or do you work harder on the research of them?
I always manipulate my own textiles. I believe that, as a designer, that’s how you really make the garment yours. 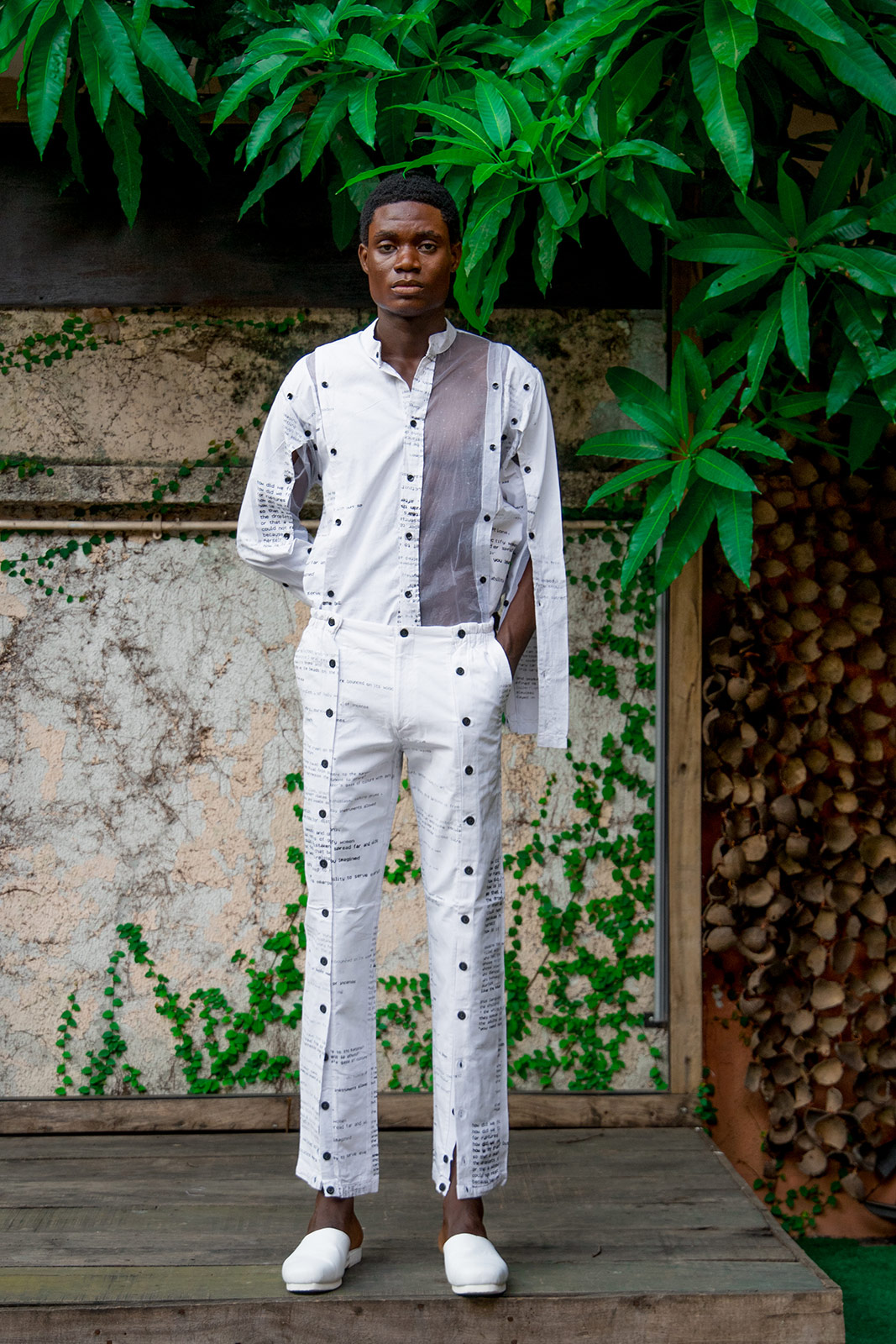 You've been featured in different international press including WGSN, which is one of today's top forecasters in fashion. Designers use these sort of platforms/trend agencies to find what’s coming. During your creative process, do you consult platforms like these (anticipating trends), or do you follow your instinct?
I believe that, as artists, we unconsciously or consciously reflect the times, so as a creative I just follow my instinct, which at the end of the day still finds a way to sync in with the trends of the season most of the times. You can say I am telling the future (laughs).
You're not only the designer of this off-the-wall brand but also the stylist – this is not usual, as fashion designers are usually limited to design and create. Do you think it's important as the creative director of a brand to participate in every part of the process?
I believe I’m not just designing clothing; I’m designing a brand, so every process – no matter how small or who I’m working with – needs my conscious and premeditated input as a creative, which I believe is a gift that doesn’t occur usually with most designers. But I know of a few who possess this ability, like the legend Rei Kawakubo, Simon Porte Jacquemus or Samuel Ross, just to name a few.
What's the best part of creating? Which part do you enjoy the most?
I actually enjoy all parts of the creative process, but my favourite has to be the collection presentation because I’m a visual thinker. 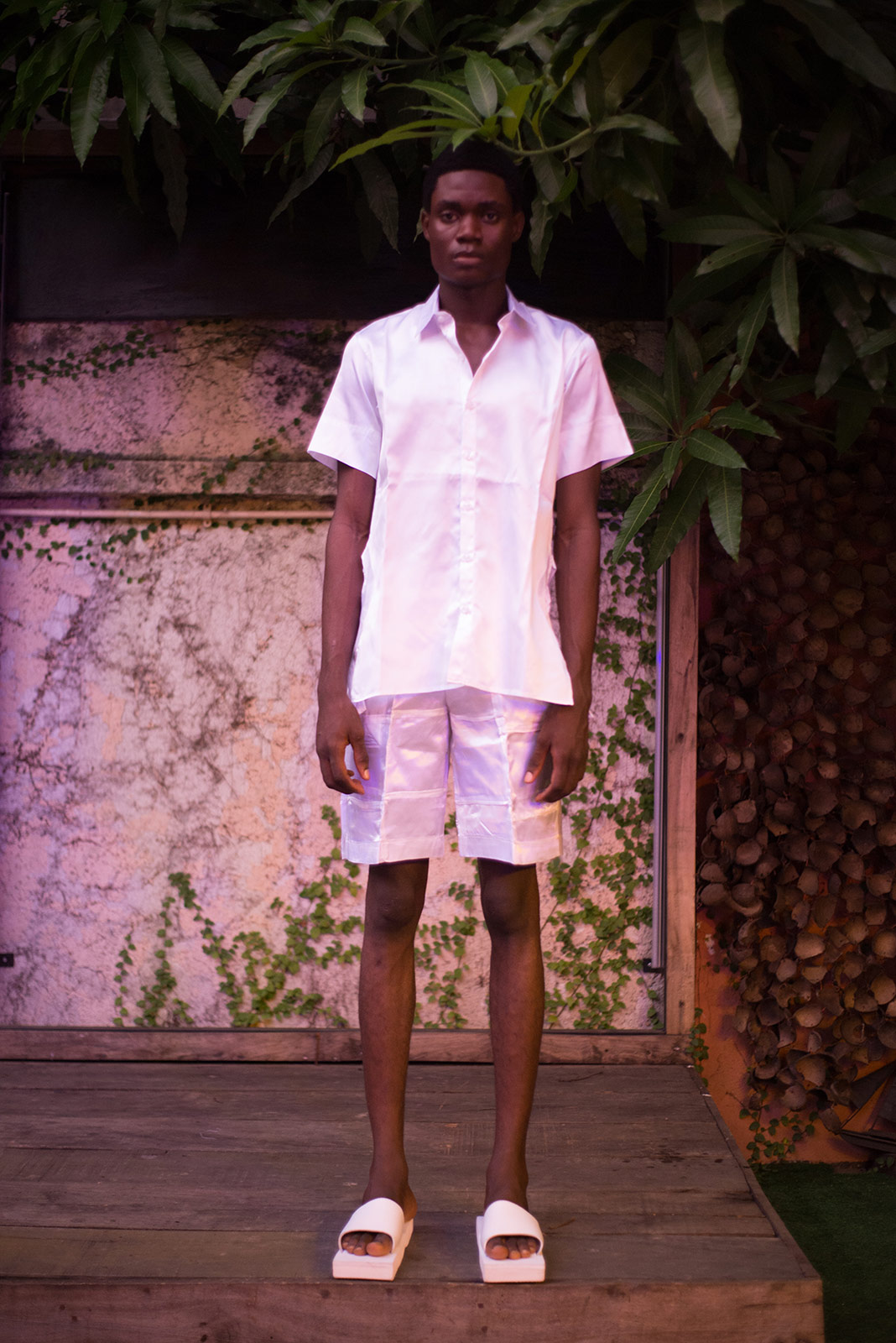 It’s interesting how nowadays we're all connected somehow; social media plays a very important role for creatives to promote their work and let others know what they’re doing, what they have to offer, and that they’re ‘here’. Do you feel this helped you to get where you are now?
Yes, I think so. As an outsider from fashion circles – being in Lagos –, I believe that my ability to get noticed by international press publications – such as Vogue, WGSN, Vice, etc. – early on for my work at Bloke really helped my acceptance as an unconventional creative who knows what he’s doing here in Nigeria and Africa as a whole.
I would be lying if I said social media didn’t help. Also, I collaborated with a friend, Khanh Brice Nguyen, who made the soundtrack for my debut runway show, and poet Lanaire Aderemi; both of them were far across my continent, they live in London, so social media is the only way possible we could’ve done that.
How do you see Nigerian fashion in ten years long? What advice would you give to young fashion designers who are starting in your country?
I see a much more refined structure than it is now, and whoever is starting out by then will be lucky. My advice to young designers is to really ask themselves and know with certainty what they are about as creatives and craft their story with the most authentic voice. Anyone can make a shirt and trousers but not everyone can create a concise vision. Also, stay consistent and allow time to refine your voice.
What's your next step? Let us know about a personal or professional goal for the upcoming months.
At the moment, do better than my last collection and also get nominated for the LVMH Prize in the nearest future. 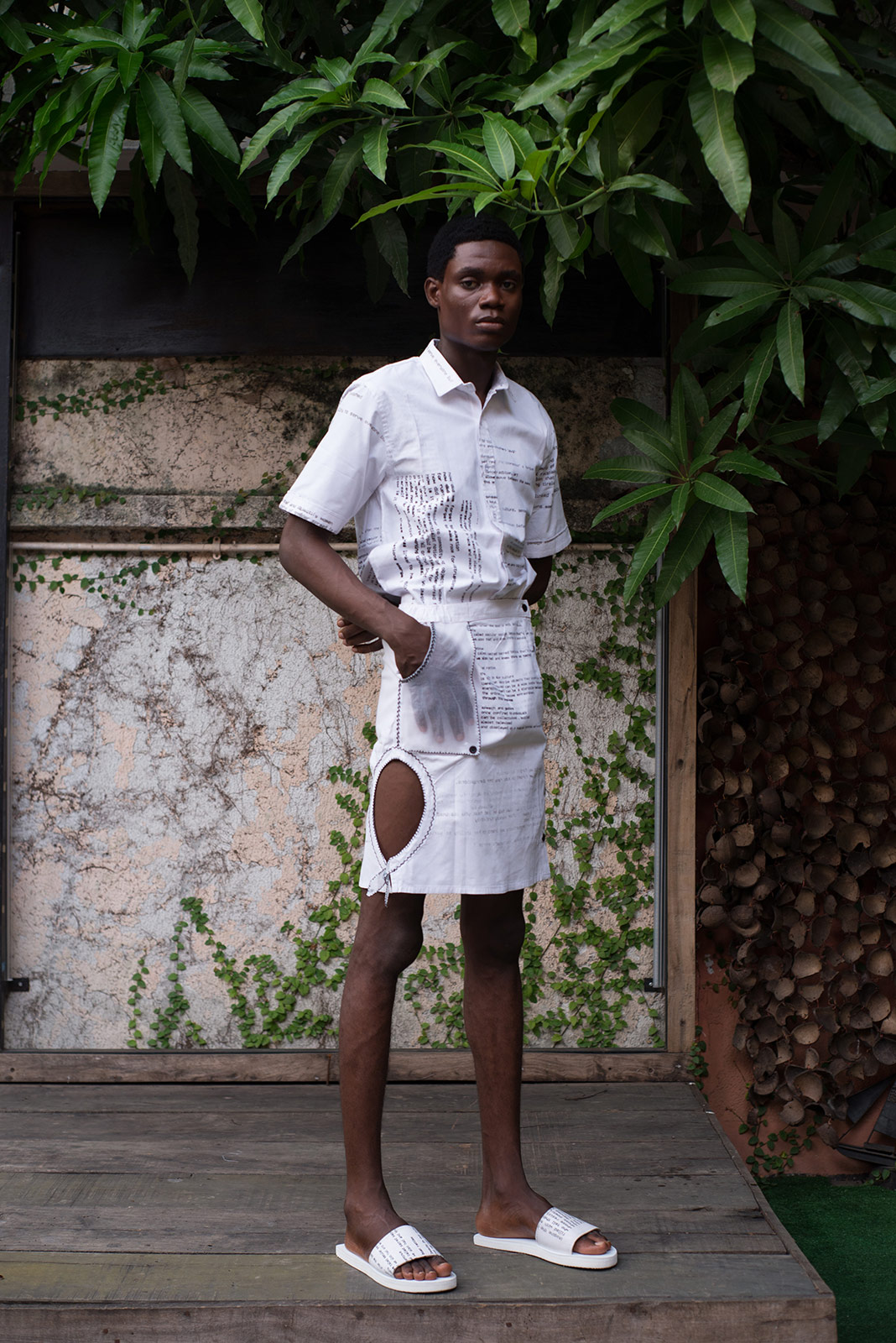 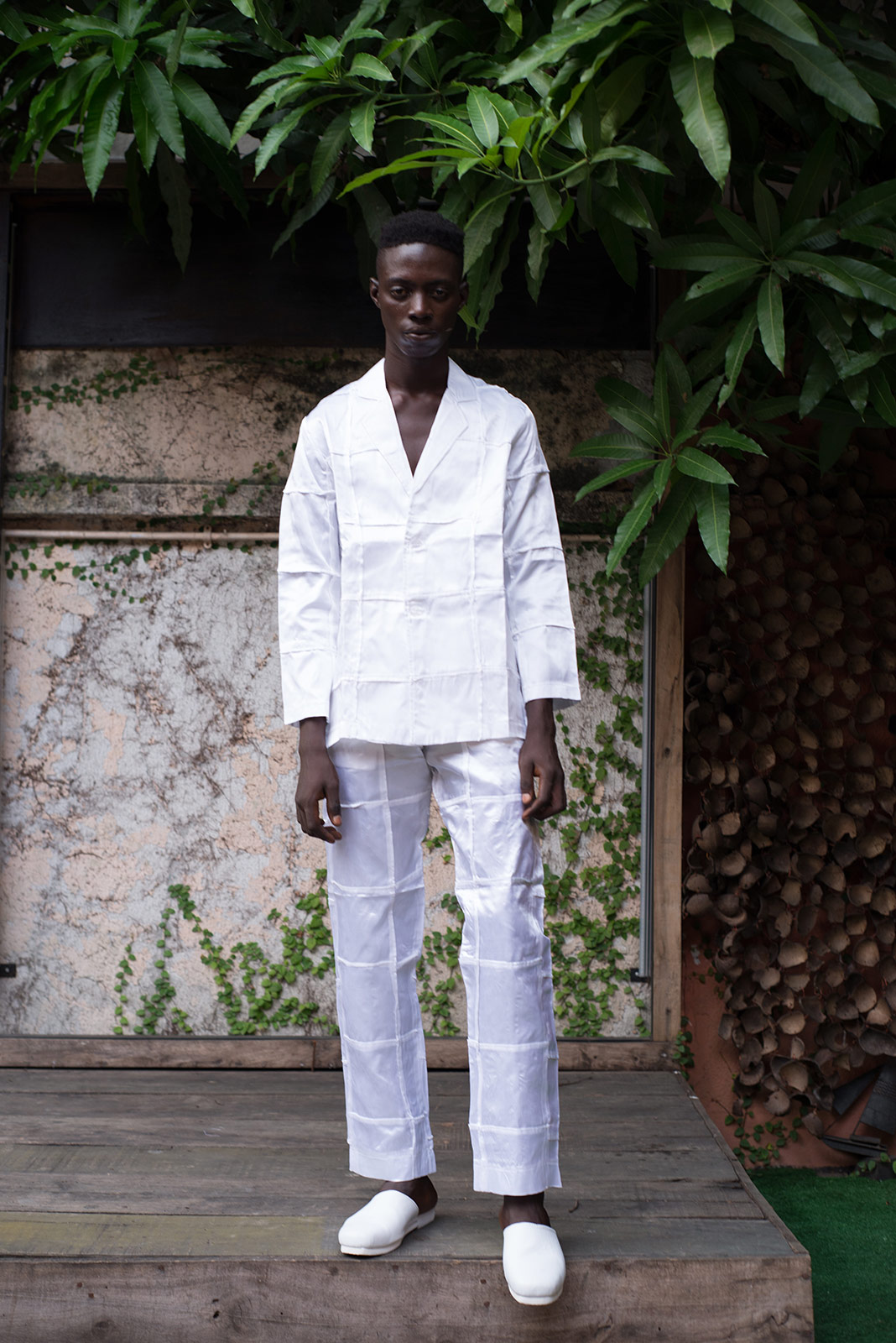 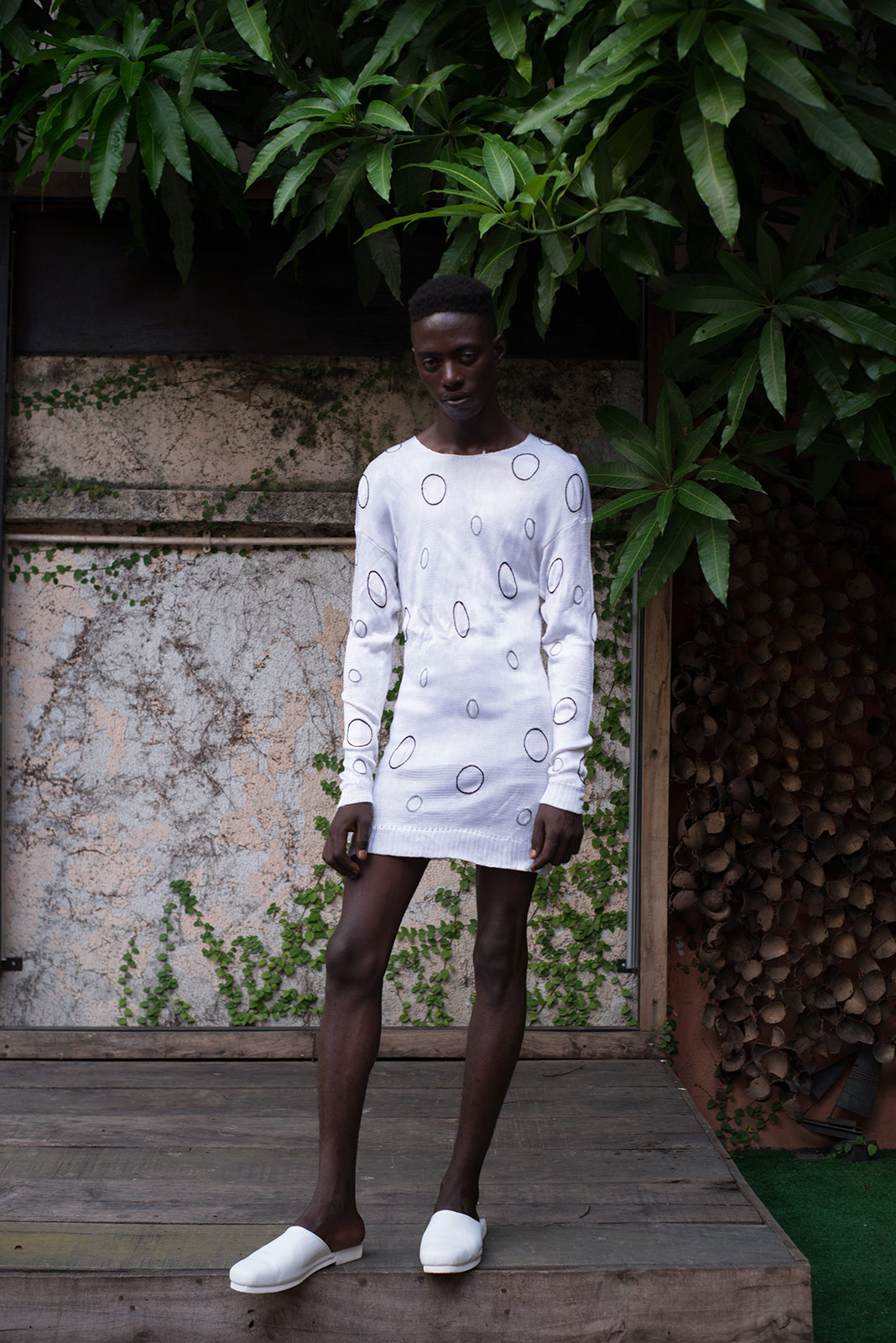 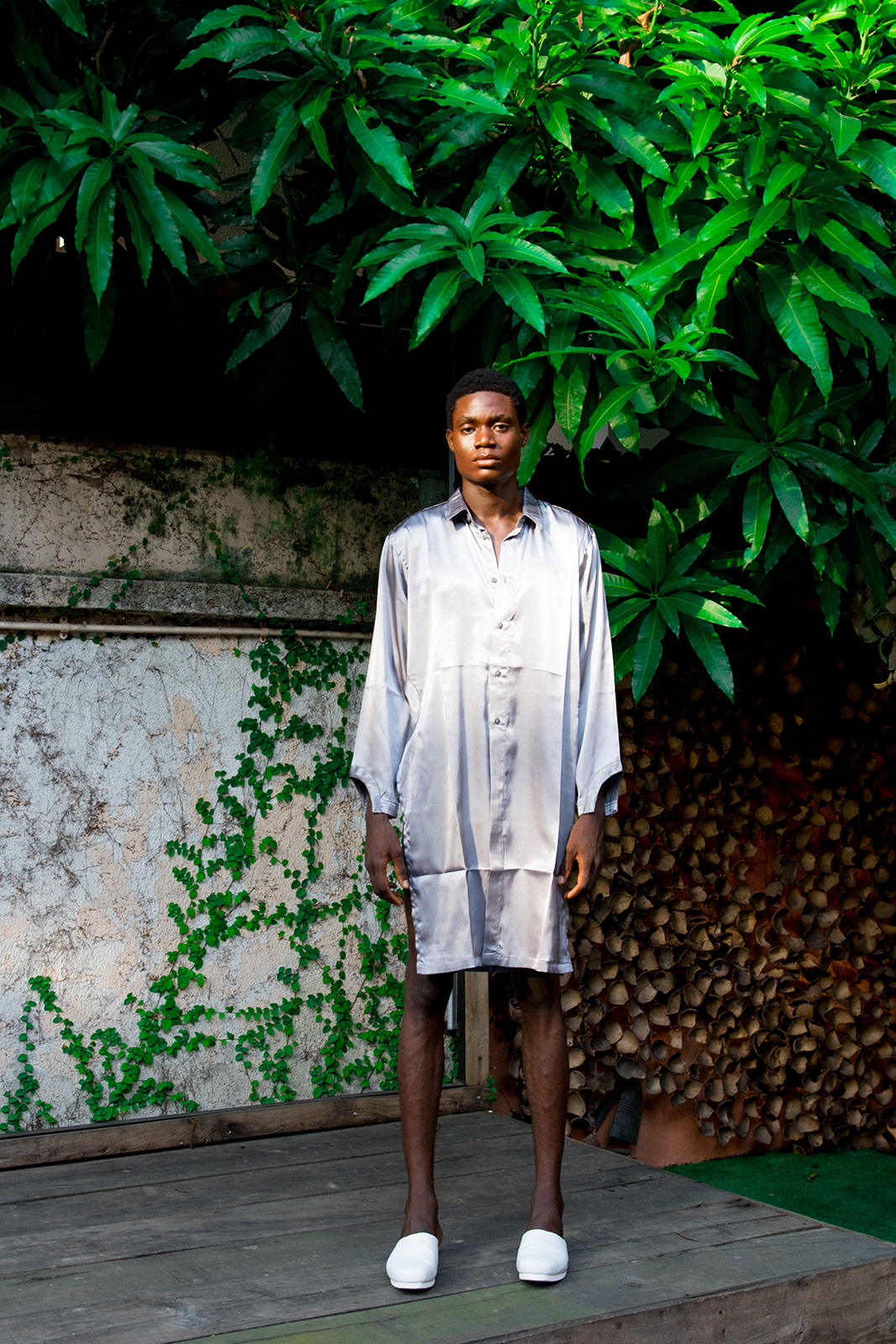 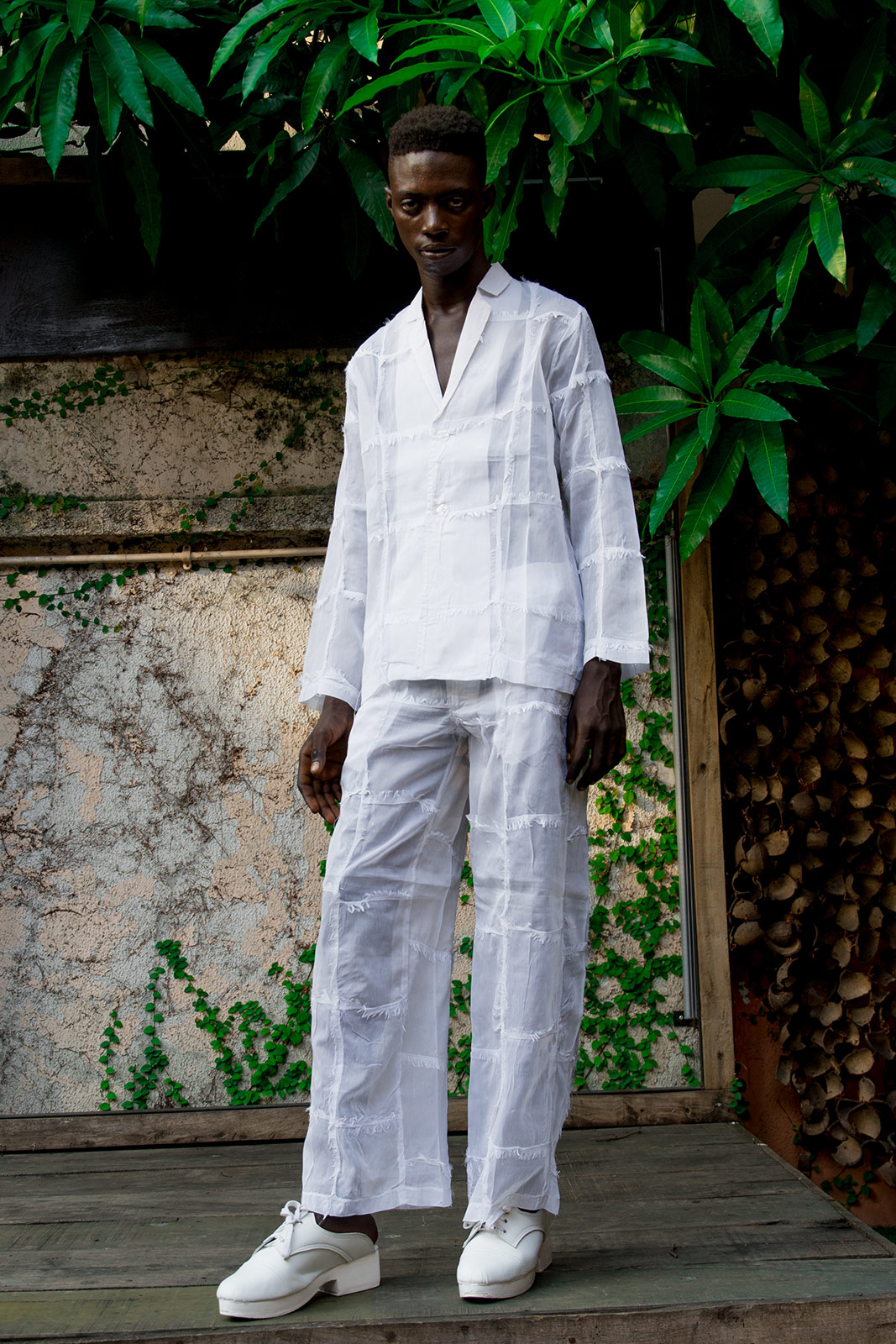 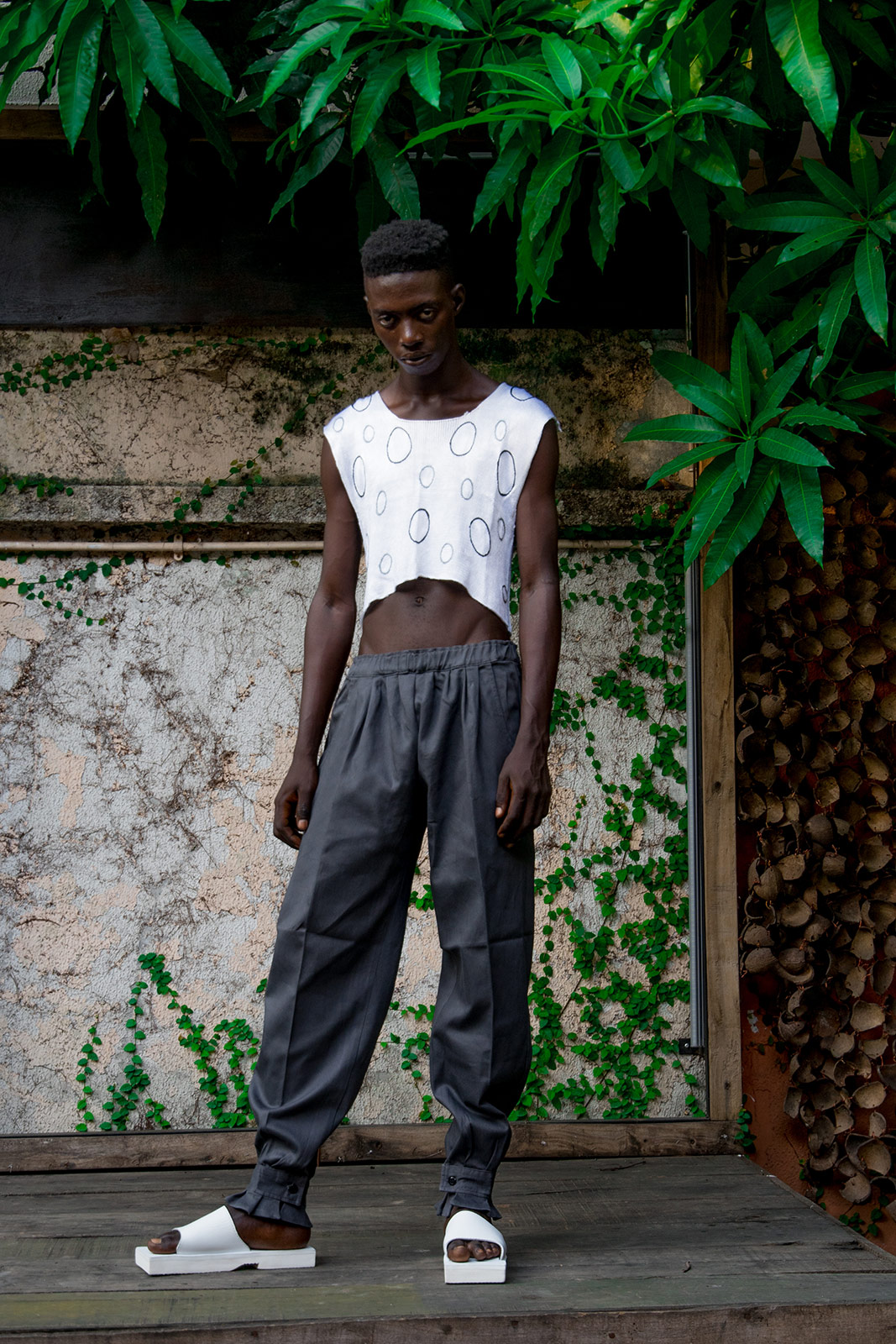 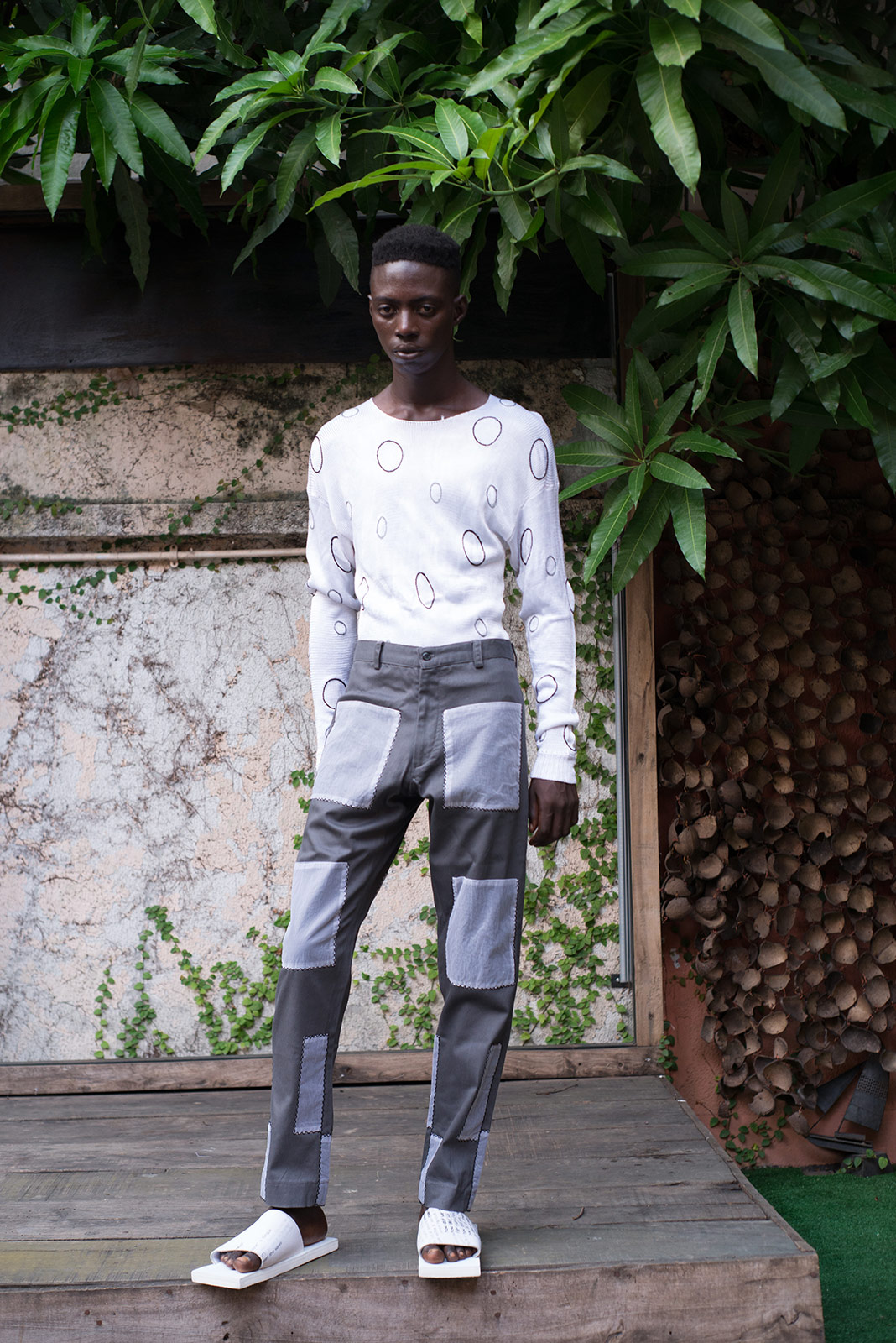 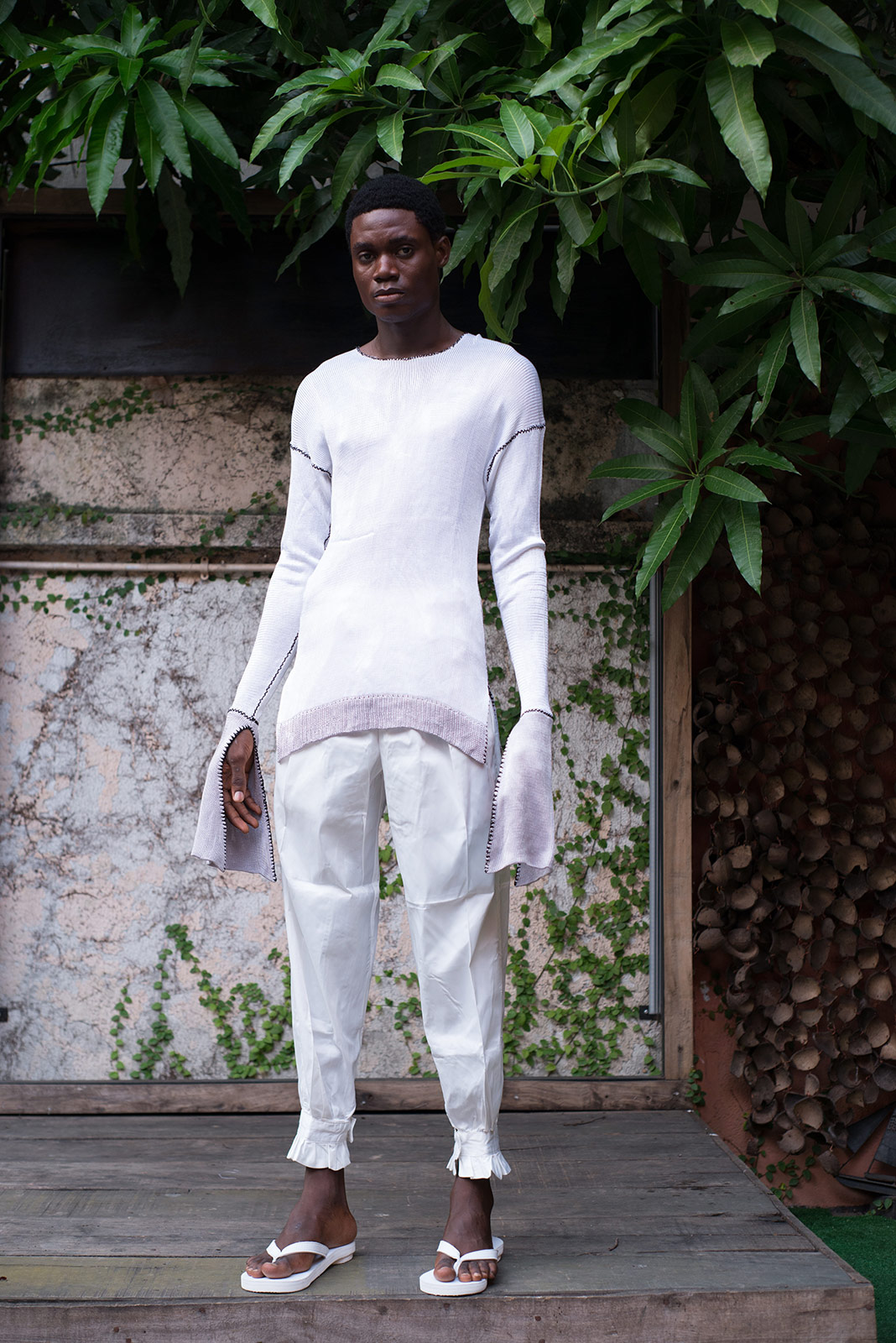