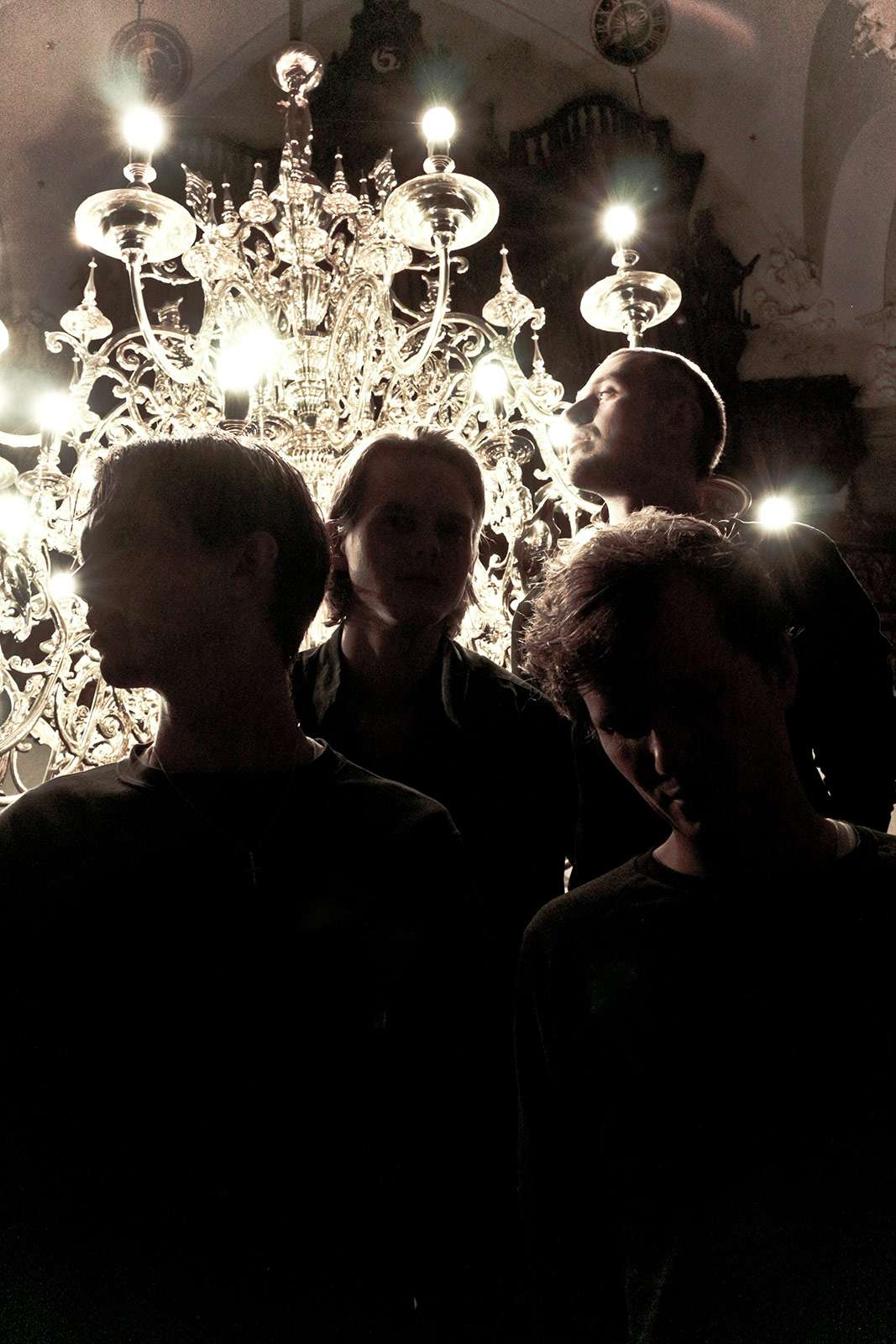 Blaue Blume hail from Copenhagen but they pull inspiration for their intricate, ornate sound from all over. Despite being relatively new to the scene, Blaue Blume embrace a spirit of experimentation in their songwriting that enables them to develop intricate compositions and lyrics that plunder every corner of the psyche. Their poignant and ambitious latest album, Bell of Wool, explores themes of darkness and adventure. We speak to Søren Buhl Lassen (drummer) and Jonas Smith (singer) about how the album came together, Talk Talk and how to find joy on the road.

Let me start by saying, I’ve been listening to you all weekend since I heard I was interviewing you! I love In Disco Lights and Vanilla and how you’ve evolved in between. To begin, please forgive me for the age-old question, but how did you meet?
Søren: We met maybe fourteen years ago in high school and started playing together in between classes. Throughout high school, we started to get more and more serious and got tired of just playing as a two-piece, so my brother, Robert, joined the band – Robert and our friend Peter came along and play the bass. I guess it was young friends getting together and starting to play in high school, the typical band cliché.
A few days ago, you dropped your new album, Bell of Wool. How did these songs come together? What inspired this release?
Søren: In some ways, we’re still figuring out what this record consists of both in terms of musical value but also emotionally. It still intrigues us to listen to it because there’s so much unanswered in this piece of work. The way we did it was very spontaneous, throwing things around and being very impulsive within our creative behaviour. Because of all that fast movement and impulsive changes, we’re still discovering how these decisions look and feel today and keep revealing themselves when we listen back. The record contains lots of fragments, everything came from early demos and sketches. These small fragments became the centre of a new piece upon which we further developed into songs. There was a lot of figuring out how these fragments all fit together to become something more.
Did you work with a different producer on this release?
Jonas: We produced this one ourselves. I think it would’ve been impossible to do this with a producer because so much of the work was done through impulsive changes. Making a whole song from a demo and working on it before realizing that, actually, it’s only one section that works and then isolating that and building a new song around that. Having a producer in that loop would be very hard because we don’t have the budget to have someone to be with us every day. The flexibility of only having to deal with ourselves was very important and that’s why this record still sounds so fresh to us. We actually managed to do whatever we wanted to do whenever we wanted to do and move on quickly.

Bell of Wool seems to mark a change in a more intimate direction. Lyrically, you seem to be letting the listener into your personal journey through anxiety and depression. How was that journey for you?
Jonas: While writing it, I wasn’t really aware of this state of mind. It sounds a bit ridiculous to romanticise this difficult period of my life, but it’s exactly that. Finishing the last vocal takes on the album, things went really bad for me and I had to put everything on hold. We waited for half a year to listen to what we had recorded just before I had this depressive episode.
What happened then?
Jonas: While listening back to it, I discovered these images I wrote about how I found myself while feeling this emotional sickness. While writing, I wasn’t aware of what I was doing, and looking back, I think I could have prevented it. I listen to the lyrics and they are very personal, but also, they reveal something dangerous in me, I would say. But still, I think they are translatable for every other listener. As I hear it, it doesn’t become too sentimental, it doesn’t dwell on that emotional state.
Søren: I’ve been by Jonas’ side in writing these lyrics but also through getting sick and getting better. I think it’s very important to note that the lyrics aren’t written from a state of actual depression, knowing that you are sick and wanting to get better through healing lyrics. Everything is just imagery written from a life that’s perhaps going in the wrong direction but before you realise it’s happening to you. This makes it more universal because it’s from everyday life, it feels small and very innocent in a way.
The fact that they have some sort of prophecy to them is beautiful but also scary; to see what is happening to you in your art before it actually takes over you. That was never the intention but that’s what makes them work so well. They’re so true that the writer doesn’t even know what he’s saying while he’s writing them.
You’ve made a name for yourselves playing the circuit of big European festivals. What are some of the lessons of touring rigorously in a short space of time?
Jonas: There are two obvious lessons. Number one, you get extremely good as a performer. It’s like an endless rehearsal that makes you like a well-oiled machine. But on the other hand, that comes at a price. It just took its toll on us. Your health is not limitless, there’s a cap on how much you can play every night. You have to face the question every night: are you better, and if so, are you ready to live up to that expectation right now?
A lot of people have compared you to the new romantic era of English music in the 1970s and ‘80s. Where do you pull inspiration from personally?
Søren: Not that you’re able to hear it with all the references we have on this record, but especially in the process of making it, we’ve been huge fans of Talk Talk, in particular, the record Spirit of Eden. They worked with a groundbreaking technique where they invited people to play something without telling them what it was. Later on, it showed up in a strictly curated and arranged track. That whole mystical way of making a record has inspired us. That band in particular, the way they handled synth-pop or new romantic sound with a twist, musically. We’ve always been inspired by them a lot.
Jonas: A lot of newer electronic music has played a big role, not in a direct way, but the idea of accepting that everything can be modulated, edited and changed. Not just moving them around but drastically changing the timbre of elements, using Jonas’ voice or Robert’s guitar to create synth sounds. We really embraced using the computer as an instrument and not a recording tool.

The next question is for you, Jonas. The songs are built around very intricate, ornate compositions, but at the heart of that is your incredible voice. Who are your heroes (vocally speaking)?
Jonas: Of course, we all stand on the shoulders of giants and I’m no different, I have my clear references. Growing up and figuring out who I wanted to sound like, I was really influenced by Nina Simone and Billie Holiday. They gave me the courage to be a singer and dare to open my mouth and not be afraid to express myself or to be too theatrical.
On this record, I think I am in a place where I relaxed a bit more. It’s not necessary for me to unfold technically on every track. I really try and sing from a place of comfort and in tune with the song and not think too much about how my heroes sang better than me, sung higher or lower notes. I’m really in a good place now where I can fully express myself. When I hear it, I’m always very picky about vocal takes, but hearing the record, I’m really satisfied with the overall expression.
I imagine you’re taking Bell of Wool on the road. What are your three essentials for touring?
Jonas: Don’t prepare too much once you’re on the road. Try to have fun and don’t stress the soundcheck too much. Remember to have a good time as a group; watch movies and listen to records together. Nurture your relationship together. This is a mantra for myself: try to sit away from the very emotional core of the song you’re trying to communicate simply in order to keep yourself standing. Allow yourself to not go into the intimate zone to where the very core of the song has developed.
When the songs came out on the 8th of November, then they belonged to the listeners. Now we have the context where we go out and play them. Sometimes, when the mood and space are right, you step into that emotional zone because it feels appropriate. But it’s ok to stand outside of that, you don’t have to always torture yourself with that intimate expectation.
If you could choose any artist to collaborate with, who would you pick and why?
Søren: Oh, there are a lot of opportunities! I really think that Mark Hollis could have been a really nice collaborator, but Kate Bush might be a very good alternative because she has a similar approach and attitude towards music. I especially love Mark Hollis’ approach to silence in pop songs and what he said about learning how to play one note before learning how to play two.
What does the future hold for Blaue Blume?
Jonas: Right now, we are going to play some shows in Copenhagen and then we’re going to play some shows in Germany. 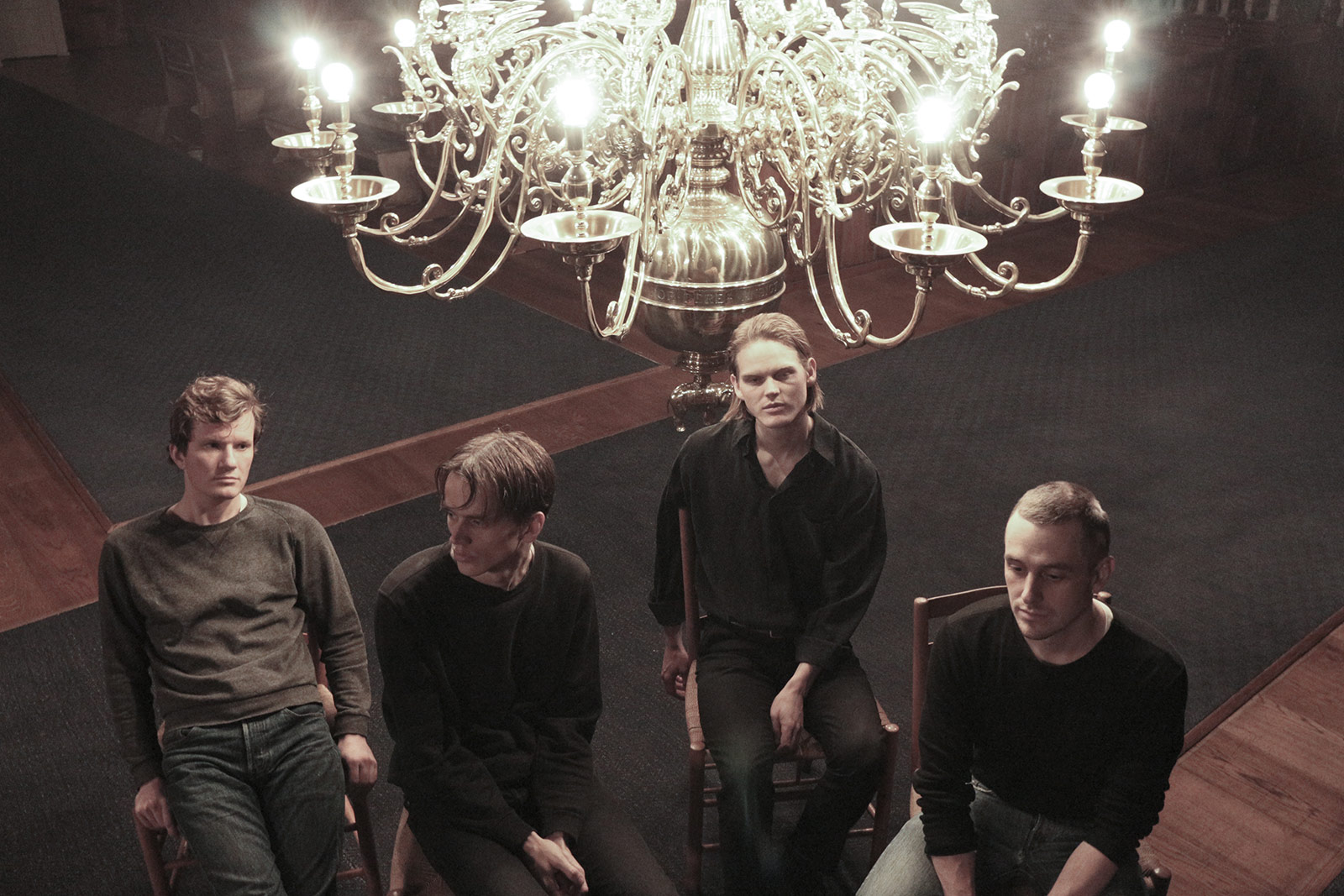