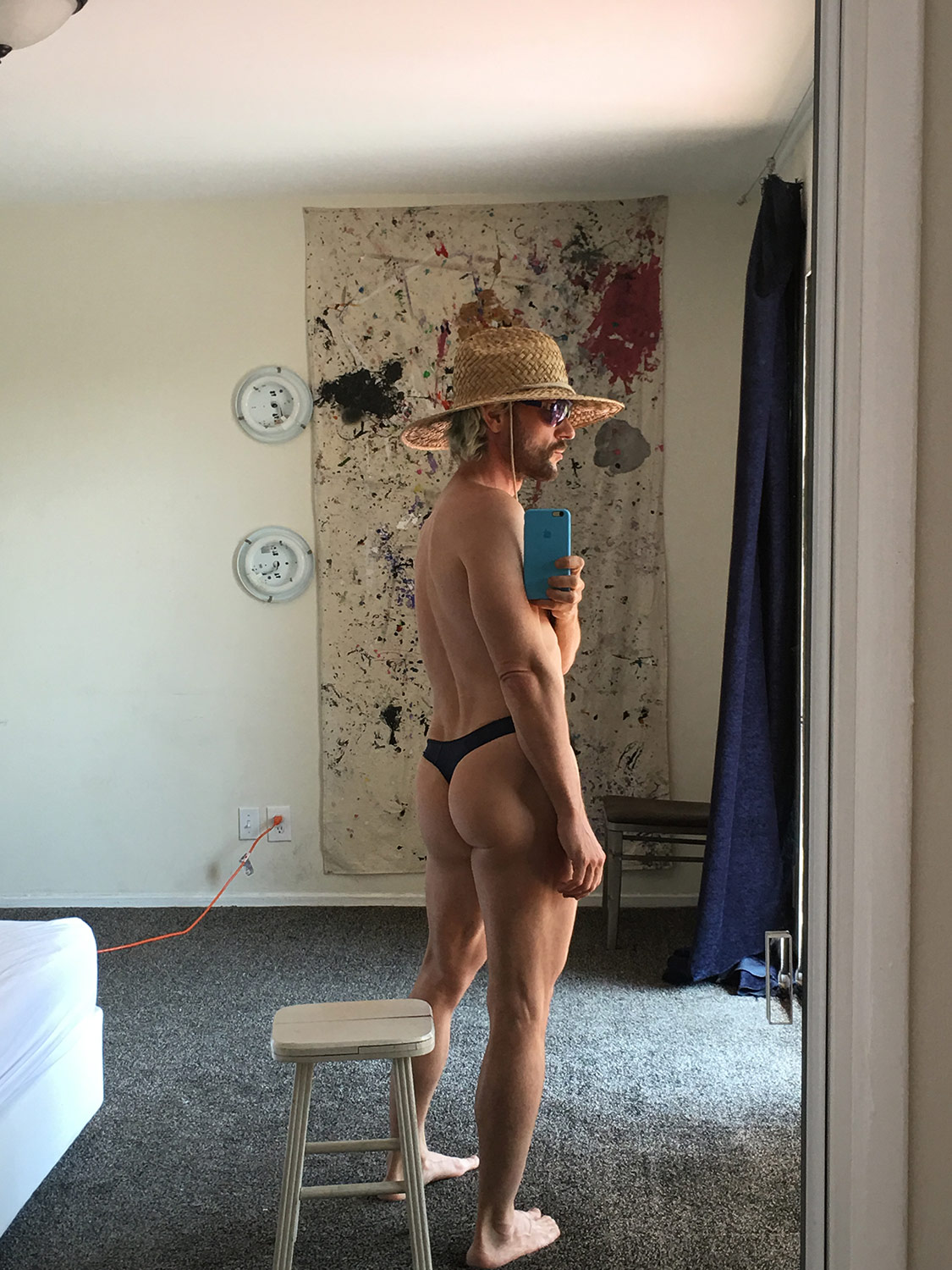 “Today I’m nude in Topanga (or better with a tanga in Topanga :))?)” (‘Tanga’ is German for ‘thong’). Bernhard Willhelm manages to be disarmingly friendly and incredibly entertaining even via email, the least communicative of our contemporary communication tools. His answers naturally flow following his stream of thought, giving an instant feeling of familiarity, as if I was, too, in Topanga, pleasantly talking to him face to face. This unapologetic no-filter approach and informality shouldn’t come as a surprise to anyone who has ever seen one of the designer’s collections, shows or exhibitions – an explosive and eclectic mix of unconstrained influences, colours and experienced craftsmanship that follows no rule and seems to reflect his own approach to life.
Freedom, independence and self-expression, with a bit of exhibitionism and a lot of humour, have been at the heart of the German-born, now LA-based fashion designer’s creative activity since the launch of his brand in Paris in 1999, founded with Jutta Kraus only one year after receiving his diploma from the Royal Academy of Fine Art in Antwerp. The French capital was home for the designer for ten years before he decided to move to California with his small team, where he now lives, designs and collects his beloved cactuses, possibly even more removed from the fashion mainstream than before, and not only in the geographical sense. Whilst maintaining a showroom in Paris, Willhelm has been eschewing traditional catwalks for a long time now both in terms of model casting and performance, always fostering diversity and organising alternative presentations such as dance shows. This tendency was confirmed by his AW15 collection, presented as part of his exhibition at Los Angeles MOCA Bernhard Willhelm 3000: When Fashion Shows the Danger Then Fashion Is The Danger, a reflection on concepts related to fashion, including sexuality and consumerism, expressed through different media.

From the outside, it might seem that, to Willhelm, walking the line between art and fashion and maintaining a perfect balance between conceptualism and irony come as easily as being naked on a beach in Topanga, but it wouldn’t last if it wasn’t built on a solid foundation of sartorial craftsmanship, hard work and sophisticated cultural understanding. We asked the designer to unveil the thoughts behind his latest collection, The Magic Potato, and how the US is influencing his creativity. 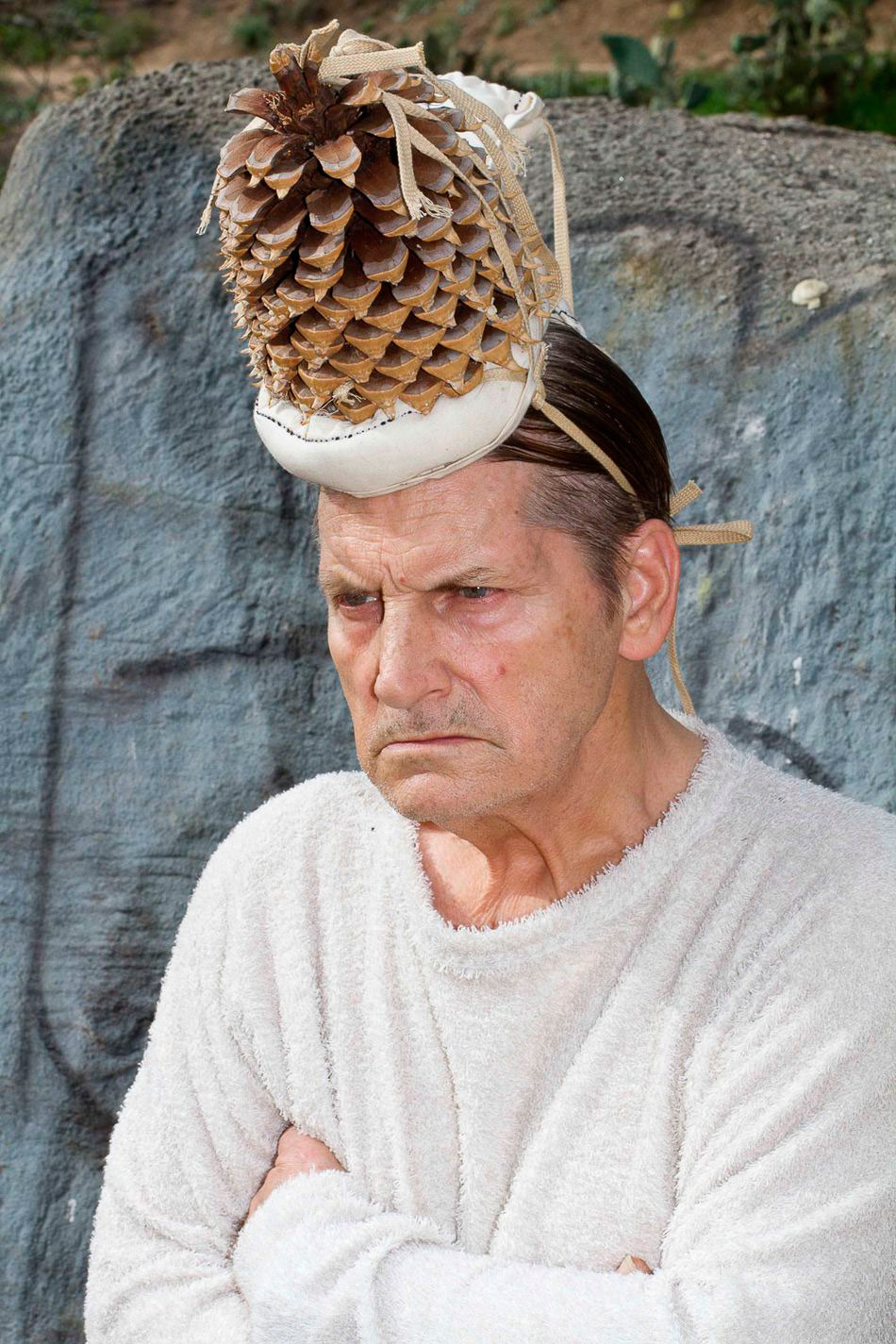 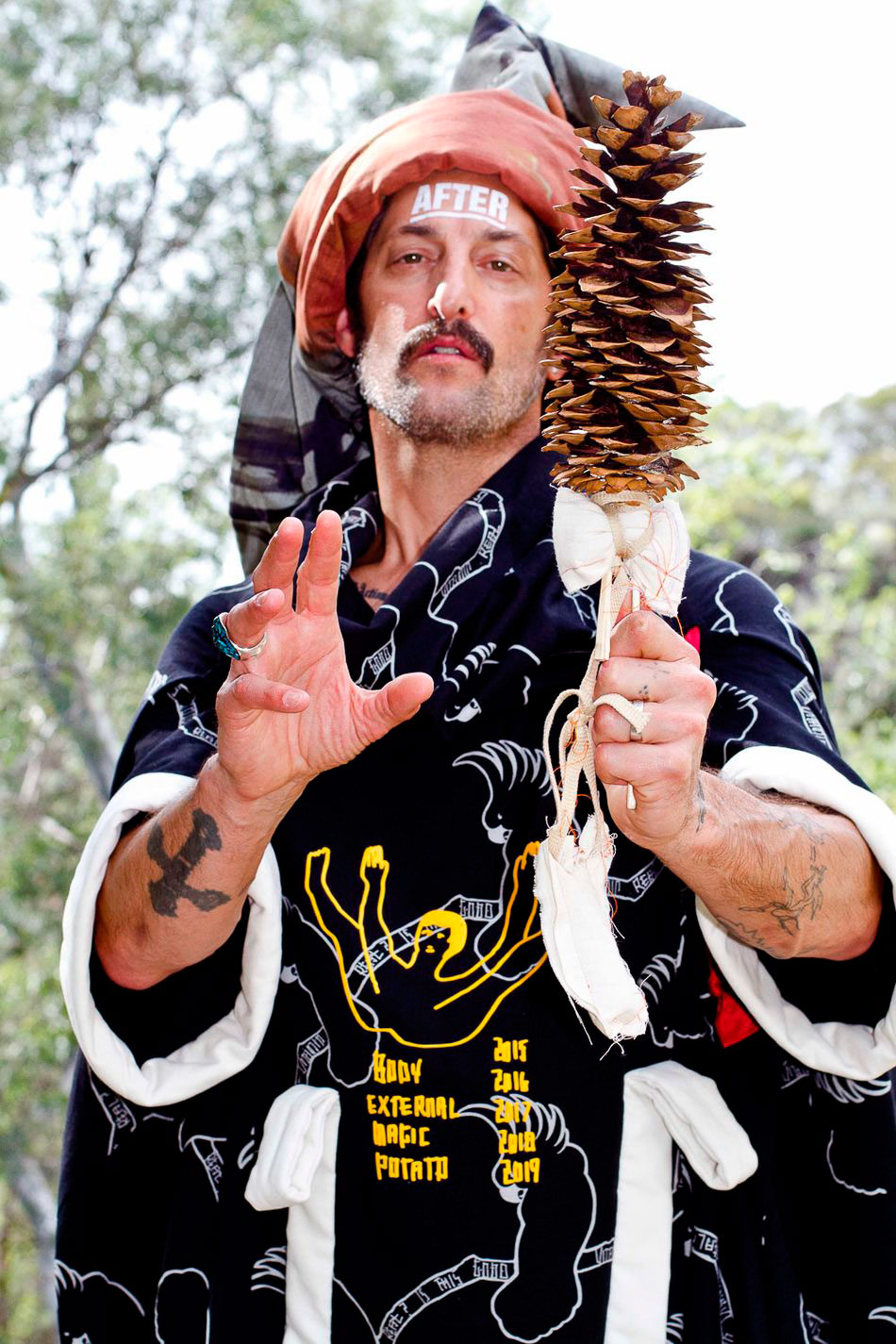 Your AW16 collection seems to make many references to Japan and martial arts. What was the starting point for it and what is it about?
It goes back to Zen Buddhism literature, samurai writing and texts, and the colour RED. The starting point for the garments was the idea to make experimental padded winter kimonos that have a special cotton padding. The mood was the BEFORE AND AFTER – thoughts become actions and things (such as clothes and looks in my case).
You have mentioned before that your biggest consumer base is in Japan. Does this influence your designs?
Tokyo and its strong link to postmodernism influence me – there is no real centre any more, call it decentred universe. I had a trip to Koyasan in Japan before we made the collection. We strayed in a temple with the cook and the monks who brought us in. The morning ceremony took place in a shrine. You woke up with the sound of a gong at 5.30am in the morning. The decoration in the temple was a still-life of yams – I named it ‘’the magic potato,’’ the delight of Buddha’s shrine.
Right now I’m doing the collection and fabric selection in Topanga. LA can be very spiritual if you want it to be. I realize now that I don’t work with many references anymore, but develop a BW language that comes more and more from the inside. It’s that simple idea of having your two hands and a piece of fabric. When developing a collection, I spend most of the time draping on the little doll. Madeleine Vionnet did the same – I look up to her and to Japan in many ways. My collection is produced in Japan and the knitwear collection in Belgium, so you can see both roots. Working between different time zones –LA, Tokyo and Paris– is interesting and challenging. It’s very postmodern. Time turns in multiple circles.
You moved your studio to Los Angeles in 2013. How has living in the US influenced your collections, your creativity and your understanding of fashion?
There has always been a link to Californian aesthetics and colours in my collections. Here I can see and feel different colours and colour interactions. There are different places I like from an aesthetic point of view, such as Venice Beach, Malibu, Hollywood, The Valley, Downtown… past and present, and of course NATURE in general – my speciality. I collect plants and I like bird and whale watching. It calms me down and gives me the feeling of time and the seasons. I started to collect cactus when I was 16 years old in Germany and my mother still takes care of them. In Paris I have a big collection of roses on my terrace and here in California I have a small cactus and a succulent-plant collection on my terrace. ALSO my collection of gay Californian nude mags from the ‘80s and ‘90s is getting bigger. Memphis design and the east and west coasts had a lot of influence on the graphics and layout of those magazines, and still gives me inspiration.
“There is a constant discourse that makes fashion alive and still relevant. It’s for everyone.”
How is fashion in LA? Do you find that people in LA are more receptive to your work compared to Paris and Europe in general?
We had a very good start here, as we work with three important shops: Opening Ceremony, Mameg and H. Lorenzo. People here are more receptive and clothing is more respected as an art form. Last year we did a big show at the MOCA Pacific Design Center. We still sell the collection in Paris during Paris Fashion Week and afterwards in Tokyo, so it’s all in between different places and cultures.
Since AW13 you have presented your collections as women + men. Would you define your designs as agender?
For me it’s not a statement of gender – unisex is pure, as you wear what you like. Streetwear is like that too.
What do you think of the current discourse on agender fashion?
NO to dull shoes
Lower tights
Reduce waists
Abolish bad hair
Secure our wigs
No gender ID
Embrace LGBTs
Ru Paul president for 2022? Or let him be in peace in his ranch…
Art, sex, identity, self-expression, rebellion, conformity – fashion is connected to so many aspects of our existence, and its role and relevance are constantly changing. In your opinion, in what ways is fashion most relevant today? What is its role?
Fashion has now a role in identity, status, and many kaleidoscopic meanings and possibilities. For you it can only have a warming or protection function, or it can be a substitute for your own failures and a correcting element for a not-perfect body. Here we go with a long chain of determinations as centre, like substance, essence, subject, energy, ego, consciousness, God or man (spiritual thoughts). There is a constant discourse that makes fashion alive and still relevant. It’s for everyone. 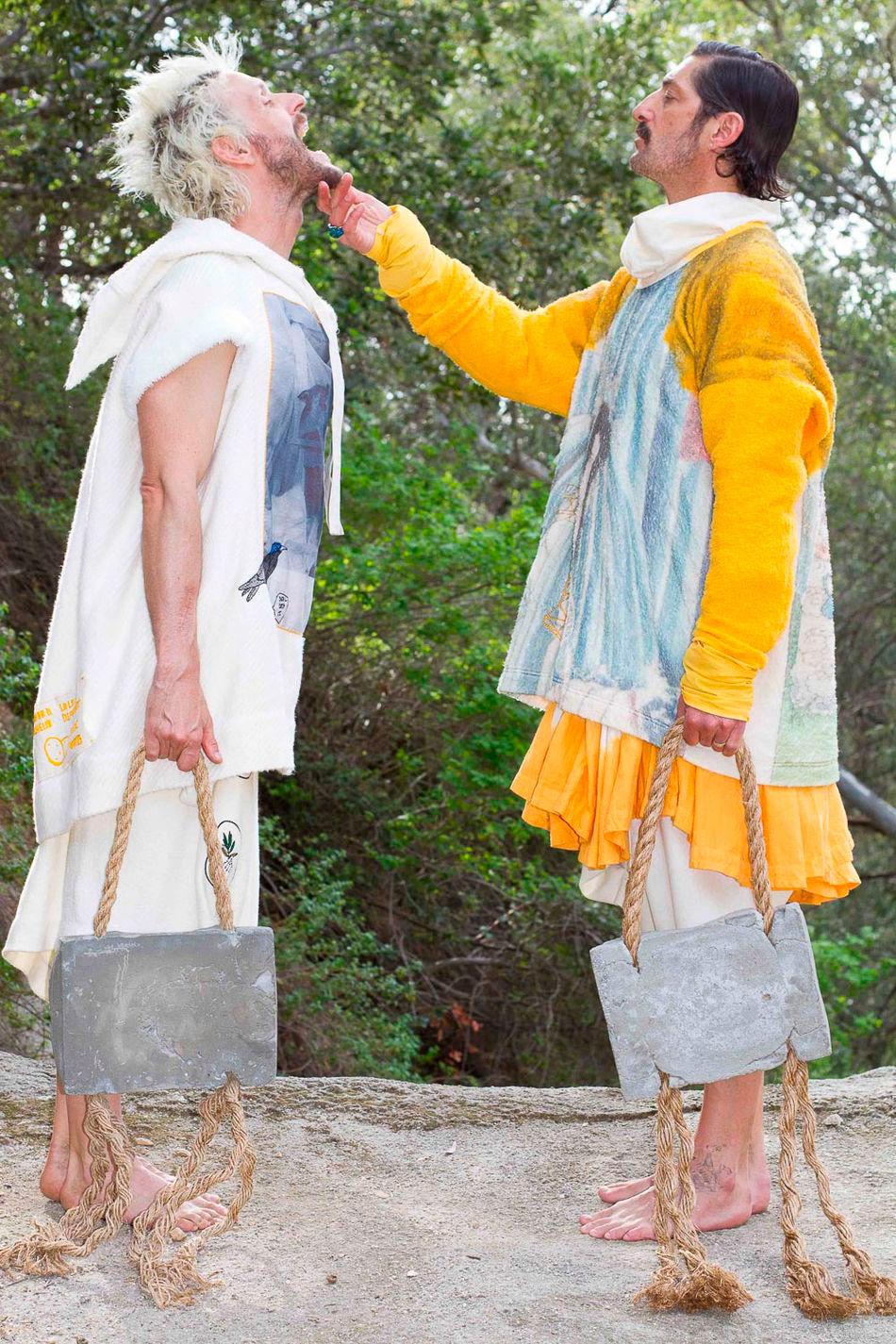 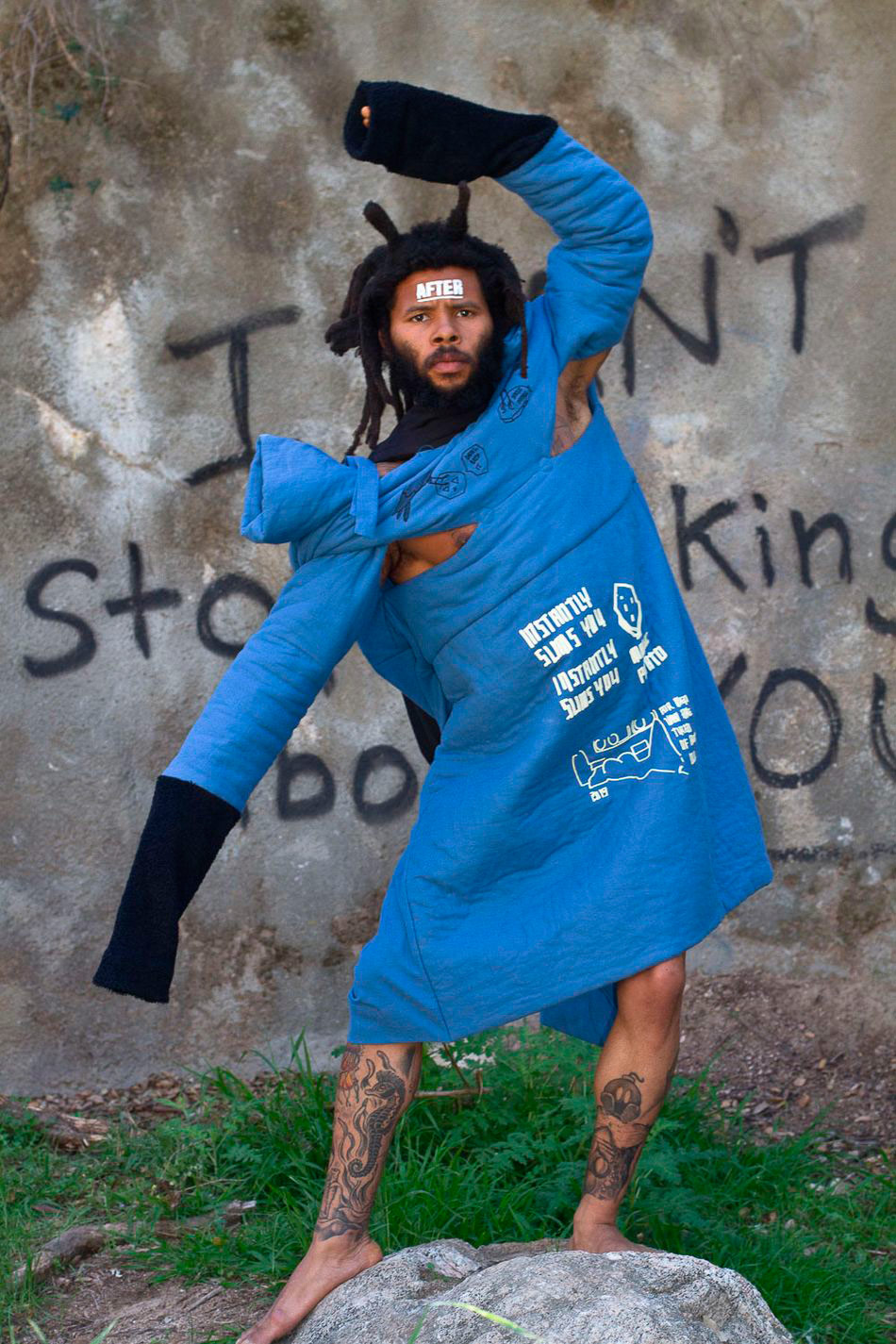 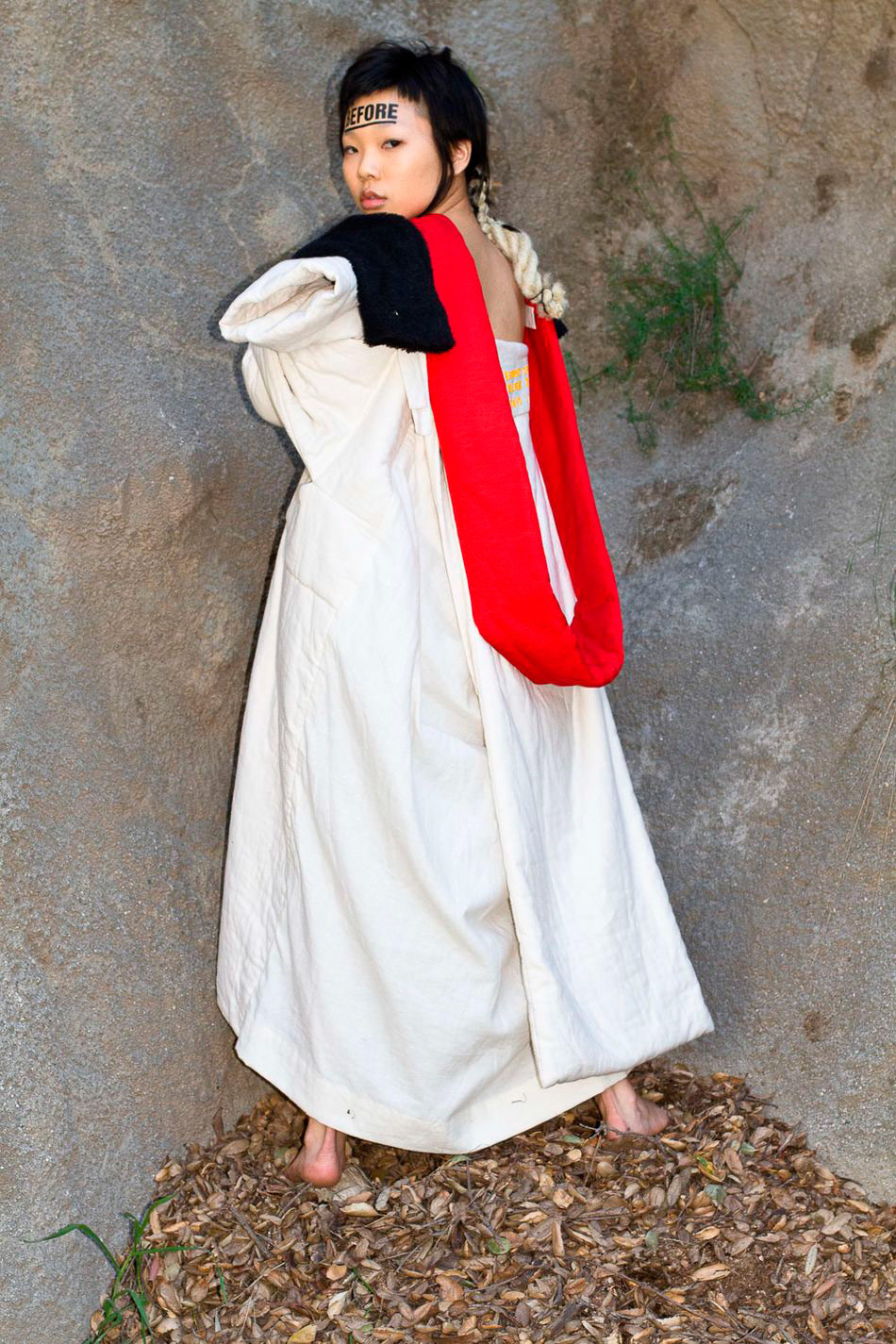 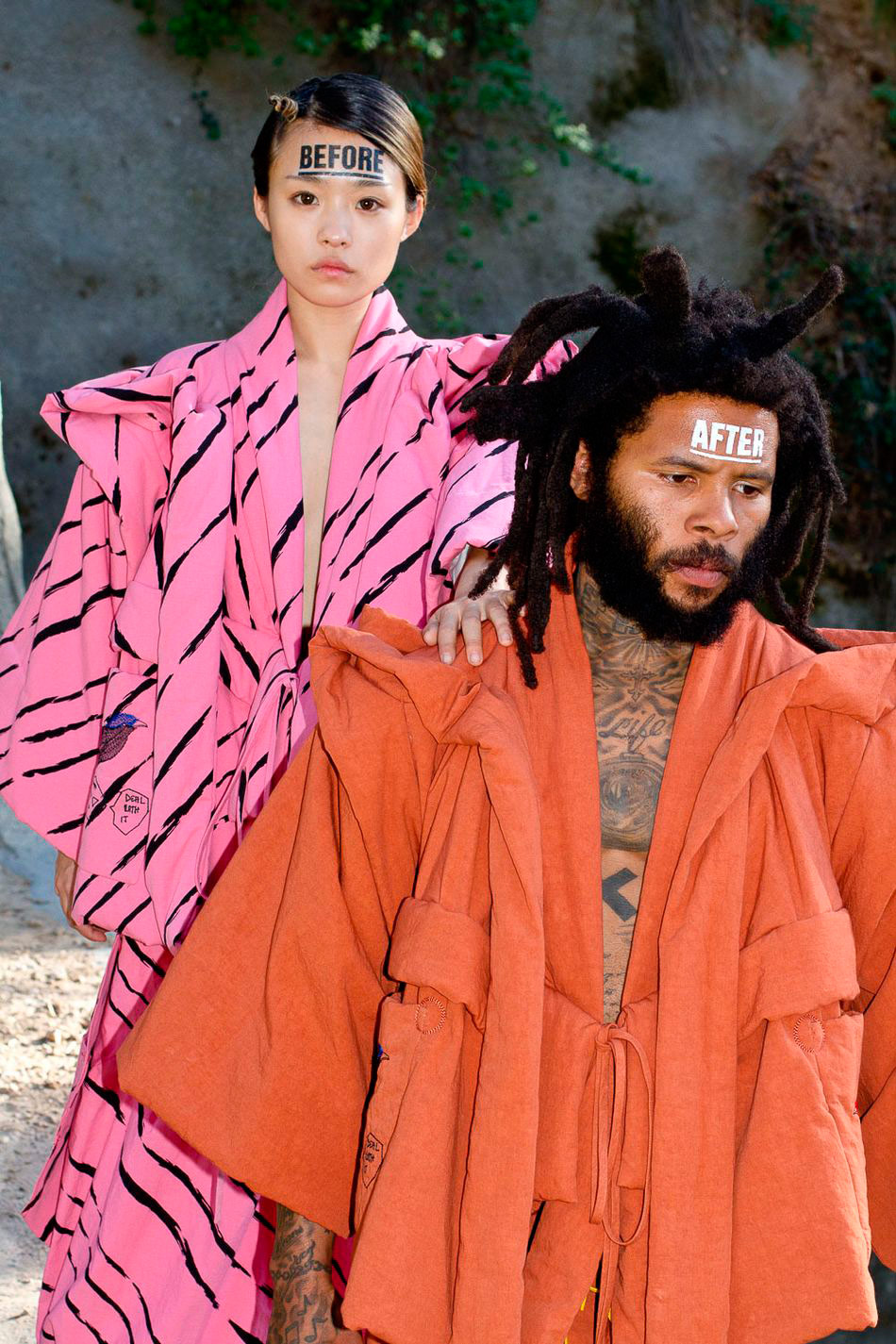 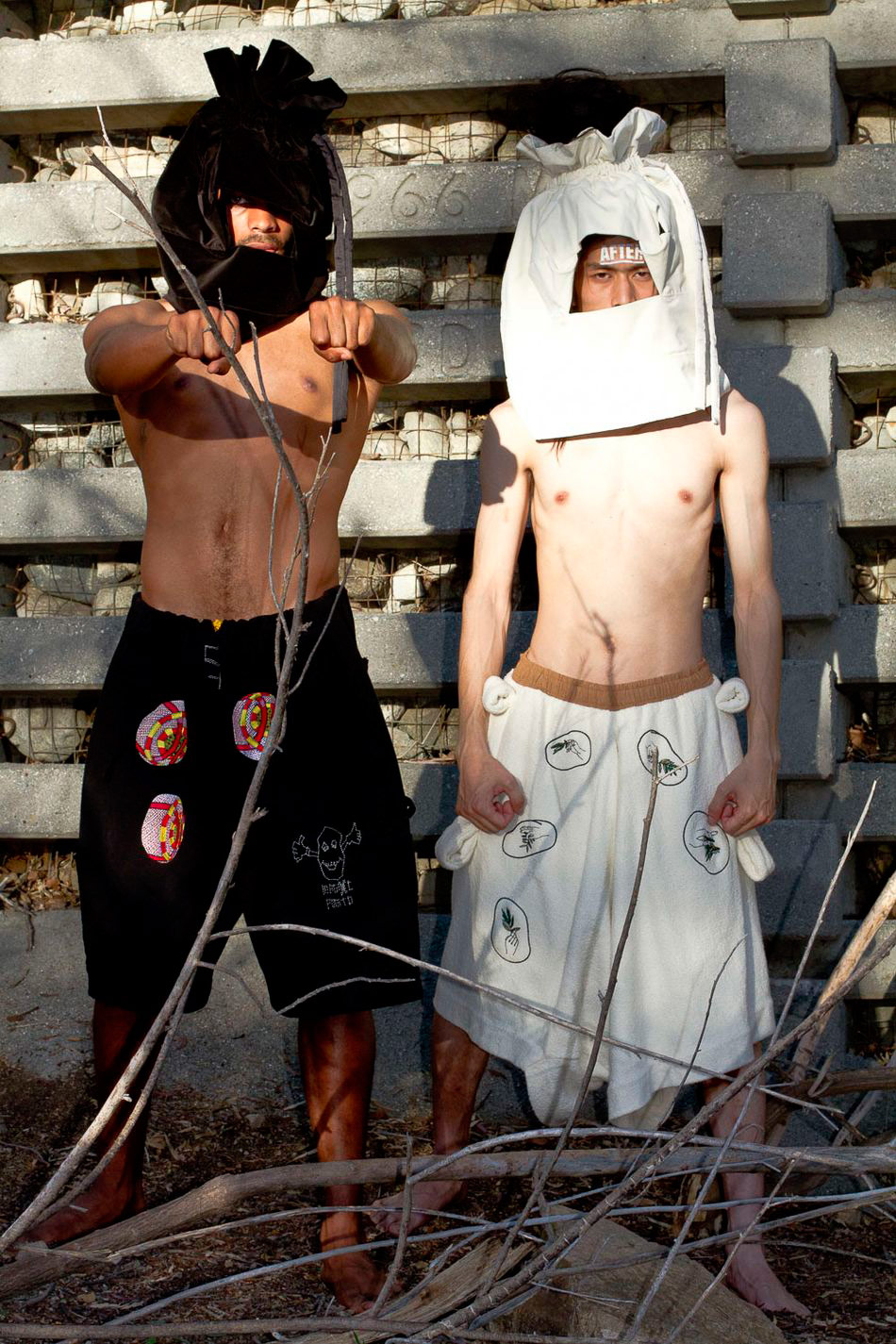 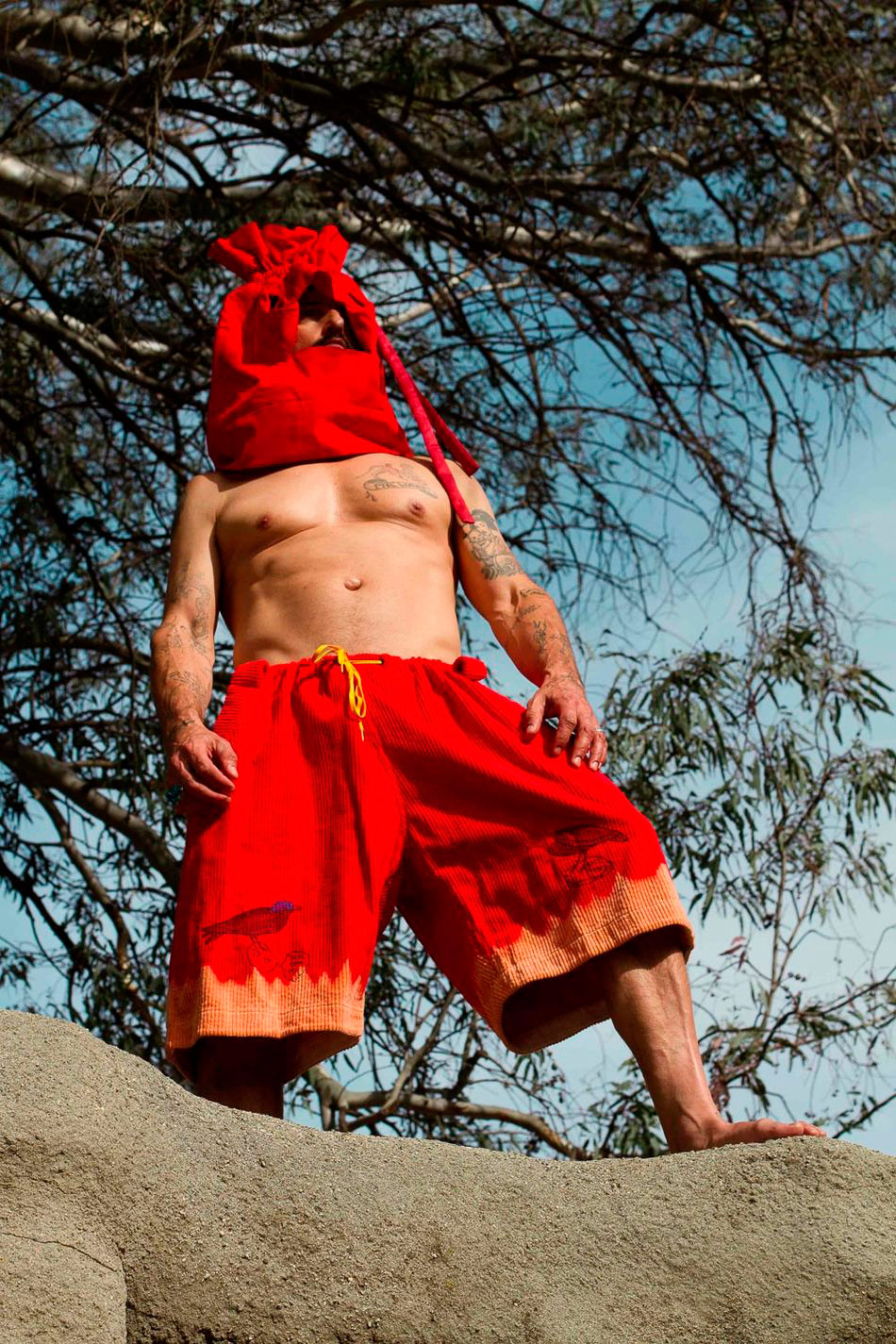 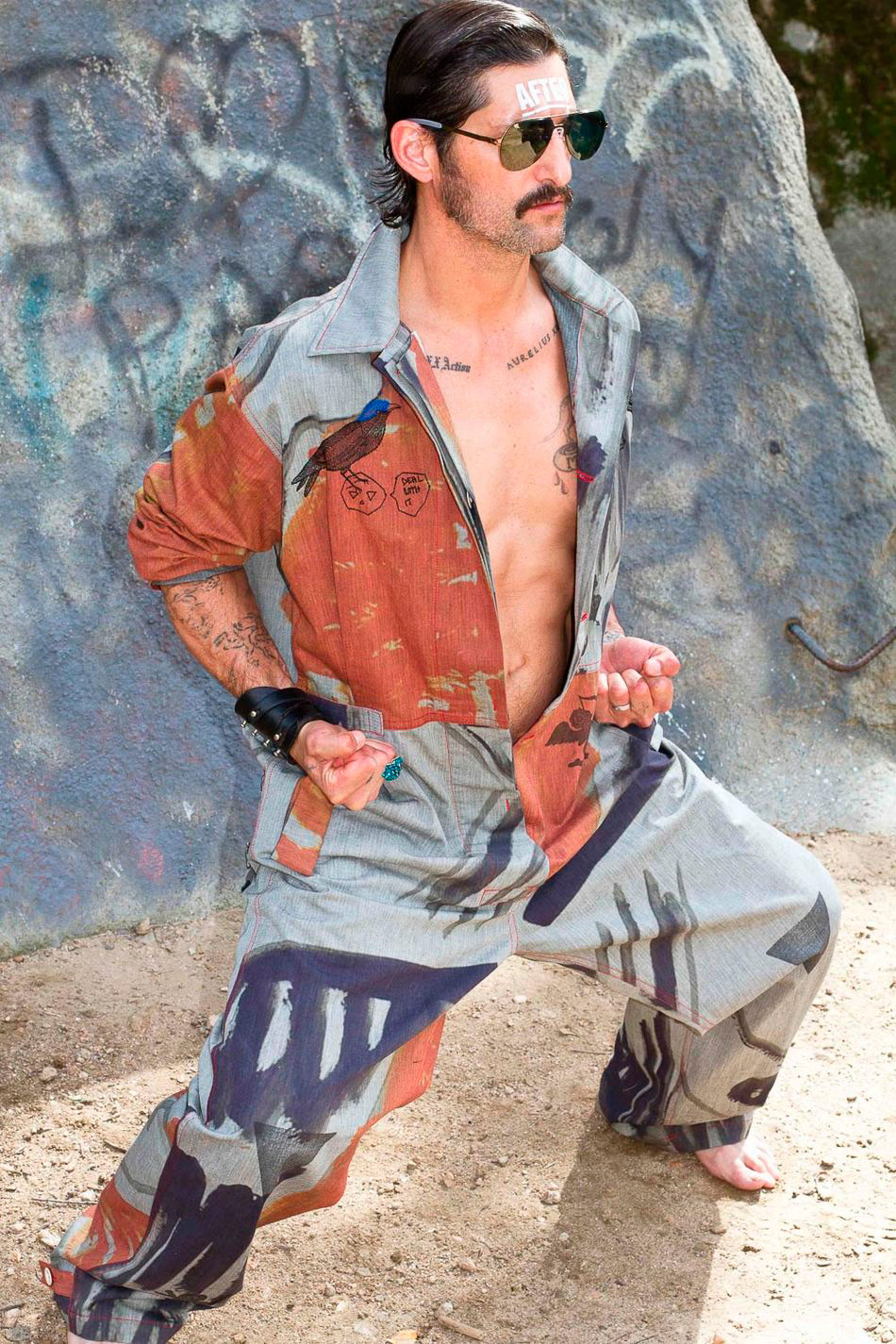 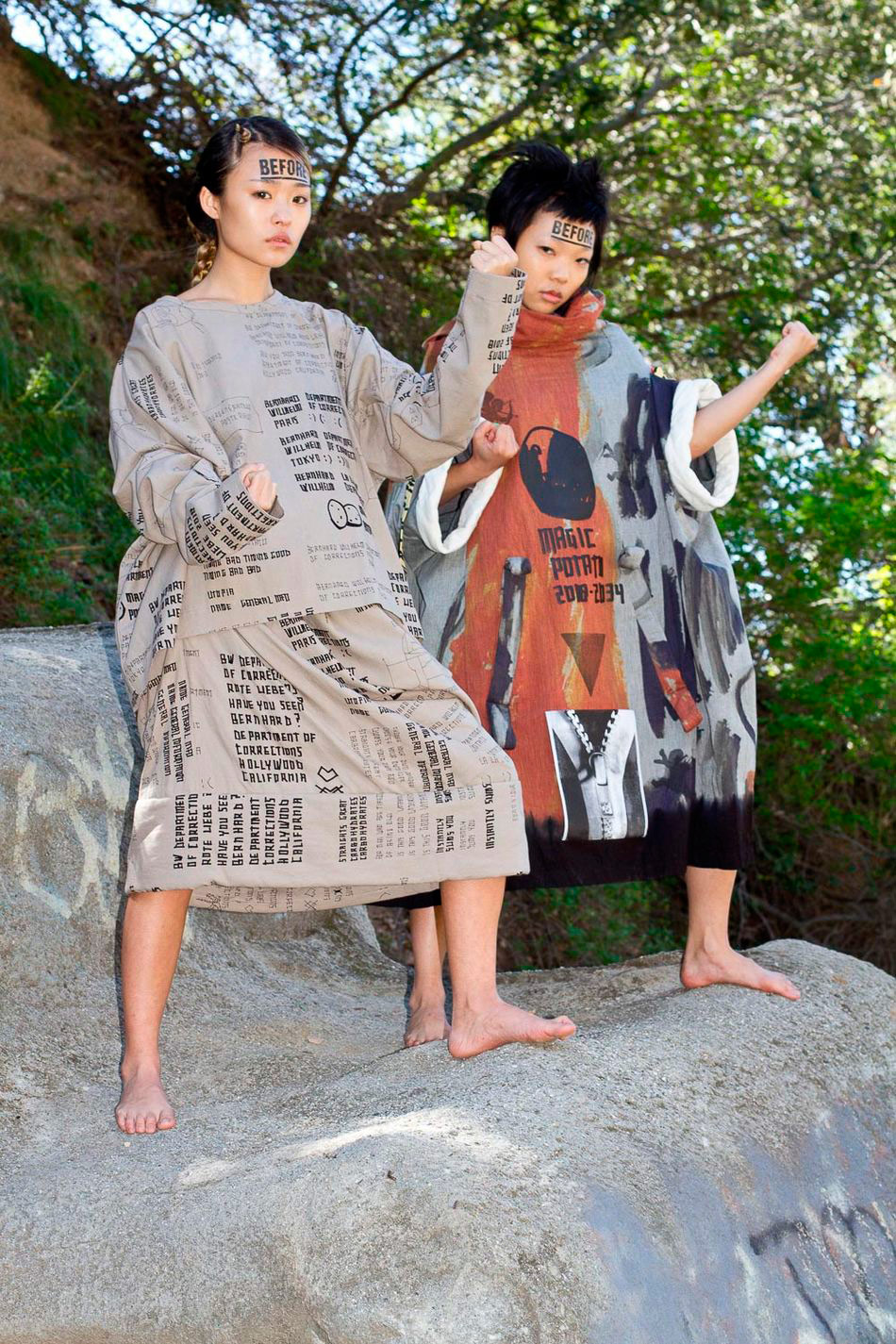 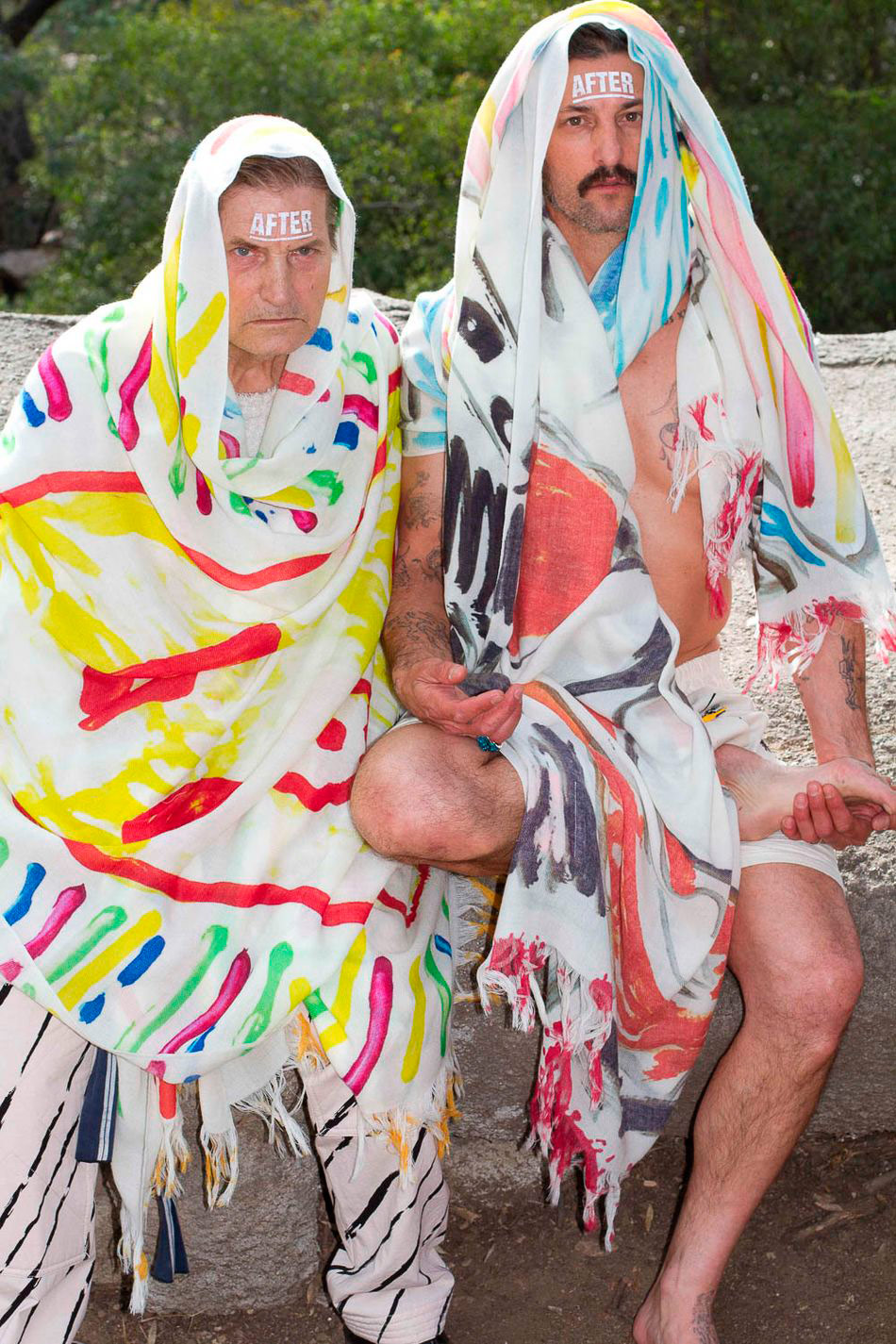 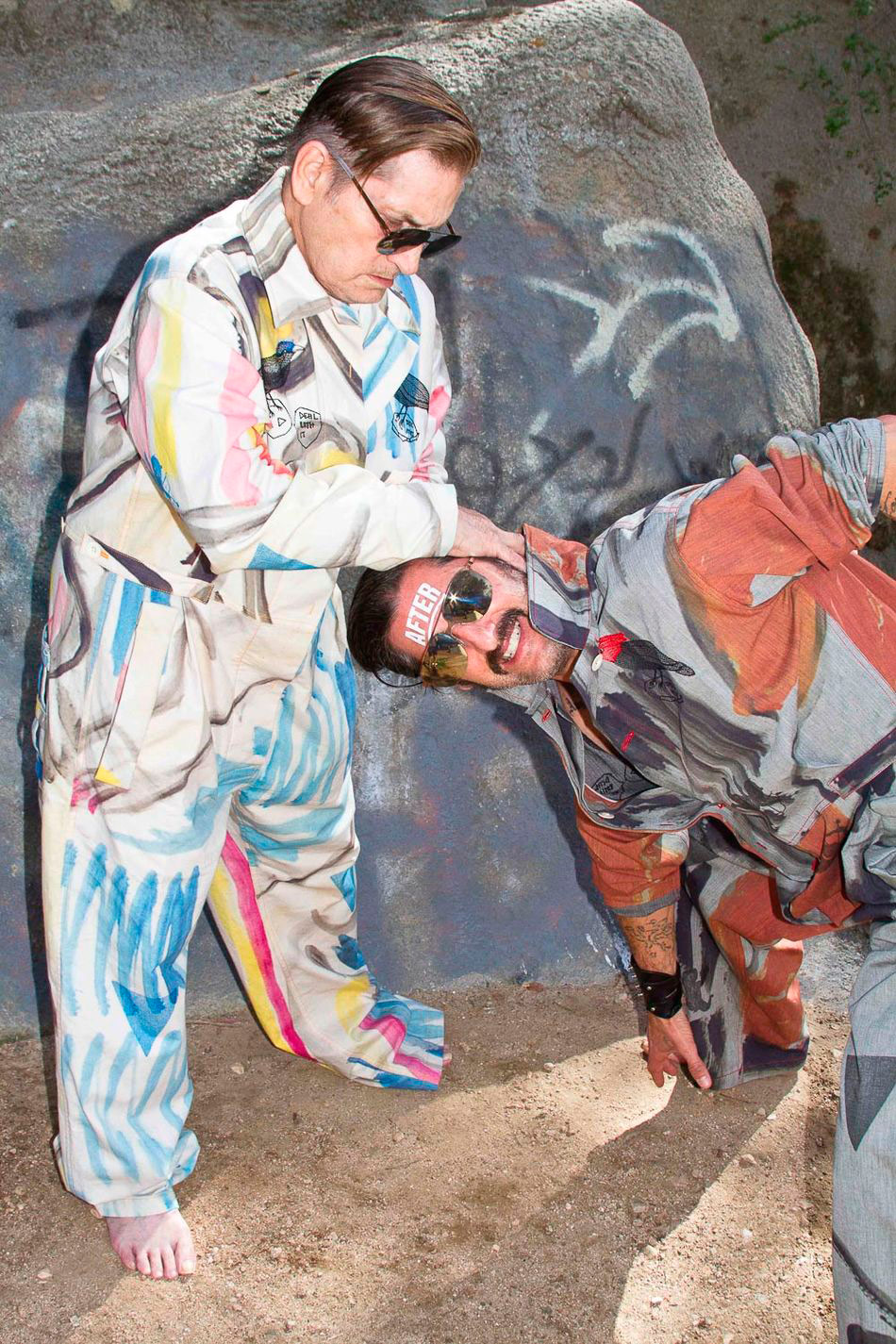