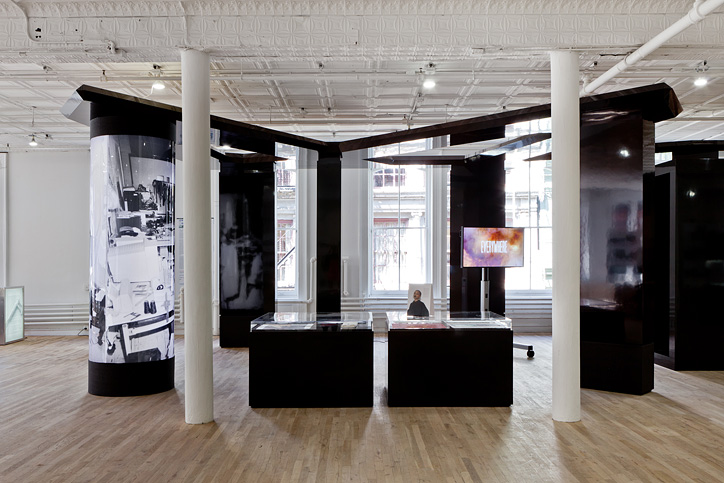 Since the late 1960s when New York’s Downtown became a playground for avant-garde artists, musicians, dancers and writers, the city has had a love affair with the edgy individualism of fashion and clothes – from the starlets of Warhol’s Factory, to Richard Hell’s ripped t-shirt. In the boom years of the 80s and 90s, the worlds of fashion and art became intertwined as commercial arenas; sites for posing challenging questions around identity and image. Today, the line between fashion and art is blurred as artists such as Seth Price and Rainer Ganahl produce clothing, and put on runway shows and collectives such as DIS, surf the cultural space between style and image-making.

At the apex of this history stands Bernadette Corporation – a collective formed in 1993 in nightclubs and art and design schools – who have occupied many identities: as fashion designers, publishers, filmmakers, writers, activists and artists. The group’s slippery, conceptual approach to all of these activities has consistently positioned them on the margins of the mainstream, while enigmatically defining the last two decades of cultural production in New York.

A retrospective of their work titled 2000 Wasted Years opened at SoHo’s Artists Space at the end of 2012, and is now on view at London’s ICA until June 9. The exhibition’s New York based curator Richard Birkett talked to METAL about Bernadette Corporation’s impact, and the contemporary relationship between art and fashion.

How did Bernadette Corporation form – were they artists who decided to make fashion, or fashion designers who became artists?

That’s an interesting question to start with and one without a clear answer! Bernadette Corporation has had many different members over the years and individually they could be described as designers, stylists, artists, writers, and filmmakers. But collectively these roles fall away… The principal members came together through organizing club nights, and they then designed a fashion line for four years that was as much a social performance as anything else. At a certain point in the late 90s, Thuy Pham – who now runs United Bamboo – left BC leaving behind two main members, Bernadette Van Huy and Antek Walczak, who were then joined by John Kelsey. At this point, the group’s interests veered towards the publishing of a magazine called Made in USA.

Despite calling themselves a corporation, BC seem to have had great influence in both the fashion and art worlds without “selling out,” and becoming overly commercial. Why do you think this is?

BC saw the idea of being a corporation as a way of creating a faceless image, a brand behind which anything could happen. They kind of appropriated corporate culture to get away from being artists or designers with clear identities. Their fashion line and the styling work they did in the early years exemplified this, ripping off other brands, turning away from high fashion towards ghetto chic and Pamela Anderson attitude models. They managed to both define a moment, and comment on what this idea of the “now” meant. Through the different things they’ve done they’ve maintained this split personality, and their influence has been in their ability to pose critical questions while being immersed without irony in the systems they challenge.

How did you approach the idea of a retrospective of their work? I was particularly interested in the photo shoot that featured heavily in the ICA version of the exhibition, which seemed to have been made recently but featured their old clothes.

It was always intended that the project would come from Bernadette Corporation, rather than us selecting works and putting on an exhibition without their direct involvement. The idea of a retrospective was kind of a challenge laid down by us – as a group they have always evaded a singular identity, yet of course when looking back, the tendency is to try and write a clear history. So BC decided to address this face on, by turning to other examples of ways in which cultural history is written or re-visited, such as the film reboot, or corporate brochures that spin a well-designed version of a brands history. The exhibition included many different aspects of their activities over the last twenty years, but hardly any in their original forms. The photoshoot was one important element of this – they decided to produce a magazine “lifestyle” shoot that included visual cues to much of their work, from the clothes (that had to be remade for the occasion), to the styling, to video works, magazines, books, photographic prints and sculptures that appeared as props. The images from the shoot appeared in the exhibitions as large-scale vinyl prints, and also became a feature in a recent issue of Purple magazine, a publication that featured a lot of Bernadette Corporation projects in the 90s. The whole exhibition, and the publicity and events around it, became like a hall of mirrors!

The look of the show was definitely highly designed, with a large black-gloss pop-up store architecture dominating the space. How does this relate to the grungy aesthetic of Bernadette Corporation’s clothing, or the anti-capitalist stance within their films?

They wanted to follow the idea of the slick, corporate reboot through to its logical conclusion, which for them meant handing over the spatial design of the exhibition to an art director. They worked with a great designer called Gideon Ponte, who typically works for fashion houses such as Chanel and McQueen to design runway shows, or stores. He came up with these amazing glossy gothic structures that look like they’re straight out of a high-end airport lounge! They also commissioned a film production house to turn their most infamous video work, Get Rid of Yourself, into a pumped up Hollywood-style trailer. Given the film is partly a documentary on the anarchist group the Black Bloc, it’s an incongruous move. But behind all these decisions was a recurring interest in the paradox of stylistic vacuity – that an emphasis on surface dispels all sense of individuality, providing a context for collectivity.

The exhibition has gained a lot of interest and coverage from both the art and fashion worlds. Does this relate to a current obsession in both worlds with the 1990s, from the return of grunge on catwalks to the NYC 1993: Experimental Jet Set, Trash and No Star exhibition at the New Museum in New York?

Perhaps, but I think Bernadette Corporation have approached this retro-nostalgia in a challenging way – rather than trying to claim any stylistic influence, or position in art and fashion history, they’ve used this opportunity to ask important questions about how artistic production relates to commerce and politics. We have such a heightened sense of what it means to be “contemporary” these days, that the fetishising of our recent cultural history creates these weird glitches that BC exploit to great effect. They prompt us to ask how we can find critical distance, both on the things we do as individuals and on the social structures that we function within. 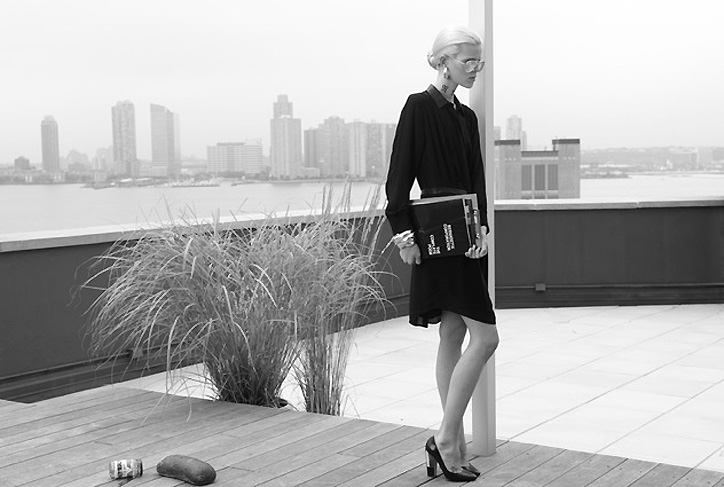 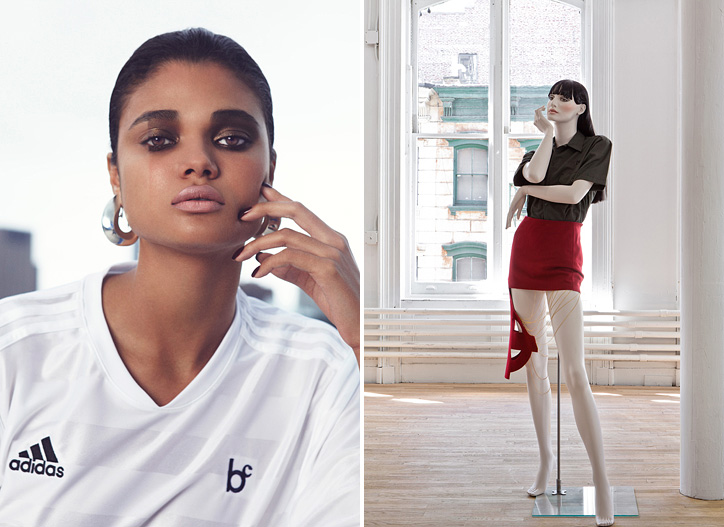 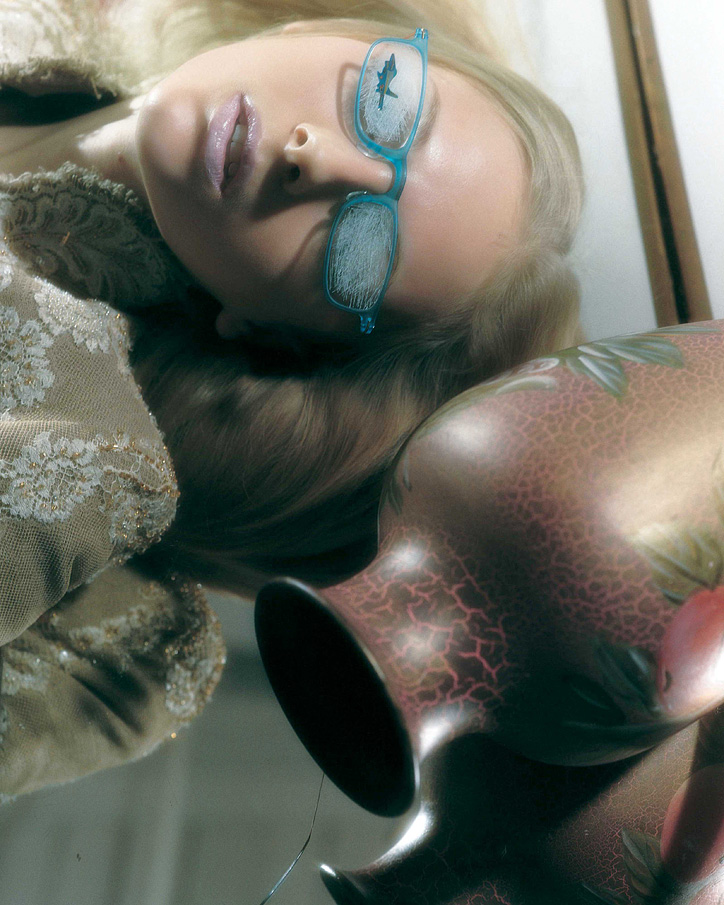