The essence of individuality 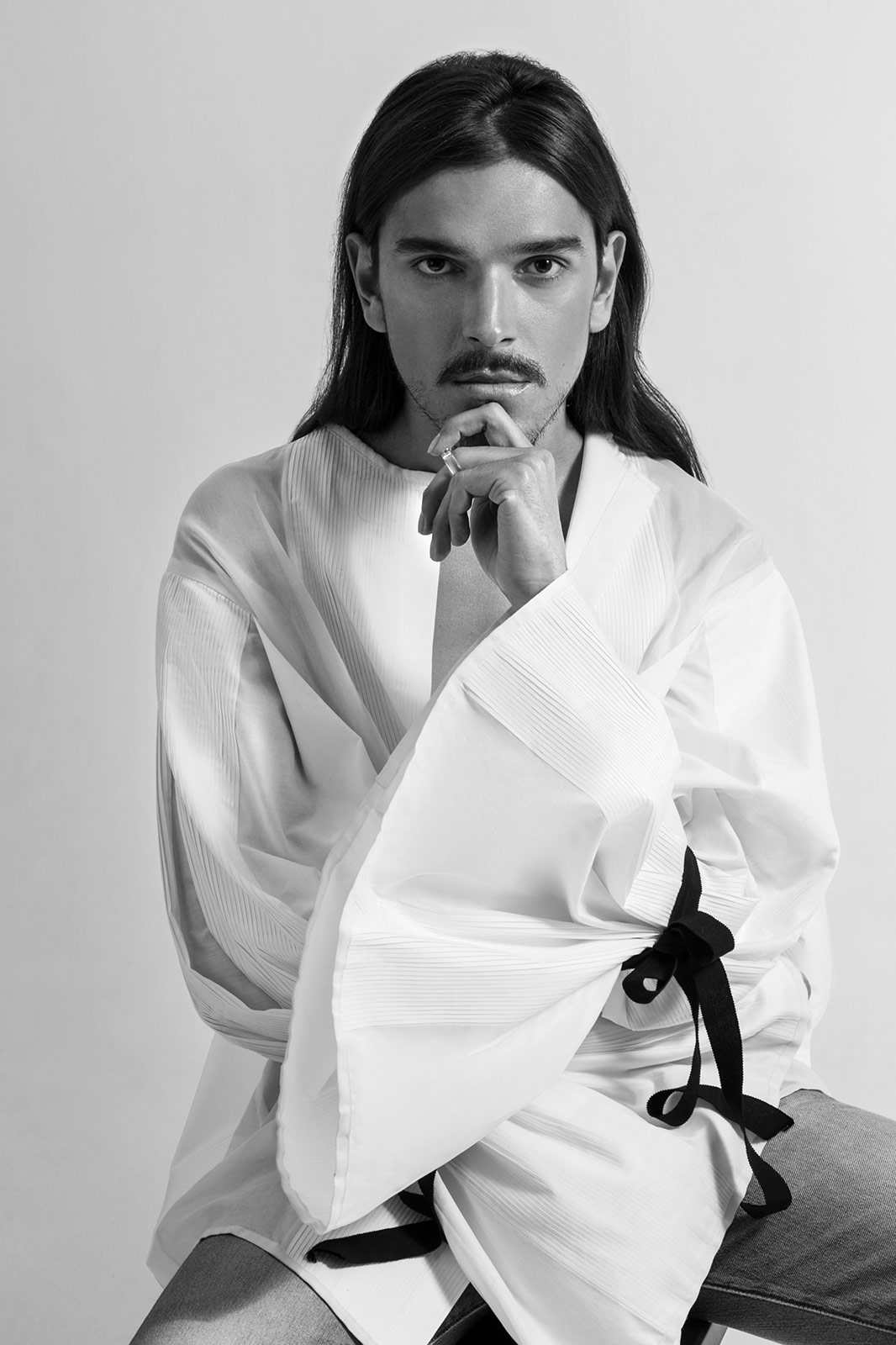 Nikita Kalmykov is a Moscow-based designer that gained momentum in the fashion world by being a contestant on Project Runway Russia. But he’s gone much beyond that in these past years. Drawing inspiration for his brand, Atelier Odor, (represented by Nob), from olfactory connections and a desire for beauty in the face of prohibitive and antihuman sanctions in Russia against the LGBTQ+ community, his designs combine harsh reality with nostalgic romance. The latest collection Kalmykov released finds inspiration from war documentary They Shall Never Grow Old, and is entitled Under Attacks. We speak with him about romance, politics, and the war.
Nikita, for those who don’t know you, can you describe yourself in three words?
Pessimist, hedonist, perfectionist.
What drew you to fashion? When did you know you wanted to become a designer?
Art was all around me during my life – and it still is. My mother is a teacher of arts. Special books and paintings were everywhere around me. She discussed with me art history, great artists and gave me any materials for creativity I needed. Art was the only thing my not rich family did not spare money for. So the only question was which direction in art to choose, and after I saw a few Galliano shows for Dior, I decided to be a fashion designer.
You appeared on Project Runway Russia, can you tell me what that was like? What was your highlight of participating?
That was a really exciting journey, an incredible experience. As a small-town boy, I never even dreamed of appearing on TV. When I passed all the casting stages, I understood this was my chance to test myself. During the project, I created many good garments under tight deadlines and nearly reached the final. The most difficult yet interesting was to adapt my own style to the terms and competitions. This very skill along with my individual style became my advantage on the project. 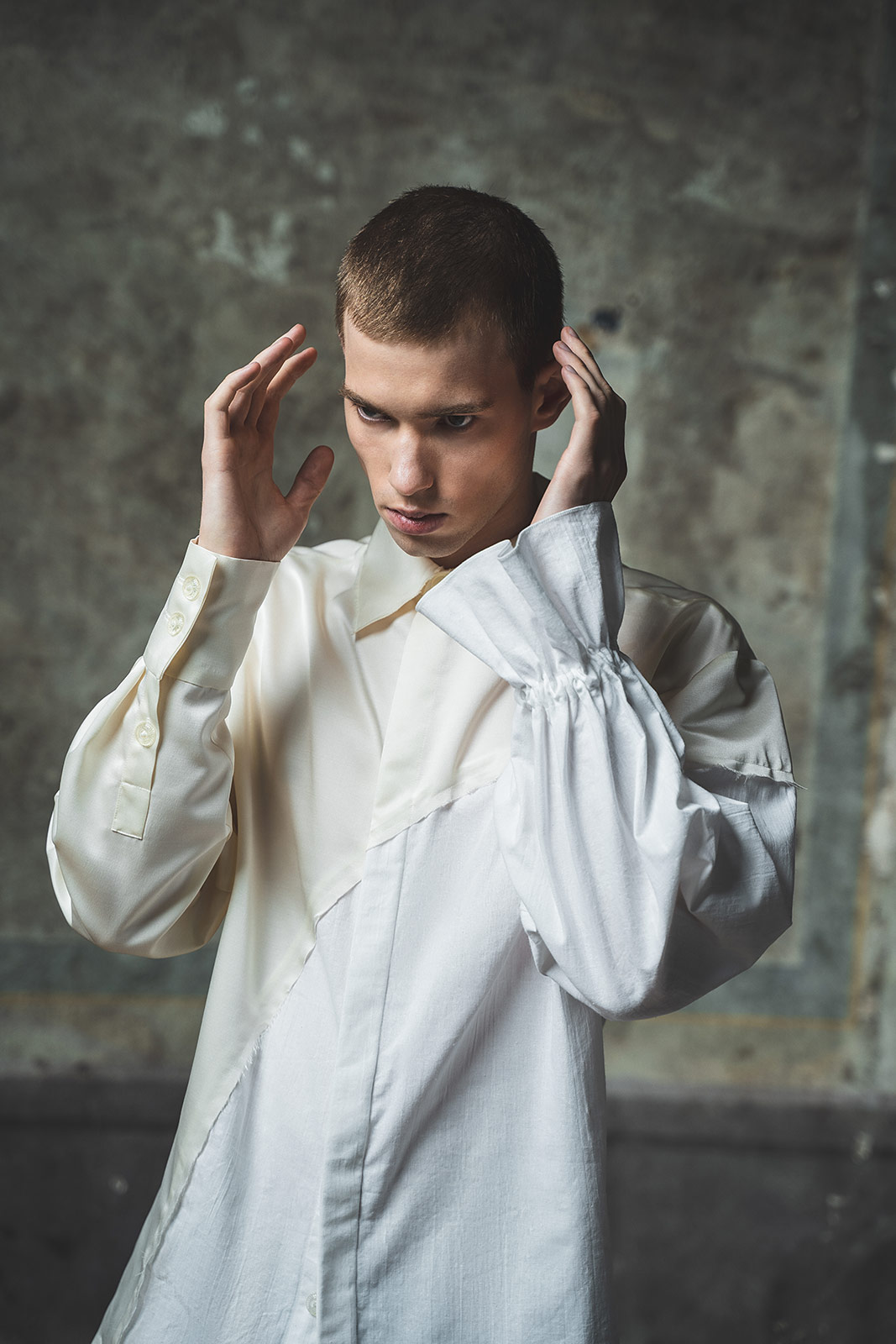 You stated that the inspiration for Under Attacks, your Spring/Summer 2020 collection, came from Peter Jackson’s They Shall Never Grow Old. What drew you to this documentary as a source of inspiration?
When I saw this movie, I realized many aspects of the war I had never thought about before. For instance, any soldier is a regular young guy who lived his carefree life before the war. Or how much does any person who goes through such ordeals change. It is such a juxtaposition of youth and experience, tenderness and crudity, modesty and courage. This is so close to my designs, where there’s always a place for contrast and contradiction.
This collection features a romantic and nostalgic sense of youthful innocence that contrasts the harsh brutality and darkness of the war. Was it difficult to uphold that sense of romance and youthfulness while commenting on cruelty?
This is my usual technique. There’s always a contraposition of tenderness and ease to sharp lines and hypertrophied silhouettes, matte and gloss textures, vintage fabrics with history and modern sewing technologies. There is a lot of male nudity in my photoshoots. This is to emphasize the uniqueness of any person through essence. Besides, a melancholic mentality along with the irresistible urge for beauty and hedonism are inherent for me personally. Therefore, the film concept and atmosphere formes the basis of my new collection.
There are many intricate details featured in this collection, from the Richelieu vintage lace to metal accessories and natural baroque pearls on silver chains. Is there a piece of detail that is your favourite within the collection?
Yes, it’s the teardrop baroque pearls at the tips of collars and trousers. They were made as a metaphor of frozen tears, a romantic reference to the movie and concept. 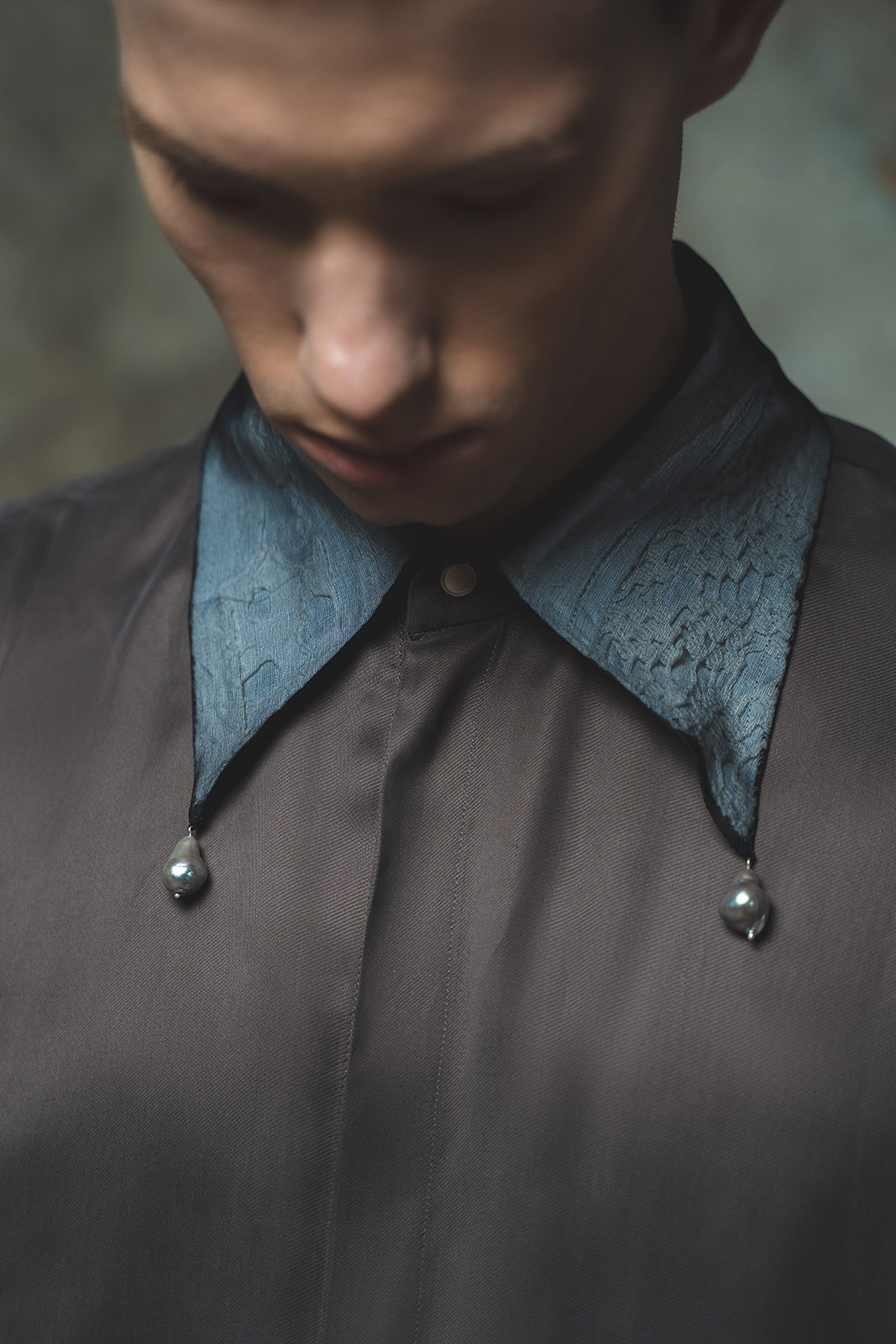 What inspires you to create? What shuts your creativity off?
I am inspired by people, and when I speak of scents, odors, I mean exactly olfactory associations with particular individuals. I am also thrilled with travelling, unexpected occasions I get involved in, or multi-sensory atmospheres that form around me. Every detail is important to me, and when everything shapes into a harmonic picture, then it's time to create a new collection. I am always in search of the unknown and stimulating new. The only thing that can let me down and knock me out of my working rhythm is people’s anger and disgust of the surrounding.
Social media has become a large aspect of marketing within the fashion world, what’s your take on social media and fashion?
Despite the importance of social media, I’m not really good at them. The main thing for me is to create harmonious, informative images. Promotion is the last thing I’m thinking about. I believe that everything will come by itself.
How has your time in the industry influenced you as a designer?
I understood that this is a very difficult and exhausting work, where the most important aspects are communication and interaction with people, which is also something I’m not very good at. So I had to become more sociable and active. Also, I understood the importance of a clear brand DNA and conceptual wholeness in each collection. Today, there’s nothing more important than identity and author perception. 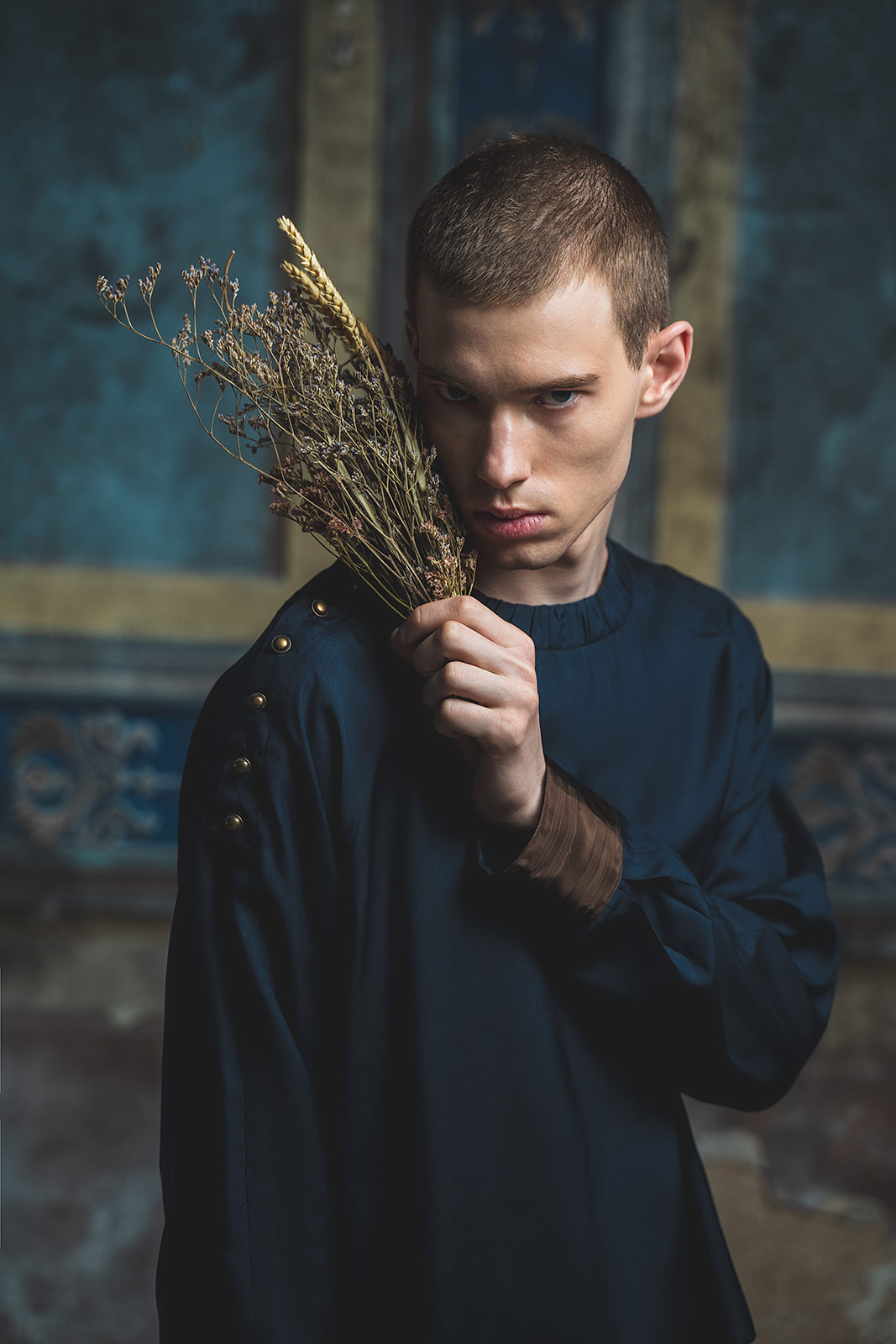 Are there any up-and-coming designers on your radar that we should watch for?
I’m not following new designers, don’t watch their collections. For me, only some certain ideological inspirers who affect me with their style and personality matter.
Your collections often push boundaries, promoting genderless clothes and designs for all. With the anti-LGBTQ+ politics in Russia and the constant violence that the community suffers globally, your fluid collections act as a form of resistance. How does being a Moscow-based designer influence Atelier Odor? What effects do politics have on the fashion industry?
Any prohibition generates action. The more prohibitive antihuman sanctions there are, the stronger the aspiration for freedom and self-expression they generate are. All this anger, ugliness, and stupidity create desire for beauty, creativity, and self-improvement. It may seem that Russian laws affect personality more than fashion, but an oppressed personality is a consumer and is the main figure in the industry. It is hard to work with timid and intimidated individuals. Thus the majority of Atelier Odor customers are from Europe and the United States. What I know for sure is that these aspects will never affect my style, my sources of inspiration and my concept fullness.
What’s the future for Odor? Have you found inspiration for future collections or projects?
The new line of Odor is around the corner. Also, using new techniques, complex materials, historic details. The next collection is in development. It was inspired by a young boy with a deliriously beautiful name who lives in Eastern Europe slums. I can’t tell more. 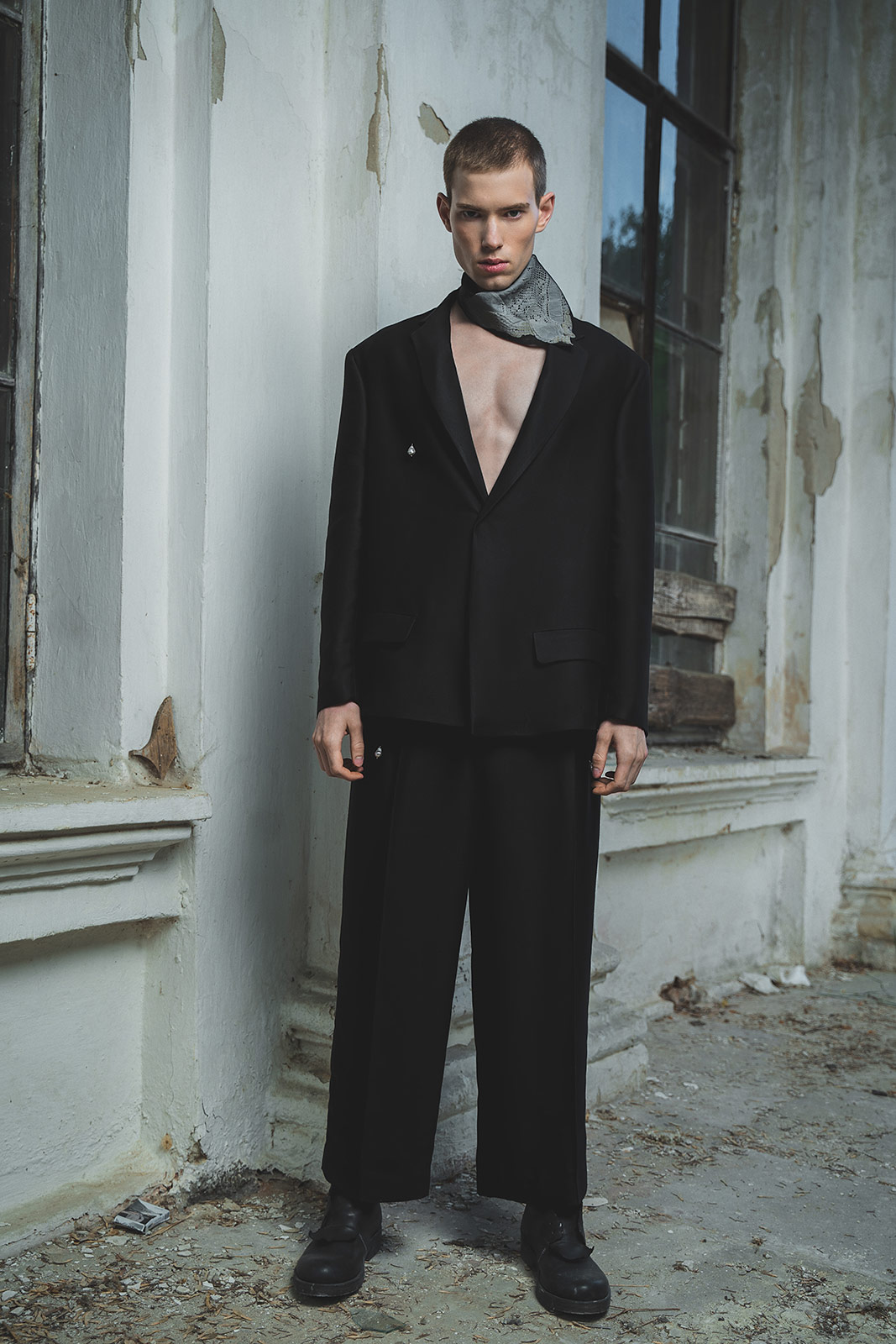 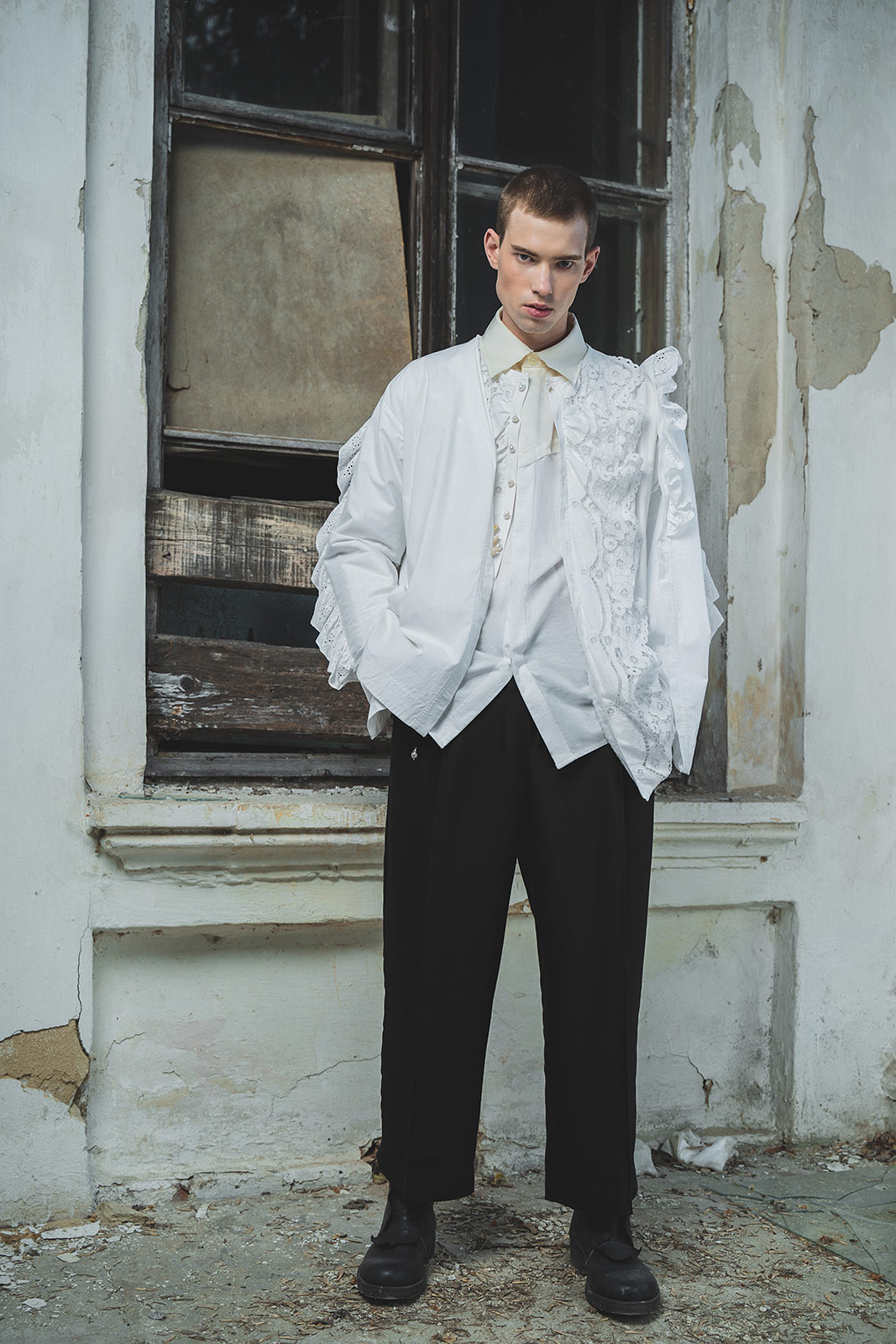 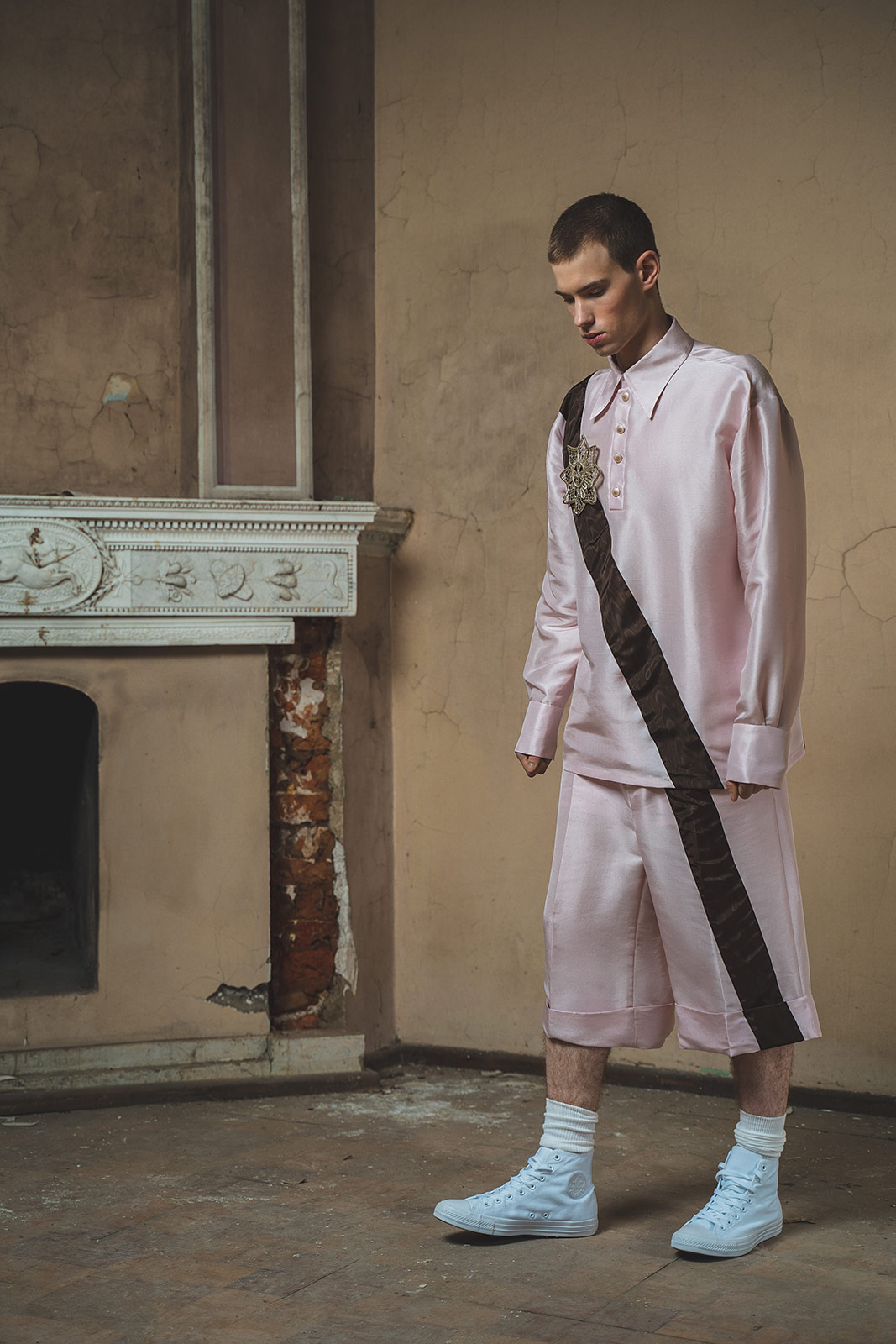 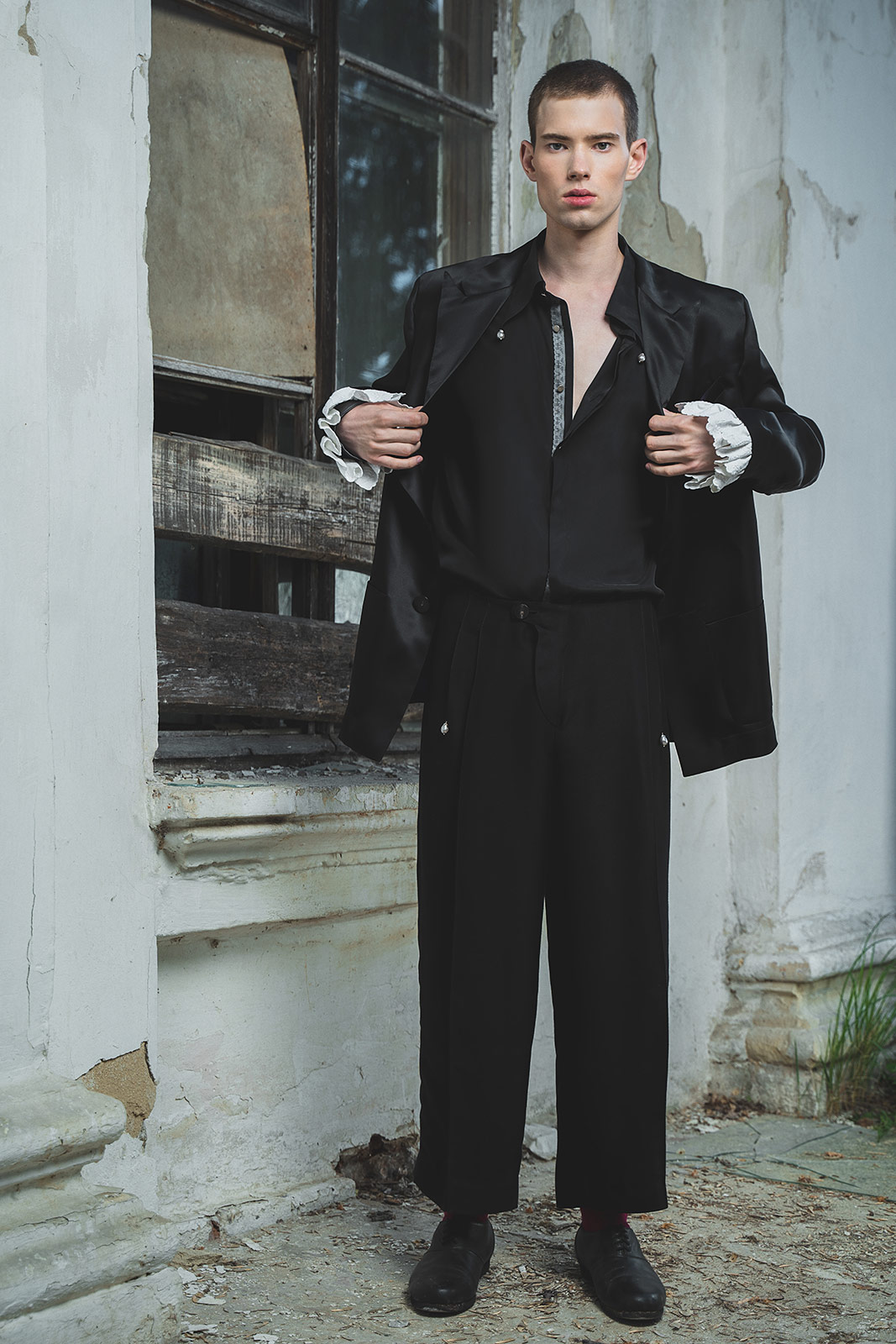 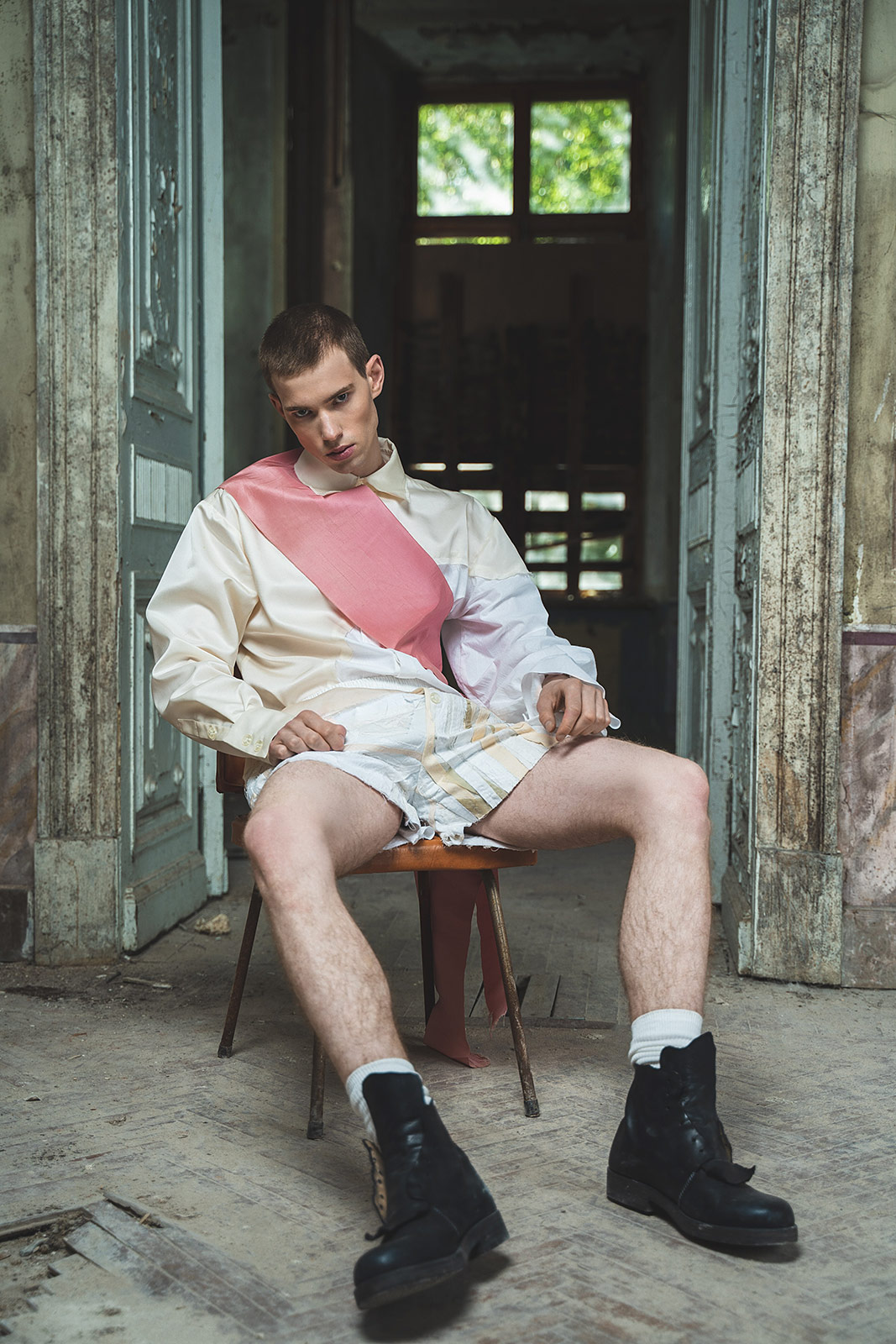 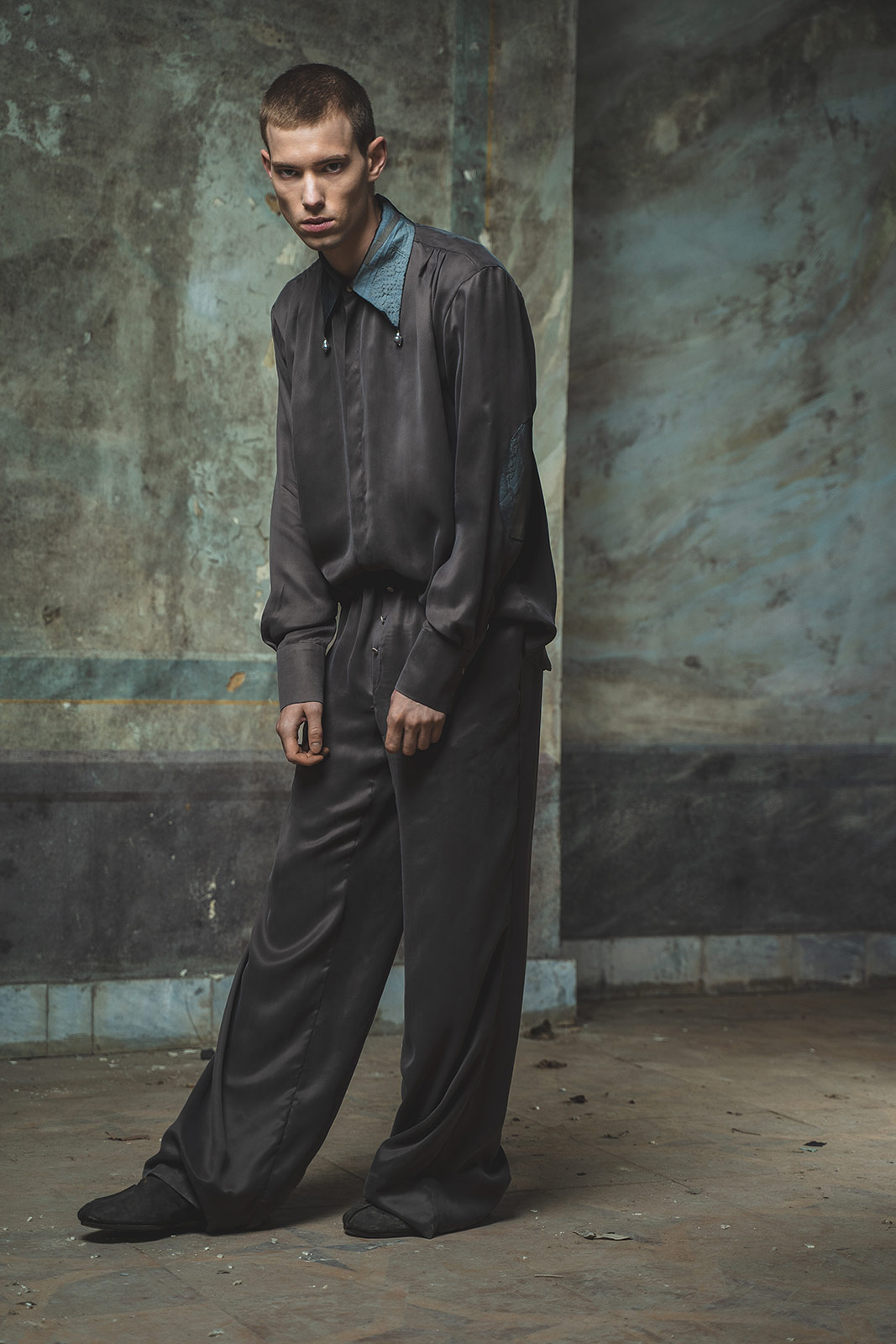 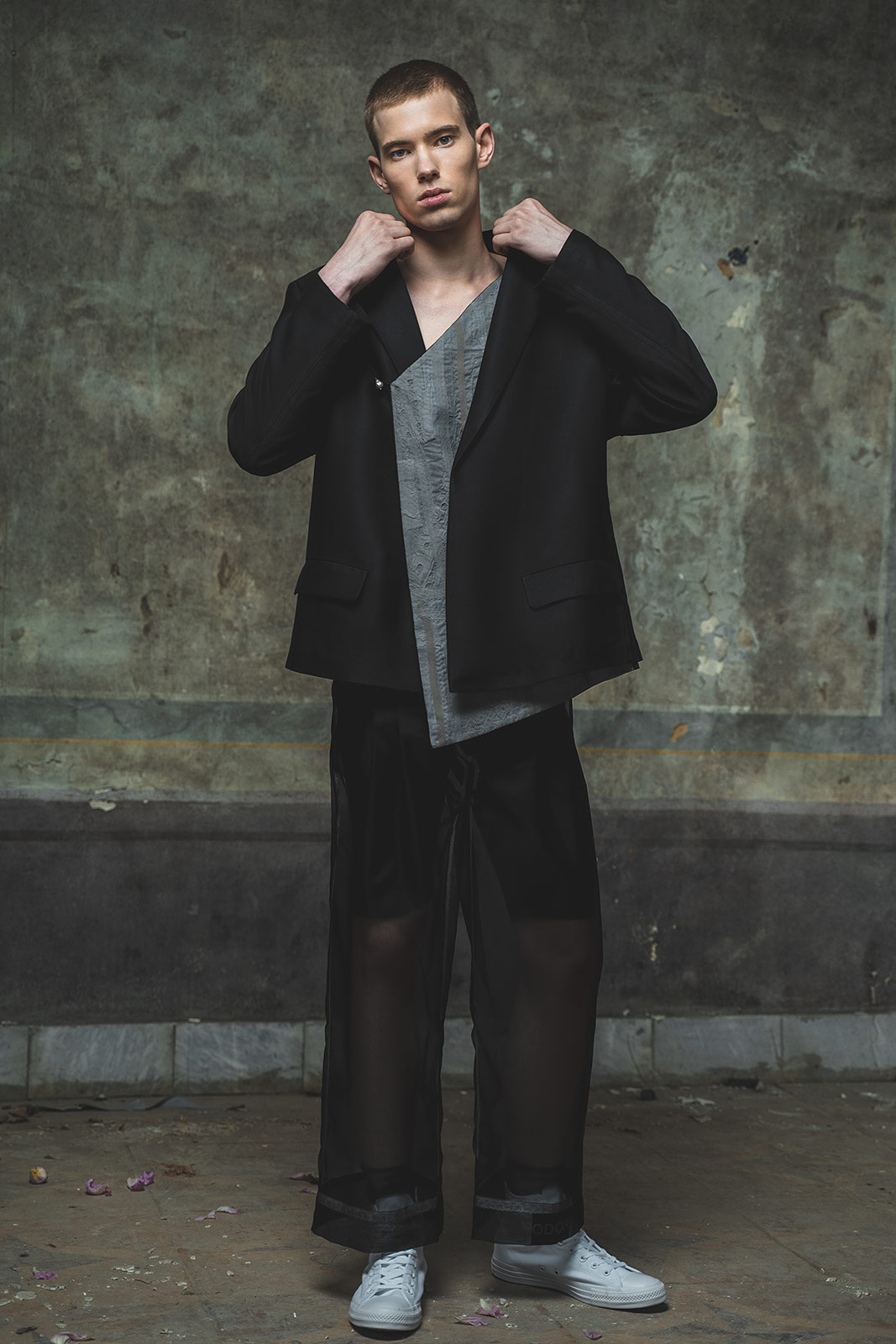 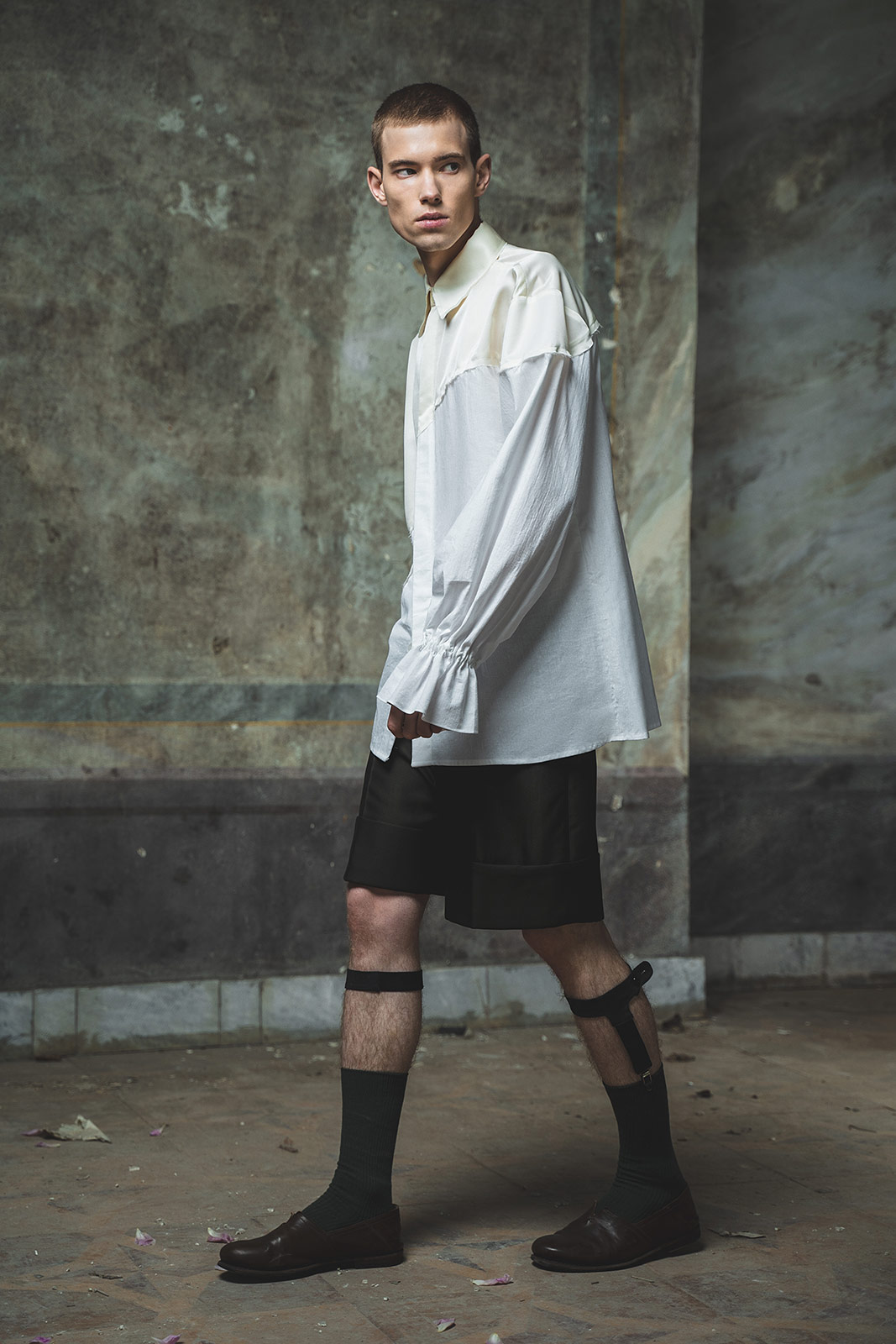 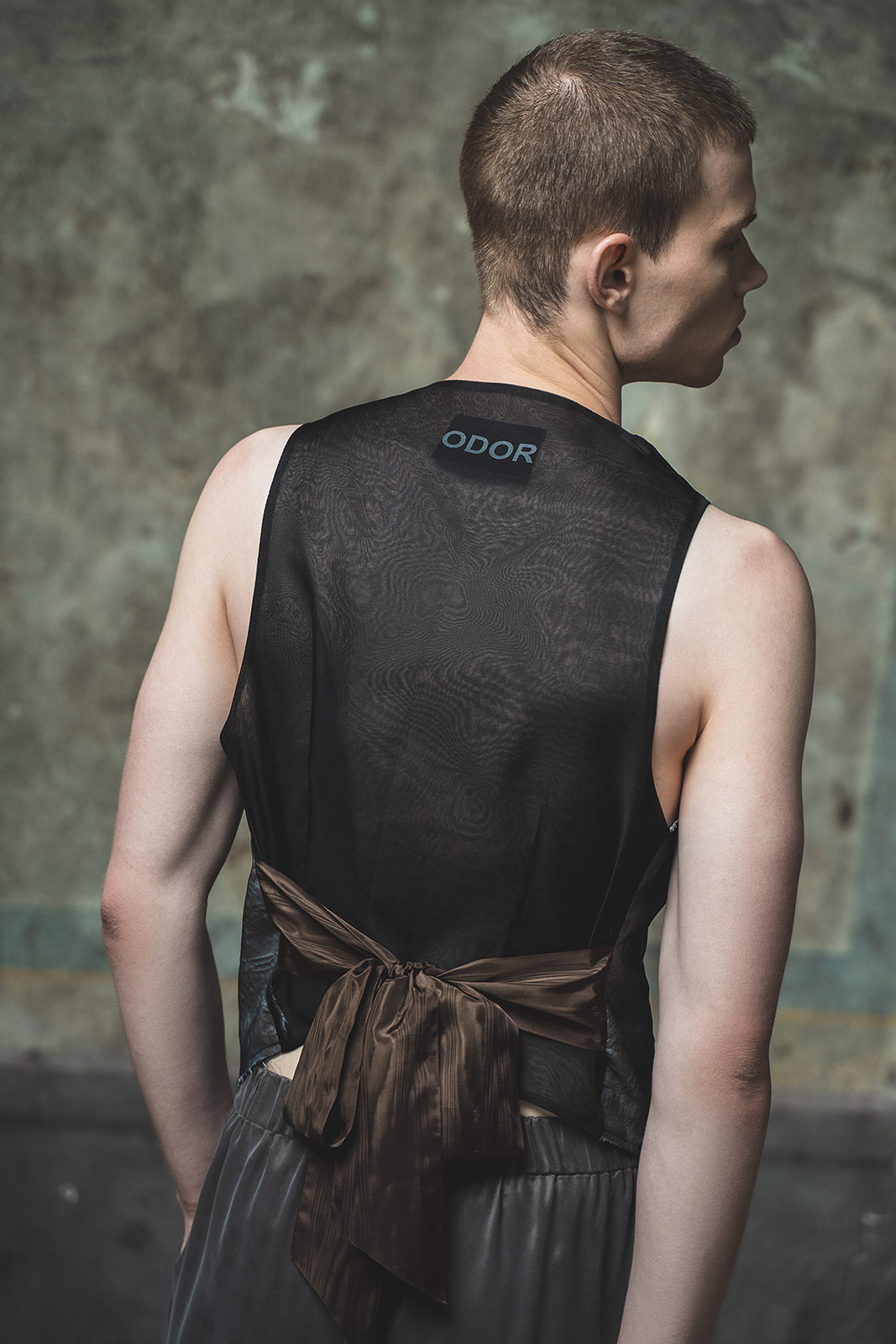 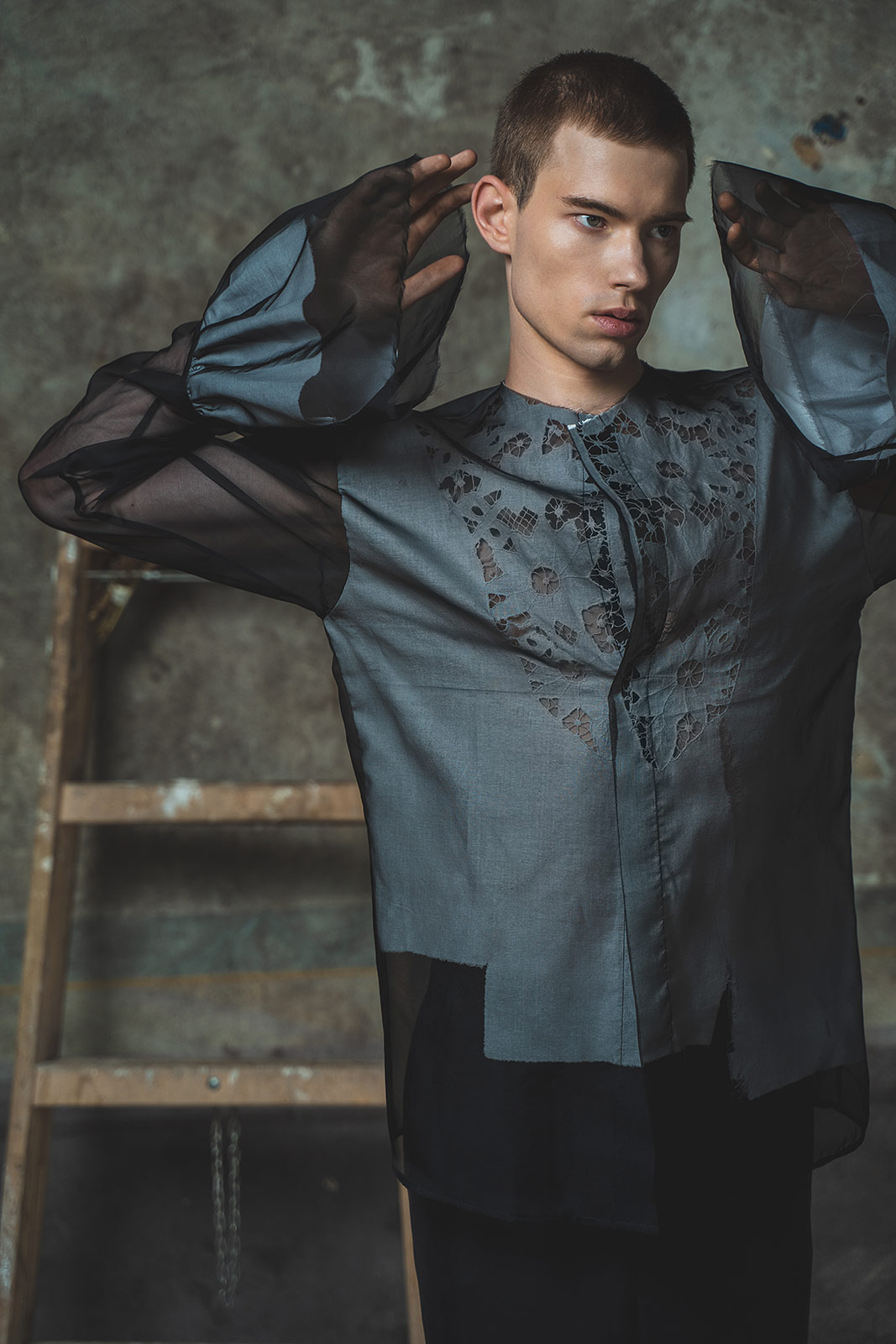 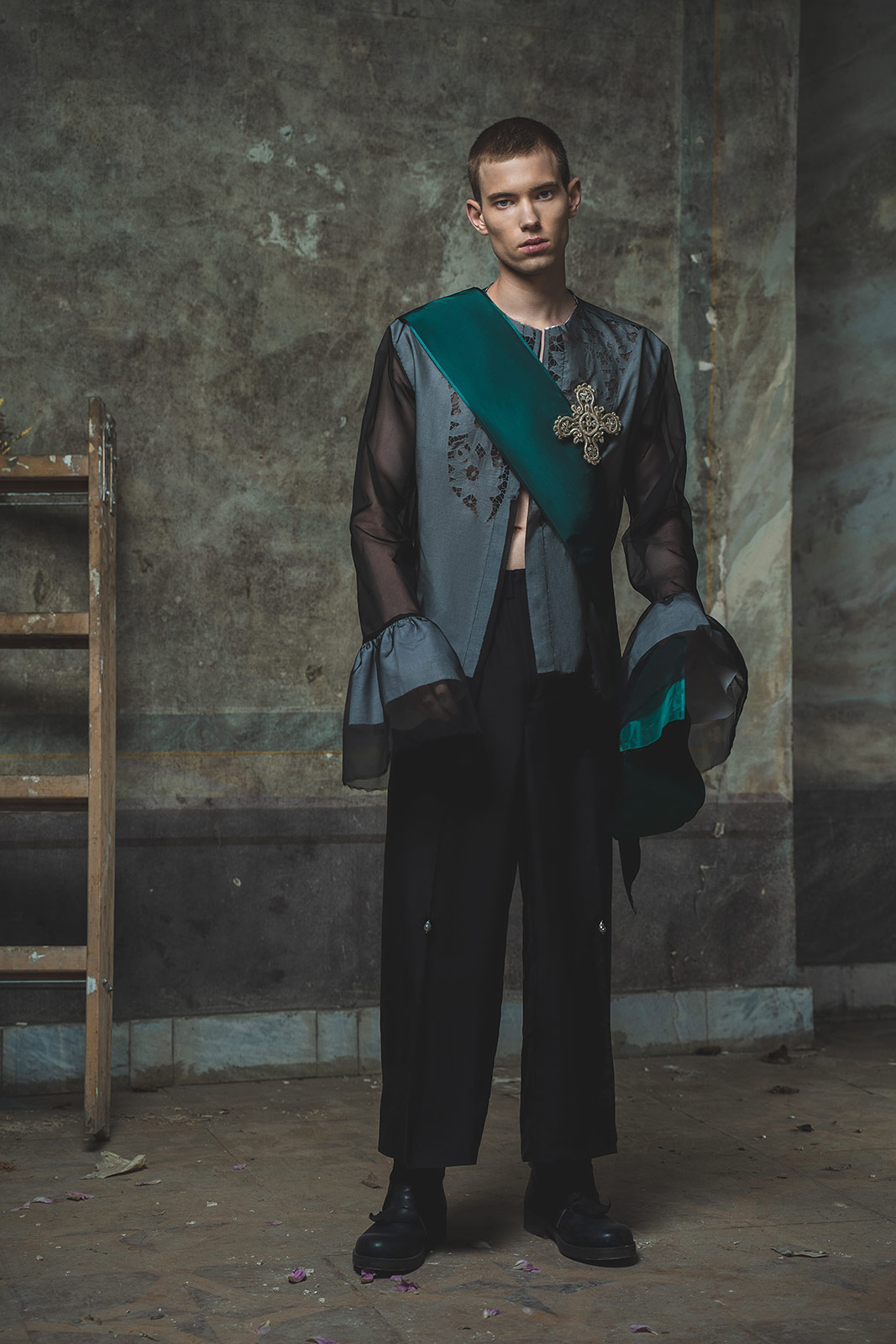 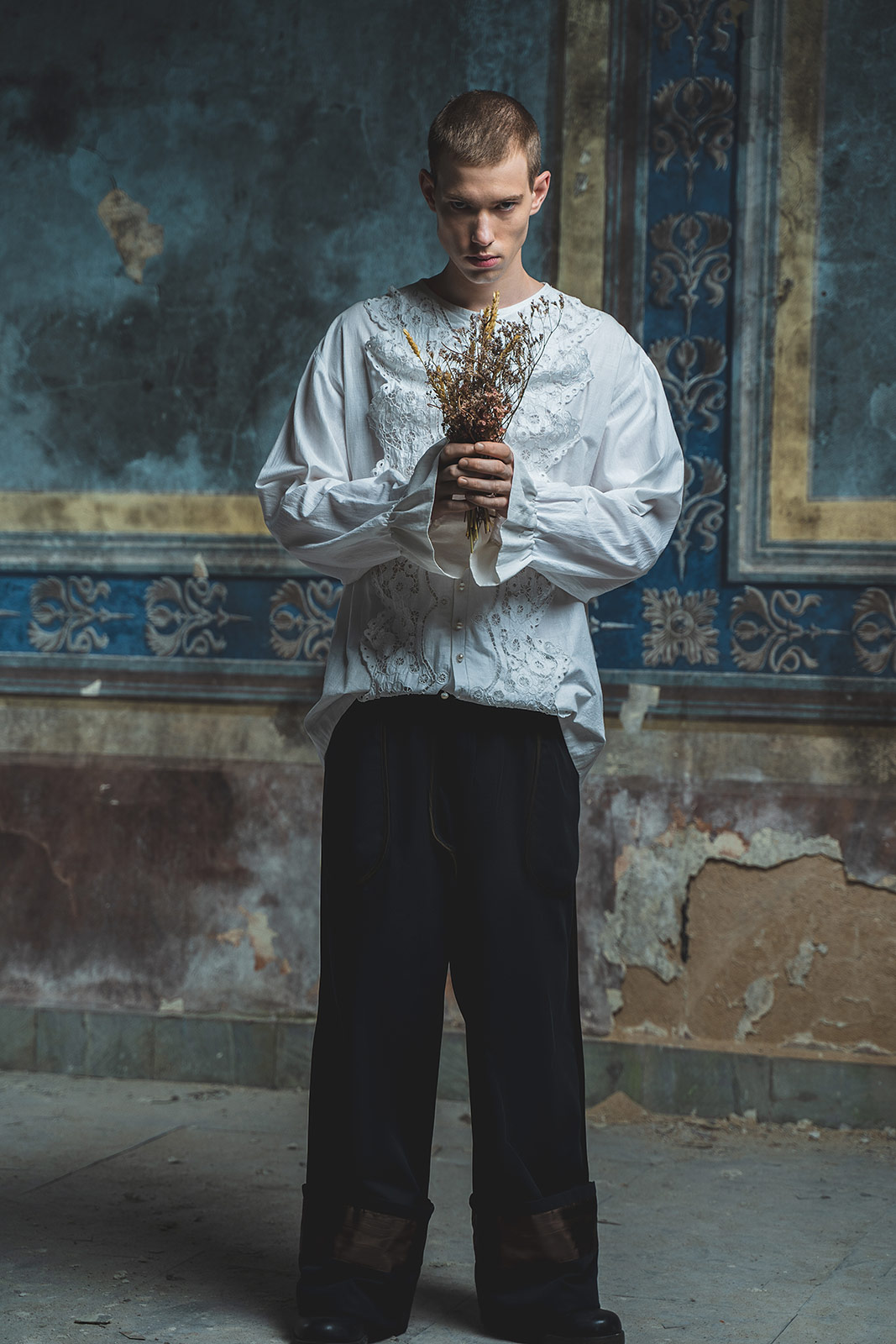 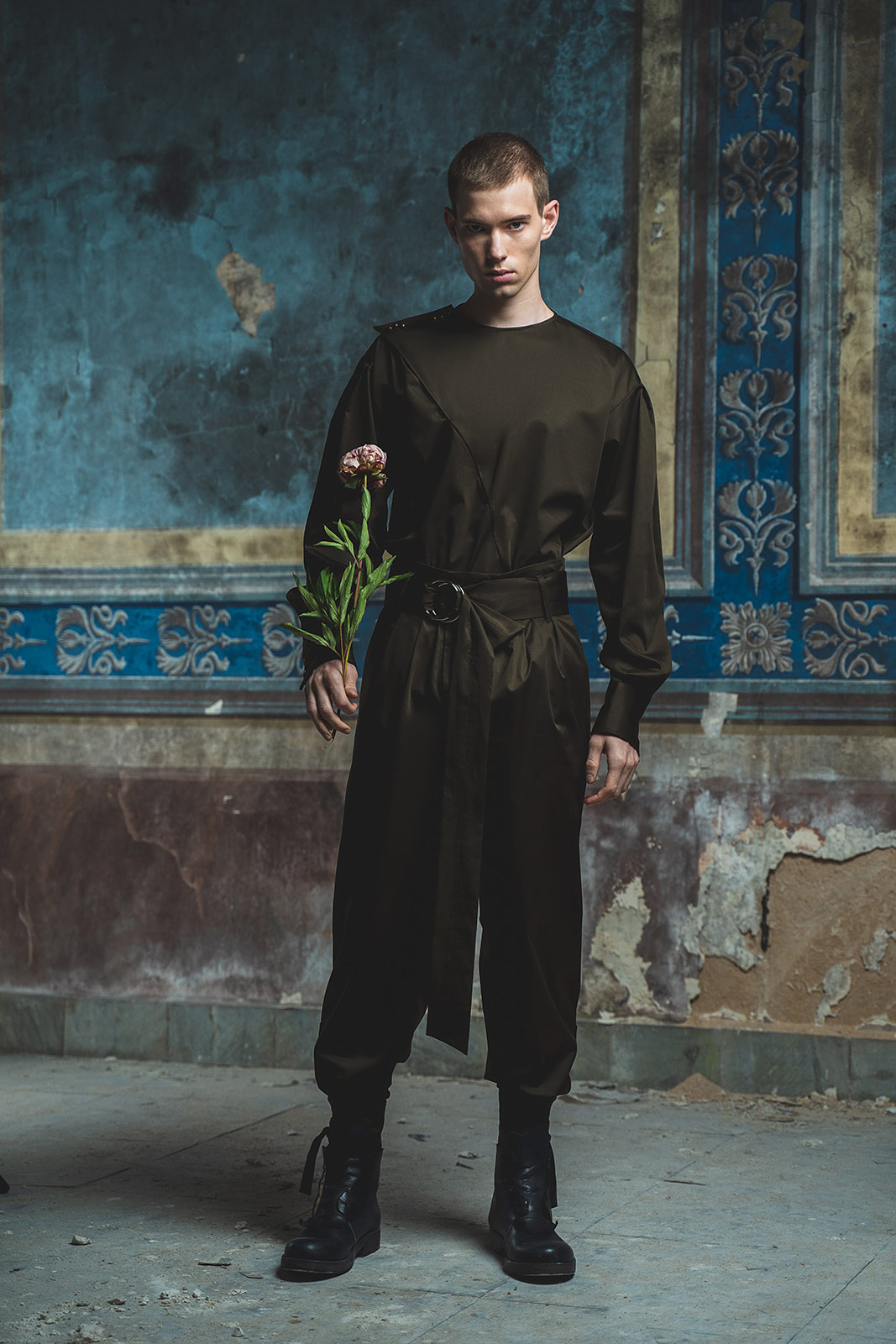 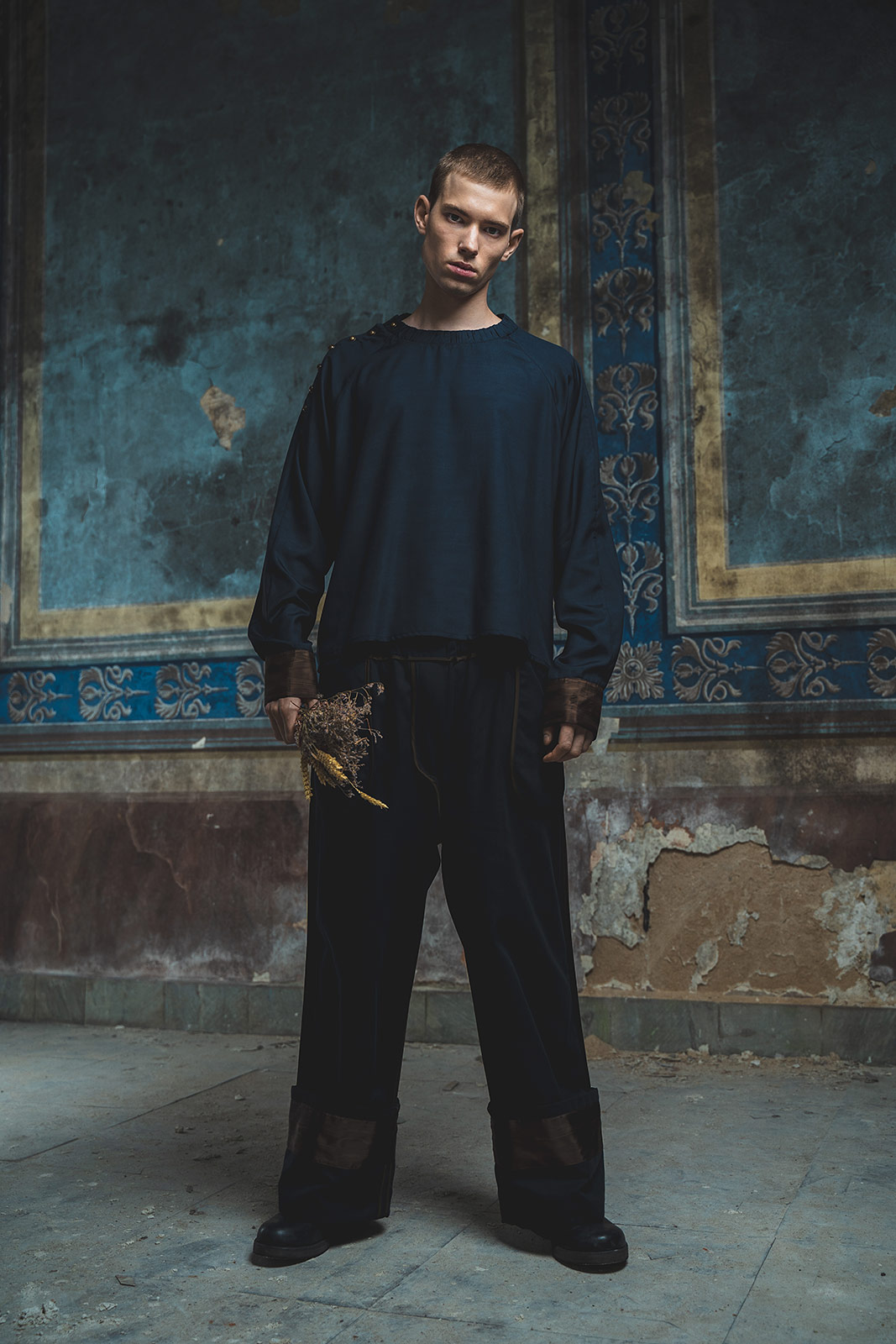