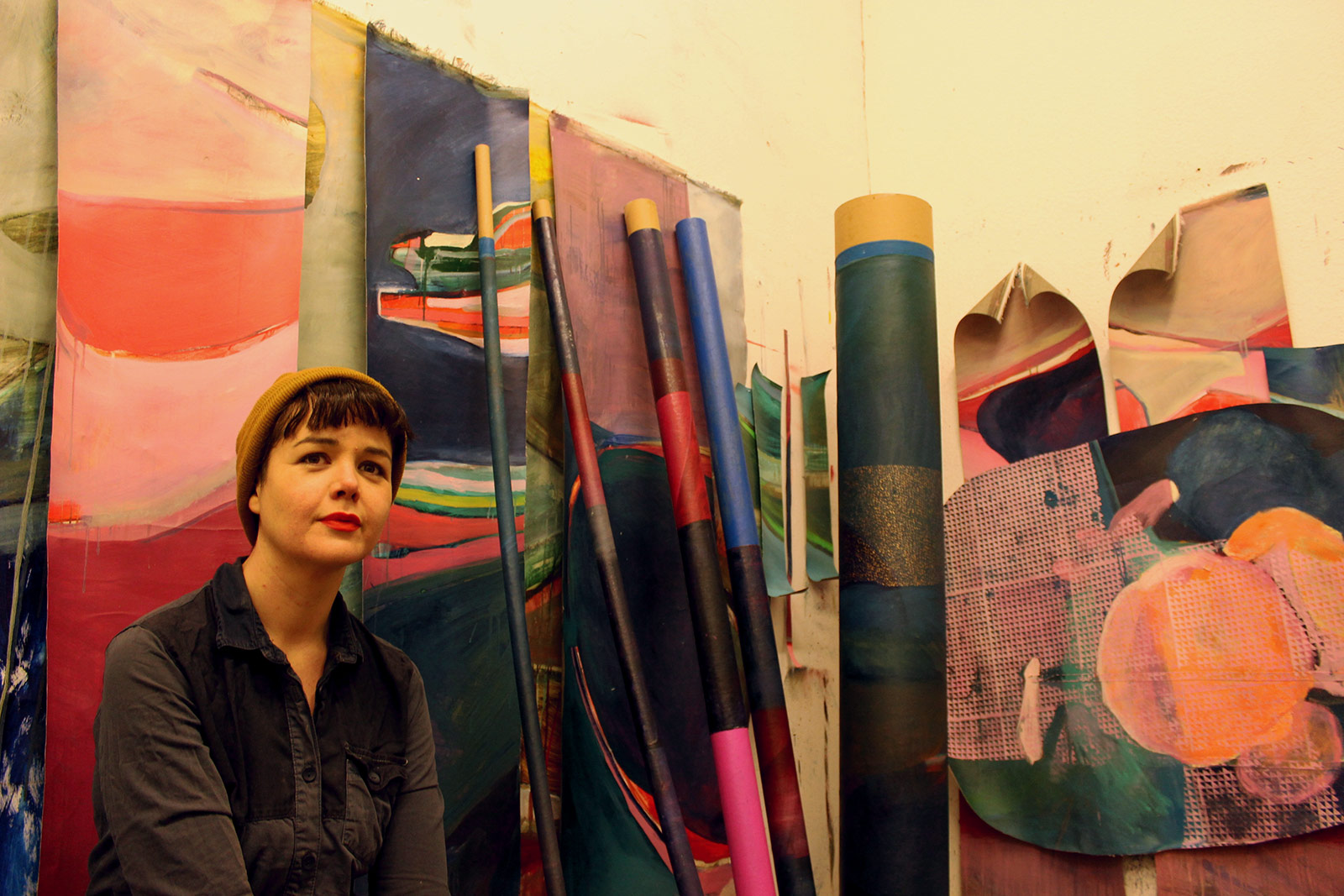 When most people think of a painting they imagine a roughly squarish canvas usually confined within a frame. Scottish painter, Arabella Hope, pushes the age-old medium into new realms by unleashing it from its frame and dissecting and slashing her work before applying them to novel objects to create sculptures. We visited her Berlin studio, surrounded by a forest of her work, to talk about the intersection between painting and the different processes she uses to make art. 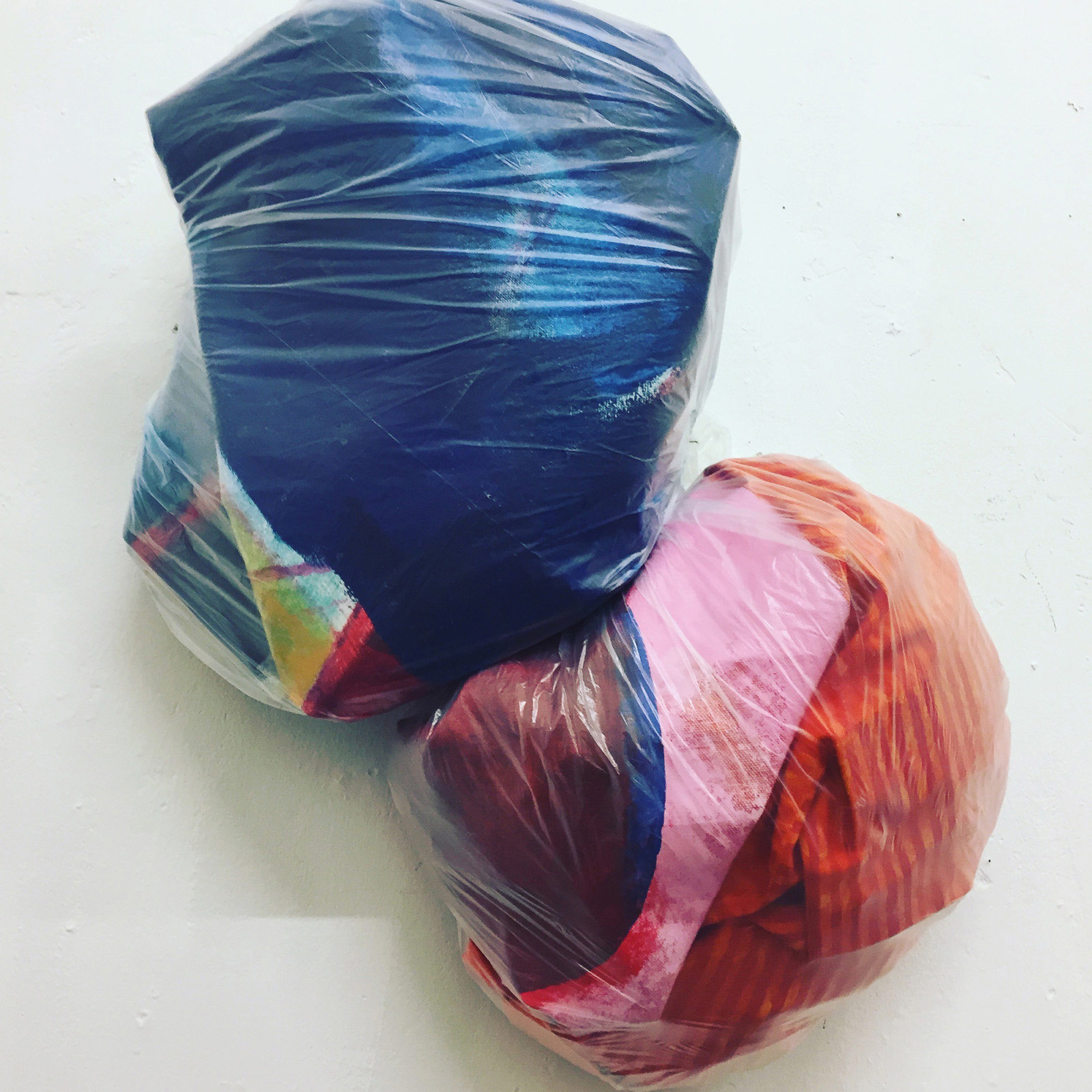 For those who don't know you, how would you introduce yourself?
I moved to Berlin four years ago. I studied painting at Glasgow School of Art although originally I did Product Design – but I only lasted 8 days. I got in to study sculpture but I argued my way into painting, which is funny because now I'm going back into sculpture, so maybe they were right all along. I was lucky enough to get noticed quickly which earned me a spot in a gallery in Brick Lane in London. The exhibition was called BraveArt because they selected the best of the Scottish degree shows and I almost didn't do it because the name was so bad. After BraveArt I was given a solo show at Gimpel Fils in London, and that validation at such an early stage made a huge difference.
How did your work evolve over time?
I used to do figurative painting and then started painting works deliberately devoid of any figures. Someone not being there or absence itself interested me most. That became more interesting to me. I became fascinated by Nathan Oliveira and loose abstract expressionism for a long time, and then it sort of became not as interesting and too easy. It didn't seem like enough of a fight anymore because it was the process that was exciting, discovering something new.
It's funny you talk about processes because you seem to try and put your current work through as much processes as possible; dissection, print, sculpture. Can you remember the first time you cut up or transformed a painting of yours?
I was working on this huge painting in the first year I moved to Berlin, maybe 2m x 2m, but I was never satisfied with it. Even when it was hung in Kreuzberg Pavillon, I felt like there was a weird void in the center of it, something that didn't work compositionally. It had a few owners over the years and eventually found itself back in my studio but this time I felt an urge to create a barrier. All my paintings are vast, abstract landscapes and I wanted to turn this open, multi-faceted space into something more inaccessible, harder to read so I cut it up and wrapped it around cardboard tubes, creating a sort of forest out of this bluish-green landscape. 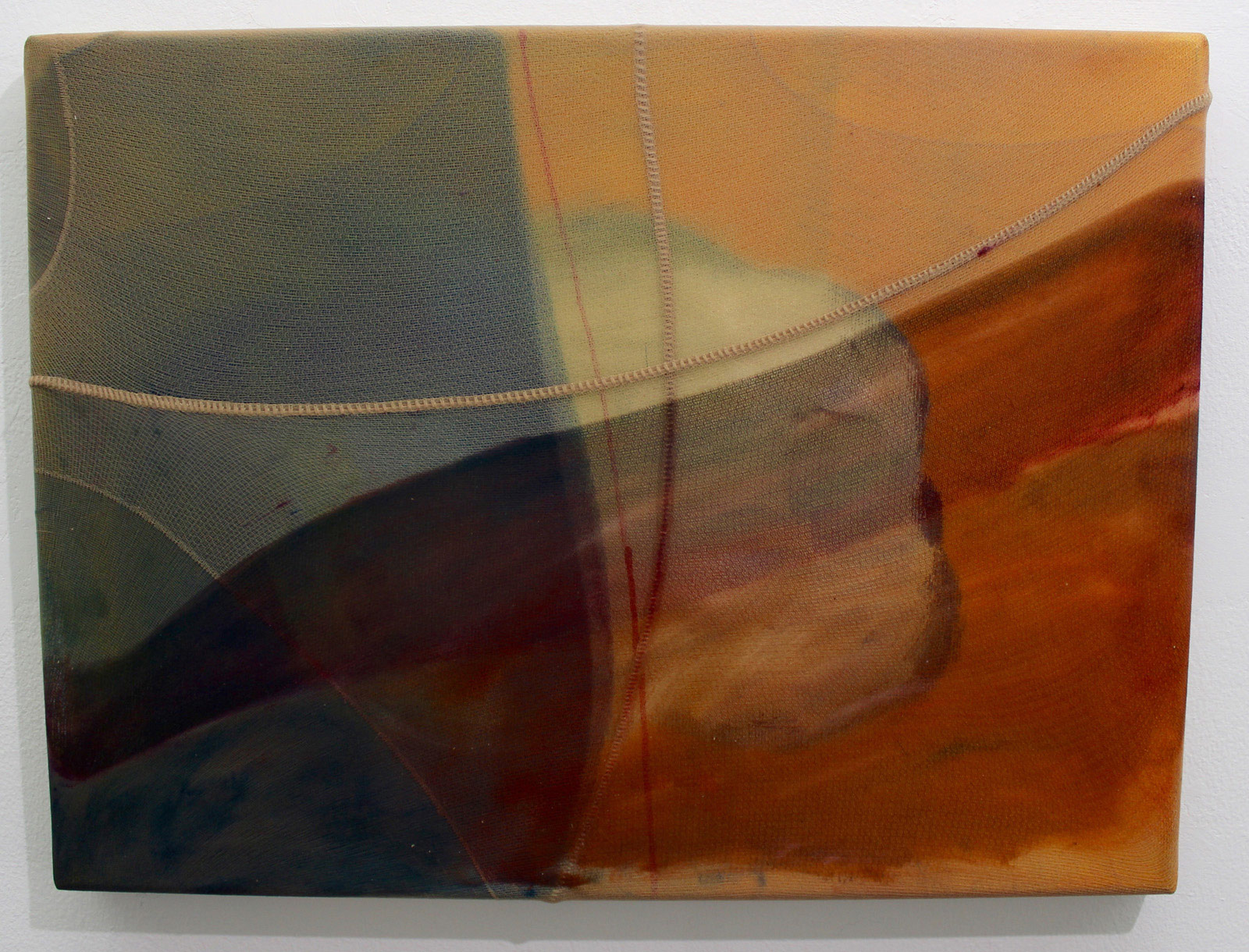 So what started off as re-purposing a painting turned into a new way of making art?
I’m really interested in the idea of painting, the medium, as a metaphor. Timothy Morton has some great points about this; about how everyone has their own idea of ecology, the environment, a landscape or home. Especially as a migrant – I'm a migrant and so are you – you walk around with this idea of home as a lovely idea and a landscape in your brain. It's a massively romanticised limbo, caught between two states of being. I have all these lovely rolling hills in my brain, I grew up in bloody cities but I still think of Scotland as mountainous and gorgeous countryside. I find it really interesting to use the process of painting as a metaphor for this connection but complicating it with the sculptural element.
When you transform your paintings, is your aim to turn something beautiful into something functional and ugly? Are you desecrating art?
No, it's not about desecration at all for me. Somebody asked me the other day if I ever bothered to finish any of the paintings because I knew they were going to be cut up, which I thought was quite interesting and mildly insulting. The reality is that every part of the work is a stage in the process and every stage has a massive significance. However, the finished result needs to stand up on its own, there has to be a sense of completion.
Can you talk about your last exhibition?
It's called Where you lay your head and it opened at Keith Gallery in Neukölln. I find titles really difficult. I used to call things Untitled or Blue 1, which always felt like a cop out because it felt like I was ignoring the importance of the titles. It's like writing a statement on the wall, it's self-curation. I produced it during my residency in Oxford this autumn and is part of a long-running series using mostly Ikea bed slats. There are twenty configurations of slats on the wall with one enormous landscape painting cut up and wrapped around them. Then I took some everyday materials as finishing touches. On another wall I made a piece titled What you carry with you, which are normal plastic bags, each filled with a landscape painting, pinned to the wall. Some of the plastic is painted or printed on. We've all seen so many images of people fleeing to safety with everything they own inside a small bag. It's about the idea of where you lay your head, where home is at the present time but also this idea of a promised land, the nostalgic environment you sprang from. I like the idea of taking these delicate objects, these oil paintings on linen that are very time-consuming to produce, and wrapping them in everyday, industrial objects. I find that thrilling because I went to an established art school and it's making painting more exciting for me. The idea of breaking down painting with these objects that are accessible to everyone. 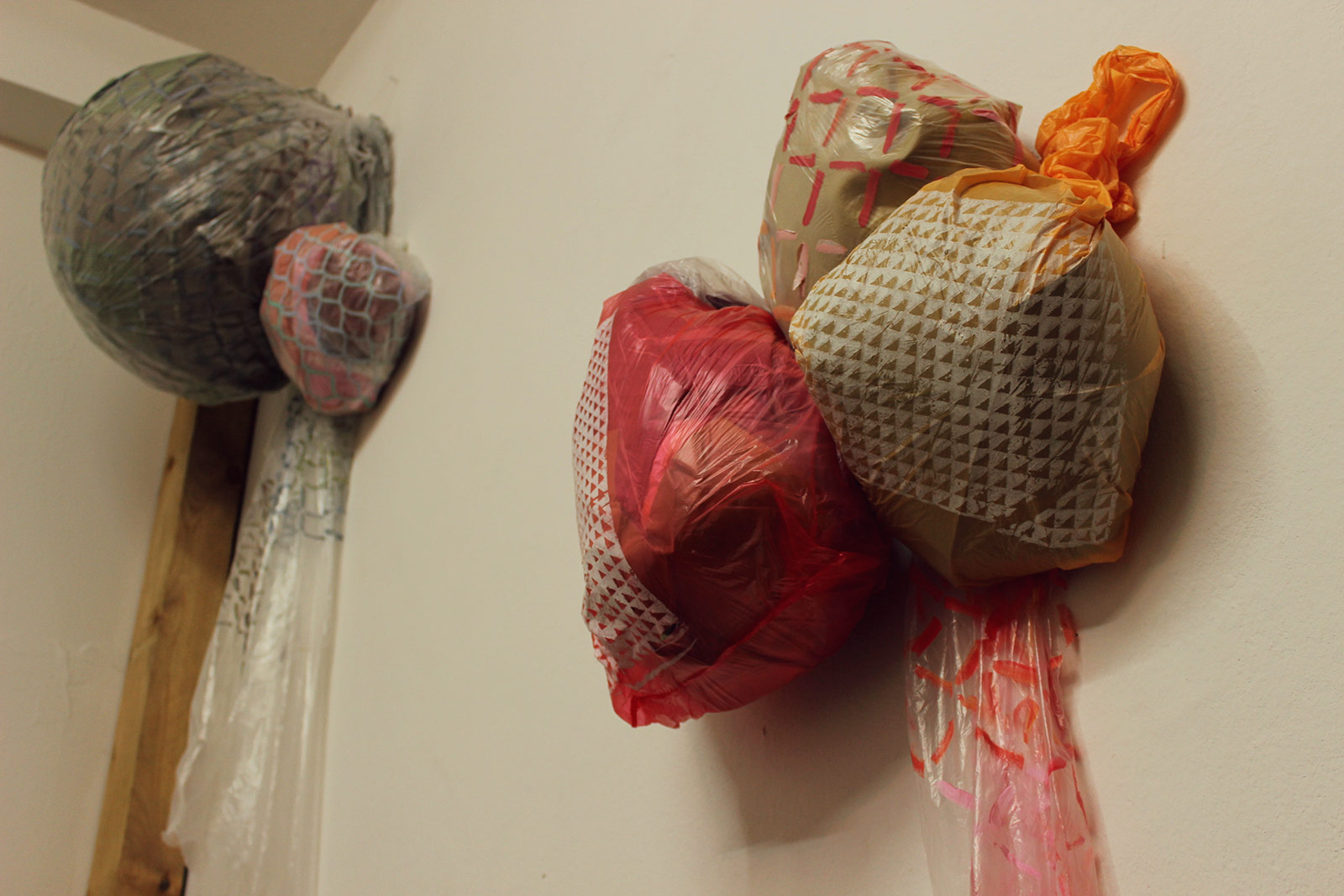 Why do you think Berlin is a good environment for an artist?
Obviously everything is cheaper here; you can have a high quality of life on a low income. Also, there is a lot of industrial space that has been claimed for creative purposes: studios, exhibitions and residency spaces. The most important thing is a sense of community. I feel like I'm part of a strong network of like-minded artists who push each other. The really sad thing is, back home, I wouldn't have that sense of community because I've been away from art school for ten years and most of the artists I knew have stopped producing work. They have to pay rent and keep a job and it's just extremely difficult to continue producing art under those conditions.
Do you think the removal of the need for your art to make money allows you more freedom?
I definitely have a massive amount of freedom to make what I want to make and there are a lots of amazing, small exhibitions constantly. Defensively, I would say it's great; I don't ever worry if my work is commercially viable and I'm free to experiment as much as possible. It's an incredible gift to make art without the constraint of commercial pressures but at the same time it sometimes feels like you're almost being unprofessional if you're not reaching a point where you're making money from what you make. I used to sell quite a bit of work in the UK and, even though I wasn't making lots of money, even if it’s just a little bit it adds value to your work. It's more the boost that someone shows an interest in your work. Once a collector of Howard Hodgkin bought one of my paintings – small pieces of validation like that are so amazing. You sort of don't realize how beaten down you've been by 37 no’s and then someone comes along and reaffirms your confidence in your work.
What's next for you?
The artists that really thrill me and intimidate me, at the moment, are all installation artists so that influence is really pushing me into creating immersive environments that people can walk through. I'd definitely like to expand, physically and symbolically, to a point where my work becomes more complicated. It's nice for your work to deliver meaning and for people to come away with something but at the same time I'm far from offering a spoon fed explanation. The thing is I'm not really trained as a sculptor and I'm starting to feel the limits of that. It's massively frustrating but I'd like to finesse how things are weighted, hung and installed and learn more about carpentry. 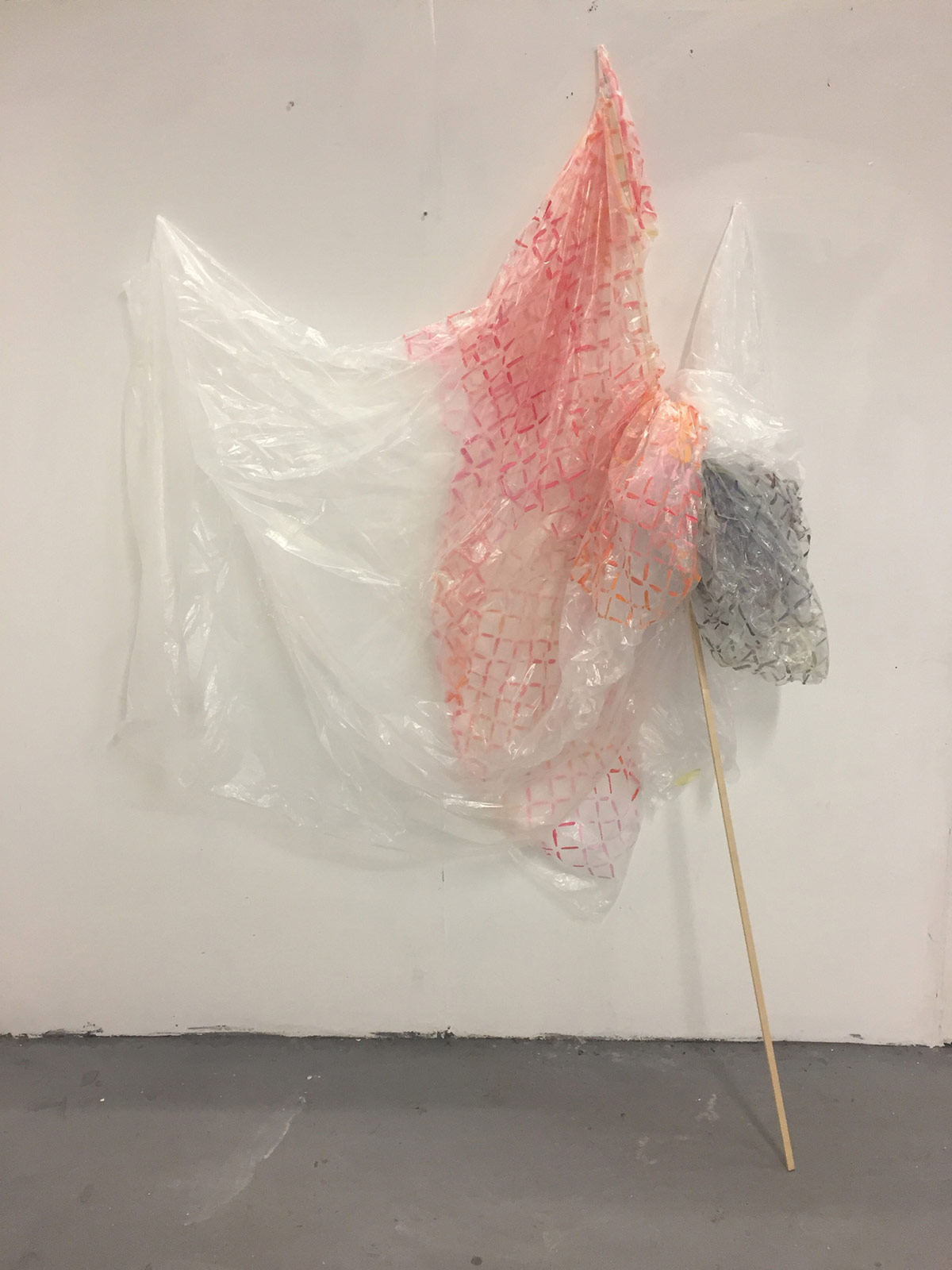 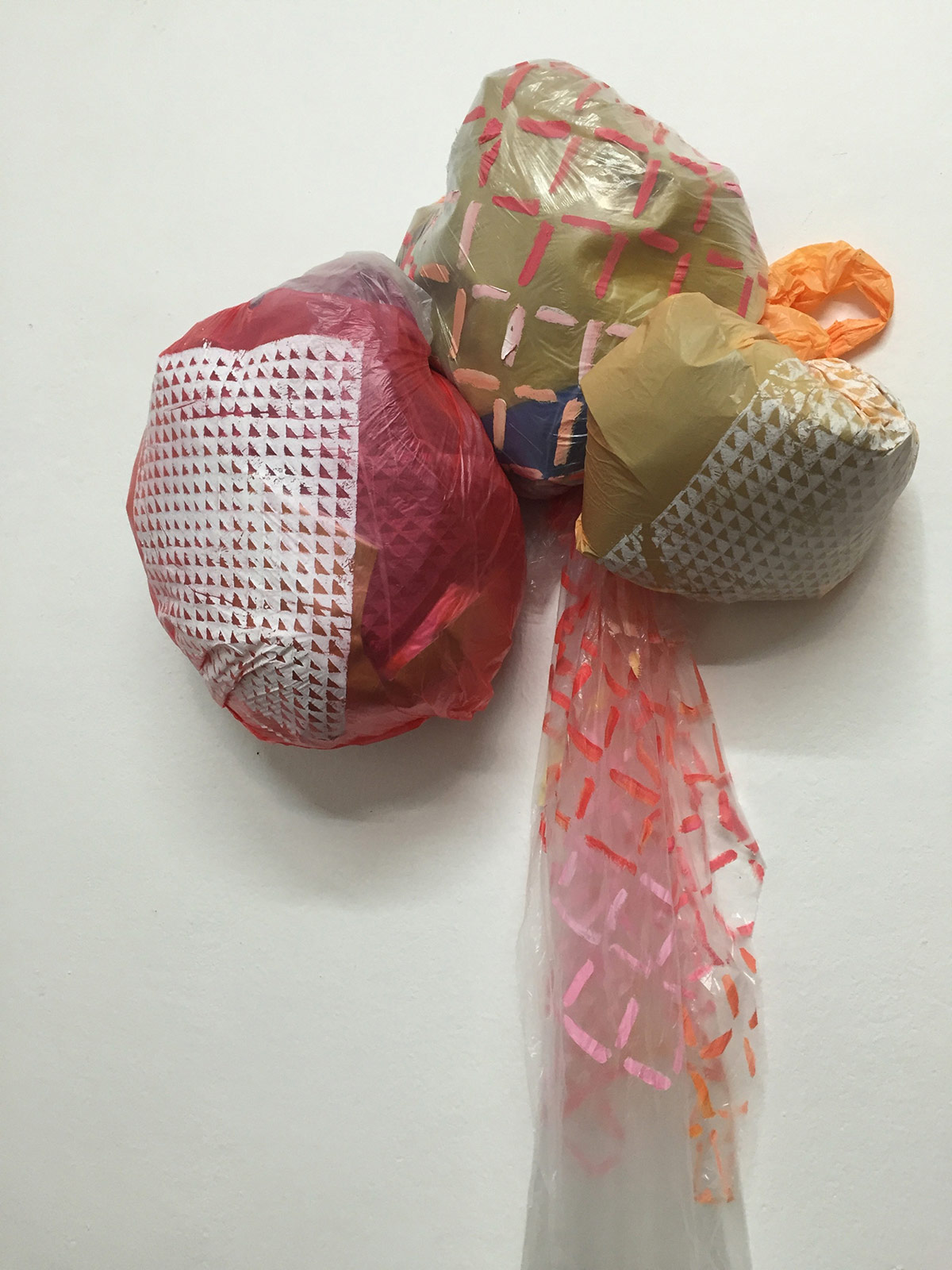