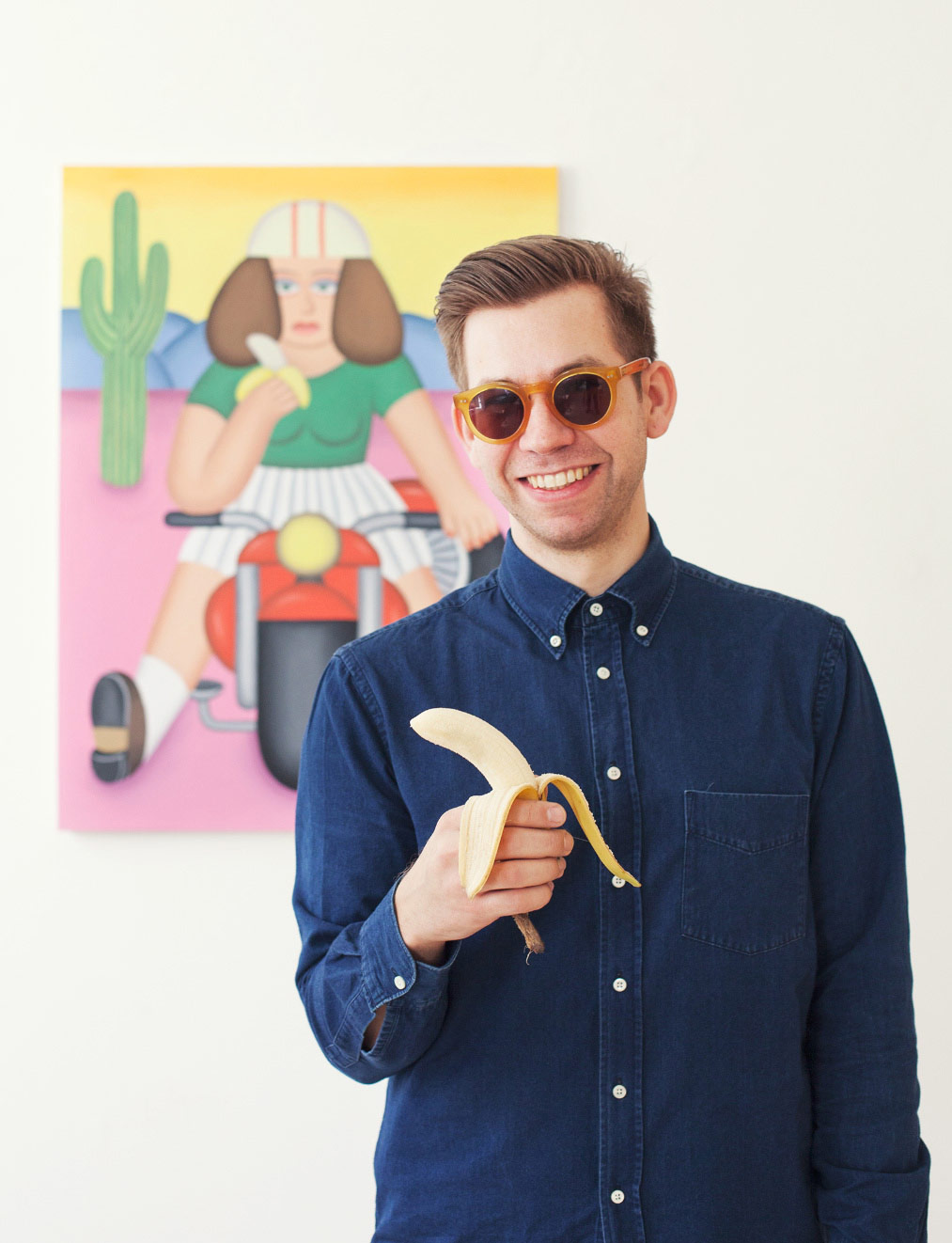 American illustrator and cartoonist Andy Rementer works with paintings, drawings, comics, illustrations, and murals. You will probably recognize his work seen in the New York Times, New York Magazine, Apartamento, Wired and some other media, among his artistic and commercial work. He has exhibited in the US, Europe, and Asia – he has recently exhibited in South Korea, where he presented his first monographic book. During the spring of 2016 his universe of colorful characters was showcased at the Milano-based Antonio Colombo Gallery. The Age of Innocence was a double exhibition together with Fulvia Mendini, and the first time Andy exhibited a body of work composed of oil paintings.
As a matter of fact, this is not Andy’s first time in Italy. For a few years he attended Benetton’s Fabrica in Treviso –one of the places to be if you are a creative young gun–, which meant a milestone in Andy’s vision and creativity. Andy’s work is tidy, and his characters toss elements from the classic American comic school and other artistic movements such as the Renaissance and Postmodernism. In other words, if Crumb, Giotto and Spiegelman had been in Milan this spring, I am sure they would have swung by Andy’s exhibition. 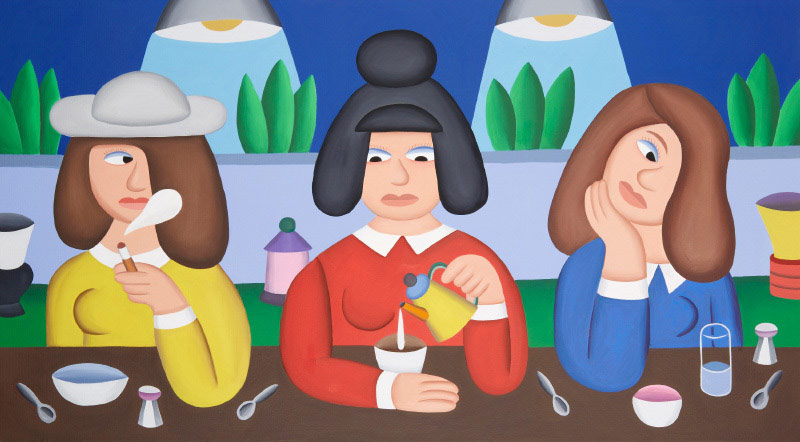 Did you know Fulvia Mendini prior to this exhibition?
While I knew Fulvia’s work, I didn’t know her personally. Her portraits are beautiful, and knew it would be a great fit with my visual world. For the show we worked independently, and met for the first time at the opening in Milan.
I can see some similarities between her work and yours in terms of colorful shapes and characters.
I think our visual worlds connect in many ways. There’s a sense of balance, limited colors, and graphic edge that unites our paintings. It turns out we both studied and worked as graphic designers in the past, so clearly there’s a dialog happening in our artwork.
What did you showcase this time differently to other exhibitions?
I recently started working in oil, and this was my first time showing a body of work in the medium. The gallery was also interested in my preparatory works on paper, which are initial, more gestural ideas, and new for me to exhibit. 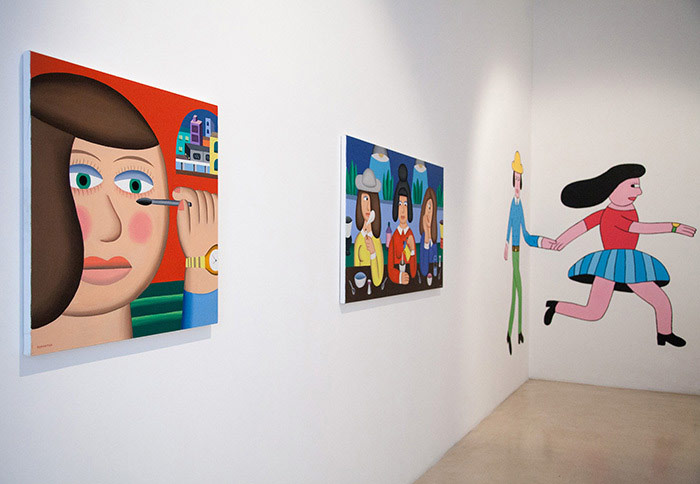 Was Milano you first exhibition in Europe?
I’ve had exhibitions in Europe, but this was my first concentrated show in Italy. Having lived there in the past, and having an Italian wife/studio partner, the country obviously means a lot to me. I also pull a lot of inspiration from Italian art, architecture, and design into my work, so it’s twice as special. Marco Mucig created a short video of my time in Milan. He filmed me doing what I love, drawing on the metro and hanging out in classic ‘’locales.’’
Apart from your memories from Fabrica and the overwhelming history of Italian art, what do you find special in this country, what have you learned from that method that you couldn’t probably find anywhere else?
Fabrica left a mark on me, and it was a defining time for my creative path. The approach I learned there was to communicate using pictures in a universal way. This led to me developing an international sensibility towards image making. Perhaps because of this my work doesn’t feel location-specific, and hopefully resonates globally.
Of course simply being in Italy was incredibly inspiring too. I loved having access to some of the best art, design and signage in the world. I also built up a network of international creative connections that naturally affected my career in positive ways.
Do you think your art and illustrations are influenced by the Italian Renaissance or some other Italian artistic movement?
I’ve always loved Giotto. He struck the perfect balance between human emotion and compositional harmony. I love his flattened architectural backgrounds and broad use of color. I like that he wasn’t fixated on getting the perspective right and concentrated instead on telling stories and making exciting pictures. There are also a lot of 20th century Italian painters that I’m inspired by too. I really love the work of Franco Gentilini, Salvo, and Pompeo Borra, to name a few.
What do you like and dislike the most about Milan?
I like the business and mix of old and new in Milan. I also love that it’s international, and draws folks from lots of different creative spheres. It’s a very unique city for Italy, with its own personality and varied architecture. The old trams and classic bars add so much charm to the place. The only thing I dislike is that Luini, my favorite panzerotti place, is closed on Sunday. 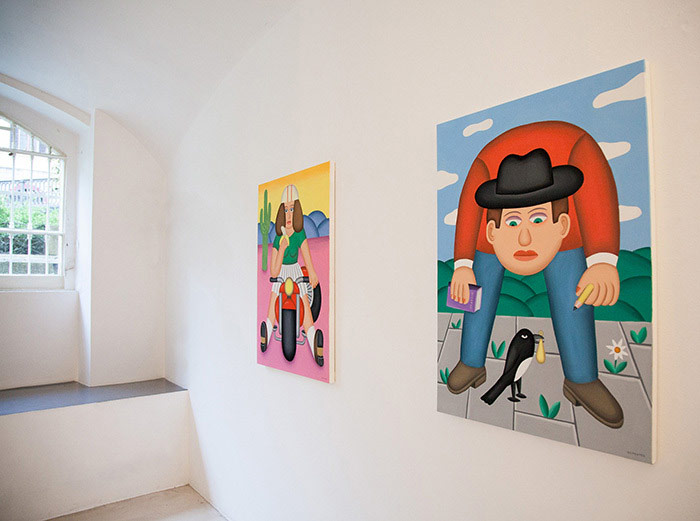 Please, tell me about the Antonio Colombo Gallery as well.
The Antonio Colombo Gallery is a gallery based in the heart of Milan that presents a well-rounded mix of creative people I admire. They showcase a lot of artists that pursue illustration and comics as well. The space itself is unique too, mainly underground with this lovely white vaulted ceiling.
Do you have any other places in mind to showcase your work that sound attractive to you?
For me, the important thing is to concentrate on the work and let the rest follow. I love Asia, and hope to return to showcase some new work there soon. I really connect with Europe as well, and look forward to continuing with some collaborations there too. I’ve had a lot of fun going larger with mural work, and would love to see that grow as well.
Apart from your artistic showcase I think you have been involved in some commercial commissioned work lately.
I recently made a campaign for Asics Europe that focused on connecting with your city. This was well received and I got loads of photos from fans around the world who have seen it. It was on the streets of Milan, London, Berlin, Paris and Amsterdam. 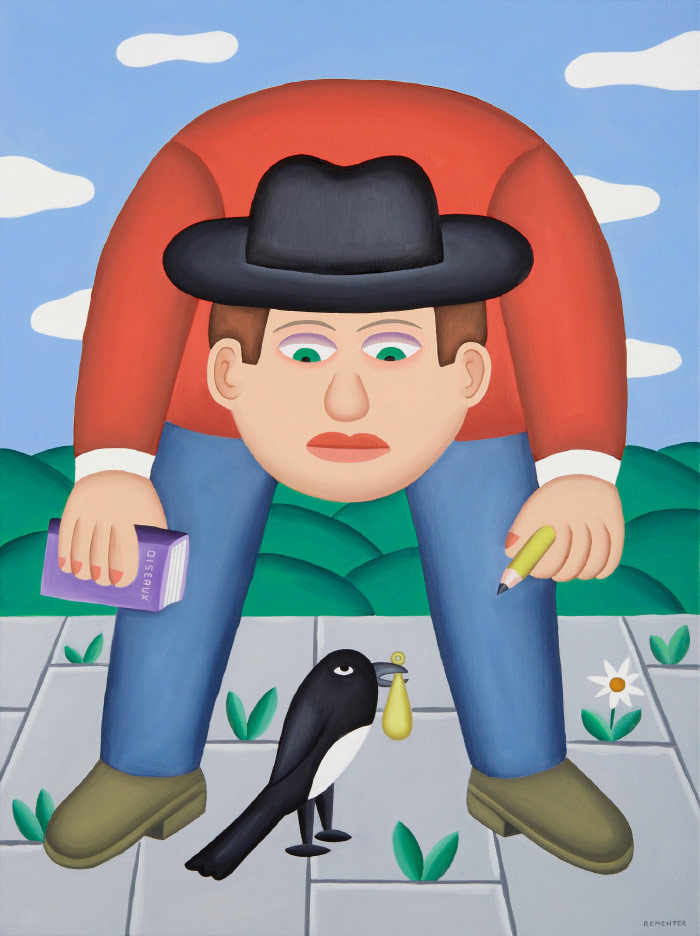 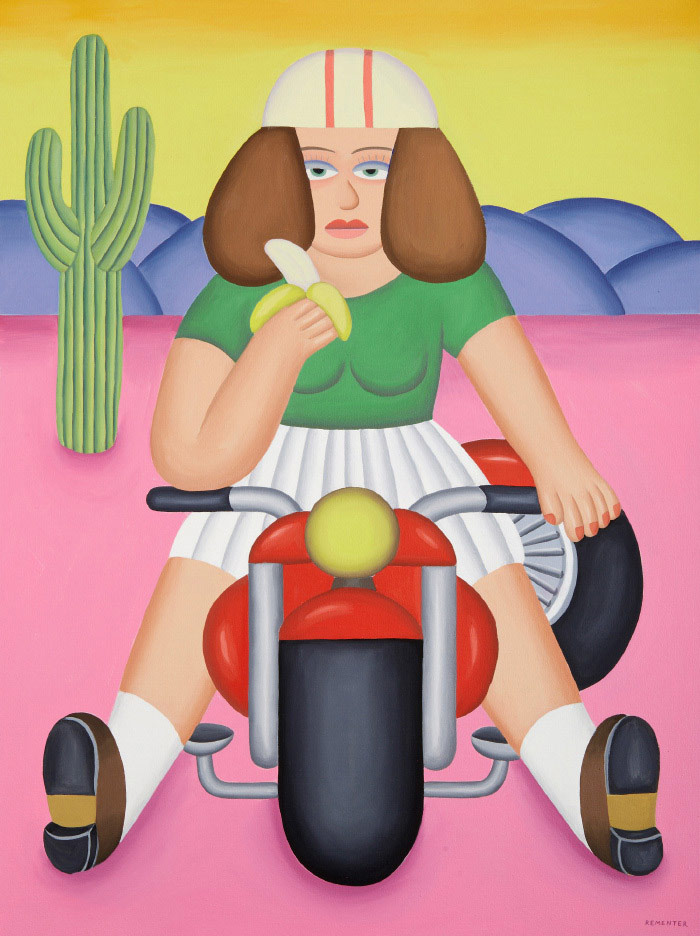 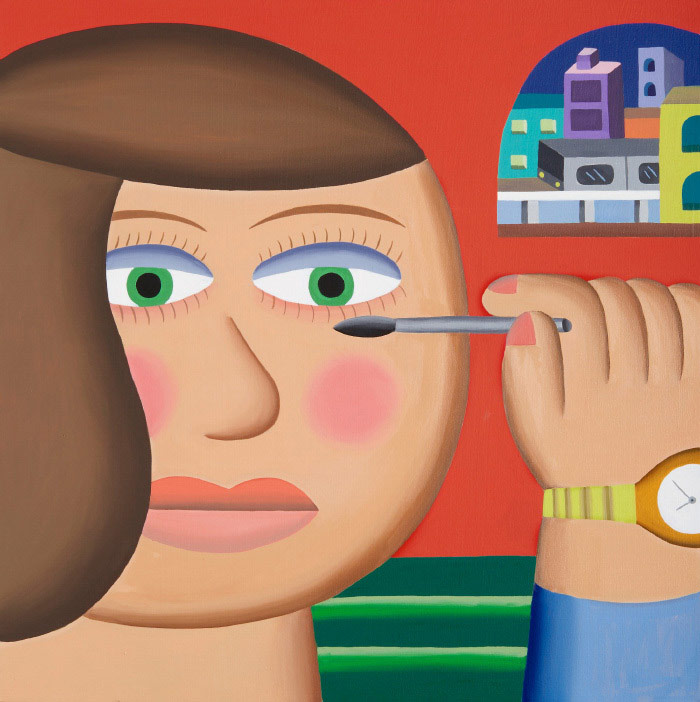 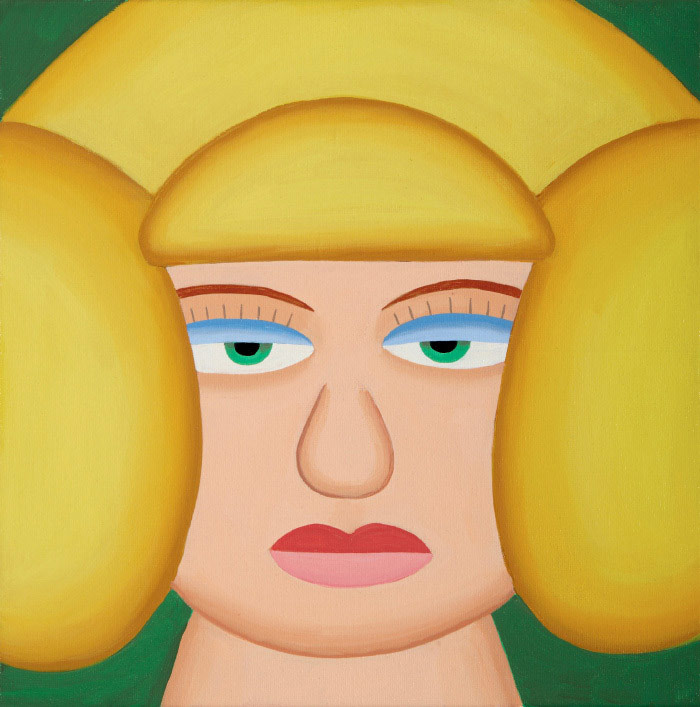 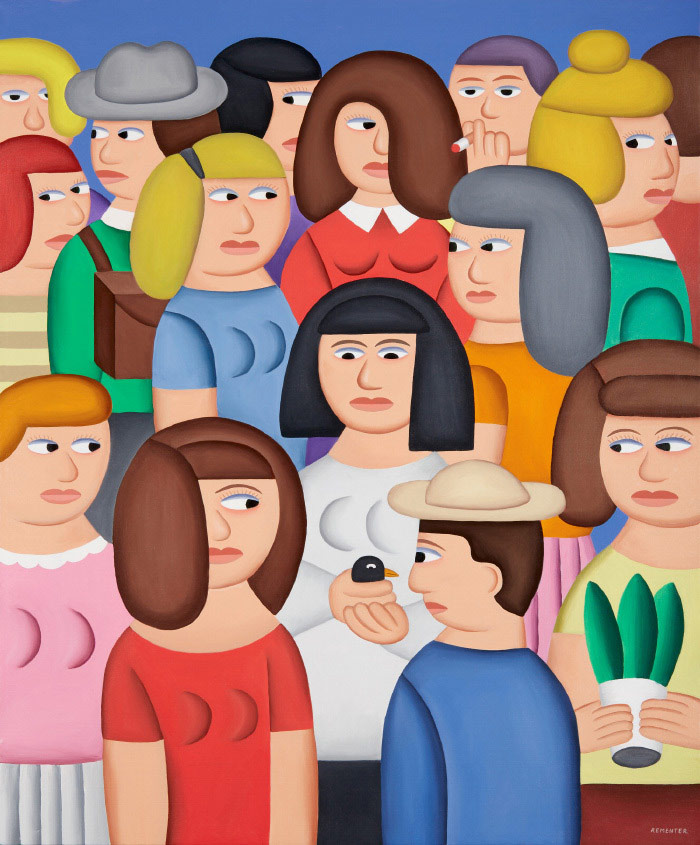 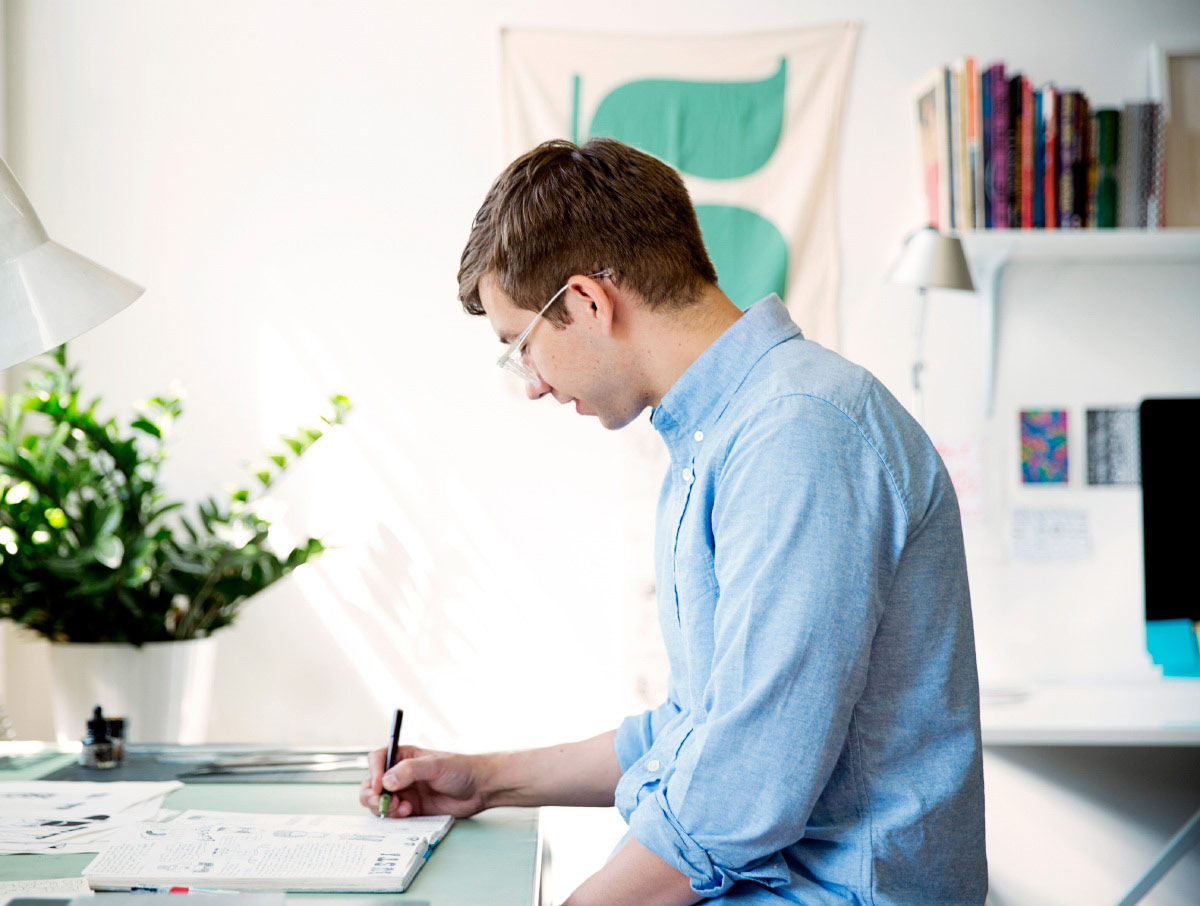