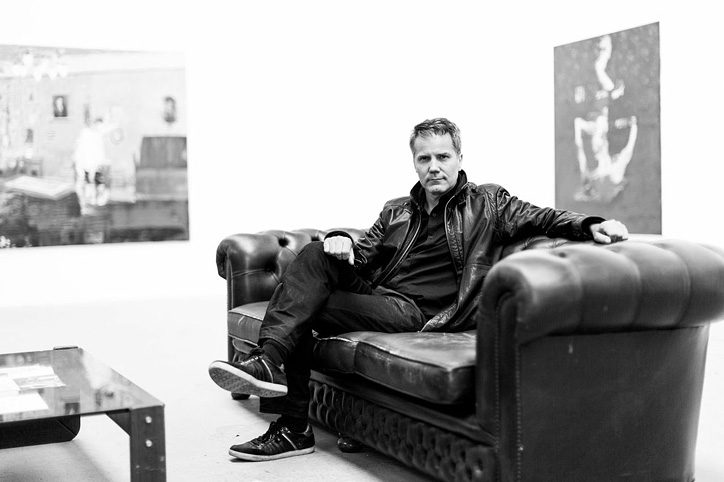 Those who remember with nostalgia the on-screen look of a paused VHS tape will have an instant flash back from observing the work of Zurich based artist Andy Denzler. Making the human figure the centre of his work, he uses his own photography and film as a sketchbook for his paintings. This makes the whole process even more personal, as most of the characters are his own friends. Film motion and distorted moments are constant features of his wet-on-wet paintings and sculptures, creating an environment that makes his paintings alive, very spontaneous and instantly recognizable. From November the 23rd, he will be presenting his next exhibition, "Distorted Moments", at Ludwig Museum Koblenz.

What lead you to become a fine artist and to develop your style?

When I was sixteen I was photographing original works of Andy Warhol, Basquiat, Schnabel, Clemente, Picasso and Monet for a famous Swiss art dealer in the 80’s. These reproductions were used for art books or print material. In 1981 few had heard of Basquiat. I could not understand what he was doing, it irritated and fascinated me at the same time. At the age of nineteen, I moved to South Africa, during apartheid, for one year. One year later, as a photographer, I had the opportunity of working with all different kinds of audio-visual equipment, like video and photo material. I was interested in experimenting with different techniques. Later I lived in L.A., NY and London. All these experiences made strong impressions on my own personal life and work as an artist. My visual vocabulary has evolved over twenty years, and still is. About ten years ago, when I moved from abstract to figurative works, I began applying my painting technique to portraiture. At first I did a series of black and white sepia portraits, reinterpreting my own photography and film stills. Recently I’ve started to isolate the movement in my paintings. The overall effect is less filmic, but more dramatic. There’s more tension.

You have been living in London and LA while studying, but now you are based in Zurich, where you were born. As an artist, how is living and working in Zurich?

Zurich is a multicultural and international hotspot for contemporary art. The downside is the high living cost, but in general, living and working in Zurich can be very peaceful for an artist.

Can you give us a little insight into your creative process? Do you plan everything in advance or is it more intuitive?

Mostly I paint conceptually for a certain project or show. It can be a political or critical social theme, like the American Painting Exhibition in New York 2005 or the Insomnia Exhibition in Lisbon 2007, or an idea from everyday life. I start with the topic and do some research or use my own film, photography or Polaroid. This raw material looks already like a painting. The effect resembles the “snow” of an old black-and-white 1960s’ TV. It’s as if I’ve pressed the fast-forward on a video machine, then hit the pause button, so reality comes to a stand-still. I speed up and slow down the paint. What remains is a distorted moment – classically painted, oil on canvas – which, upon closer inspection is very abstract, but from distance looks real. I want my paintings to look like dusty old photographs.

Your painting is mostly figurative, who are the characters of your paintings? And the interior spaces on your paintings, are they real or do you recreate them from your mind?

Mostly, they are people I know or friends. The backgrounds are sometimes real, and sometimes invented.

You take your own photos to compose your paintings, but are you influenced by the work of other photographers?

Photography and film are a huge influence in my work. I’m interested in a new media feel or cinematic touch in my paintings.

I am interested in knowing your opinion about the image-saturated culture we are immersed in at the moment. What role do you think painting plays in it?

I would call it “picture storm”, which can be overwhelming. It is important to be able to filter. Painting will never die compared to other art media forms: the first paintings were also painted on rocks with relief to animate the figures with the torch, and the last paintings will be painted in caves as well.

What are your main influences in painting and which are the artists you like the most?

The painters I respect the most are Freud, Velázquez and Rembrandt.

What resources across any media do you turn to regularly for creative inspiration?

Using my own pictures’ source (library) is one way to achieve very personal portraits. Working with found images is a possibility of getting involved with world history or mass media images that become hyper reality, or even more important than reality itself – like Baudrillard argued. My intention is to work with time. Because the paint is drying fast on the canvas, and because I am working wet-on-wet, I have to paint against time as well. The appearance of two different layers on the painting shows, in a way, the past and the present, or fiction and reality.

Your style is quite unique and makes your work instantly recognizable, those distorting lines that give a feeling of motion and make the painting very strong visually. What are the reasons behind using that technique?

There would be no life without motion, everything begins with movement…

You also make sculptures that actually look like a 3D extension of your paintings. Is the sculpture a particular way of expressing yourself that you cannot reach by painting? Are there any other media you would like to explore that you haven’t experienced yet?

A video called Motion & Distortion has been produced in the similar visual language of my paintings, drawings and sculptures. My focus stays with painting, which is the most exciting media for me.

Soon you will be presenting your work in a new exhibition called “Distorted Moments” in the Ludwig Museum Koblenz. What can we expect to see in this new exhibition? What has inspired this body of work?

It is a combination of more than one series. I will show portraits. It is a new body of works about The Forgotten Palace and is based on an old abandoned Villa from a baron who lived in Stresa (Italy). It used to be a summer destination for the old European nobles. For the last fifty years nobody has lived in this palace and I had the chance to go in and take some pictures for my paintings.

What kind of experience do you want your painting to create to the viewer?

I would like my paintings to look like they have been excavated or that they are fifty years old.

What would be your dream project?

To build my own studio. 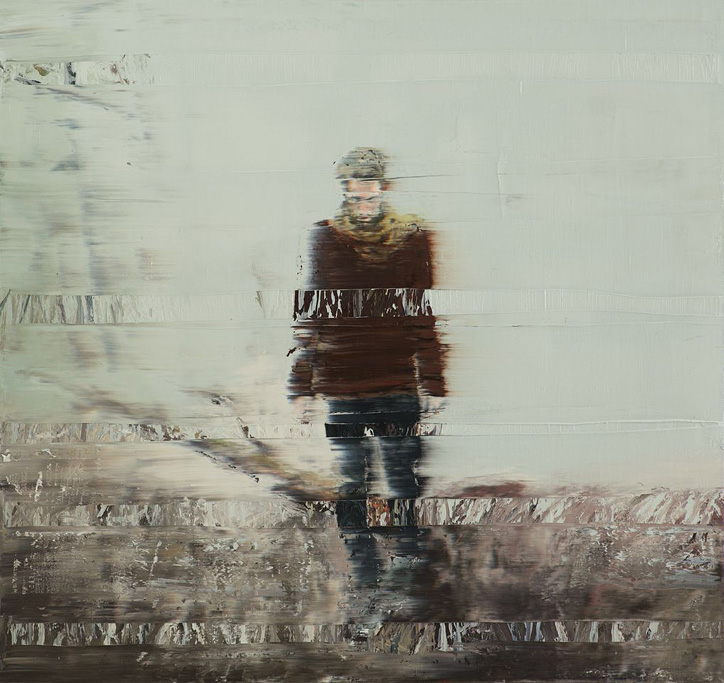 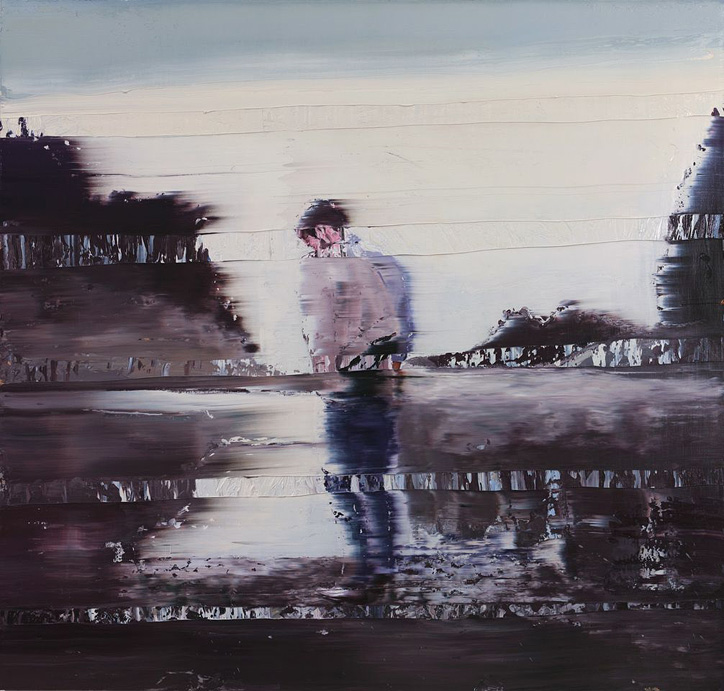 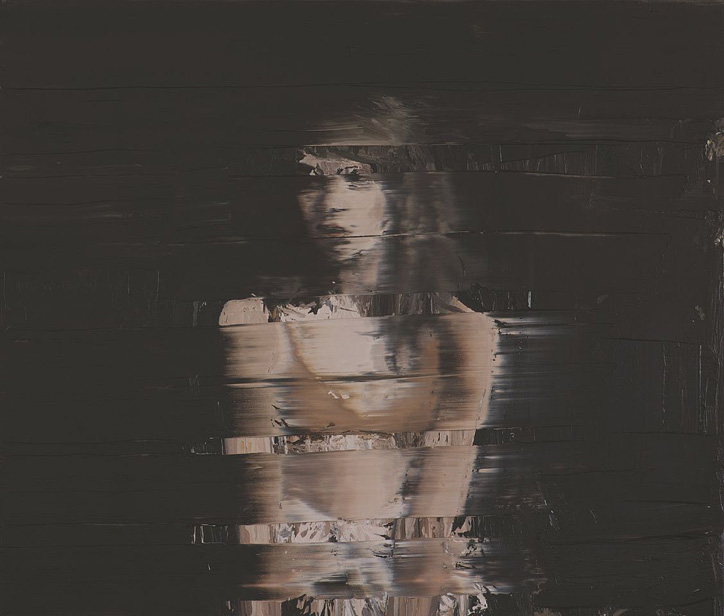 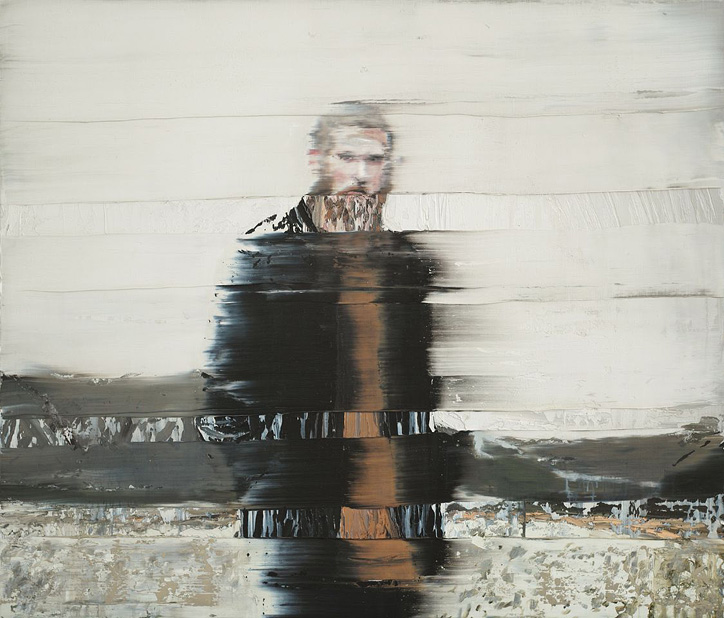 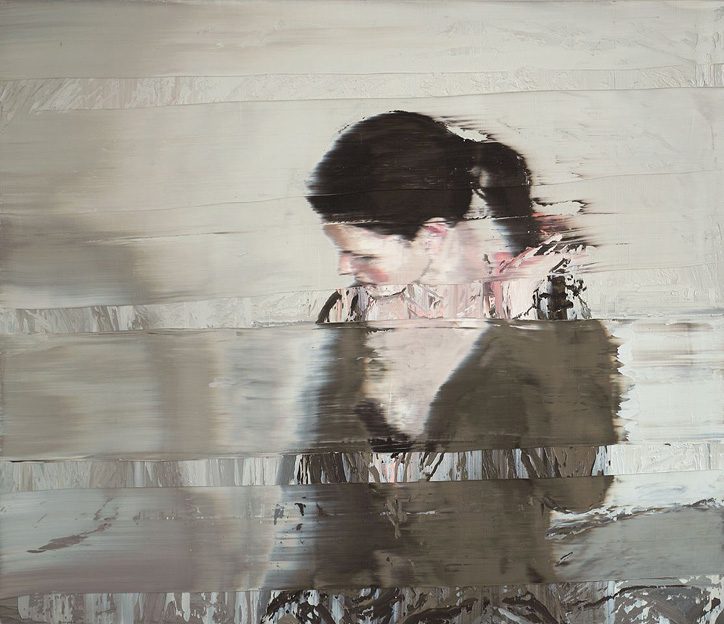 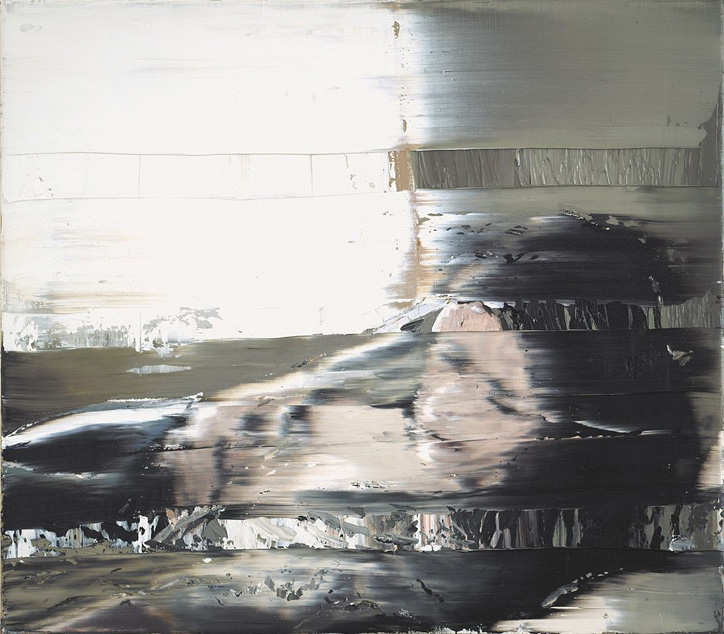 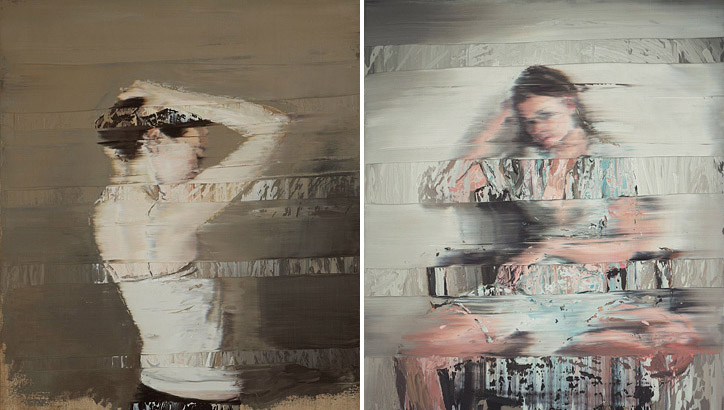 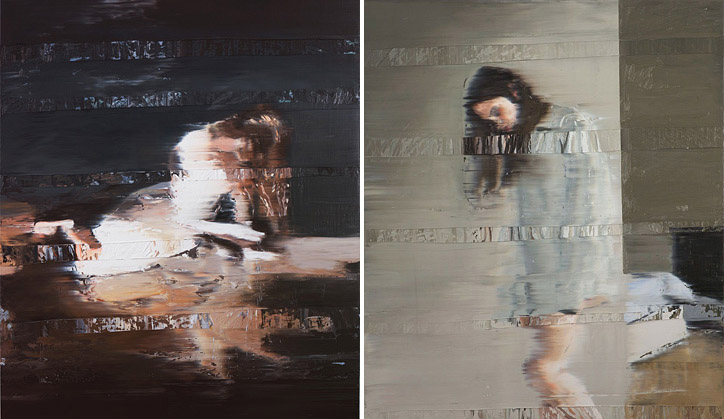 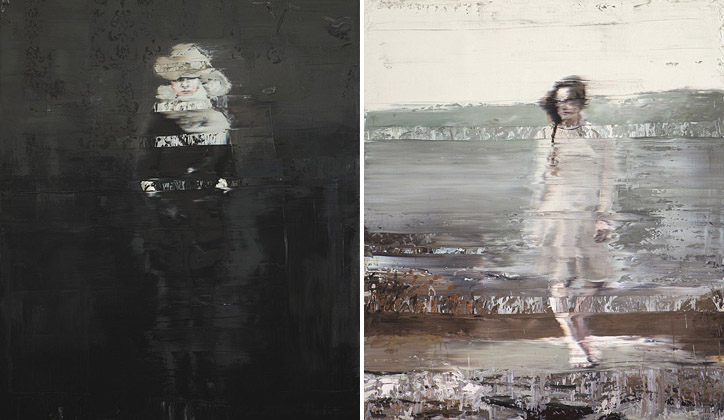 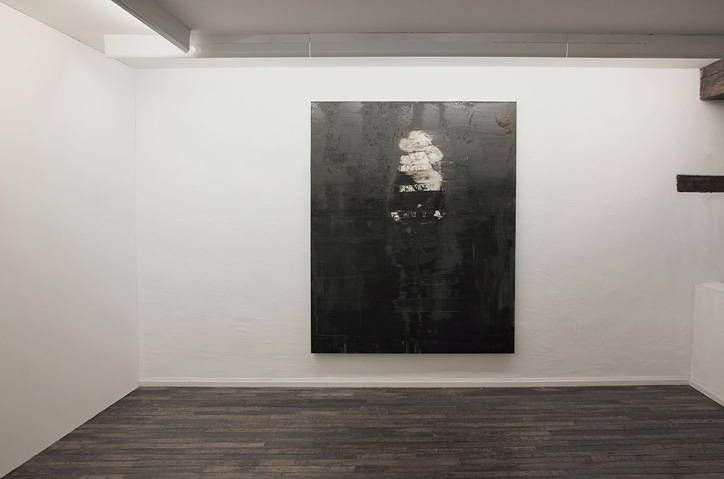 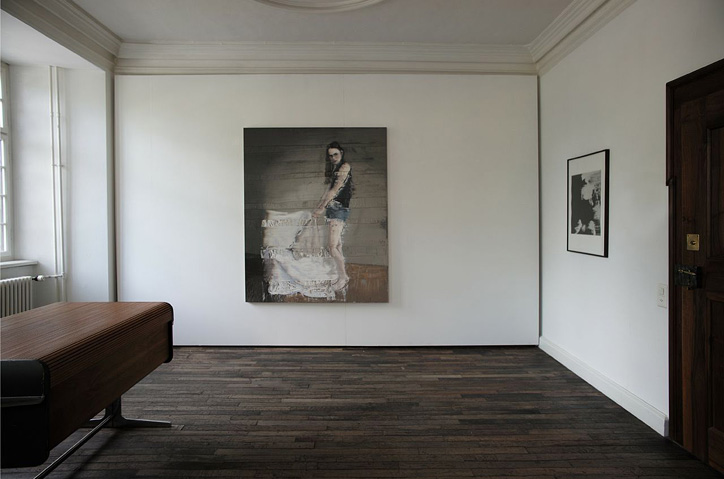 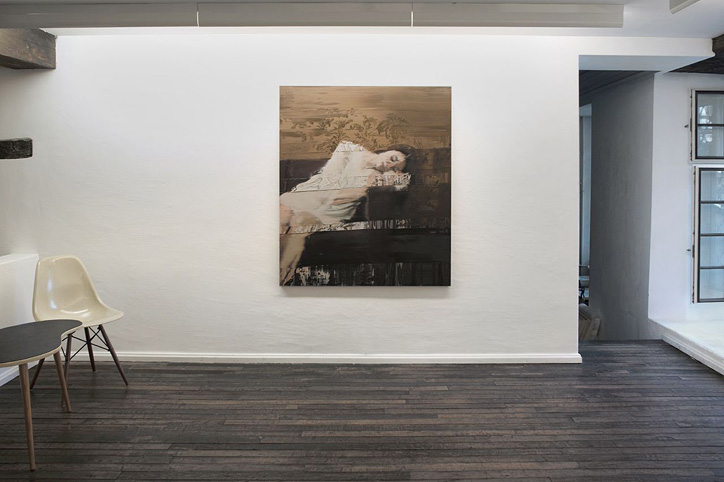