It’s beautiful and it's scary 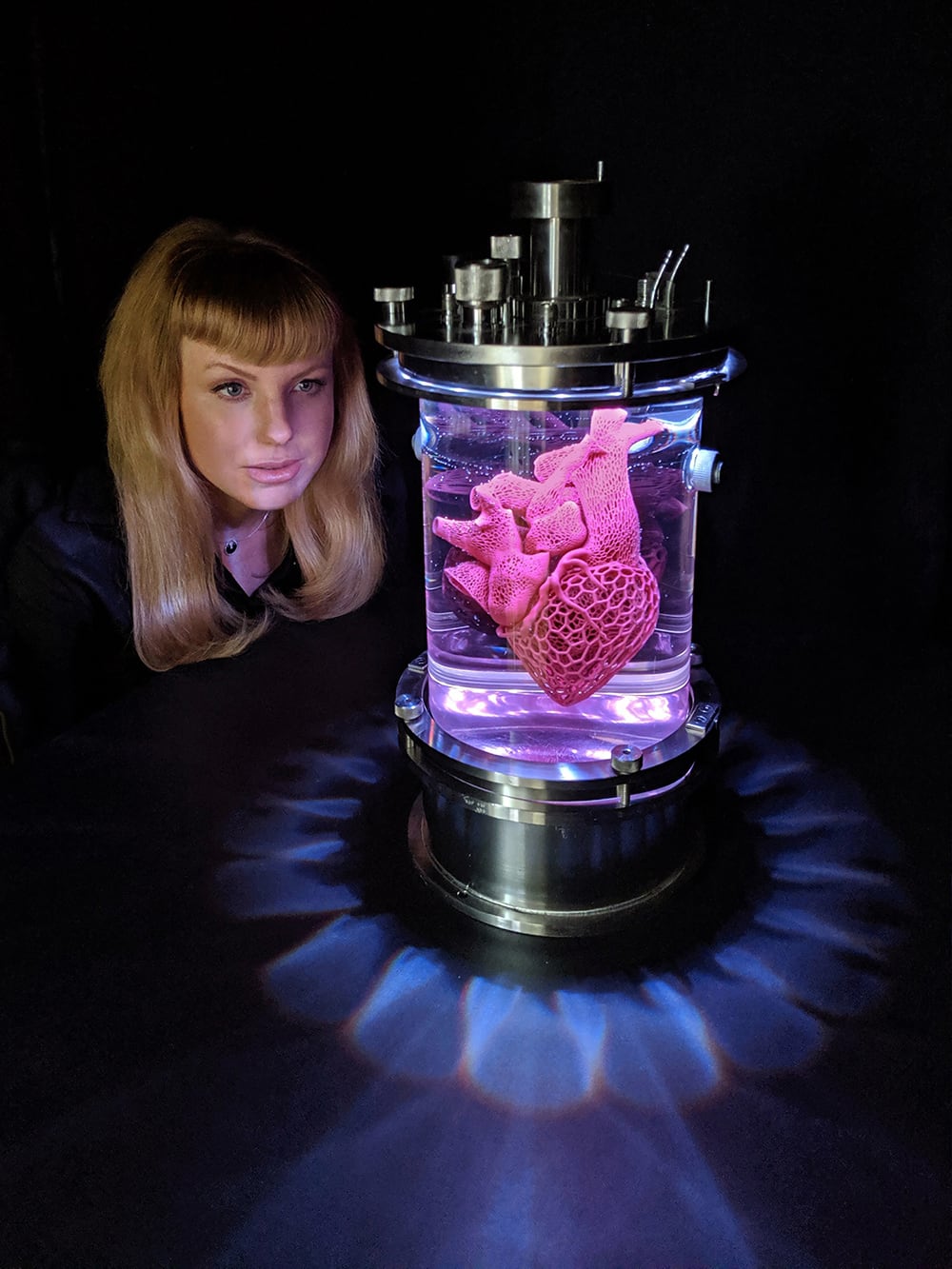 Growing up with a life-threatening medical condition, Aplasia cutis congenita, has fueled Amy Karle's desire to explore medical technologies through her artwork. Karle is dedicated to creating works that challenge the human condition and questions what exactly it means to be human in the first place.
Whilst some artists use the stroke of a brush or make lines with a pencil, Karle had other plans she is a bioartist. Using living materials such as human stem cells, she creates art that grows and has it’s very own heartbeat. Karle creates enticing works that go beyond its futuristic appearance, they are projects that one day may be used as blueprints for possible solutions in the medical realm. Technology can be seen as a negative thing, some believing it will lead us down a rabbit hole where humans lose control, but Karle chooses to see the good in technology. She uses the combination of art and science to create a healthy relationship between humanity and technology, one that heals and restores. Growing up in a lab with her mother as well as visiting shrines and churches with her grandmother has greatly influenced the duality of her work. She presents her art as both relics and scientific specimens, a combination of something new and futuristic, but also something that is familiar with humanity. 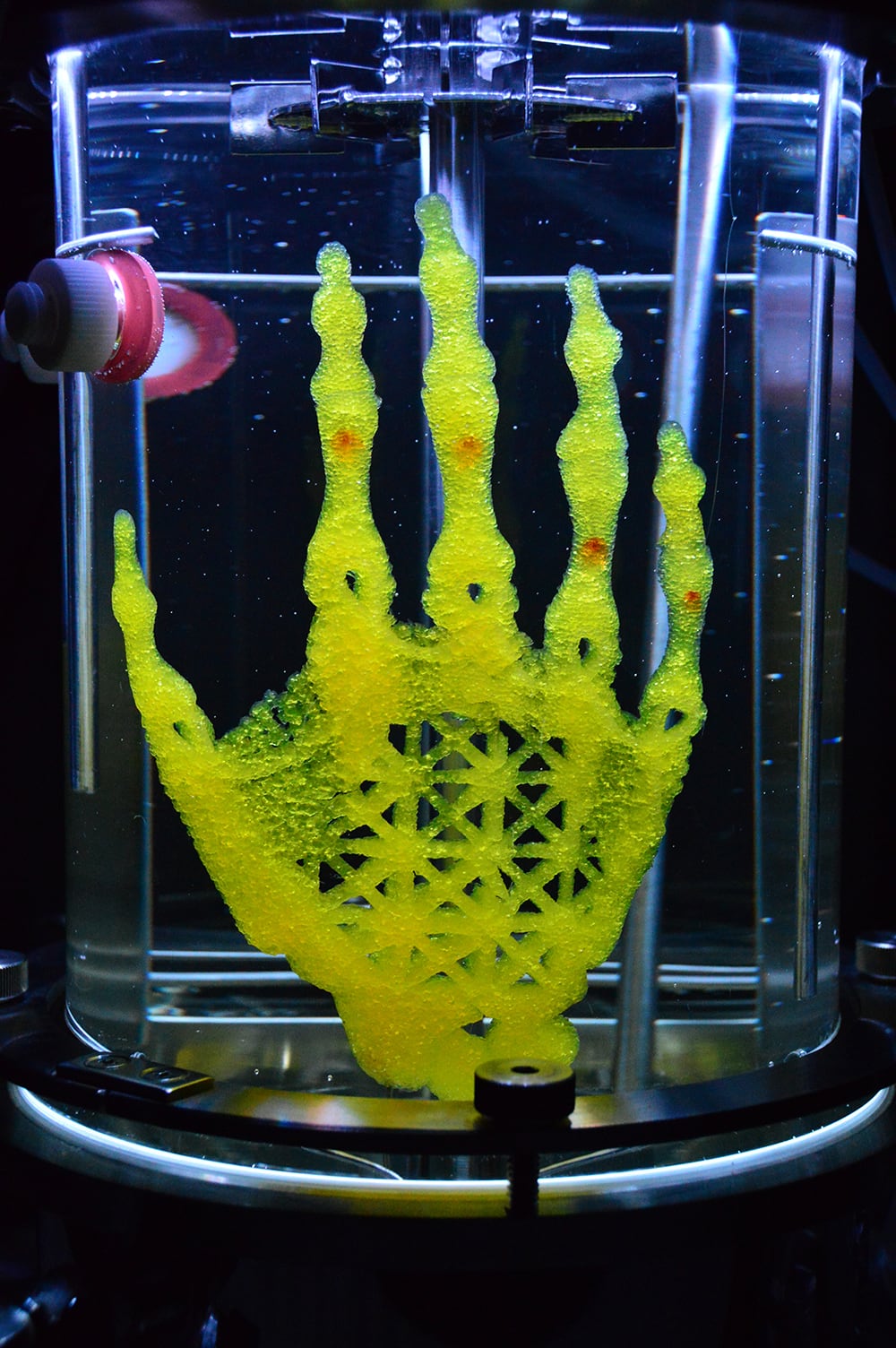 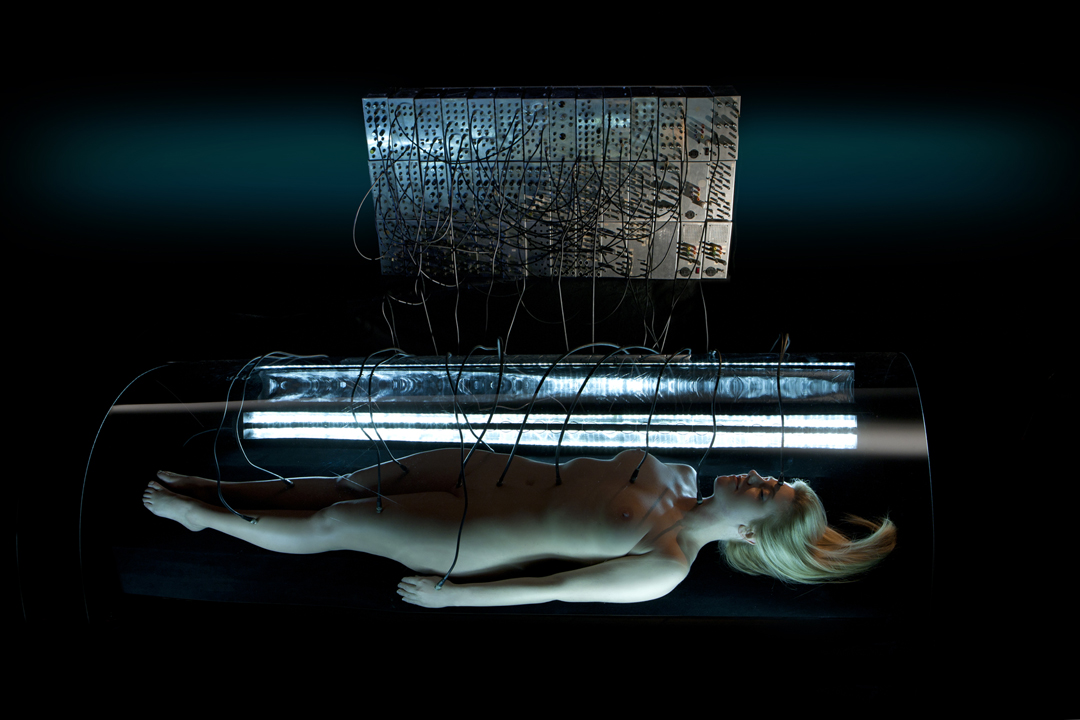 A lot of your work reminded me of Donna Haraway’s Cyborg Manifesto. There are themes of rejecting boundaries and the line between humanity and machine. Do any of these themes parallel the message of your works?
Yes, I'm extremely interested in how and why humans create “machines” (technology), and then how that technology impacts and alters the user, humanity at large, our environment, interactions, and evolution. There is a large range of potentials and possibilities here. We see many examples of advanced technologies leading to our demise and they can also lead to healing and a better future. I'm interested in focusing on how we can use technology to enable and empower us to have healthier, happier lives and have a better quality of existence.
Every artist has a very unique approach to the creative process, I am curious to know what a bioartist’s creative process is like. How long does it take to create a project and what are the steps you take when making art?
My creative process starts with questions I'm asking and a general idea of a project that I'm embarking on. It develops as I go. I don't know the final result as I'm making it. I let the process dictate what the outcome will be. It could take quite some time to create a project especially a bioart project because bioart is time based, we need to allow time for things to grow and develop. The timeline and steps are unique to each project.
As someone who grew up with a life threatening medical condition, did that influence the motivations and purposes of your art at all? Has it influenced your drive to create bioart?
Yes, completely. I was born with Aplasia cutis congenita, a rare malformation where I was missing a large portion of skin on my head and bone in my skull. From a young age this deeply impacted me in many ways that influence the work that I do today. It impacted my understanding of the human condition and limitations because of the body. Often people don't have to face these issues or have to come to terms with this in an internalised way until they are much older if they get sick or if a loved one passes away. But I was born with this and it was an integral part of my understanding of being. At the same time I just wanted to have something that would heal this malformation, it was tough to live with. My mum was a chemist and my father was a pharmacist so they were fantastic at taking care of me, and had the know-how and access to the best medical professionals. I had a number of experimental surgeries until one worked when I was a teenager. This deeply influenced my understanding and embrace of the potential of medical technologies. Both these aspects: 1 the human condition in relation to the body and 2 a hope that science and technology could empower and heal us was deeply ingrained in me from a very young age because of this experience and it continues to influence the work that I do today. I express this through art because I carry this experience with me in everything I do, it is deeply rooted in the emotional experience, questioning, and hope that comes with envisioning the future.
You work in a variety of art from bioart, biofeedback, garments to performances. What is it like to work on such different forms of art and do you have a preferred method?
I question what it means to be human at this time of humans merging with technology. My inquiry and exploration manifests across many different platforms as I explore different tools, technologies and methods… but it does not feel so different to me. It doesn't feel like different forms of art because I use technological tools in the process and almost always use the human body in my work. I believe it's very important to explore different tools across different mediums because it provokes the mind to think in different ways, and produces different aesthetics. It gets me to think in different ways, find different outcomes, and ultimately ask better questions. It seems like my work falls under different categories, but as technology progresses the categories merge more and more. For example, my work in AI and ANN can help to design forms for inside or outside of the body, and be made into garments, bioart sculptures or implant design. Biofeedback devices morph into garments via wearable devices, and thus part of a performance. As the technology progresses the boundaries of “categories” morph into each other more and more. 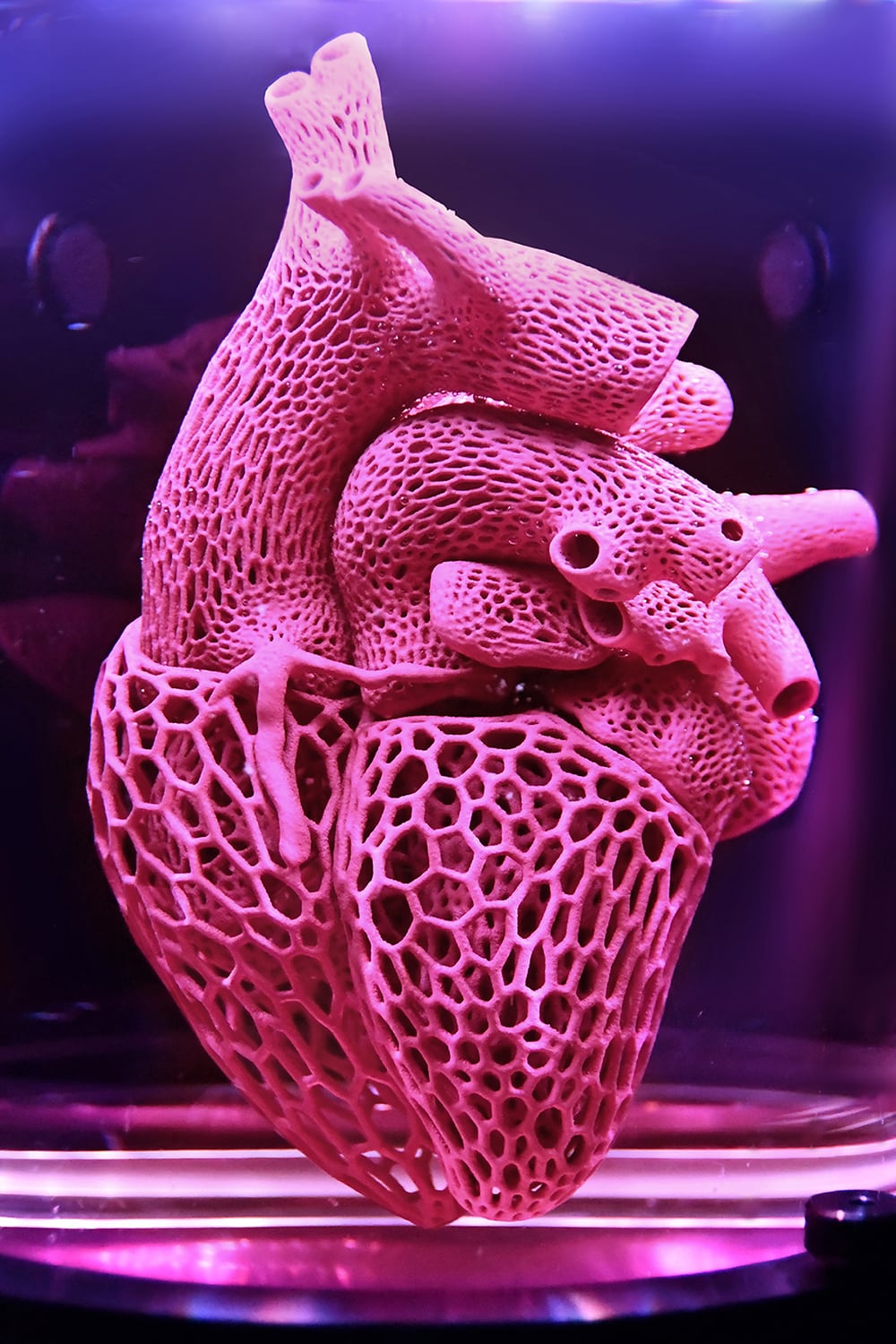 You have won awards internationally in a variety of countries. It is clear that your work has global influence. Could you speak to how bioart is important worldwide and what it might mean for people across the world to find common ground on this topic?
Thank you, from what I learn from connecting with a global audience is that the impact of my work is from the themes I’m exploring of technology impacting humanity. We live in a digital world and few of us are untouched by science and technology. It's impacted almost every facet of our lives from the food we eat, to the places we live, our environment, our health and our well-being. I don't know if the issue is so much about finding common ground as it is about the importance of asking hard questions about these topics and listening to each other - that can bring us together. When we raise awareness and start having discussions about these topics they can be complex and difficult to work through, but without confronting issues that using bio/technology presents us with and coming to some kind of global consensus of what is for the good of society and for the good of our future, we are moving blindly into the future. There will always be some bad actors and unintended consequences, but if we are working towards a positive future we are most more likely to get there.
This impact isn’t just from talks and talking though, it can occur immediately upon seeing my work – the questions I’m asking show through the work. I love when I'm in a museum and can hear people talking about my work but they don't know that I'm the artist listening in. This is the best feedback. A common response I hear when I see someone looking at my biortwork is: “it’s beautiful and it's scary” which is in large part exactly what I’m thinking too.
In the years in which you have been making bioart, has anything gone wrong? What has been your biggest challenge and how did you find a way to overcome it?
Nothing has gone majorly wrong as in no one has gotten injured or hurt. Every project has challenges, obstacles and failures but this is where the most learning, opportunity, and advancement can occur. Technically, many of my works are “failures” in a scientific sense: they don’t grow as planned, don’t have repeatable results, or just plain don’t work. But as an artist, bioethicist and futurist, this becomes a valuable part of the story of the work. Art and philosophy are ideal mediums for me in this way, the work doesn’t have to “go right” or work as intended to be successful, the failures and challenges become part of the story that is illuminated through my work.
It can be very intimidating, challenging and frustrating to work with cutting-edge exponential technologies, but I love it at the same time. My biggest challenges in creating work are in scientific and technical areas that are far outside of my knowledge base and expertise. For this, I collaborate with experts in their field, which is rewarding for all of us.
Your art is presented in a very scientific lab manner with dim lights yet bright coloured designs in glass tubes. What is the intention you have with the way in which you present your art works? Does the way in which you stage your projects for viewers have a specific meaning behind it?
I grew up in a lab with my mum where I watched and helped her with science experiments often. I was also raised Catholic, and my grandmother would take me to shrines and churches to visit relics. Both of these spaces often hosted living or once living objects that had to be regarded with much care and respect. Their aesthetic is that they were most often housed in glass vessels with specific lighting, which influences the way I present my artworks. I present a number of my pieces as both relics and scientific specimens as a way to frame the conceptual aspects of the work: that when we are using technologies and biotechnologies that may permanently alter humanity and change the course of our evolution, we must approach it with the importance of scientific research and care, as well as veneration of a sacred relics. I’m exploring both material and spiritual aspects of how our use of bio/technology impacts our future, and framing the work to be viewed through the lens of the importance of a deep reverence to the mystery and intelligence of life in that process.
You have accomplished a great deal of innovation in both the art and the scientific world. What do you hope to achieve in the future with your bioart?
Thank you. I plan to continue to create work that questions the implications of technology on our future. I hope to create artwork and make advancements in the process that positively impact humanity, our health and well-being and the future. 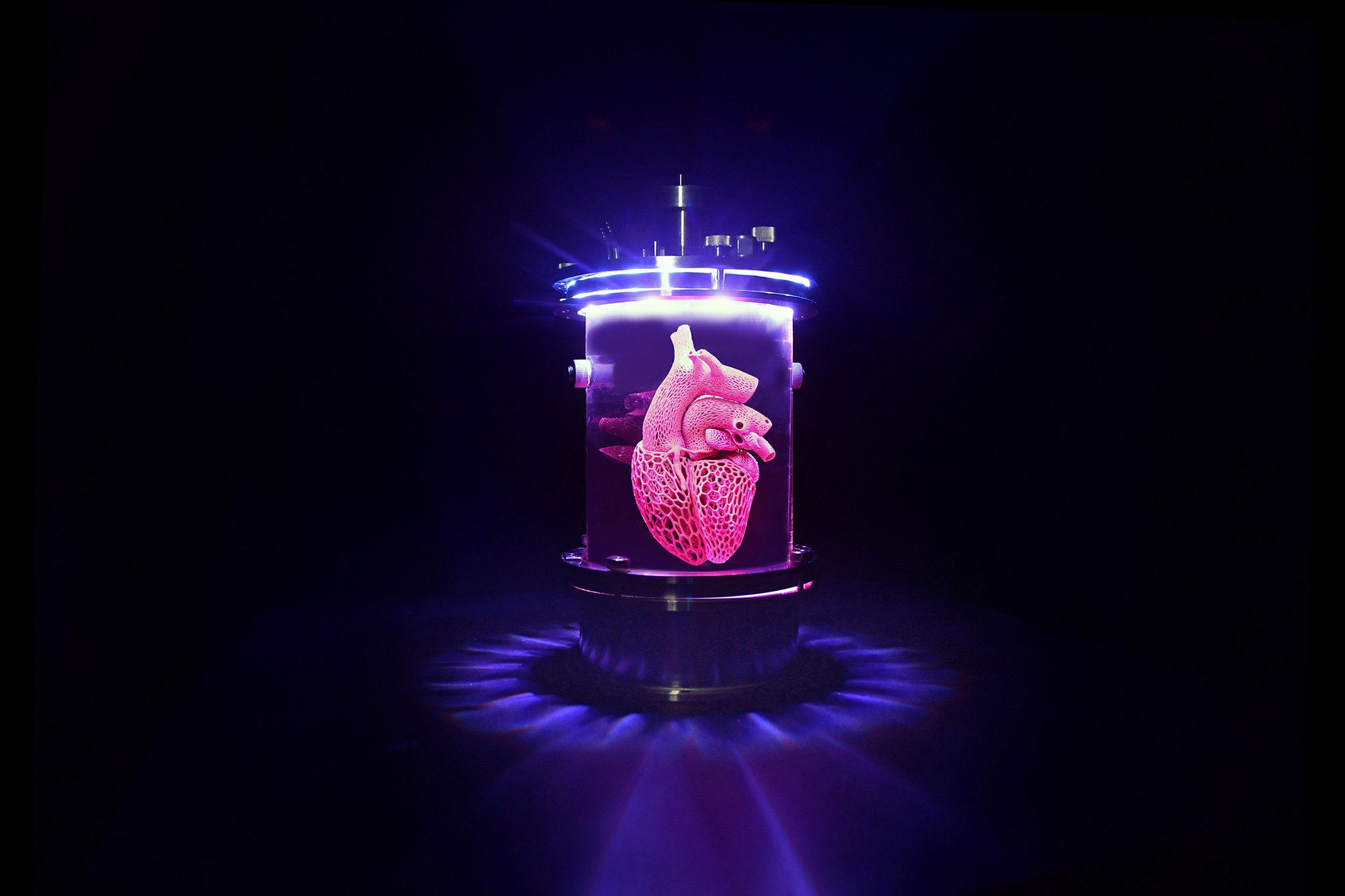