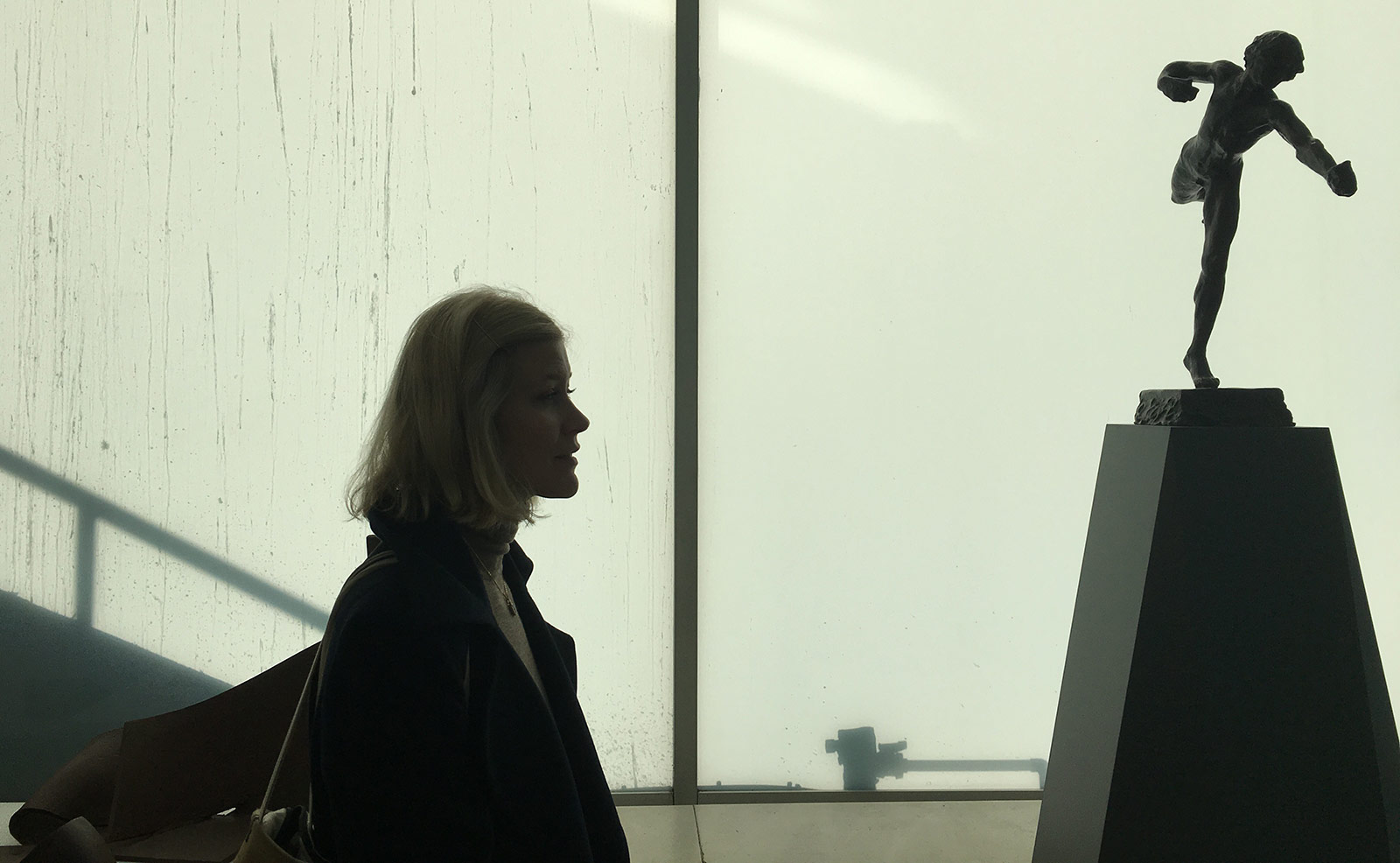 What is the difference between a designer and a fashion illustrator? One’s drawings are turned into garments, and the other’s become collector pieces, being framed, exhibited and elevated to the Art category. Today, we talk about these differences with Amelie Hegardt, who is a fashion illustrator. Her images are delicate and raw, express movement as well as stillness, and seem sketchy yet contain lots of details. But overall, beauty is what shines the most in her illustrations. Keep reading and see it for yourself. 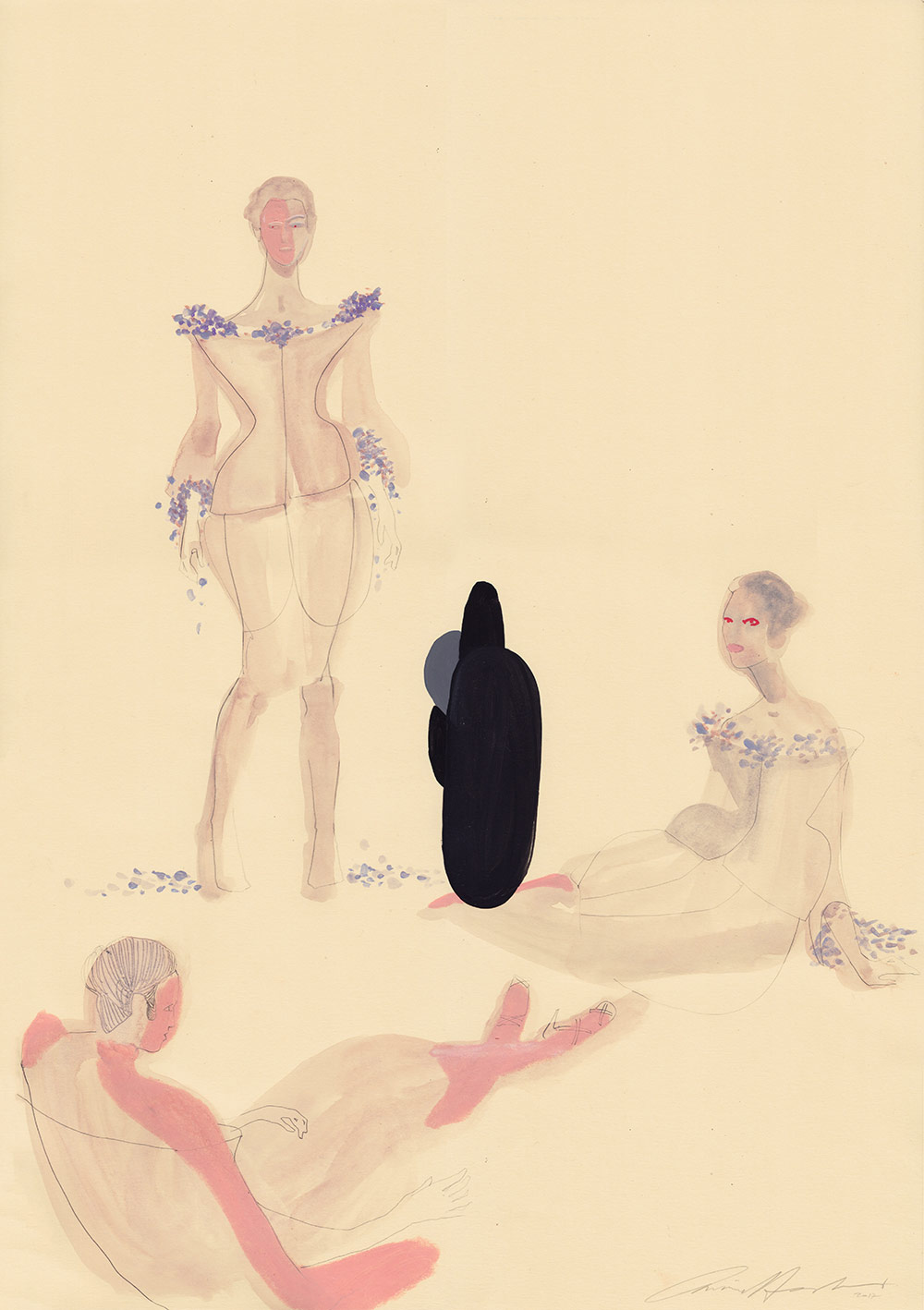 Talk to me about your upbringing. Where did you grow up and what did you study in university (if you attended it)?
I was born in Canada but my family is Swedish, so I grew up in Sweden. It was an outdoorsy childhood: cottages in the countryside devoted to horse riding.  I went to Stockholm School of Art, studied Art History at Stockholm University, thereon I went to Central Saint Martins in London.
At what age did you start with fashion illustrations and what drew you to this career path?
It was only recently that I started to think of how the skill of drawing manifested itself in my consciousness. I remember my first best friend, who grew up in the same village as me, a few houses away from mine. Her grandmother was blind but the mystery about her was that she could still draw – which we begged her to do. I have a very strong memory of the two of us watching her touching the paper and then these female figures appeared. We gasped with delight. Rather romantic, reflecting upon it now.  Also, my grandfather on my mother's side drew a lot and so did my grandmother on my father’s side. I only discovered it as a career option in my twenties. At the time, fashion illustration was a smaller scene compared to today.
You’ve lived in Paris, Milan, New York, Stockholm, Beijing and Tokyo, all very different to one another. Which city taught you the most about art and inspired you the most to develop the style you have today?
Each city has played a role in my life whilst growing up – as you do when moving through your twenties into your thirties. Paris was about language. I studied at Sorbonne. I didn’t know what I was going to do at the time. I did hang out with a few friends who went to L’École des Beaux Arts and it evoked my curiosity. But I thought they were cool whilst, I wasn’t, really.
In New York City I fell in love with the work of artist Rita Ackermann. I worked in two galleries. One of them sold works by Linda Stojak, whom I loved. I read The Bell Jar and was into that sort of thing. In the meantime, I started to work commercially with my first agency there. I discovered the illustrator Alastair while sitting in a waiting room at the doctor’s. I can still picture the illustration, it went through my heart and bones. He was contemporary with Aubrey Beardsley but not as famous. I learned recently that he lived in an area of London where I live today. I really liked that style of work then but my commercial work required something very different.
Beijing was an incredible experience. At the time, my permanent residency was in New York and it couldn’t have been more different. I was there on my own and no one spoke English. I lived in a courtyard in the Hutong areas, and bought a bike. I loved it.
Tokyo was the most difficult experience and place I've ever been to, but very important in my life, though. The cultural difference to Europe was mind-blowing. Even compared to a trip to Lebanon and Syria, I found Japan mind baffling.  I'm very suspicious about westerners fetishizing the Japanese politeness. Attending meetings was absolutely surreal. I was told that bad water was running underneath the area where the westerners lived, Roppongi. So sinister but made perfect sense.  I'm not sure it’s true. But it certainly made sense to me at the time.
I'm very grateful that I have since been able to meet a lot of Japanese students while teaching at Central Saint Martins. My respect for them. Coping with the cultural difference is immense, knowing a bit about theirs. I do think the famous print by Katsushika Hokusai, The Great Wave off Kanagawa, really is a representative image for my vision of Japan. It captures the mystical spirit and the power of the island. 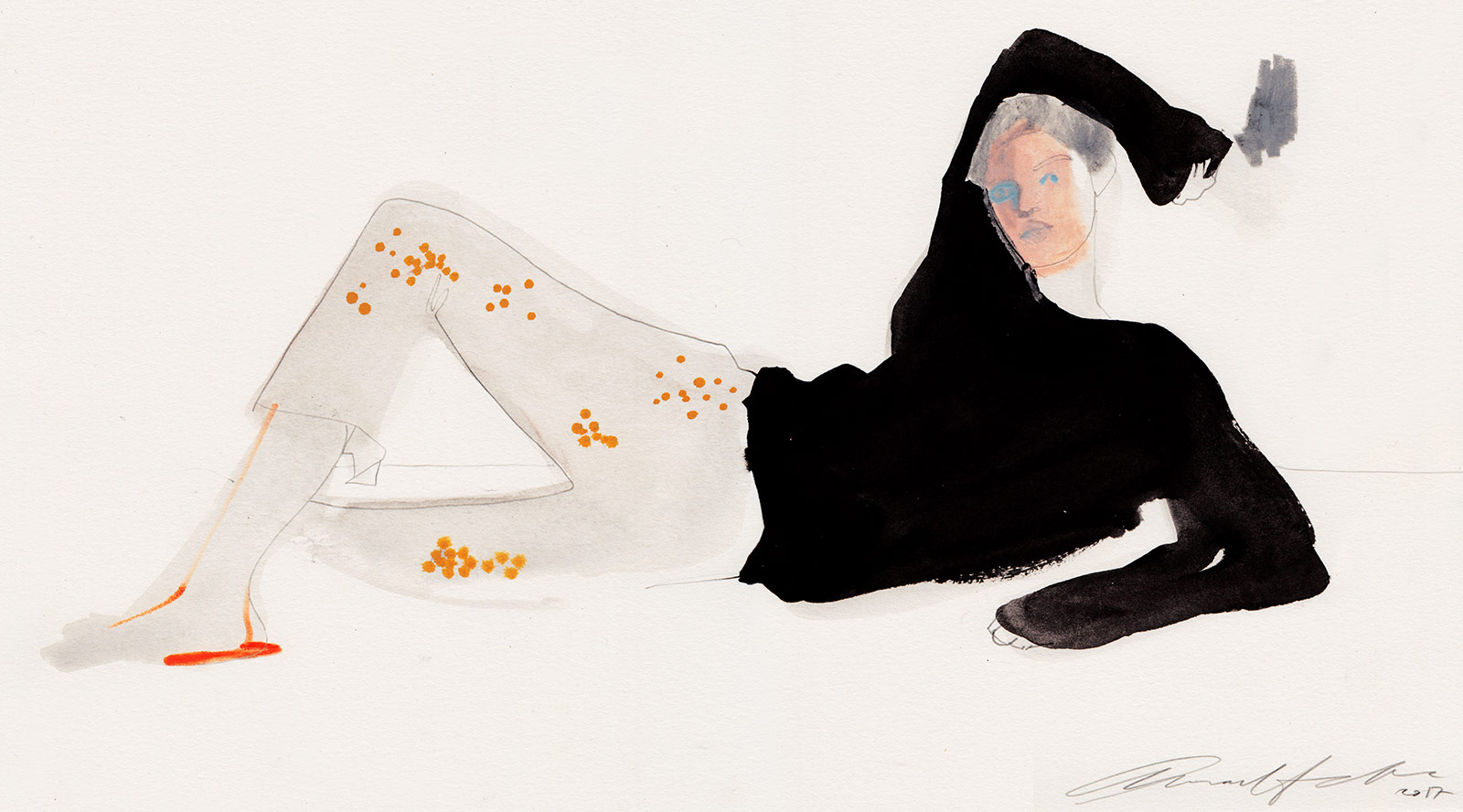 Now living in London, what influences your work? Do you find that your artistic style has changed throughout the years?
Probably, people and decisions I've made in combination with trying to look inwards. I don’t think I’m particularly influenced by the typical London style; looking at my work it's not really ‘London’. But the city happened to be the one I decided to remain faithful to. If New York is fast, phallic, and sexy, London is the female complex and everevolving city to me. Incredibly impractical, annoying and tough at times. I loved living in Stockholm too. It's just not London. When I met my husband, who's English, London became home to me. Of course my work has changed. So has the industry.
What materials do you use for your illustrations and why? What aesthetic do you aim to portray?
It really depends on what I'm working on and what the project is. I get nervous if I do the same thing over and over again. Materials at hand are gouache, ink, pastel, and graphite on paper.
If you had to describe your style in three words, what would they be?
Gosh, it's too difficult to describe a style. I don’t like it when it’s too pretty or flashy. I hope it can be as simple as it is interesting. 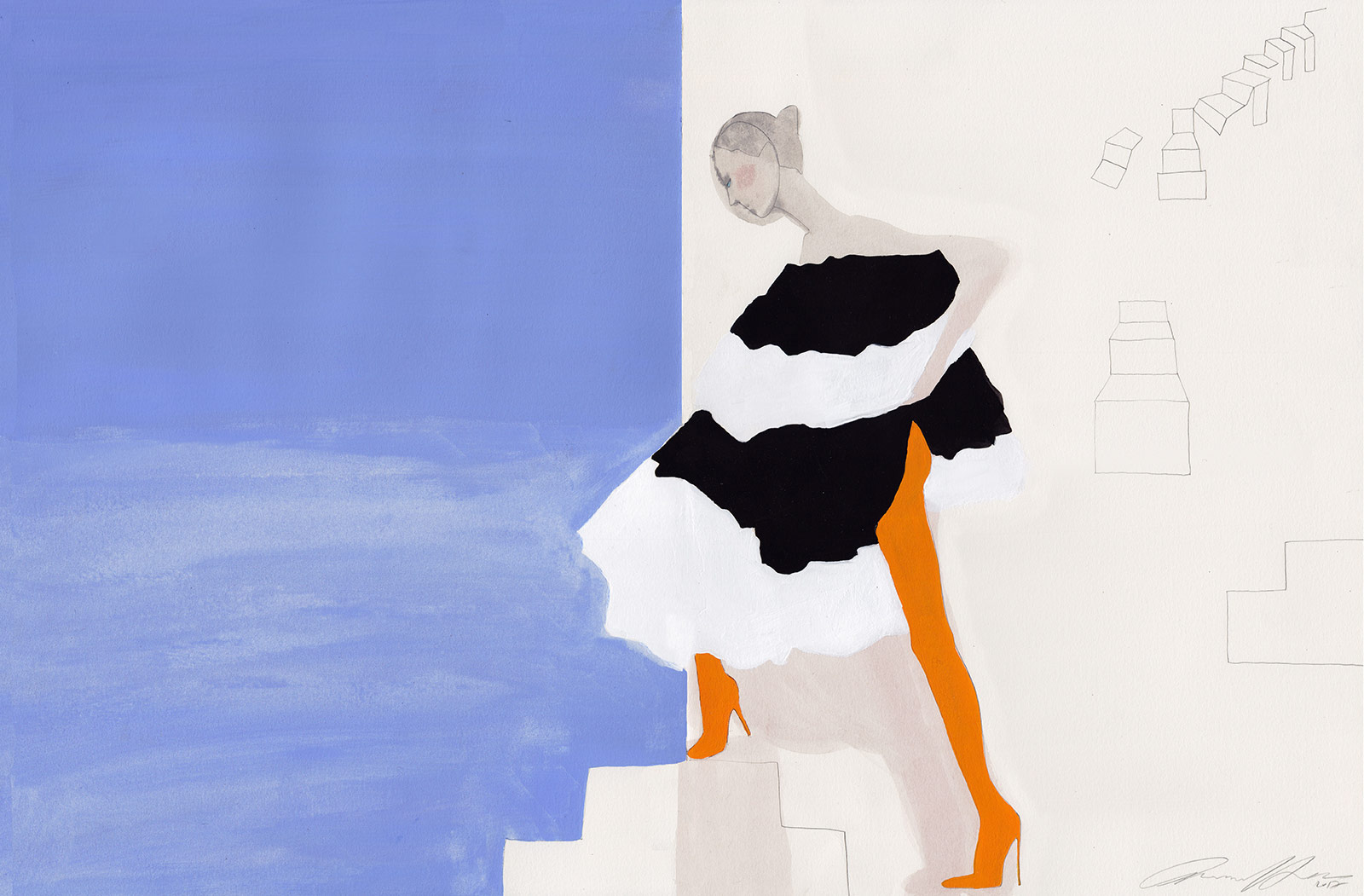 Depending on who your client is, does your artistic style have to change or does it remain untouched?
I think it’s part of your job to see what they want if it is a commission, but it needs to come from your work.
How has working for such a renowned platform like SHOWstudio helped you gain popularity? How was the experience? Do you think it marked a before-and-after moment in your professional career?
I received an email from Nick Knight asking me if I wanted to meet the team at SHOWstudio in 2013. I think they had just started the concept, asking illustrators to work during the fashion weeks. Looking back at it now, the project walked in just when I had had enough working with commercial commissions. He picked up on an illustration from my personal work. There were many things going on that year in which I felt I had to make a very big change. But it was hard to get out, cut loose and restart. The project for SHOWstudio surely helped me to steer onto that route. I think their support is very valuable to a lot of illustrators.
Your work is a mix between fashion and art. In your opinion, how interconnected are these two fields and to what extent can fashion be considered as art?
This question will never fade. Jean Cocteau, Salvador Dalí and many more artists have worked with the fashion industry. In my opinion, fashion illustration is a craft. To liken it to art is to undervalue what a craft is and miss out on its virtues. I visited a selection of fashion houses recently due to a job I did for Les Echoes in France – seeing haute couture and meeting the craftsmen working on their exclusive pieces in their atelier was incredible. I can see now why people can buy those dresses for that amount of money, theoretically.  Again, it is the craft that is impressive and I feel no need to tip over into using the word art, which has a very different set of priorities. 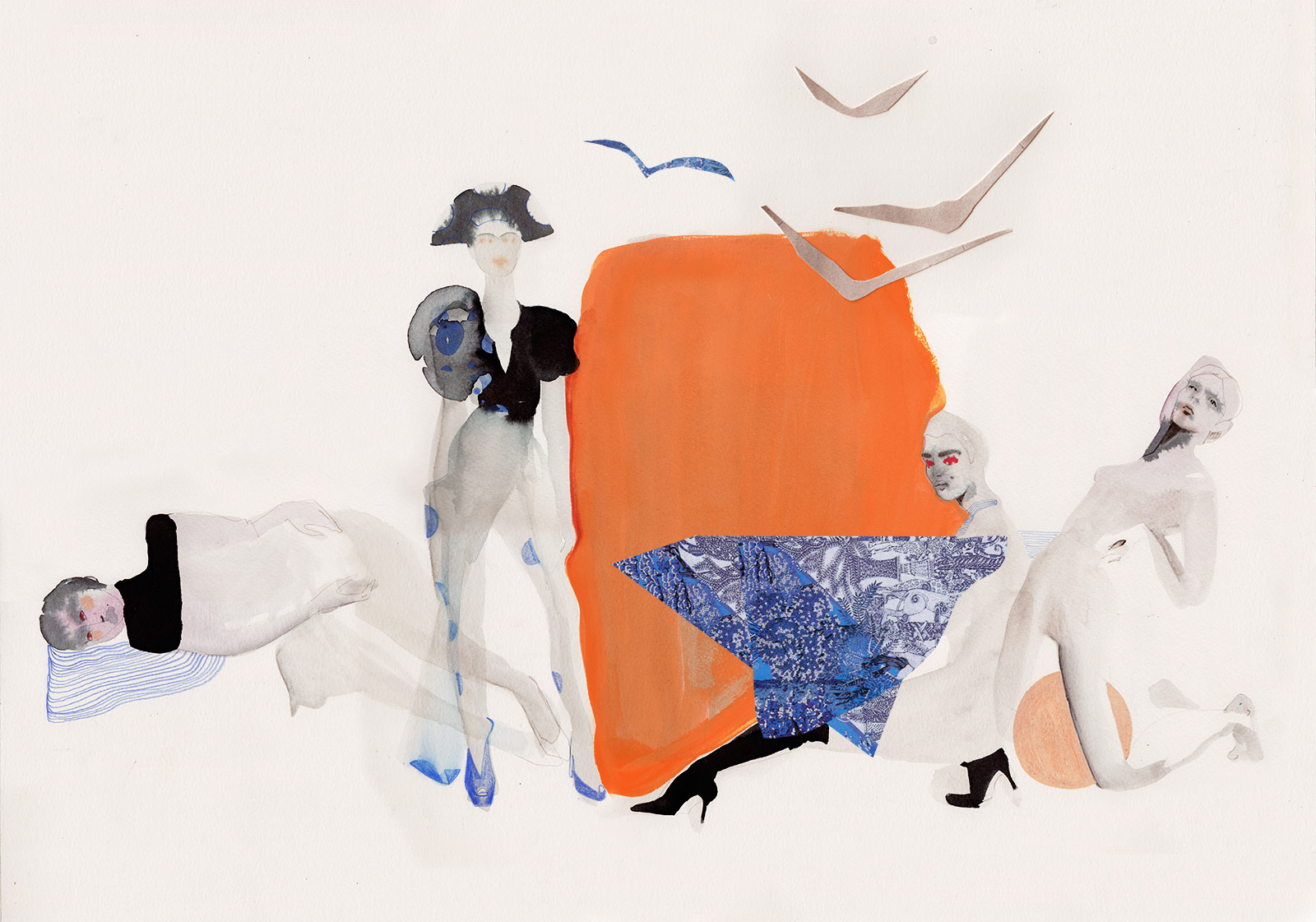 What artists in particular inspire you?
Each time I've been to a mime performance I've been gripped. Truly inspired. I find this world so independent and I envy the physical aspect. The work of Pina Bausch, the choreographer, and Louise Bourgeois, the artist, will always make me dizzy with envy and thrill. As for artists, I am inspired by Matt Ager, Laurence Owen, Mamma Andersson, Evangeline Ling, Lily McMenamy and Tanya Ling. For fashion illustration, I adore Rosie McGuinness, Aurore de la Moriniere and Cecilia Carlstedt. Fashion designers that I admire are Charles Jeffrey’s brand LoverBoy, Simone Rocha, Shrimps and Wales Bonner,
How often does your work end up like how you’ve envisioned it? Do you ever have any happy (or unhappy) surprises?
I find catwalk drawings very satisfying as they often go with the flow easily. But there are times when nothing works at all and doesn’t turn out anything like I had imagined. Equally, there are days when things turn out just as I’d liked or even better. That’s an incredible feeling. So yes, my work progress consists of happy/ unhappy surprises.
What are your plans for the future?
I’m starting a perfume brand and I’m also expecting a baby. 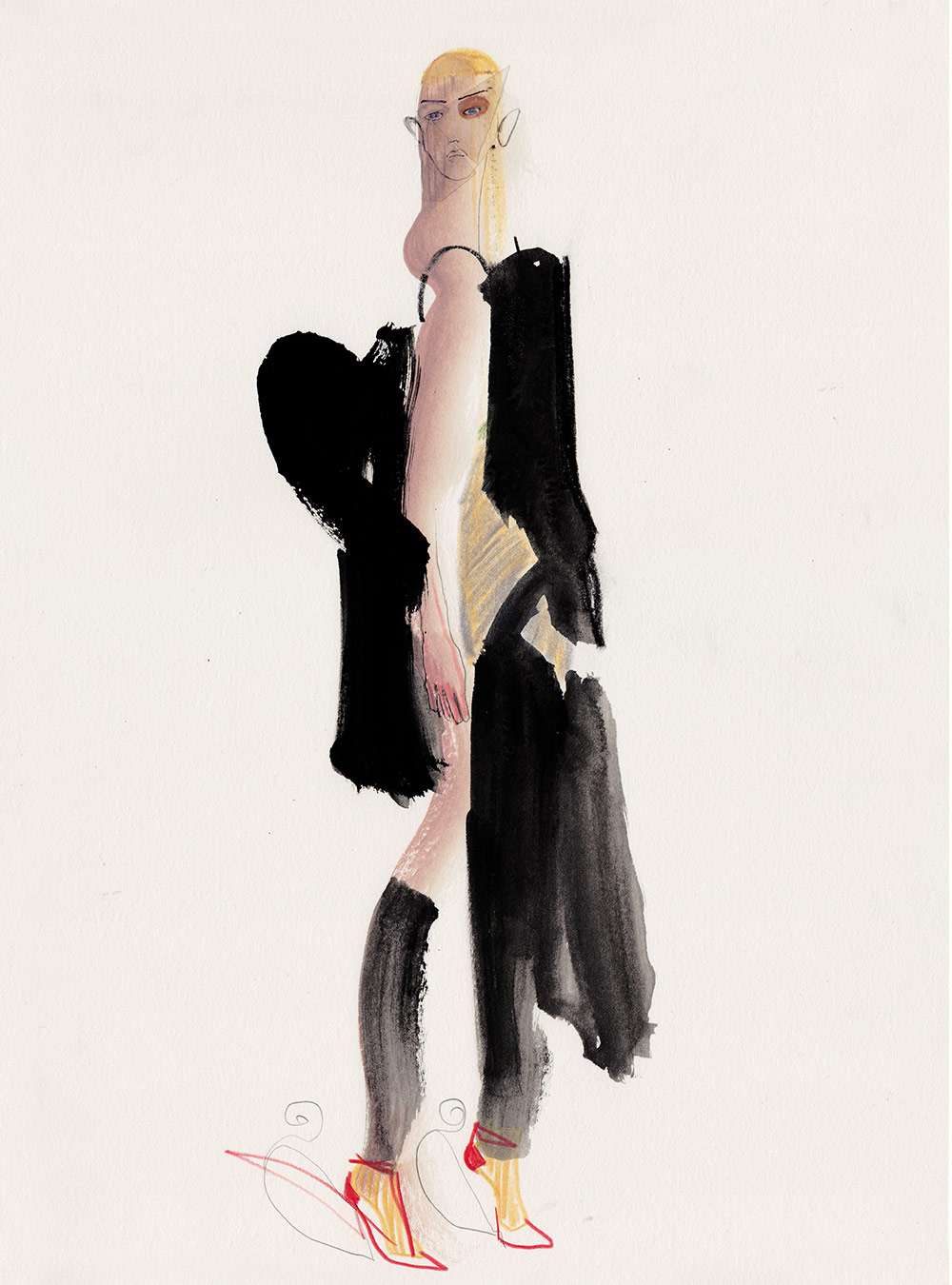 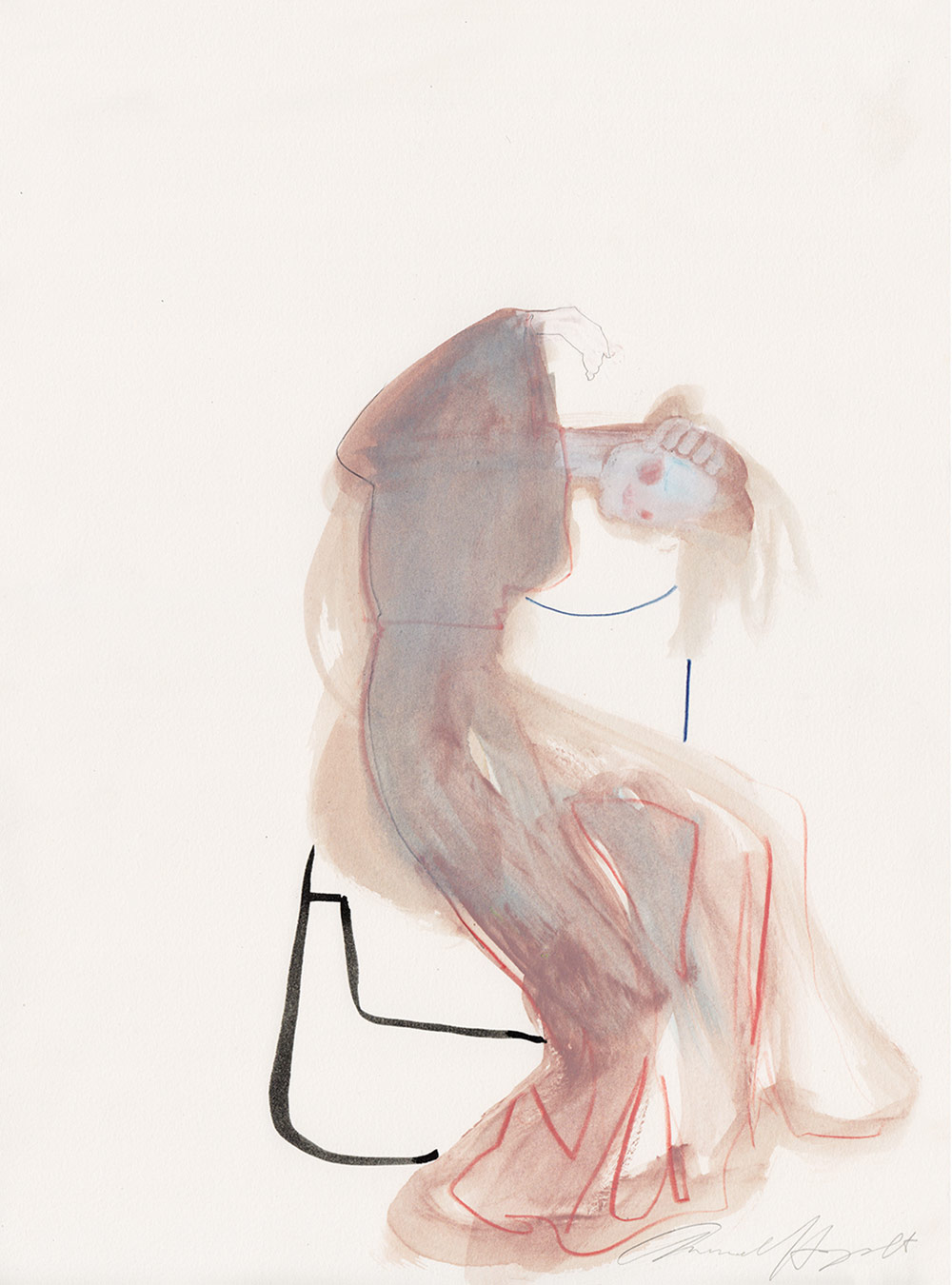 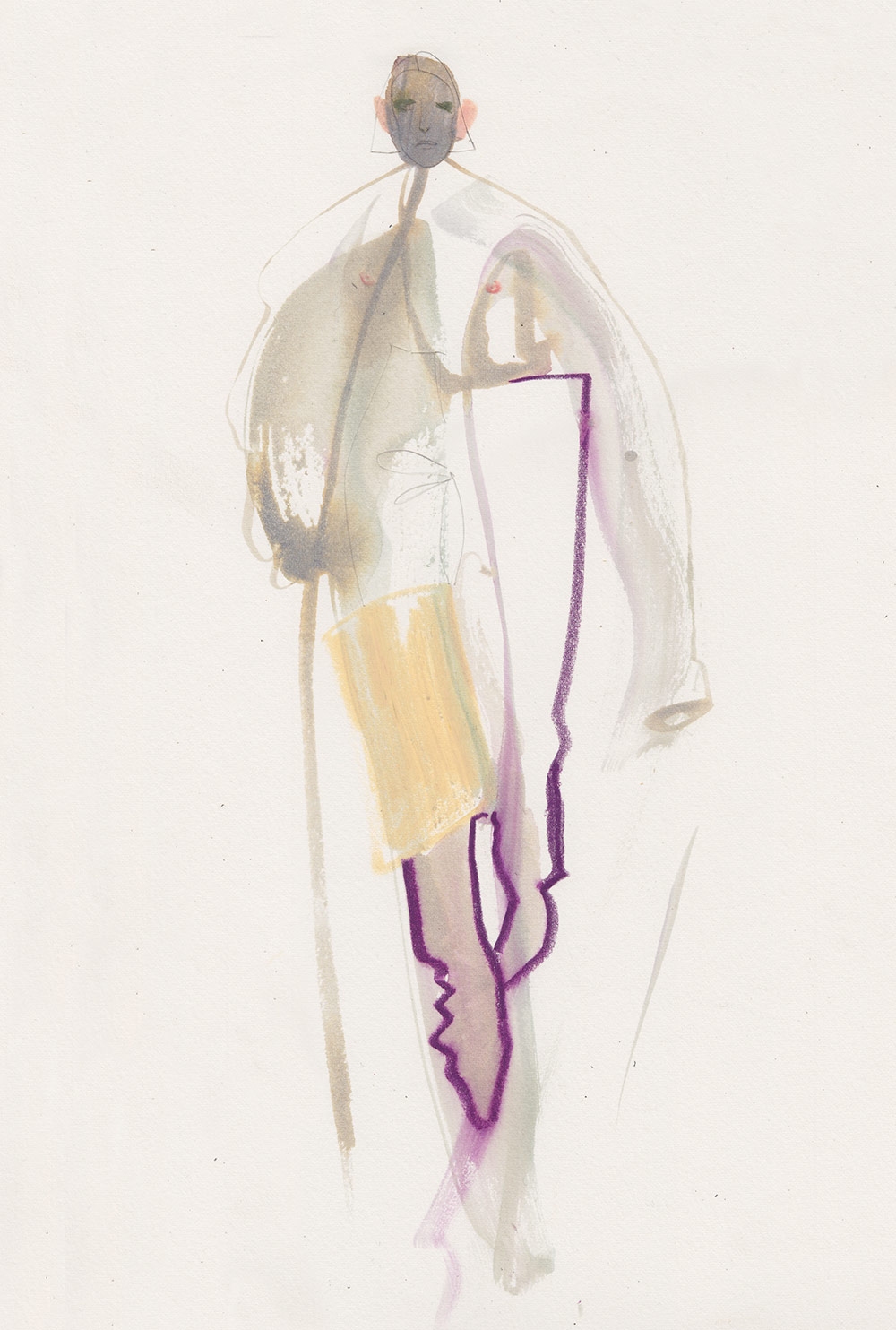 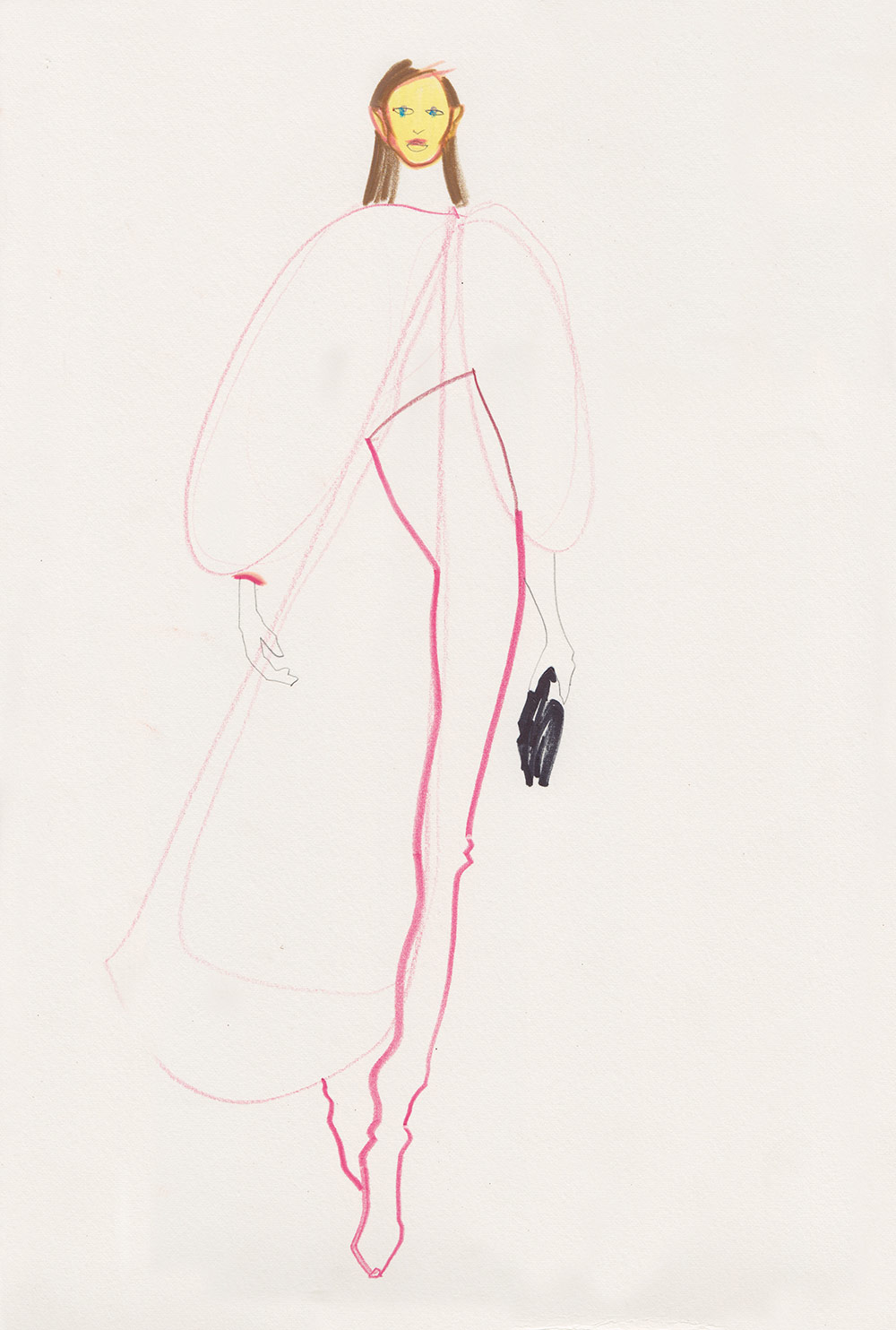 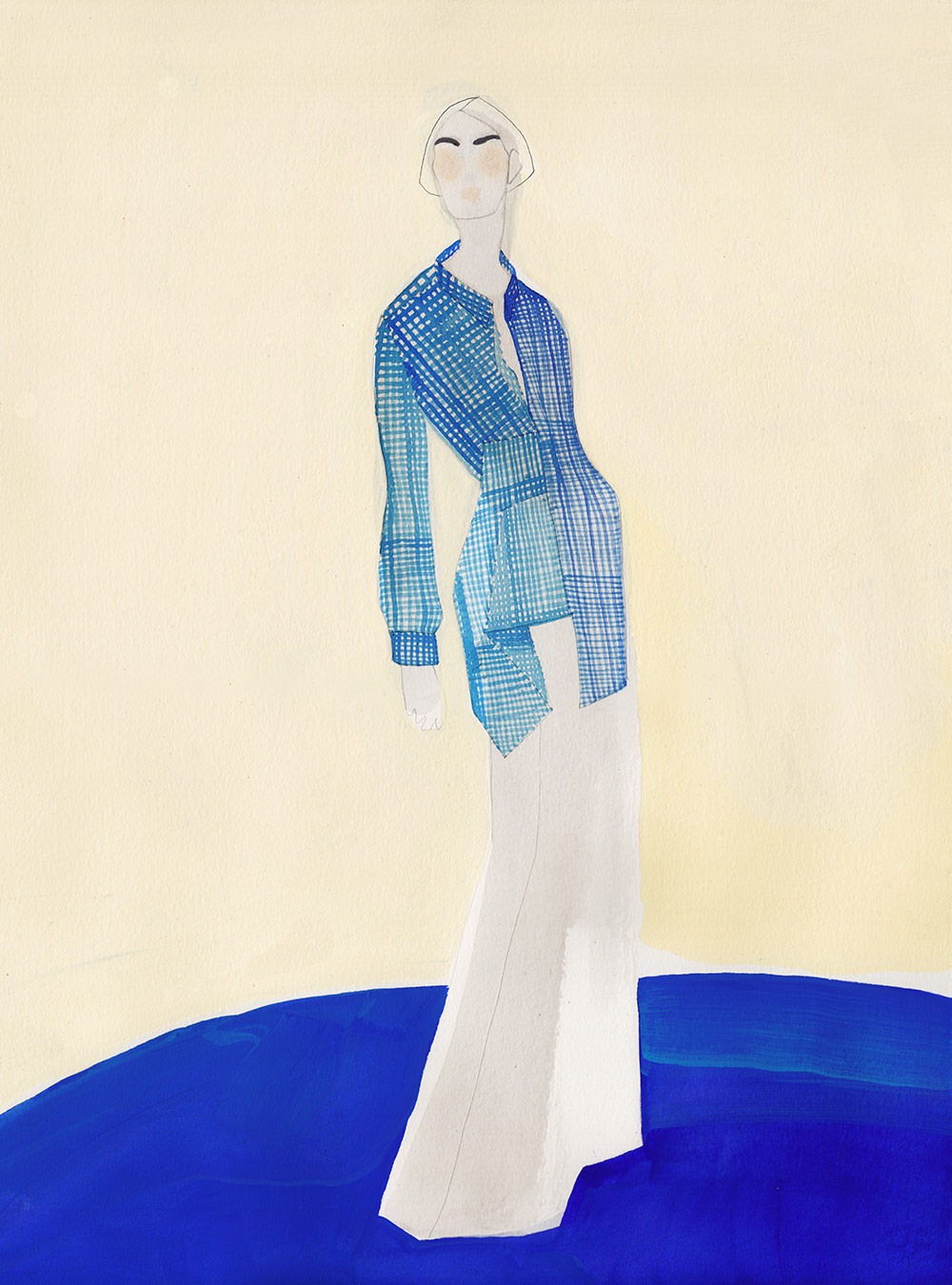 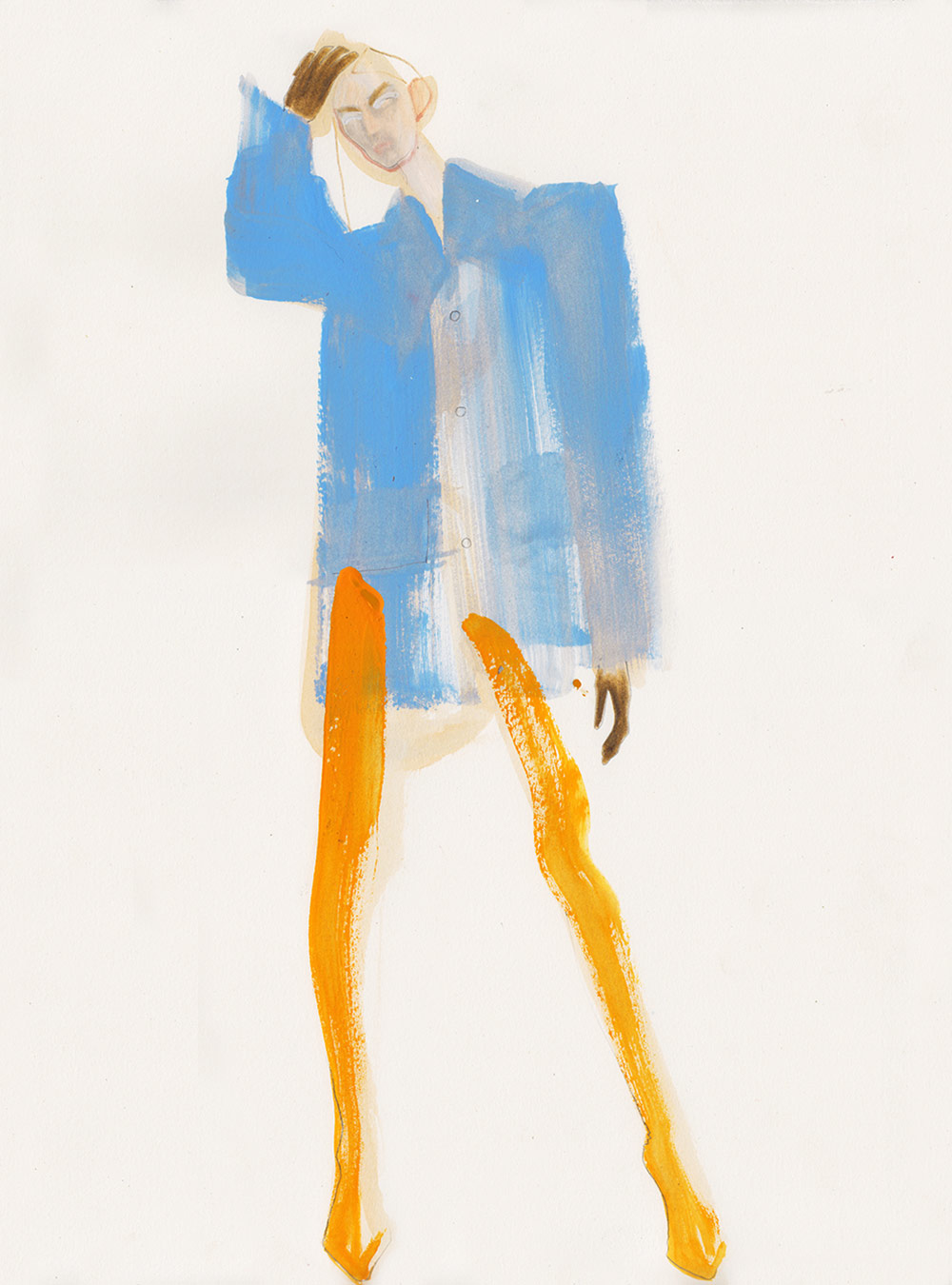 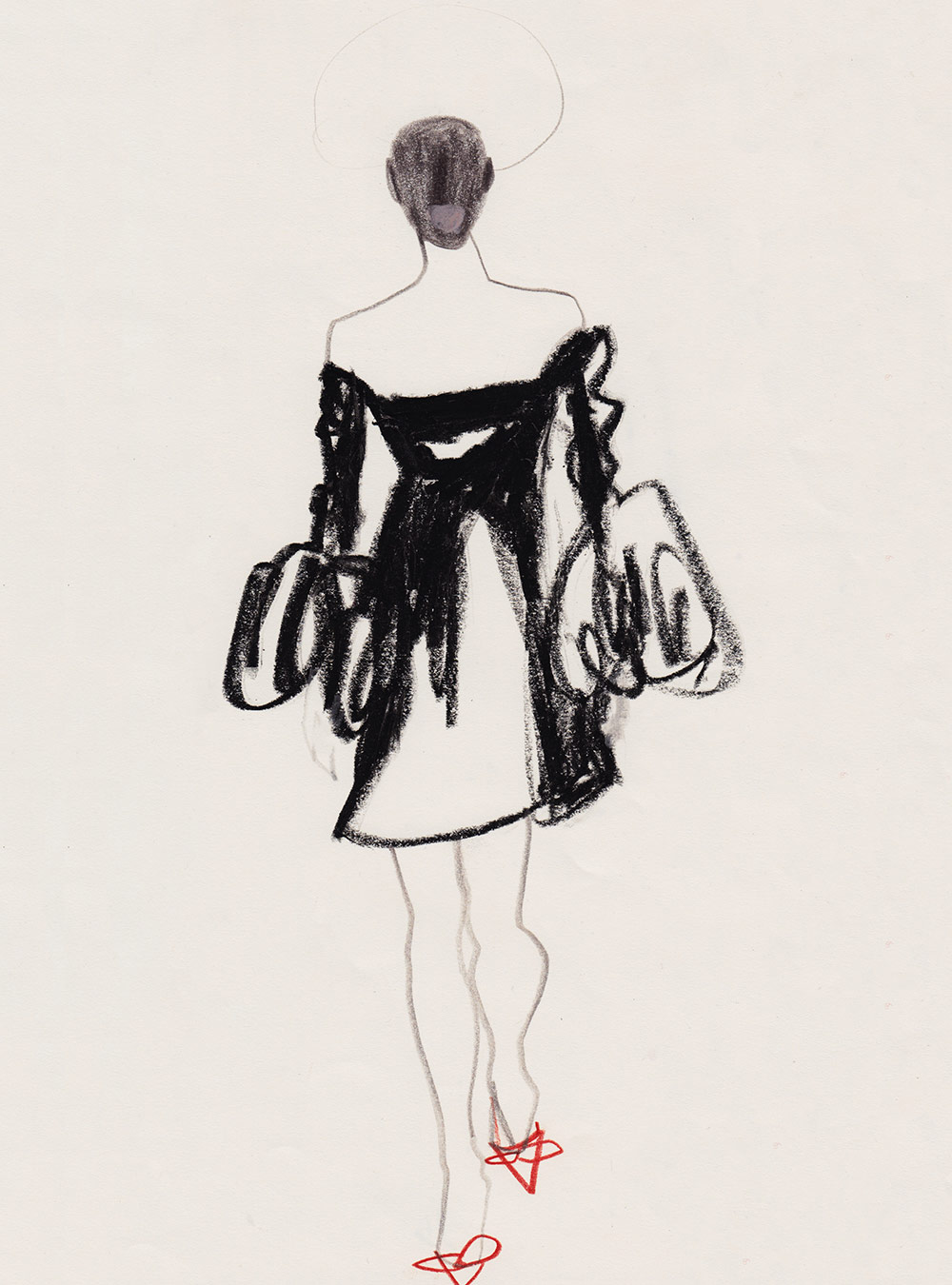 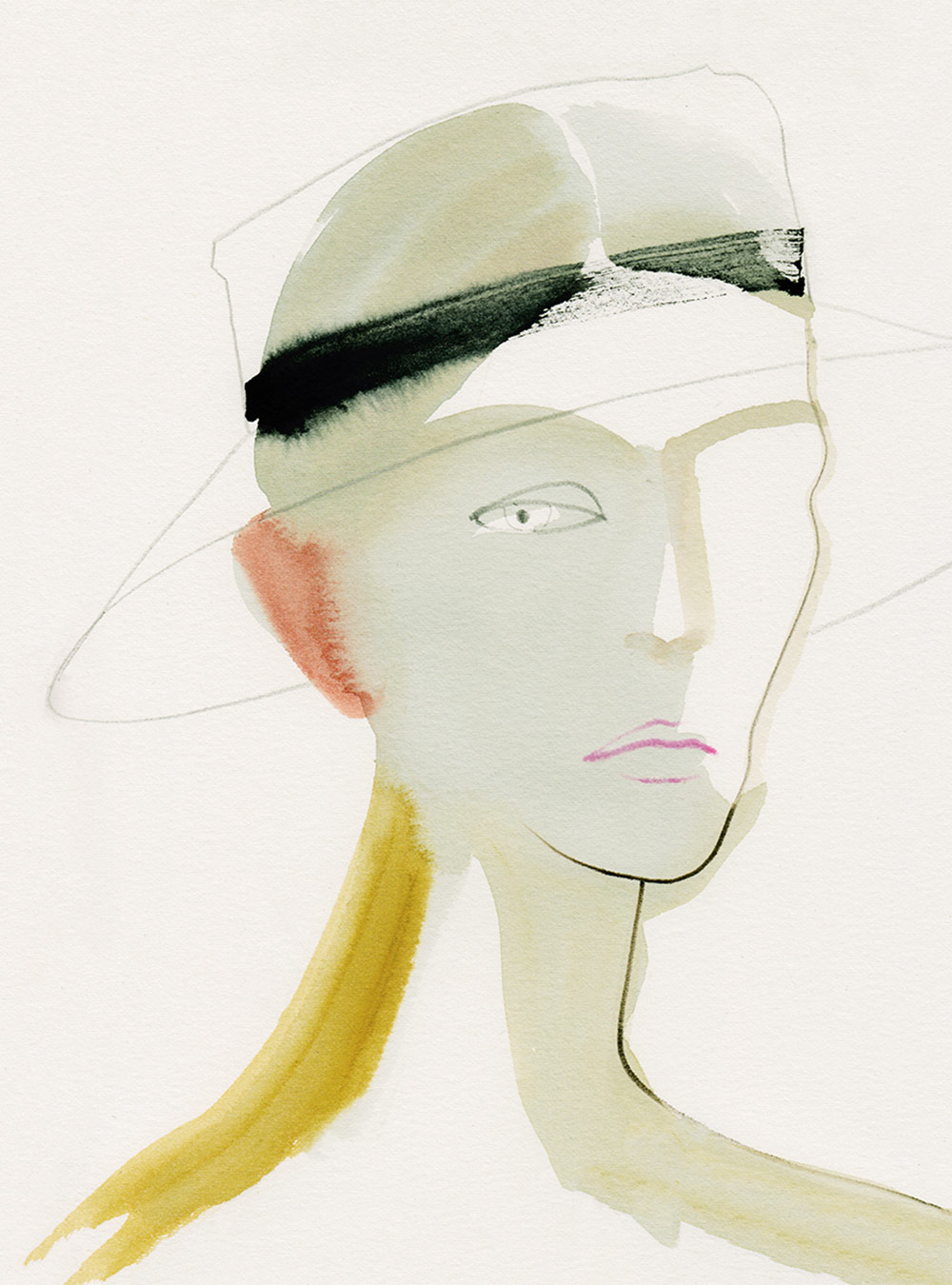 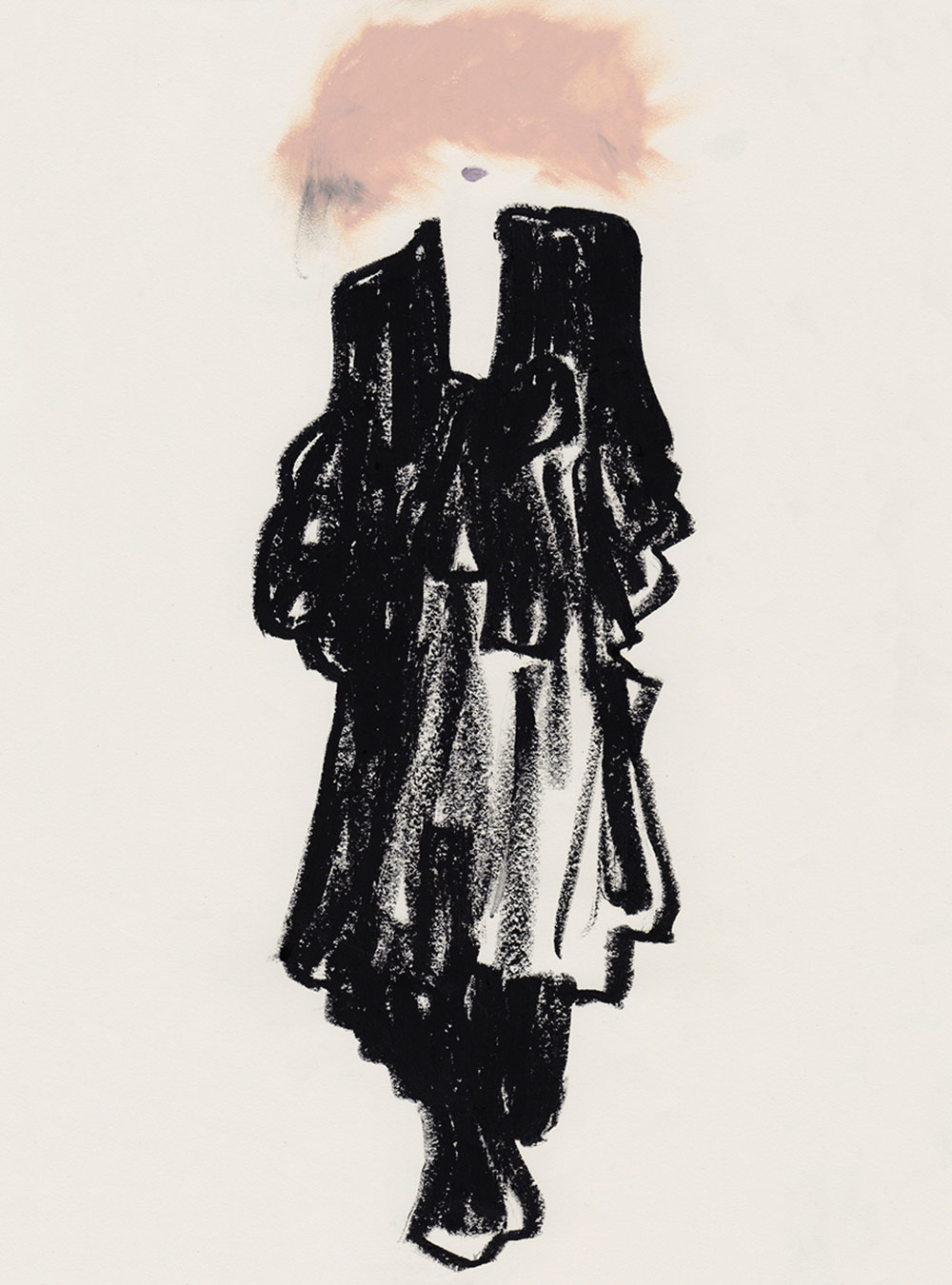 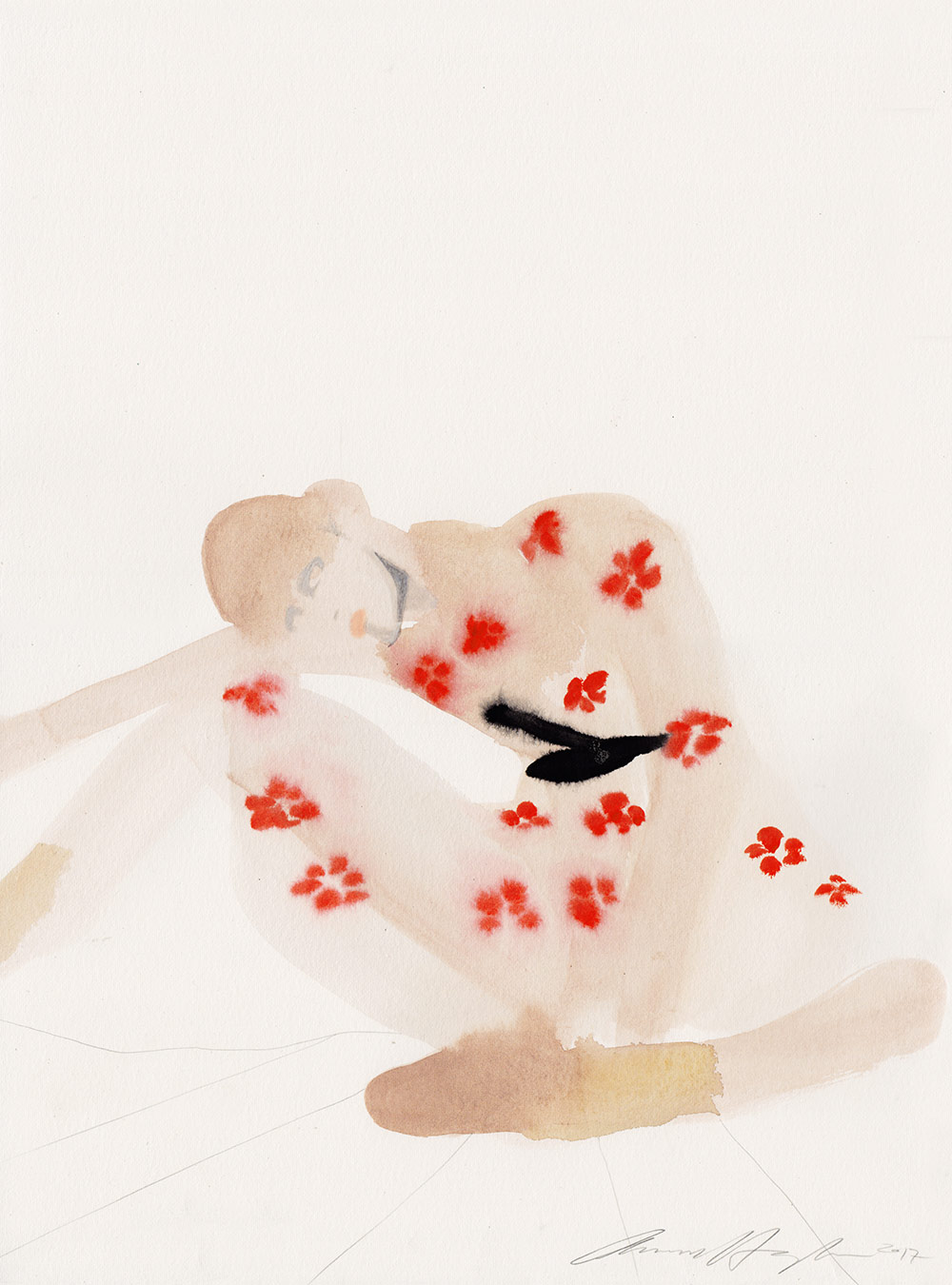 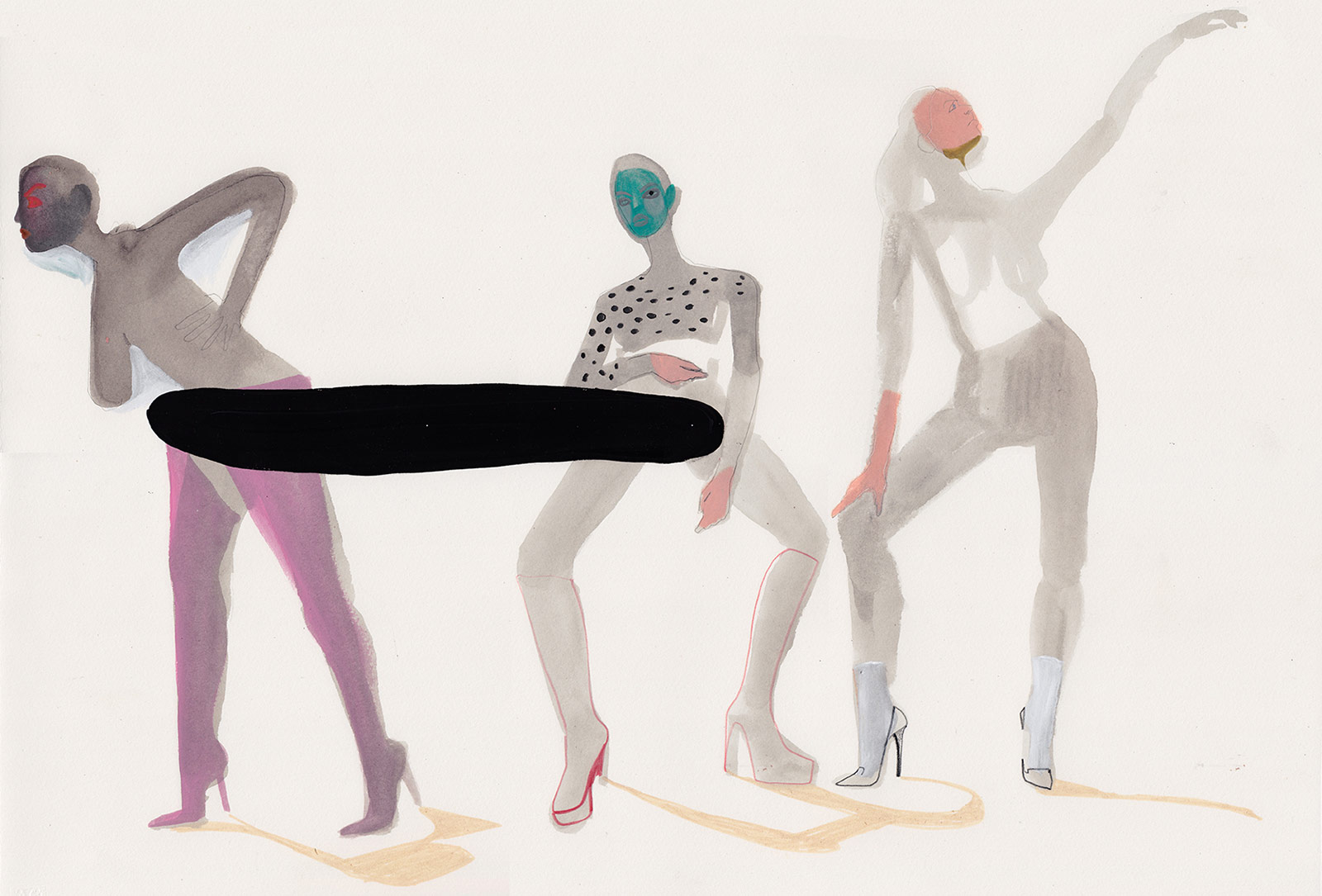 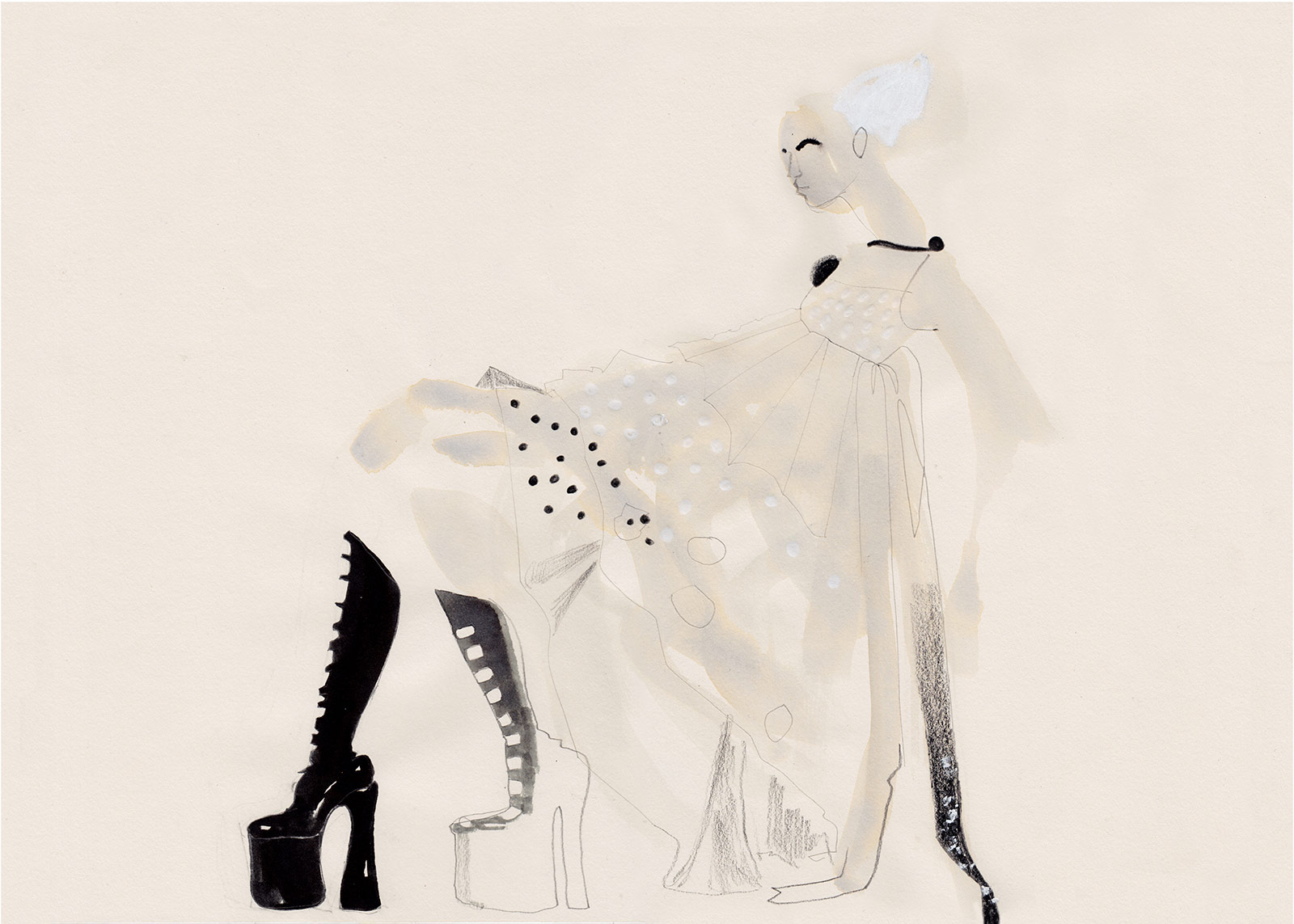