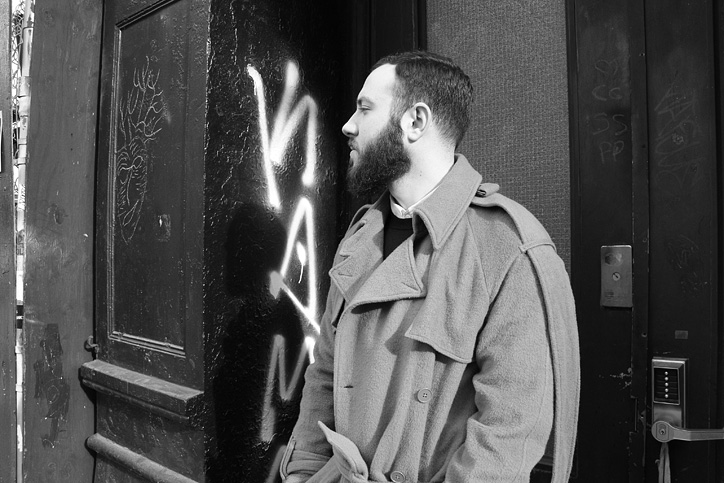 Albert Moya is the director of “American Autumn” and a young Spanish talent in U.S.A. He talks about his past, present and future with the kind of honesty and warmth that leaves one with a smile in the heart for hours. We met up with him to chat about the way he builds his characters, the sculptural process followed to develop a personality and all those masks we’ve all got so used to wearing. From how to look, to how to communicate and how to deal with the extreme conditions one finds when living in NYC, Albert is one we want to learn from.

If we look at your film “American Autumn” and some video collaborations such as “You don't know me” from The Polyphonic Spree , it’s hard not to talk about your work without realizing that, in fact, children are the main protagonists and play adult roles most of the time– where did this idea come from?

It has to do with a period of time in life – childhood – that contains a combination of feelings and lessons learnt that, at the time, happened in an organic and natural way and help understand what life is about later on. Being a kid means one’s in contact for the first time with vulnerability, innocence, curiosity, risk, danger, loss, becoming someone else,… After that comes melancholy, and then this keeps on repeating itself throughout different cycles, and probably even in the same order. Each cycle contains less innocence, maybe more curiosity, but the loss might be more powerful. With time, there may be more risk, but we have been experiencing that since we were kids and, observing it in a child for the very first time is just so magical and pure… It is probably one of the most beautiful processes one can observe, and I always feel very emotional about it. It is the first catharsis, a catharsis that happens in silence, deep inside, only leaving a mark (for some people a wound) that one won’t be able to understand or process (or scar) after some time. Time, mistakes, evolution, loss, melancholy, sadness. All those things are there and are the ones that make me work with kids. They are so generous and give so much, they have no fears.

Talking about “American Autumn”, what were the references for the characters?

The references were real friends, friends that had never met in real life. I thought it would be interesting to put them together for the first time in the script and play with the possible connections or disagreements. Once the script was finished, it was great fun to find we had real references for each character. So both costume design and make up departments had a visual story as a reference starting point. I was highly influenced by Woody Allen’s early work and the different movies by Noah Baumbach which described very well American Autumn’s concept. In addition, for Jerry for example, we found a bunch of pictures of Jarvis Cocker that explained the character really well, for Catherine we thought of Meryl Streep in W.A's Manhattan, for Michael we thought of super stylish and clean Wes Anderson, for Trevor it was Dustin Hoffman in Kramer vs Kramer and for Pauline we put together pictures of Diane Keaton, Kristin Griffith and Mary Beth Hurt in Interiors.

Elias Confort McConnell plays the only adult role in the film. How does the presence of an adult affect the final outcome?

The film presents the kid's (sur)reality as something normal and universal and plays with that message until the very end of the film. To me, it was important to have the presence of an adult at some point, just to make the viewer feel a little bit uncomfortable. It was a way of showing where the kid's game finished and the real adult shit started, or where the boring mature life starts feeling like a kid's game.

What’s the biggest thing you learned while making “American Autumn”?

Patience (it took a while), and to work with other people under pressure and with an intense schedule.

There is a lot of talk about the "micro budget" feature being the new "short". Do you agree with this statement? Or are shorts still an important step for first time directors?

Personally, I do think shorts are very important for first time directors, but that doesn't mean people care about them. I think the 10 or 20 min format is still something very strange for many. If someone is going to find time to sit down and watch something, they will probably prefer to connect with a feature film as it's something they are already familiar with.
I feel shorts are incredibly important for young filmmakers as it gives us the opportunity to explore and try all the different stuff we like. I remember Sofia Coppola in the Making off of  Somewhere. She was saying that shorts allow one to try all those things one won`t be able to try when doing a feature film, and I completely agree with her. That’s why shorts can either be really beautiful or, on the other hand, suck and make you feel miserable.

What made you decide to make the transition from observer to director?

I liked to write and I liked to act, I liked to play music (clarinet and some piano), I liked working on art direction and fashion but, at the same time, I was a bit lost not knowing where I wanted to go exactly. In the end, I thought directing was a nice way to put all those things together. I did not think much, it just happened.

Did directing a film make you watch films differently?

I guess so. I like to look at all the corners of the frame or places where the action is not happening, if the characters are arguing in the right side, I will always look towards the left to see what are the extras doing or the kind of details people tend to miss while focusing their attention in the main action. I don`t know, I remember a few years ago an old friend of mine who’s a filmmaker told me I would never watch movies like the ones before, but I don' think that’s actually true. When I’m watching a movie I love to see how all these great actors are working at their best, putting their soul in what they are doing. I feel they are being so generous, in a way it's like they are naked in front of everyone, forgetting about their everything just to make their characters true. When that happens I also forget about everything and just follow them through the movie. It feels like magic, it's about this powerful connection with someone you’ve never met before but you feel you already know a little. Moreover, I believe that if you're open, they can also help you. Right? it’s like a song, I feel that with music too. But of course, it's more powerful with movies.

How has Albert Moya been facing a city like NYC these last three years?

There are times when it's amazing and you feel the luckiest person being here, others it's more like…you know, it's hard and you may want to be somewhere else where winter and summer are less aggressive and people are a bit more latin, but I think NYC gives you a lot. I think it's a city that makes you connect with who you really are, as you always need to know how to react when the weirdest situation happens and you're involved. I feel it's a wonderful city where it's good to know who you are and what you want to do in order to not miss all the opportunities the city offers. I've made a few friends here, not only friends, collaborators too, who I’ve admired and had as a reference for years. Being here has given me the opportunity to share my work and experiences with them. I feel this is one of the beautiful things that happen here in NYC. So, it’s a place where people feel free and alone and interesting connections can happen.

I'm preparing a personal project in Barcelona, pretty excited to come back home and have the chance to work and collaborate with people from my country. We hope to shoot this summer and I can't wait to be there with all the crew. Besides, I just started collaborating with NOWNESS, we will be shooting a few films this spring and I'm also writing the script for my first feature. Let's see what happens.