A place to bury strangers

Where the grass is always greener 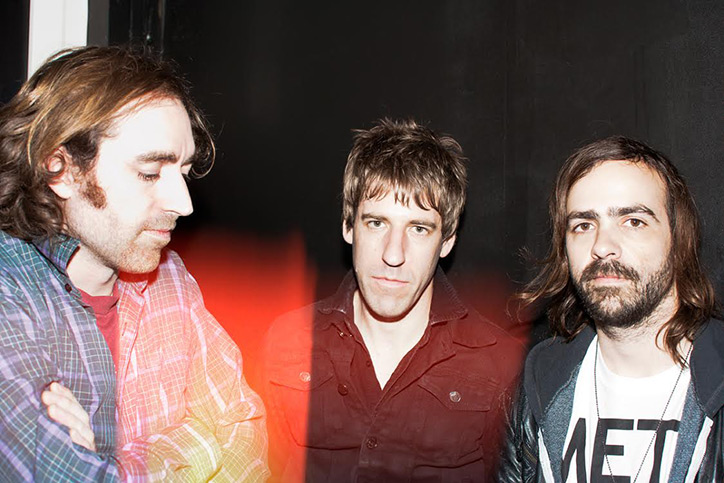 New York City-based shoegazing trio A Place To Bury Strangers (APTBS) is introducing around Europe their new record, “Transfixiation”, their fourth studio album and second long play in Austin’s label Dead Oceans, since they released “Exploding Head” in Mute records. Oliver Ackermann, also founder of Fx-pedal manufacturer Death By Audio in Brooklyn, is the frontman and guitar player of the band. His band-mates are former The D4’s bass player Dion Lunadon and Alaskan-born Robi Gonzalez, on drums. We met them in Scandinavia before they headed back to the U.S, where they performed with The 13th Floor Elevators at the Austin Psych Fest, now called Levitation.

When did you begin with the band?

The band formed around 2003, when I moved to New York. Some people I met were looking for someone to play drums in their band, they wanted to sound like Slowdive. I was like, “I’ll play drums in your band”. We had a practice and after that they said, “Ah, we don’t want you to play drums, you should play the guitar”. So from there we accepted any single show we could possible play, we performed a lot in New York and I guess people just started to notice it.

That period involved supporting bands of the likes of Nine Inch Nails, Brian Jonestown Massacre, Black Rebel Motorcycle Club, and MGMT. What did that period signify for you?

It was a justification for making the music we had been working on for years, and was sort of struggling and trying to set up tours and make things happen. It was pretty much impossible, nobody wanted to listen to a really crazy, fucked up, loud band at the time.

I guess it was tough in the initial years but I’m sure that the hard work paid off.

Totally. The shows were insane, really good. Some of the fans, like the ones from NIN, were hard to win over, it would be almost like we were pissing them off when we started playing, because they really wanted to see NIN and they were like, “What is this trash” (laughs).

Ridiculous, so silly. You got all access; we were running around, going to utility rooms and throwing chairs through the halls, doing whatever we wanted. It was awesome. Crazy.

How did you find that experience musically speaking?

The sound is totally different in a stadium. And you spend a lot of time further away from people and further away from each other on stage. I think if we were doing it again, we would do things differently. But no regrets whatsoever.

And then you signed up with Mute, right?

Right, I guess they came to see us to some of the shows. I am such a fan of Mute. It was very easy to say yes to them. I mean, how would you say no! (Laughs).

Emil Nikolaisen from the Norwegian band Serena Maneesh plays with you in some of the songs of the new record, “Transfixiation”. How did that come about?

Yeah, Emil is playing in two of the songs on the record. I’ve known those guys forever. I think the first time they toured in the U.S I played with them in a couple of shows in New York. They were in town and we went to a party over my house or some bar, and we ended up talking and it was like, “Emil you should come and play guitar in some songs”. We went to Oslo for three days, had a good time and tried to make some crazy shit. We recorded six songs or something like that, and put two on the record. The Norwegian government set up a tour for us, they flew us from place to place and we got to record for free at this place and they paid money on top of that. So we were like, “No questions, let’s do this” (laughs).

It is so fucking awesome, congratulations Scandinavia, hallelujah. That would never happen in the U.S. We recorded at Edna ABC Studios. A beautiful place in the countryside, with the mountains… Freaking awesome.

The final mix was done there as well?

No, I did the rest, the final mix and the master, in New York. Everything comes together at the end. The way we work is different from everybody else’s way; we don’t finish the record until everything gets finished at the same time, at the very end. So the mix or any song can change until the end.

Do you need a lot of editing or do you prefer reel2reel?

Recording with tape is a cool way to do so, but you have to be a really good musician. If you record on tape 5 minutes without fucking up at all, it gotta be fucking rocking! When recording with the computer, you don’t have to be talented at all, you jut sit on the computer for hours. And we recorded this album in the computer, doing very little editing, but that’s because we recorded it for eight hours a day for a month or so, and it would’ve cost us too fucking much to do that.

The next tour we are going to do is coming up at the end of the summer. We are going places where we haven’t recorded, new studios and stuff. You get bored if you do the same thing all the time, so we try to approach things differently.