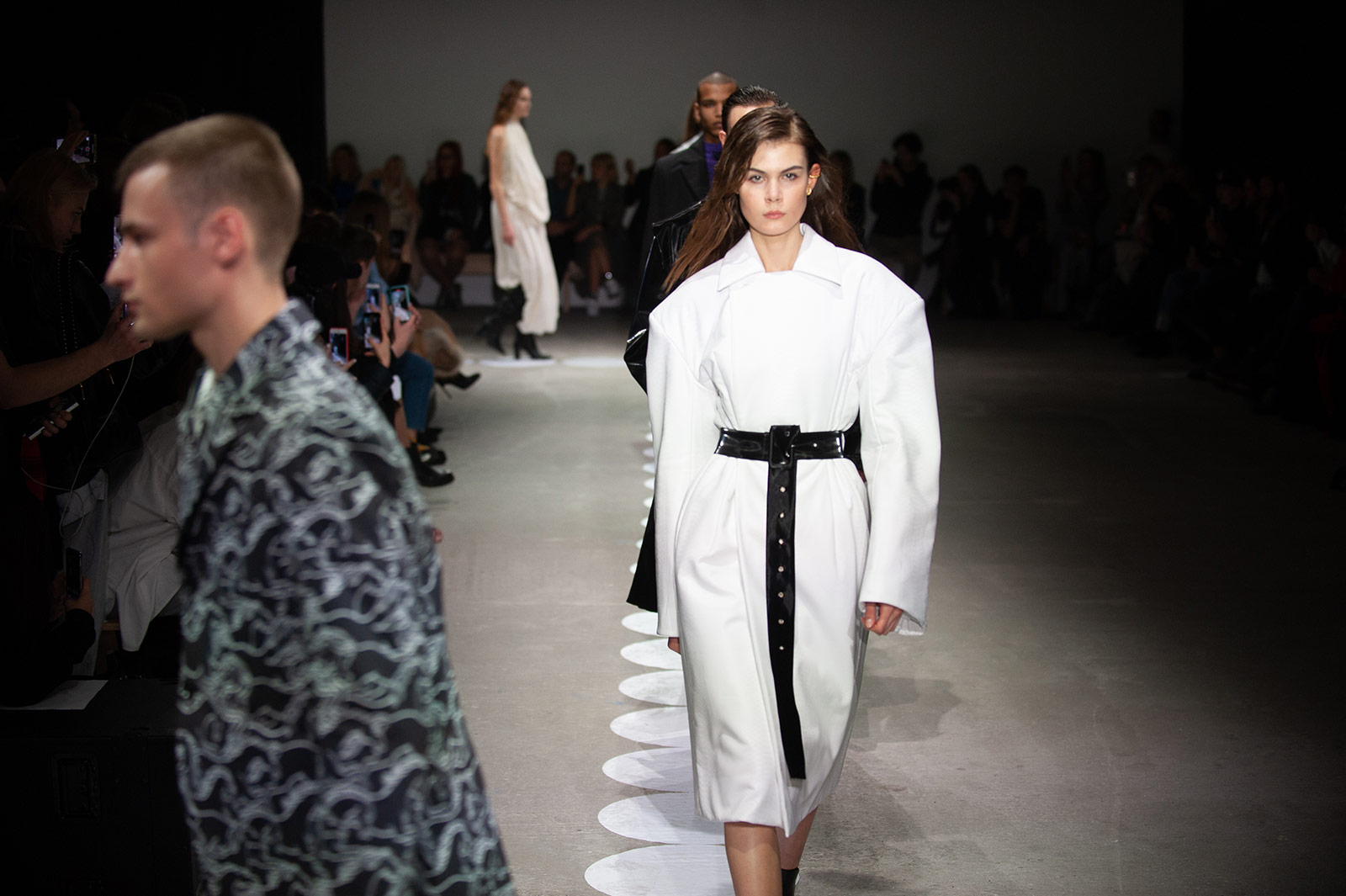 There was only one thing missing during the 46th edition of the Ukrainian Fashion Week: the snow. During one of the warmest winters Kyiv has ever seen, the city celebrated its fashion week from February 1 to 5, which is becoming a must-go event season after season.
It was beautiful seeing how fashion can dress up a city that suffered so much not that long ago. Kyiv is now far from those days where people had to fight for their rights; these efforts are now visible. Anyone visiting the city can breathe that sense of freedom and progress that its citizens achieved by demonstrating on the streets. That’s exactly what Iryna Danylevska, co-founder of the Ukranian FW, meant when she told me that, “in this country, there’s not only war, there are incredibly talented people, and I think that Ukrainian Fashion Week creates a positive and more representative image of the nowadays country.”

During four days and around thirty fashion shows, Ukrainian designers made sure everyone could see what they are capable of. With a special focus on sustainability, this year’s fashion week was a demonstration of the new and alternative production processes that are friendlier with our planet. Ukrainian designers mainly use two: on one hand, recycling materials and using new technologies to create fabrics that don’t have such a negative impact on Earth, which is something many designers around the world are embracing.

On the other hand, using artisanal, hand-made processes, as Iryna explains. “The Ukrainian industry has a very developed craftsmanship, and this is a very interesting working method in fashion because it makes it slower, therefore more sustainable, long-lasting and also exclusive and high-quality.” Today, sustainability is a big issue within the fashion industry and its future depends on it. “When it comes to sustainability, in fashion it is a do or die”, concludes Iryna.

Founded in 1997, Ukrainian Fashion Week was the first one from the Soviet area and Eastern Europe. From the very beginning, helping young designers was one of the main focuses, and that is how the Young Designers Contest was born in 2000. Years later, they wanted to do more, and so they created Fresh Fashion, another platform to help emerging designers to enter and establish themselves in the highly competitive market of high-fashion. Therefore, it is unquestionable how UFW has catapulted many Ukranian designers to international commerce and now they are presenting their collections around the world. It is the case of Kseniaschnaider, for instance, who after being in Paris, closed the second day of the UFW with an astonishing show.

This Fall/Winter 2020 season, around fifteen thousand guests fell for the more than sixty participants that showcased their talent through fashion shows, exhibitions and installations, which were mainly gathered at the Mystetskyi Arsenal venue. Four days full of fashion that we sum up for you in the following highlights. So, here are some of the best shows, designers and collections that shined on the runway.

Kseniaschanider
Recycled denim and other fabrics are their signature materials. It was incredible to see how Anton and Ksenia Schnaider breath new life into used fabrics, resulting in brand-new-looking garments. Using a colour palette combining earth tones with the characteristic blue denim hues, Ksenia and Anton Shcnaider presented a collection that perfectly mixed nowadays street style with some more formal and elegant shapes. Overall, they presented a wide range of comfy garments that oozed style and modernity. From their already-famous asymmetric jeans to some colourful patchwork jackets and sweaters, to pure colours on clean lines which yet eluded simplicity.
The styling wasn’t seeking excess but it had something to say. With subtle subliminal messages like the fluor tags on shoes and boots, Kseniaschnaider made a social statement on the price we give to objects and people, and their real value. As the icing on the cake, an amazing white gown – designed at the very last minute, as the designers told me backstage – shut down the runway. 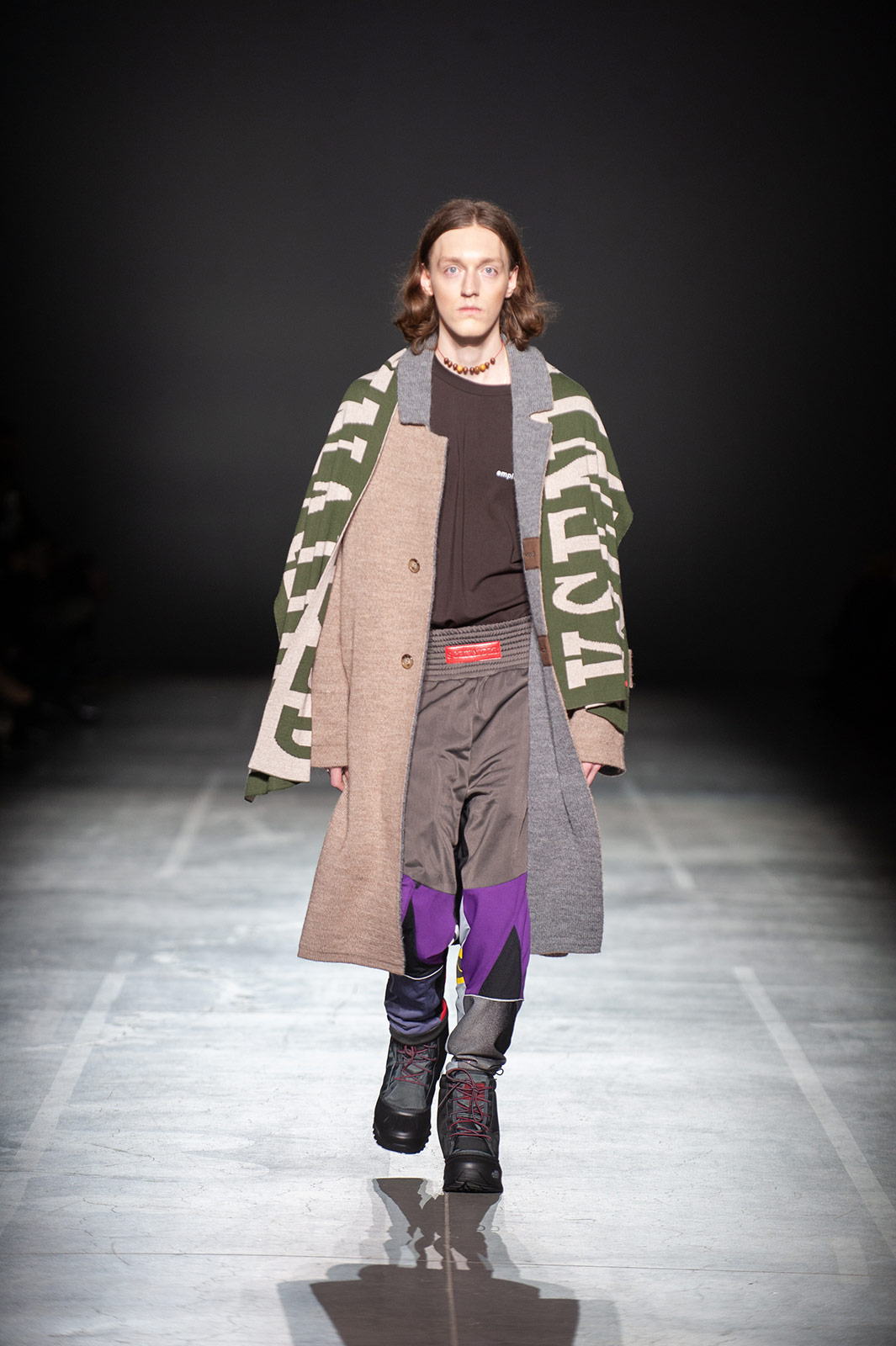 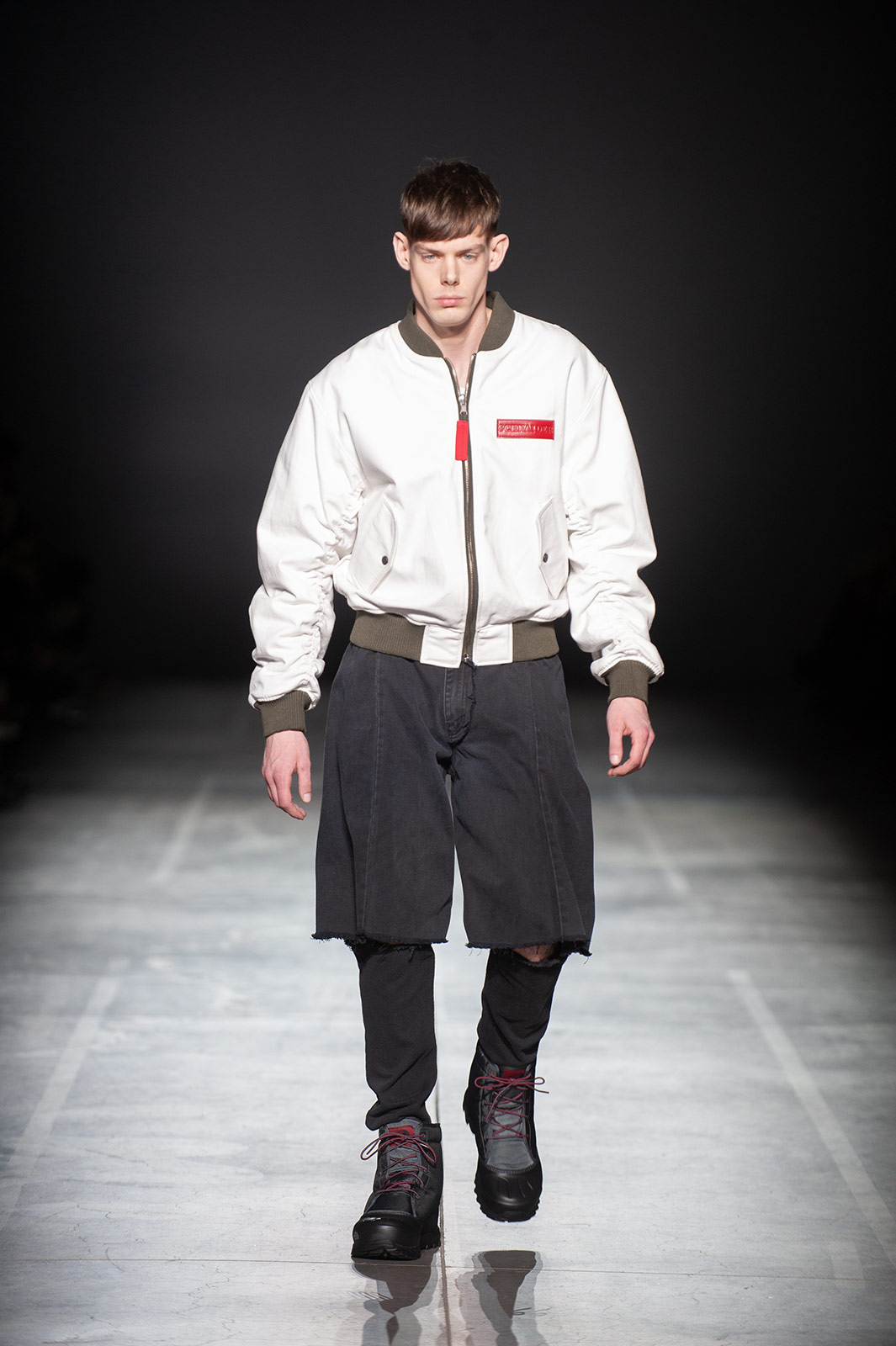 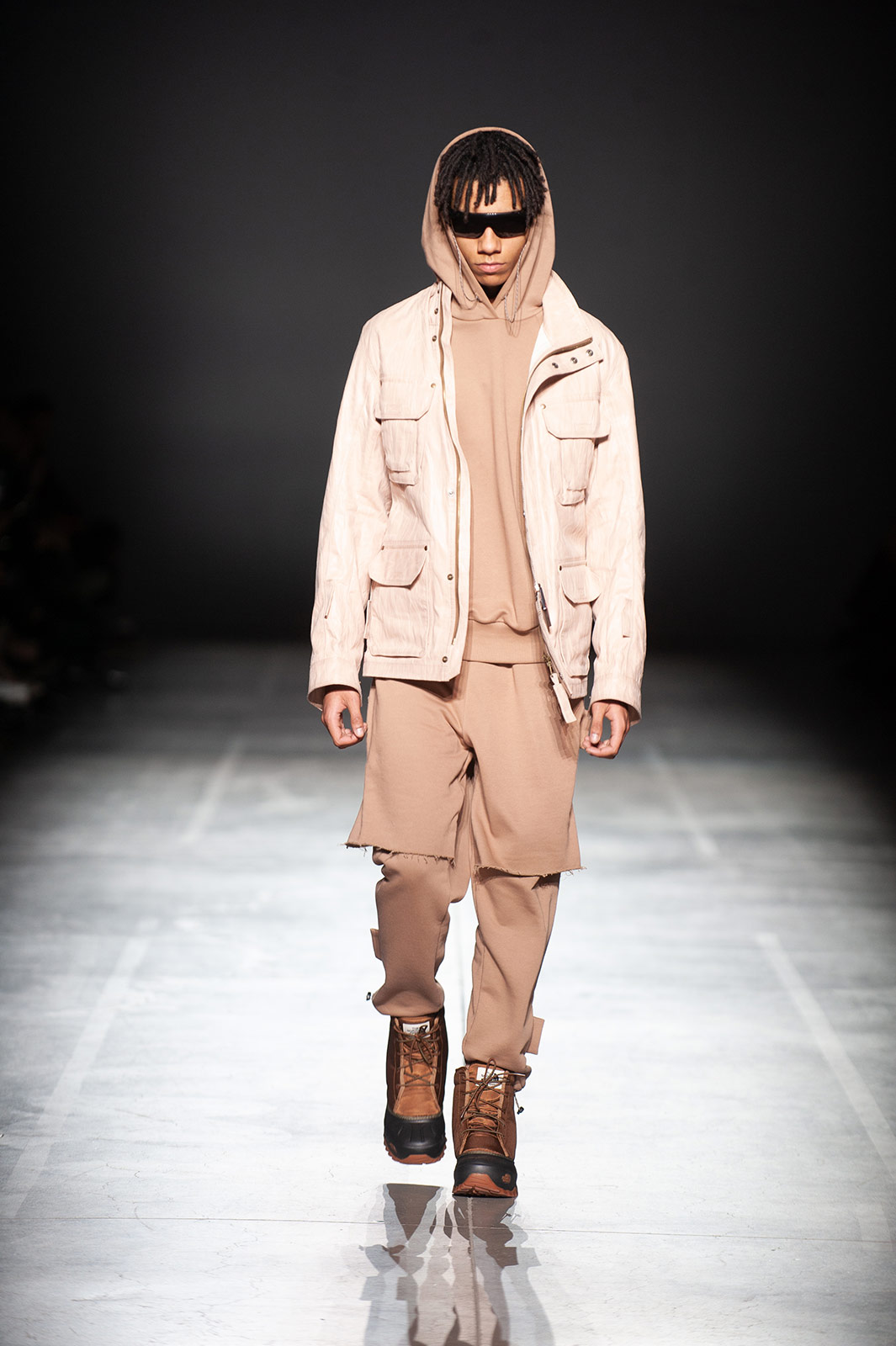 Gudu
A quick walk through the backstage before the show and you’re already mesmerised by the styling of Gudu’s Fall/Winter 2020 collection. Always covering the models’ faces with a different mask season after season, Gudu creates out-of-this-world creatures that slay the runway. Truth be told, it isn’t an easy task to strut the runway barely seeing your next step… but the audience loves it. Under flashing lights and to techno beats, the models showed a collection characterized by vivid colours like electric blue, green, red and yellow, shiny materials like faux leather and latex, asymmetrical silhouettes (like pleated skirts), quilted outerwear, silk appliqués and deconstructed garments that revealed under-layers. 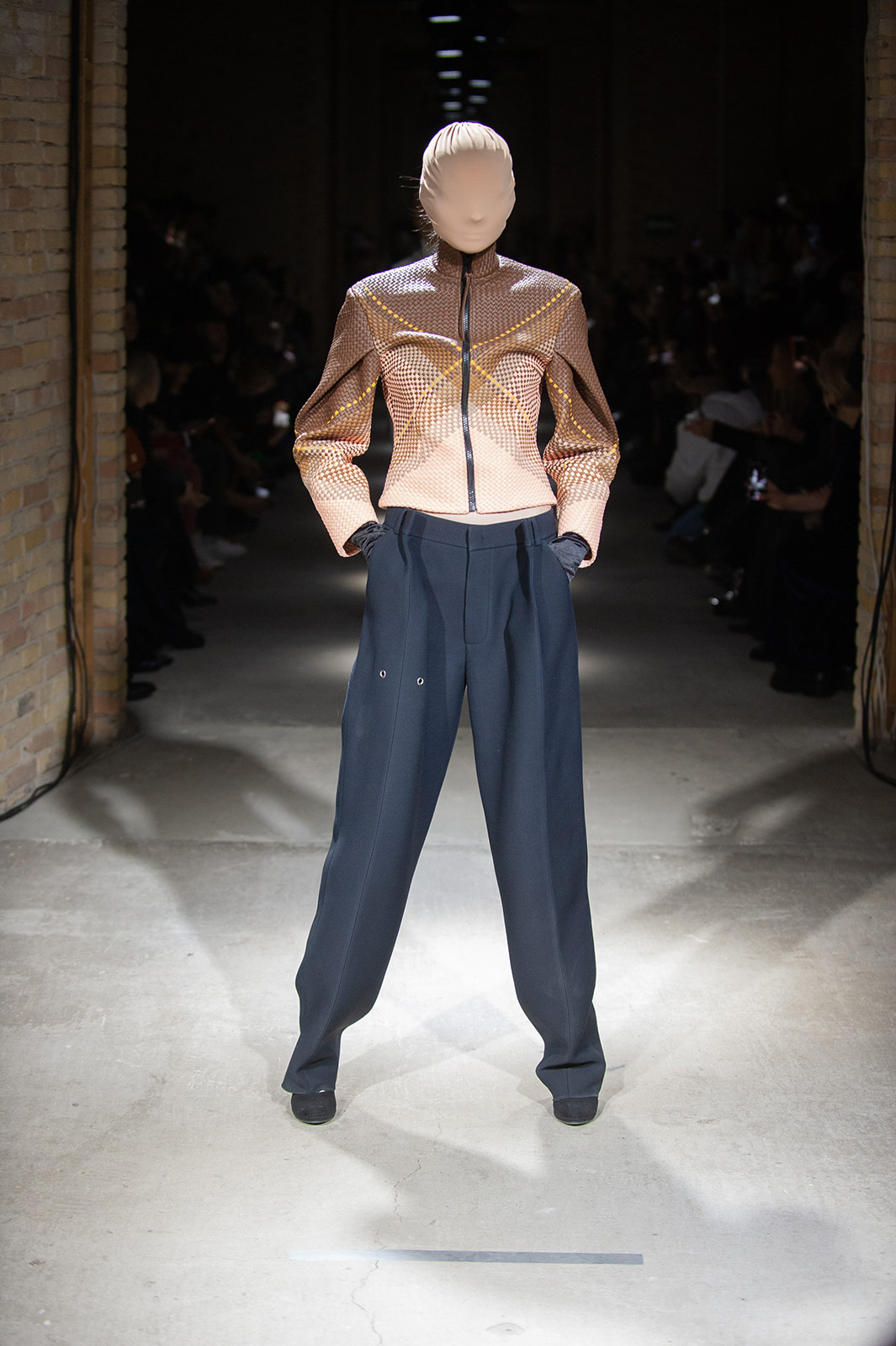 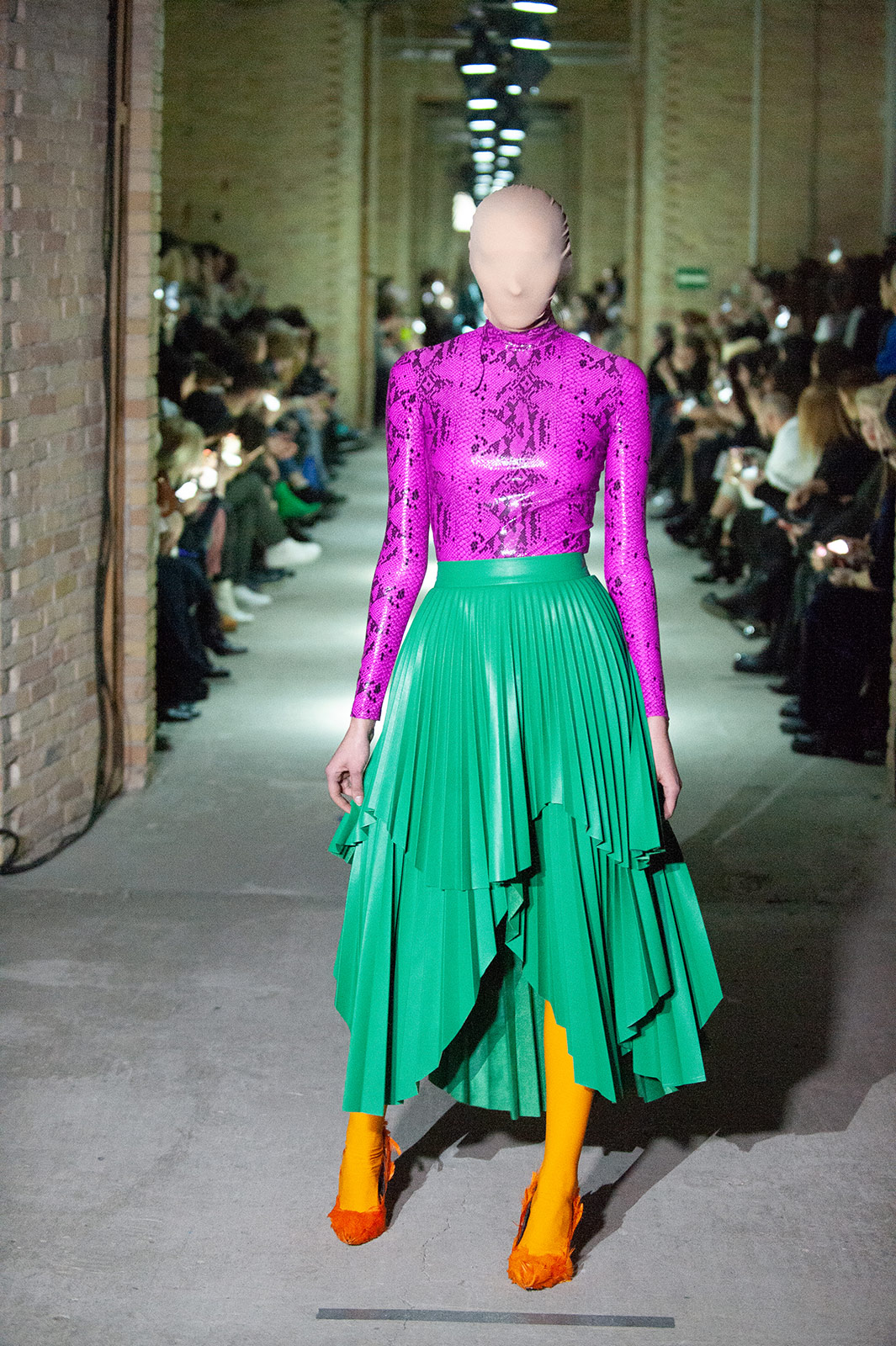 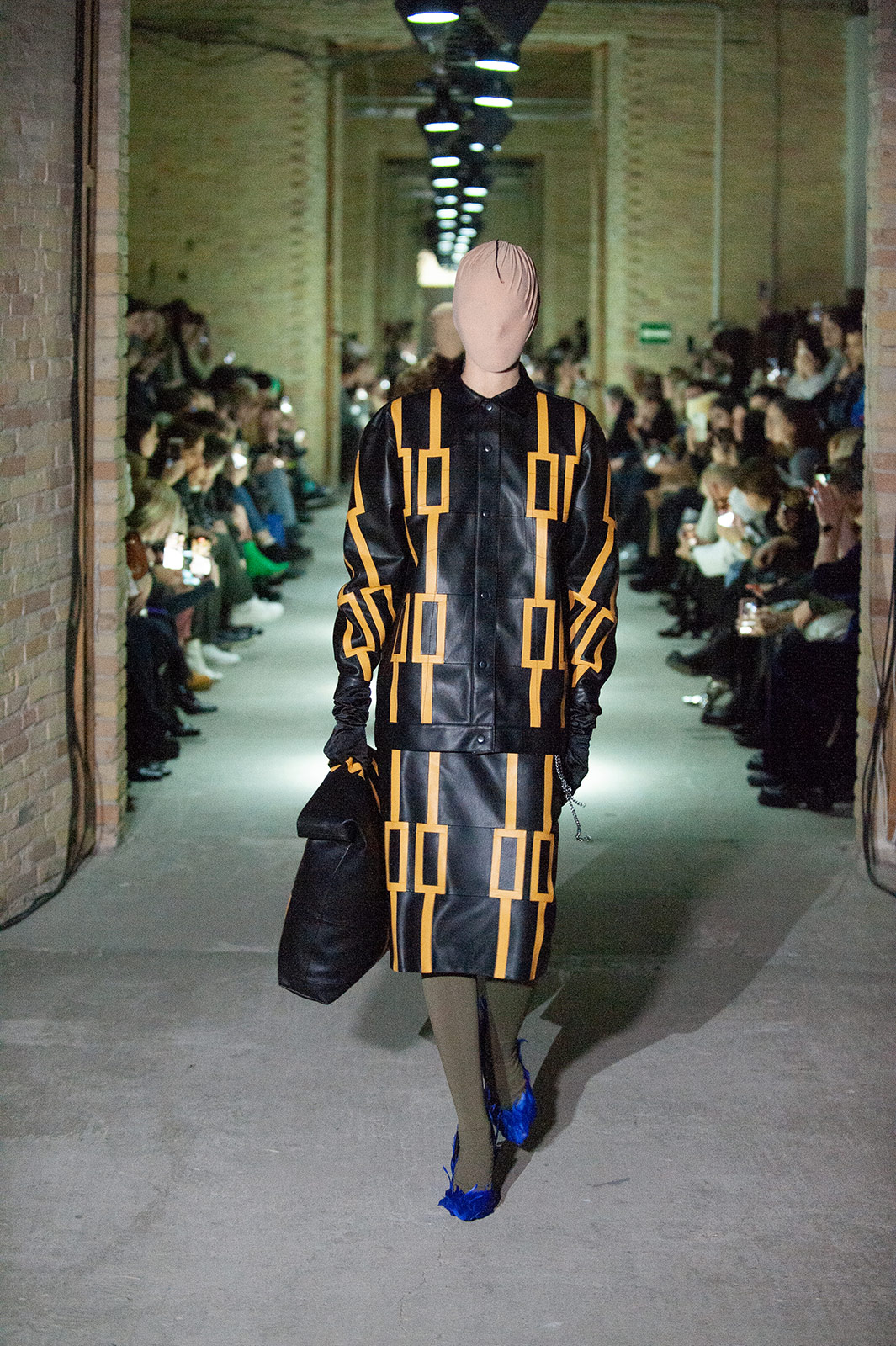 Elena Burenina
Elena Burenina presented Cloud Dancer, an ode to the fragility of dreamers who, because of their desire, sometimes need special protection, but whom, at the same time, are brave enough to keep pursuing their goals. As Burenina says, “dreams are wings to our freedom and that is why this collection is about the synergy between strength and vulnerability”. Her words are translated into a collection that stands out for contrasts in the colour palette (black and dark tones against white), in the fabrics (leather with silk), rigid materials covering garments made of soft fabrics like cashmere… It was all about sensual sophistication embodied by beautiful big coats and trench coats, wide-leg pants, oversized suits and long dresses. And maybe those wings Elena was talking about were represented by the movement of the garments and fabrics. The apparel elegantly swung with every step, this time creating a synergy between equals, not contrasts, because the collection became an armour for dreamers on the catwalk. 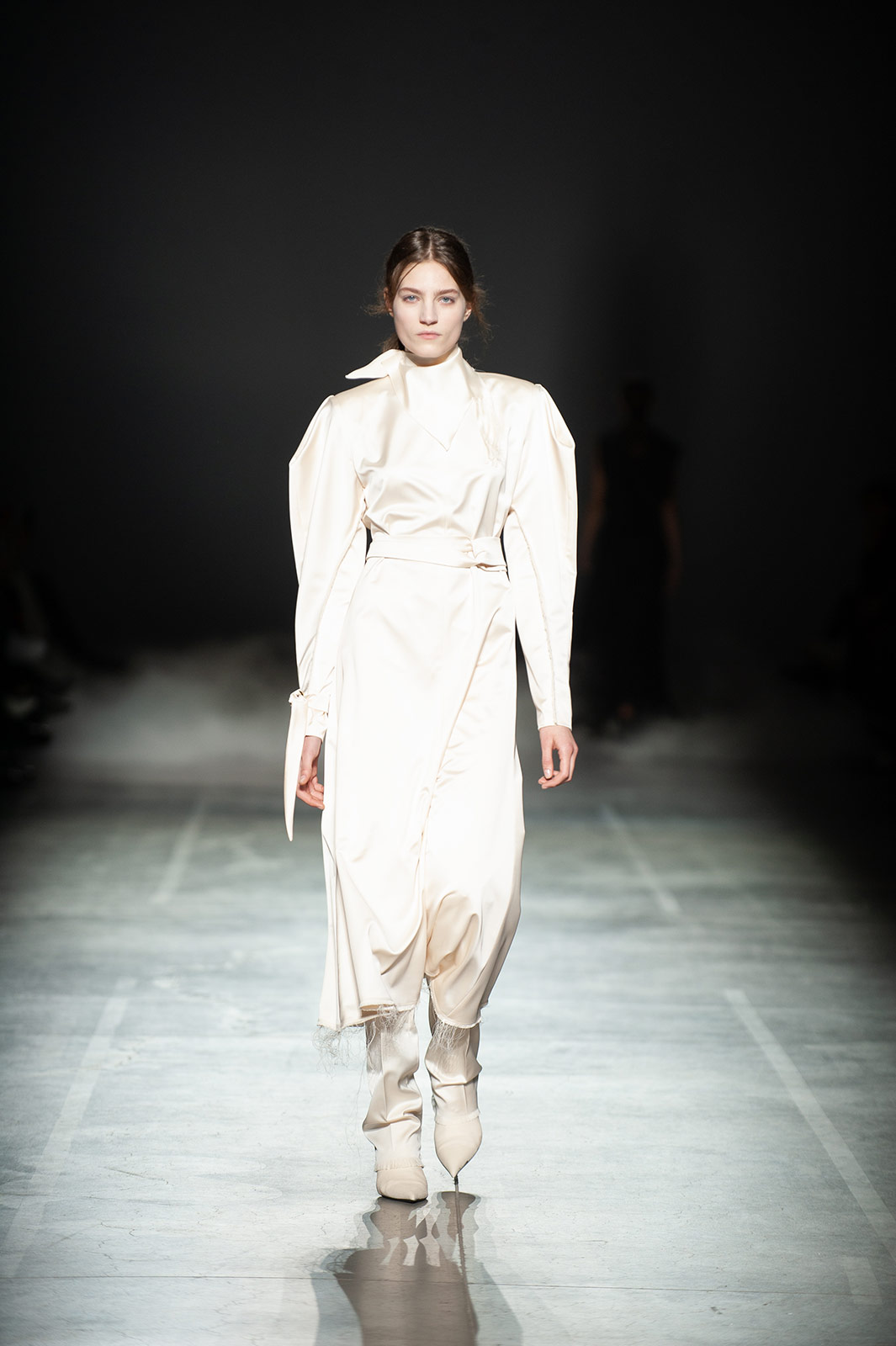 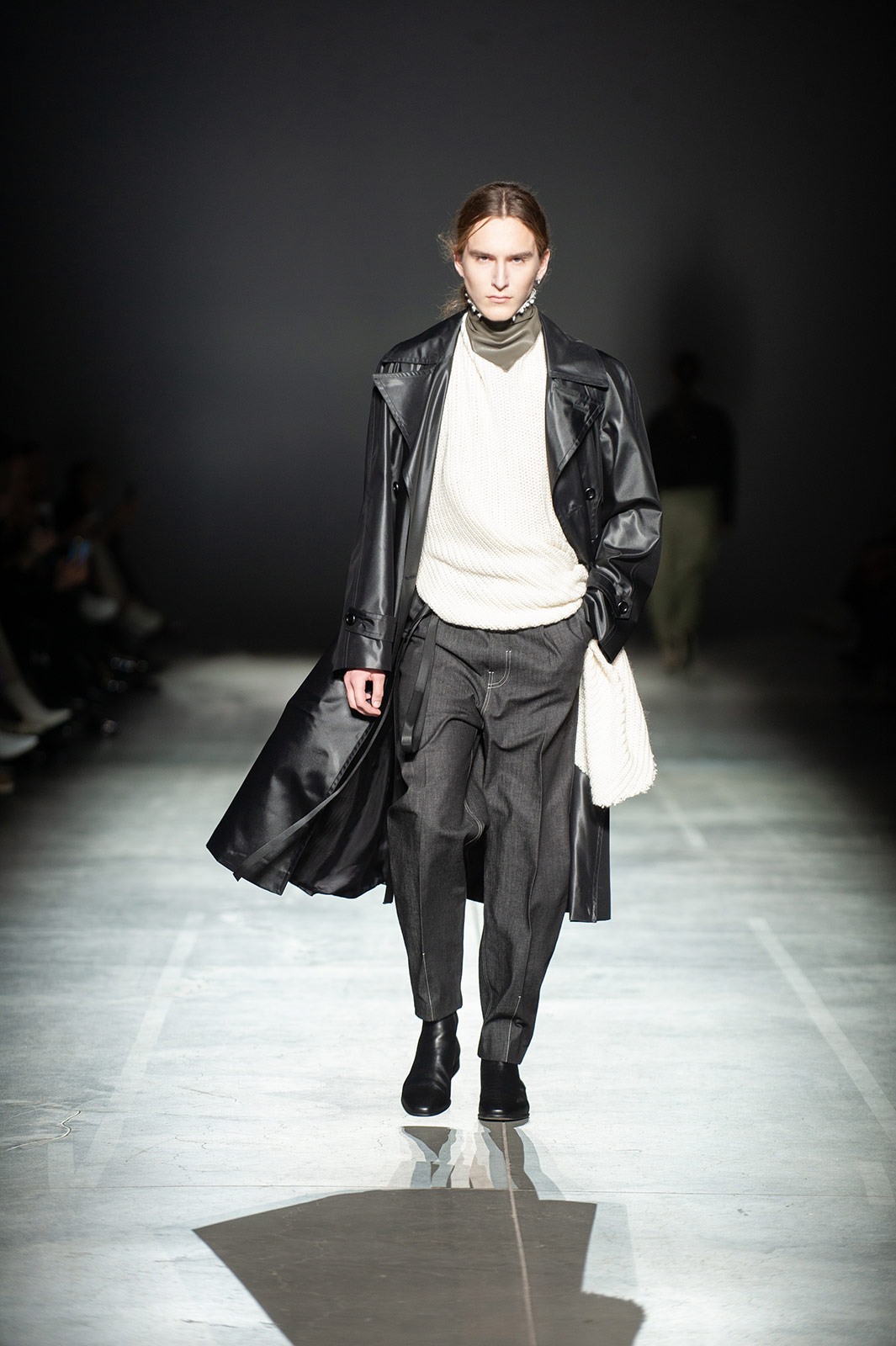 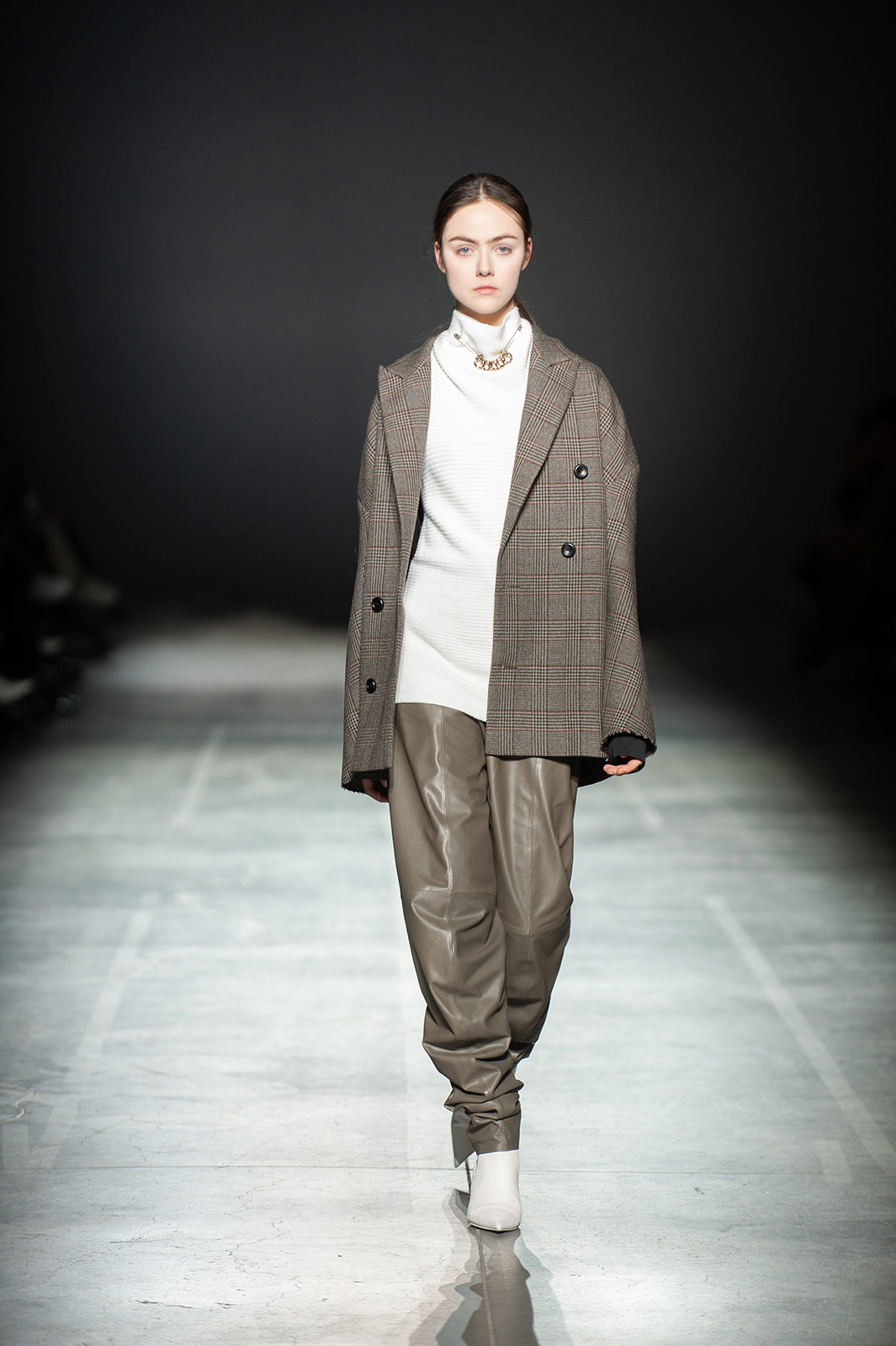 Theo
Zero Boundries. Pure Energy isn’t only the name of Theo’s Fall/Winter 2020 collection but also the vibe conveyed in the show. Teo Dekan presented a collection full of oversized as well as fitted silhouettes, voluminous shoulders and contrasting prints and textures that went beyond genders. Eco-leather on textile lining, paper raincoat fabric, knitted hand-made mohair, washed denim, textured satin, vinyl, printed crepe-de-chine and mixed wool were the completed variation of fabrics used in the collection, all in mainly black and cream colours but also including hues of purple, turquoise and lime green. The collection was the result of many different elements – like running horses, neural networks prints, sequins or tailoring –, which all together created a beautiful and delicate combination. 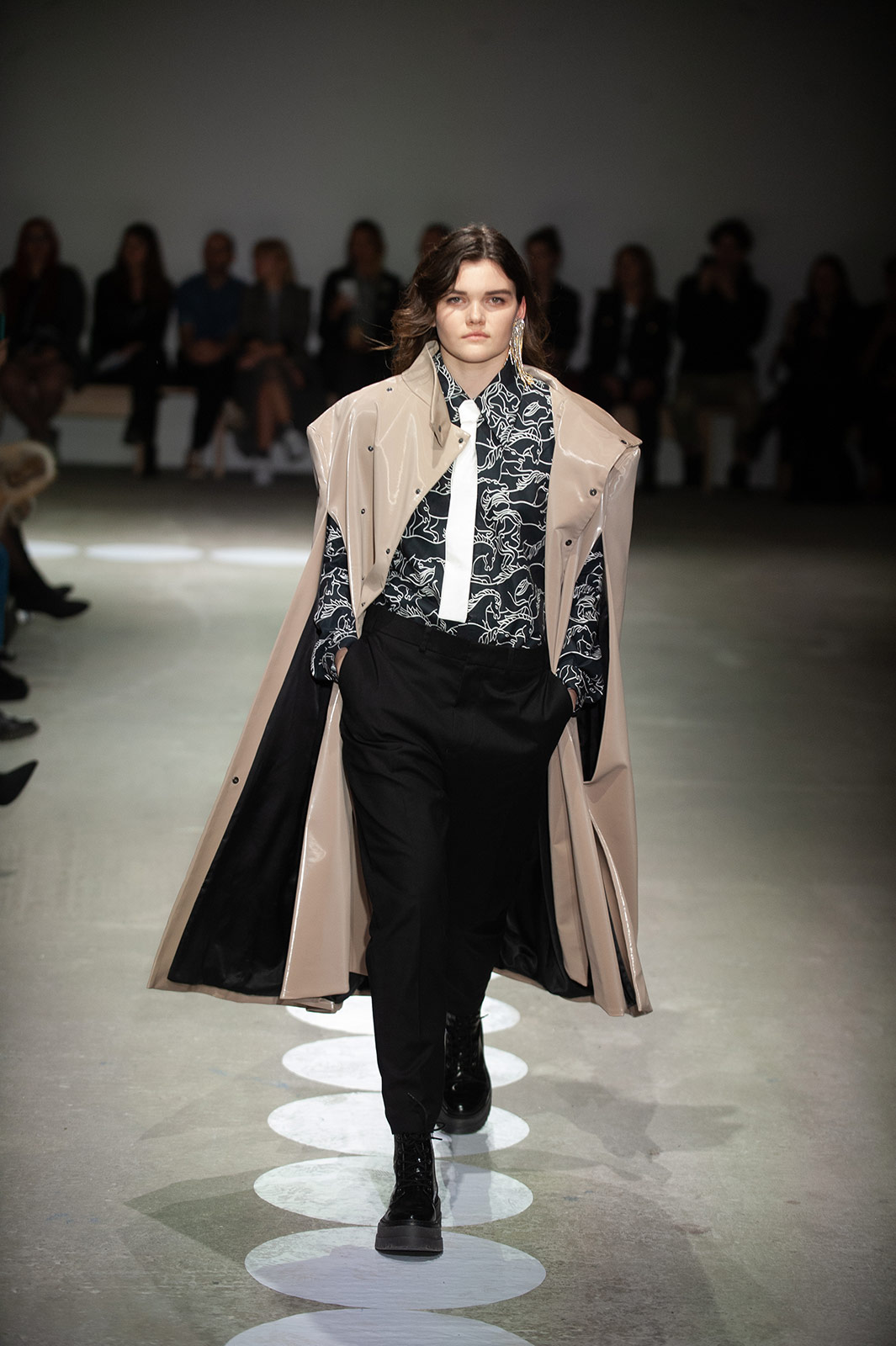 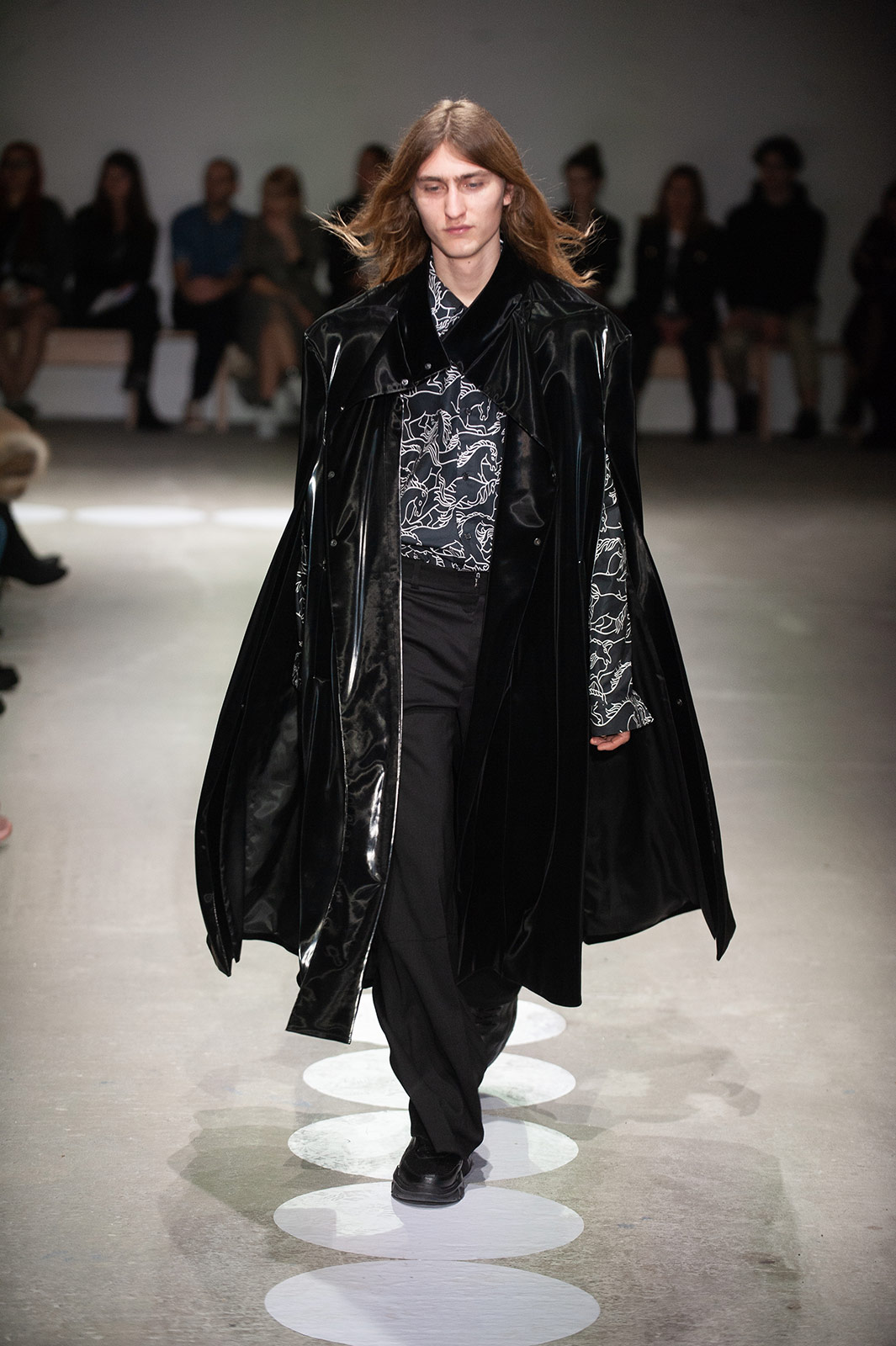 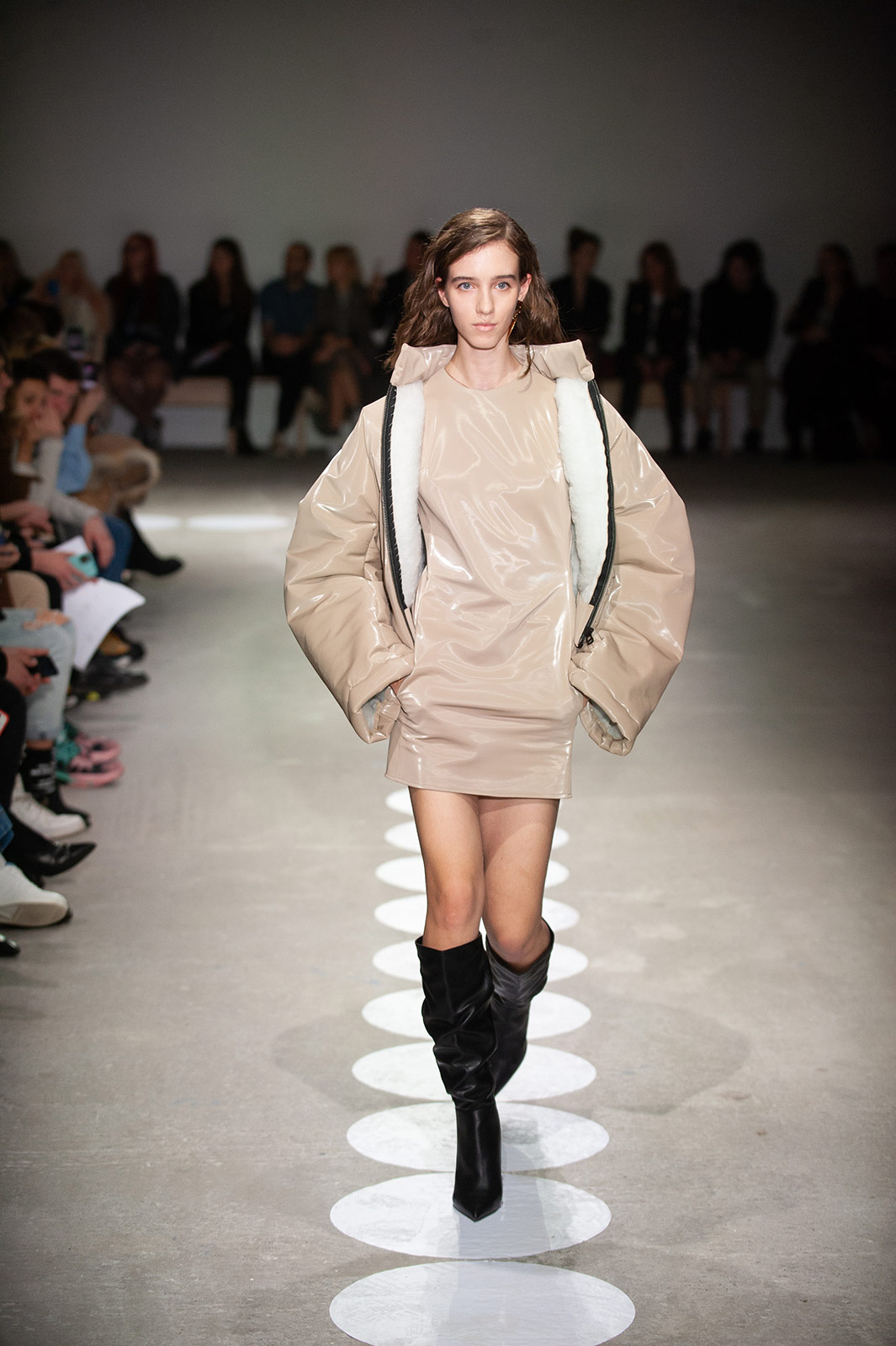 Przhonskaya
Probably the most different and inventive show presentation, starring two twin dancers with long blond braids and matching outfits – long coats in checkered print and shirts in brown and blue tones. But they weren’t the only crucial elements of the storytelling. From a big red coat hanging on a mannequin at the very beginning of the runway to a line of crystal chairs where models sat after walking, all the elements were being integrated and making sense as the show unravelled. It was an artistic presentation of oversized garments under a clear and clean colour palette, in which reversible apparel and soft materials were the common thread. Certainly, elegance resides in the beauty of simplicity when it comes to Przhonskaya’s style. 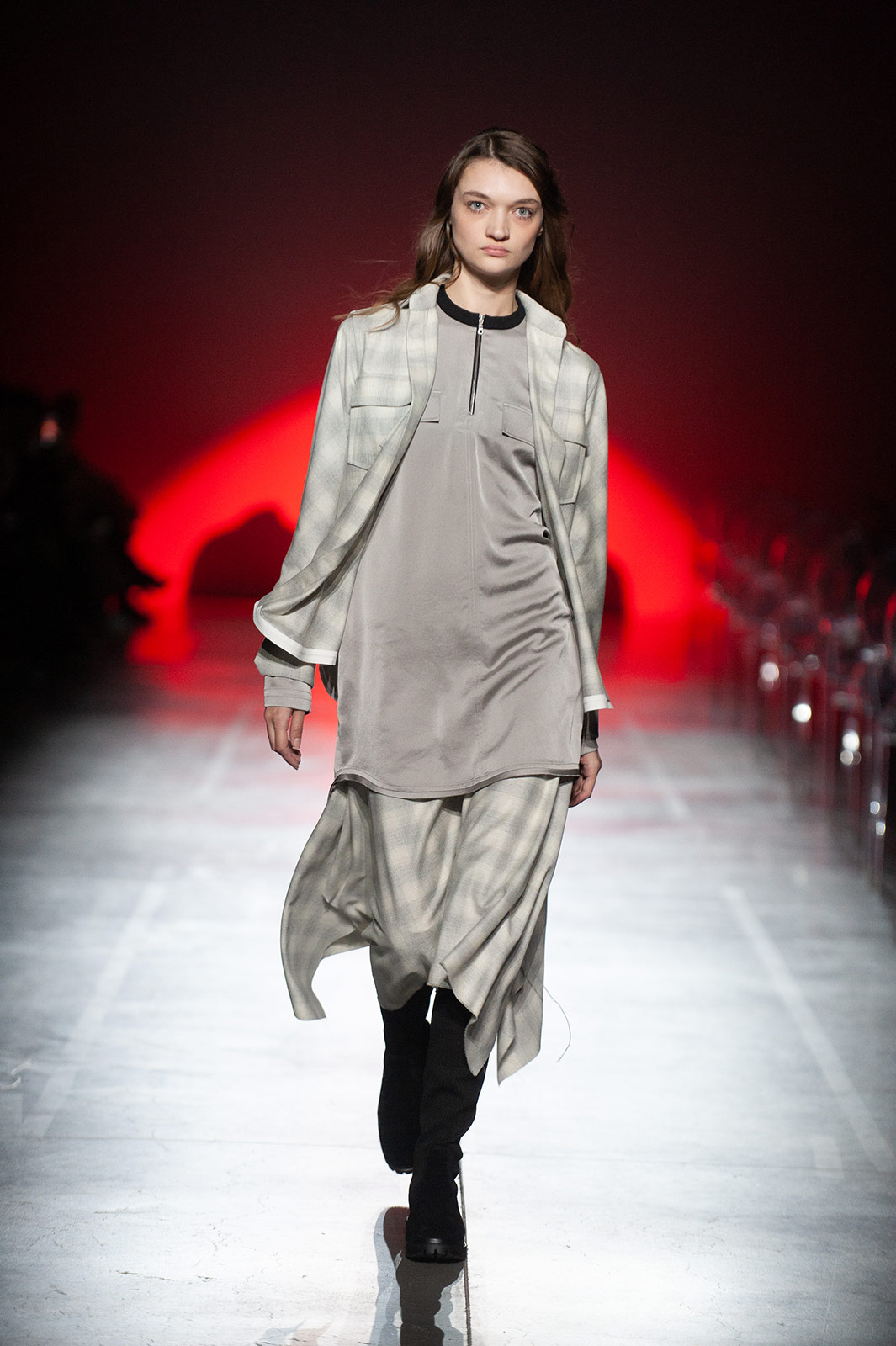 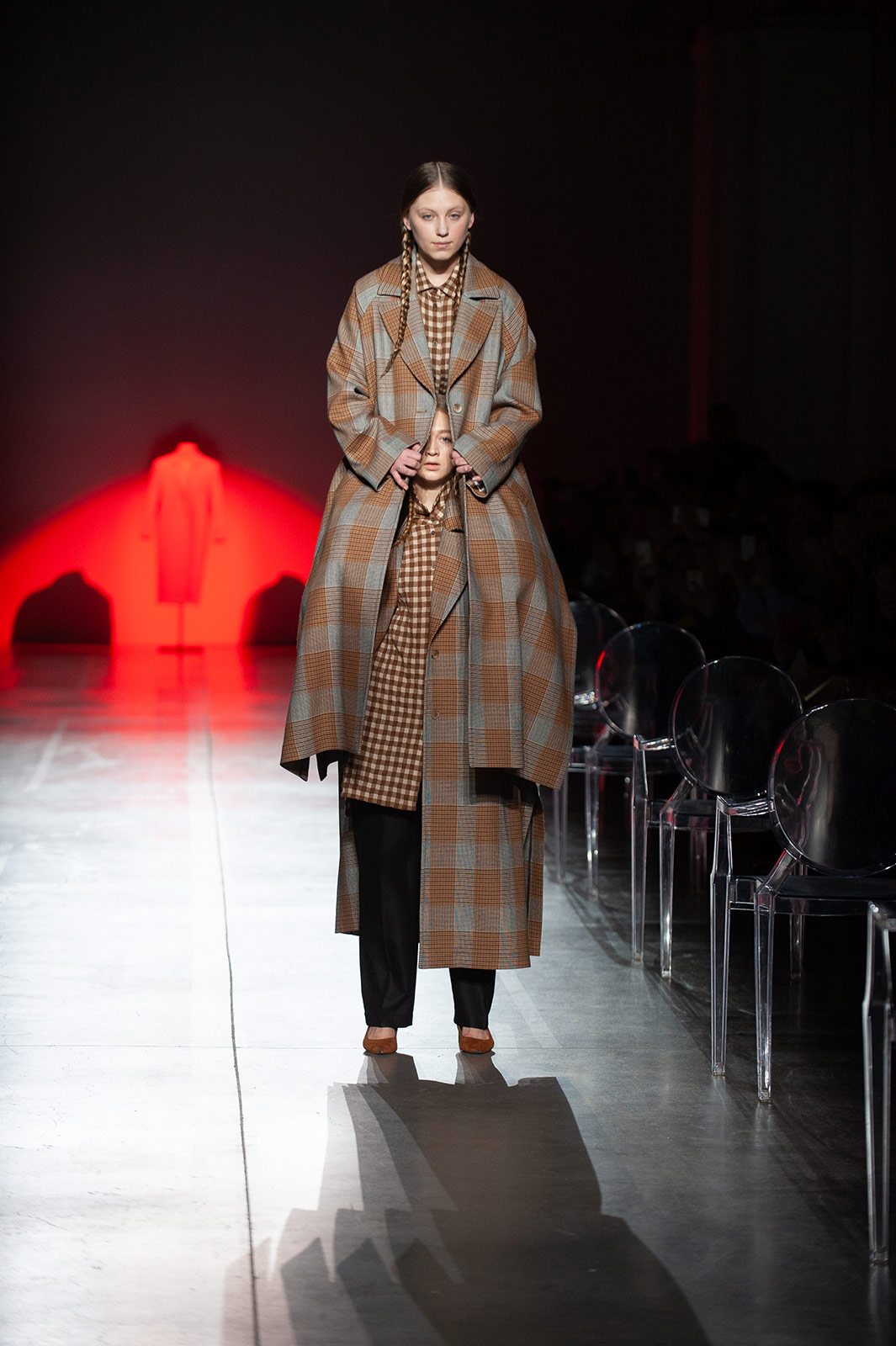 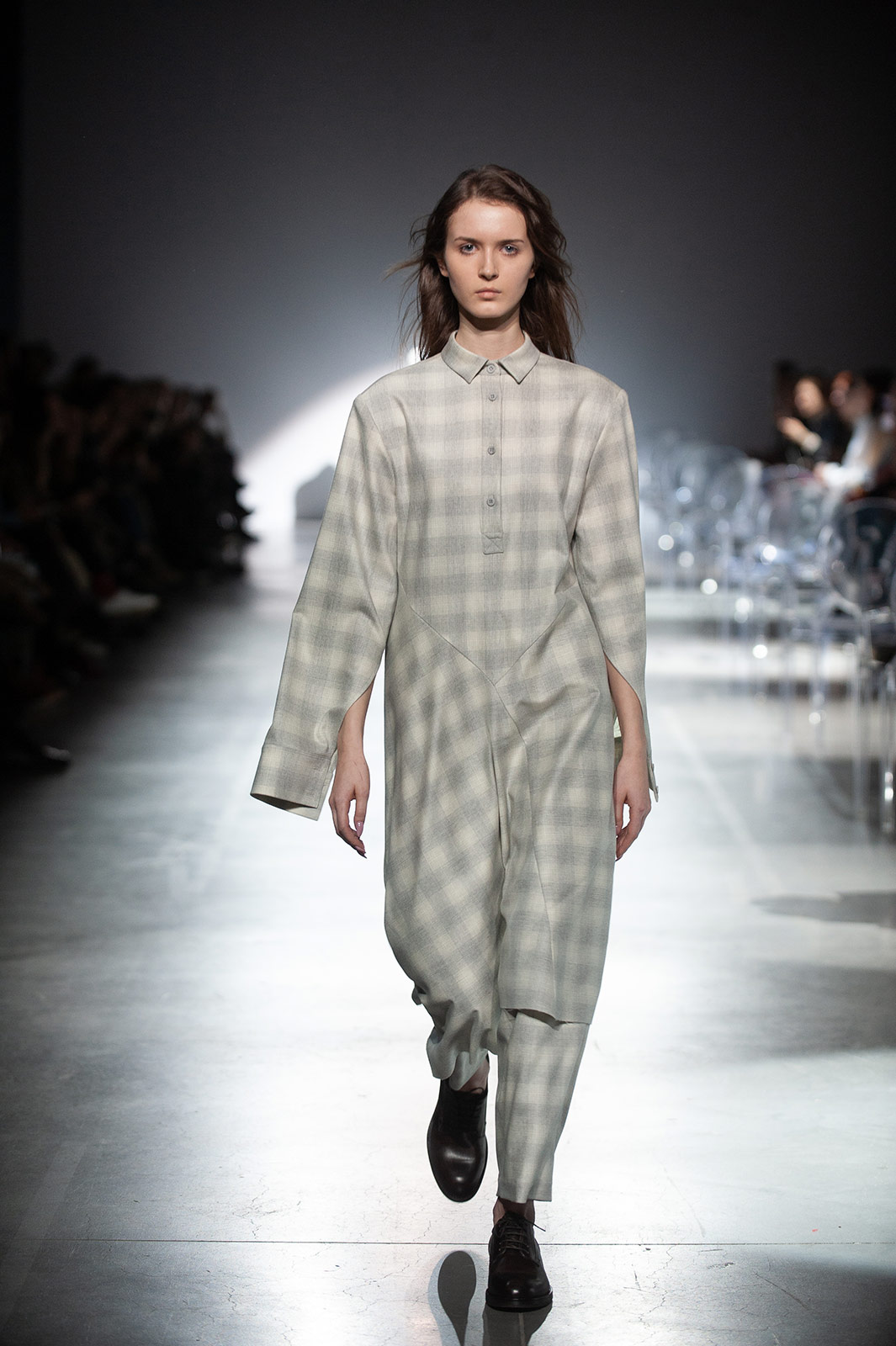 Lake Studio
Opening the second day of Ukrainian Fashion Week, Lake Studio invited us to the beautiful venue of Ukrainian House, the International Convention Center, to present its Fall/Winter 2020 collection, Sacro Bosco. The collection takes inspiration from the story of love and loss of the Italian Duke Orsini, who ordered the construction of a beautiful garden for his wife but she died before it was finished. With a round catwalk and stained glass windows as the backdrop, the classical music set the rhythm of a show that presented Renaissance silhouettes visible in the shoulder cuts, corsets and fitted shapes in contrast with voluminous sleeves. Anastasia Riabokon and Olesya Kononova – Lake Studio’s designers – used velvet and jacquard, experimented with knit and wild silk, and included textures of wool, lavender viscose and lace to shape this collection. The ferns and physalis blossoming in the prints alongside with the ivy and paradise apples were the culmination of the delicate and romantic recreation of Sacro Bosco’s garden. 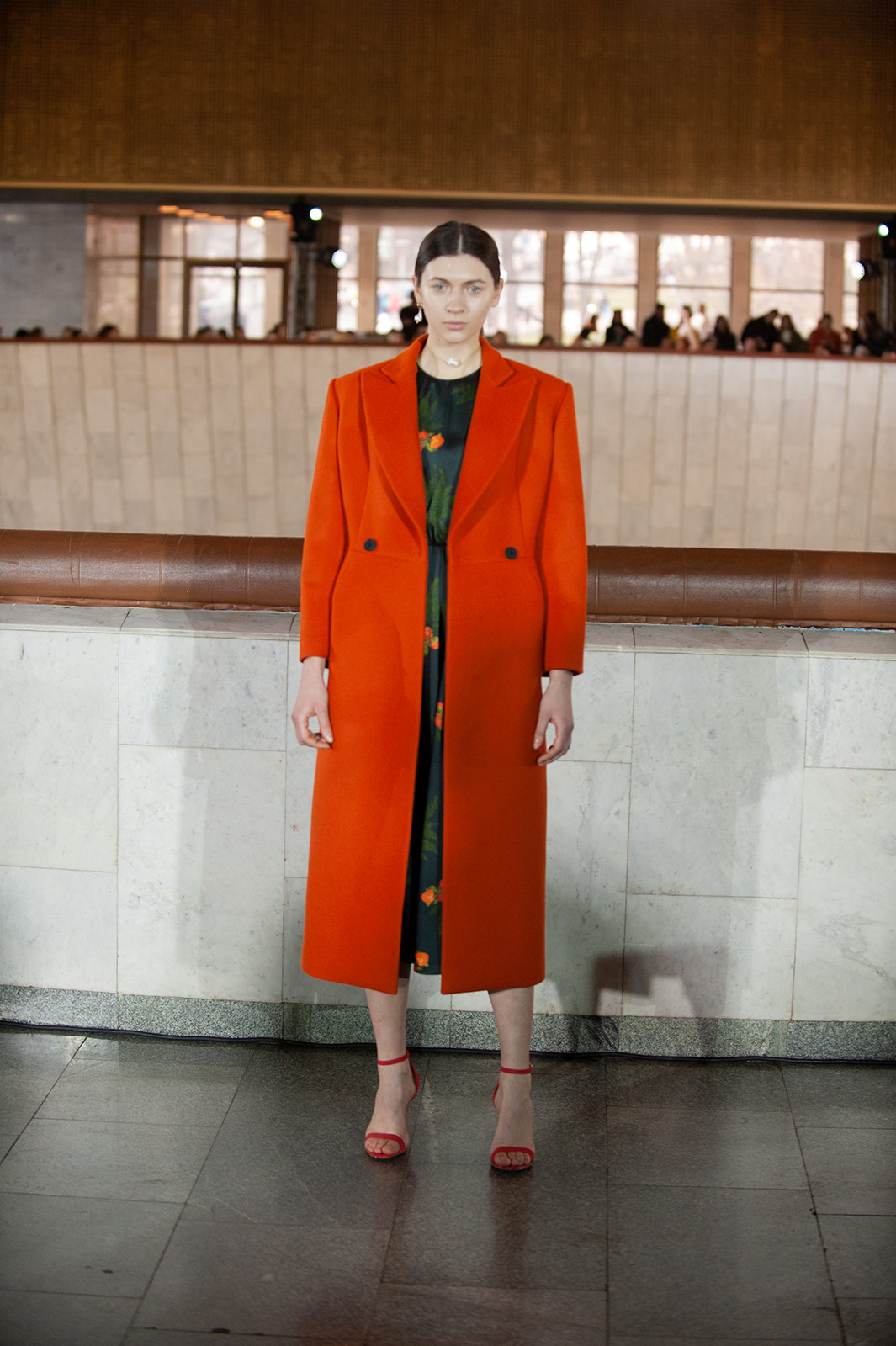 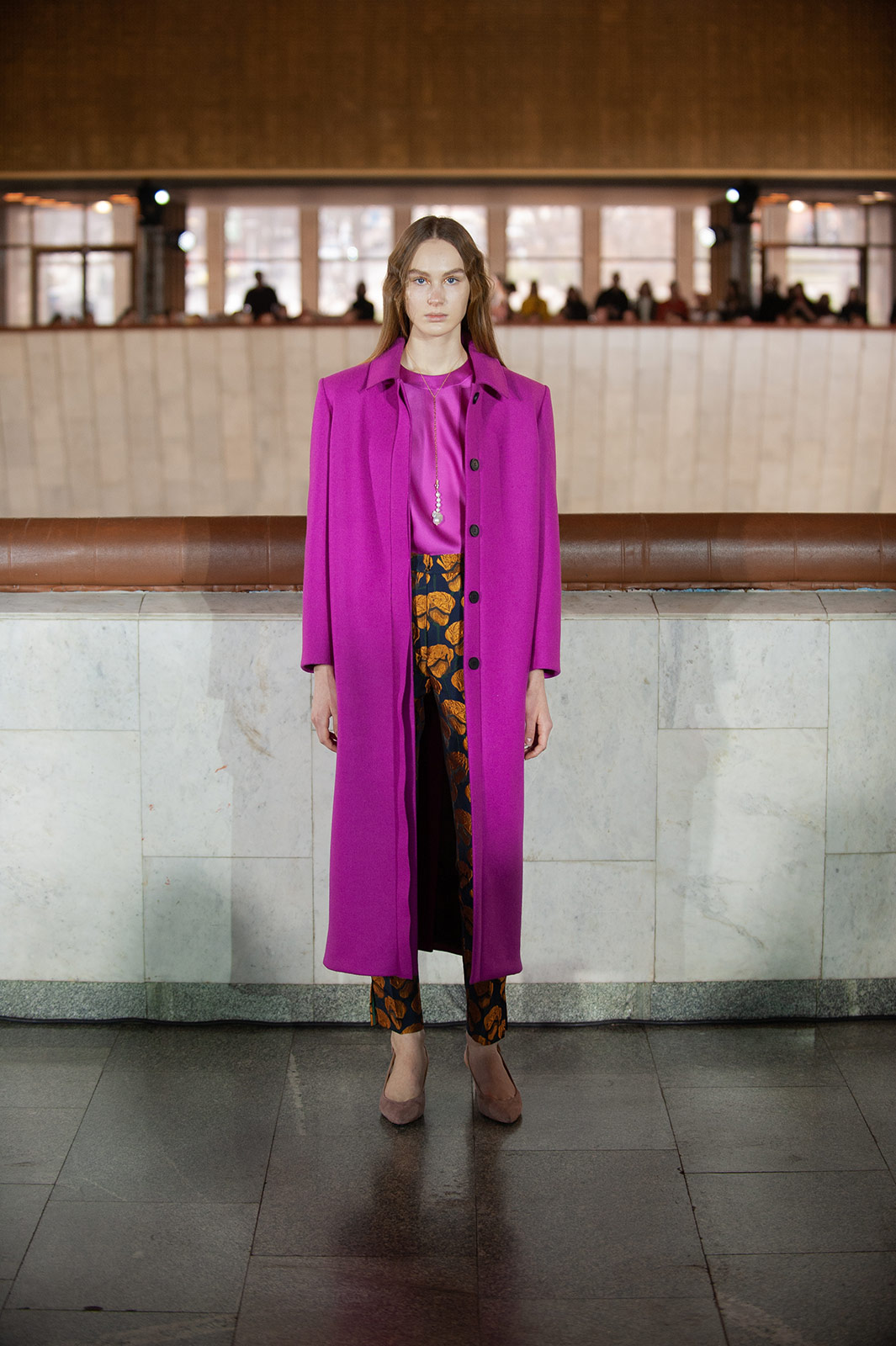 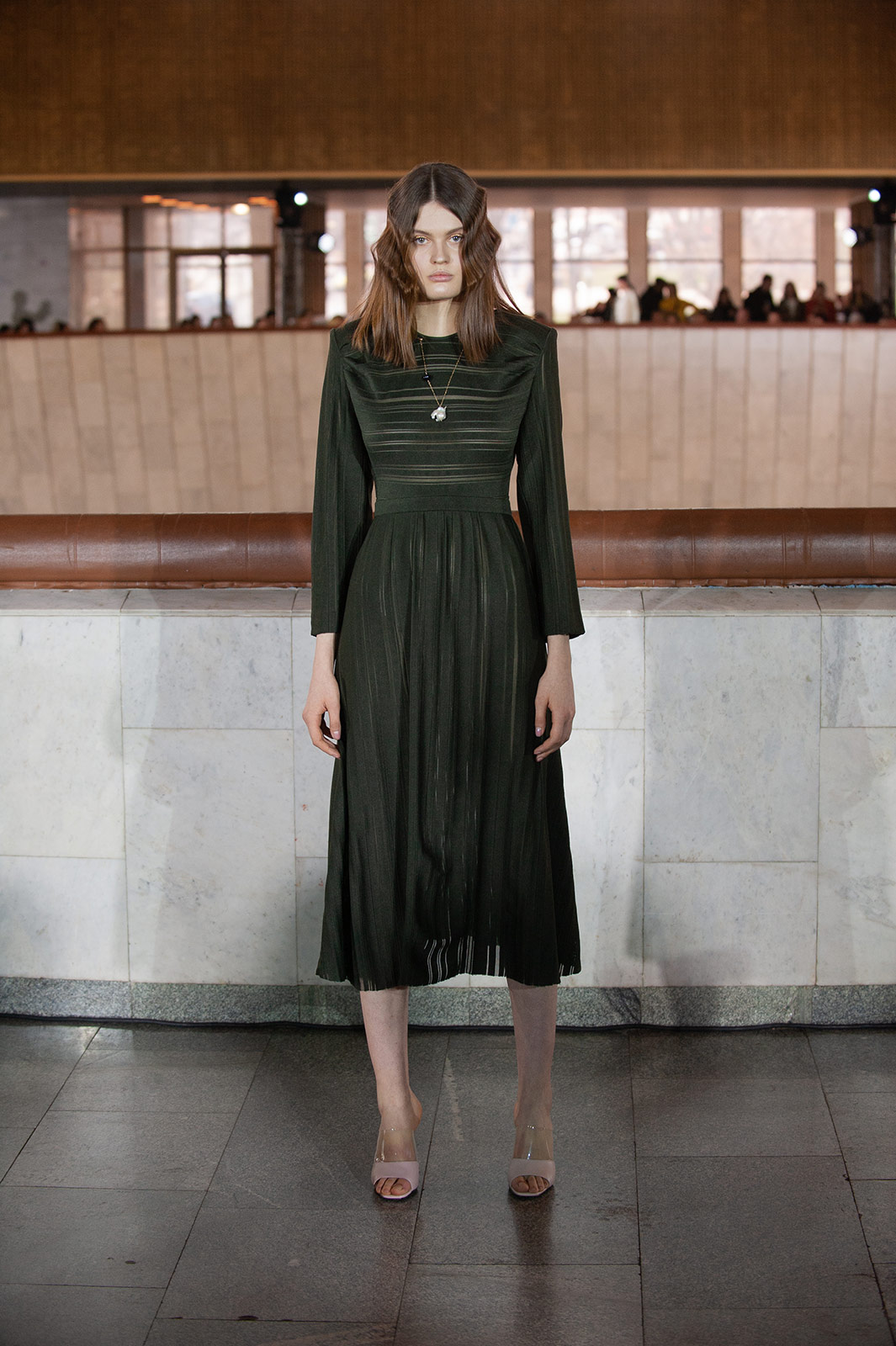 Kass
Bogdan Kass made quite a remarkable presentation with one of the few menswear collections of the fashion week. The collection is inspired by the aesthetic of Indian tribes who, despite mass eradication, did not succumb and remained true to the original source of their culture and traditions. With tribal and animal-like makeup and hair, the styling was the big highlight of the show. The dark colour palette, including woody and earth tones, set the tone for a collection that presented a rupture from traditional cuts. The designer experimented with an endless range of different materials and shapes, ranging from double-breasted blazers to crop-tops and sweaters. 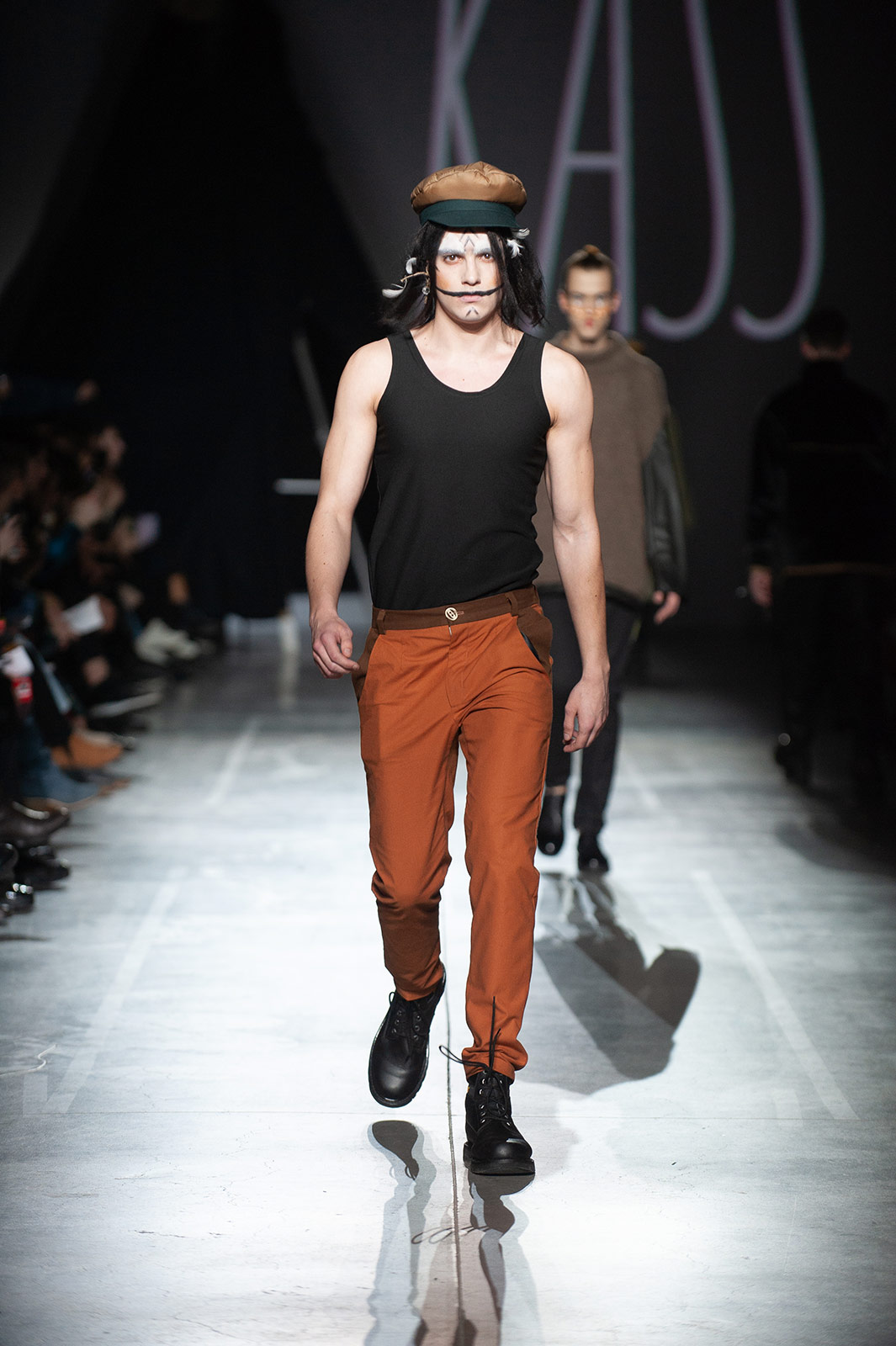 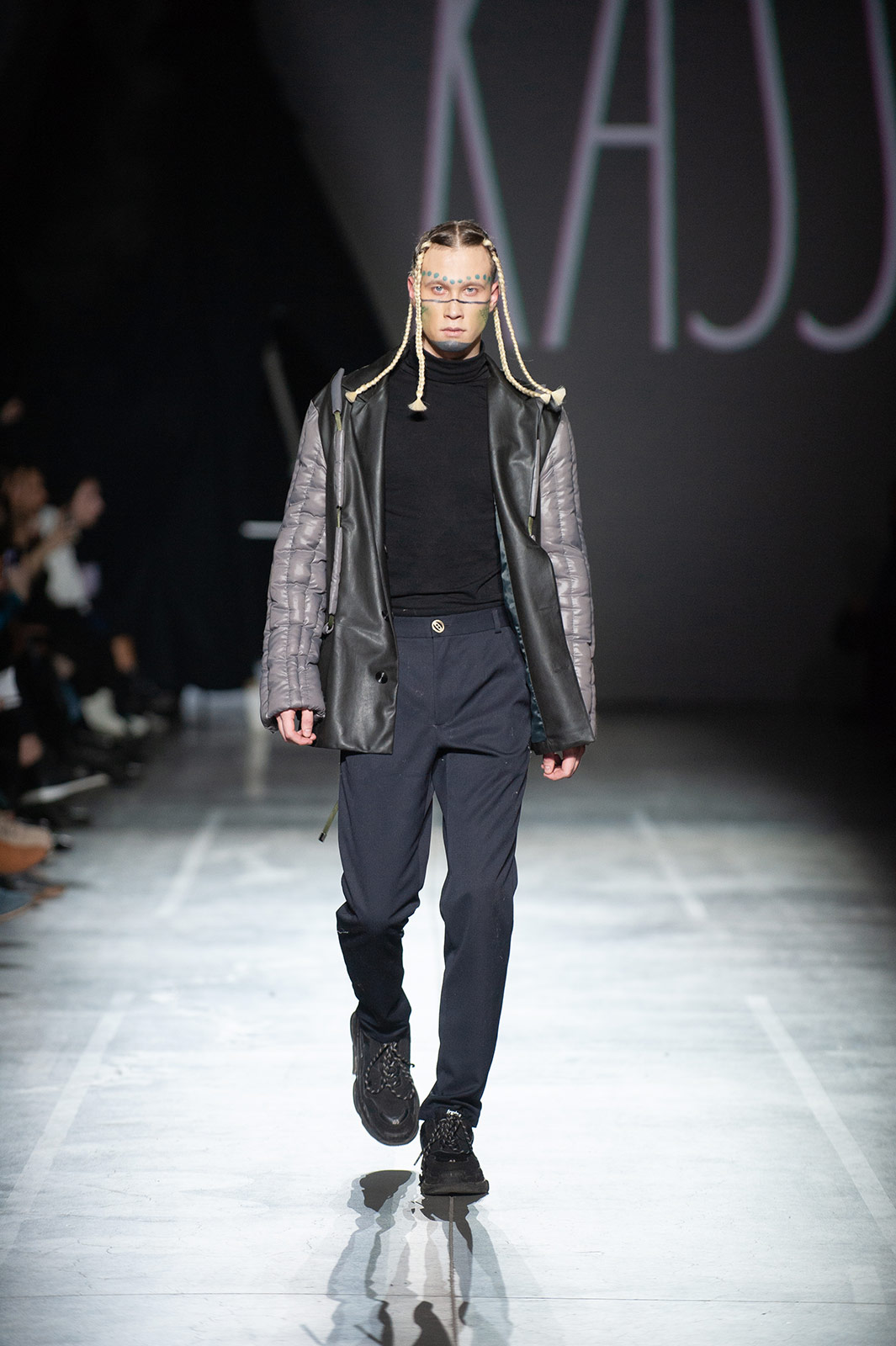 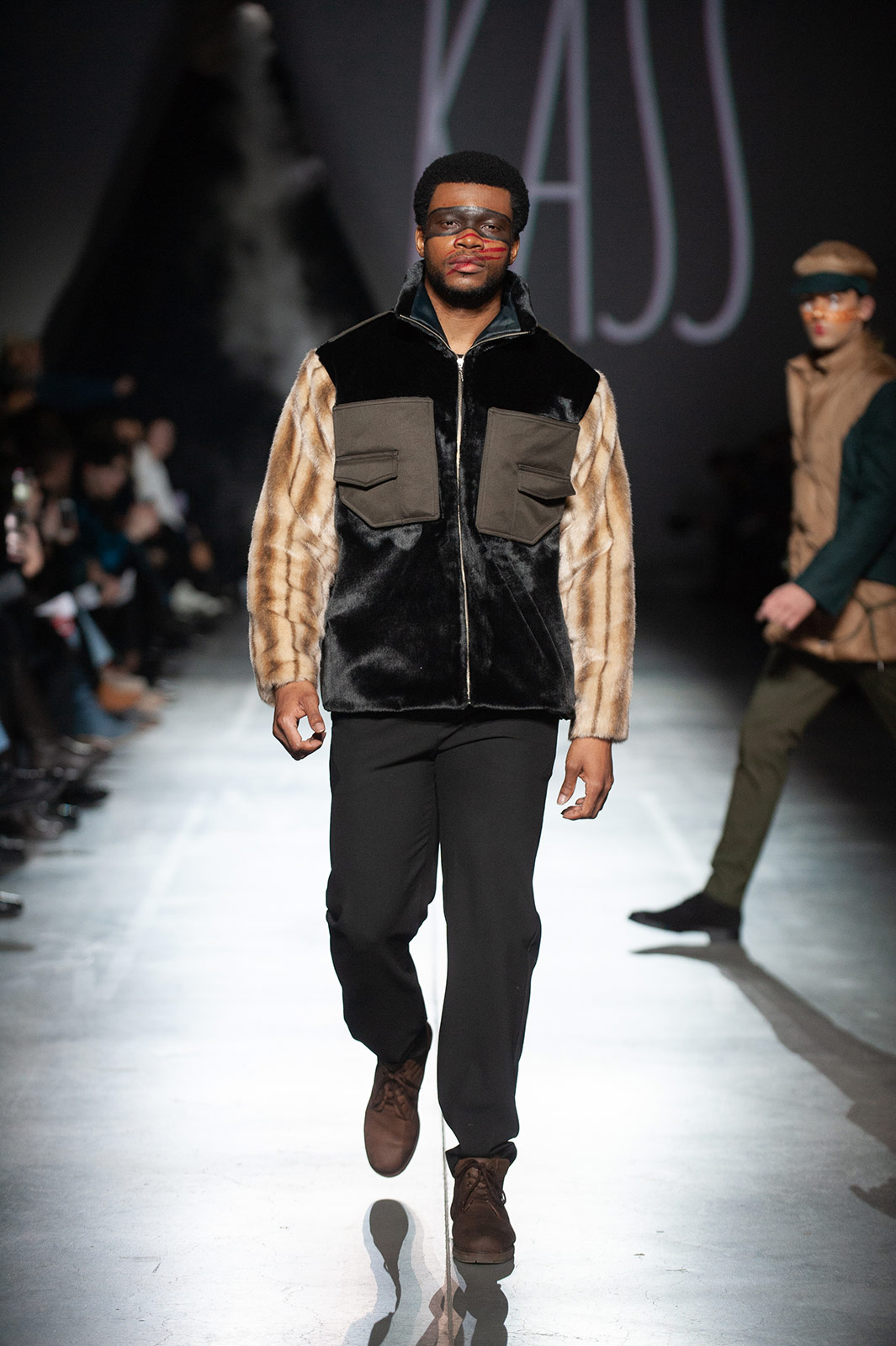 Dzhus
Avant-garde yet utilitarian, Dzhus is a vegetarian-friendly brand whose clothing is ethically manufactured using cruelty-free materials. The presentation of the Misconcept collection was a bit odd but interesting. Making a social statement against fast-fashion, ‘must-have’ clothing style and overconsumption, Irina Dzhus invited us to see the show from an open backstage where we were able to witness the finishing touches of each look – before the model stepped onto the catwalk – and how the Dzhus team applied the garment transformations. Wait, what transformations? Well, let’s say that Dzhus knows how to convert an oversize shopper bag into a skirt, some suspender shorts into a square tote or an archetypical white shirt – being the signature piece of the collection – into a handbag, once folded in a classical manner. 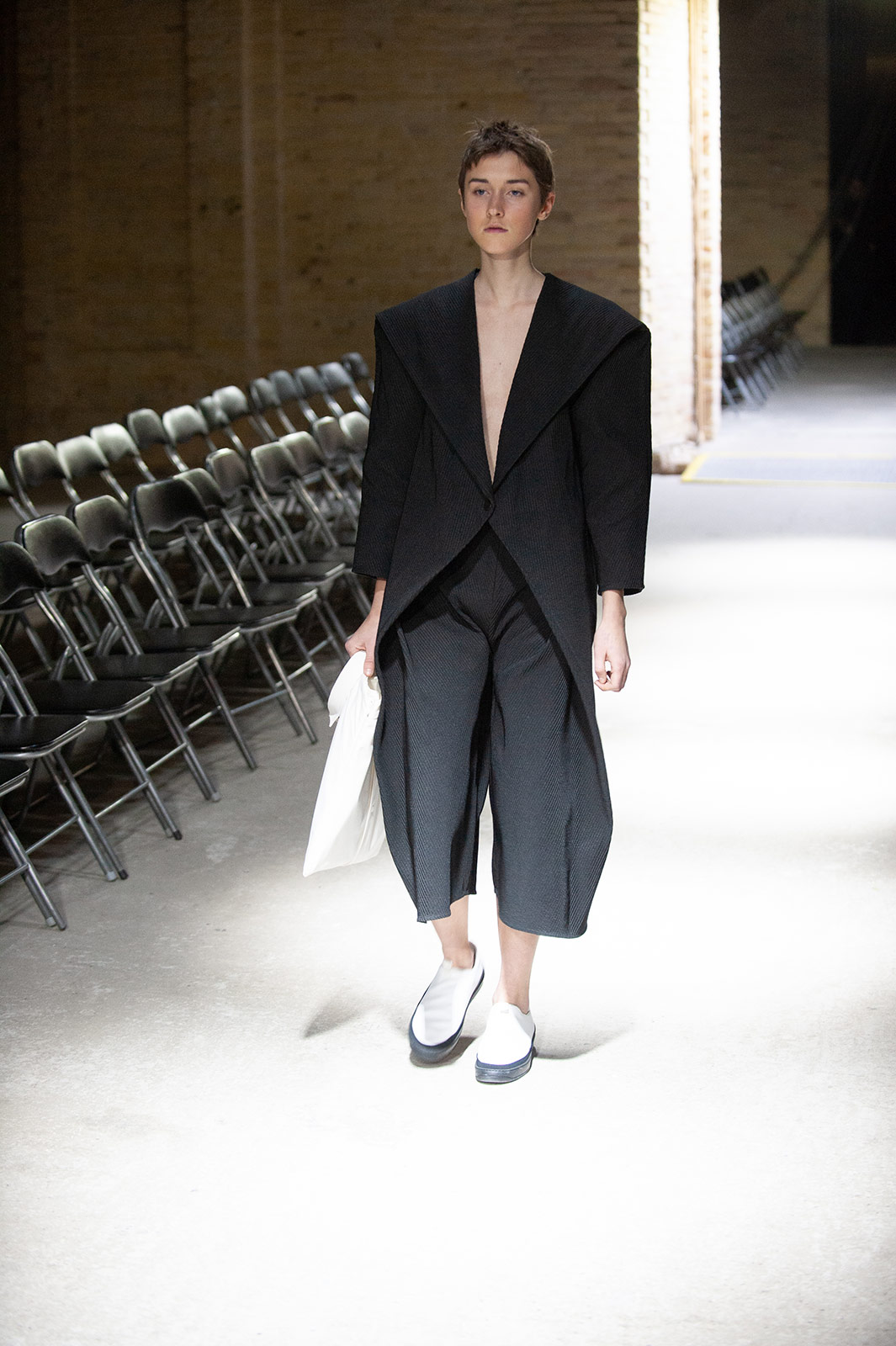 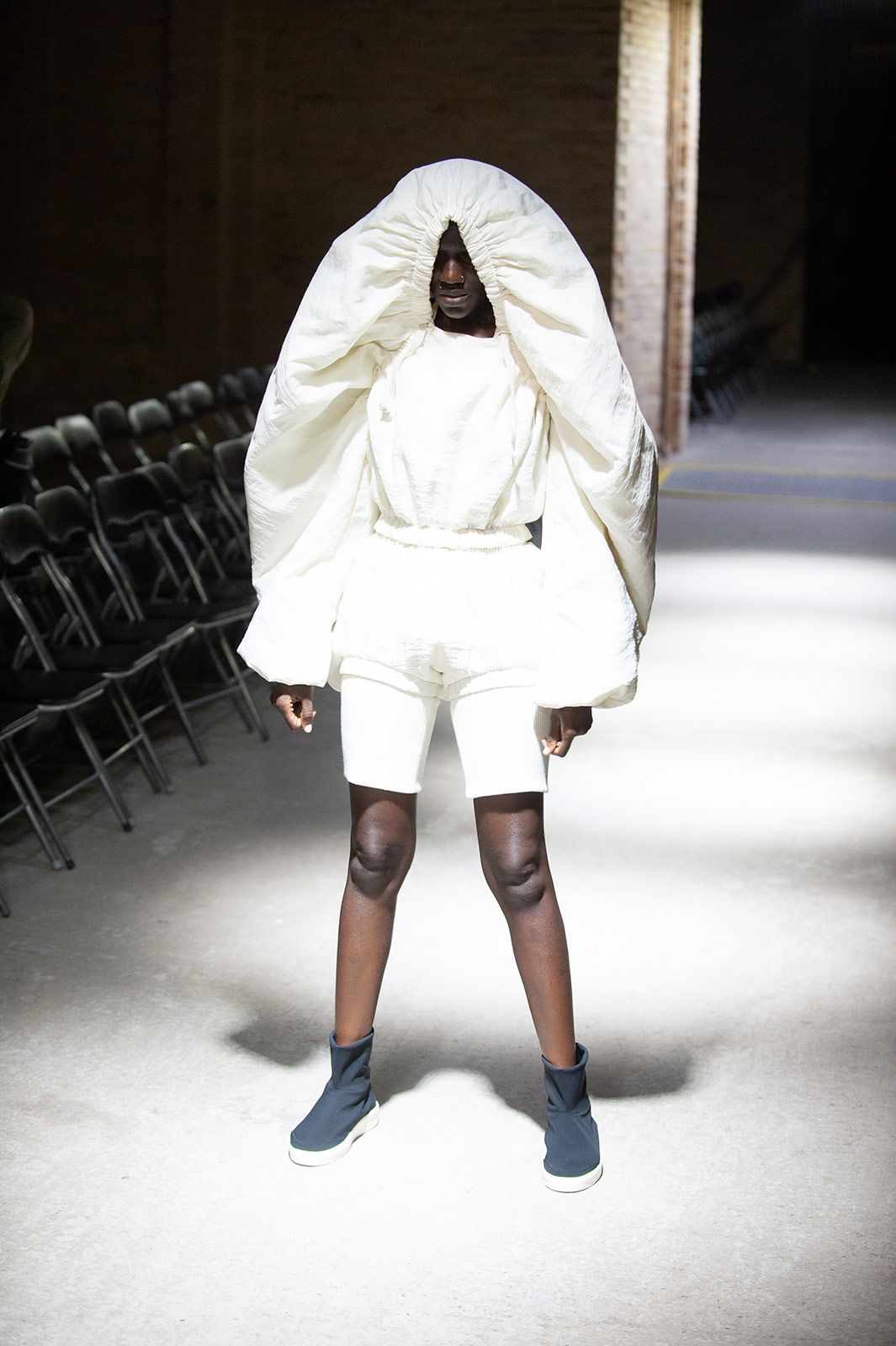 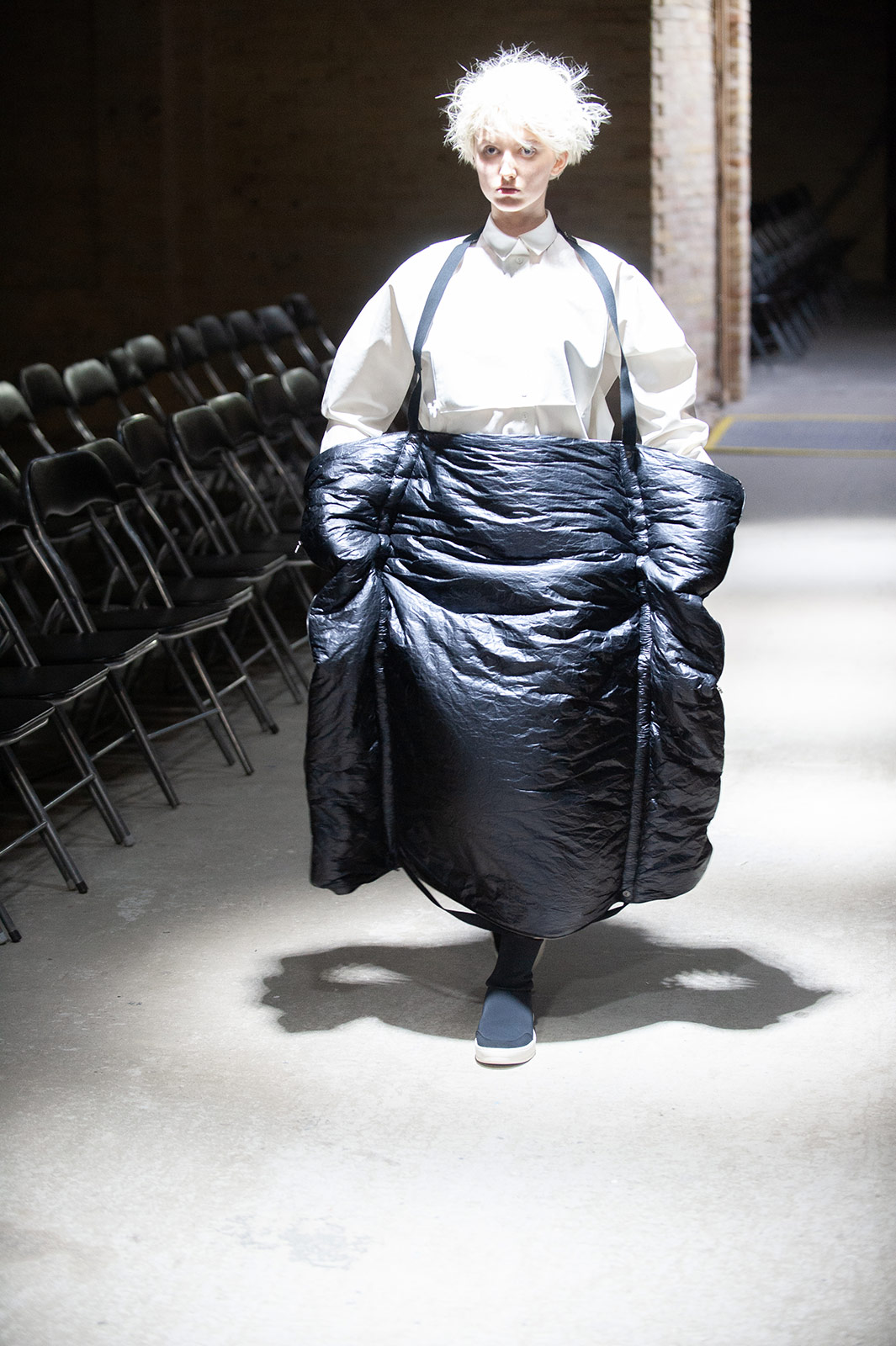 Idol
Inspired by Asian street style and the oriental influence in fashion during the 19th century, designer Serge Smolin presented a collection characterized by the use of cold colours combined with black and white, khaki and denim. Money, his collection, features coats, light jackets that simulate men’s shirts and vests, cardigans and cut suits, all styled by fishing and holey hats. When it comes to fabrics, he mainly used dense wool combined with light materials as well as nylon. For this show, Idol teamed up with brands like Vesna on the jewellery, New Balance on the shows, Feelings on the socks, and artist S. Payet to design the prints. 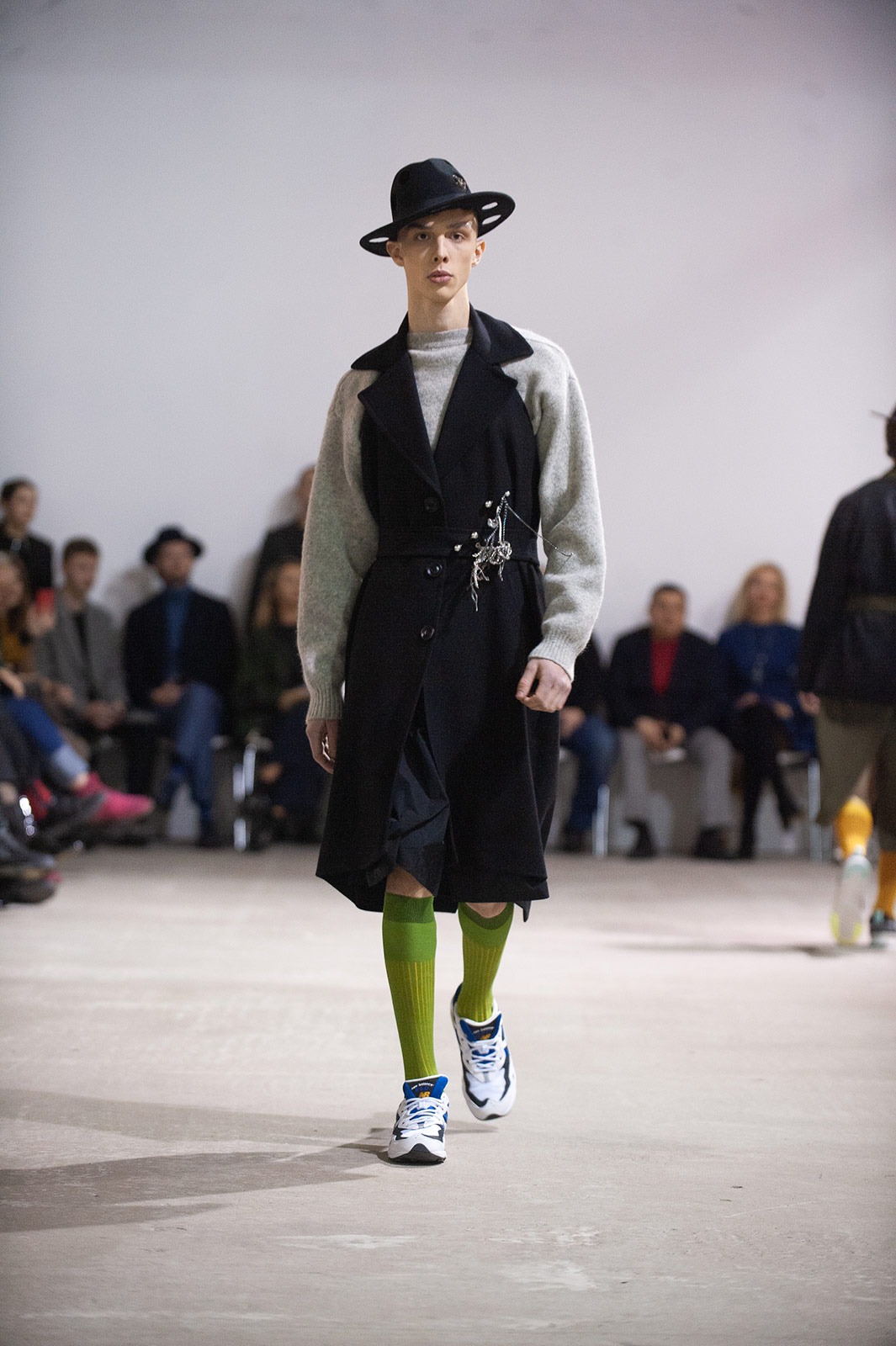 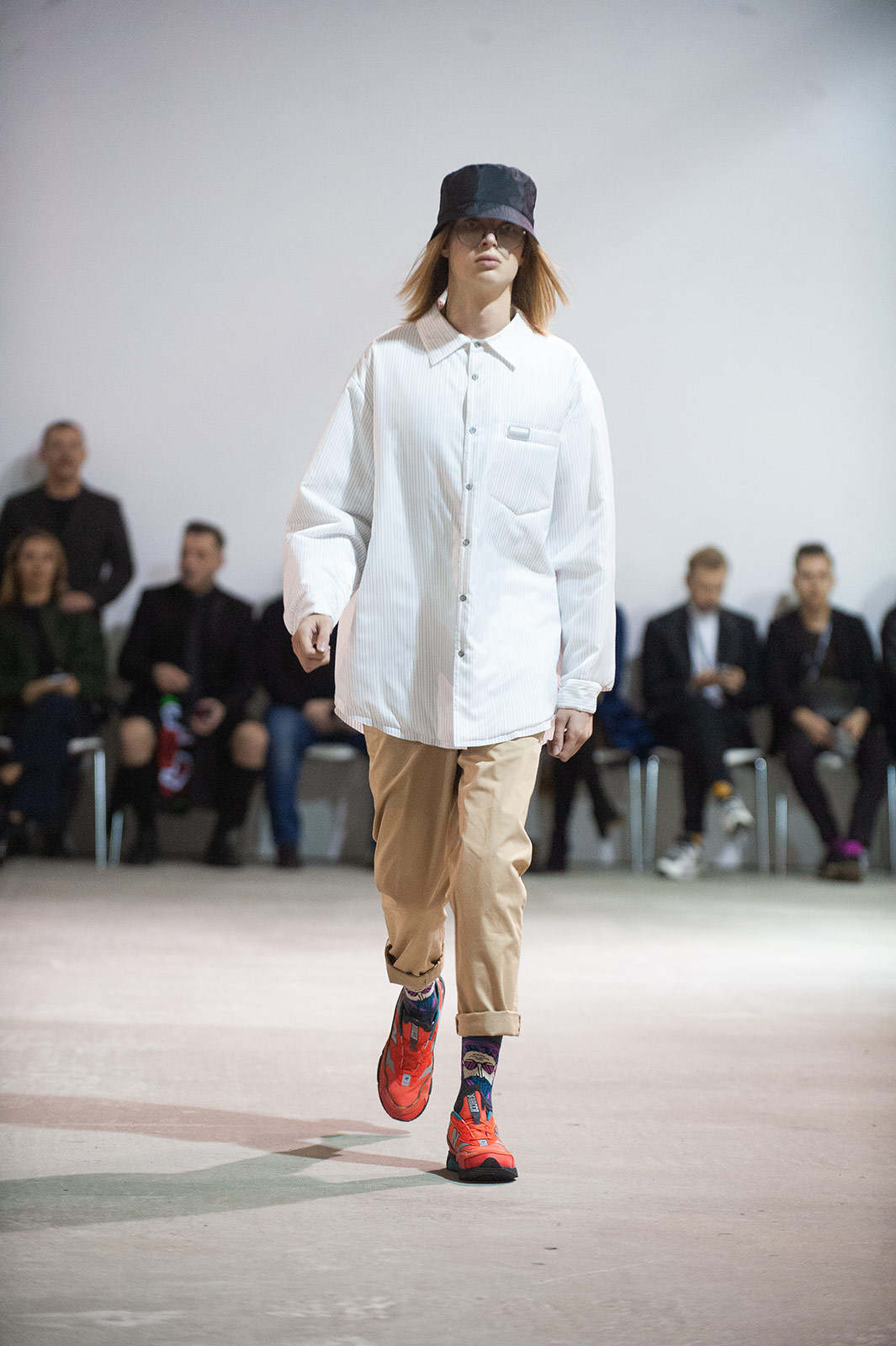 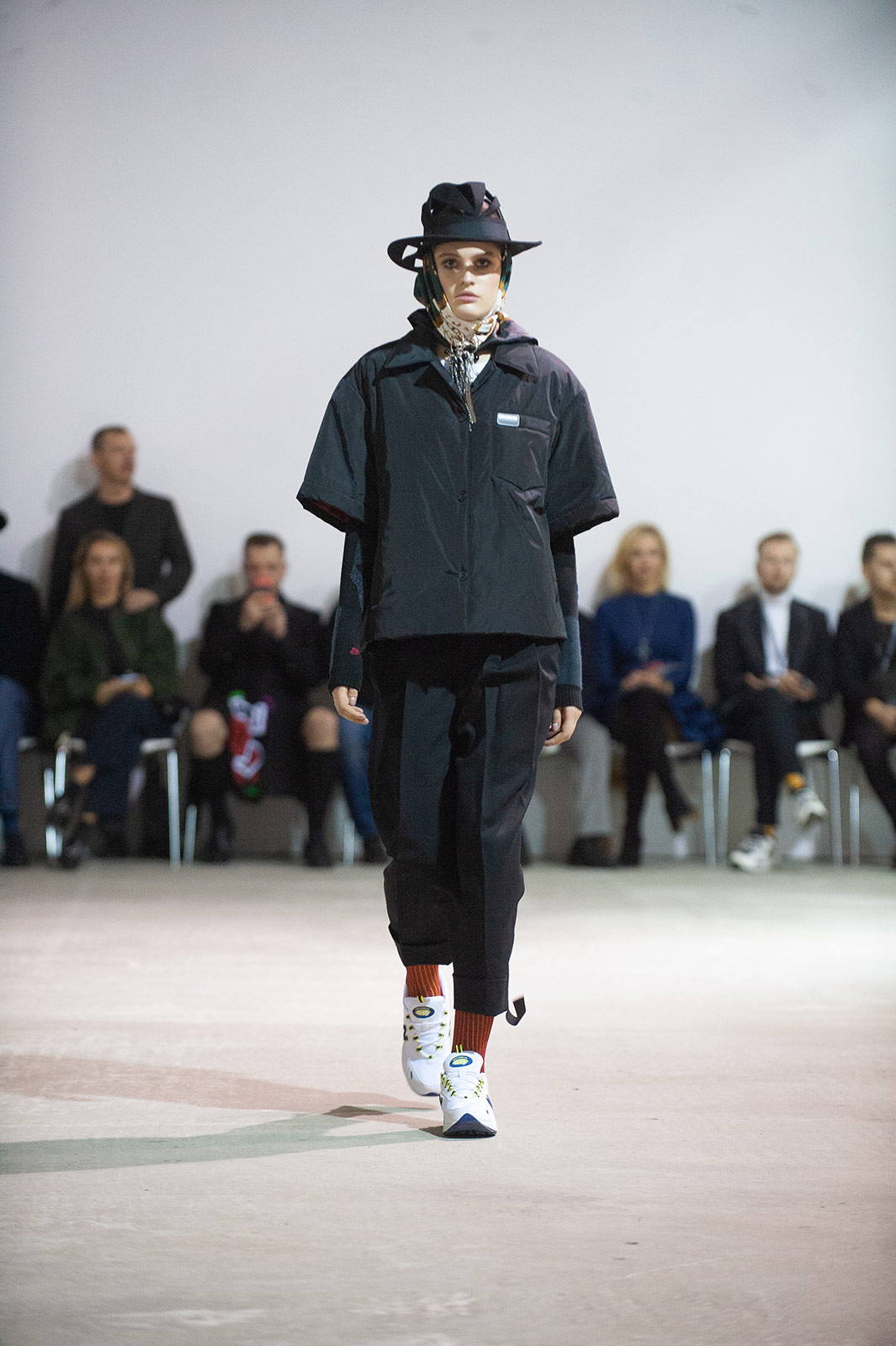