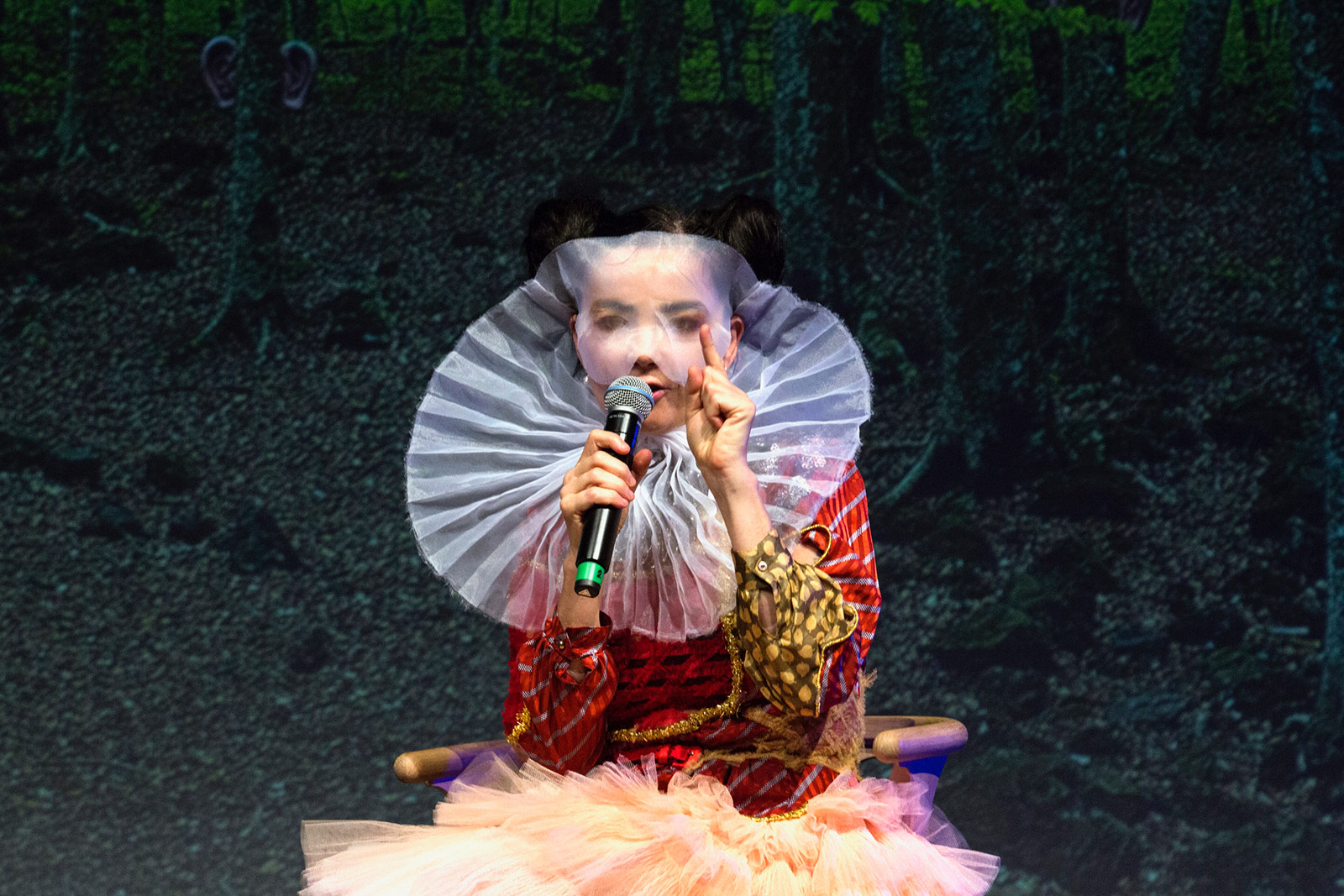 Some days ago Barcelona came up to be the neuralgic centre of technologic and creative innovation. Sónar+D 2017 brought us a panoramic view of the start-ups and advanced technologies that are being developed nowadays and will be introduced into society in the near future. Workshops, conferences, virtual realities, networking and a lot of experiences focused on arousing the curiosity of adults and children. Be an accomplice in the relationship between creativity and technology of the best cultural industries we discovered in Sónar+D 2017’s edition.

The one and only Björk was the person in charge of inaugurating the cycle of this year’s Sónar+D’s – also known as Digital Culture and Creative Technologies Congress – activities on Wednesday. The world-renowned Icelandic creative offered an exciting conversation in which she explained her beginnings, last projects and confessed some of her concerns – for example that she accidentally deleted the session she had been working on for that night set, or that she usually uses GarageBand as it is the easiest producing tool. She also explained that when she works as a DJ she usually develops the sessions depending on the environment and the place where she is working on, so there is no possibility to listen to the same set of Björk twice.

Besides, she usually asks the festivals/venues organizations to schedule her concerts in the sunrise or in the sunset, so she can combine the feeling of dancing under the light of day and under the darkness of the night. And that was the case for Sónar+D. Starting at eight o’clock, when there was still some sun, the queen of avant-garde performed a very conceptual and intense DJ set. It spanned from water splashing sounds to an unknown-language cover of Gloria Gaynor’s I will survive, going through Arabic canticles, primitive drums and rhythms, industrial glitched sounds, and many other references. Definitely the work and attitude of Björk can only be summed up in her own words: “¡Humans are fucking great!” 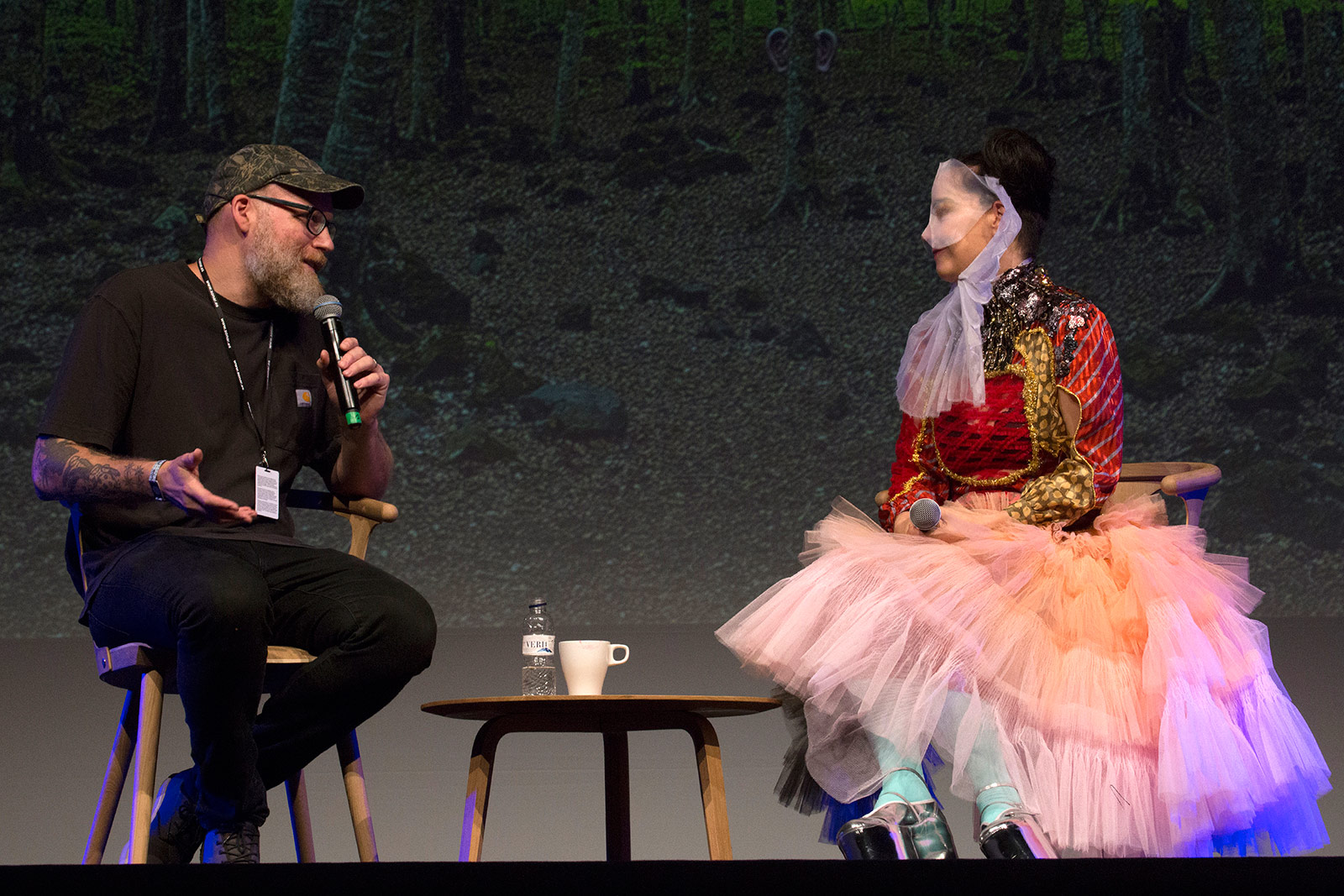 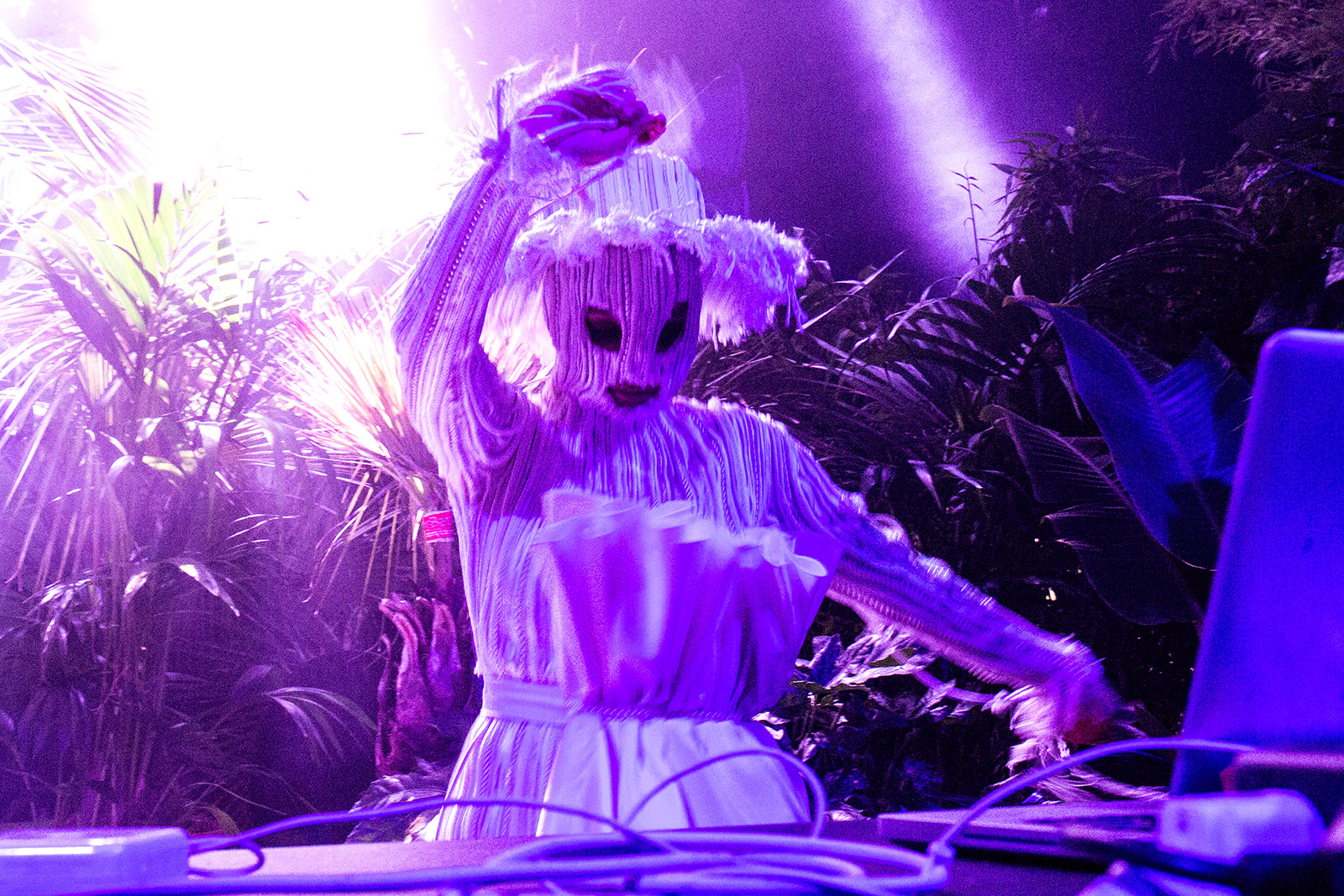 On Thursday, we kept on our journey to the present future in the MarketLab area, the place to be if you want to discover the most outstanding technology initiatives of the year. Here are some of the projects we specially loved:
My Artificial Muse by Architects of Morality

One of the main topics of this year’s Sónar+D is artificial intelligence technologies – and how this advances change the way we produce and create art and culture. Albert Barqué-Duran and Mario Klingemann are the architects of this innovative approach, an installation based in the use of an AI muse in order to create a mural – that came up to be the very first fresco completely designed by a computer.

The neural network designed by Klingemann is capable of creating a classical painting by taking as unique reference a stickman figure – the most simplified version of a muse – so they delighted us with the interpretation of Ophelia, the Hamlet character painted by Everett Millais in the mid-nineteenth century. After contemplating the creative process of My Artificial Muse for days, we wonder, what will be the relationship between the romantic artist and the technological advances in the future?
Tinami & Words by IED

The next dimension we discovered was the Istituto Europeo di Design stand. The Barcelona-based university brought us two powerful projects made by students of the Master of Interactive Applications.

Tinami is the proposal of José Sebastián Narváez Washima, and it consists of a MIDI controller customized via online before it arrives home. And you’ll be wondering, why is that something new? Because you – or your musical producer cousin – can adapt your Tinami hardware with the elements and tools you really need and exclude those menus, keys and buttons that you won’t use and actually occupy an unnecessary space.

The second IED project is an installation developed by Danae Fisher, Milena Roses and Junior González. Words is an interactive installation where the words of the audience get materialized in visual and sonorous statements. In a dark room occupied by mirror walls and a large microphone they seek to compose a musical piece based on the public voices and messages. How will the Sónar+D 2017 soundtrack be?
Data DUO by Dato

The most romantic place we saw in MarketLab was the Data DUO stand, where music could be the answer to love and understanding. Dato, a company founded by designers David Menting and Toon Welling, designs and builds innovative musical instruments with a strong focus on the creation of musical experiences. This year they brought us Dato DUO, a musical instrument for playing more than one person at a time regardless of age or musical ability. The instrument has two faces: on one side there is a circular sequencer that determines tempo and melody, and on the other side, a synthesizer to deal with sound effects. An undeniably fun way to discover the world of music production and to learn how to blend in with your creative partner.
Startup Garden powered by Migration

The next place we introduced ourselves to discover what the future holds for creativity and technology was the Startup Garden, powered by Migration. An area dedicated to the entrepreneurial community in the creative and technological fields. Here, only thirty start-ups are selected and will benefit from a program of activities specifically designed to boost their promotion. These are two of the most interesting ideas raised at Startup Garden:

Look, coming from Belgium, is a mobile application that allows the user to see – in real time and via streaming – what happens anywhere, anytime. The mode of operation is simple: choose a place and ask whatever your webcam is for twenty seconds.

Solidface is an English project based in a real-time collaborative CAD software. It allows you and your mates to work simultaneously in the same 3D CAD model regardless of the workplace of each of the users.

After walking through the MarketLab area, we were still eager to discover more during the whole festival. So we entered some VR experiences to see how are social media, music videos and films going to be – or at least, how we expect them to be. 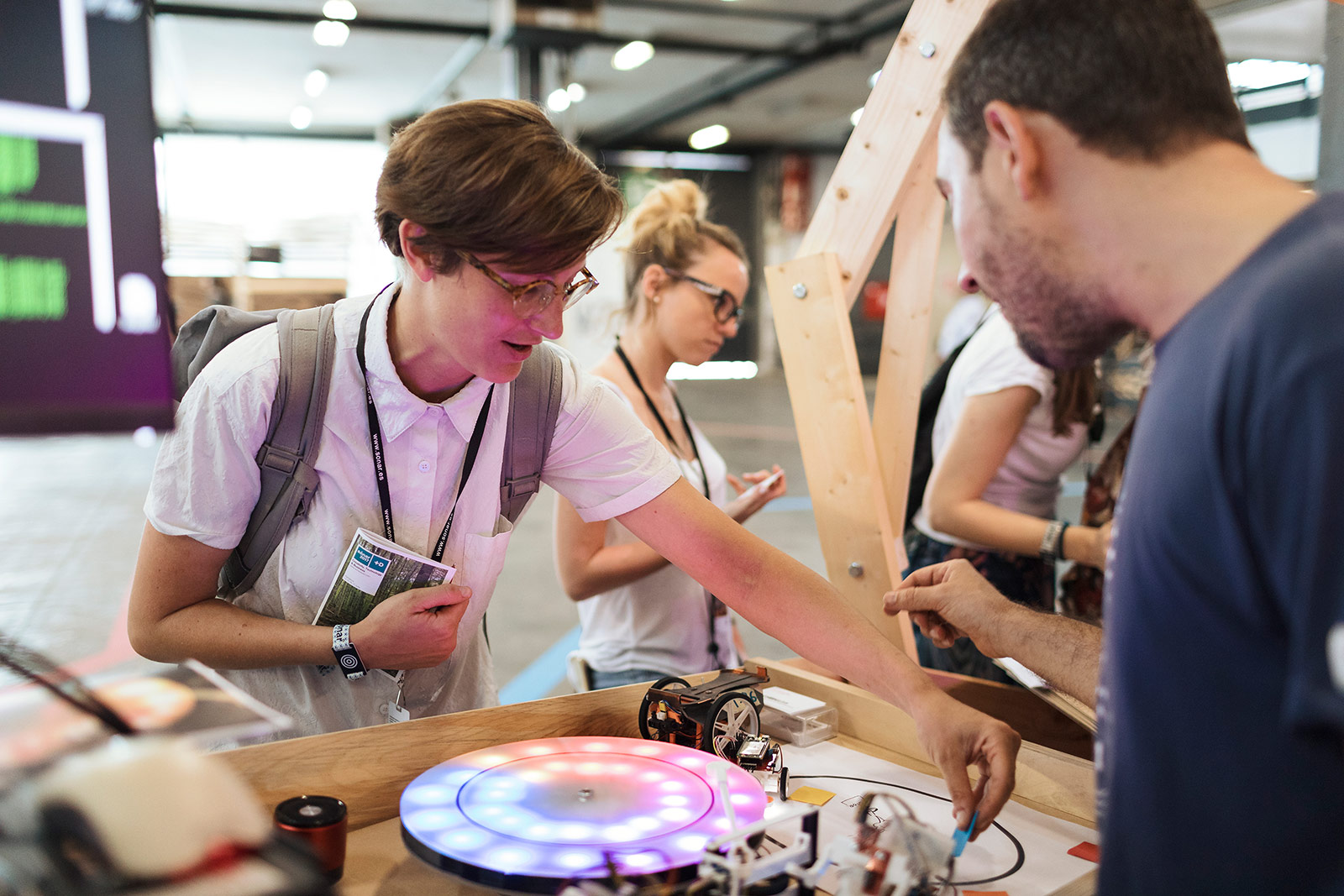 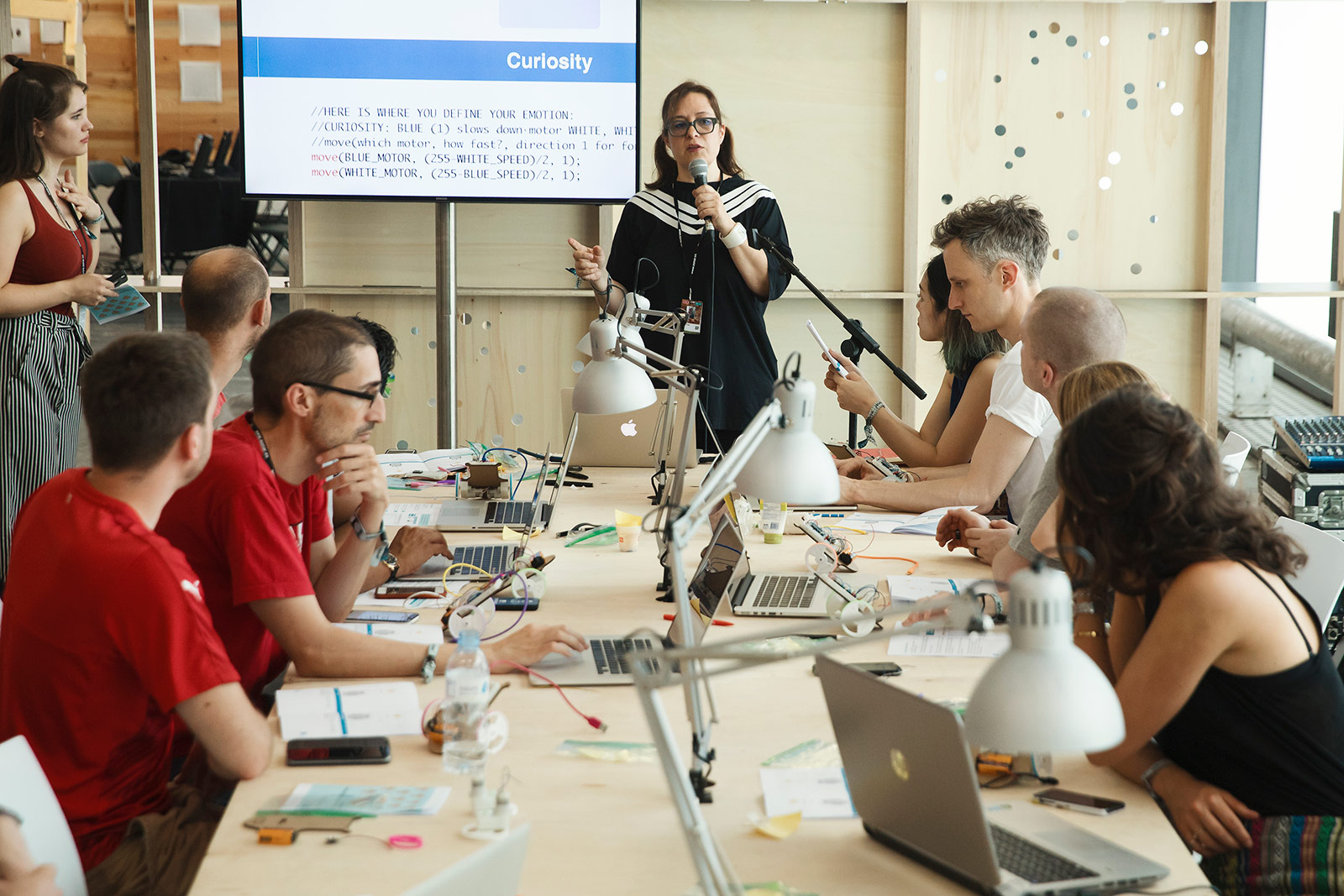 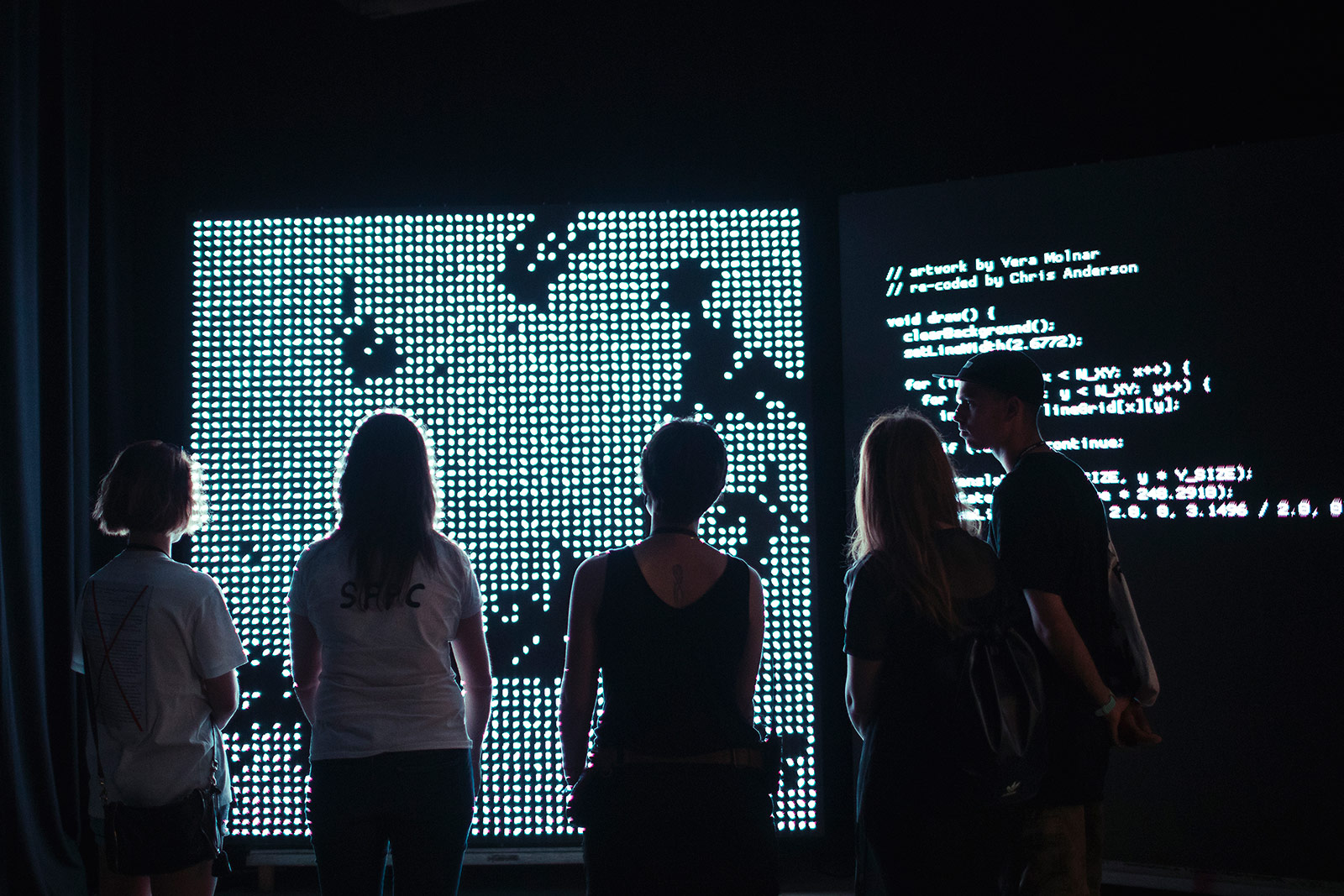 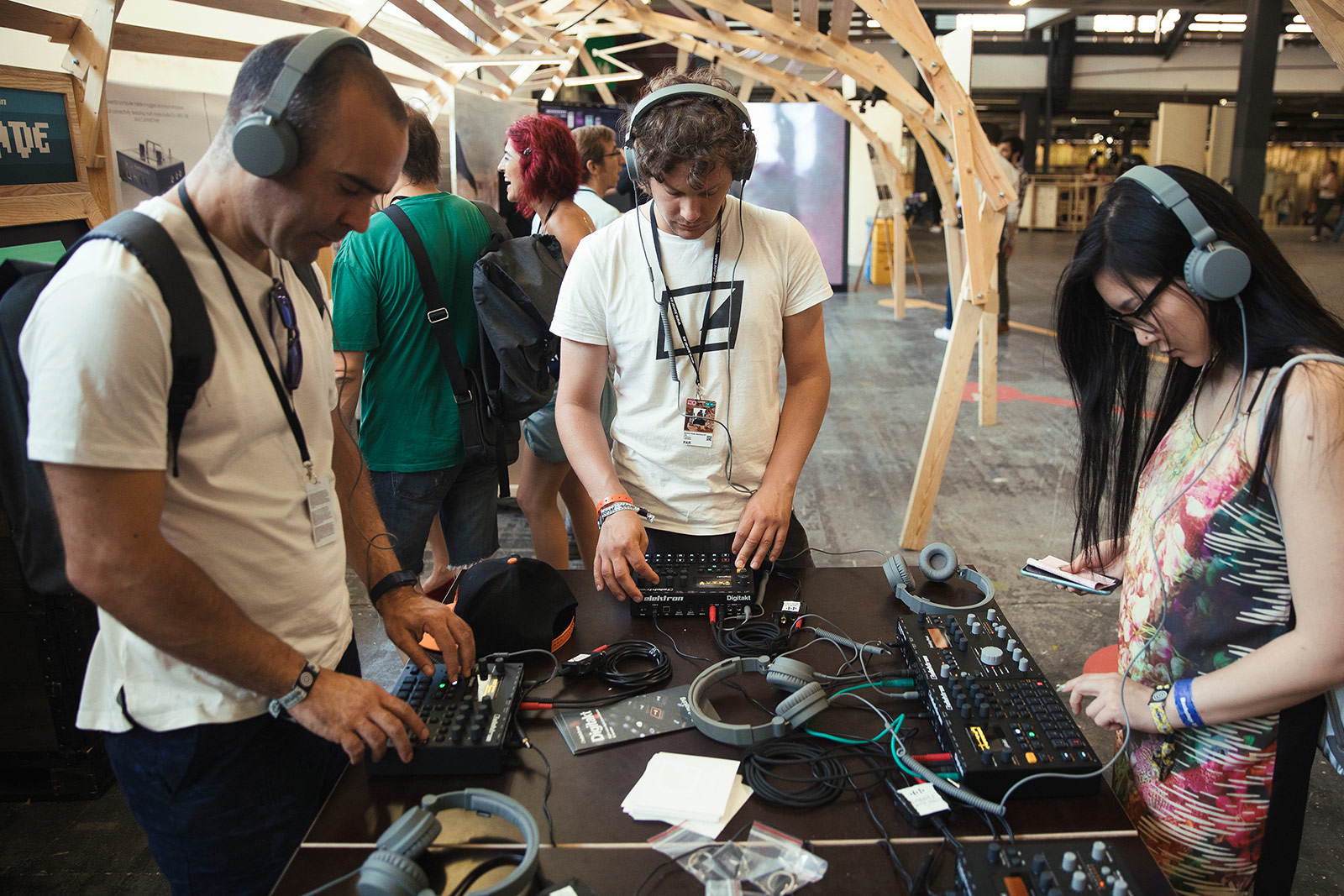 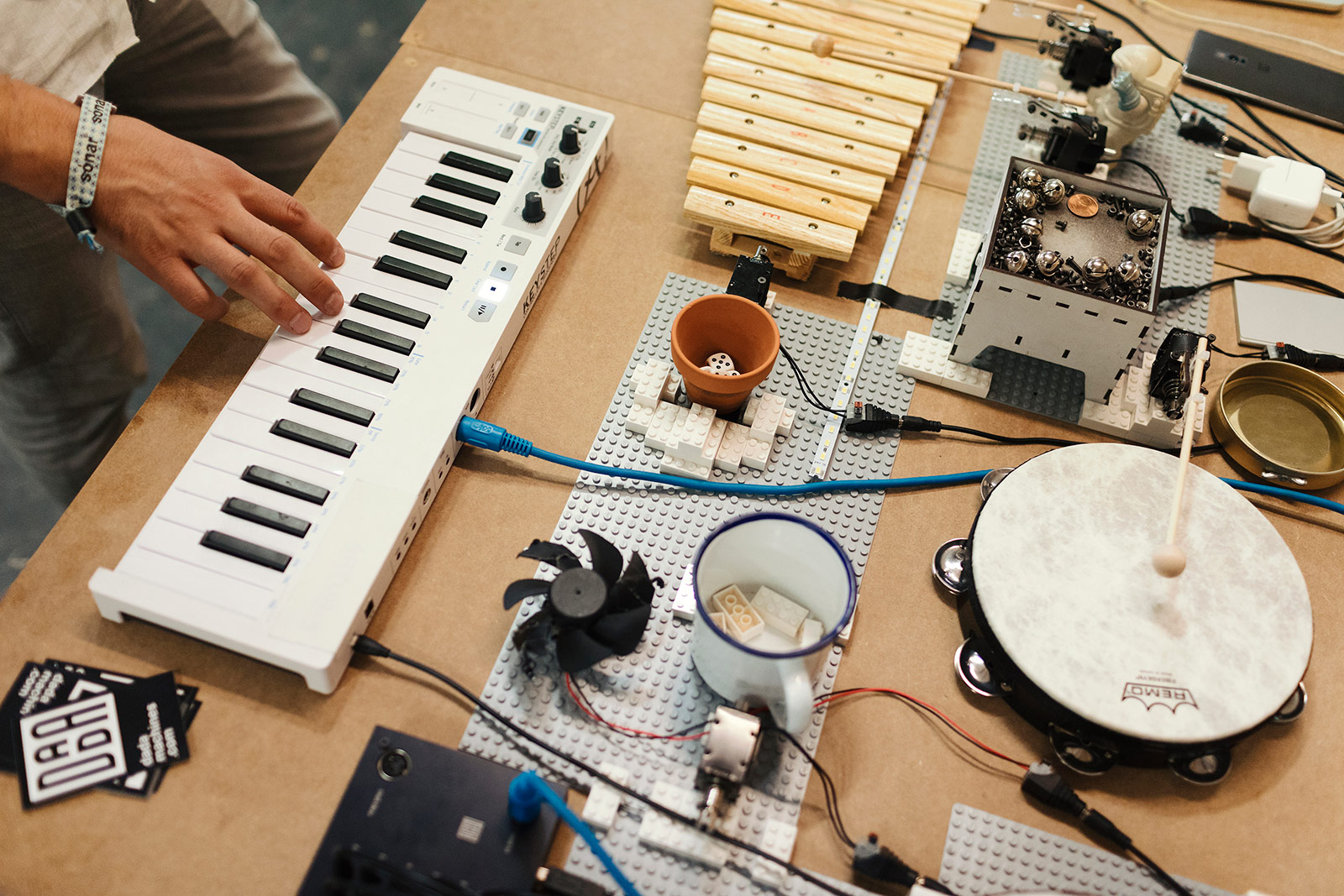 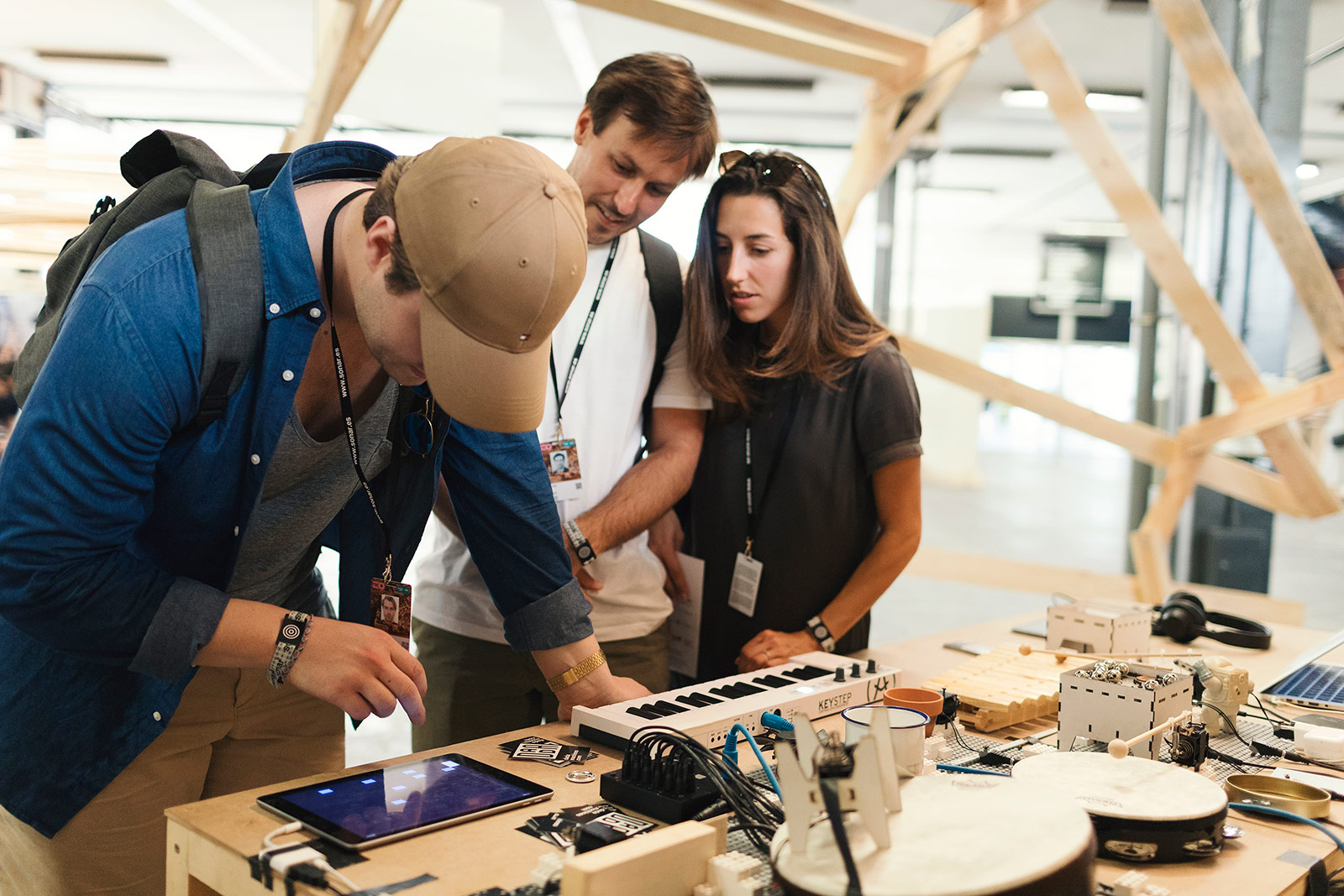 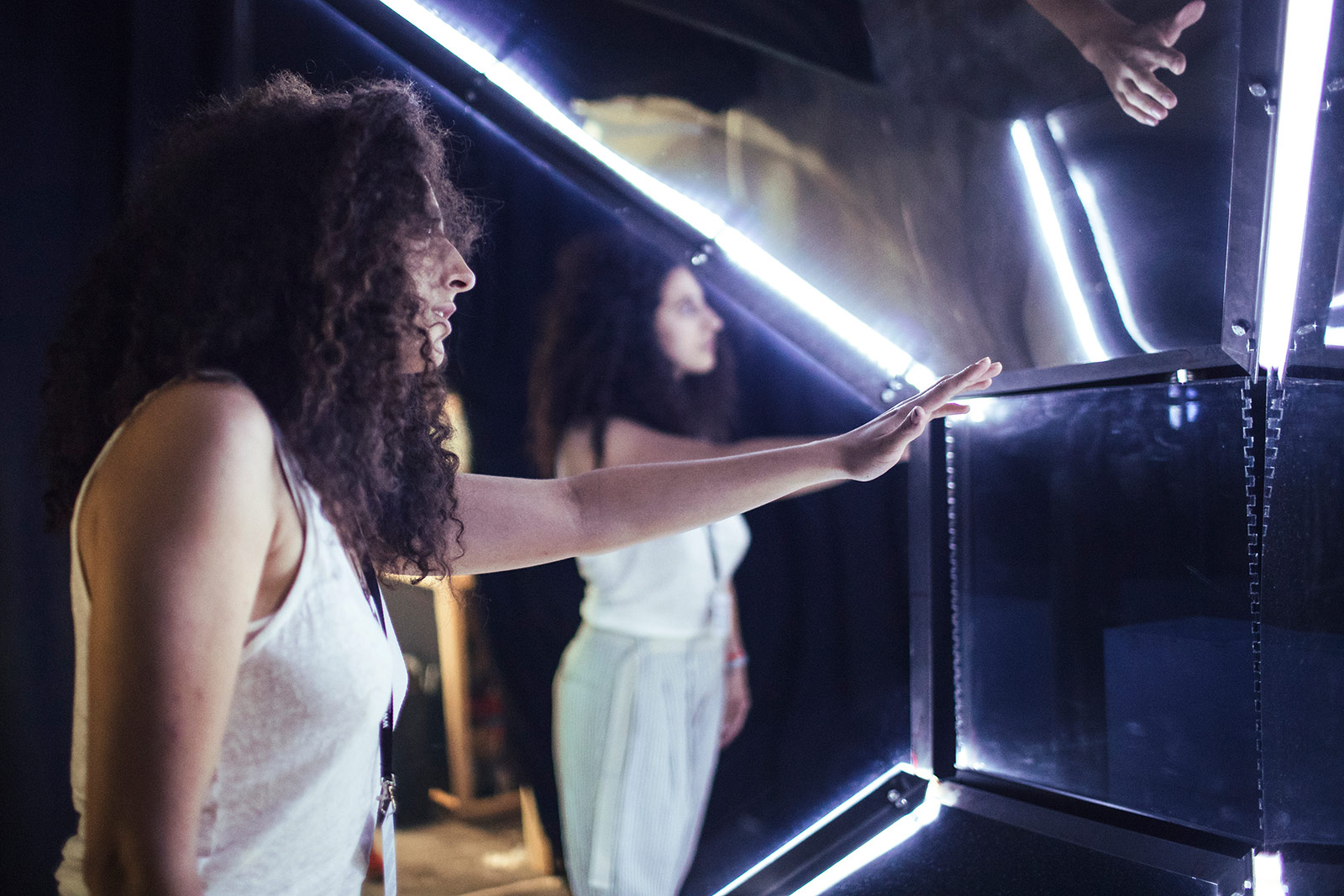 Inside Sonar360º by Movistar+ dome, it was difficult to guess we were in a festival. The world outside seemed to disappear, although most of the sounds didn’t while waiting for the show to begin. But once it started, and we were laying on the floor, we could only pay attention to what our eyes were seeing. The Versus experience, made by French-Japanese duo Nonotak – who were performing at the music festival as well – was trippy as hell. Digital created abstract patterns and images seemed to be buildings or non-existing spaces that wrapped us in a oneiric, futuristic universe. When everything was finished, getting up was harder than what we imagined, since our perception of space and distance had just been tricked. 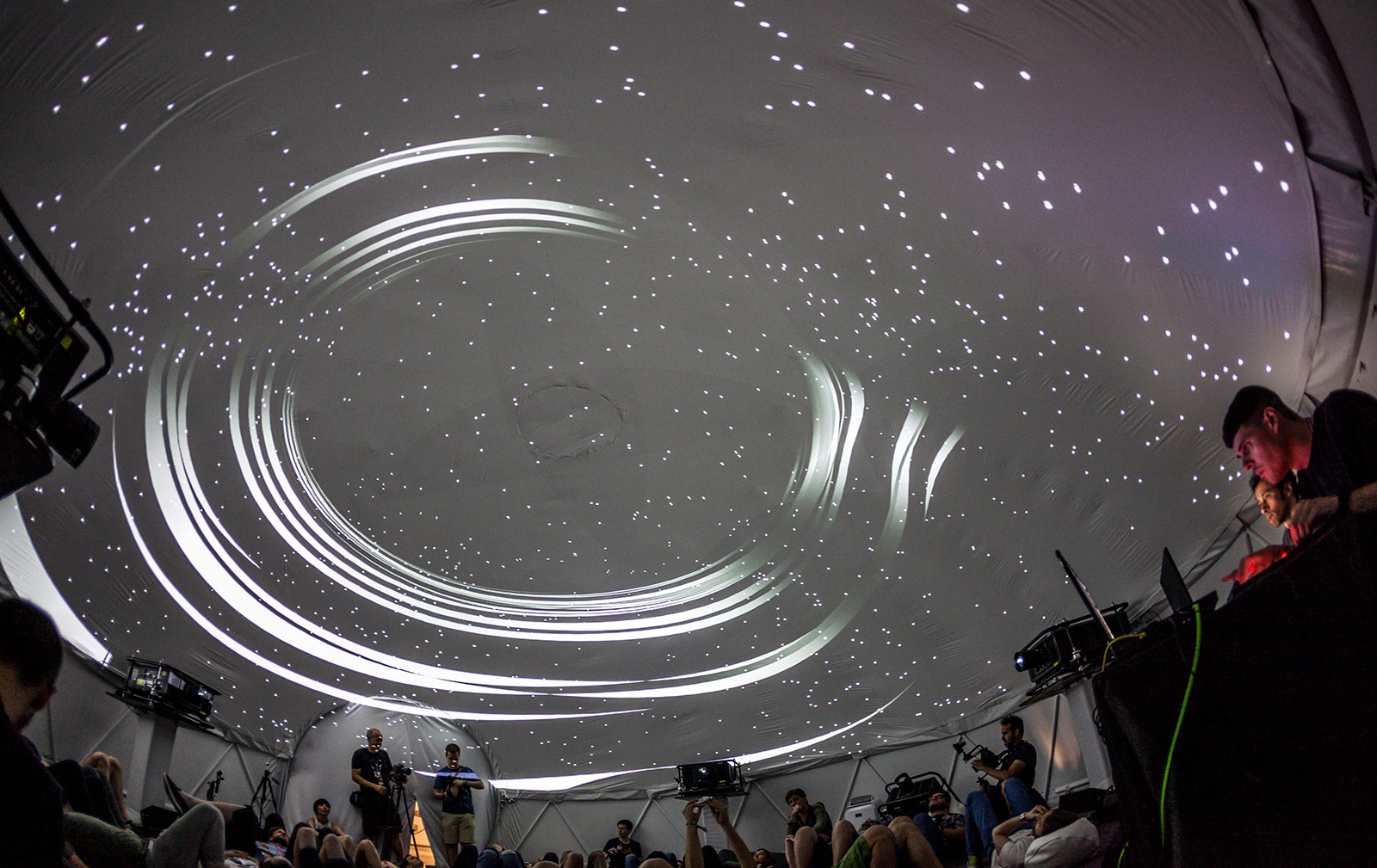 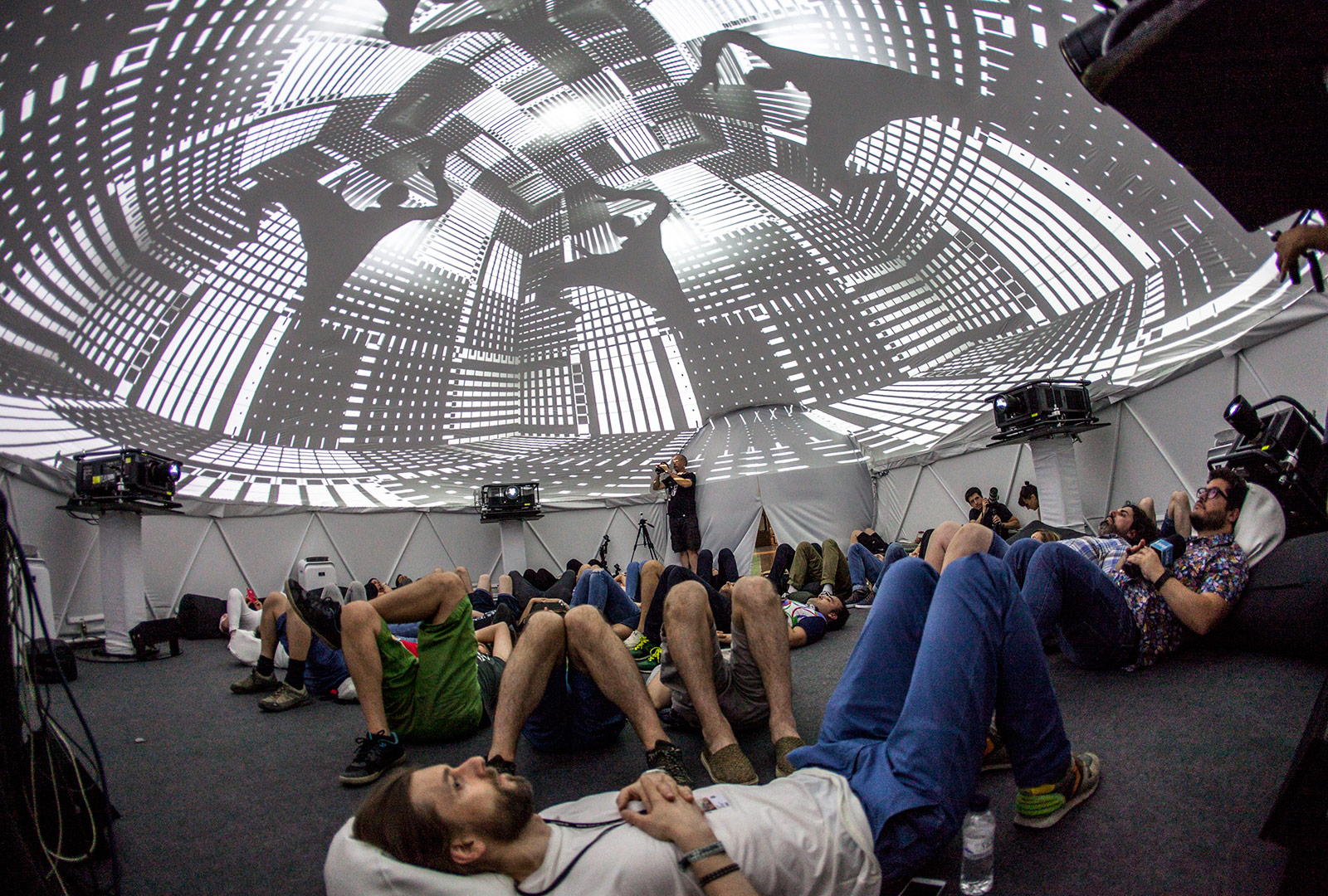 But the top highlight of this year’s Sónar+D was definitely Phosphere, the immersive installation created by Daito Manabe. Entering there was the closest we’ve been to virtual reality, actually. No need for big glasses and sensor-detector gloves; just light, movement and space are enough to make our brains and bodies go wild. When entering, we had to take a spherical gadget that attracted the lights, so every step we took made the environment change. It was odd finding unknown people around who were also transforming the place where we were staying, but at the same time complicities emerged. And on the last day, the dancers of Elevenplay, a Japanese dance troupe known for their use of high-tech in their shows, performed in front of a rather small audience, getting an intimate feeling and regaining hope on how advanced technology might not be as bad as Black Mirror wants us to think. 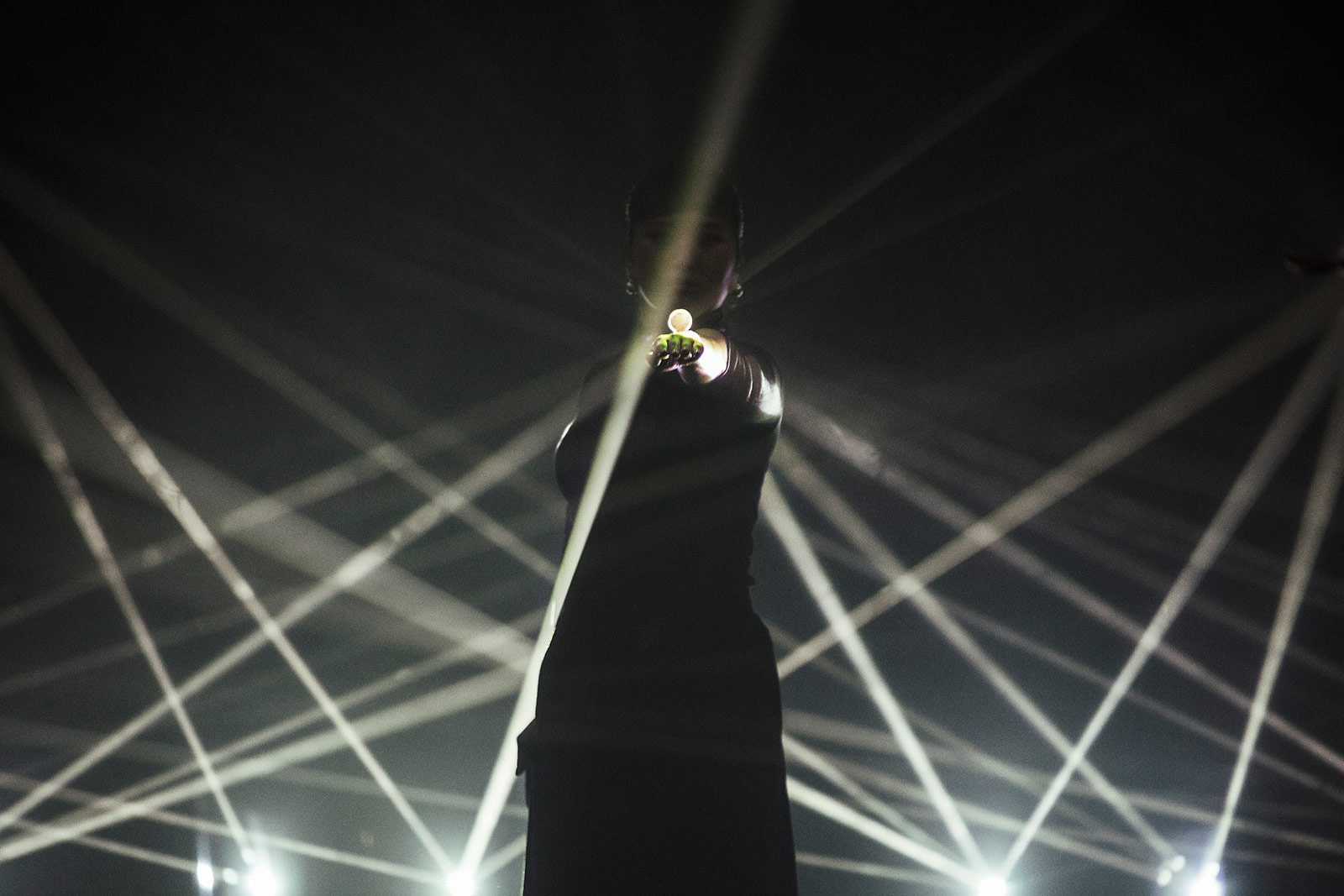 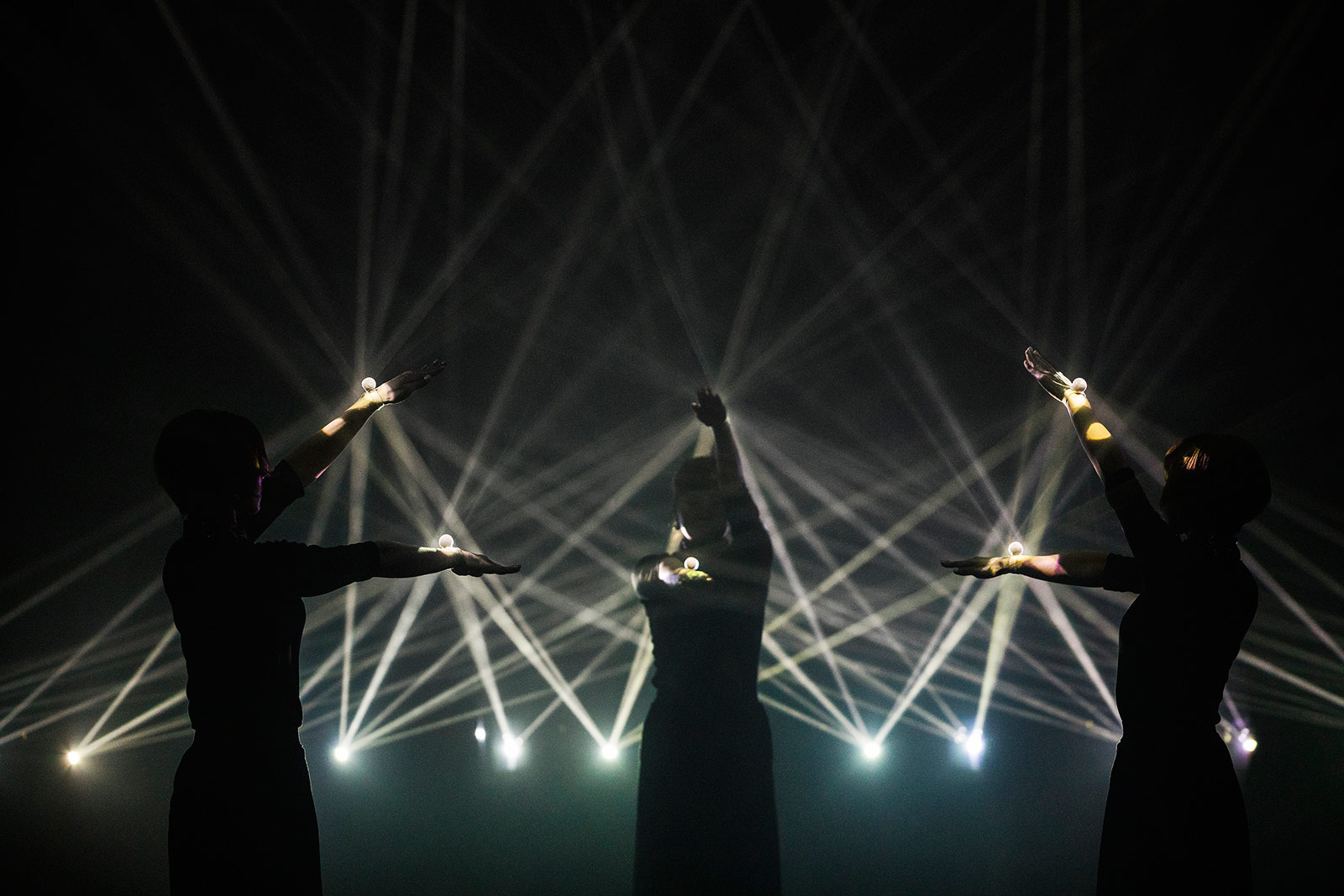 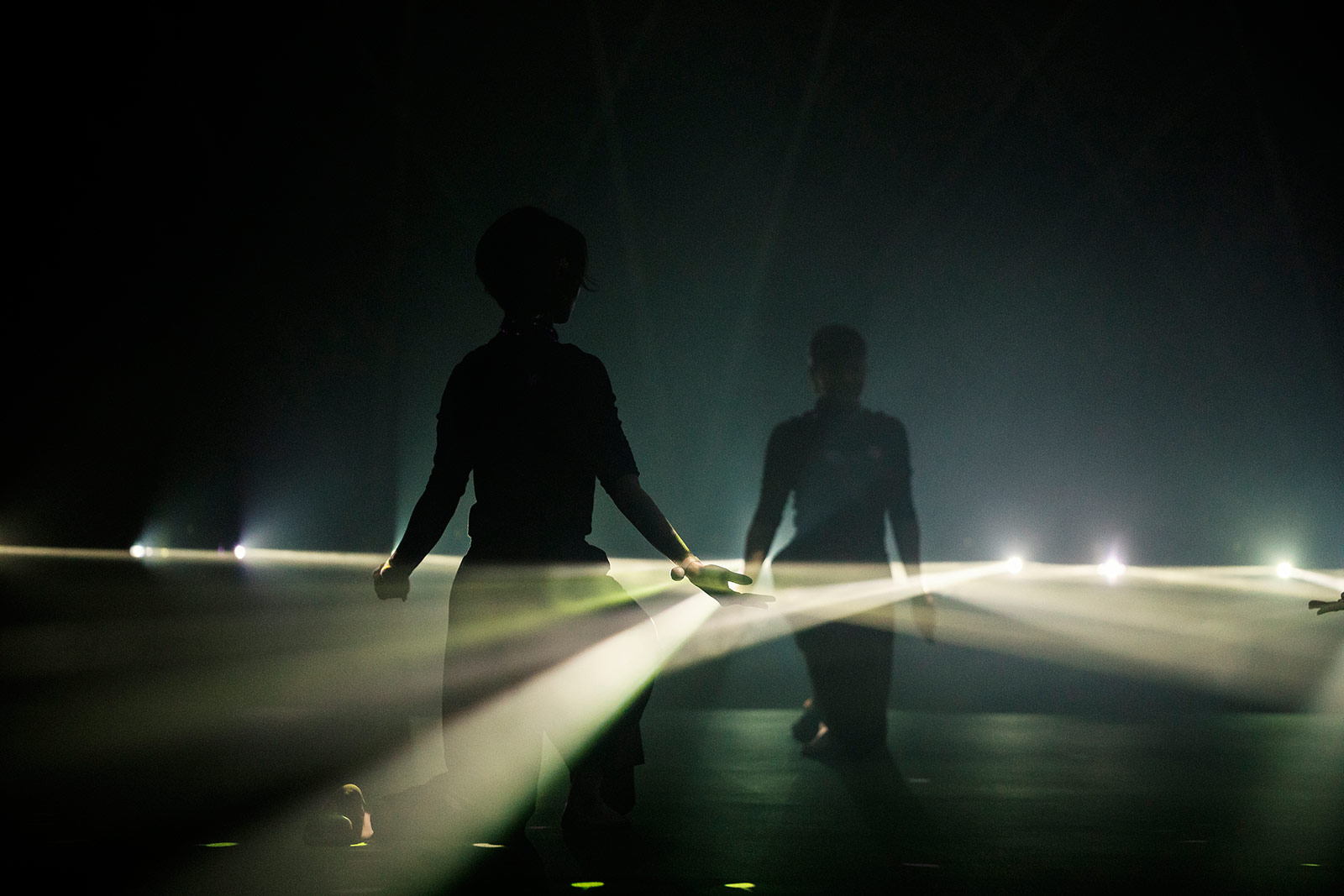 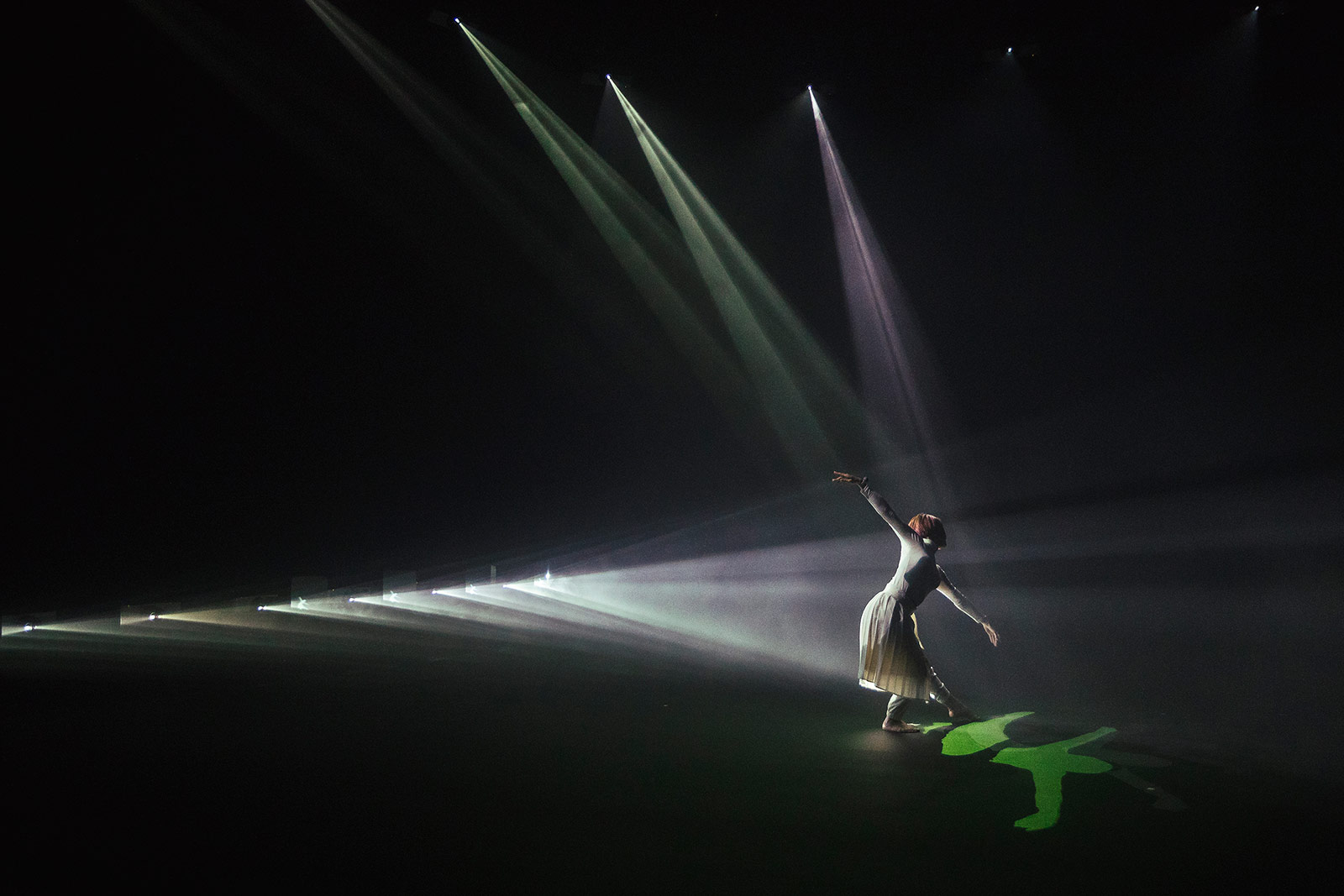 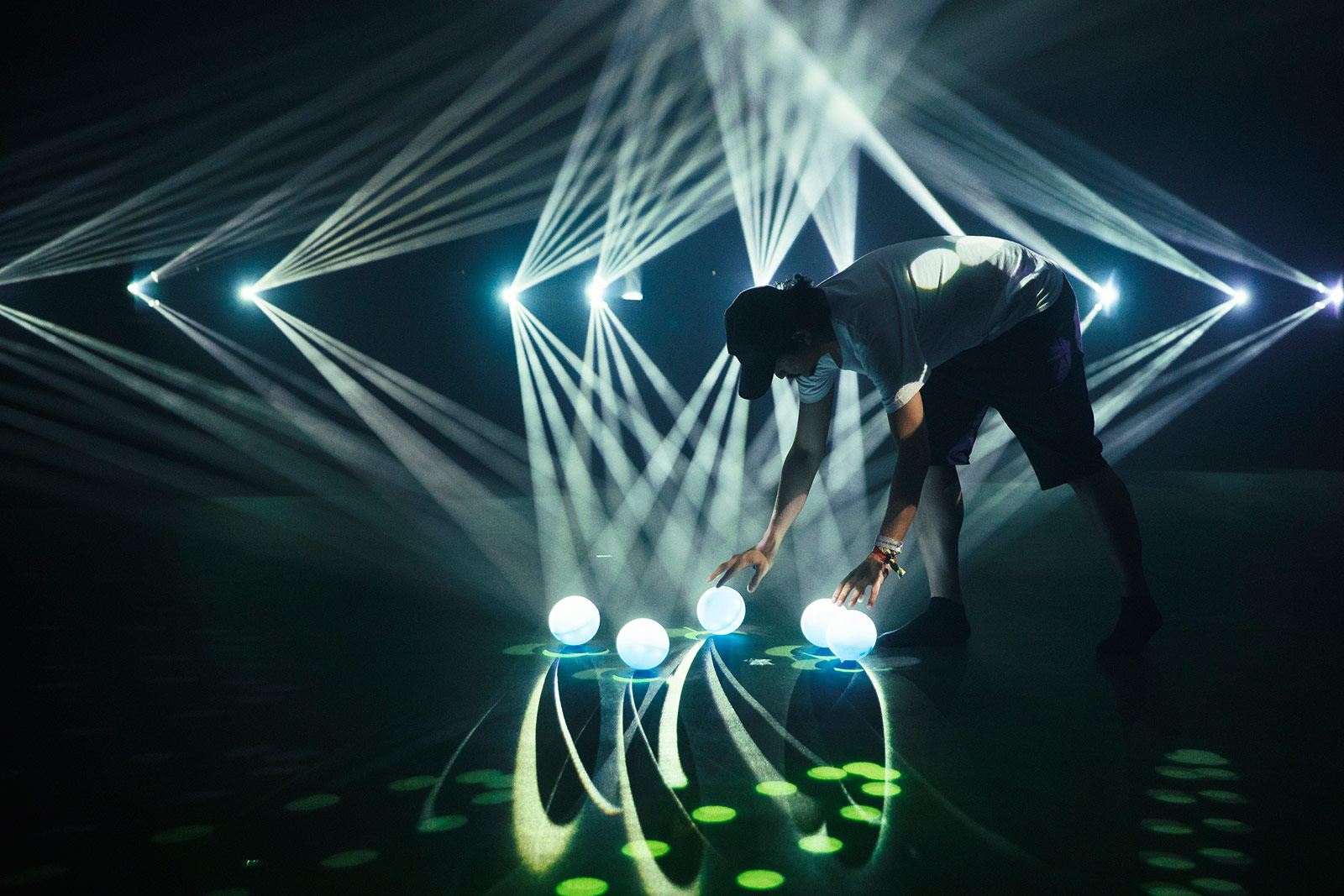 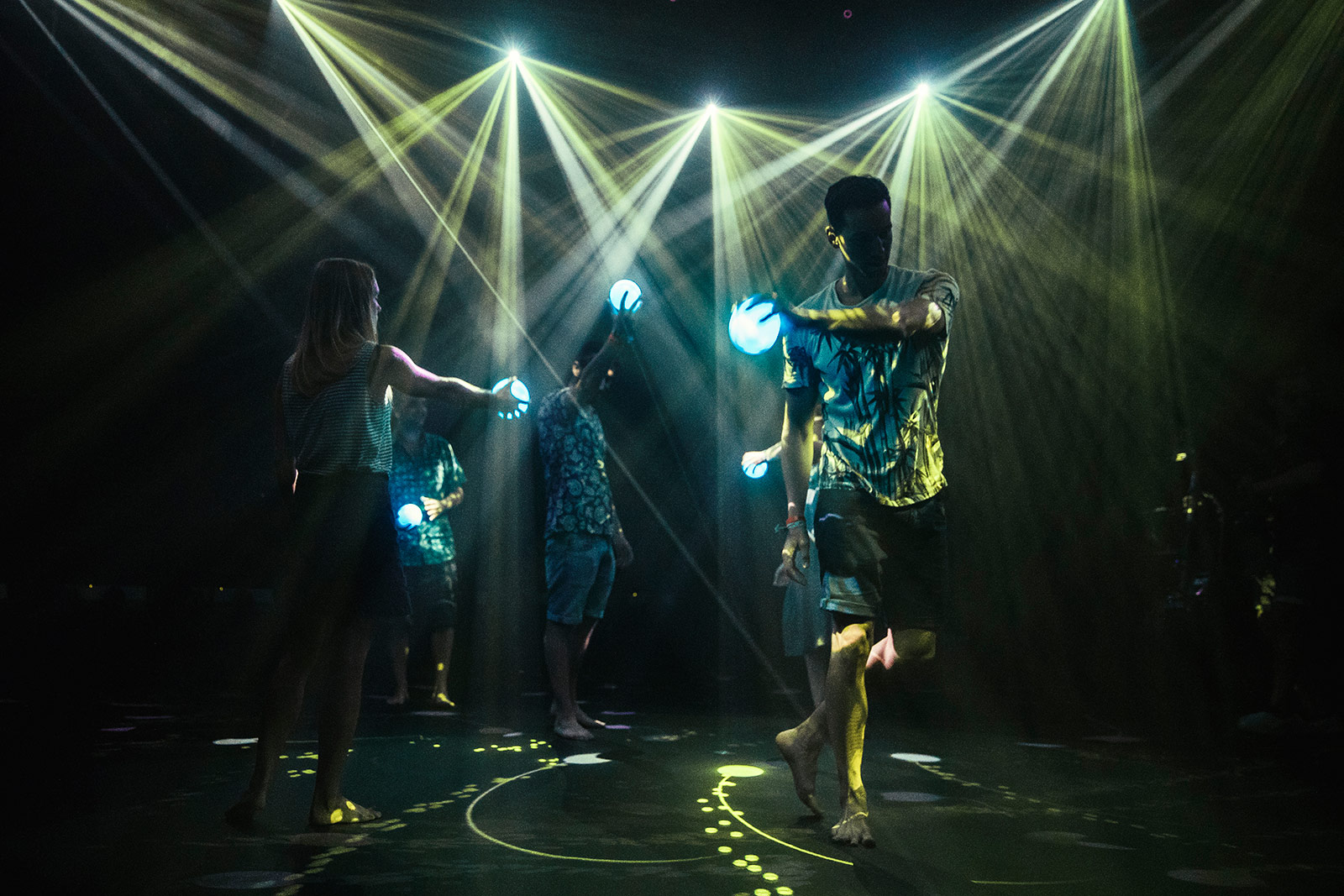