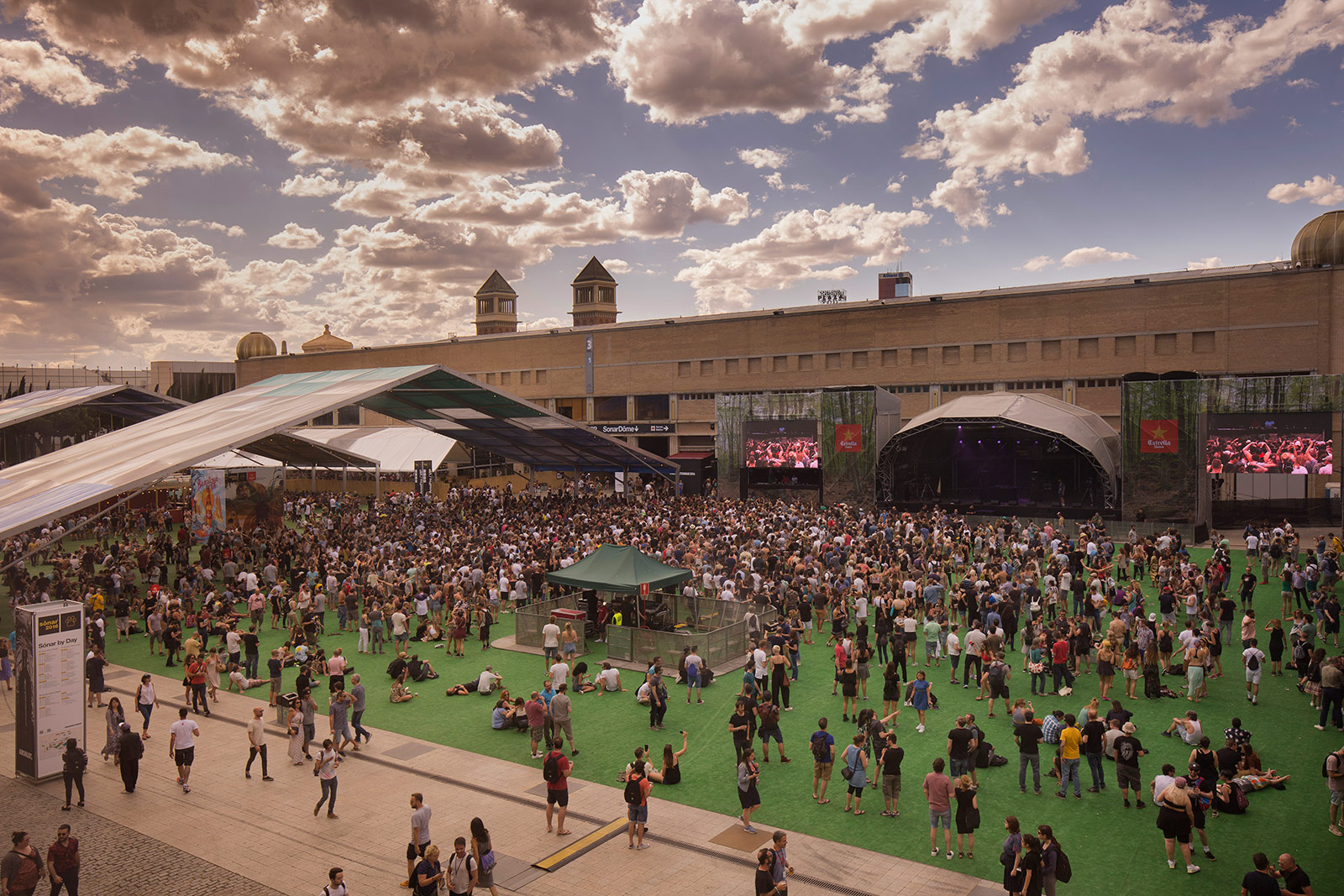 During three entire days, Barcelona became the global centre of electronic music and technologic innovation. In addition to the artists’ performances, there were also conferences, workshops, round tables, and art installations, which make the festival one of the most complete, eclectic and interesting ones in the world. There were so many concerts to attend and so many other activities to do that we couldn’t sum them all up; for that reason, we decided to choose the top 10 moments that need to be highlighted.
1. Nicola Cruz

Performing at SonarHall, a huge room with red lights and curtains that resembled a David Lynch scenario, Nicola Cruz proved that he is on the rise for good reasons. He connected immediately with the public, making us dance from beginning to end to the electronic beats and the Andes ritualistic sounds that characterize his style. His best-known hits like Colibria and La Sanación intertwined with folkloric songs like Agua de la tierra, as well as with hypnotic visuals and psychedelic lights. His performance was, definitely, the best way to start the festival. 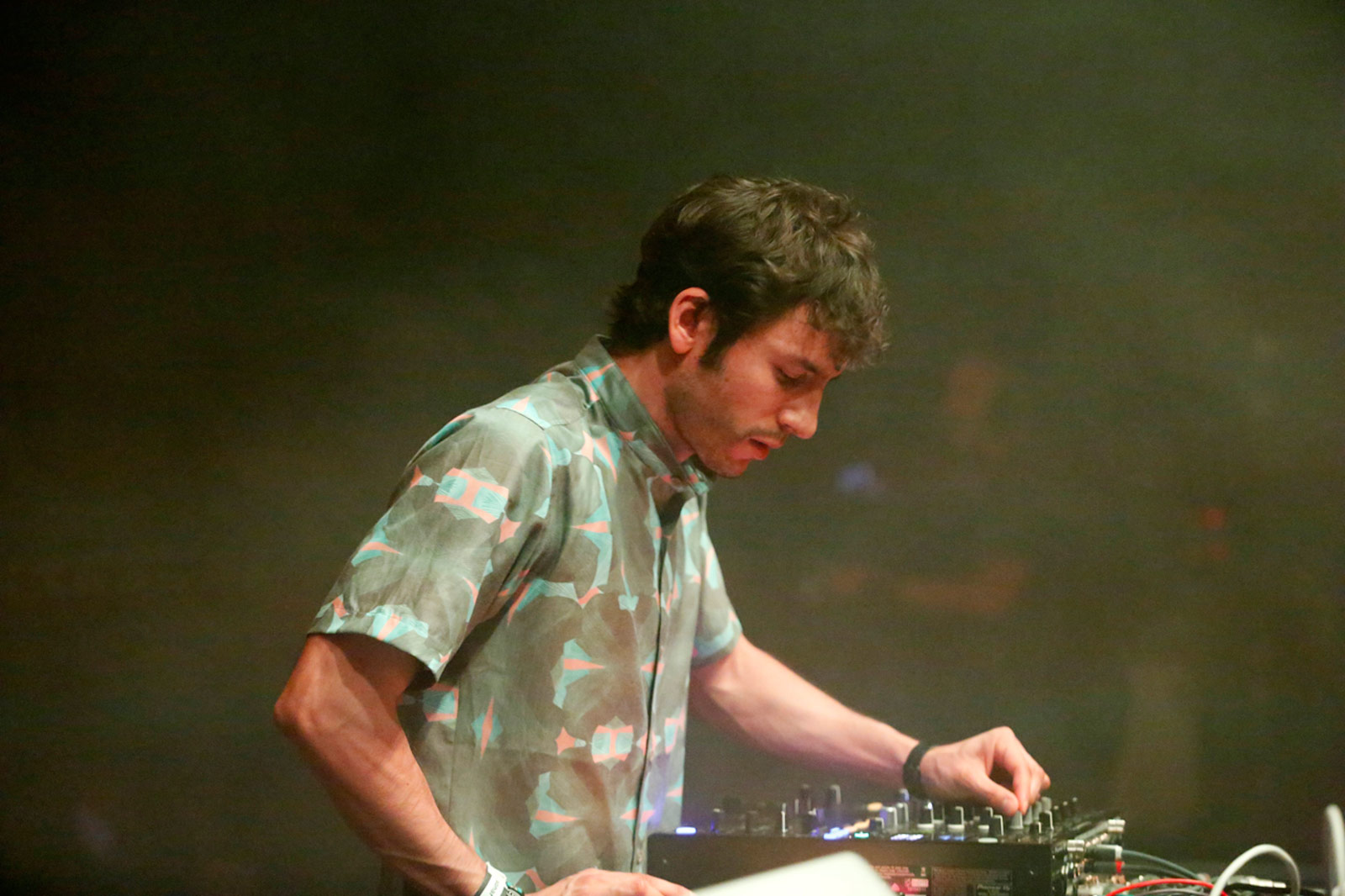 Performing both during the day on Friday and after dark on Saturday night, Santigold wowed the crowd with her unique sense of style and humour-filled dance routines not once, but twice. Dressed head-to-toe in identical outfits, her two perfectly pear-shaped backing dancers were quite the show stoppers. Both the prints she and her dancers wore and the visuals projected against the back wall of the stage drew on the idea that her most recent release is what she considers to be her “pop art” album. Playing both tracks from 99¢ as well as standout hits from her critically acclaimed self-titled debut, the show concluded with the New Yorker inviting many members of the crowd up onto the stage for a performance of Creator. We’d like to applaud the gentleman to the front left who cracked out an unforgettable flamenco routine – A for effort. 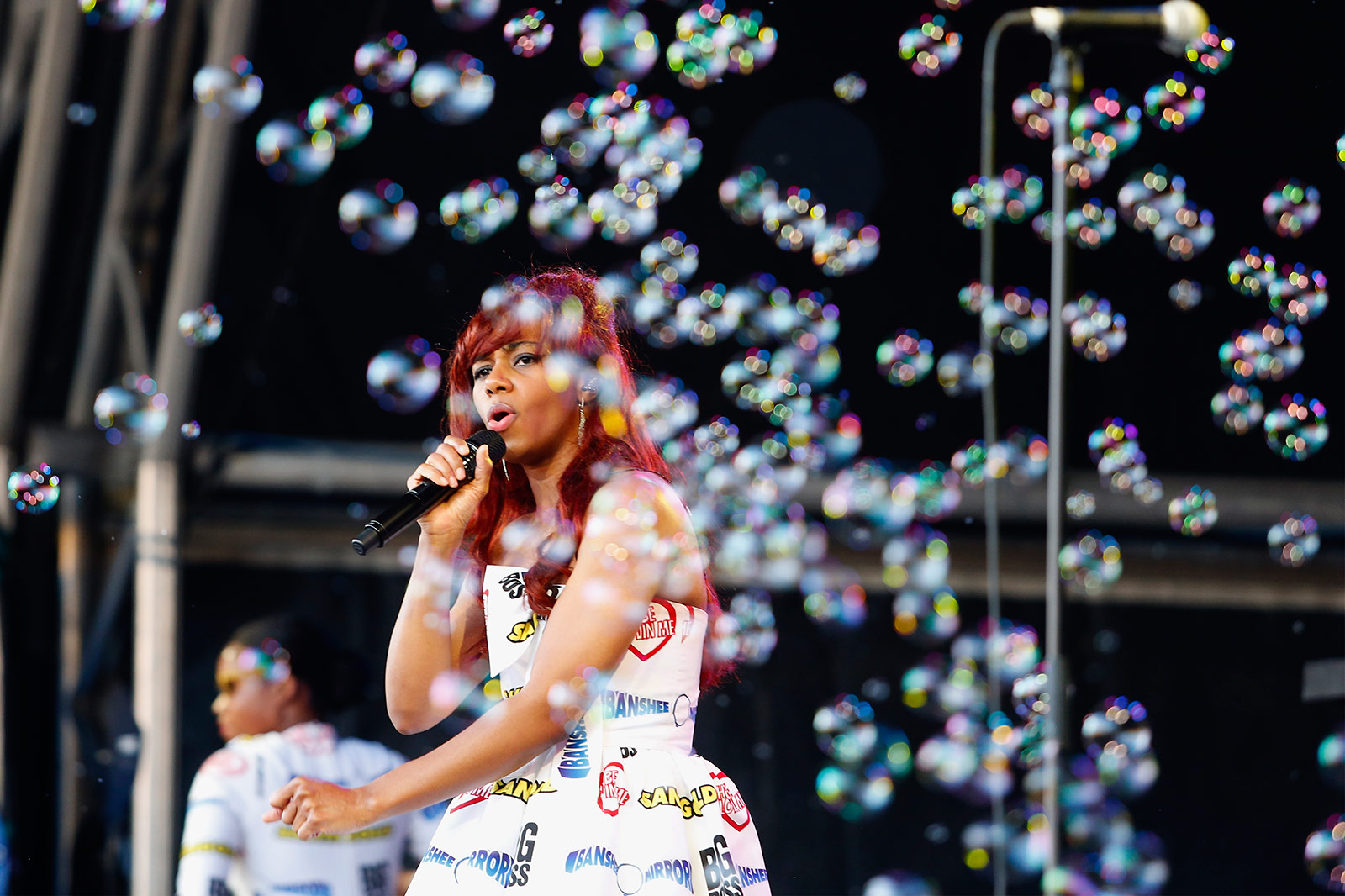 3. The Frontiers of VR Storytelling at Sónar+D

Running as part of Sónar by Day, Sónar+D presented an eclectic program of talks and workshops that offered up expert insight into the industry and the now inextricable relationship between music and technology. A personal highlight for us was a round table discussing The New Frontiers of VR Storytelling, during which Barney Steel, cofounder of Marshmallow Laser Feast, Sam Margolius, producer of Run The Jewels Crown and Jimmy Maidens, supervising technical director at Penrose Studios, discussed the challenges they’ve come up against in their exploration of VR storytelling. Given that the auditorium was packed out and not everyone was able to score a seat, we thought we'd share some of our favourite quotes…

“It’s more akin to theatre than filmmaking…”
“The biggest limitations are not being able to use cuts and close-ups.”
“VR allows you to take away your ears and eyes from your body…”
“It will simulate the world until it’s completely convincing…”
“Introducing smell and touch is what will bring VR to life, it will transform it. Currently we’re just trying to find ways for lots of people to experience it and it’s therefore quite gimmicky, but storytelling is where VR is heading…”
4. ANOHNI and her women

All eyes were laying on her, as she was presenting her new identity live as well as performing the songs of her most recent album, Hopelessness, for the first time; and, what can we say? We felt delighted, bewitched, intrigued and moved by what happened on the stage. Her spectral silhouette emanated a delicate voice that was visually accompanied by the screenings of her friends and collaborators, like Naomi Campbell and Kembra Pfahler. Besides being one of the most sensitive and aesthetically enriching experiences in the festival, the show was a raw political statement on cruel issues such as abuse of power, ecocide of Mother Earth, women's oppression, or death penalty, amongst others. 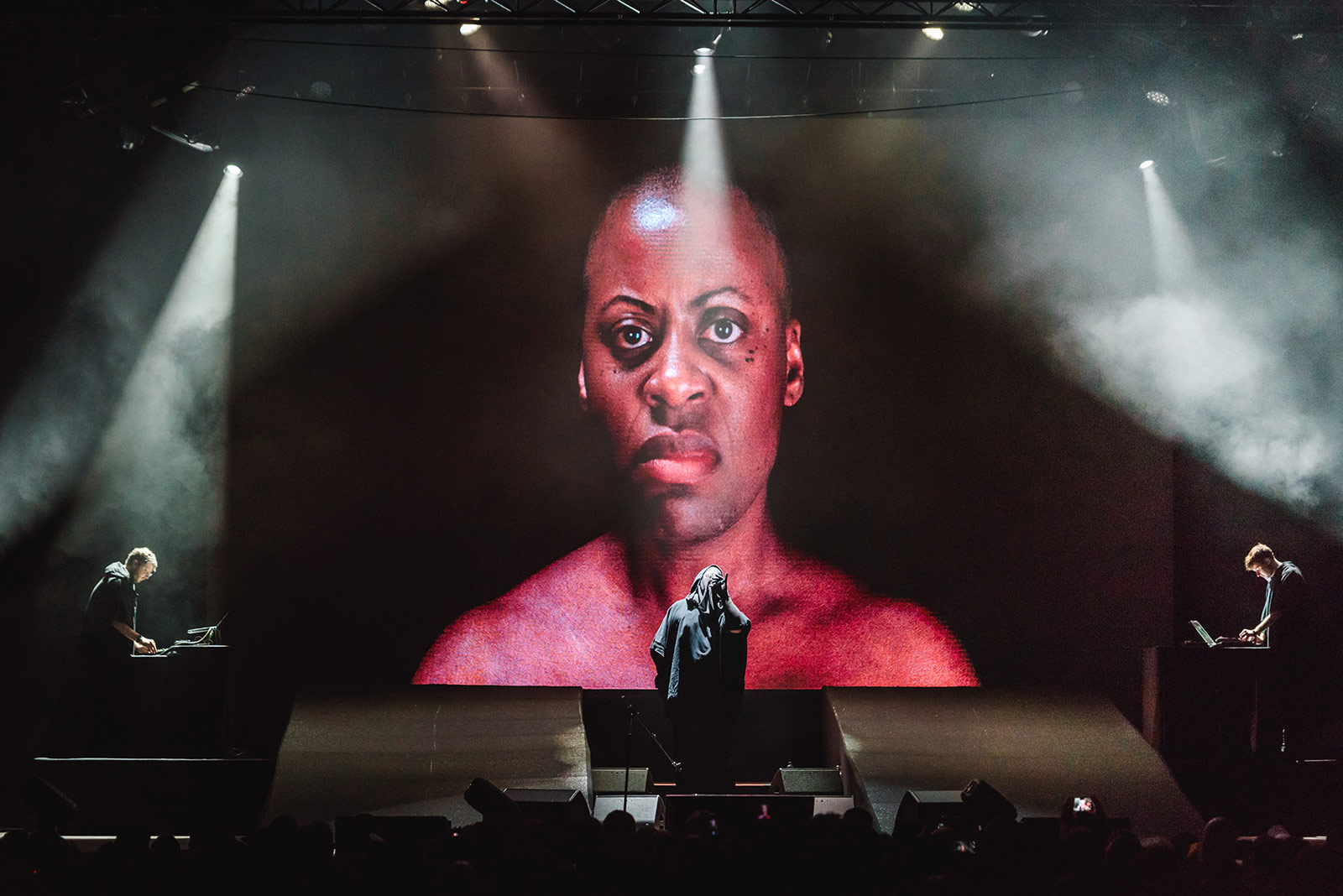 Opting to duck out of James Blake before the end of his set in order to catch this 24-year-old producer at the Sónar Pub stage on Friday night was a tough call, but as soon as Holdin’ On started up and a neon light show kicked in with the bass, we knew we'd made the right decision. Off the recently released Skin, we were treated to songs like Never Be Like You, Say It and Lose It as well as one of his several collaborations with fellow Aussie Chet Faker, Drop The Game. When the show concluded, polite as ever, Flume kindly thanked the crowd for their enthusiasm and revealed that it was his first ever show on mainland Spain. 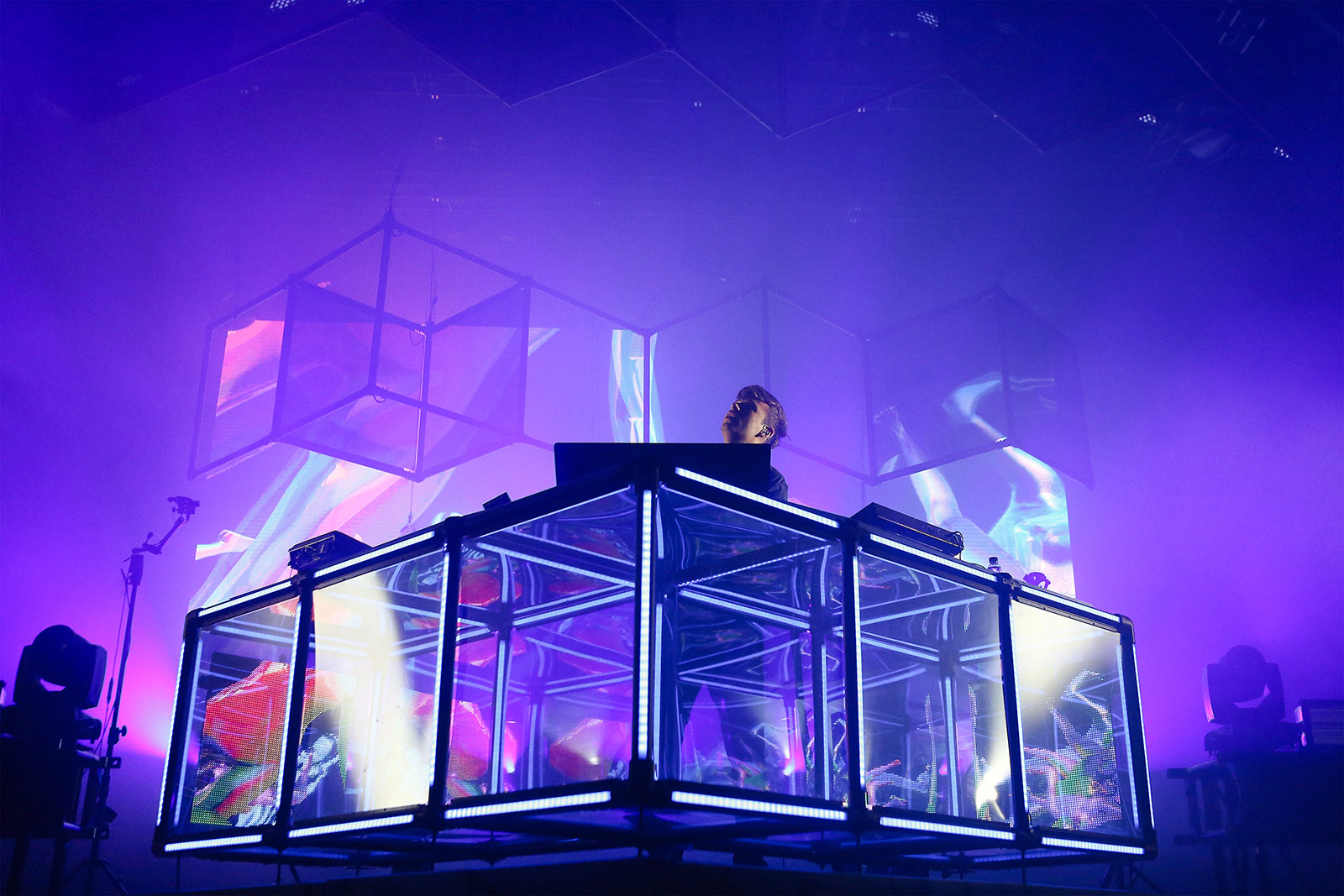 While the group’s new material such as the 2015 release Restless excited the crowd, we were all overwhelmed with nostalgia when it came to their two-part encore, for which they played fan favourite Blue Monday and Joy Division classic Love Will Tear Us Apart. The latter was accompanied by a projection of spine-tingling visuals which included a tribute to Ian Curtis followed by a screen of a starry sky across which the words “Forever Joy Division” glowed. Magical. 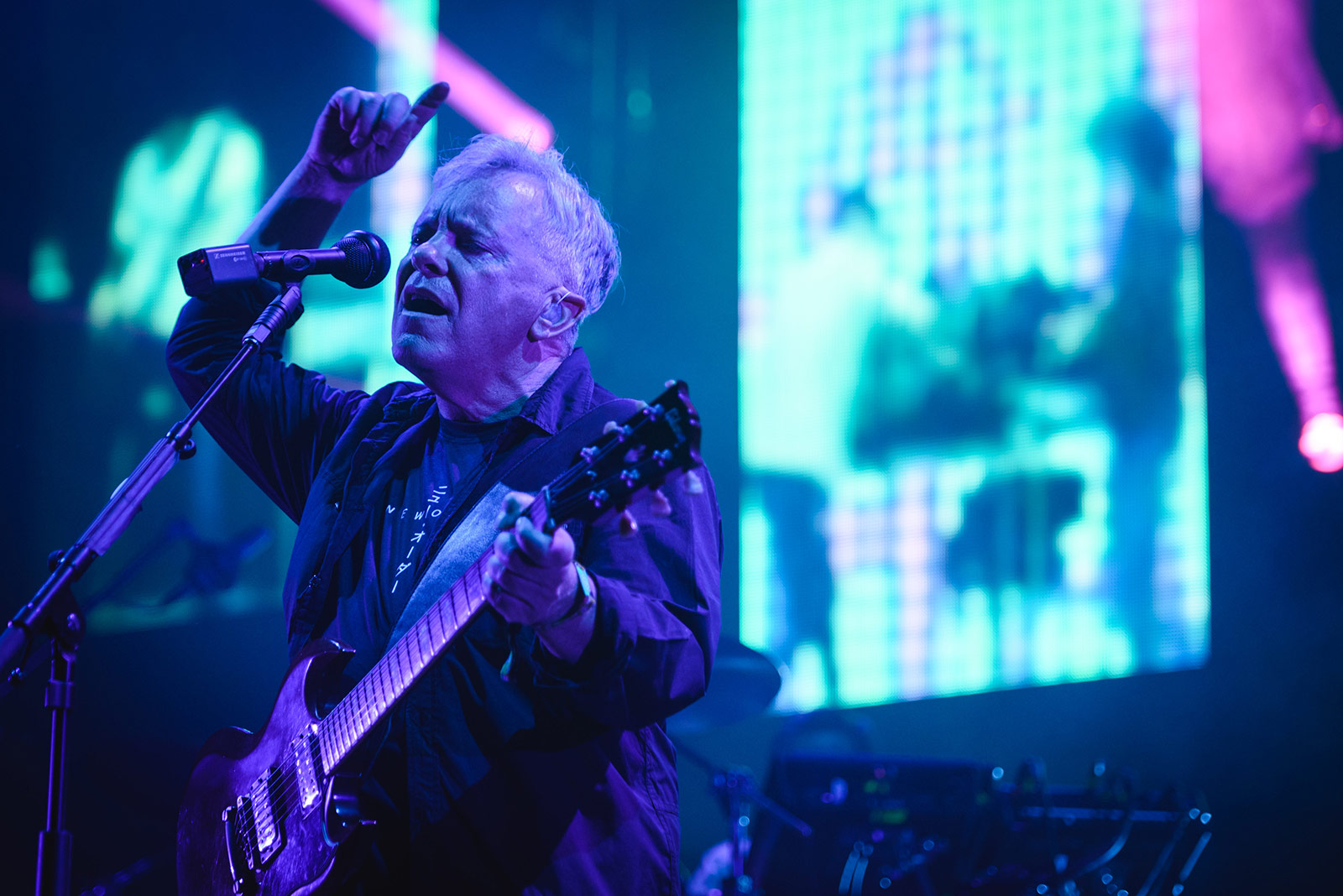 While we were gutted to discover that our two favourite UK Grime stars’s Saturday night slots overlapped, we still walked away satisfied after catching just a few songs at each stage. Skepta and Stormy did Brits proud and showed Sónar exactly why the UK genre is finally being recognised across the pond and around the globe. Their high-energy, fast-paced raps hyped up the masses and had everyone MCing along to the lyrics of top tracks such as Skepta’s Shut Down, That’s Not Me and Stormzy’s Shut Up. 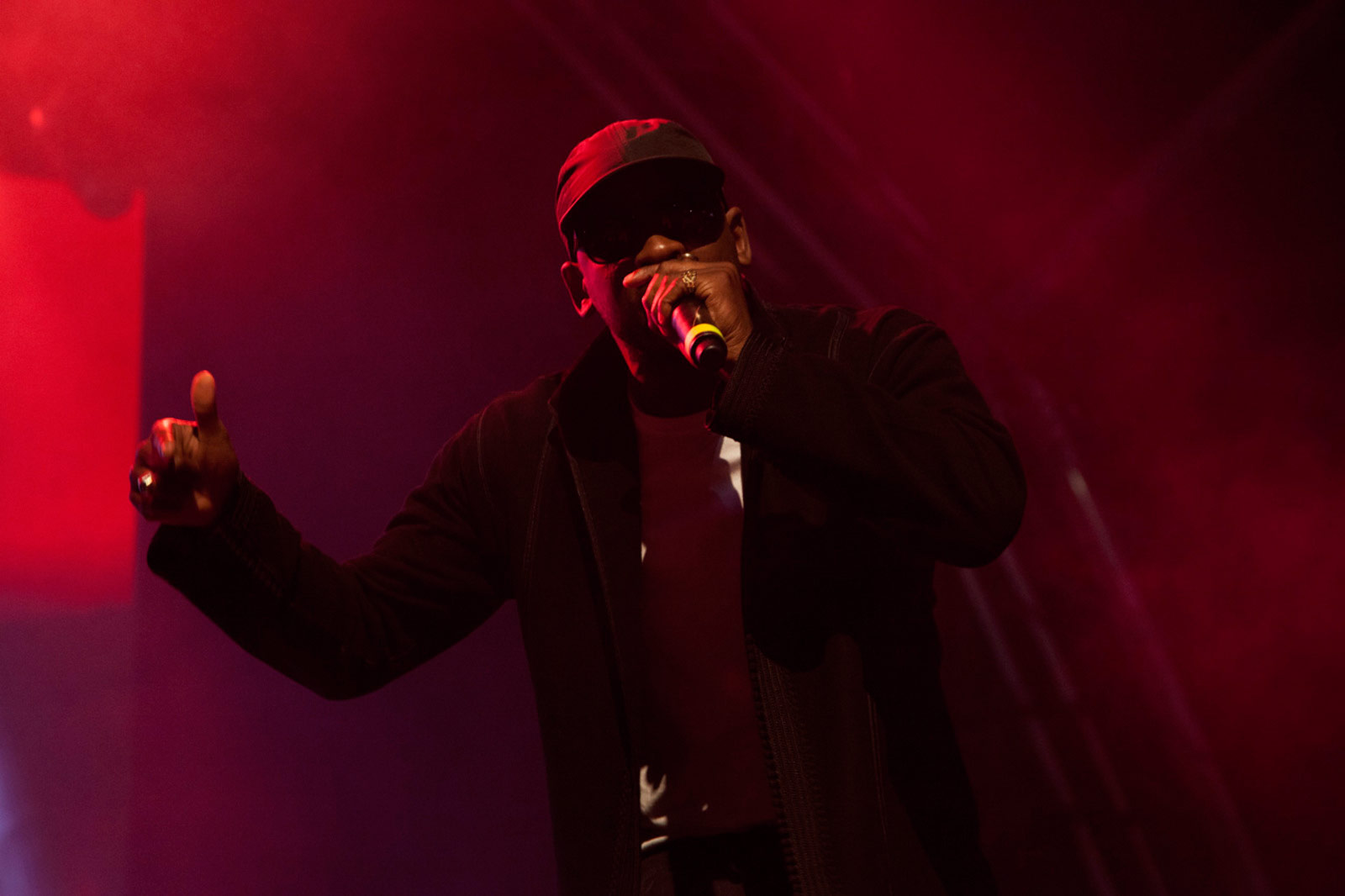 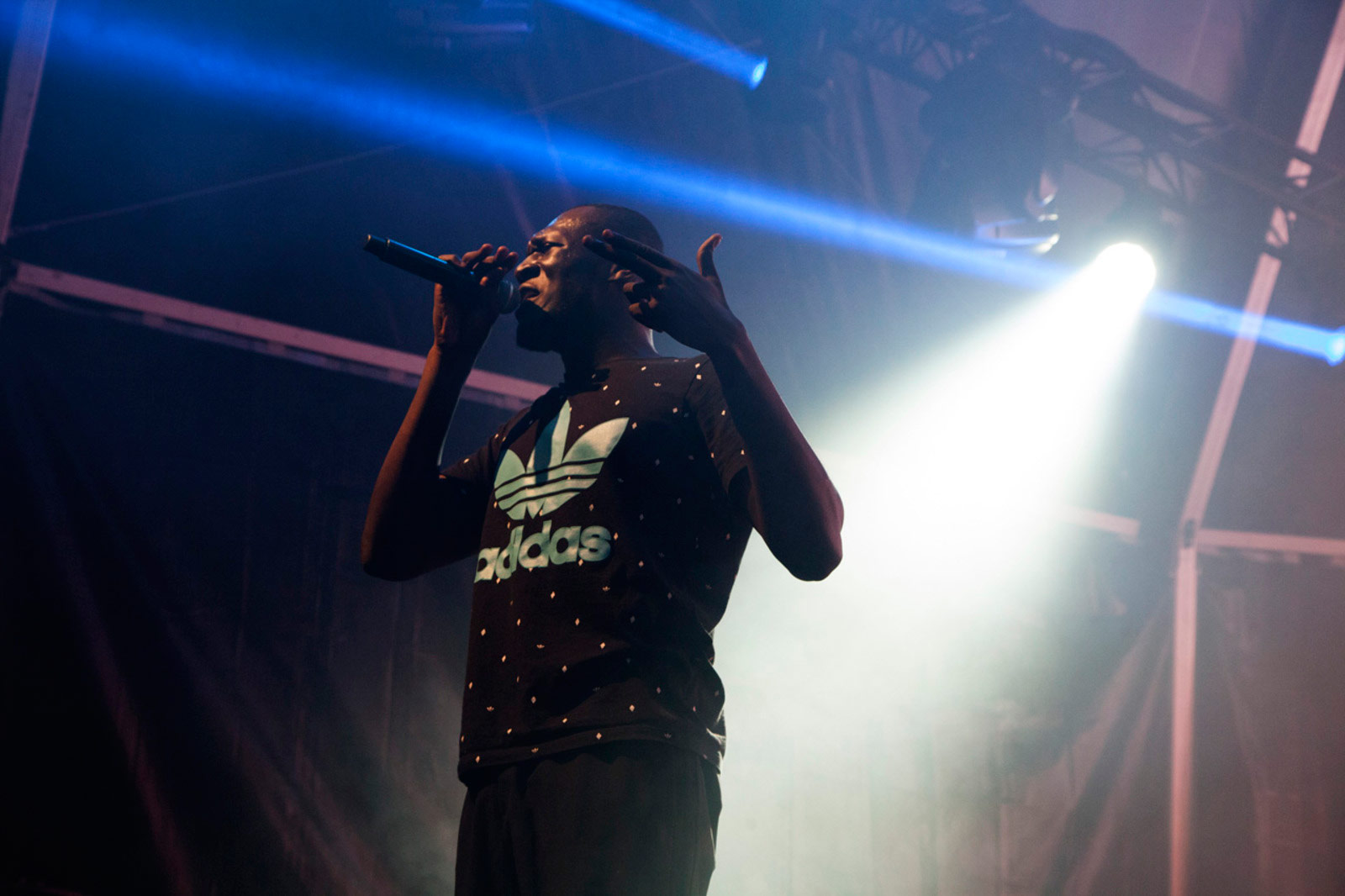 The British DJ and producer was pure energy on stage: he didn’t stop moving and jumping during the whole set. One of the most epic moments of his performance was when he played his song Star 69 along with a screen depicting his face as The Joker, as For the love of God by Damien Hirst (his infamous skull with diamonds), or as a Yayoi Kusama artwork. The setlist also included hysterical remixes of artists such as Etta James, Talking Heads or Prince, that gave the whole performance a sense of eclecticism while, at the same time, remained coherent with Fatboy Slim’s style. 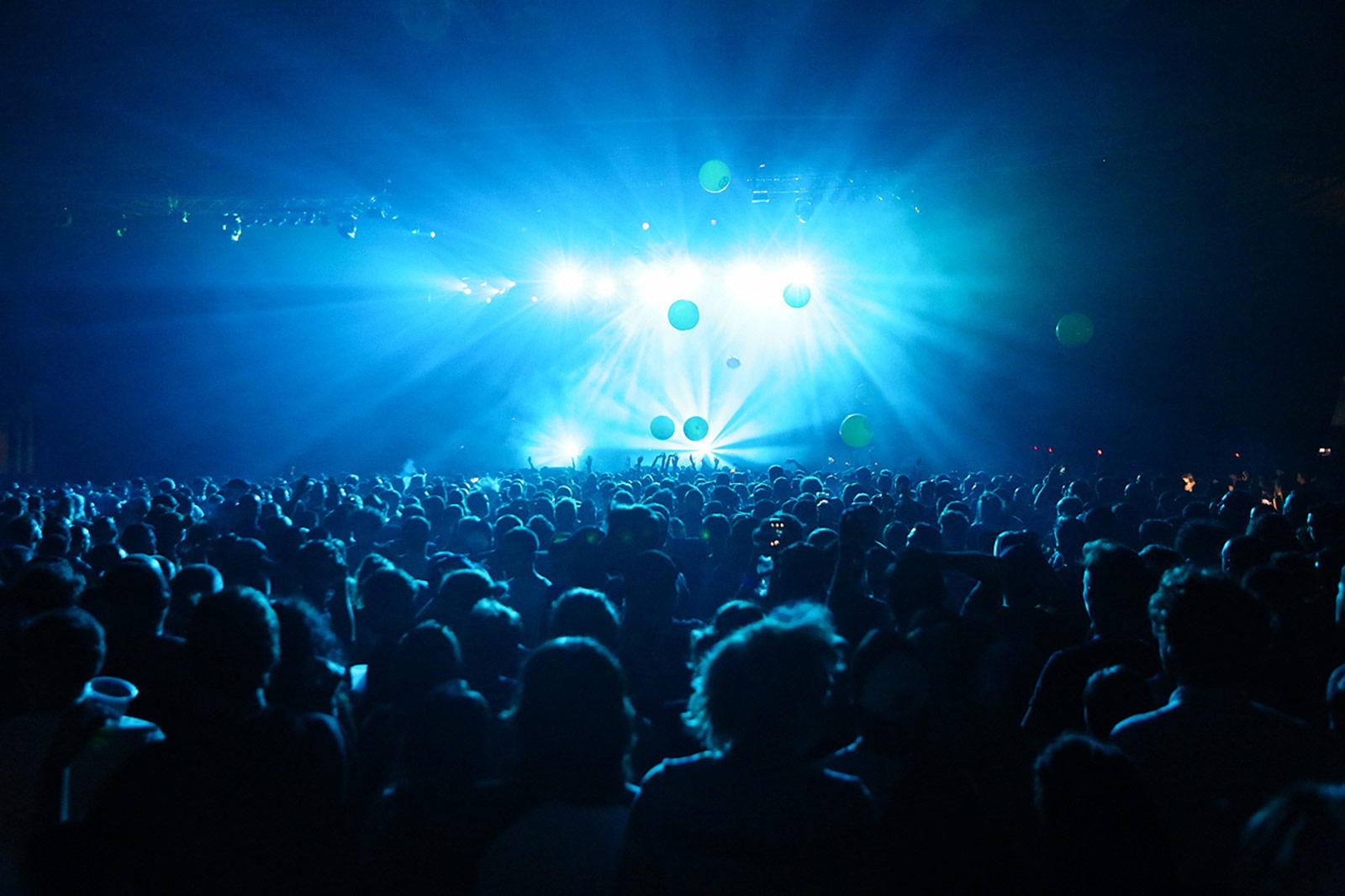 When talking to techno lovers, say that the Spanish DJ has been playing music for “too long” and that he should leave some room for newer talents. Well, we hope they attended his closing performance at Sónar by Night and changed their mind. Paco Osuna is not an old-fashioned veteran; he’s a master who offers mind-blowing sets to an audience that gets crazy with him (specially when all the drinks from the night are running through the blood). His closing set was full of kaleidoscopic visuals, dark techno and people having the time of their lives at the festival until next year. 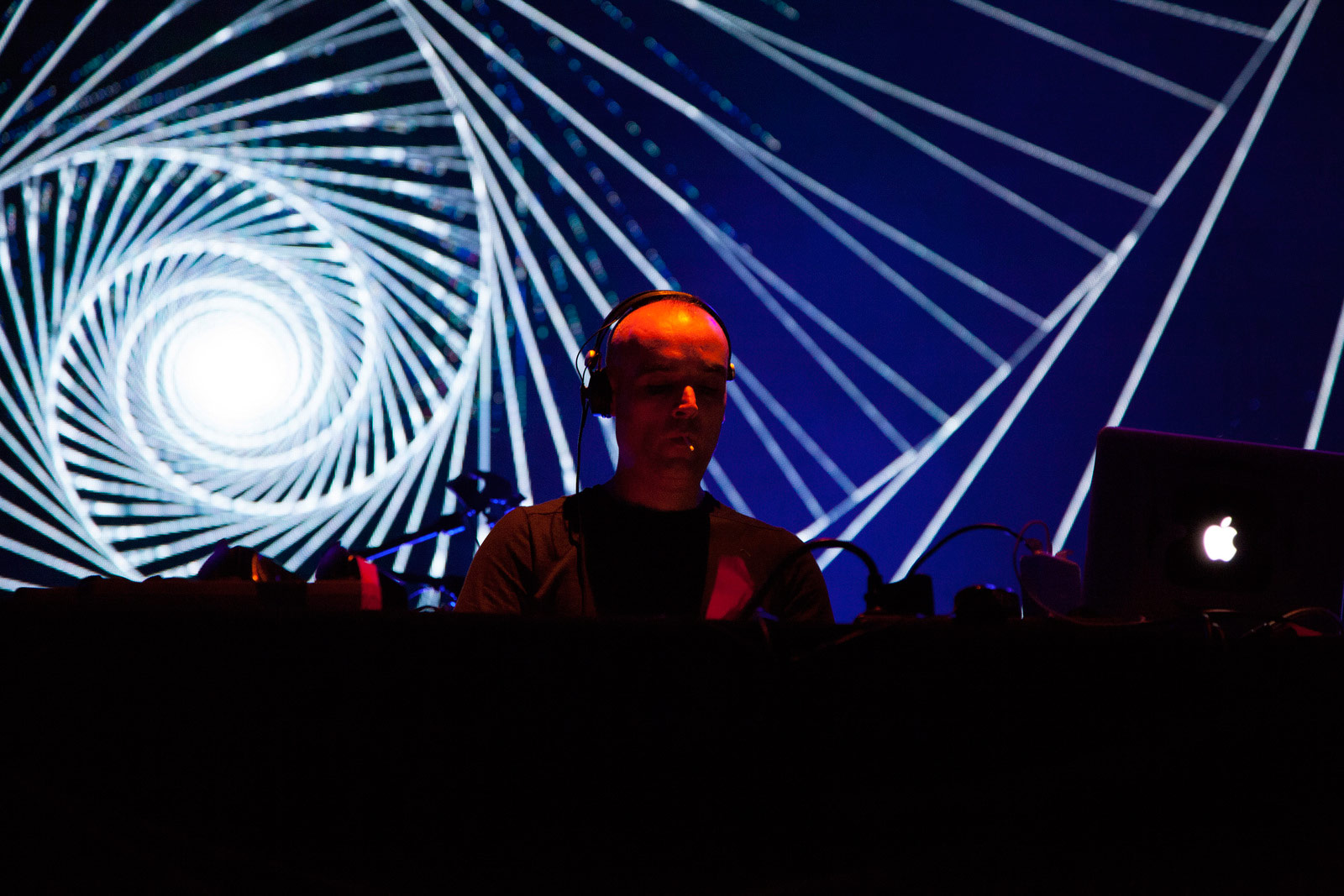