The vulnerable beasts tampering with tradition 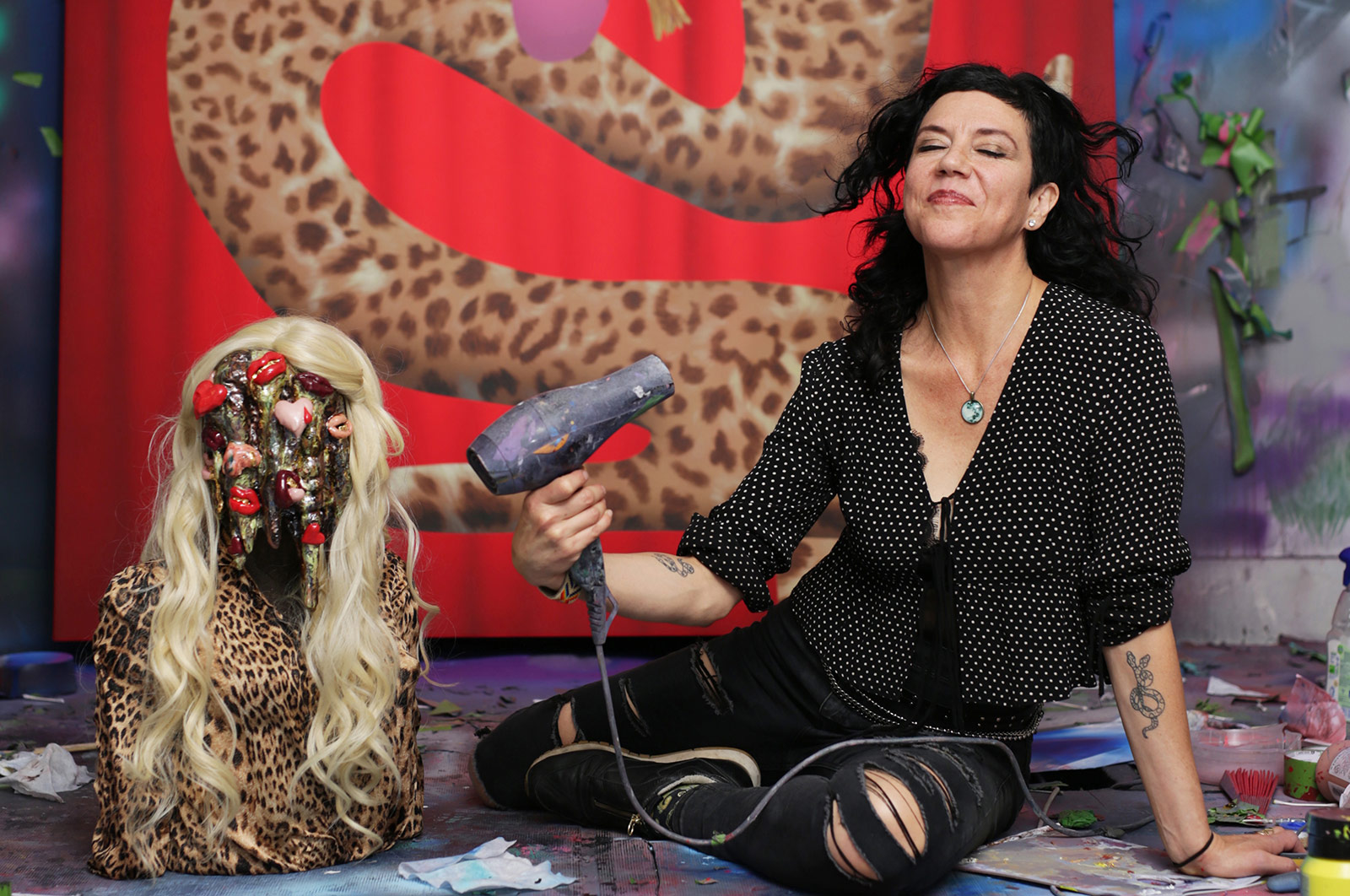 The ceramics of Roxanne Jackson appear in three group shows this spring, fusing recollections of memory, mythology and mysticism with a healthy dose of wit. Miami’s Fairyland show at Mindy Solomon Gallery, as well as New York City exhibitions Magic Touch at Dinner Gallery and Nature Morte at The Hole purify blemish in their displays of beasts; a set analogous in spirit. Hers are concocted creatures that propel the decorative arts on in their unnatural enticement to touch. Claimants of the anti-masterpiece both recognising and rupturing tradition.
Responding to preconceptions of ceramics as an innocuous pastime and frivolous kitsch, Jackson employs strength in irony, sculpting chimerical beings abrupt in detail. For Fairyland, she expands upon her series of lip vases with two news vessels titled Baby Goth and Teen Angst.

From a distance, you’d be mistaken for thinking of these pieces as opulent heirlooms; an abstract leaf pattern cascading down the length of the neck. On closer inspection, however, their audacious brutality takes precedence. Emoji-like mouths with puckering lips and protruding tongues allude to the unsustainable overconsumption of pop culture whilst the gold teeth they bare reclaim referential roots.

Through gilt frames and rhinestone adornments, Jackson imbues personal signification, one that relates to the Mexican customs of beautification in dentistry in her paternal ancestry. Many modern Mayans, Mexicans and other indigenous cultures of South and Central America still practice tooth adornment. Jackson situates this custom within new contexts. She explores these aesthetic practices now from the experience of growing up with a Mexican-American father and uncles in California’s East Bay. 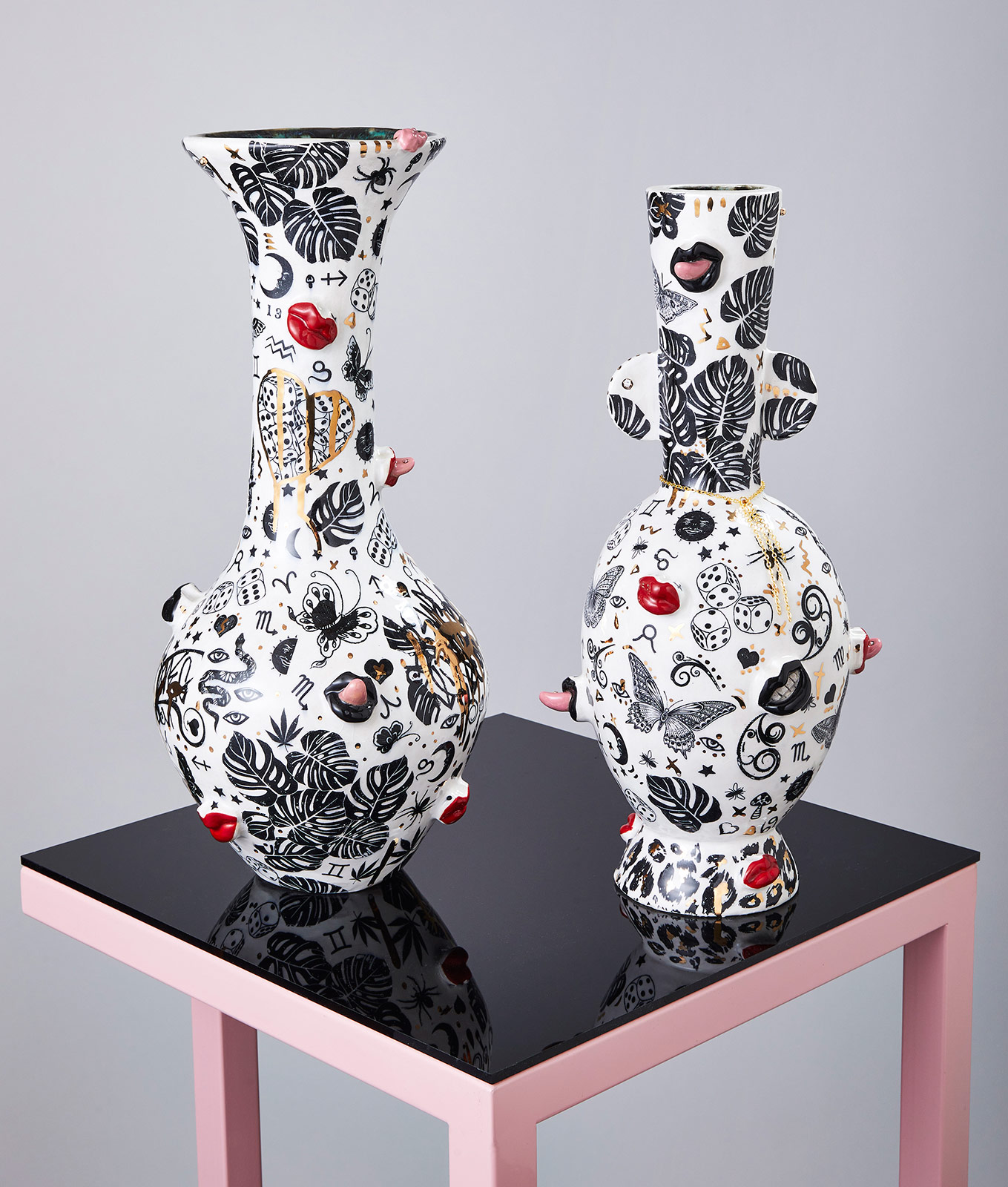 Cobbled together are a miscellany of motifs that similarly expose the work's semantic dualities; ace of spades, astrological signs and rolling dice that live in their reminiscence of tissue. Applied with found and manipulated decals, the decor personifies the work, hinting at the modification of the body.

A graffitied Pinto station wagon belonging to her brother Zach was another source of visual stimulation from her formative years. Drawing on its covered surface to consider more widely our interaction with numerous facades as a canvas for ornamentation. Where Jackson seeks parallelism, she also finds polarity, stimulating interplay through a hotchpotch of ingredients that appear as a metaphor for the anachronisms of contemporary lifestyles.

Shifting parameters of good and evil; heaven and hell; conscious and subconscious, two plaid head sculptures Cry Baby and Pure Lust, exhibited as part of the group show Magic Touch, depict conventionally nefarious animals which in religion have been affiliated with the devil, namely the bat and the goat. 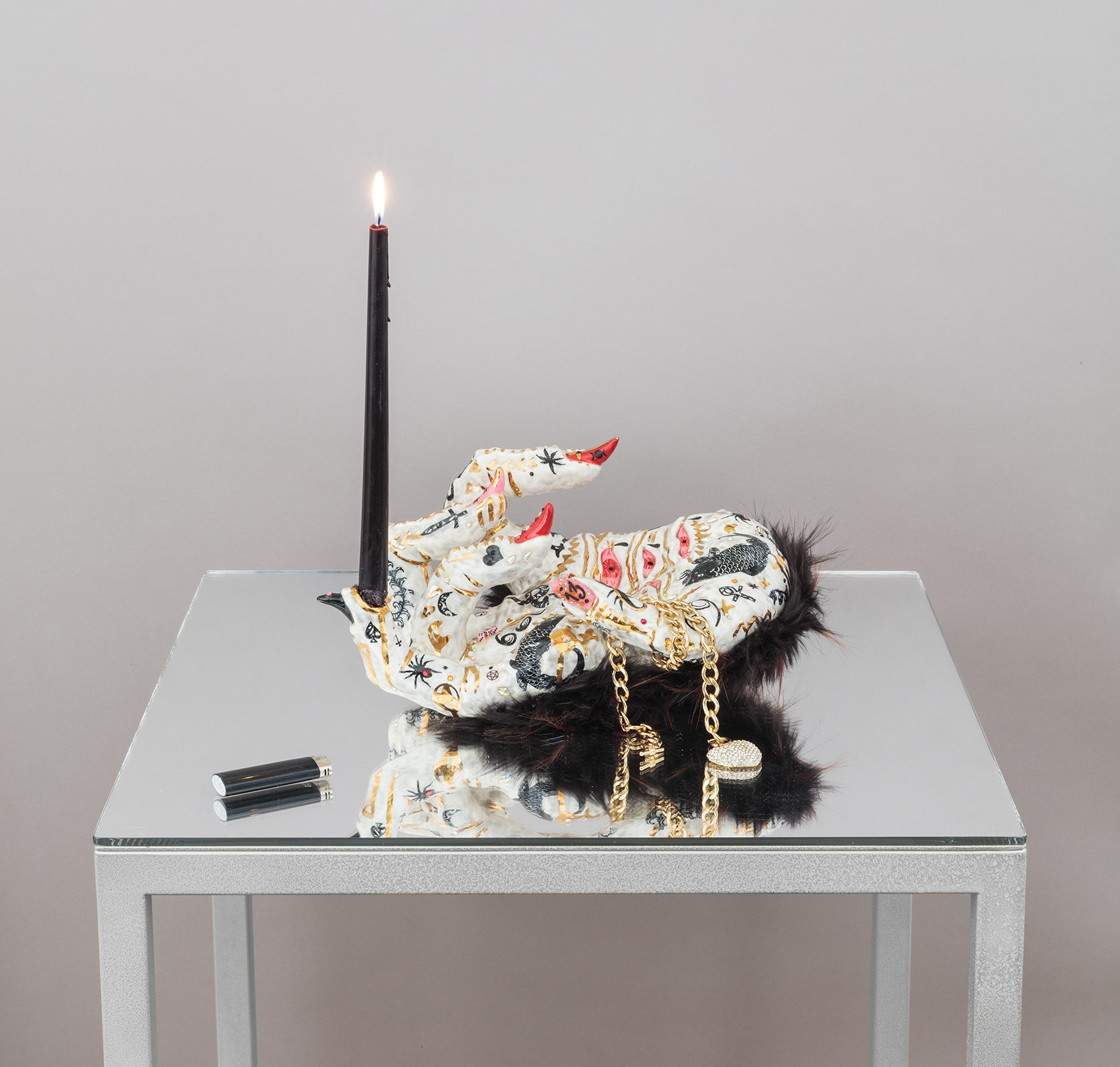 Having grown up in a family of extreme Evangelical Christians, Jackson relishes in the chance to obscure otherwise sacred imagery. Mounted upon white walls, she presents the hybrid in a state of completeness and dismemberment alike, applying an alchemy of glazes which, in Jackson’s droll spirit, makes tolerable the peeling flesh of the severed head.

In Black Flame, she unearths the final stage in a transformative cycle of life and death. A human skull emerges from within the sliced cranium of a reptile, jarring in a psychedelic palette of iridescent sheen. She envisions the third step of her plaid heads as a phoenix rising from the ashes, a burst geode unveiling a restored glimmering soul and a synthesis between humans and nature.

Jackson’s brother Zach raised reptiles; when she was 23, he was murdered, leaving behind an aquarium of chameleons that starved to death. Years later, when Jackson was at Vienna’s Natural History Museum, she saw preserved chameleons in jars in the Herpetology display. This triggered her memory of witnessing the aquarium with emaciated reptile bodies — a memory previously blocked out due to the traumatic event. 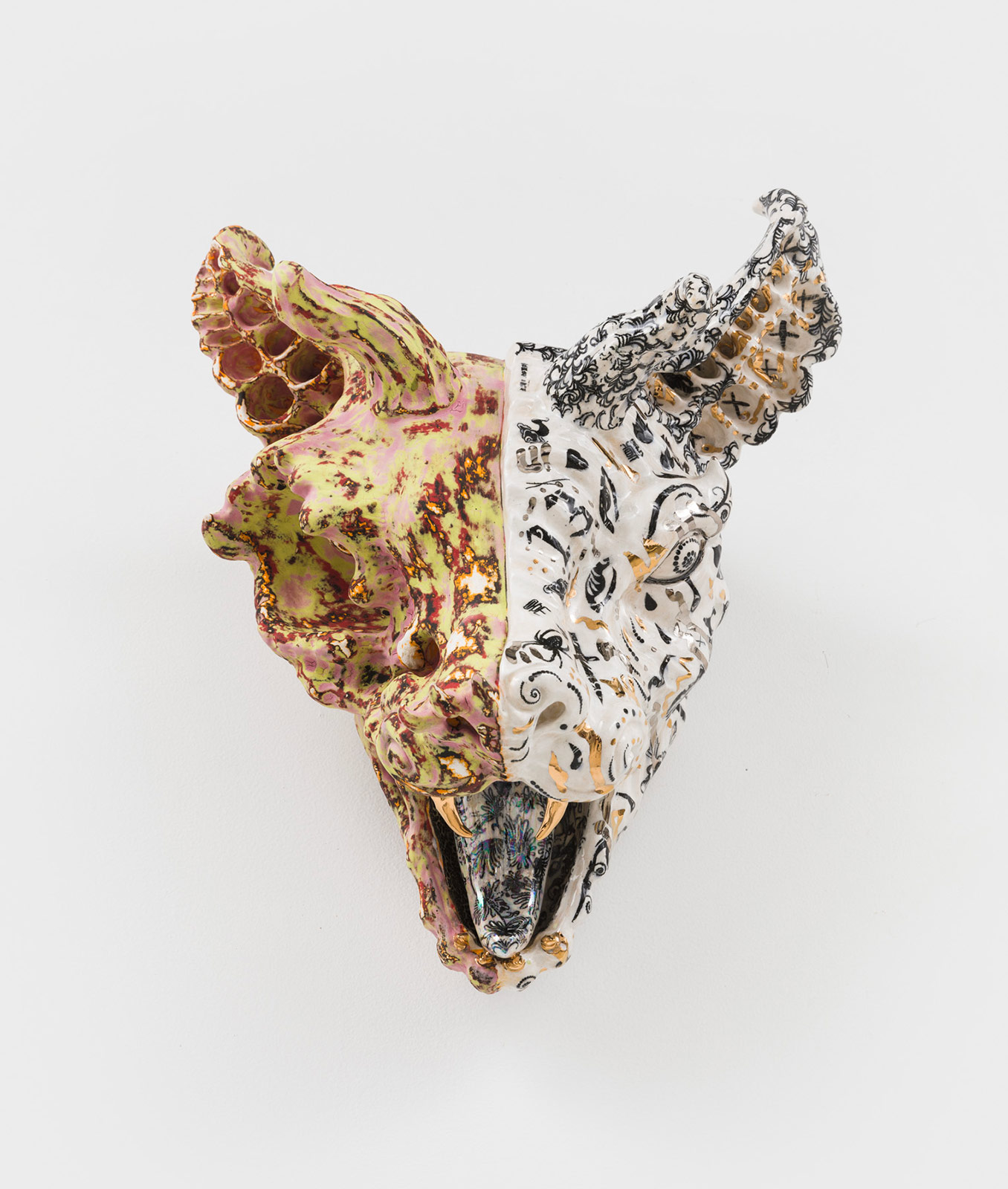 This recollection inspired her to start working with the reptilian image. The saurian form of the work then becomes suggestive of a cathartic creative process; they are regenerative works that expressly suggest rebirth and immortality.

These shapeshifters of vitality offer a means of escape by exposing a connection with the inner self. Recurring emblems such as the pearl are polysemic in their symbolism, interweaving notions of creation with consciousness. In Pure Lust, incandescent spherical masses reside amidst folds of skin whilst in Black Flame, the formation of black pearls bubble under inky husks.

In bisecting the head, Jackson defines the location of the soul itself. The pineal gland appearing as a central kernel that belongs to the juicy pulp of the cerebral cortex, where memory, perception and thought populates. Situating the pearls within and without, she intimates a heightened acquaintance with our psyche through frangibility. An openness and awareness of our prejudices that contemplates myth and the intimacy of existence. 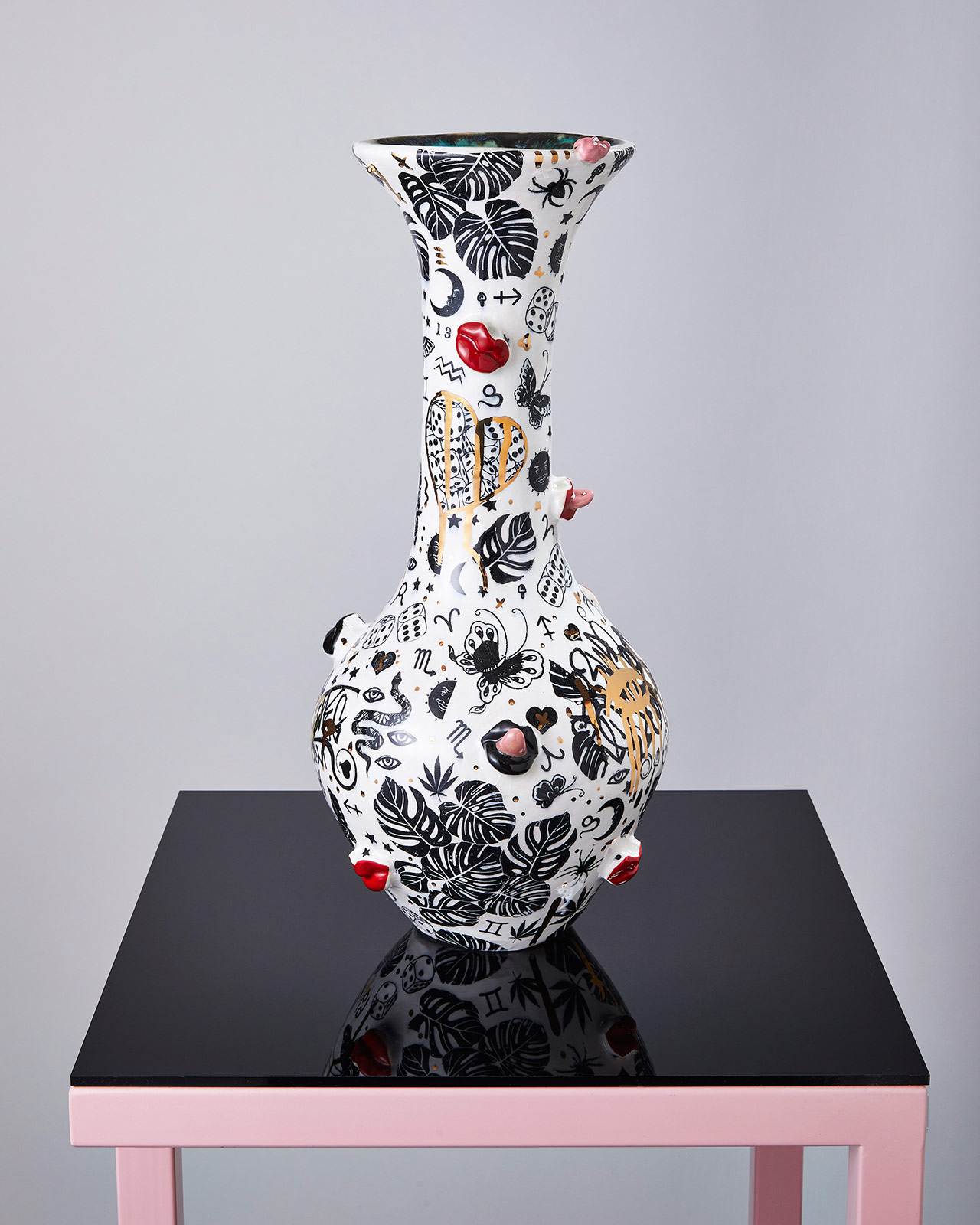 In the seam of the playfully profound and the gracefully grotesque, Jackson holds a space amidst the gloomy realities of the everyday. In a piece titled Epic Pandemic Phoenix Too (also known as Nessy) shown as part of the Nature Morte show, collected fears consolidate in a curious chimaera.

Built with artist Jefferson Nelson and Jackson’s largest piece to date, Nessy combines discernible features from the Loch Ness monster, rattlesnake, scorpion, shark and stingray. The pink underbelly and six udder-like breasts simultaneously infiltrate our collective notions of the feminine, calling on the horror film trope of the Devouring Mother to design an alternative mythology.

Monster paw Sweet Tooth caricatures in vogue manicure culture with its cherry painted talons, whilst palms bedecked with third eyes in Blackhearted make a nod to occultism and the history of witchcraft. These beasts feel distinctly womanlike. Incarnating the intuitive properties of clay, she offers a distorted rendition of beauty, one that contests traditional sentiments and seeks refuge in the bulbous contours of her ceramic sculptures. 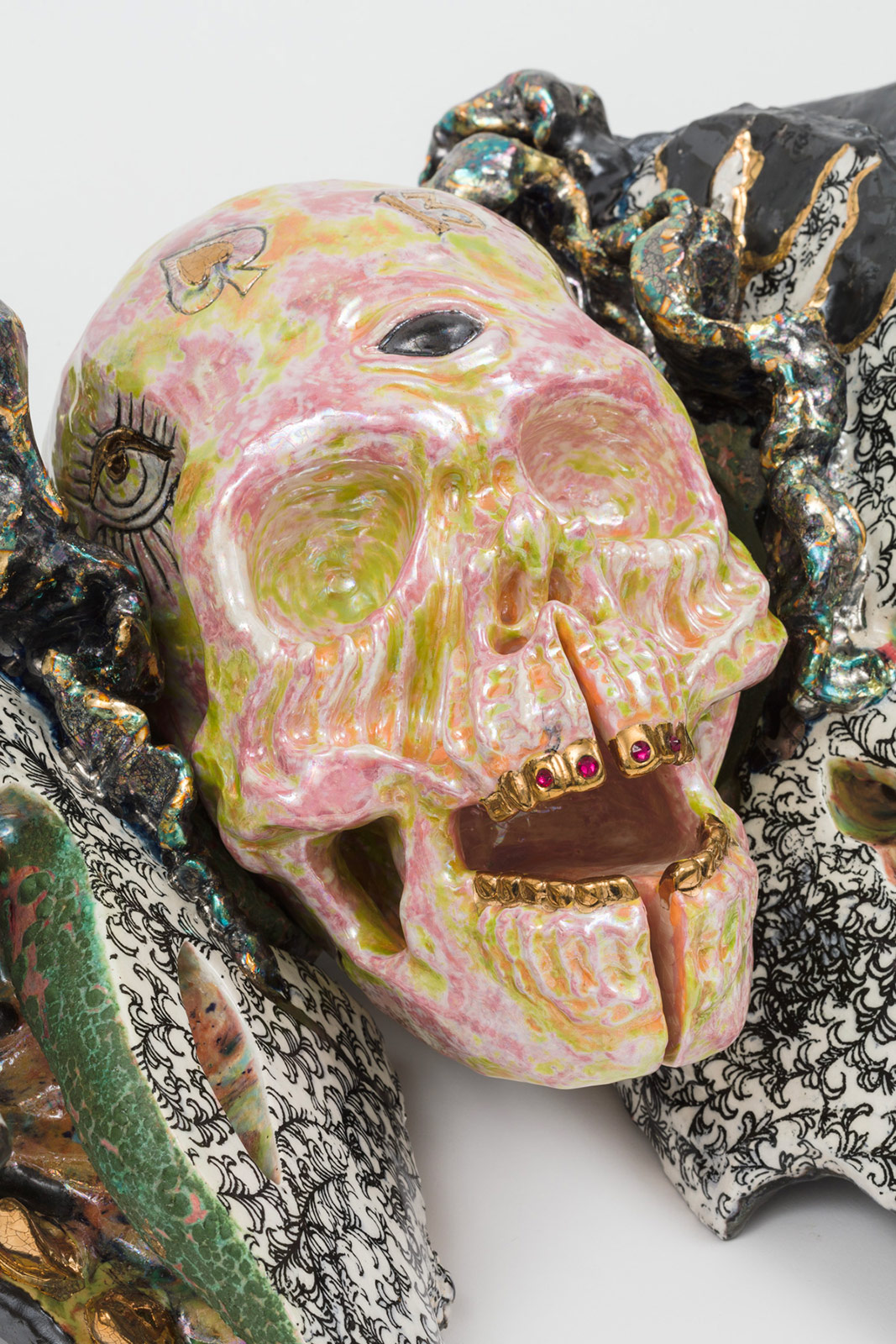 Finding form in flowers and shells, the presence of the female anatomy in several of Jackson’s works perhaps more explicitly probes at this synonymity of woman with the other. Though we’re led to believe that her creations are mercurial beings, without boundaries, embedded throughout this latest series are equally subtle and conspicuous emblems of femininity that proffer insight into the complexities of what it means to be female.

Melding multiple aesthetics with an intention to keep craft current, Jackson is constantly chasing the mysterious. Casting spellbinding ingresses that bridge the chasm between the real and the quixotic. The abject nature of her pieces invites us to consider the symbiotic relationship we hold with nature, the mysterious, our psyches, our bodies and the supernatural. We acknowledge that both our mythologies and ourselves are in a constant state of flux, susceptible to metamorphosis.
Roxanne Jackson’s group exhibitions Fairyland, and Magic Touch are currently on view at Mindy Solomon Gallery, Miami until April 17, and Dinner Gallery, New York until May 9, respectively. Her group exhibition Nature Morte will be held at The Hole, New York, from April 8 to May 9. 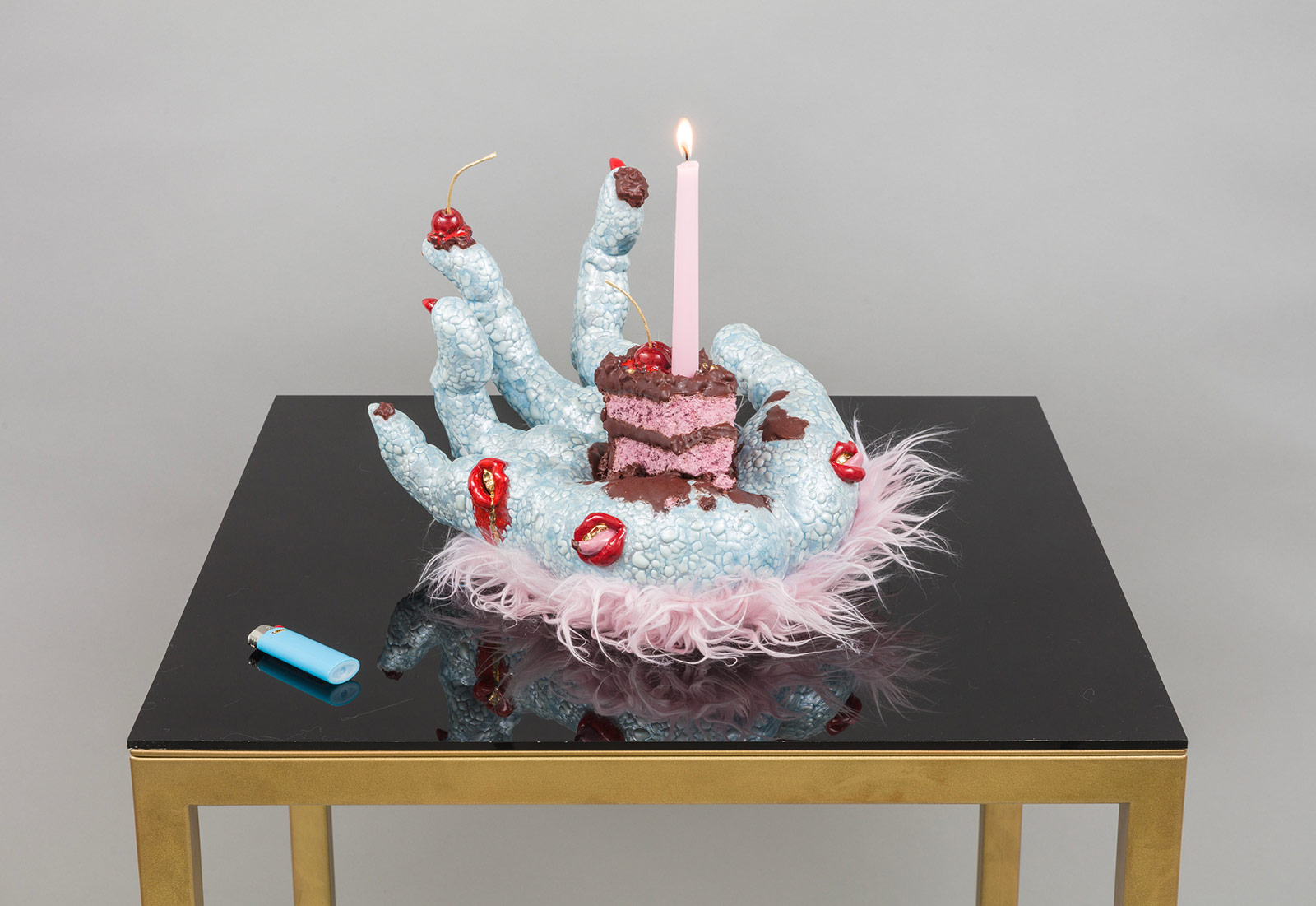 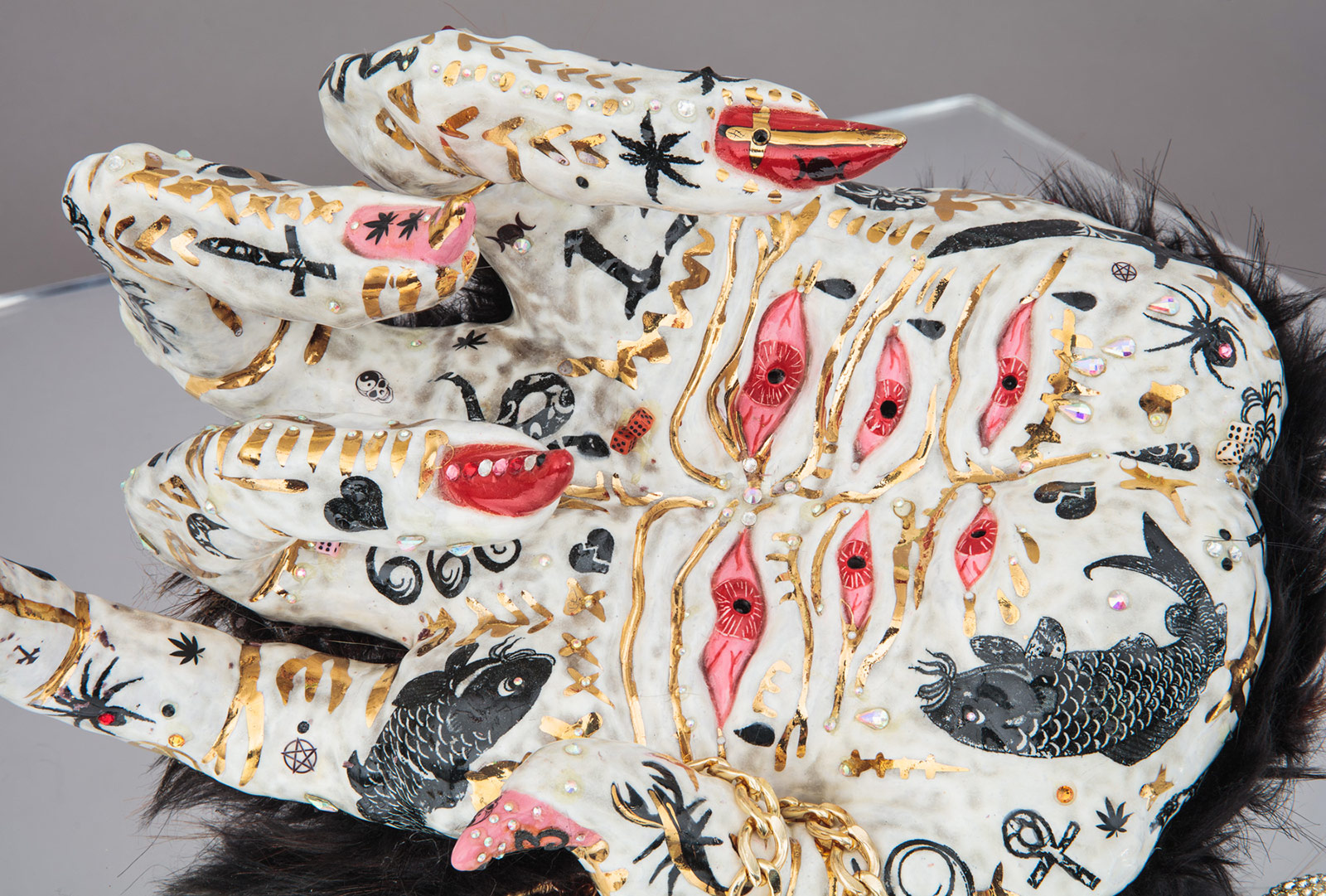 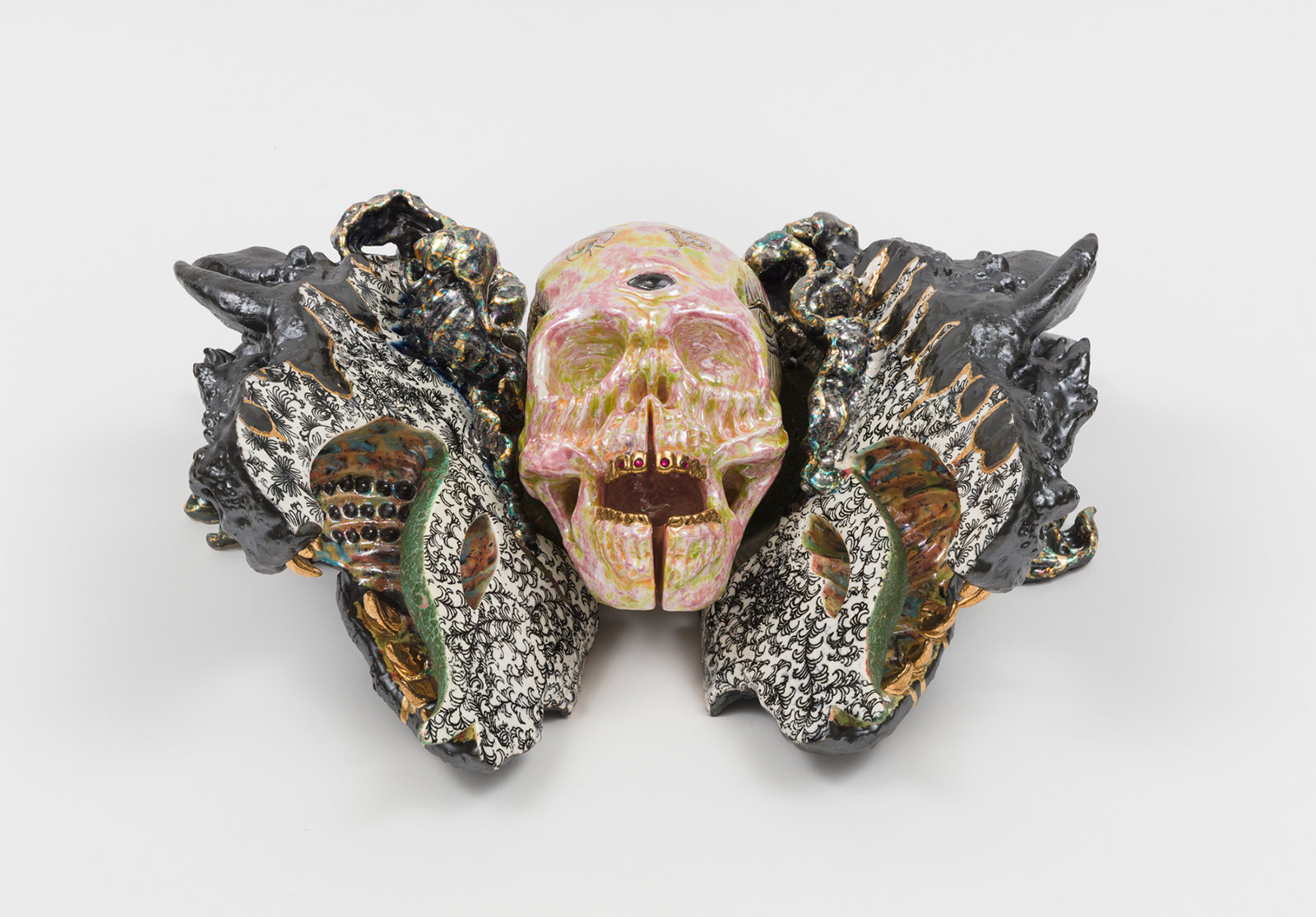 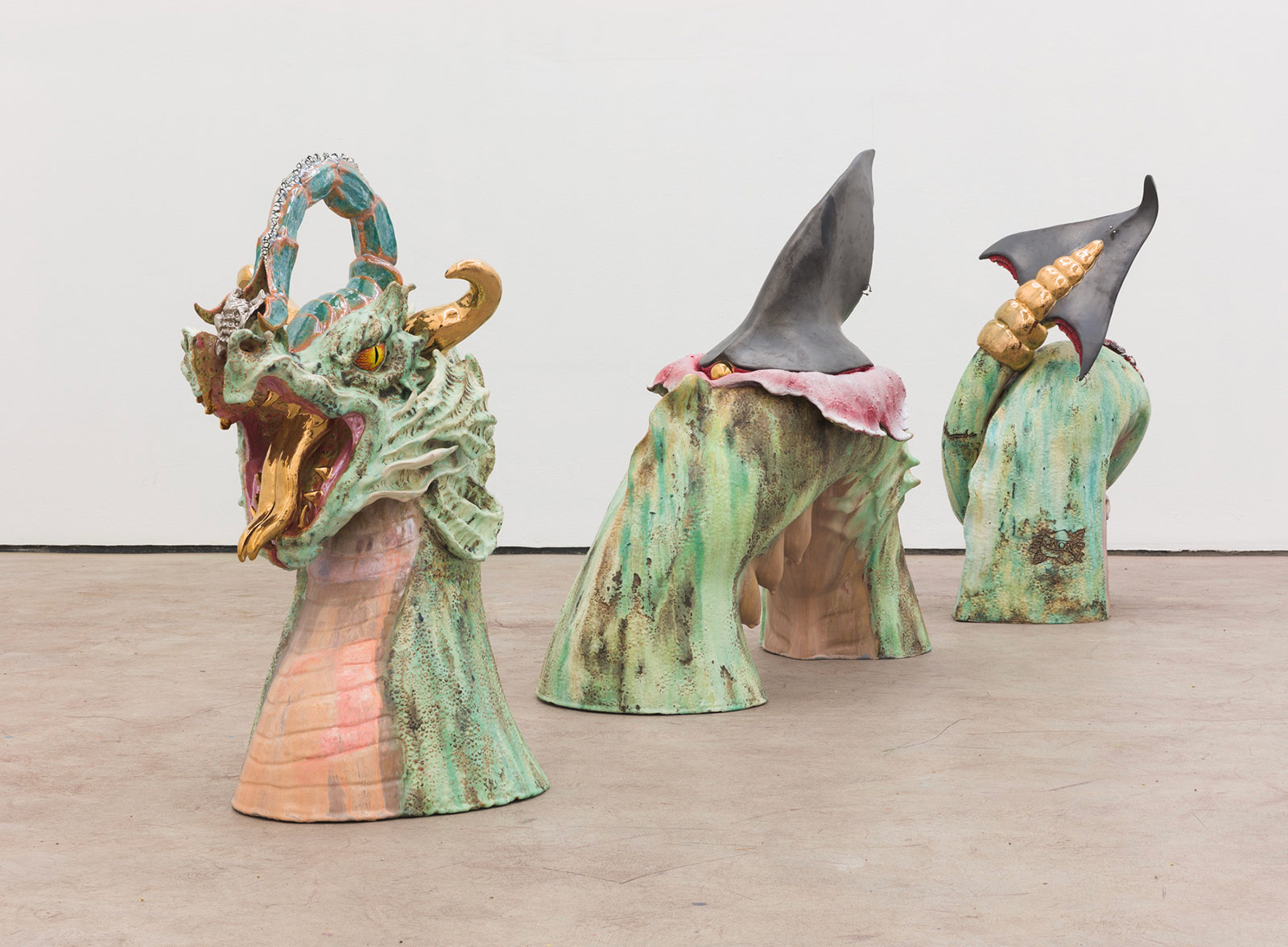