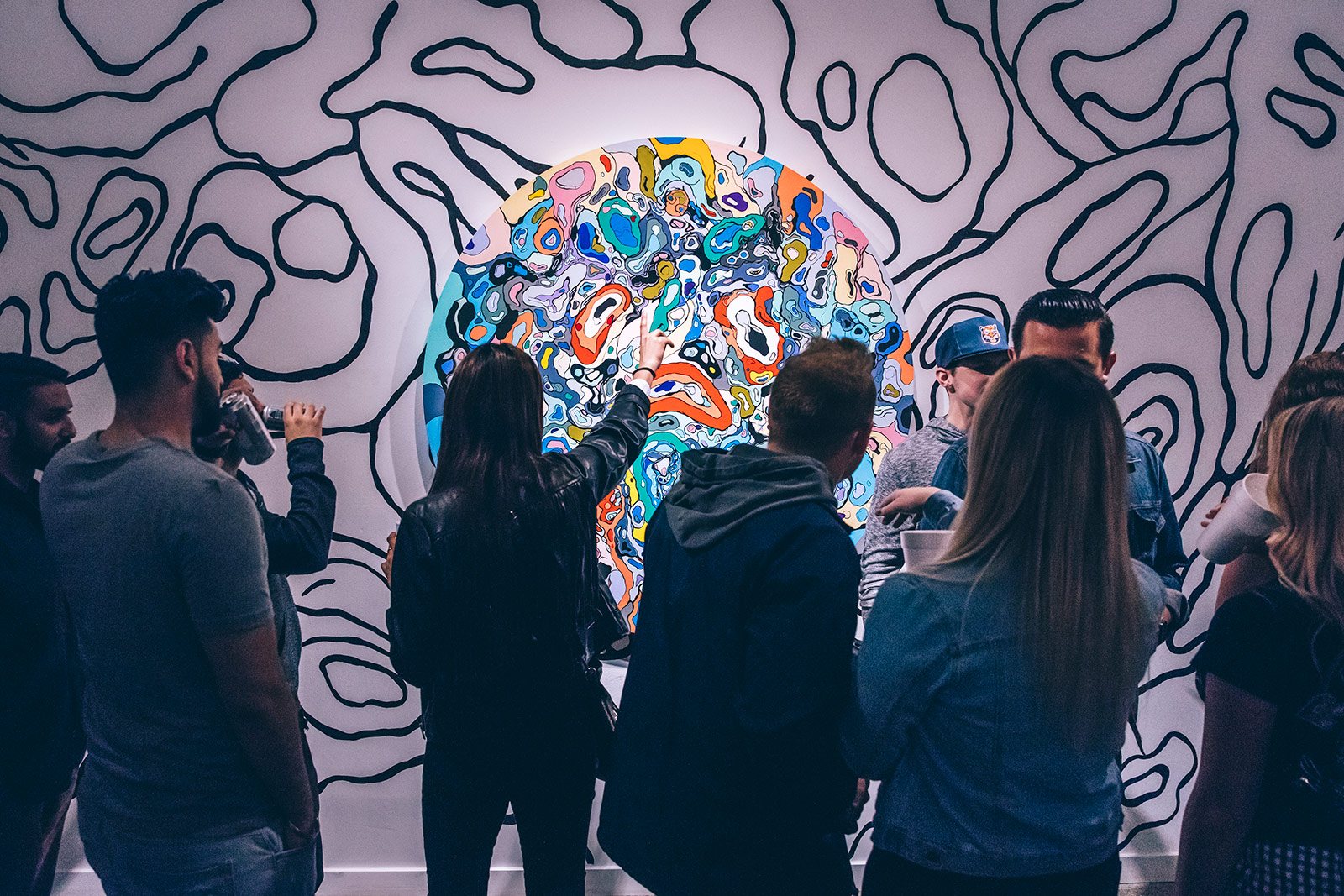 Launched five years ago as a residency program for local artists, the Red Bull House of Art has evolved into a project housing three artists at a time, for a period of three months, and it happens three times a year. After all, they say good things do come in threes. The artists live together in the space, work onsite with their resources provided, and all work produced during the residency program remains that of the artists to do with what they wish.
Once the fourth largest city in the states by population, Detroit is the only city to host Red Bull’s House of Art. Between the late 50s and the early 60s, the city with an endearing commitment to singing the praises of its auto industry was silenced by an unwillingness to diversify into other industries. The city became a victim of its own success and as technology advanced and auto jobs moved elsewhere, the city had no back-up industry to step into the big shoes that laid empty.

Although the gentrification wheels have started their turning process in Detroit, it’s a city with juxtaposition and contrast hidden in every last nook and cranny. Endless streets are lined with run-down abandoned houses, and desolate high-rise buildings give a sense of a utopian ghost town. Yet, you enter the Easter Market area where the city’s art scene is developing to find building after building consumed by murals and a neighbourhood reimagined in technicolour. It’s of course the motherland of Motown, but it also gave birth to the contemporary techno scene before it was adopted by a new step mum called Europe. Whatever you find in Detroit, it’s sure to churn out the complete opposite in some way or another right before your waiting eyes. 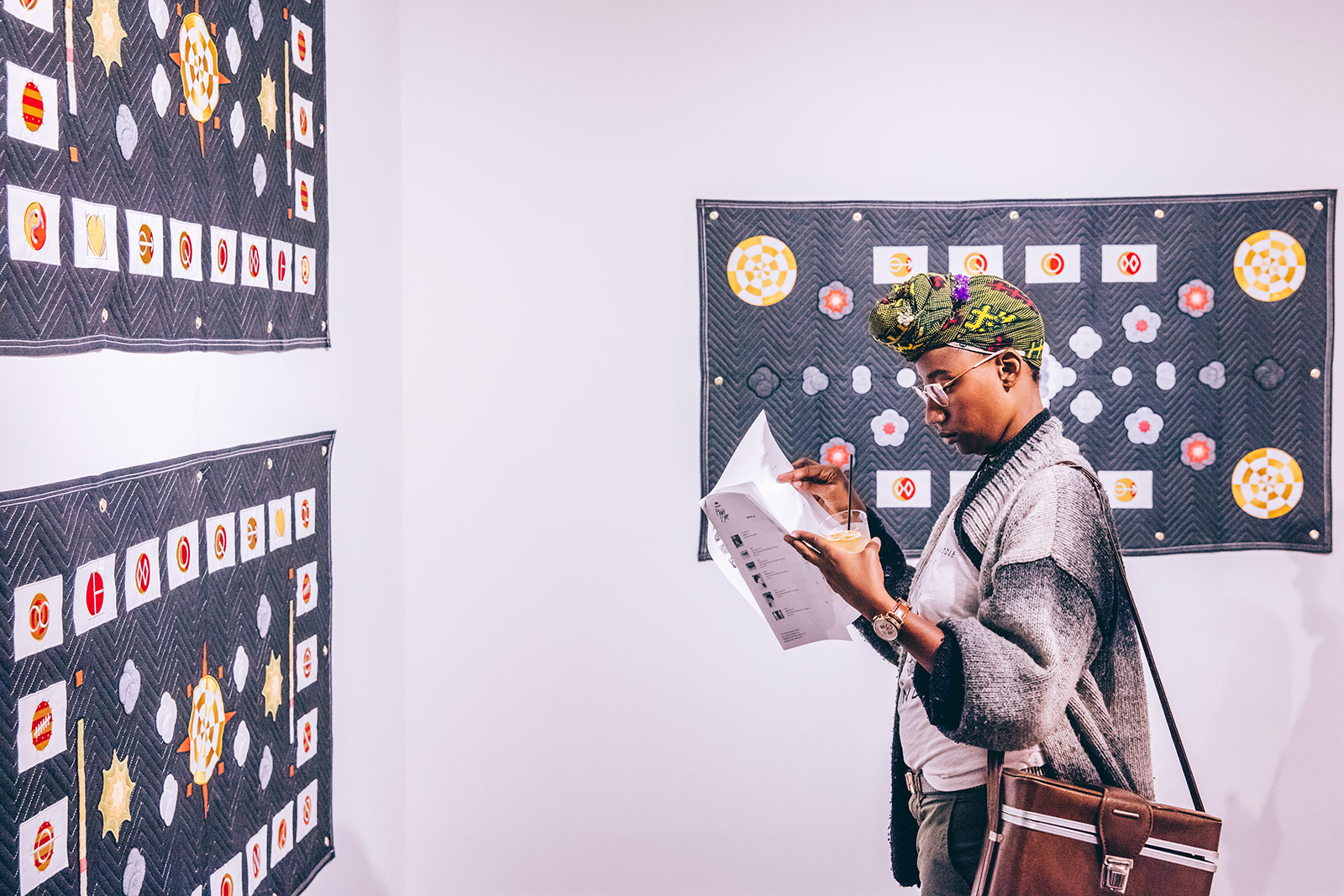 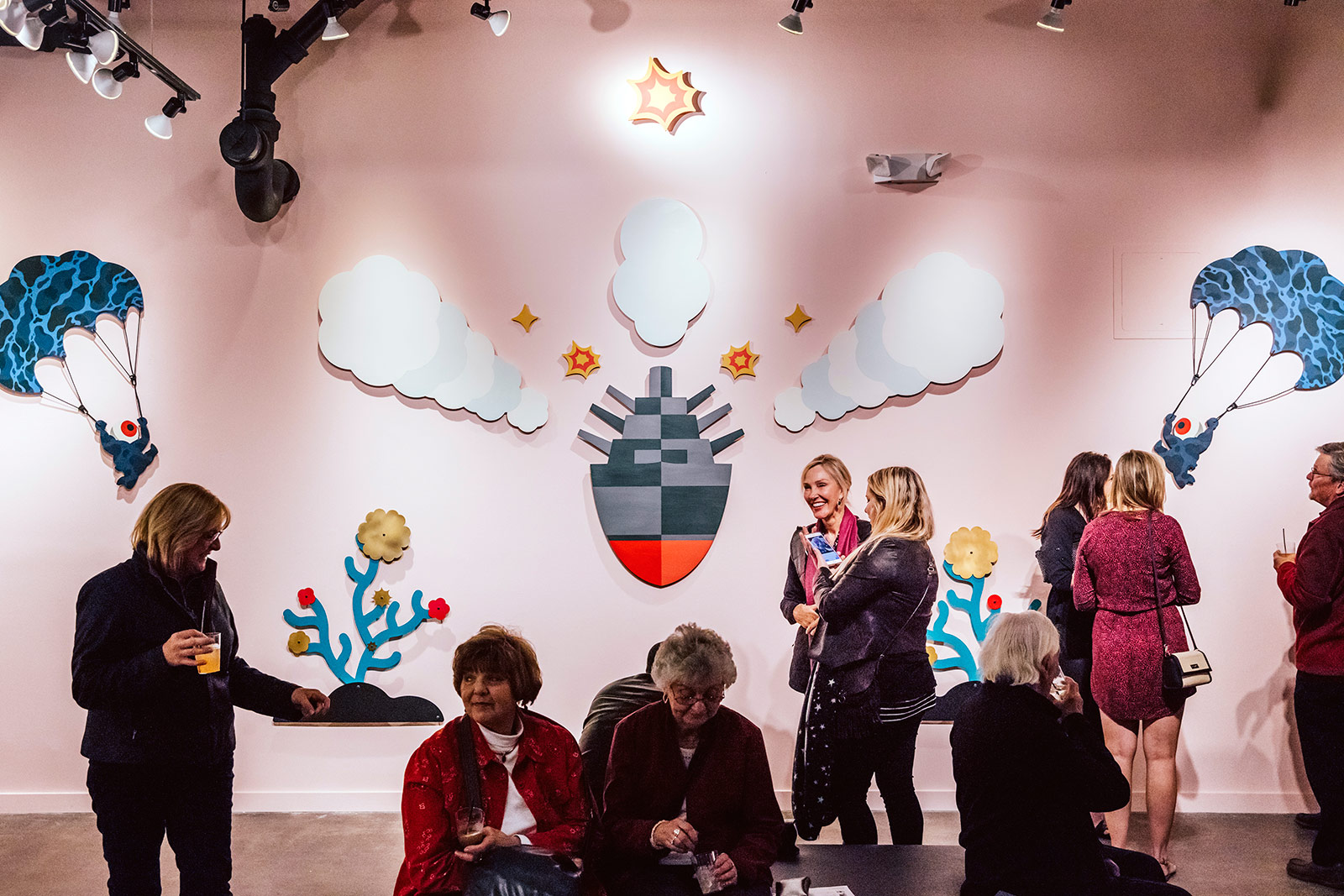 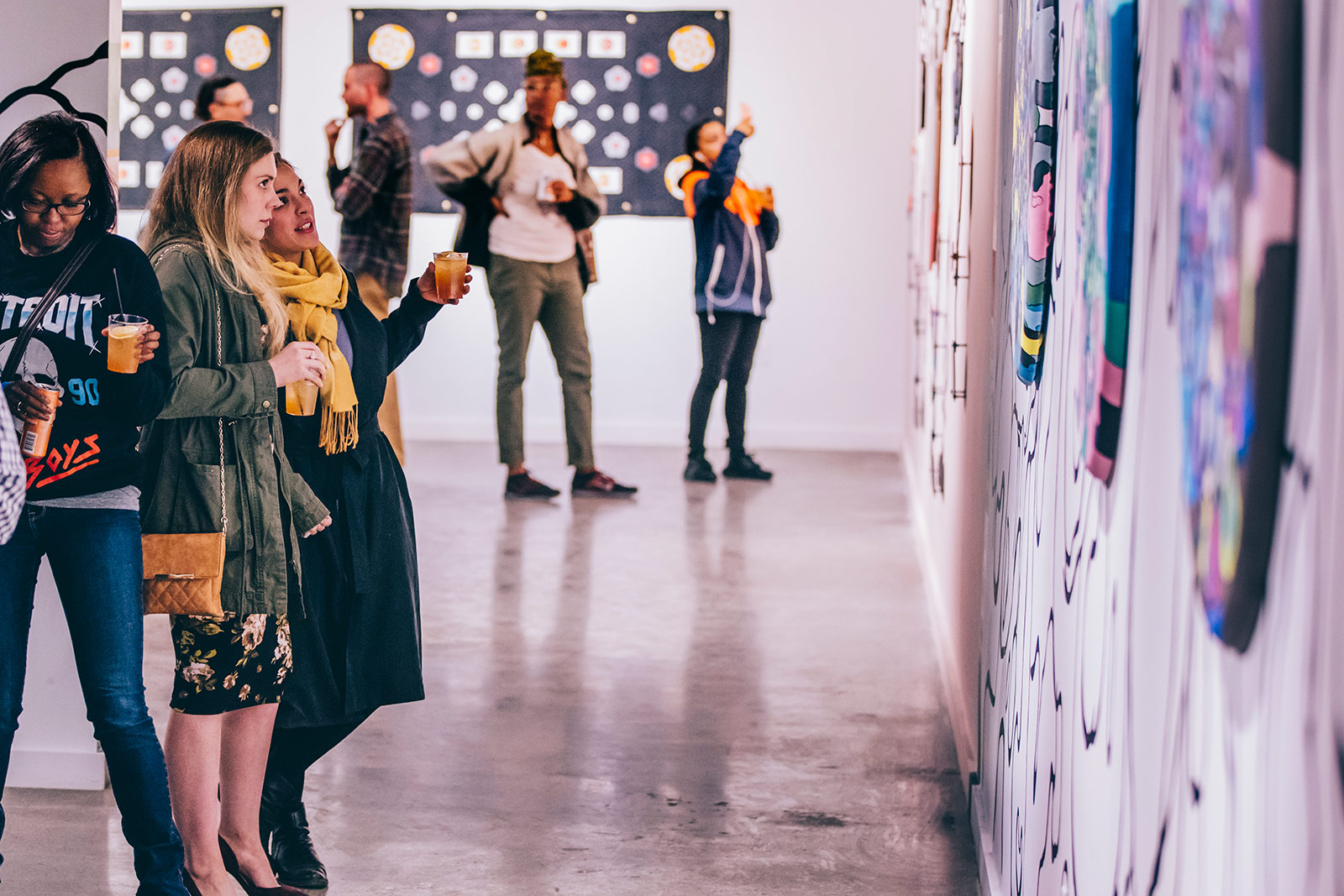 In-keeping with the contrastive nature of the city, the three artists residing at the House of Art this time around bear very few similarities in neither the nature of their work, nor the process of creating it. Tschabalala Self’s work focuses on the female black body and its misinterpretation in society, reiterating that it’s more important than ever that transformative art is being made in the current political climate of suppression and elimination. Ellannah Sadkin works with cartoons as her central point of inspiration, as she feels that they represent simpler elements of society. Her work has developed into an interactive dialogue about her struggles with anxiety as the House of Art has given her the opportunity and resources to branch out into new mediums. Mr. Kiji is a Japanese-born New York-based illustrator and art director working around the concept of reducing visual language to be a vision. A lot of his formal training as a painter was taken from Thanga, a Tibetan Buddhist style and, although he chose not to adopt the aesthetic of the methodology in animation, formality and functionality are still evident in his process.

The opening night was a packed affair that brought highbrow art dealers and Yeezy-clad youngsters alongside art school dropouts and a particular local elderly couple who showed everyone up on the dance floor. The Red Bull House of Art is a place for the people of Detroit and visitors alike to enjoy the creative scene that the city is building for itself in the wake of turbulent times that came before. The exhibition is open to visit on Saturdays in the city’s Eastern Market district, and the three artists talked us through the work that they have on show. 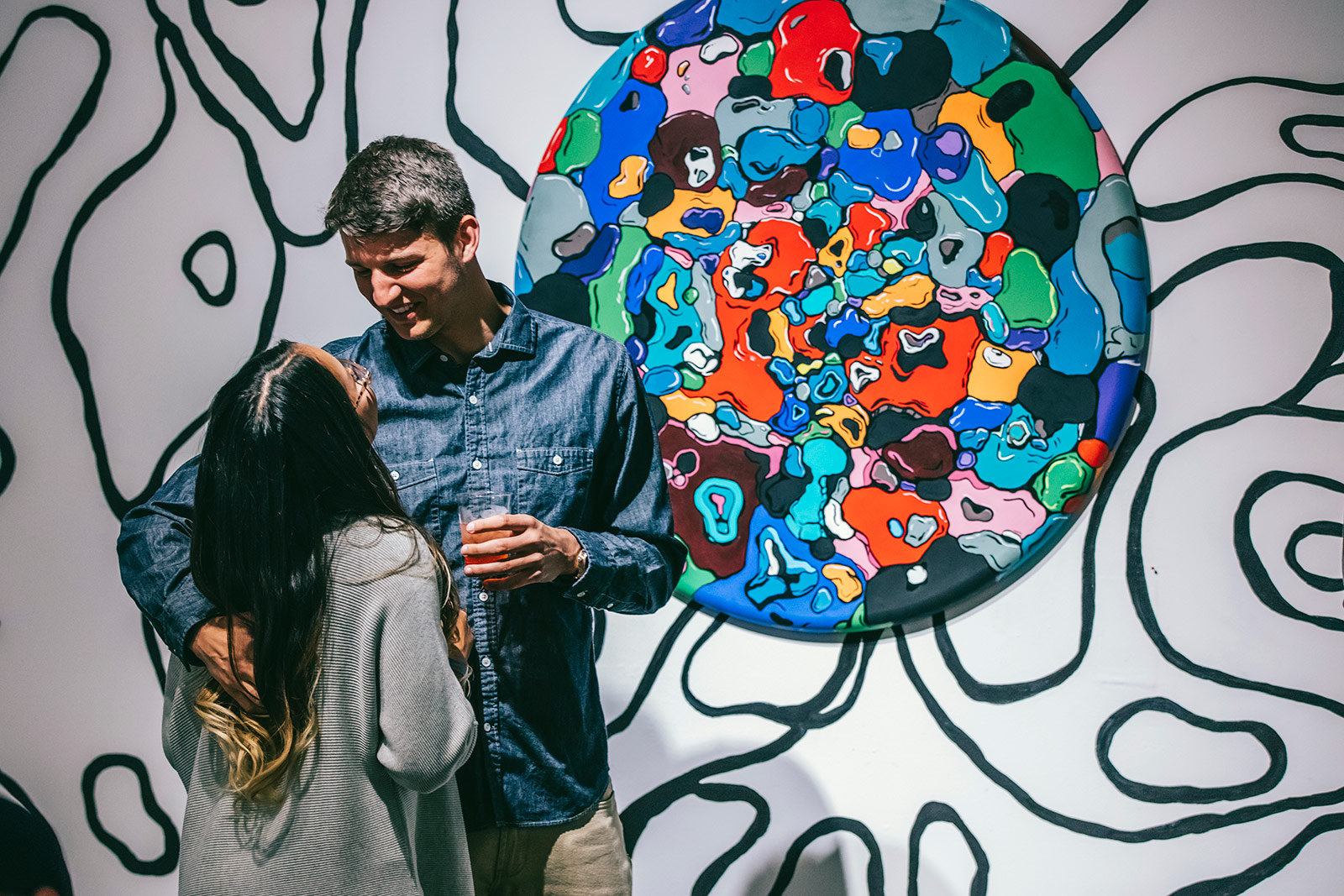 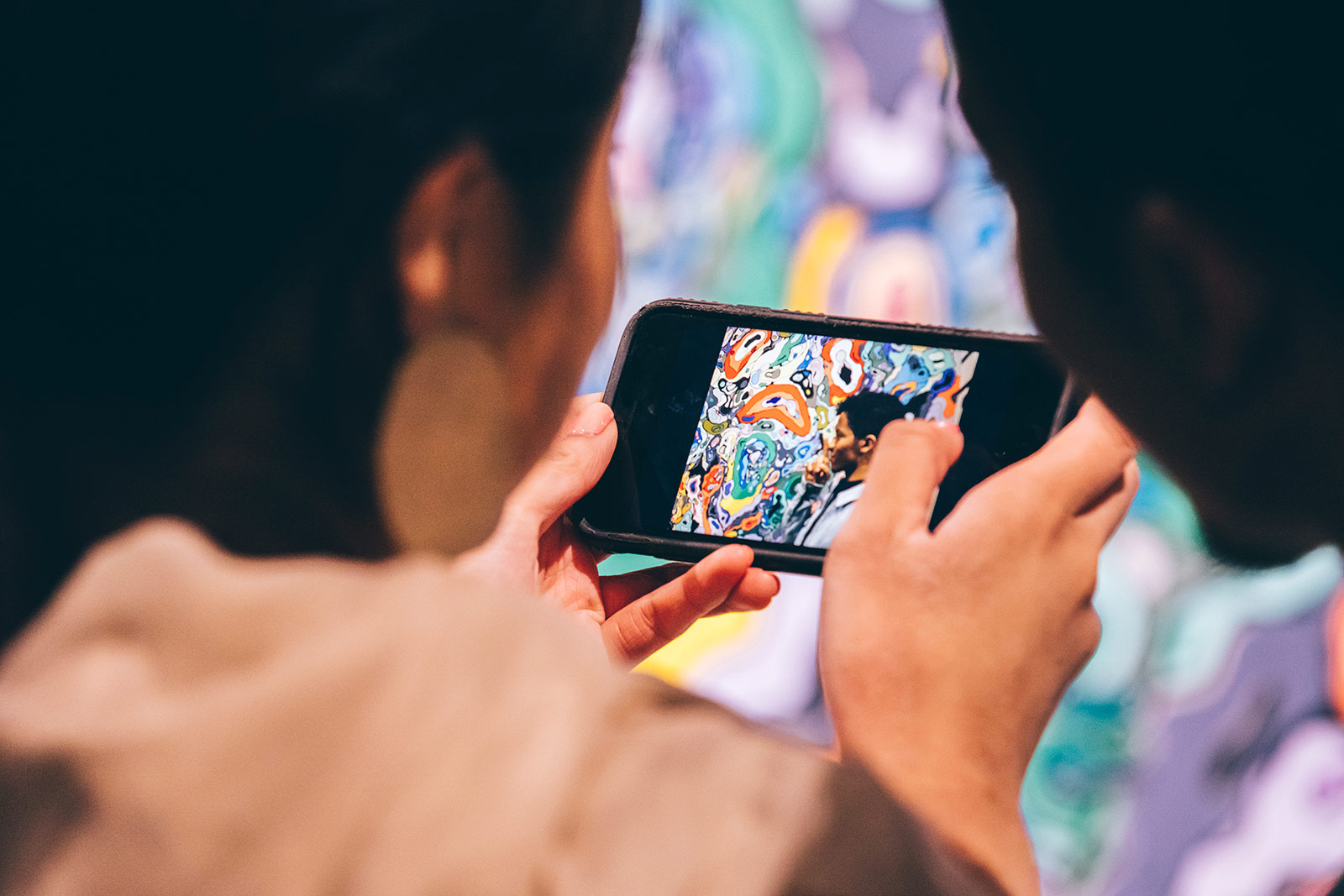 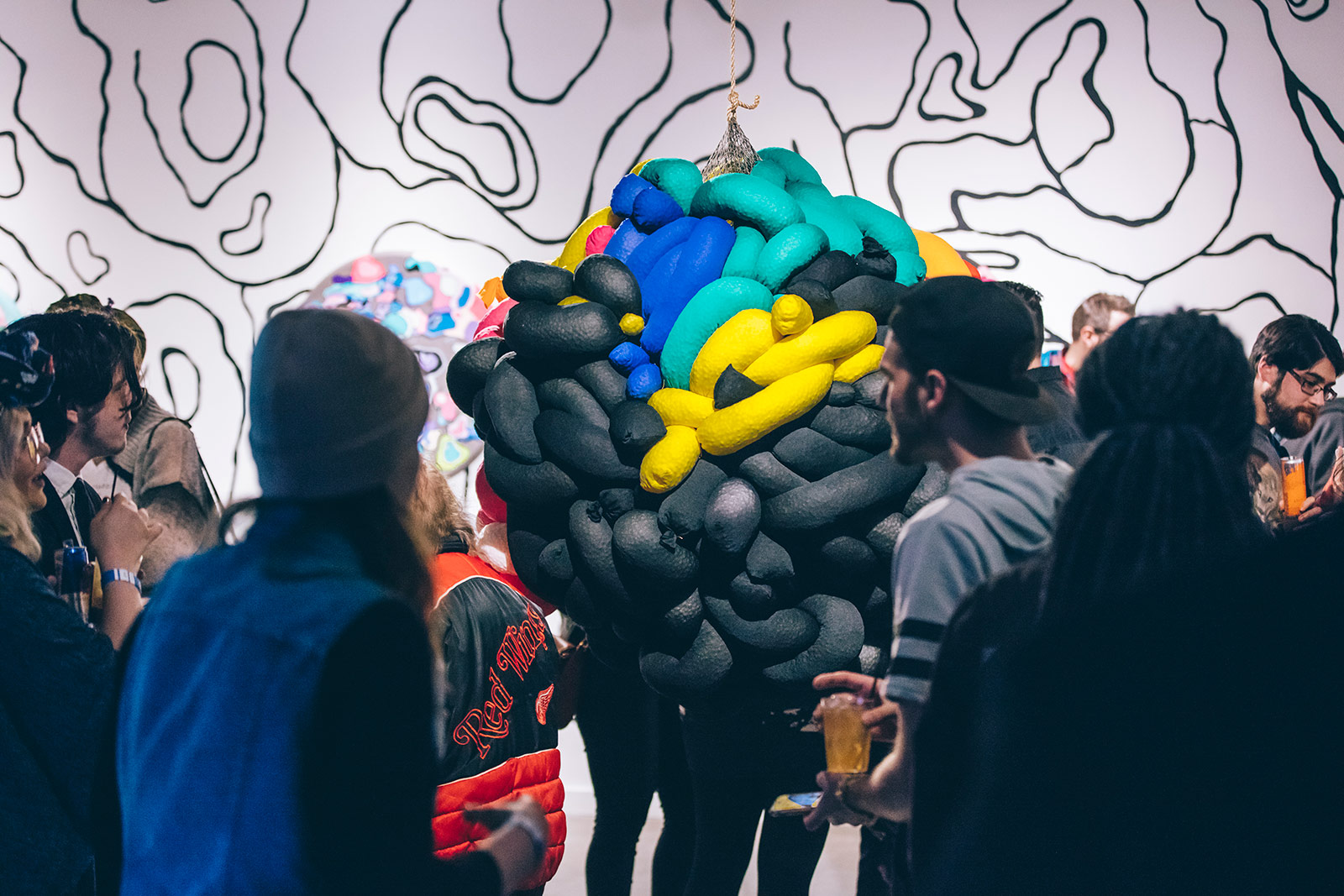 Tschabalala Self
“This is my first time doing an installation like this; the idea was to create an environment in which the viewer and the subject could be put on equal ground, and that the viewer participating would be implicated in the work. My hope was to negate and ply apart the dynamic of the viewer and of the artwork, and having this voyeuristic thing that kind of implies that they have the authority to judge the case”, stated the American artist. “When you’re inside the installation, because of the light projections, your body and your silhouette become integrated into the work through your shadow. You have to contain your urgency within that space – the space that is defined by the subject –, and that subject is a black woman; so you have to negotiate your body in the space defined by a feminine black force. I’m hoping that, when people leave the exhibition space, they take something away from that experience and carry it in their everyday lives.”
Mr. Kiji
“My body of work is called Home from home and the idea is that people understand what does it really mean to say that phrase and how it relates to the concept of ‘home’. The idea behind making these quilts – I call them Conflict quilts – is that they are actually packing blankets. I found it ironic that this quilt, which represents so much about home, comfort, safety and that is something that carries so much of your heritage, is used to protect the things from your home in transit when moving from one to another.” “I tried to emulate and evolve using patches and the language of Hexology and some other imagery to make these quilts. The basis for the layout is based on submarine war flags from WW2 and, since I’m from both Japan and the United States, a lot of my personal identity and conflicts are represented in the naval atmosphere of the Pacific Ocean. It’s like an assemblage, or an abstracted shipwreck world of a person wishing to go home or thinking about home. A lot of the symbols deal with navigation and can be read as the sun or moon cycles, but also as hazards.”
Ellannah Sadkin
“My whole show is about anxiety. The paintings are brain scans of minds that have general anxiety disorder. As a sufferer of anxiety, I wanted to show that. Three paintings are about meditation as I’m practising now and trying to work through my issues with my work. I have a hanging installation and when the piece hits you, it’s meant to be what it feels like to have anxiety: literally being hit by anxiety.” “They’re all representations of my inner disordered world trying to find the order. There’s a lot of colour therapy work going on; there are two pieces from an old series, and I was thinking about what it means to pray and how artists feels when they’re actually making the pieces. I wanted to show what emotions I was going through with the colours. They’re like mind-maps; I was trying to put everything out there but, instead of doing it with numbers, I wanted to do it with colour and shape.” 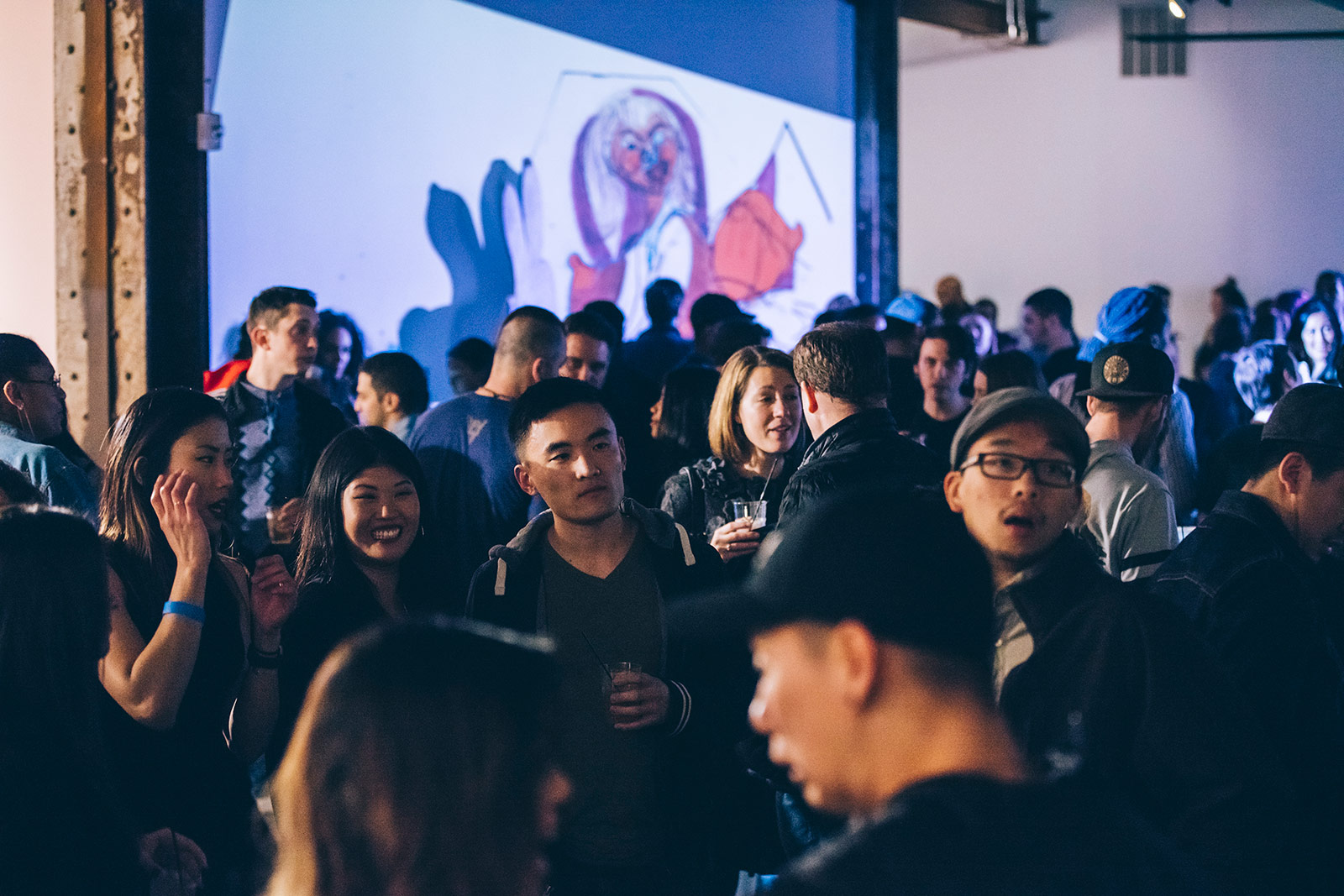 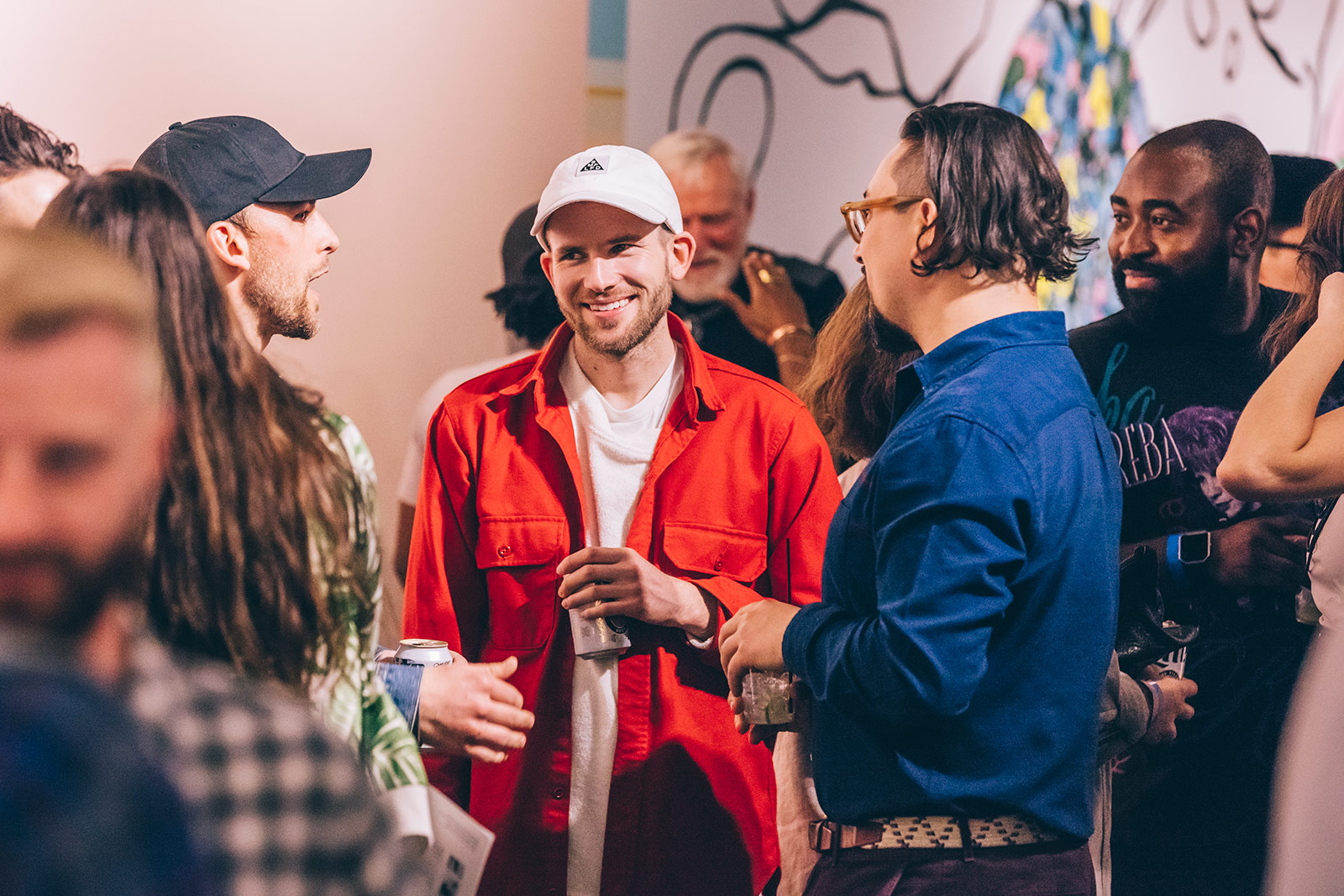 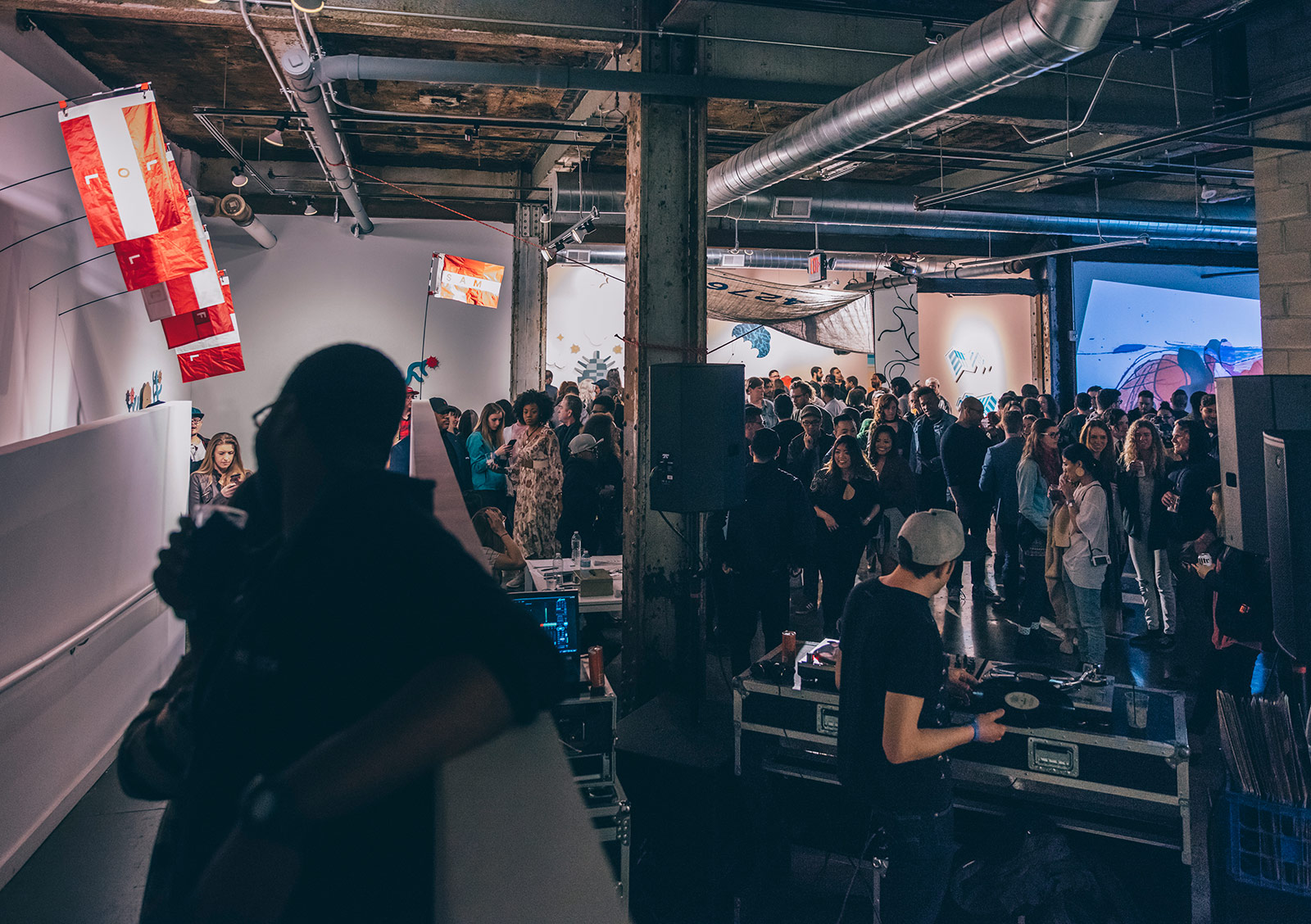 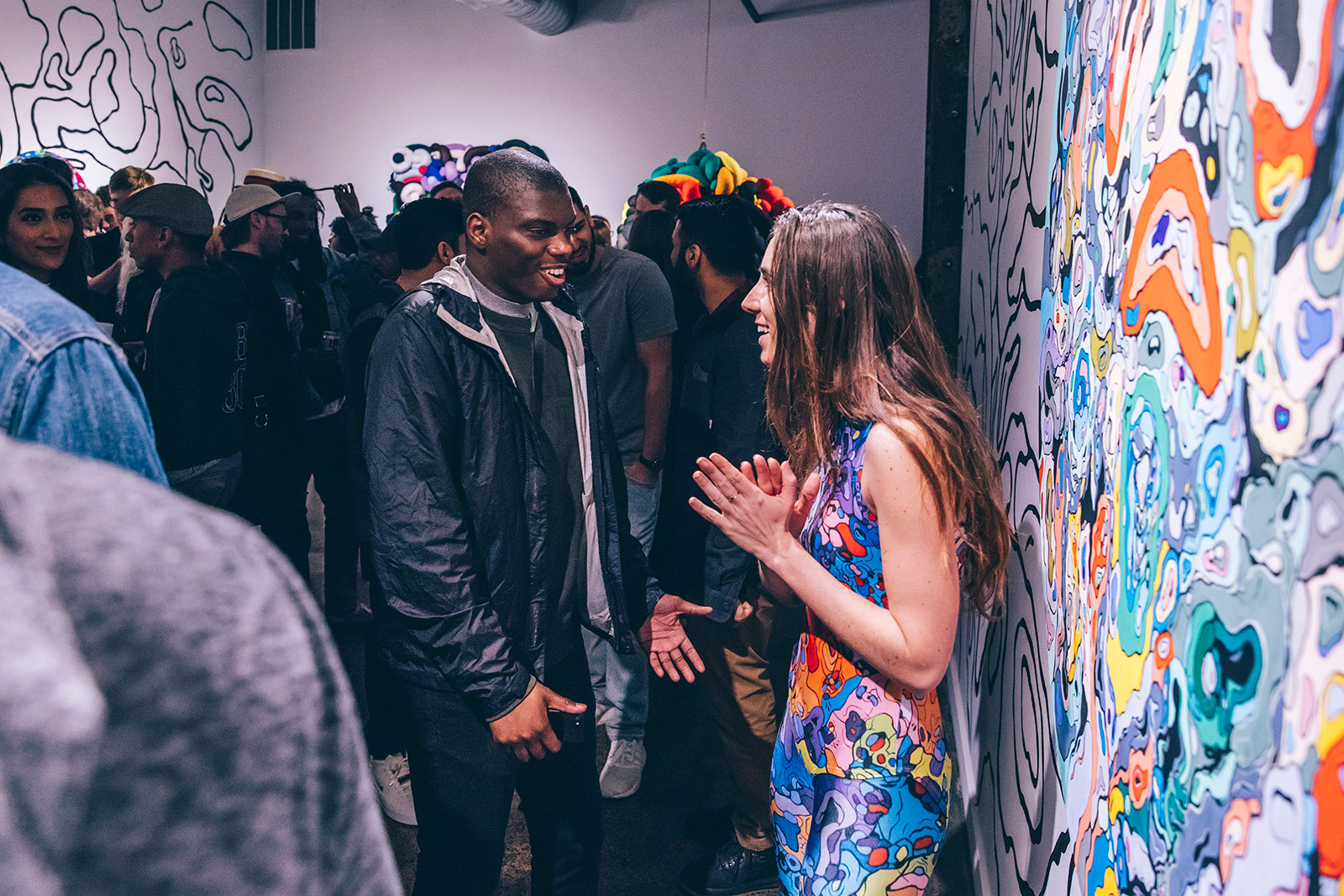 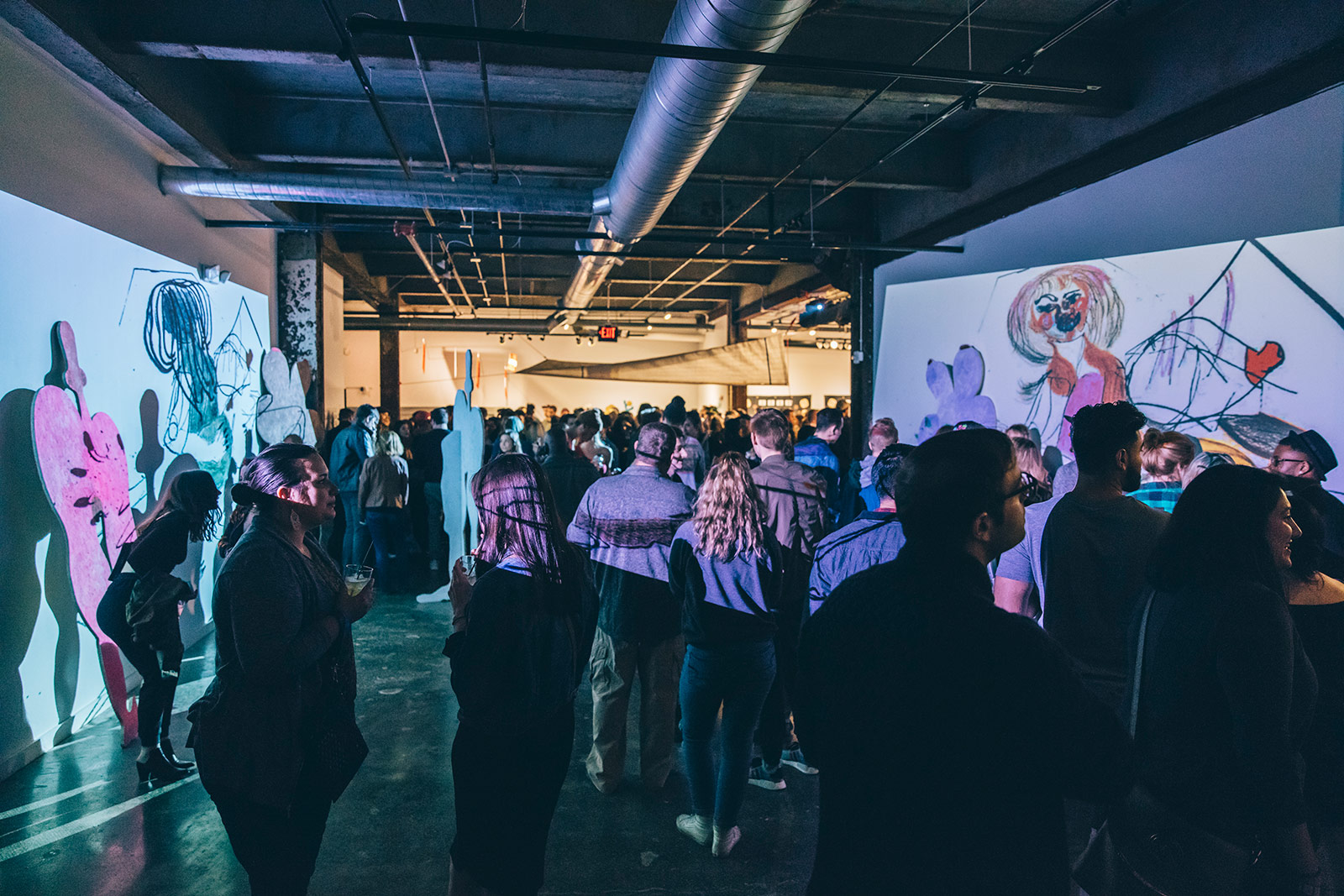 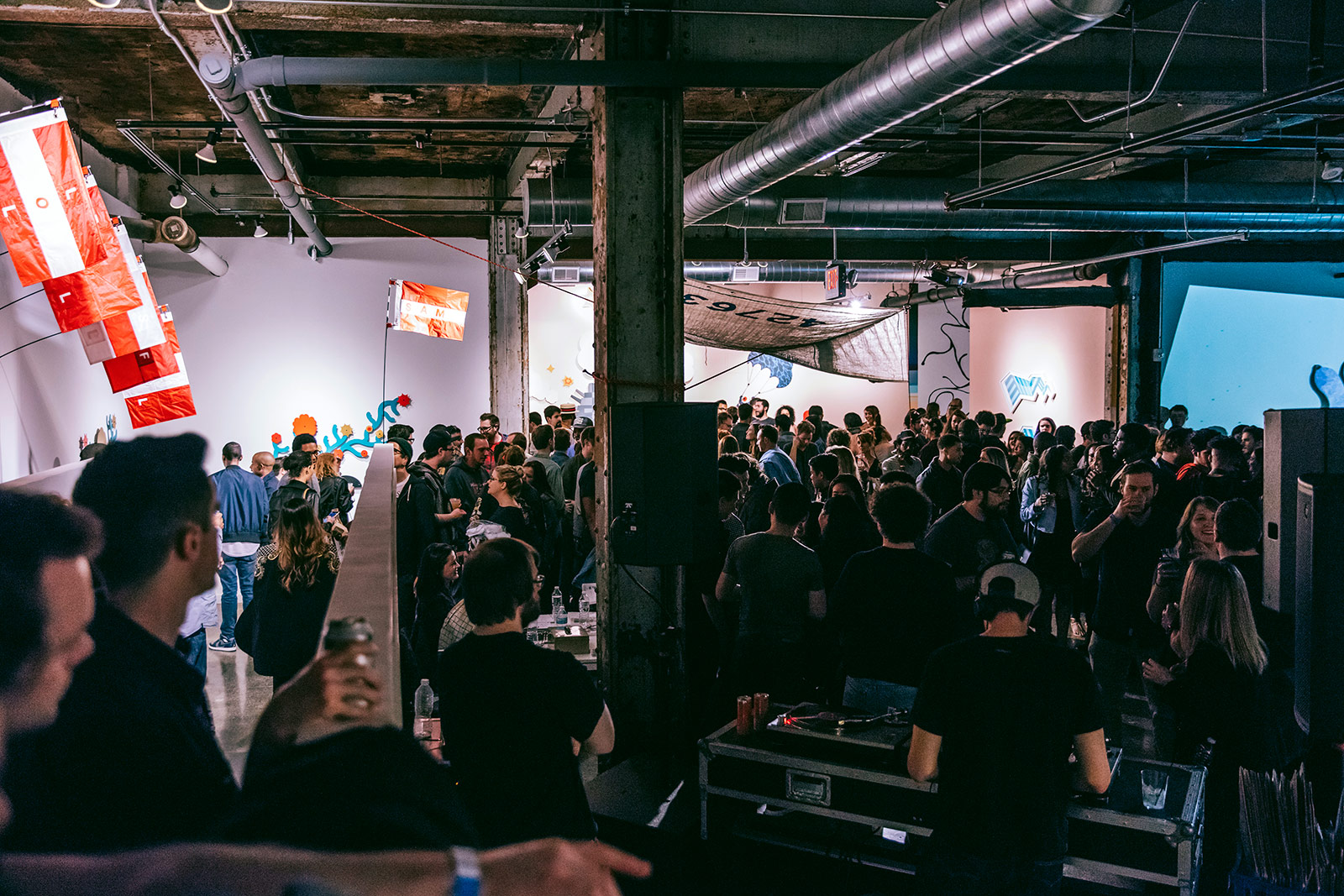 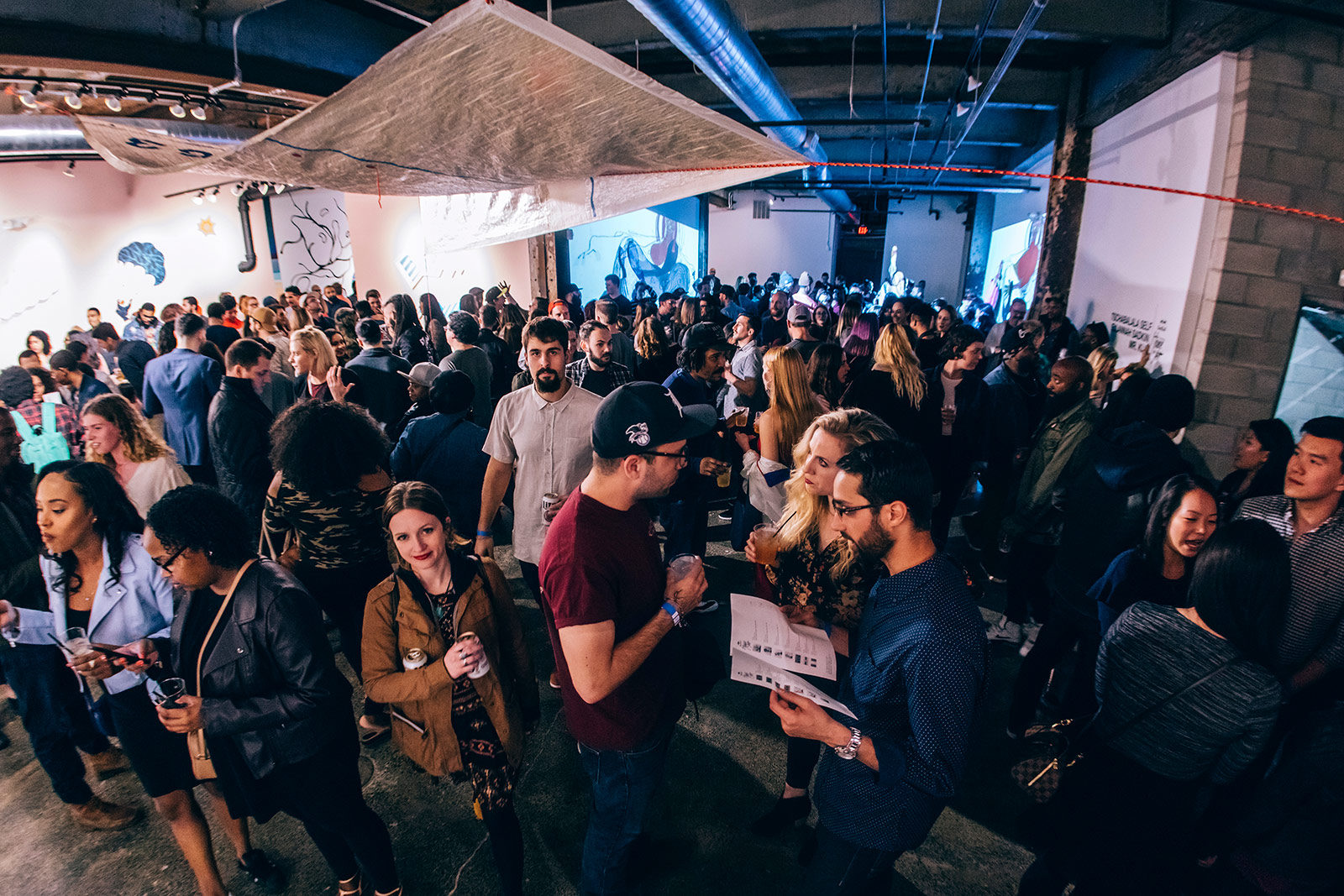 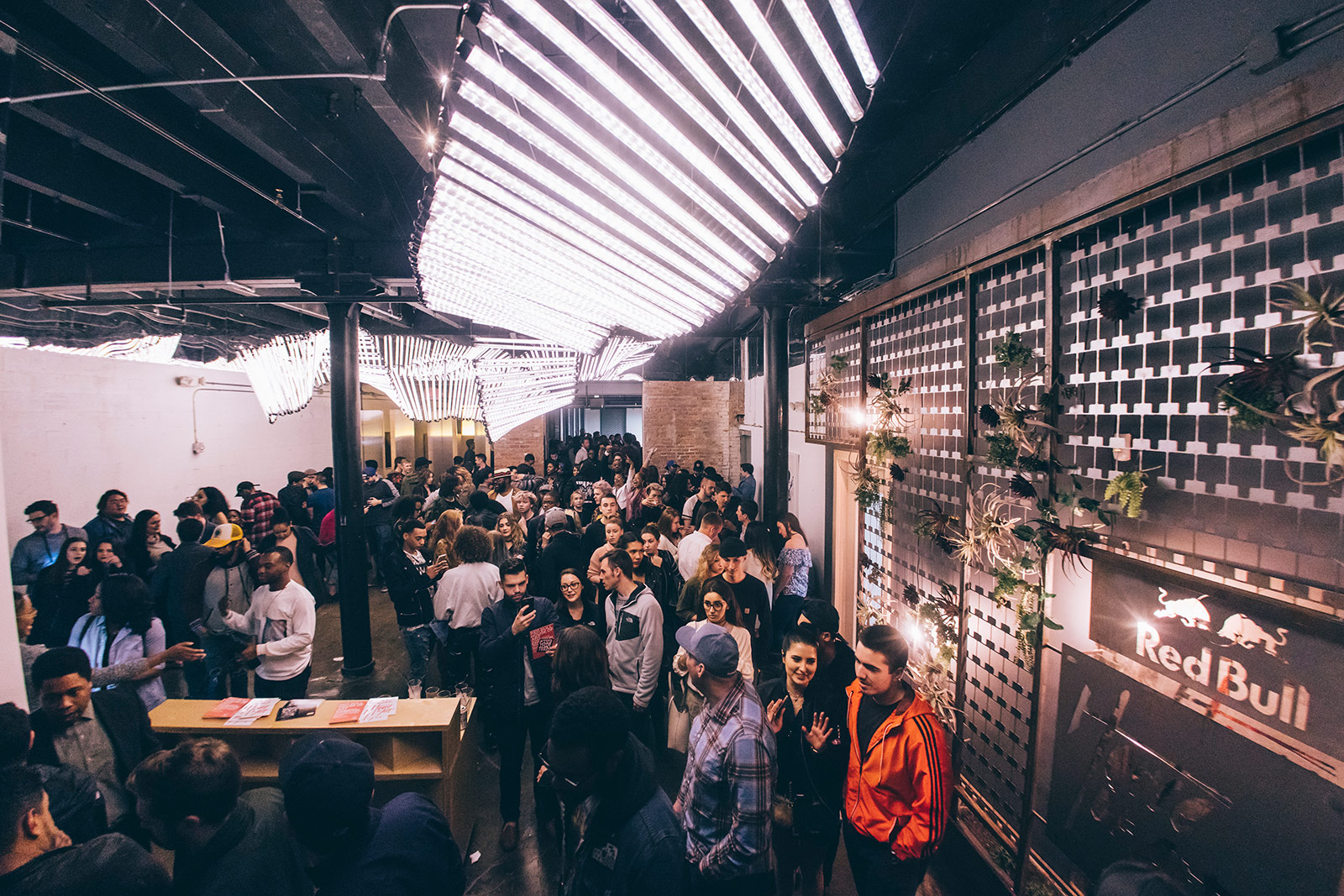