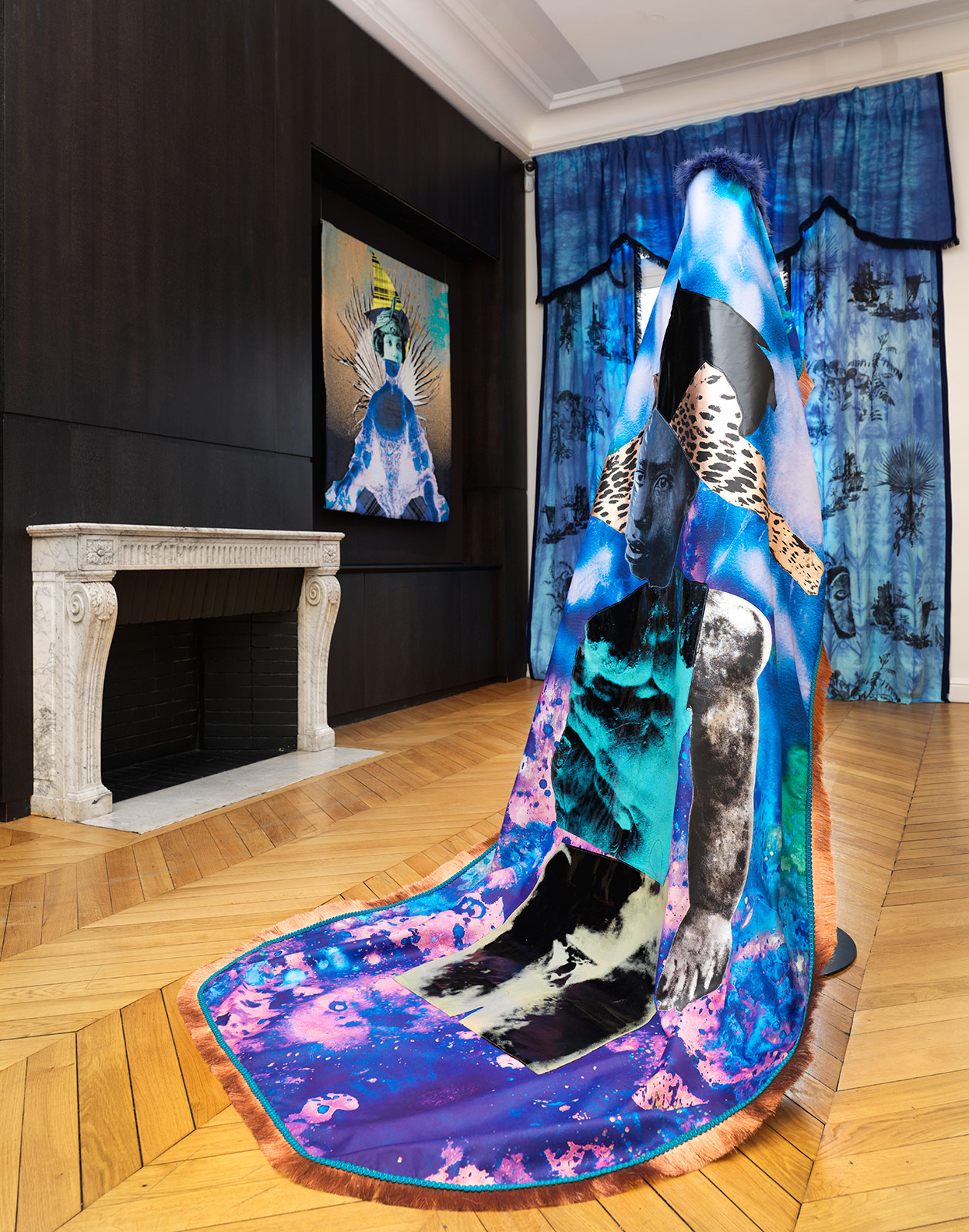 A festival of vibrantly dyed textile work, large scale portraiture and sound compose Raphaël Barontini’s new show. Blue Lewoz, on view until July 23 at the Mariane Ibrahim Gallery in Paris, interrogates festive traditions of the Creole culture of Guadalupe’s enslaved people. The show is momentous for the artist, as his first solo gallery show in his city of residence. This new collection further develops the artist’s thematic and technical concerns, and invites visitors to experience a saturated, creolised account-taking of European and Caribbean histories.
The problem of articulating Raphaël Barontini’s work begins with selecting a medium to describe his pieces. Painting allows for the articulation of an important modality of his work but fails to accommodate his matrixed use of screen printing and digital image use. Picture seems more apt, dually a container for his photographic and painterly techniques. Yet a picture requires an image, a clarified representation of one kind or another, something Barontini often resists in his abstractly arranged compositions. Collage might be the closest approximation language will allow for, and his work expands upon this flexible medium, merging theory with practice.

His work interrogates the spaces between dominant, hegemonic histories, the places from which the Creole cultures he references are born. Léwoz is a Creole term referring to a musical style, and evening celebration, practiced in Guadalupe by enslaved communities – a life affirming festivity within the context of inhumane conditions. Blue represents a colour and a history, indeed a colour with a history, as indigo was a major export from Guadalupe’s plantations. Barontini’s new show invites visitors to interrogate their own understandings of this period of Caribbean slavery and French colonialism, and in doing so, engage in imaginative understandings of contemporary patchworked (collaged, perhaps) societies.

For film theorist André Bazin, the photographic image represented the promise of an art of pure realism. Due to its indexical relationship with that it photographed, the 35mm frame proved that a moment happened as represented. It is this principle of photography as described by Bazin that freed painting from its impulse to represent reality. The advent of digital image-making has freed photography from its task of depiction as well. In an interview with TCU, he tellingly uses the term ‘representation’ to discuss the different modalities of his work.

Blue Lewoz, and within much of his oeuvre, Raphaël Barontini interrogates the rift between photography’s ability to depict, to tell, and painting’s ability to inform, and joins both in a distinctly creolized mode of storytelling. Screen-printing is one intervention capable of both tasks, representing the union of the photographically defined image, and the painterly act of brush stroke (squeegee application in this case). Blue Lewoz showcases the capabilities of this technique with several new large-scale portraits, in a style he has refined since his career began, as well as with several textile pieces. Barontini has also unveiled his Toile de Jouy pattern upon curtains, dresses and capes, transposing the artist’s creolised pictorial histories upon indigo dyed fabrics.

His new exhibition creates a space rather than a simple assemblage of work. A newly adapted 2019 audio composition by American hip-hop musician Mike Ladd sounds throughout the gallery. Blue Lewoz is an experience for visitors, inviting them to encounter various representations of history and its characters. He presents the queen of his Léwoz in court portraiture, clad in classical European formal wear, yet dyed indigo. This collaged piece creates renewed histories, code switching between classical and contemporary visual languages. As we learned in Raphaël Barontini’s 2020 METAL interview, art activates new epistemic and imaginative possibilities; Blue Lewoz will certainly leave visitors with impressions and questions to ponder for years to come.
Raphaël Barontini's solo exhibition Blue Lewoz is now on view at Mariane Ibrahim Gallery, 18 Av. Matignon, 75008 Paris. 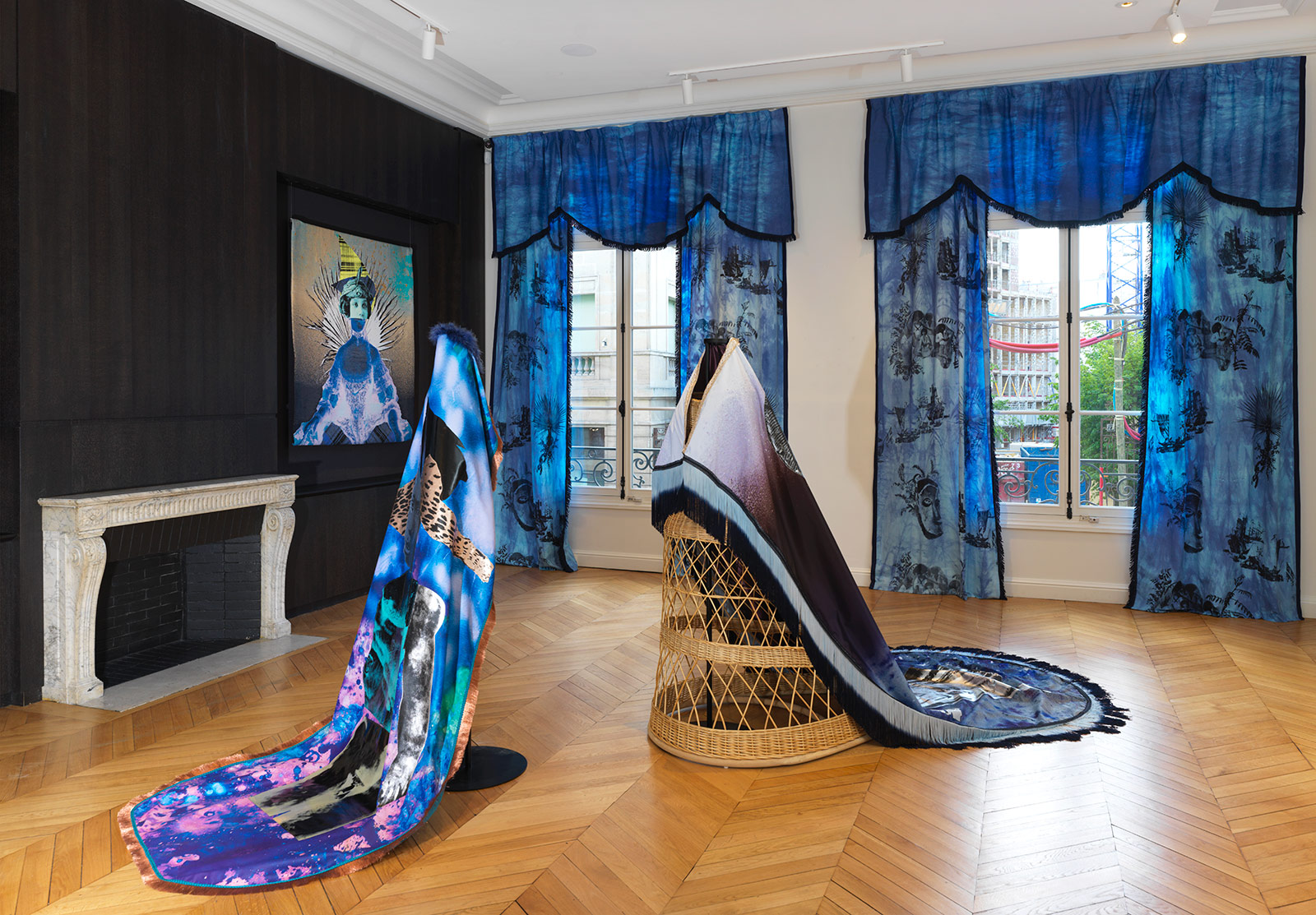 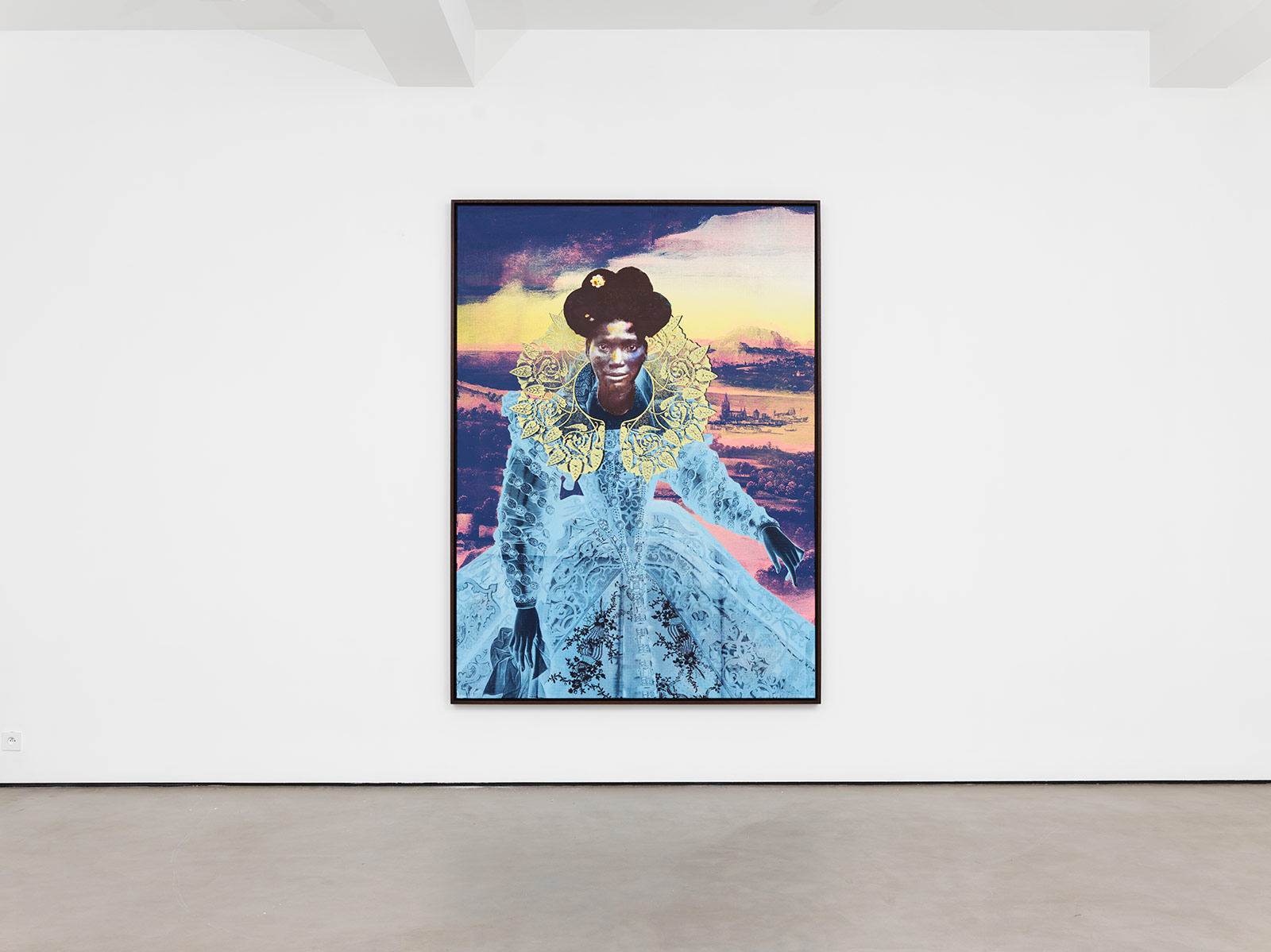 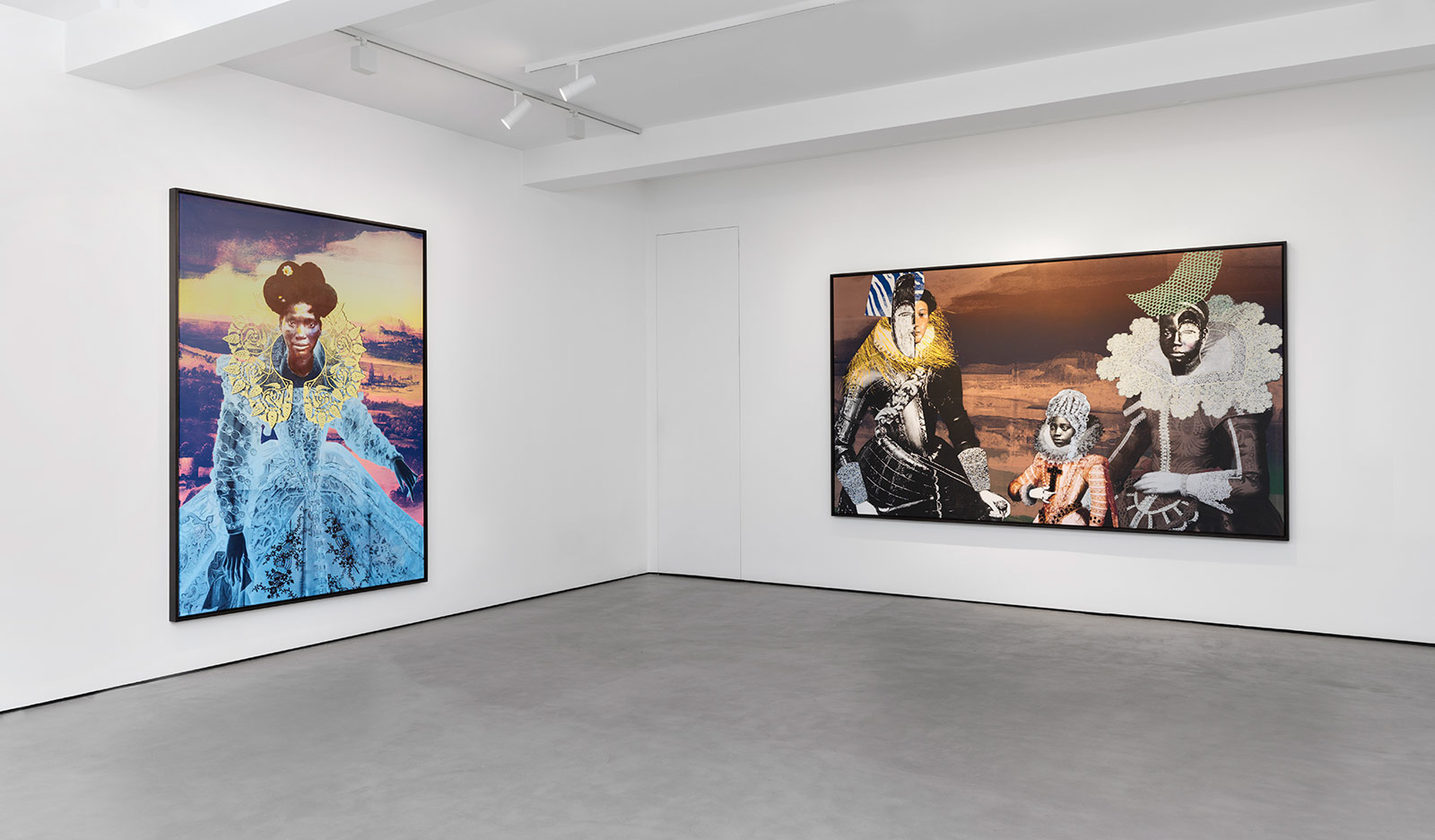 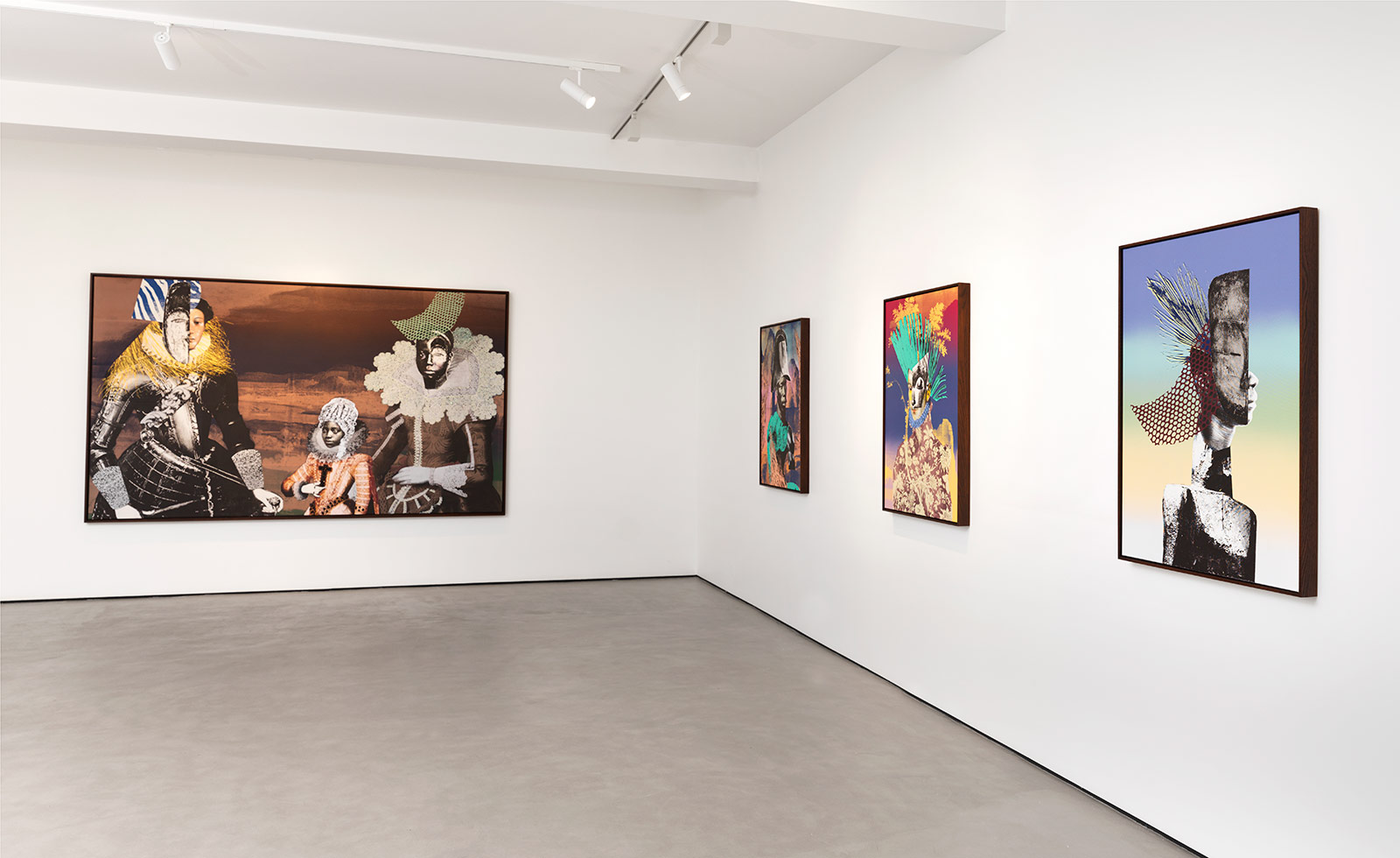 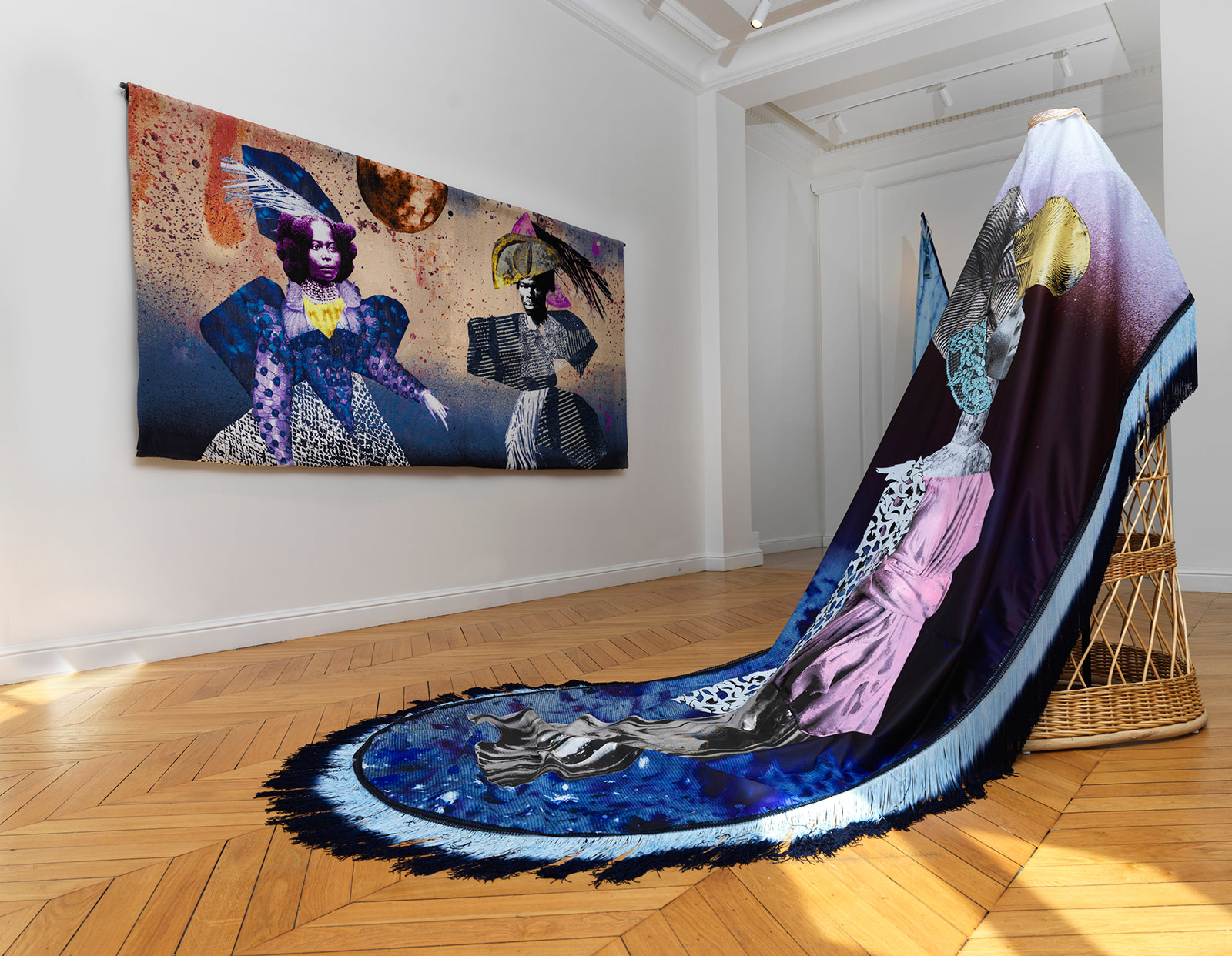