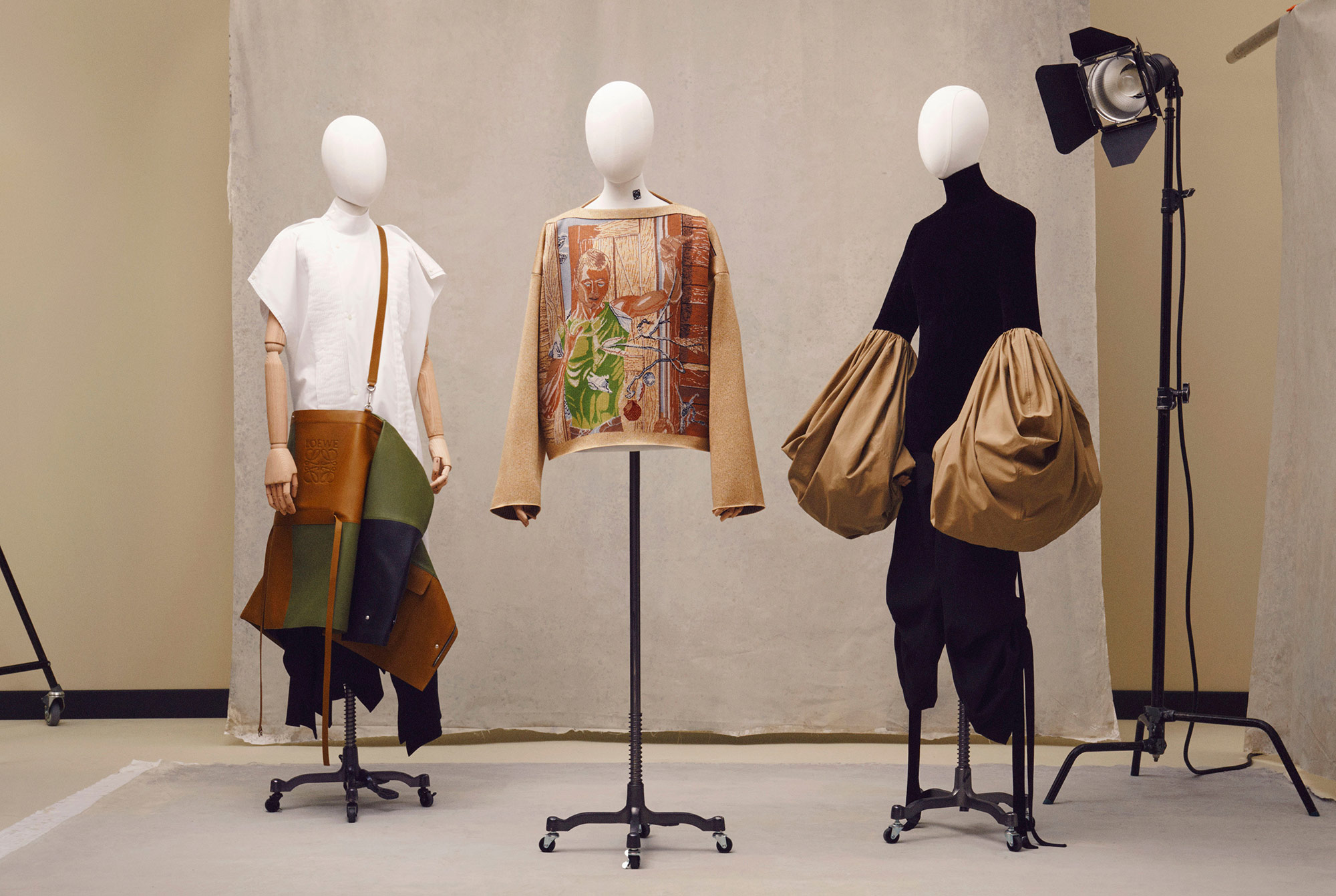 Usually, by this time of the year we’d be exhausted after the fashion week marathon. But as the global health crisis is still unresolved, fashion designers have had to adapt to the new situation – by wearing masks, keeping social distance and, of course, cancelling physical fashion shows. From July 9 to 13, Paris Fashion Week Men was held online, with luxury houses and emerging designers alike presenting videos to introduce us to their Spring/Summer 2021 collections. Here’s what’s struck us the most.
As you can imagine, each designer has tried to convey their identity through these videos, and after watching all the presentations, we’ve noticed a wide range of approaches. Some brands have opted for highly conceptual videos that didn’t show the clothes, like Dries van Noten, Namacheko or Fumito Ganryu. Others, like up-and-coming designer Louis Gabriel Nouchi have also been conceptual but did showcase their clothes – in his case, a handful of people reading different pages of L’Étranger, by Albert Camus.

Those who have taken the opportunity to display their new collections have taken different paths. For example, there were those whose presentations resembled the most a traditional showcase, like Hermès, Yohji Yamamoto, Lemaire, Études, Palomo Spain, We11done, Juun J and Reese Cooper, who staged runway shows in their own ways – either in nature, in the empty streets of a city during lockdown, or in a studio. Some others have preferred to show us the behind the scenes, offering us a glimpse into their creative processes, like Rick Owens, Y/Project or Amiri. Naturally, some have taken the digital route, thus presenting videos created with CGI and 3D techniques, like White Mountaineering, Sankuanz, Boramy Viguier or EgonLab. And there have also been those whose videos looked like long campaigns, like Casablanca and Lanvin.

Lovers of fiction will enjoy the videos resembling fashion films or even short films. That’s the case of Ludovic de Saint Sernin, who introduced us to his swimwear collection through a romantic short film set on a beach in southern France; or Lazoschmidl, who decided to do the same but in a pool party instead of in nature. Other brands working on short or fashion films include Facetasm, Sean Suen or Uniforme. A handful of other designers decided to reflect on their past, heritage and DNA, thus reinforcing their own history, like Pigalle, Dunhill, Li-Ning or Arthur Avellano. And last but not least, dancing and movement have also had their peaks in various presentations, like that of Issey Miyake Homme Plissé or Wooyoungmi.

Among the many, many videos and presentations, we’ve selected our top 10 so you don’t miss a thing.

Loewe
Jonathan Anderson’s alternative approach to a regular fashion show has been the most original this season. Placing the sense of touch and craftsmanship at the forefront of his creativity, Anderson has teamed up with M/M Paris to make a show-in-a-box, a highly beautiful and complex archive box with internal dividers containing various elements, which range from a personal letter to an inspiration booklet, to colour and fabric cards, paper blocks of some key looks, or cut-out silhouettes of the team members. The result is an exquisite piece inspired by Duchamp’s Museum in a Box that encapsulates all the values of Loewe: craftsmanship, an intellectual and conceptual approach to fashion, and demanding the public’s engagement and reaction.

And the collection? In a presentation video, Loewe’s Creative Director explains: “The approach for this menswear collection was taking one technique or one idea and making it a total look. Each time when we were doing pieces, they had to be quite peaceful in their approach and they had to be able to work sculpturally on a mannequin.” Indeed, and as he himself puts it, “the key silhouettes have been about volume” and are embedded in a “heightened sense of architecture” – we find balloon sleeves, straps and drawstrings that dangle, cut-outs, circular tops, askew buttoning, or side bands festooning past the hem.

Dior Men
“A celebration of identity, of the power of creativity, of art’s ability to transport.” This sums up Kim Jones’ beautiful and meaningful new collection for Dior Men, which he’s done in collaboration with Ghana-born artist Amoako Boafo. The two creative forces met last December in Miami – Jones debuted his Fall 2020 collection and Boafo was a resident artist at the Rubell Museum, which happens to be just in front of the building where the Dior Men show took place.
To introduce the collection digitally, the Maison has presented a two-part video. The first act offers an in-depth glimpse into Amoako’s studio, where we see some of the models he later portrays in vibrant paintings and where he shares his inspirations, creative process, and relationship with fashion and Kim Jones. We’re also introduced to Jones’ creative process, his eagerness to work with an African artist (he grew up in different countries including Botswana, Ethiopia, Kenya and Ghana) and how did the collection come to life during the pandemic.
The second act, directed by Jackie Nickerson, shows the looks individually so we make ourselves an idea of what’s coming next season – neon colours combined with subtle shades of grey, jumpers printed with Amoako’s paintings, other pieces with prints inspired by Amoako’s artworks, tailored pieces, and signature elements of the House like the Dior Oblique monogram in tops and bags. The result is a collection where art and fashion meet and where beauty and meaning merge into one.

Louis Vuitton
Virgil Abloh has opted for a fun, animated but also mysterious presentation this season – we’ve actually not seen the collection yet. Playing with humour, he’s directed a short video starring colourful cartoon characters – “one unrulier than the other” – who sweep through the city’s gilded salons, go wild at Louis Vuitton and cruise down the River Seine leaving behind them a rainbow trace transfixed across the Paris sky. These lovely rascals, whose eyes are LV’s monogram flowers, go through some of the city’s most emblematic buildings and areas (Arc de Triomphe, Pont Neuf, the Louvre and Pompidou museums…) before loading their Louis Vuitton trunks “with the finest fineries they could find” and sailing into the sun. Their next stop? Shanghai, where they’ll arrive on the 6th of August. And they’ll also be doing a stop in Tokyo too, so stay tuned for more details!

Y/Project
A good, interesting, shocking or eye-catching look depends on many things: of course, the clothes, but also, the styling, which is sometimes even more important than the garments themselves. This is precisely what Y/Project teaches us in their presentation, a 10-minute-long video where a couple of stylists play with the different ways a same piece can be worn, making up to four different total looks with the same clothes. Rolling up or down sleeves, buttoning and unbuttoning, bandana scarves that transform into tote bags, long pants that become short by unzipping their lower parts – you name it.
In a personal letter, the brand’s Creative Director, Glenn Martins, says that the S/S 2021 collection “is about reinforcing our essence,” and adds that “one design can be worn in different ways, creating a different emotion.” So, as a result, “even the most basic Y/Project piece has a pronounced design twist” and invites the customers to play with their emotions through clothes. In addition to the seasonal collection, the brand is launching the Evergreen Collection, which features a range of historic pieces “with representative design twists” and “revisited to be produced in the most ethical and sustainable way.”

Hermès
Set in their beautiful, luminous headquarters, Hermès has staged an informal catwalk show. The French Maison presents its newest collection through a sort of behind-the-scenes aesthetic, where we see a handful of stylists dressing the models and making sure every detail looks polished and sleek, the models strutting down the imaginary runway, posing in front of a neutral background, and taking selfies in between shots. Dynamic, simple and with the House’s savoir-faire, the video is an example of very well-thought and well-executed simplicity.

Henrik Vibskov
Introducing The Horsepower Takeaway collection, whose main inspiration is fire after the designer saw “a beautiful picture of some burnt down scooters,” Henrik Vibskov takes us on a 10-minute-long trip “inside the machinery” behind his brand as well as his highly conceptual take on fashion design. The Danish creative force has been focusing on sustainability a lot these past years, as well as on creating unique prints, patterns, textiles and silhouettes. In this video, he explains his process from an initial idea or inspiration to the final garment we buy and wear, all set in a building made by a Danish architect who also burnt the bricks that we see – thus making a strong and coherent statement about art, design, architecture and creativity on a global level.

Sean Suen
Taking Nietzsche’s The Birth of Tragedy book as a starting point, Sean Suen presents the 3-chapter video Dionysus, where he “invokes the spirit of the divine, prodigal giver of sublime inspiration whose resurrection means Life stronger than death, as a symbol of humanity’s desire for Life and its eternal admiration for subsistence.” Bridging the divide between the essence of human life and the spirit of the time, the fashion designer desires “to destroy the taboo, indulge ourselves, dismantle all bonds and return to nature.” A strikingly beautiful, poetic and reflective film on the human condition in polarising times.

Wooyoungmi
Casper Sejersen signs the video of Wooyoungmi’s S/S 2021 collection, where dance, unity and collectivity are the main pillars. “At its core, the concept of group choreography represents an assembly of diverse individuals motivated by one collaborative purpose,” reads the press release. “Progression calls for unity; a formation of people evolving together as part of a rhythm. Wooyoungmi expresses the momentum of our time through the medium of dance.” Set in the beautifully decadent Théâtre des Bouffes du Nord in Paris, we see five people dancing alone and in groups, intertwining their bodies and eerie, light clothes – from parkas to trench coats and two-piece suits – in a visually hypnotizing 4-minute clip.

Berluti
Similar to the approach of Dior Men – maybe because of his past at the helm of Dior Homme –, Kris van Assche has presented a collection made in collaboration with an artist, in his case, ceramist and sculptor Brian Rochefort. In this 10-minute-long video, Berluti’s Creative Director guides us through the behind the scenes of the collection. “There is this one thing that you can’t do in a fashion show, which is put pause and explain where things come from. I thought it was the once-in-a-lifetime occasion to actually give people the background and to have this conversation with Brian,” he explains at the beginning of the clip.
With a strong focus on the chromatic palette inspired by Brian’s work, we see how the two inspired each other and how they worked from the overall concept of the collection to the finishing details, to the exquisitely rich colour range of the fabrics or the creative experiments van Assche does on shoes. In all, Berluti’s S/S 2021 presentation deepens into the creative process of two artists whose mediums seem different at first sight but that hold a lot of resemblances when looked more closely.

Fumito Ganryu
Taking a more abstract, conceptual approach, Fumito Ganryu has presented a video with TVs as the main protagonists. Working on oppositional concepts like digital vs analogue and fiction vs nonfiction, the Japanese designer’s presentation resembles more an installation by Nam June Paik or a video artwork of the 1960s or 1970s.