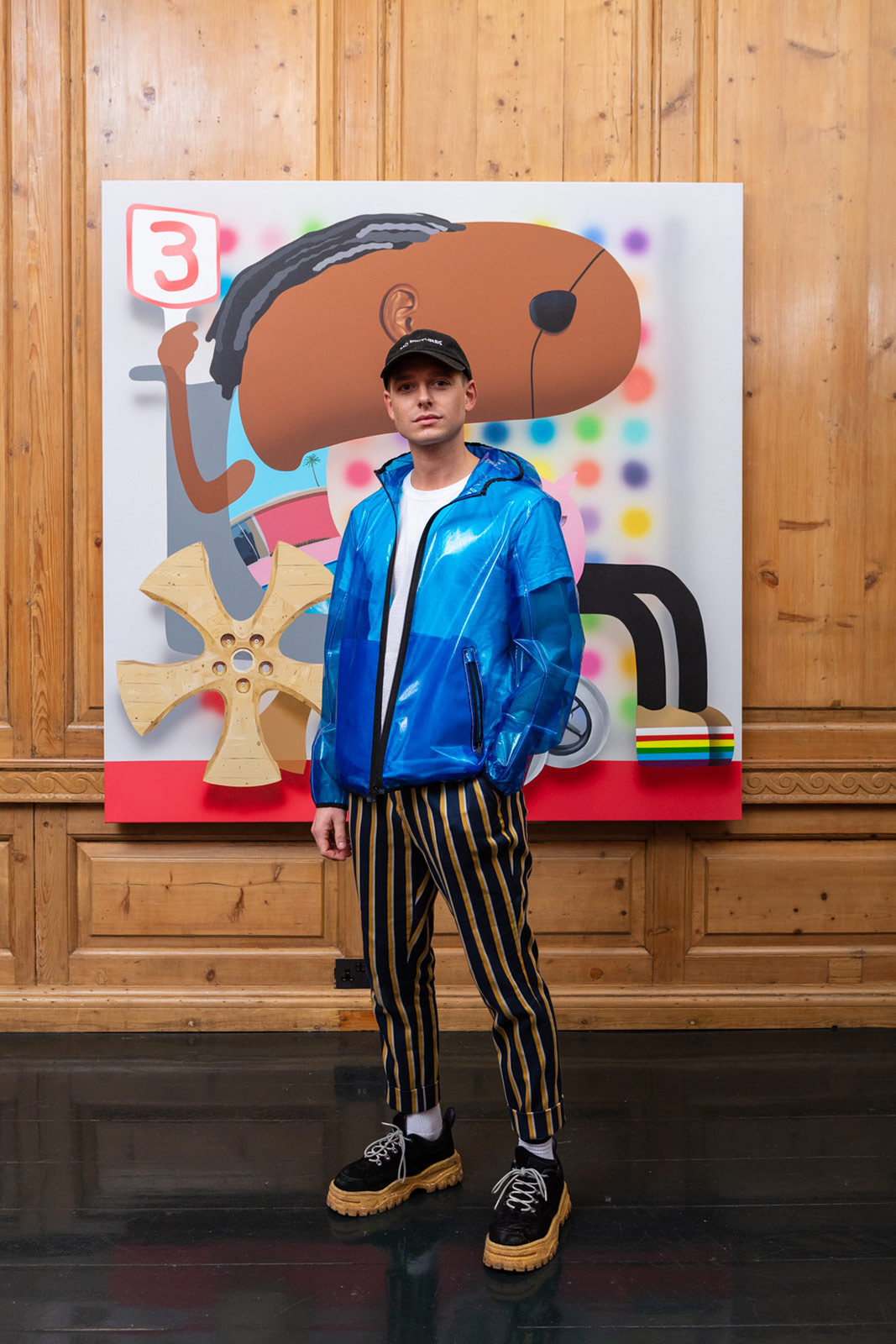 Oli Epp’s solo exhibition, Oxymoron at Carl Kostyál gallery in Savile Row (London), on view until March 3, showcases tragicomic encounters; each full of angst and vulnerability. Truth is, the artist has been driven by the notion of juxtaposition since his graduating from art school, and that the word oxymoron, specifically, was taped to his wall during my first visit to his studio with Dateagle Art in 2017. Noted down with the comment ‘familiar- unfamiliar’, it has clearly been an underlying force behind Oli’s thinking. Accompanying the exhibition is a deeply personal press release written by Harrison Pearce which re-asserts the ironical roots of Epp’s work.
Oxymoron encompasses the role of opposites: to begin with, the paintings are displayed in two separate rooms that vary in tone. The first room offers us the typical features of a white-walled gallery space, with a dense shelving unit storing a curated collection of books and other oddities. To the right, we find Vegan, or rather an almost savage angry vegan, whose flamboyant fur seems to counteract the ‘good fight’ and dismantle the 21st culinary and lifestyle cause. As do those ferocious claws that seem more pertinent for tearing apart meat than the bowl of docile tofu and asparagus.

The phallic nature of the dripping wet asparagus in Vegan allows for a smooth transition to the three-tiered Divorce Cake, where Epp, working from memories of his own relationship split, portrays a marriage in its death throes via a tongue-in-cheek chocolate delight. There are certain visual connotations within this piece that suggest a reference to Baumbach’s Oscar-tipped Marriage Story, which represents the divorce as an equalizer that turns all of those involved into versions of themselves they didn’t expect to become.

The vigorous brown shitty smears on the wall offer an explosive portrayal of slapstick anger and despair. Caught in the storm of a laugh-out-loud, cry-out-loud separation, the baker (whose behaviour indicates that she could well be the prospective ex-wife) sneaks into the kitchen, only to be caught gloriously devouring her own creation. If anything, this pursuance of instant pleasure rather highlights the complex emotional warfare between the couple and offers a compassionate depiction of human fallibility.

This sense of humour and absurdity is further highlighted in Evol Love, where two intertwined Venus flytraps are crazily giggling each other. A spotted cucumber beetle, also known to transmit viruses to plants, is crawling up one of the interlaced stems. The perspective gets close, and we see them extend their tongues towards one another in ways that words fail to describe. Following the outline of the harmonically entwined stems, a heart silhouette starts to reveal itself. Epp puns on the word ‘Evol’, which is ‘love’ spelled backwards, to highlight on the bittersweet challenges of this entangled romance: the plant's common name alludes to Venus, the Roman goddess of love, yet these bulb-like beings fail to share intimate affection as their mechanism is programmed to instantly confine and consume any insect that falls between them. 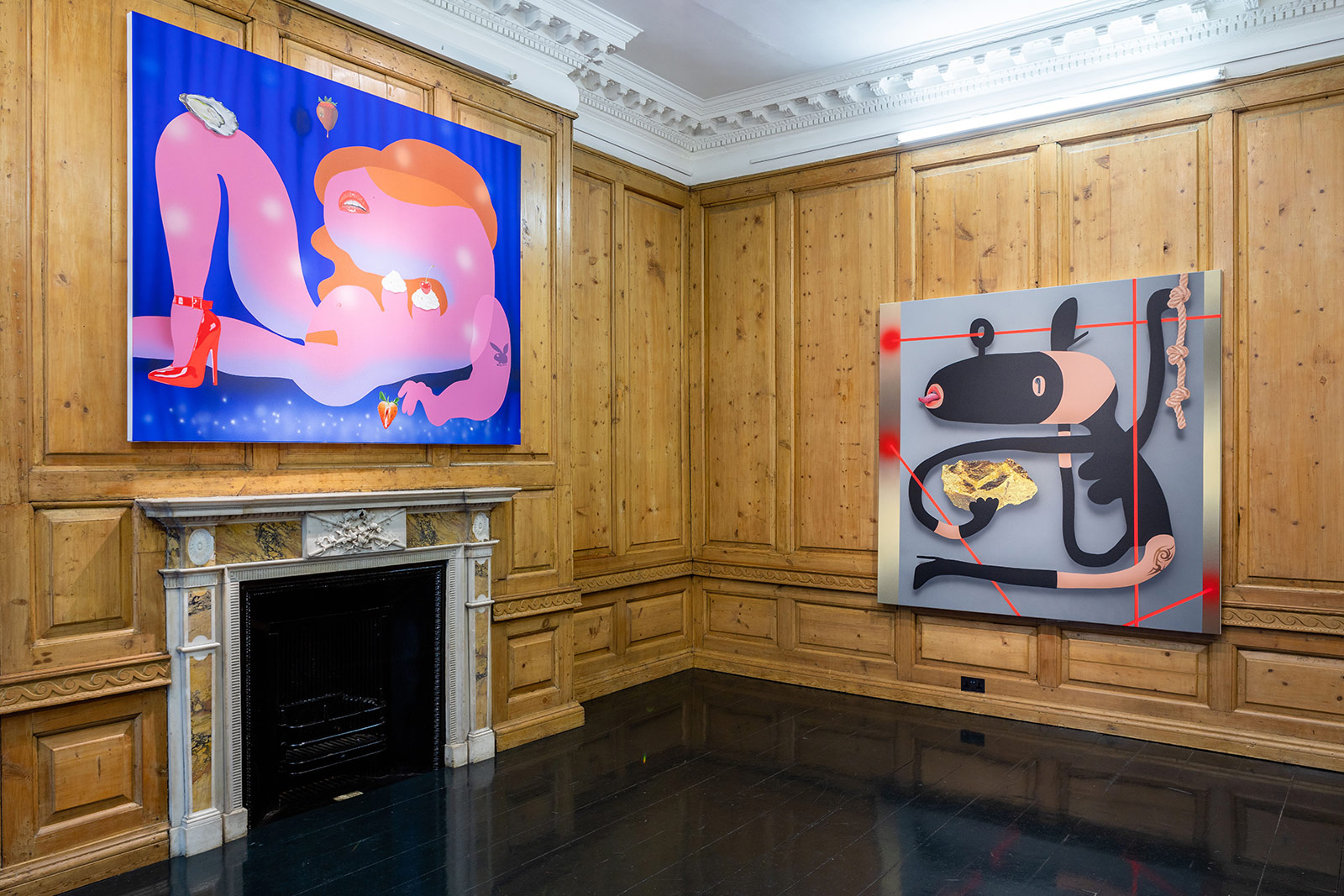 This is not the only fascinating story rooted in timeless mythology. Weirdly enough, the smooth, slender, and glossy snake-like plants that tamely coil around each other remind me to the Caduceus, medicine’s greatest symbol that also holds an unlikely twist. So with Ecosia as my guide, I undertook a crash course in Caduceus history to realise that this motif was initially representational of business, trade and negotiation, becoming the emblem of the medical profession by mistake, a controversy that not only reflects modern-day tensions in the pharmaceutical industry but also sits hand in hand with the artist’s own relationship with the financial machinations of the art business. Paddle is marked by that torment, accentuating the opaque operations of a mostly privately held and unregulated market.

Entering the main room in the Savile Row exhibition space, the wooden panelled gives the feel of an Edwardian billiards room. Paddle captures an elusive portrait of a supervillain art collector prestige – one with bad eyes but good ears– The works by Hirst, Hockney and Hollen are framed along as props in the play of conspicuous consumption. (Oli captures them at the height of their exuberance, and in this case, they become the embodiment of the wealth within the more commercial industry.) The figure in the painting has a likeness to the villains in Austin Powers. Depicting the idea of Dr Evil, holding an emotionless cat (the accessory of choice for evil masterminds), the eye patch of his counterpart Number 2; and a comment and obvious disgruntlement of being second-best to the ‘market’ and the politics of art.

A mild and almost naive reference to the supervillain, this Austin Powers comparison gives some comical relief to the situation; almost as though Oli is taking the piss out of himself and his battle with exploitation, revealing his opinions on the struggle of art over commerce and the relationship between artist and collector. Capitalism is great at making people crave things they don’t need, and of course, this is what we should expect from a system that runs on the basis of production and consumption. Paddle is a personal representation on the currency-focused, money-driven intentions of the elite players in the market, where the strategic art collector is blindly bidding for trends, destined to live in a consumerist dystopia.

The work highlights the dangers associated with pieces being sold for profits, indicating that artists can become brands, more likely to give only what is expected. Raising inquisitions about whether money is a catalyst for great art vs art being a catalyst for money in a culture driven by consumerism. Informed by the soundtrack of Who Framed Roger Rabbit, titled Why Don’t You Do It Right Anyways, and with lyrics pointing out to ‘get me some money too’ further alludes to the idea of irresponsibilities with money. 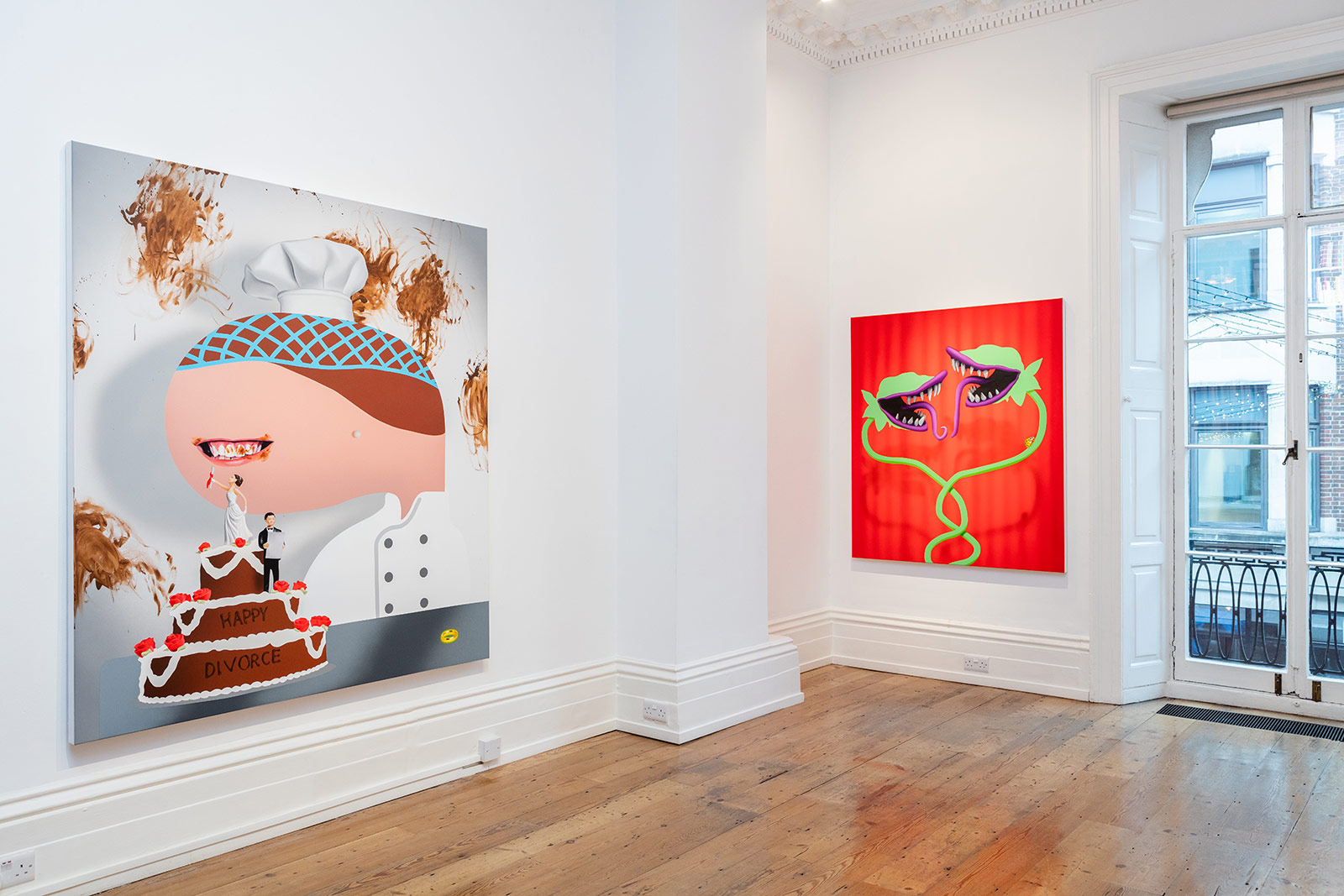 Like the Renaissance artworks from the 17th century, Oli uses exuberant detail, deep colour and grandeur to achieve a sense of awe in Aphrodisiac. The nude figure who dreams of sexual desirability falls short however, instead, holding onto a rotten sense of self-worth and belonging. Like Velazquez’s, Rokeby Venus, she is posing for the viewer ensuing a sense of voyeurism with a suggestive gaze. Borrowing the intertwined forms of Blue Nude from Matisse, the painting is fiery, provocative and sexy. No wonder, having been placed above the fireplace, Aphrodisiac warms up the room. Seemingly pleasurable, the heart palpitates, but be warned there is more than first meets the eye.

Green mould permeates the oyster as ants and flies traipse the strawberries and the redolently placed cherry has become nothing more than the breeding ground of a sweet seeking worm. Oli has taken each seductive element and made them unpleasurable, unwanted and insipid. With Why Don’t You Do It Right from Who Framed Roger Rabbit still playing on repeat during its creation, the character resembles the hyper-sexualised cartoon, Jessica Rabbit. Bloated, swollen and rougher than her predecessor, she exaggerates the notion of unsatisfactory delights and the non-erotic. Despite this, Oli’s figure is still a sultry femme fatale with the ability to chastise her male counterparts. With rumours slowed frames (from the film) reveal a nude Jessica, the concept of sexualisation of a non-human is emphasised and paths the way for the fetishism of the un-gendered; linking to the forms Oli presents.

The sexual objectification persists with the almost excessive use of shine on the lips and heels – or is she just sweltering under the lights of the stage she appears to be on? Melting under the gaze of the onlookers. With her arm propped up to hold the weight of her naked body, there is yet another symbol of sensual innuendo; a cultural comment on the 2000s, the playboy bunny. A reference that Hugh Hefner, editor-in-chief of Playboy magazine, described as a “Humorous sexual connotation” that was “frisky and playful”. The rabbit’s symbolism has a somewhat erotic overtone – shy, vivacious and aligns with the overtly sexualised food, all aphrodisiacs in their own right. Yet, once more, not to be dismissed, the inclusion of insects as in Evol Love. Small insertions of reality amongst the allegedly desirable; a reminder that not everything is what it seems.

Yet another masked figure broaching the subject of production and consumption; Fool’s Gold depicts an audacious supervillain on a solo heist for what he foolishly mistakes for something of value. Weaving in a labyrinthine of lasers, tittering on the edge of danger for nothing more than a lump of iron sulphide. Caught off guard by the stone’s superficial resemblance to gold, the figure is soon to join the collective despair of the 1840s US miners who had to give up the concept of living out their lives as multimillionaires. An orchestrated criminal of monkey-like proportions, there is a direct correlation to that of Tom Cruise in Mission Impossible. Suspended, tense and clammy; dripping with the weight of what could play out next. 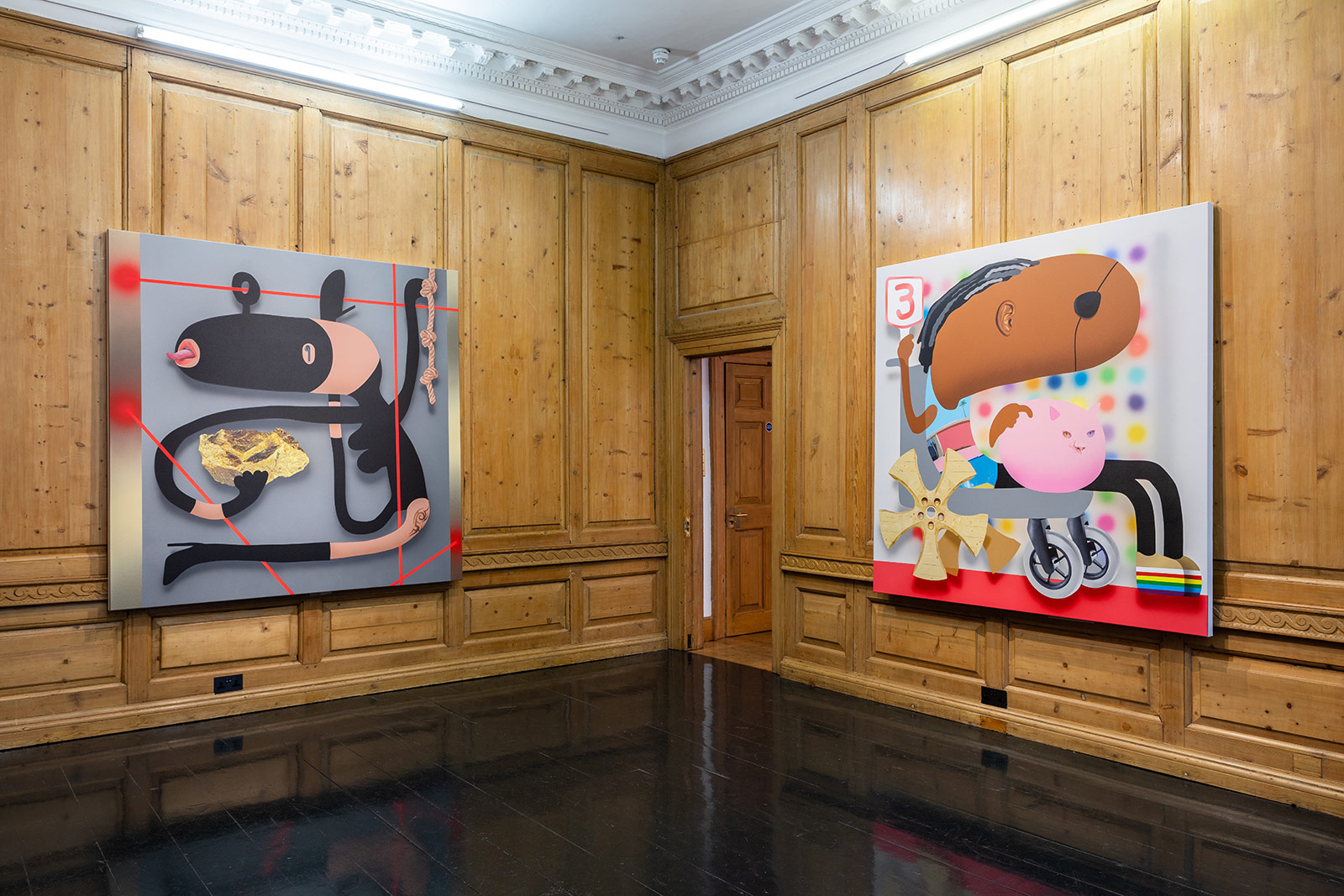 Adorned within the one-piece asymmetrical catsuit, Oli plays on the notion of revealing and concealing and, in turn, lays bare the mark of a rite of passage, social status and cultural commentary with the tribal tattoo. Agile, flexible and elastic, one arm encircles the pyrite in a paranoid safety net of limbs, while the other reaches for a knotted rope. Although the desired use is largely unknown, we are left to wonder about the clear connotations to suicide, playing also on the use of metaphor to represent complexity, confusion and hidden secrets. Somewhat contradictory as the knot was said to personify the notion of love and eternity. Full of melancholy expression, the addition of the rope alludes to the more traditional material-based forms of art production.

The bittersweet anomaly is yet again a focus for Oli. The push and pull of the art industry and the concept of the supervillain. Swaying back and forth between the balance of freedom and compliance or giving in to the inevitable. With his iconic use of anthropoid characters full of agitated nostalgia, Epp’s grotesque and beautiful characters still compete and the images remain full of visceral drama and enhanced colours. Oxymoron is a diverse landscape, a 21st-century playground of anxieties, consumption and identity.

It is within this boiling pot of personal struggles that his somewhat pessimistic characters continue to tug on our own insecurities, winning over our sympathies, as neither character really seems like they belong in the role that they serve. We continue to be bathed in the bright, artificial colour dripping from each piece, somehow wanting more and more. Much like the incendiary central performance by Joaquin Phoenix in Joker, Oli looks set to have the last laugh.
The exhibition Oxymoron by Oli Epp is on view until March 3 at Carl Kostyál gallery, 12A Savile Row, London. 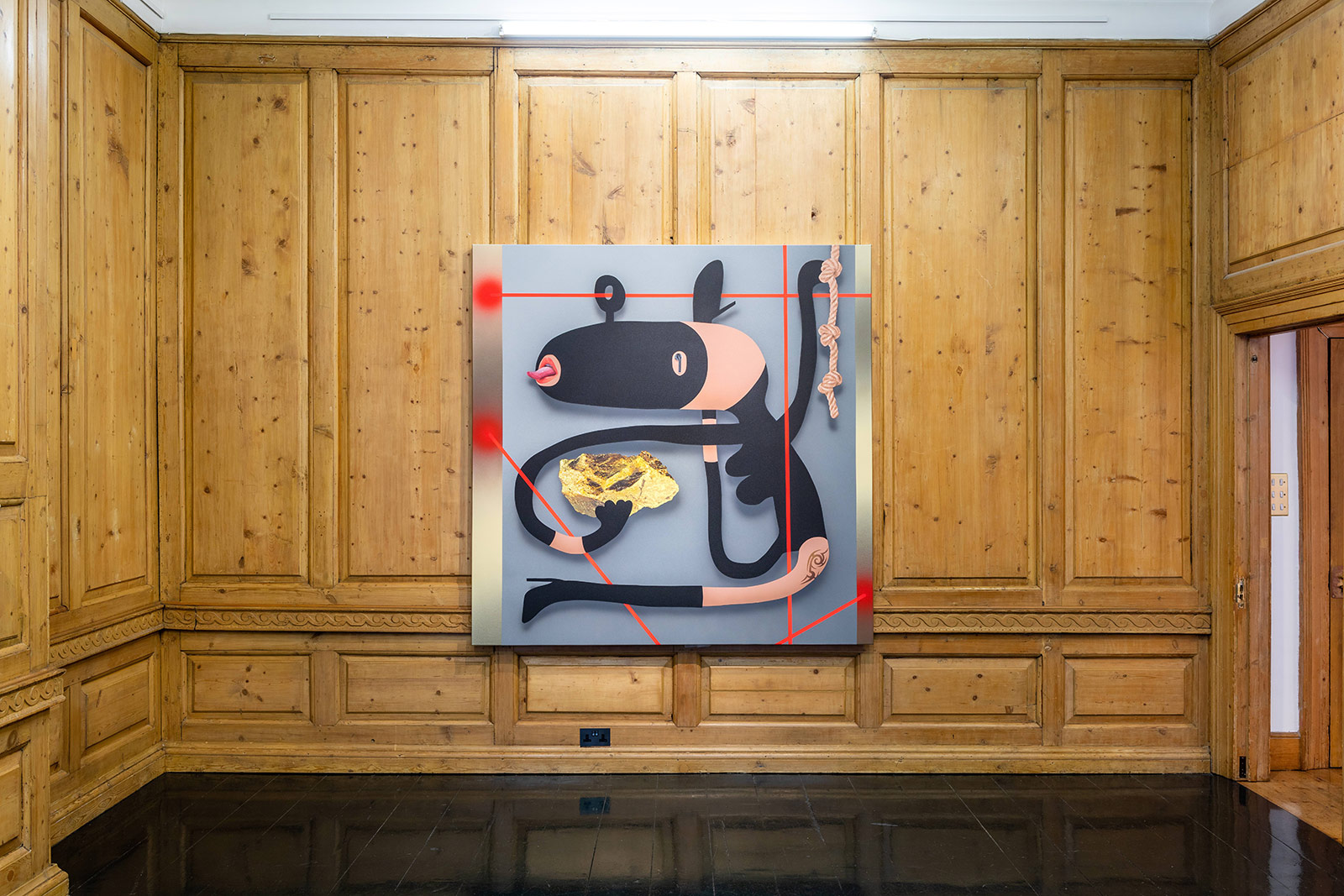 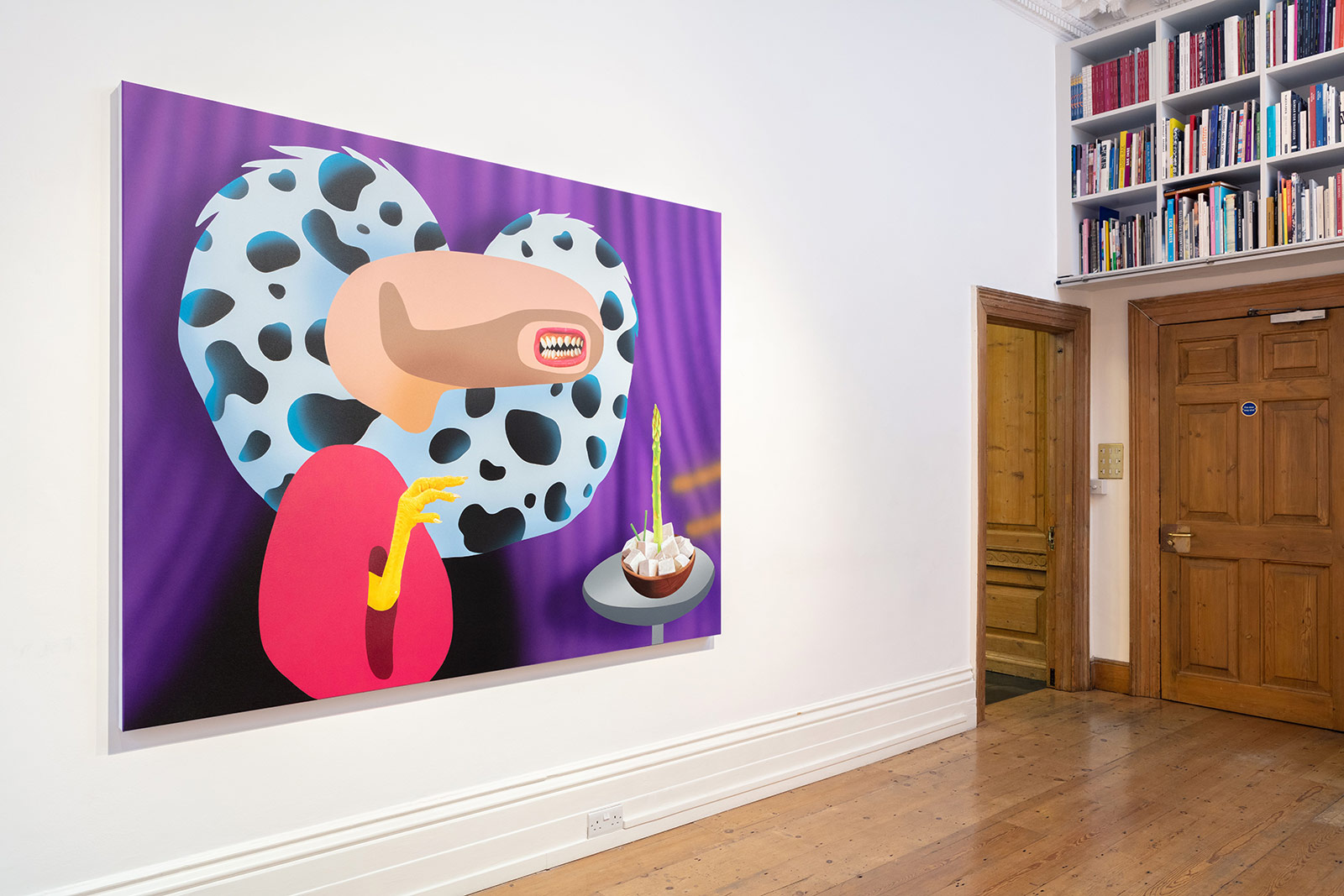 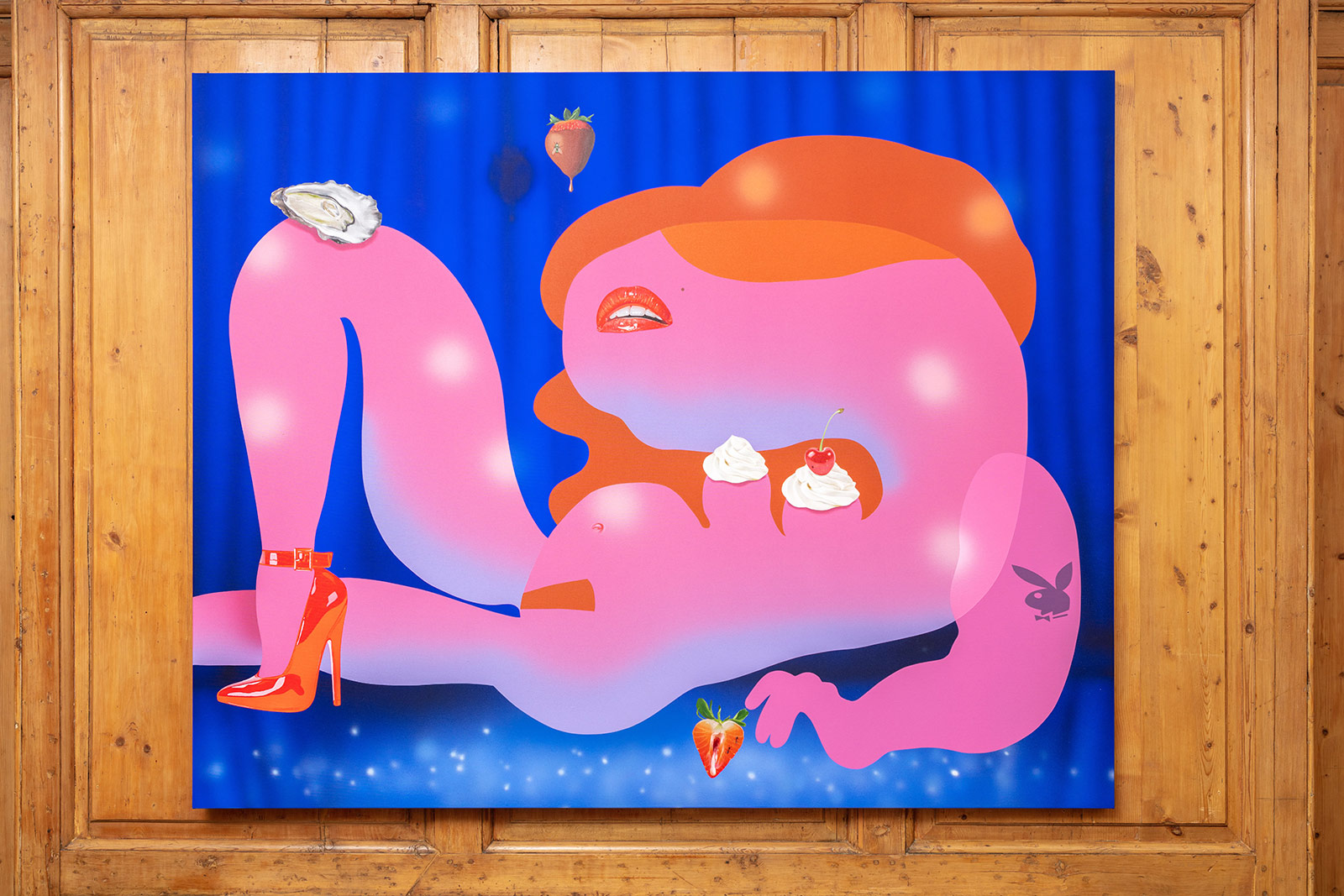