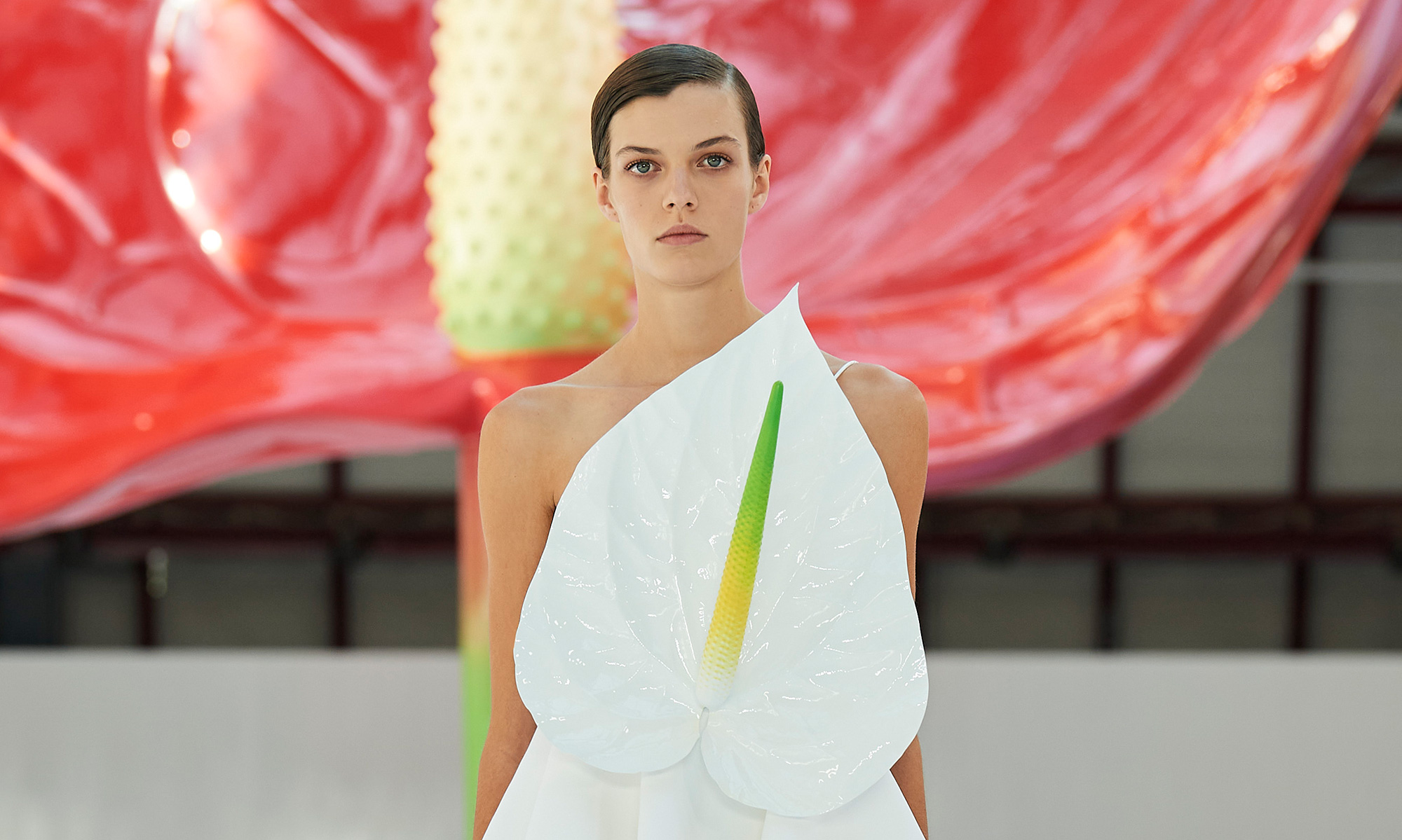 Jonathan Anderson’s approach is governed by his ability to interweave concepts of modernism and fantasticality to imagine contemporary possibilities for luxury design. For Fall/Winter 2022 ready-to-wear, the Creative Director experimented with impressions of surrealism, fitting balloons onto shoes and cars underneath dresses. And in order to engineer his Spring/Summer 2023 Menswear collection, he cultivated live plants in collaboration with Spanish bio-designer Paula Ulargui Escalona growing them from sodden garments and footwear, his designs influenced by “a fusion of the organic and the fabricated.”
The Creative Director dedicated the Loewe SpringSummer 2023 collection, staged at the La Garde Républicaine show space Paris, to his experimentation of the silhouette, constructing impressionistic proportions characterised by “line, colour, shape.” Inspired by the architectural structure of the titanic anthurium flower which bloomed from the middle of the floor, “a product of nature that looks like an object of design, and treated as such,” read the show notes. The introductory look, worn by actress Taylor Russell featured an imitation of the bloom, fitted on a heel, and a black velvet dress, the silhouette exaggeratedly influenced by the panniers jutting from it’s hips. Models followed emerging from the floorspace, wearing expressionist imitations of the flower, sprouting from bodices and planted on the straps of shoes.

His ambition of looking to imagine and design the boldly unconventional, by subverting the stereotypical, additionally extended into casualwear, crescent knitwear necklines had been dramatically extended and pulled up to partially obscure model’s faces, décolletages of slip dresses came layered and spiked, distortedly suspended from triangular wire outlines. And picking up on the thread, sewn in his foregone collection, the Creative Director additionally introduced footwear surrealistically covered in deflated balloons.

By playing on the boundaries which govern design, exemplified by his inclusion of a simplistic t-shirt traced in black ‘pixels’ and shadowed to give the impression of movement, paired with khaki pants embossed to materialise as blurry and pixelated. Anderson’s Spring/Summer 2023 collection challenged the parametres which govern wearability and functionality, reality and artifice. 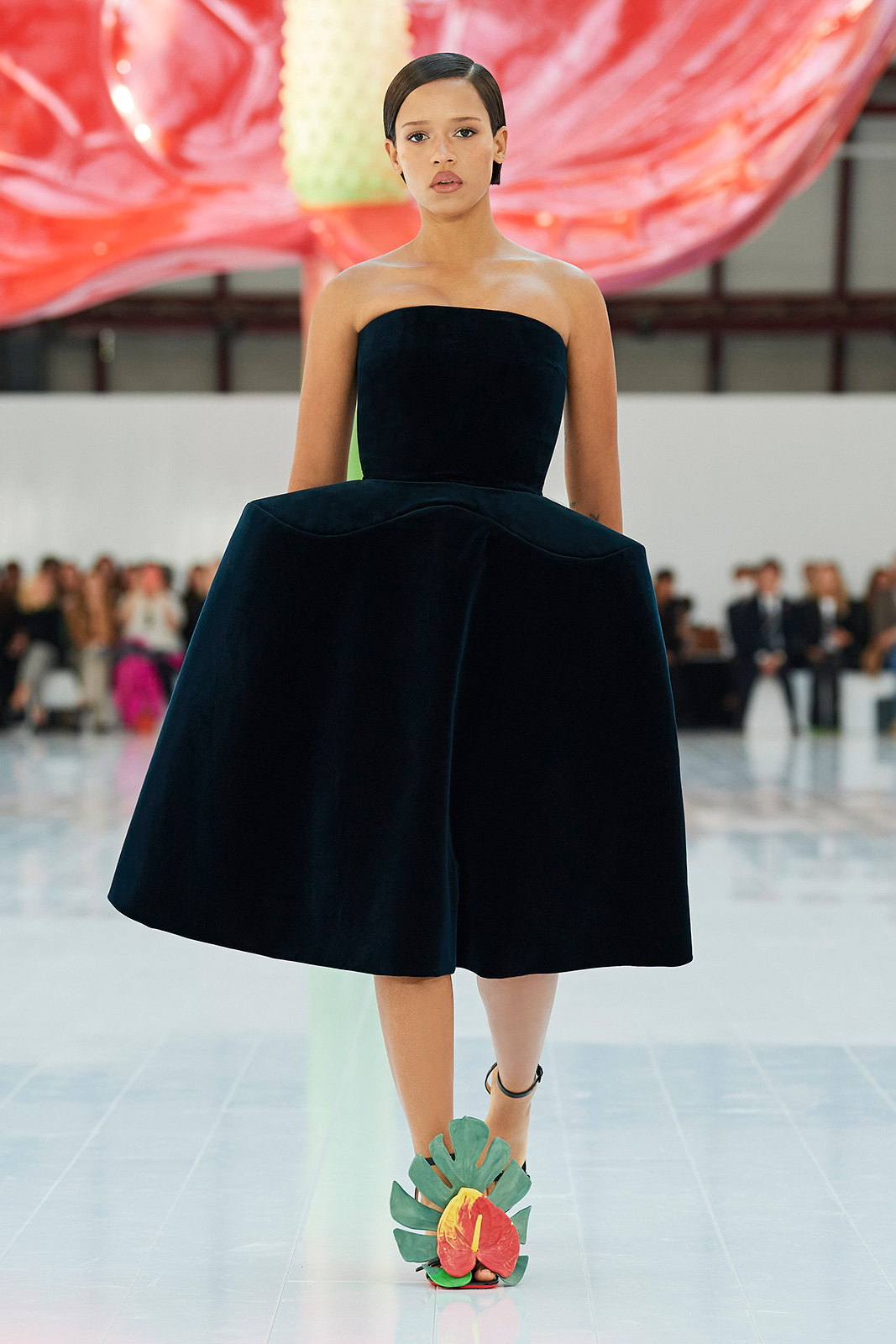 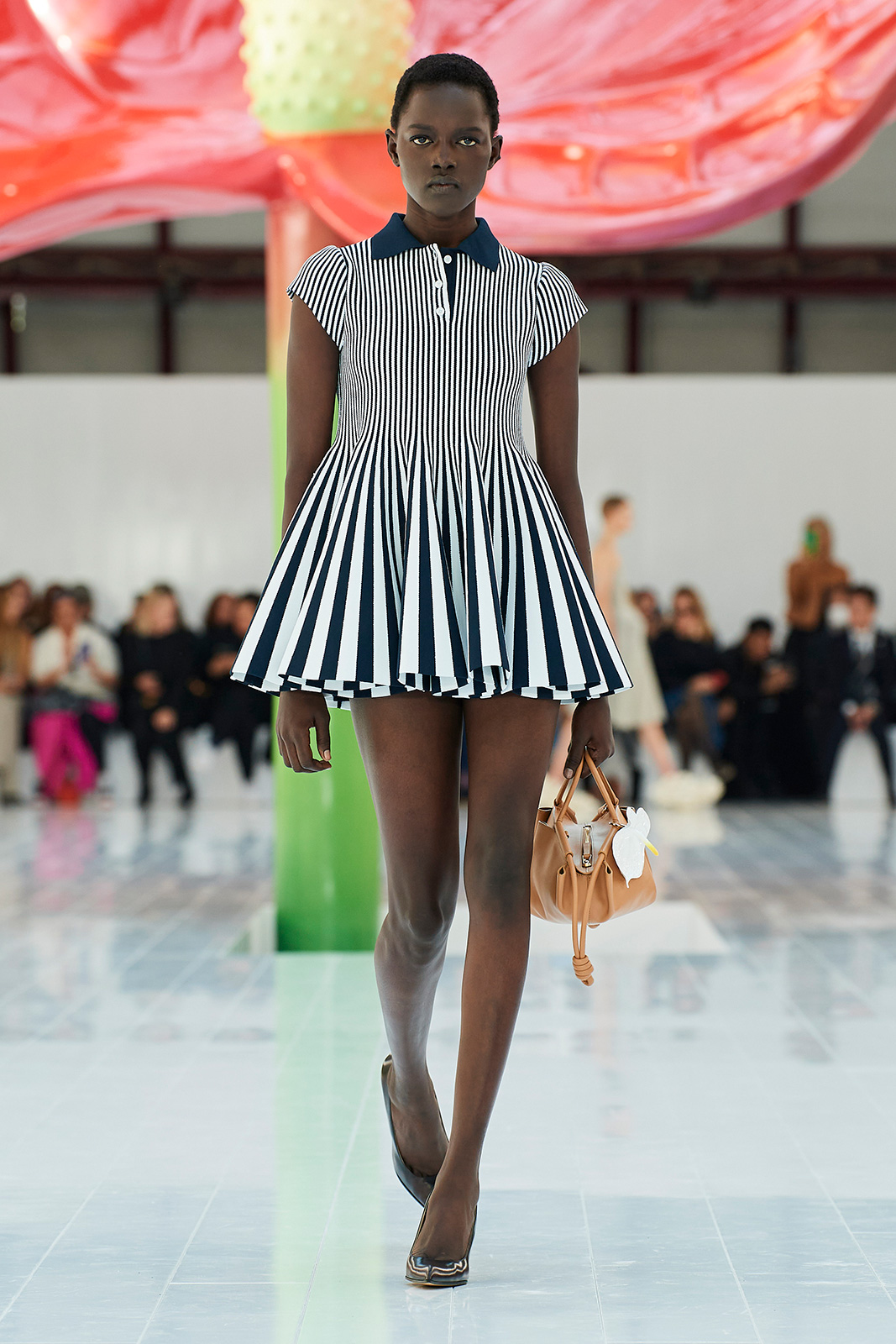 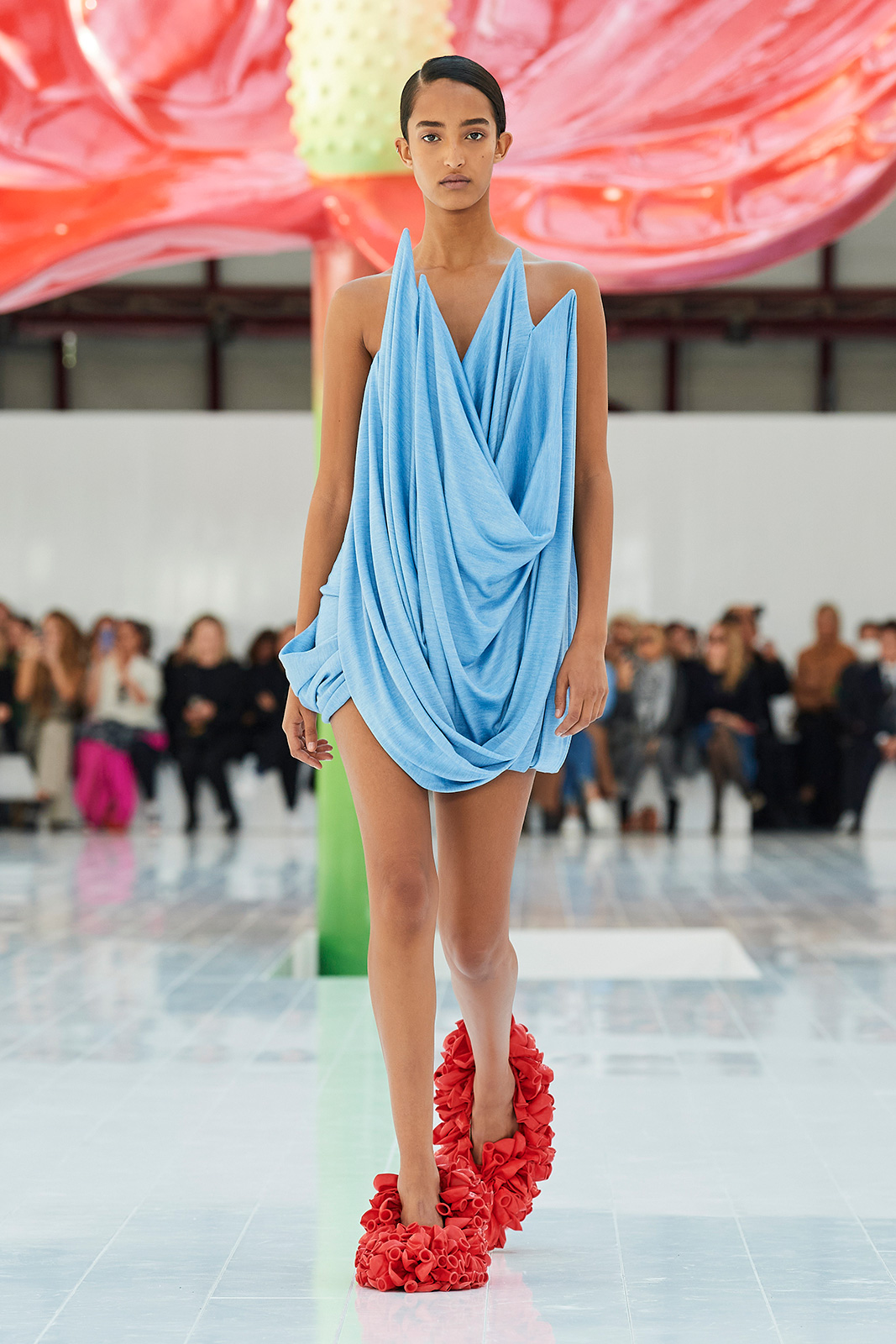 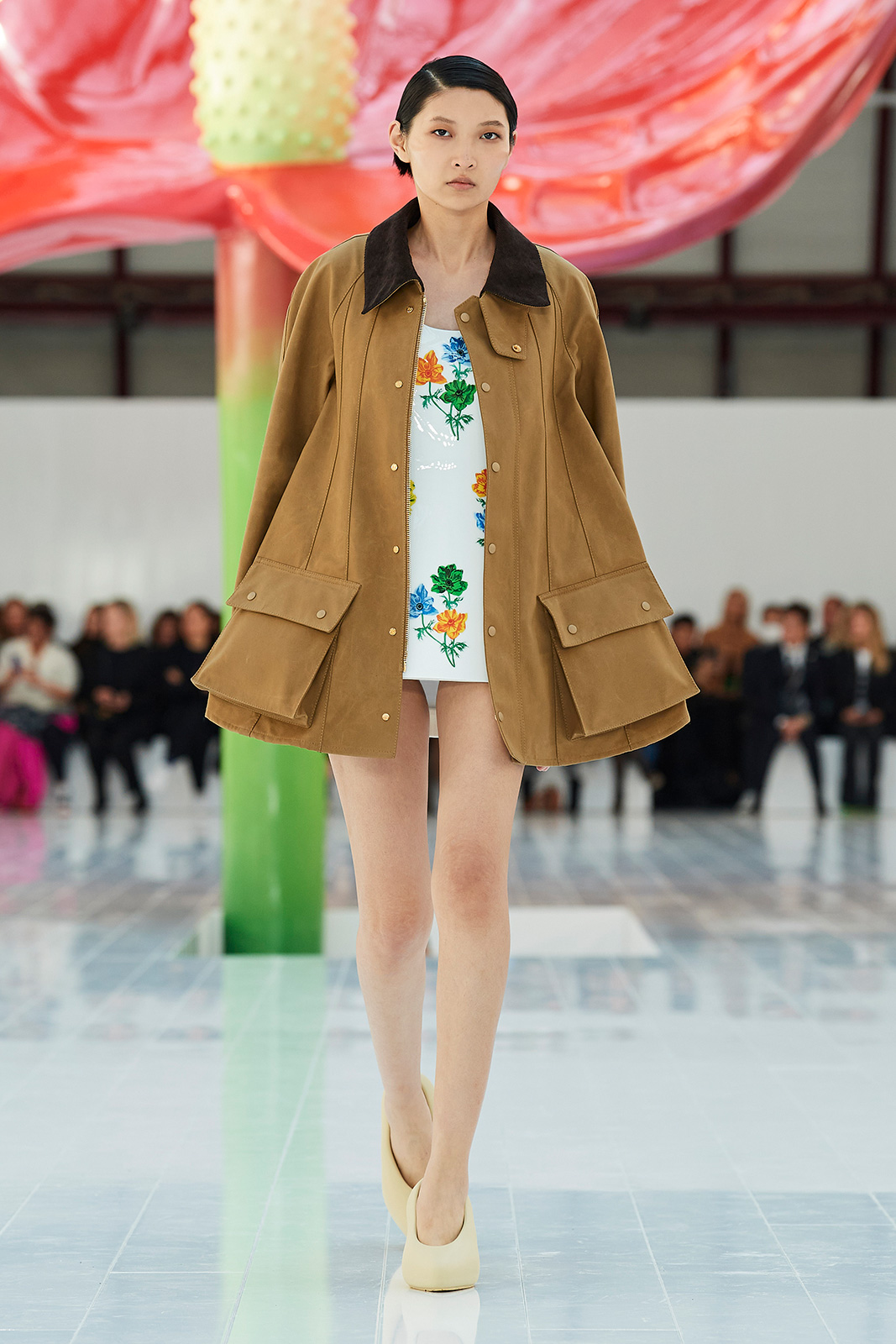 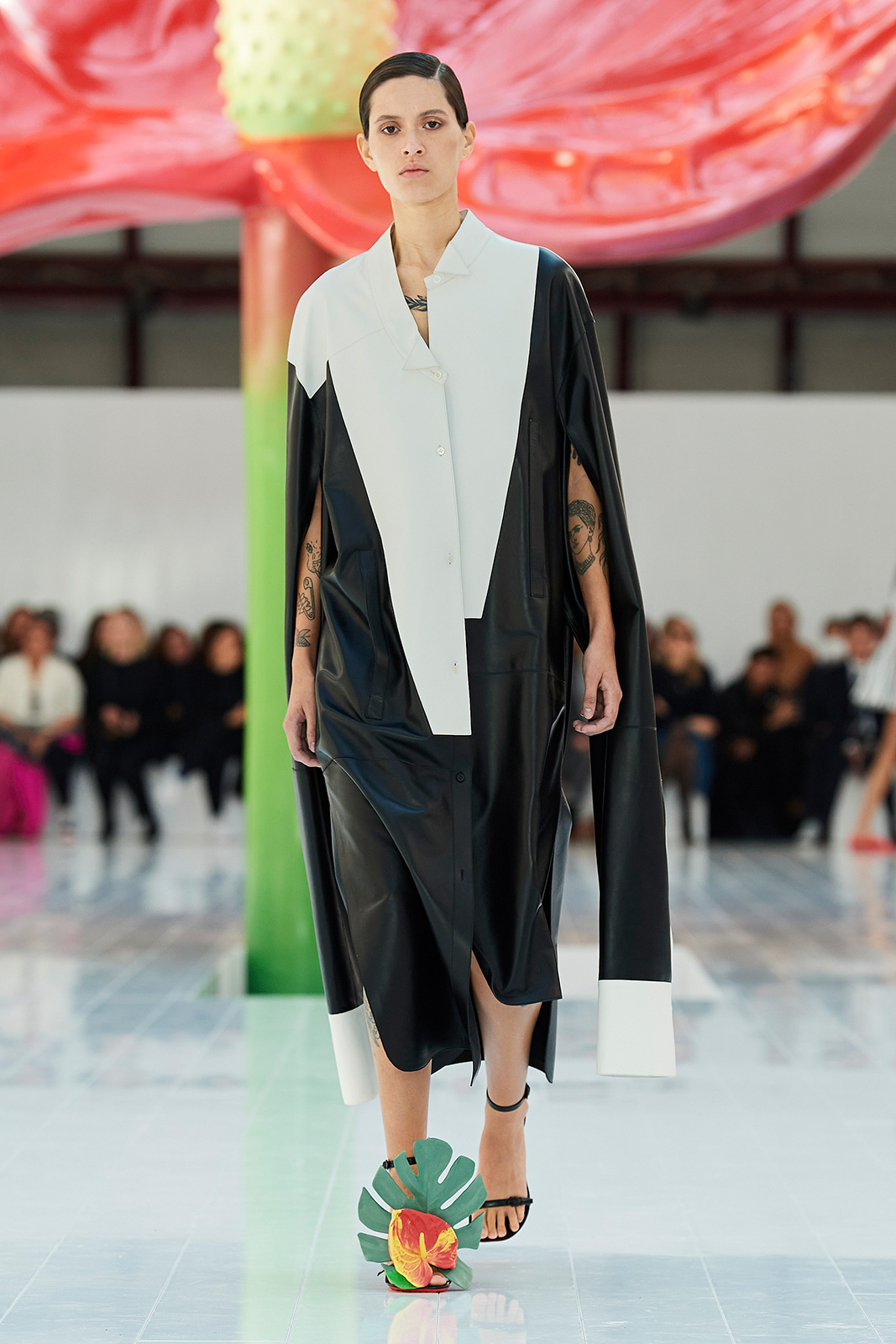 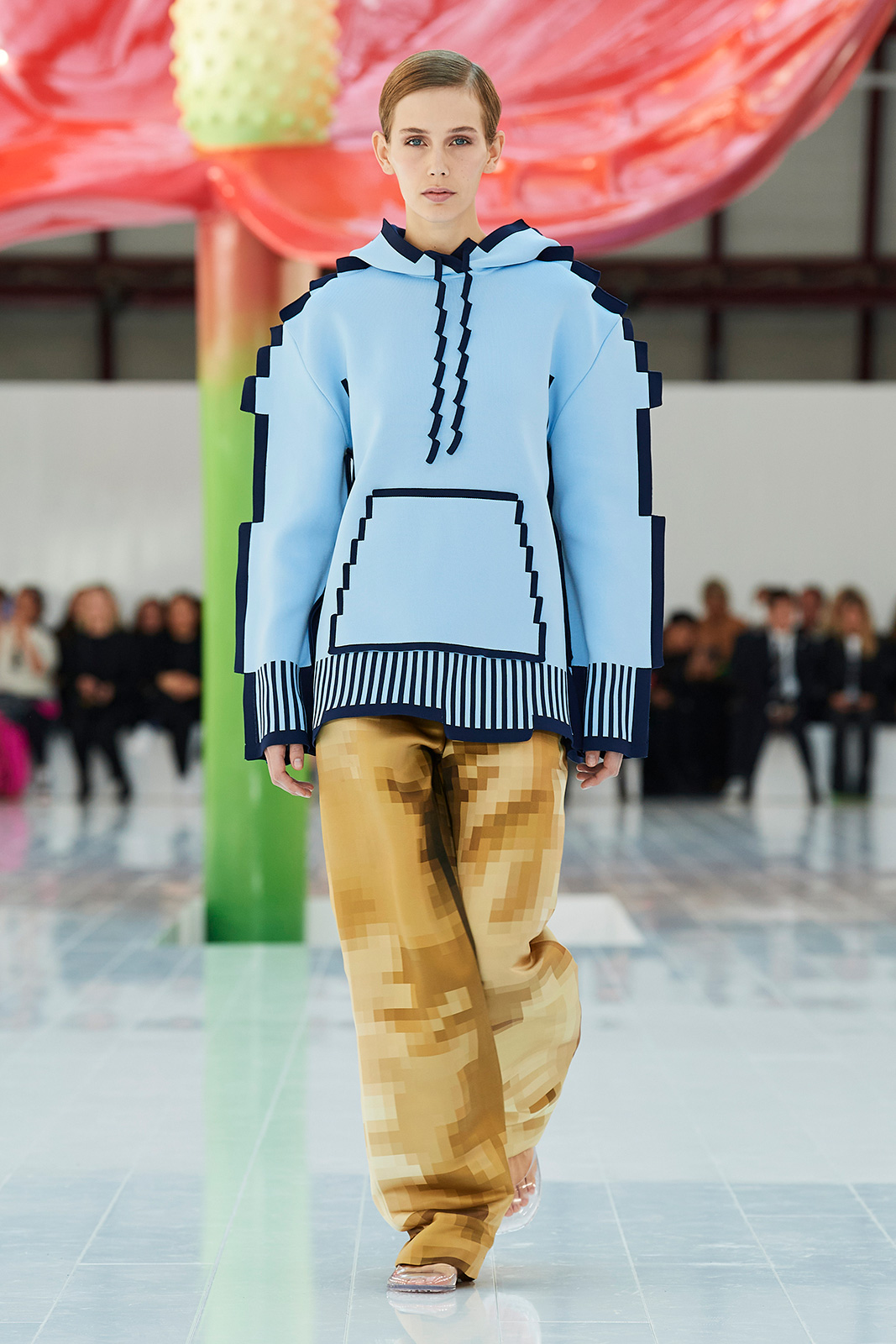 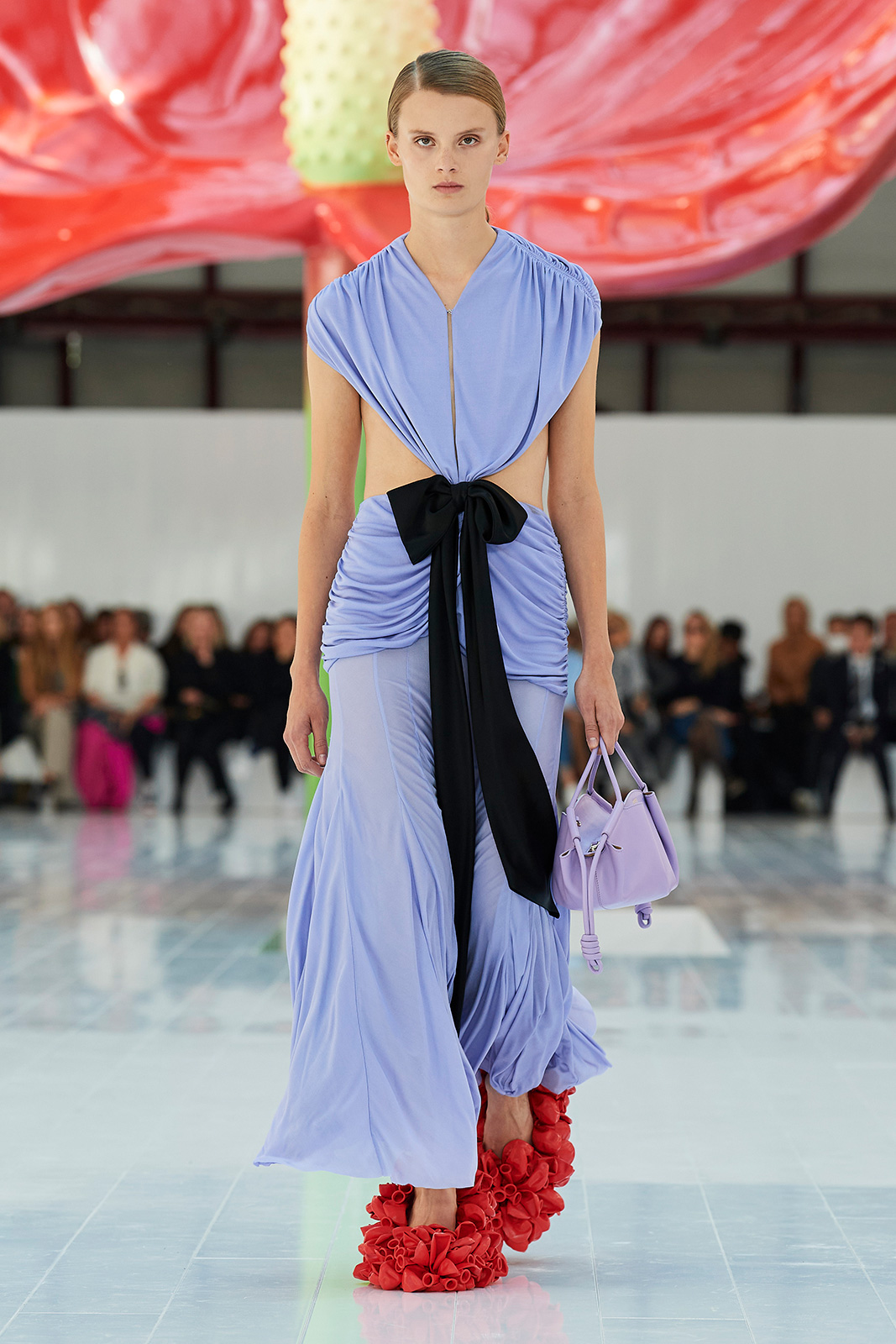 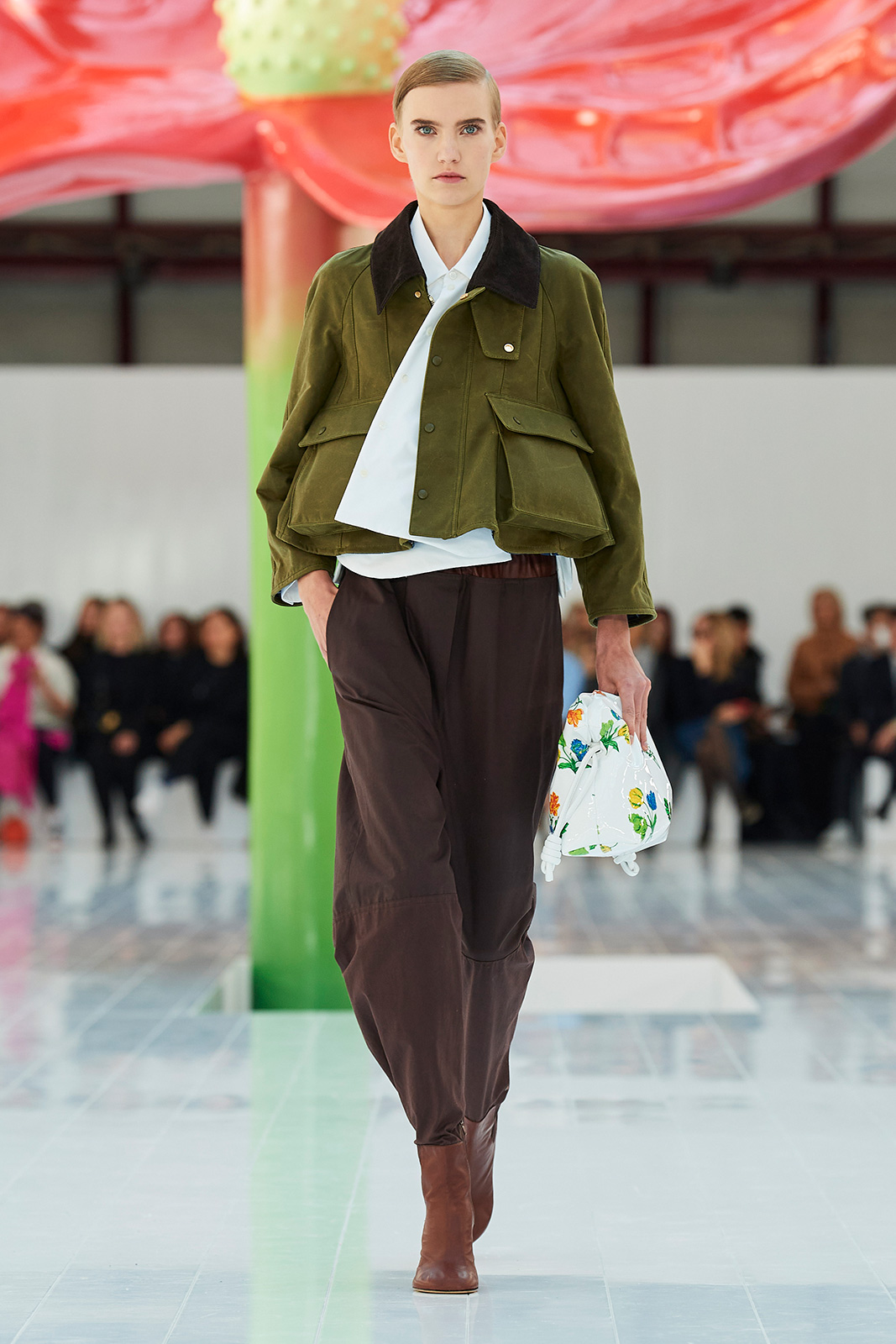 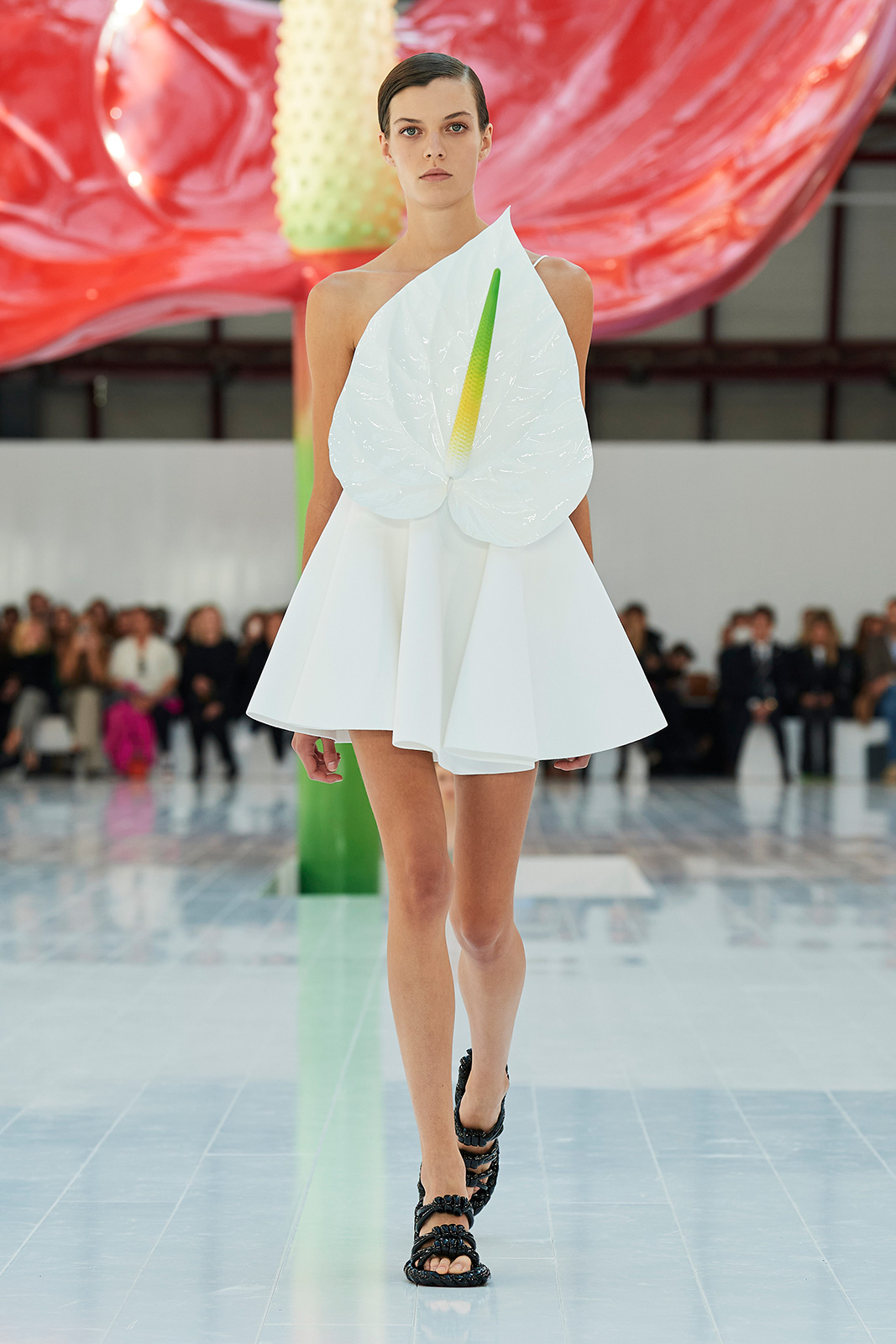 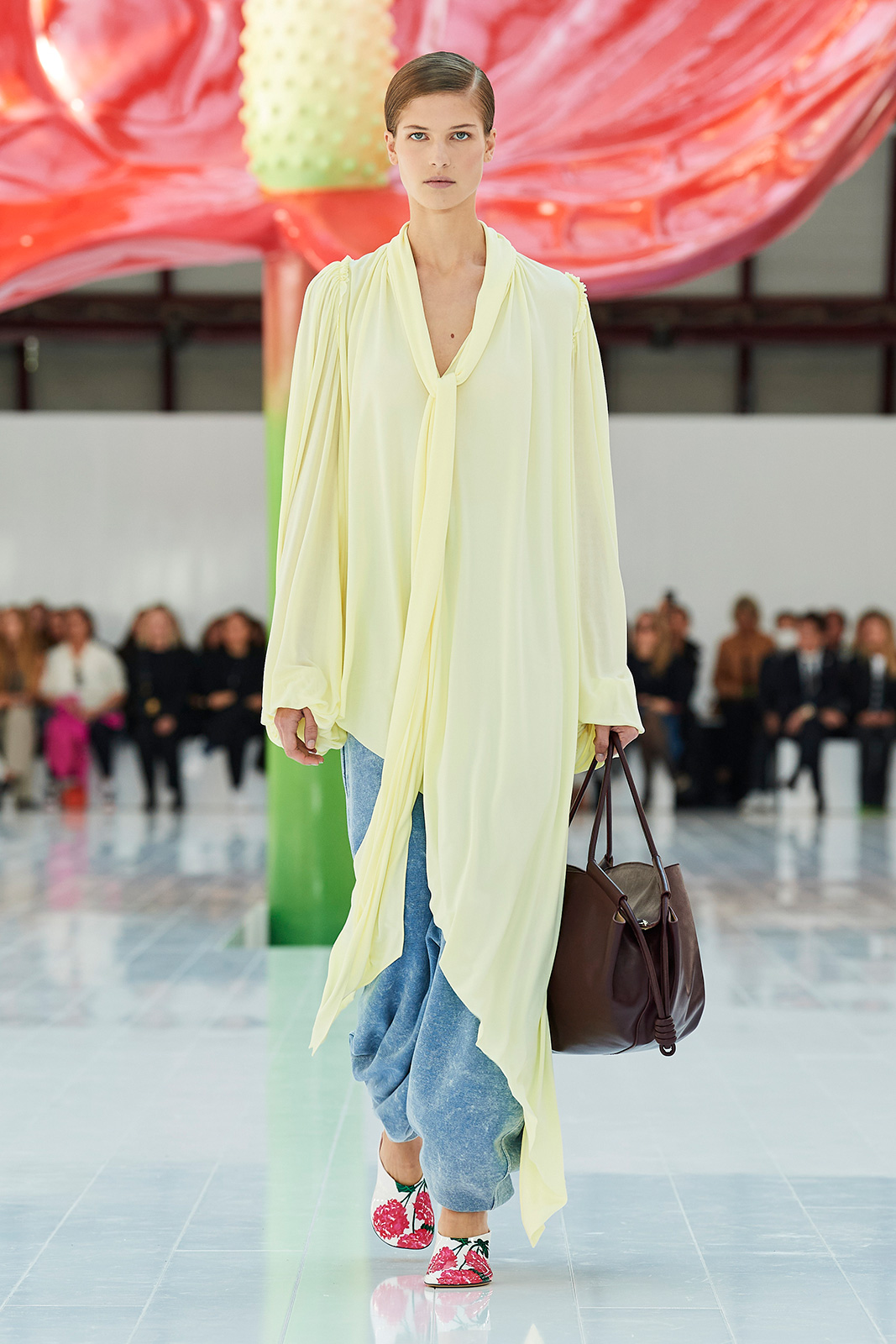