Evocative and brooding, Leto (‘summer’ in Russian) is a sexy love letter to ‘the good old days’. Director Kirill Serebrennikov wistfully looks back at his youth in 1980s Leningrad – an idealised balancing act between liberal rock and roll western culture and communist equality. He locates it as “The last summer before the Perestroika (reformation of Communism) towards contemporary Russia”.
Directly aimed at failing executions of both capitalism and communism, this film targets an international feeling of ennui through a very specific moment in Russian history. Still on house arrest, after Putin’s cultural advisors decided Serebrennikov had been carrying out “embezzlement”, his press release dates from 2017, written before the end of shooting whilst he was still allowed free speech. Leto shares a rather vocal anti-Putin stance on the world stage.

The subtleties of the film could be lost on those who don’t have any prior knowledge of the cultural moment in ‘80s and ‘90s Russia – leading up to the drastic cultural change from conservative orthodox control to today’s consumerist anti-gay, patriarchal society. Fledgling countercultural groups in 1980s Russia led to a crescendo in the ‘90s of cultural liberation, rebellion and discovery: new music, drugs, fashion and anarchic hedonism. Leto records the fleeting moment of freedom from cultural oppressions in the shadows of Leningrad’s black-markets, living rooms and highly censored Rock Club. This way, he advocates for today’s youth to re-find their voices, like the lead characters whose lyrics remember counter-cultural revelry, only escaping censorship by calling it comedy.

Despite being described as lacking in plot and an “almost story-less evocation of mood” by The Guardian, the film’s slow-moving musing is totally absorbing. Serebrennikov carefully depicts the underground beginnings of cultural rebellion – stylish youths listening to Talking Heads, The Velvet Underground, Blondie, Bowie and T-Rex. We follow a group of chain-smoking, partying rockers and punks enamoured with their music idol, Mike (Roman Bilyk), and his wife, “the beautiful Natasha” (Irina Starshenbaum). 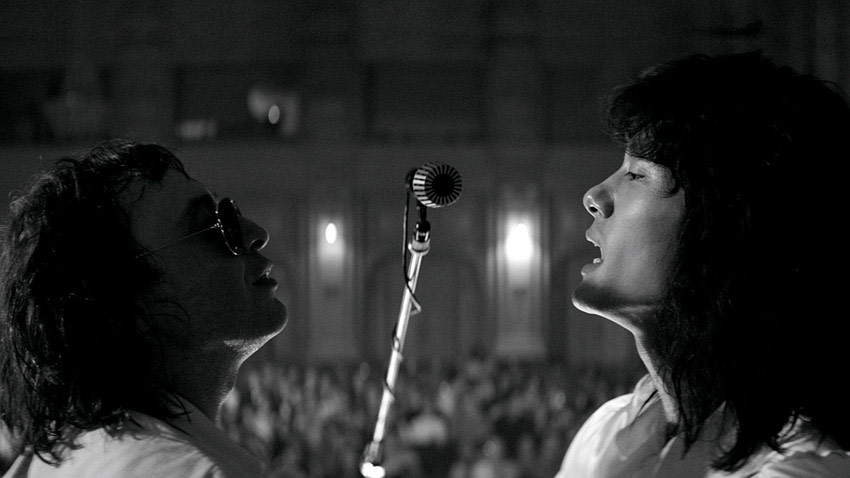 Music protégé Viktor (Teo Yoo) forms a love triangle with the couple that sadly remains in a rather hetero sphere – although we do see one lesbian kiss in the film. Leto perfectly captures the feeling of alternative music scenes. It is an inky black and white illustration of youth, friendship and partying that evokes my own memories of smoke-thick rooms in the early hours with some musician who’s turned up in town. Serebrennikov injects the film with a few dreamy coloured scenes and child-like illustrations that accompany moments of imaginary renditions of classic rock songs. Often, a character in modern dress jarringly interjects “this didn’t actually happen” after such sequences – a reminder of cultural control in the Soviet Union and now.

Leto is a real-life story re-constructed from the memories of Natasha. Yet, the director edits out any female interaction, with not a single audible dialogue between female characters – a problematic, sexist element to this otherwise revolutionary film. The song Leto, breathily delivered by Mike (Roman Bilyk) on the beach, summarises the mood. He sketches an ideal time of creative freedom from censorship, and personal freedom from capitalism. “No money, but I’ve got time. And I don’t need money anyway.”

Leto is a beautifully stylish film with an important political undercurrent. Serebrennikov says, “We are breathing life into a culture that is unacceptable to those in power, for the cultural directors of our government, exactly the same way that Leningrad in 1983 was not a time or a place for rock culture in the Soviet Union”. Like Clayton Vomero, the director of Russian documentary/film 3oha, Serebrennikov seems to draw strong comparisons between the capitalist state and the communist state – currently, two synonyms of false freedom.
The film Leto by Kirill Serebrennikov arrives on Spanish cinemas from April 26.