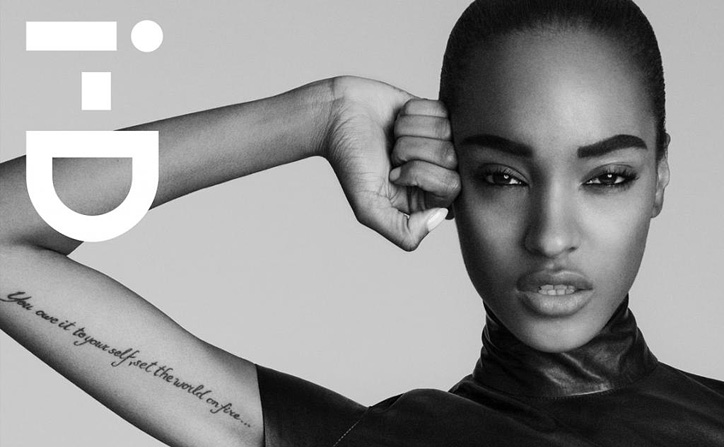 A year ago next month, and 33 years after the first hand-stapled publication of this print powerhouse, VICE Media bought i-D magazine. It came as quite a shock to some, in a sense that 'no one should touch the sanctity of i-D and everything it stands for'. But of course, they couldn't stay behind and keep feeding off their offline print strength. Publications like Dazed & Confused, whose online presence has proven to be very successful and well thought through, were too strong a competition to not catch up to. VICE – who even share offices with i-D in London now – is at the forefront of creating unique online platforms (Noisey, Creators Project,etc). So the once skate-zine turned media corporation, seemed to be the right partner for an online take-over. Apparently it took them a year but seeing the result of VICE's digital know-how and i-D's editorial voice, it was worth the wait!

As Holly Shackleton – i-D editor - puts it, “The site is so much more than a magazine brought to life; it’s the go-to destination for a global community of fashion fans who heard it here first.” With fashion film becoming more and more powerful as a medium, anyone who’s launching a new platform, (especially having based it on an existing institution), needs a solid base of video content to illustrate and support their style. i-D.co presents a bundle of video series such as the fun and cute A-Z guide, More Than A Model and Think Aloud.

A completely new user experience and personalized navigation – which, to be honest, might take some time getting used to – will guide you through videos, top 5-lists, in-depth interviews, short news bits (reminiscent of Vice's tidbits) and so called 'think pieces' – one of them aptly titled “Is internet the new street?”. Of course they couldn't leave out the 'community' theme either – everyone and everything being able to contribute and feel part of the fashion world through social media and the blogosphere. In the 'look' section, anyone can upload and contribute photos on a designated theme via hashtags on Instagram, and the submitted images will join those of the editorial team on the site.

To give the big online launch an extra big bang, i-D teamed up with none other than M.I.A., creating a bomb of a video, in collaboration with Kenzo (who else) and directed by Daniel Sannwald. The Matangi Godess, entering the i-D Temple, I don't think anyone could dream of a better match: London, strong opinions, inimitable style, groundbreaking non-mainstream pioneers, no need to elaborate further. Adding to that, the song's message Y.A.L.A. (You Always Live Again) is a fitting motto for i-D's online rebirth and makes M.I.A. / Maya / Matangi the ultimate ambassador.