Boldness beyond the binary 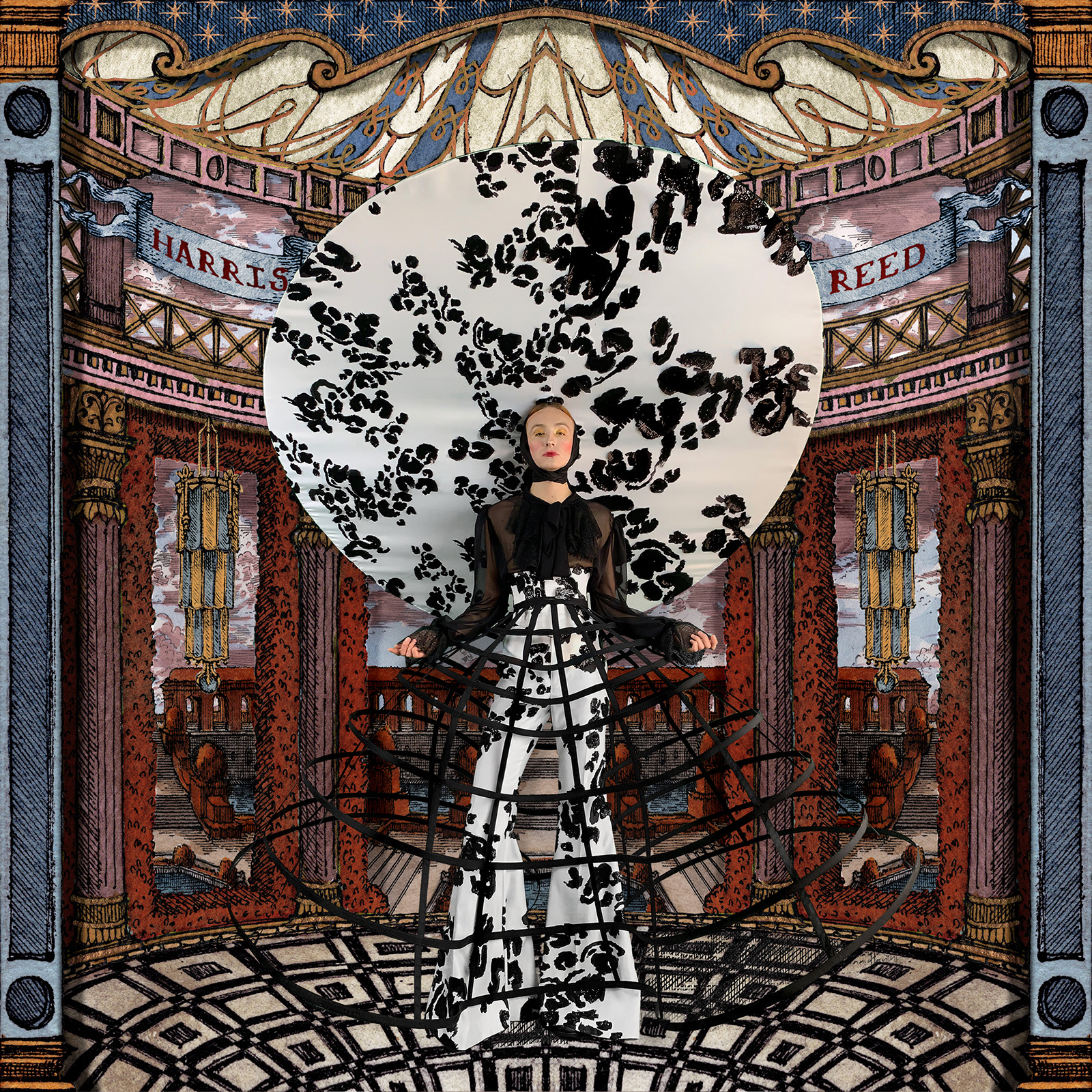 Playing with fluidity and self-expression in all its forms, Harris Reed is the visionary designer fighting toxic masculinity and patriarchal prejudice. Well-known for the duality of their sharp and soft silhouettes, their inspirations from romanticism, and their bold socio-political statement garments, Reed’s belief in expression through design transcends gender. As part of Fashion in Motion, tomorrow evening in the V&A’s Raphael Court, three free shows present Reed’s designs and allow them to promote their expressive and proud values in a fashion show accessible to all, providing diverse representation and visibility both on-and-off the catwalk.
Do you remember seeing Harry Styles on the cover of American Vogue in that ruffled white dress? How it was lavishly combined with a crisp suit jacket and an air of ethereal self-confidence? This was one of Harris Reed’s notable moments – one of their designs on the bodies of a celebrity, their first client, Harry Styles, pushing the boat out into a future where men don’t disregard the feminine aspects of style, after years of toxic masculine tendencies. In a world where women aren’t mocked for wearing men’s silhouettes, but a man can be targeted for wearing a dress, Reed has always focused on this deep-rooted sexism in our society that stands as a roadblock in front of authentic expression, alongside other stereotypes for every gender.

From their days as a student of Central Saint Martin’s in London to winning GQ’s Breakthrough Designer award in 2021 – after the successes of their graduate collection Thriving in Our Outrage and their debut into the fashion-world For Now, Unexplained, which was unveiled at the first British gender-fluid fashion week – Reed has always been a mouthpiece for extravagance, fearless expression, and fluid identity, and their new collection is no different, blending traditional ideas of masculine and feminine into an evolving spectrum for every type of human body.

Fashion in Motion has existed at the V&A for over 20 years as the only fashion-series of its kind allowing members of the public to easily attend and enjoy professional fashion, previously showcasing designers such as Alexander McQueen, Vivienne Westwood, Yohji Yamamoto and other worldwide fashion superstars. Featuring Harris Reed in this long-standing tradition speaks volumes of the inclusive conversation sparking within the world of fashion, and the revolutionary move towards the possible eventual integration of mens and womenswear that Reed believes in, for sustainability as well as expression.

Focusing on themes of performance, opulence, and self-expression, Reed’s garments are showstopping – suits merge with ballgowns, giant headpieces circle models like a divine holy light, and the excess of layers, fabric and patterns give the collection an indulgent and regal feeling. Mainly using black and white – in contrast to their previous work, which focused on colours as personal auras – models cannot be separated by gender, and become part of a bigger collective of fluidity, the contrast of these colours adding to the duality itself. Their work continues to take a glance back at the romantic period, combining the soft and the powerful, and modernising this old opulent style. Promoting self-love and acceptance, this runway is a triumph in blurring the lines and tossing away stereotypes, presenting this narrative to the public in whatever way they choose to interpret it.

This runway acts as a precursor for Harris Reed, to the upcoming V&A exhibition Fashioning Masculinities: The Art of Menswear, which opens in the Sainsbury Gallery on March 19 and closes November 6. As the first major exhibition at the V&A to convey the diversity of masculine dress, the collection spans one hundred looks and one hundred artworks, and journeys through the performance of masculinity through time, from classical influences, to clothing beyond the binary. One of the designs from Reed’s first collection features in the exhibition, showcasing their bold restructure of romanticism into modern self-expression, and further representing people as exactly that: people. 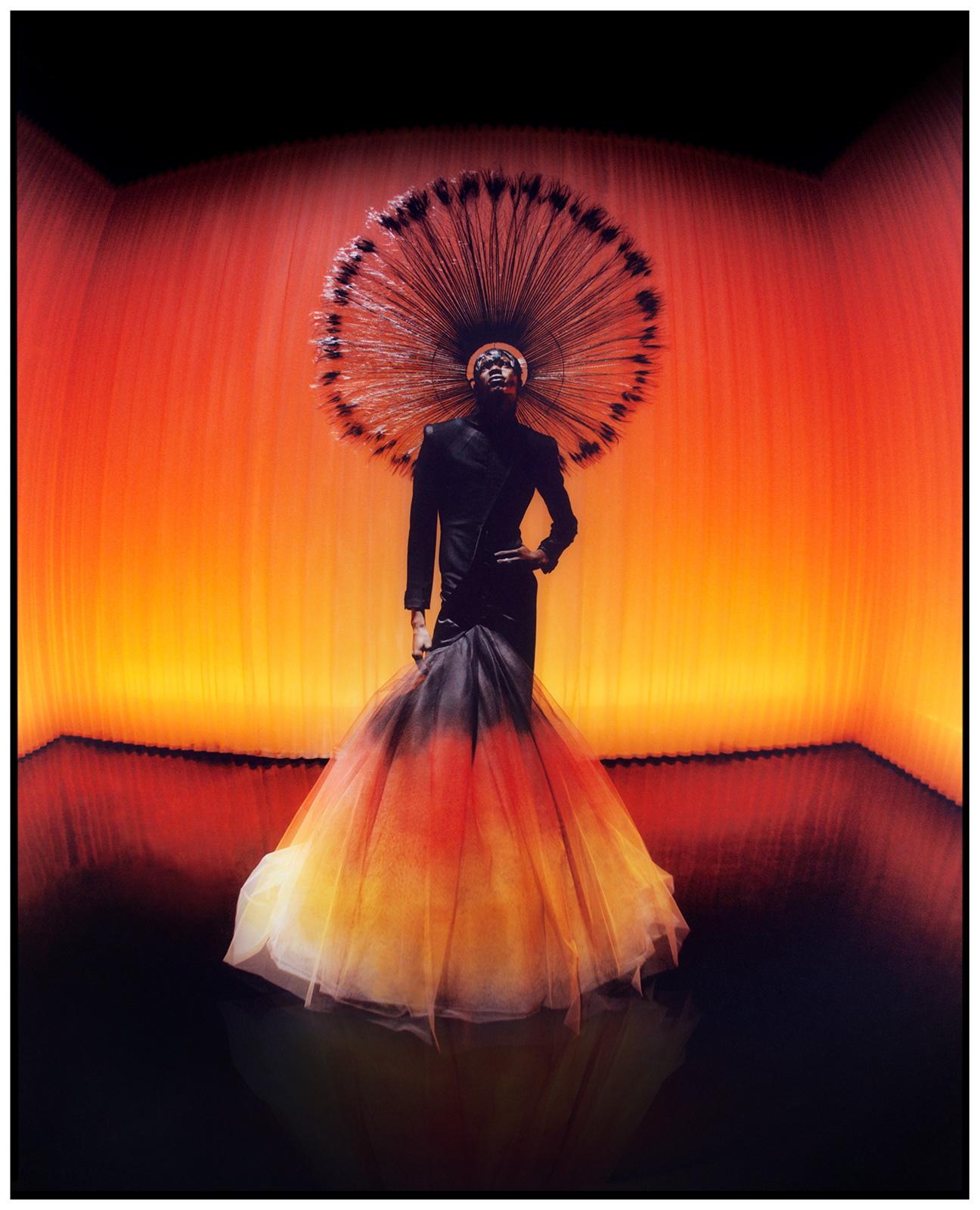 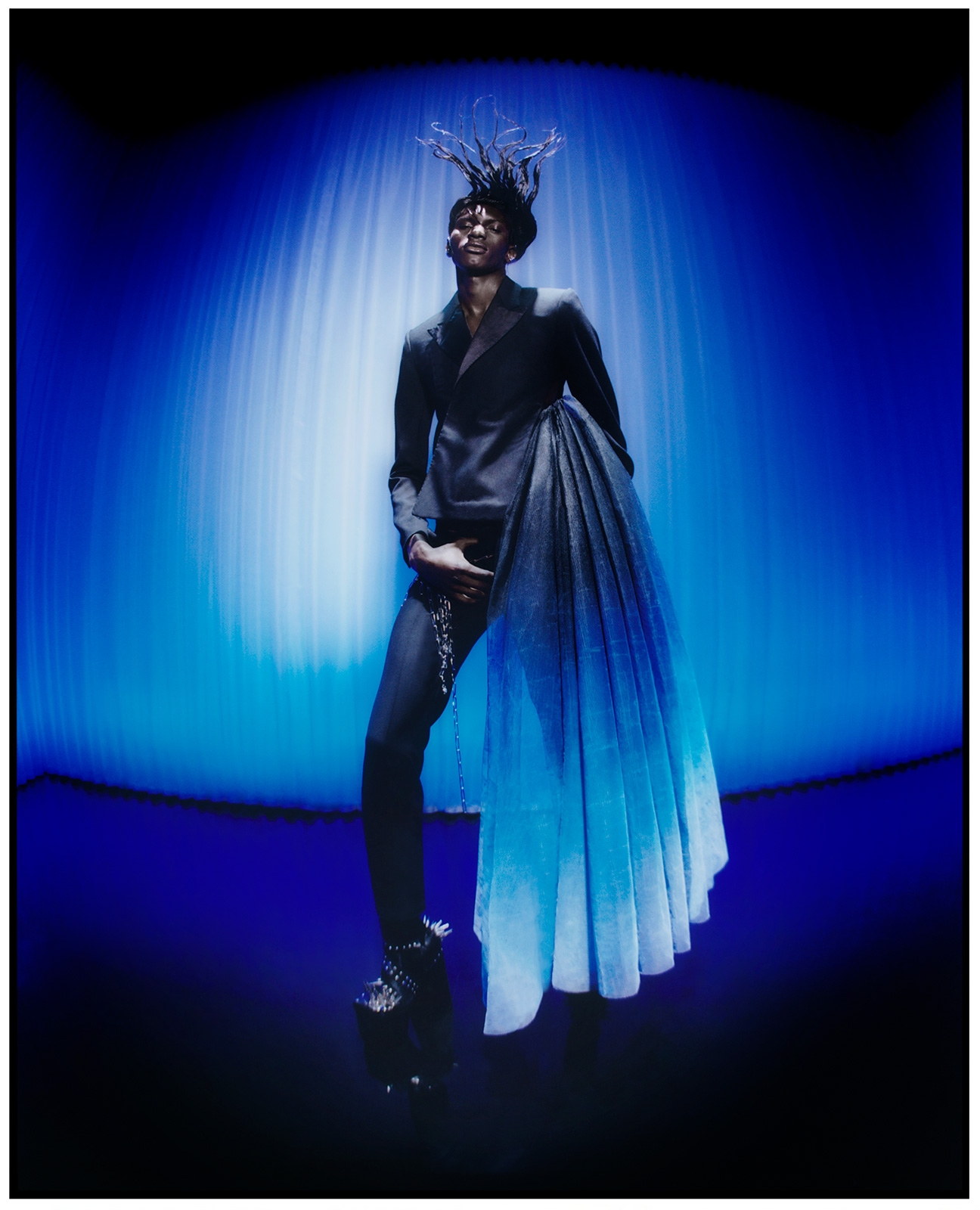 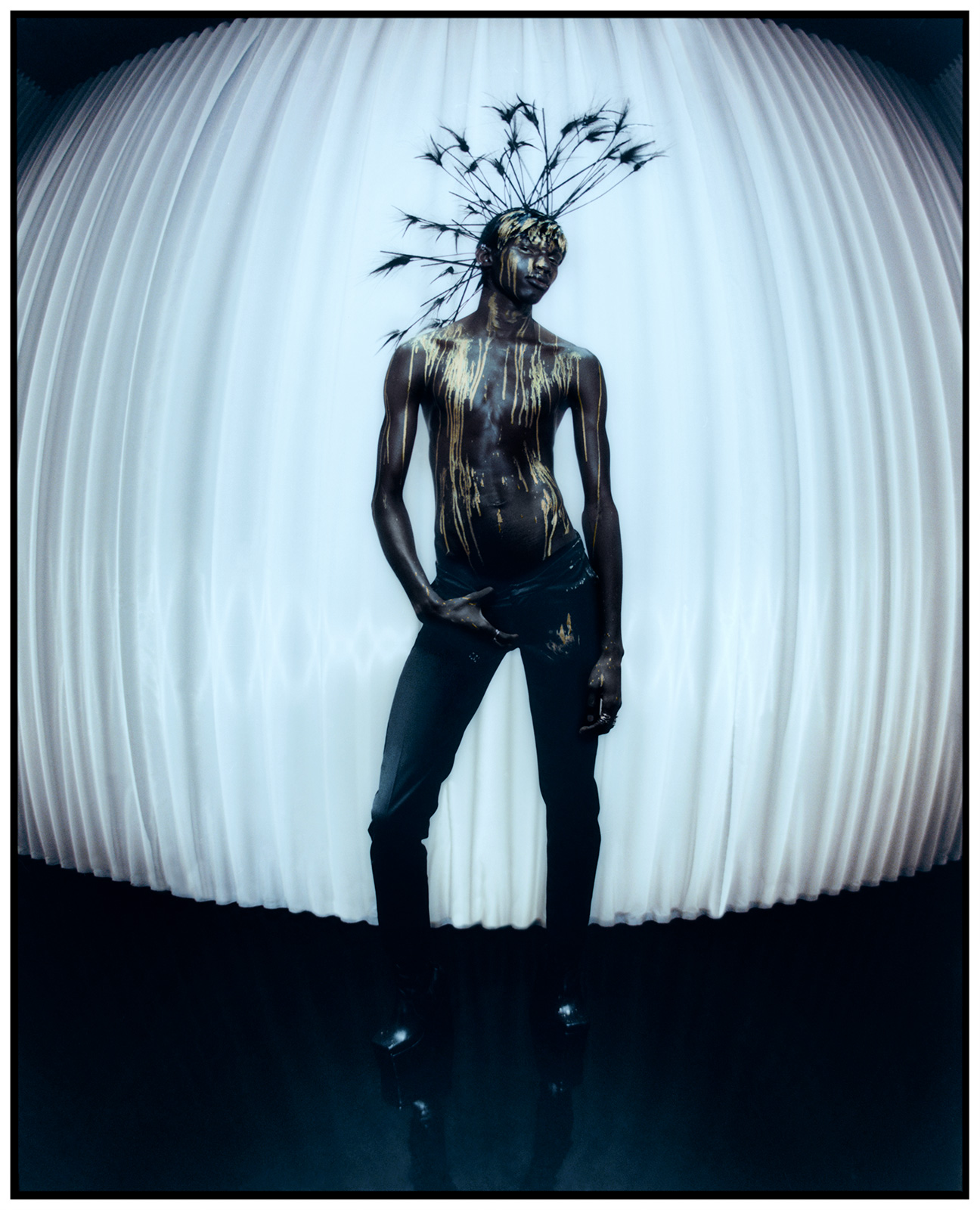 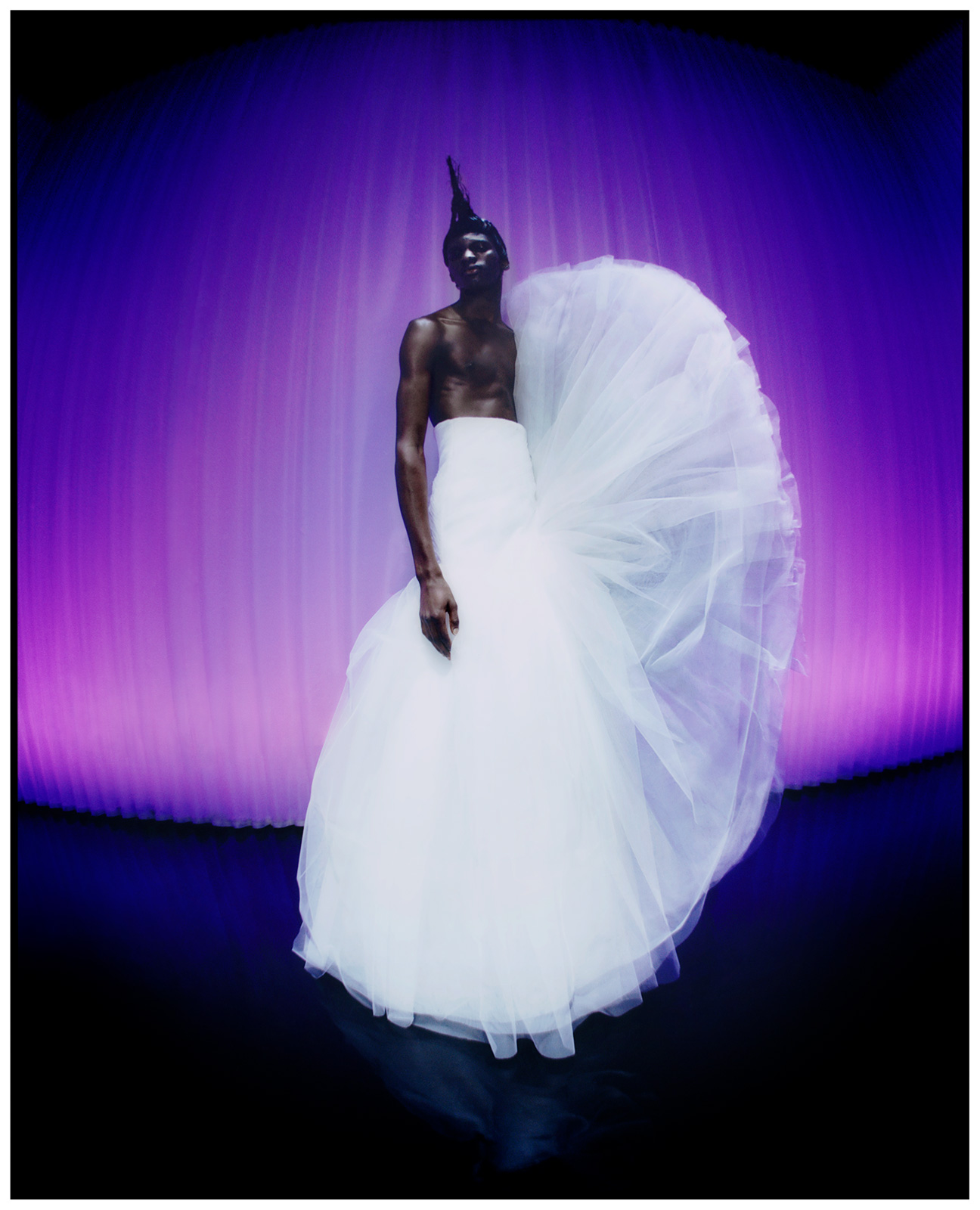