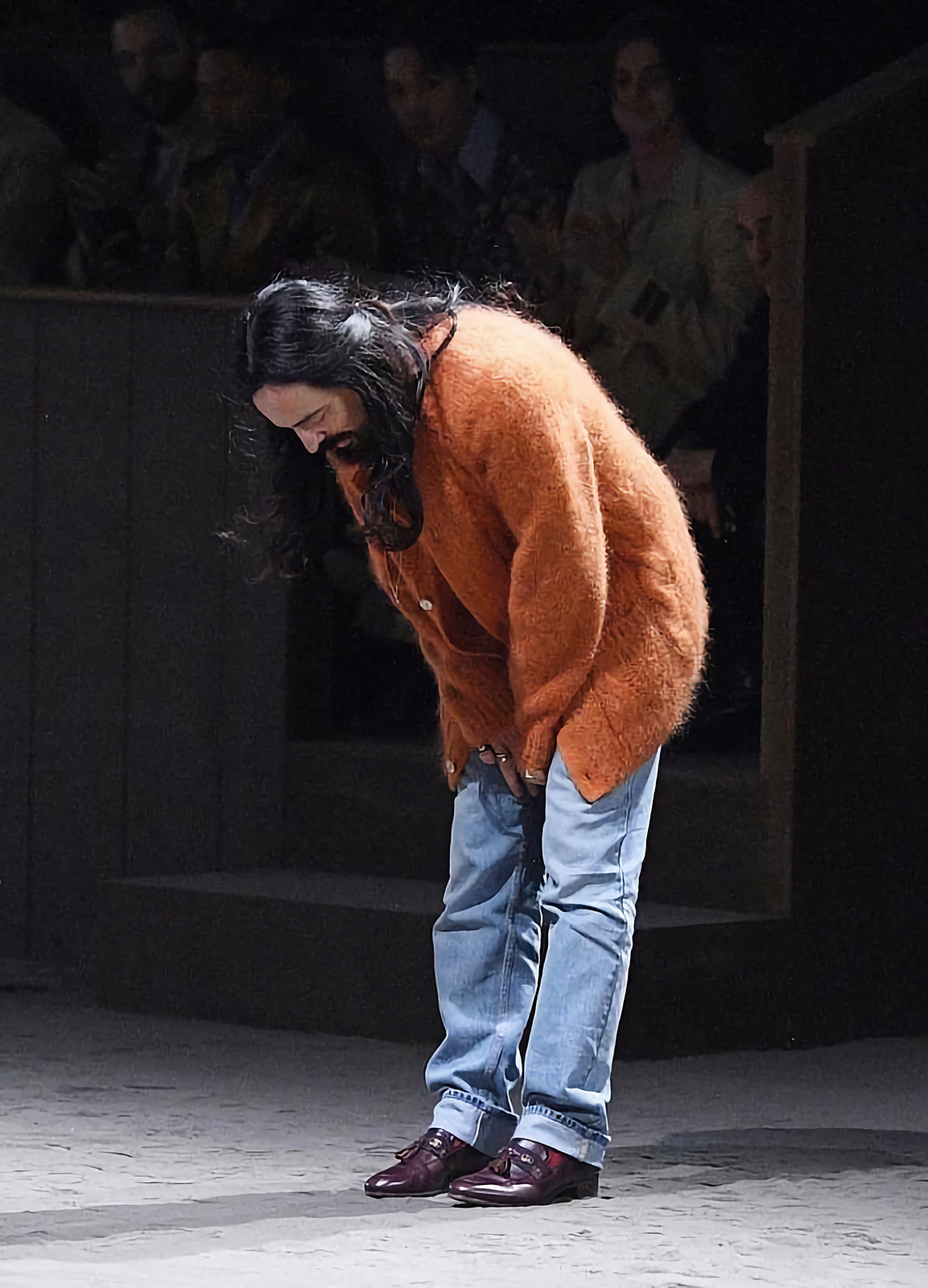 Initially appointed as Gucci’s Creative Director back in 2015, – and after having worked for the brand since 2002 – the Roman designer shifted Gucci’s narrative and opened cultural conversations around gender, sexuality, and race. Credited with reviving the label’s popularity, Alessandro Michele is now saying farewell to the House. Michele was a Tom Ford hire and previously worked under Frida Giannini, he brought a breath of fresh air and radical change to the house with his eclectic yet decadent designs responsible for his loyal and star-studded entourage; we ask ourselves, what will Jared Leto, our favourite Michele doppelgänger wear from now on?
Throughout his journey as Creative Director, Michele’s success did not only mark major changes to Gucci, but also to the industry as a whole. Known for his gender-fluid approach to clothing, Michele managed to blur the lines between menswear and womenswear. For his last Spring/Summer 2023 show Twinsburg, Michele featured sixty-eight real-life twins who walked down the runway wearing his signature fluid clothing. Michele also gave his fans some of the most unexpected, anticipated and celebrated partnerships in fashion such as the Hacker Project with Balenciaga, the Ha Ha Ha collection with Harry Styles, or his homage to Stanley Kubrick for The Exquisite Gucci campaign.
Crowned as the “world’s hottest brand” according to the Lynx index, Michele has recently tried to broaden Gucci’s reach by opening Guccci Osterias worldwide or taking his designs into Web3 and the metaverse. In spite of the former advancements, sources have said that Michele was asked to “initiate a strong design shift,” in order to rejuvenate and revitalise Gucci, and it seems like the Creative Director was not on board and unfortunately felt unable to meet the standards of such onerous petition.
Holding a bulk of Kering’s profits earning almost ten billion euros in revenue in 2021, other sources believe that François-Henri Pinault, the chairman and CEO of the Kering Group wants a “change of pace” due to a decline of sales and popularity of the house in Asia, more specifically a decline of Chinese costumers who seemed bored of the repetitive designs. Pinault believes that a change of direction is the quickest way to bring novelty and innovation to the house. In an official statement released by the house Pinault praised the designer’s journey throughout the house. In an official press release, sent out on late Wednesday evening by the Kering group Pinault said farewell to the creative director and wished him well in his next journey: “The road that Gucci and Alessandro walked together over the past years is unique and will remain as an outstanding moment in the history of the House. I am grateful to Alessandro for bringing so much of himself in this adventure. His passion, his imagination, his ingenuity and his culture put Gucci center stage, where its place is. I wish him a great next chapter in his creative journey.”
Kering has experienced a wave of creative leadership moves, and this isn't the first time Pinault has surprised us with major unexpected shifts, just about a year ago, the conglomerate chose to replace Bottega Venetta’s creative director Daniel Lee with Matthieu Blazy despite his major transformation and outstanding performance at the brand. Rumours on Michele’s departure flooded the internet around Tuesday evening skyrocketing Kering’s shares the following morning, nontheless such rumours and speculation did certainly not shock us. Talks about Michele’s departure started earlier this month, when the Roman designer never made it to Seoul for Gucci’s repeat Cosmogonie show originally scheduled for November 1. Unfortunately, the show was canceled last minute due to the tragic incident that took place in the Itaewon district days before.
Michele’s next steps remain unknown, as 7 years of partnership come to an end, we cant wait to see where his next journey will take us, but for now, it is time for the creative director to part ways from his beloved house of Gucci. “There are times when paths part ways because of the different perspectives each one of us may have. Today, an extraordinary journey ends for me, lasting more than twenty years, within a company to which I have tirelessly dedicated all my love and creative passion. During this long period Gucci has been my home, my adopted family. To this extended family, to all the individuals who have looked after and supported it, I send my most sincere thanks, my biggest and most heartfelt embrace. Together with them I have wished, dreamed, imagined. Without them, none of what I have built would have been possible. To them goes my most sincerest wish: may you continue to cultivate your dreams, the subtle and intangible matter that makes life worth living. May you continue to nourish yourselves with poetic and inclusive imagery, remaining faithful to your values. May you always live by your passions, propelled by the wind of freedom.”
The Gucci design team will continue to produce collections until a successor is announced.