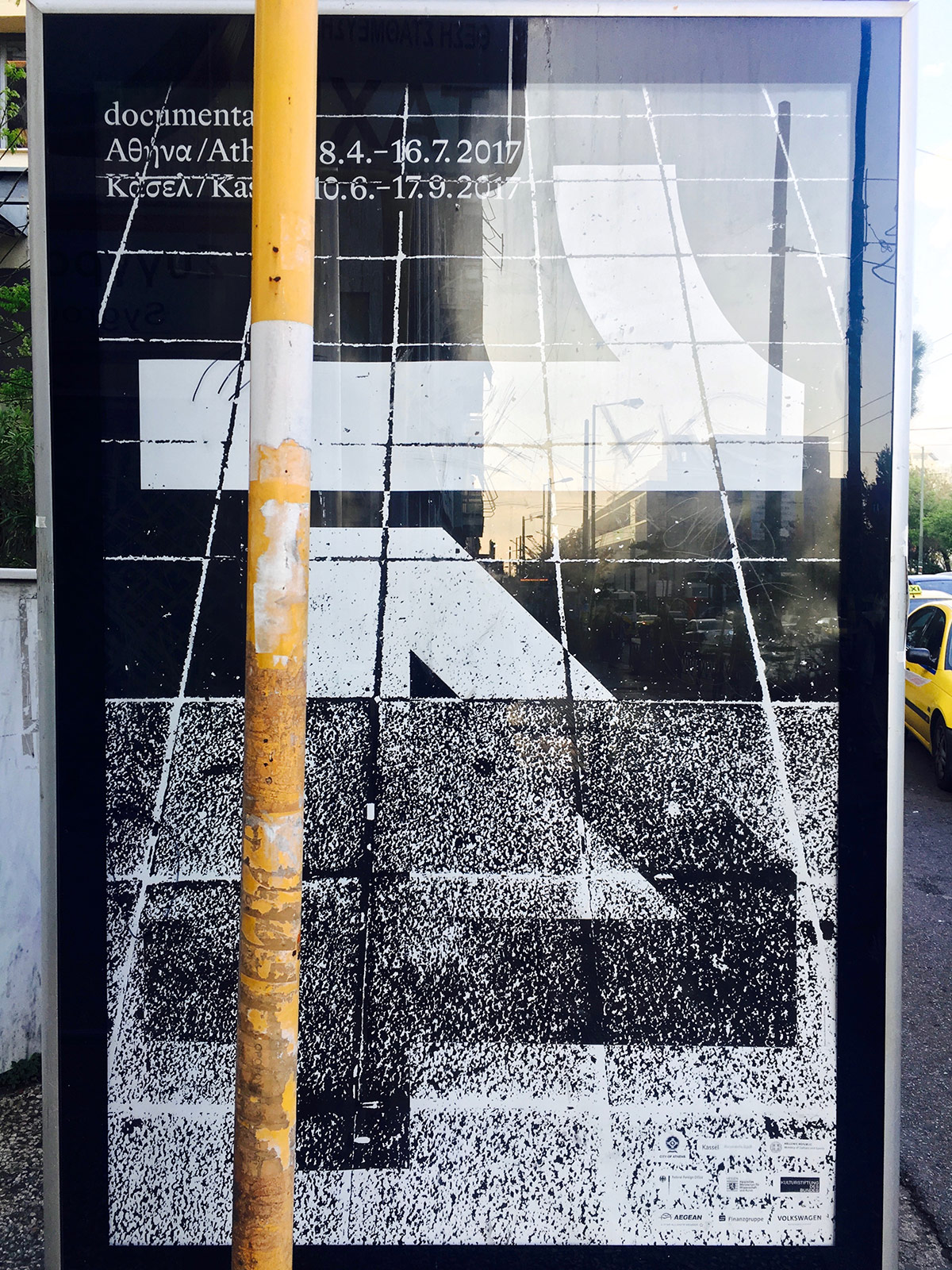 The 100-day exhibition, documenta 14, entitled Learning from Athens, opened its doors in the Greek capital last month and will be displaying works from over one hundred and sixty international artists – most of them unknown – in forty-seven public institutions, squares, cinemas, university locations, and libraries. Learning from Athens will be closing its doors on July 16th, having lasted a hundred days, its standard duration since its foundation in 1955.
Documenta takes place once every five years, usually in Kassel, a city in the centre of Germany that was destroyed during World War II. In 2017, on its fourteenth iteration, it’s taking place also in Athens, transplanting half of the quinquennial exhibition to the Greek capital. The larger spaces – the Athens School of Fine Arts (ASFA), the Benaki Museum Pireos Street, the former Athens Conservatoire, and the EMST Contemporary Art Museum – are holding the presentation; and then, other forty-three satellite venues feature just one or two artists.

This fourteenth edition is dominated by performances, actions, and smaller interventions – rather than visual offerings – that engage the visitor with the fabric of the city. The program, under the artistic direction of Adam Szymczyk, also includes a radio station that broadcasts twenty-eight commissioned sound art pieces, art films screened on Greek television, and an educational program.

The Athens leg of documenta 14 is inspired by the socio-political themes that shape Europe today: political structures (many of which were born in Greece), libidinal economy, rethinking production, currencies, and population flows – immigration and displacement aka refugees crisis – as well as WWII and the Holocaust, historical backdrops that informed documenta’s creation in the first place.

Documenta 14 is an “apatride exhibition” — quoting the Spanish philosopher and curator, director of the Public Program, Paul B. Preciado —, by means of that the show does not have birth or death dates, or a country of origin included in the charming labels. There is also a lack of contextualizing information and wall texts; so the show will be experienced from a fresh point of view and perspective.

After this small intro, we embark upon the documenta 14’s massive tour through the main venues, some of the public spaces and some small ones we visited.

The Parliament of Bodies at Parko Eleftherias

Starting with the Athens Municipality Arts Center at Parko Eleftherias (which means ‘Freedom park’), the site of The Parliament of Bodies, directed by the already mentioned Paul B. Preciado, the park transforms itself into an experimental public space, introducing numerous Greek and international artists, theorists, historians, and curators with weekly activities including public talks, performances, reading groups, workshops, screenings, and presentations.
Andreas Angelidakis created mobile soft architectural blocks of resembling ruins for the occasion. These sixty-eight blocks can be assembled and rearranged in endless ways, creating multiple and transient architectures ideal for the different functions of the parliament. 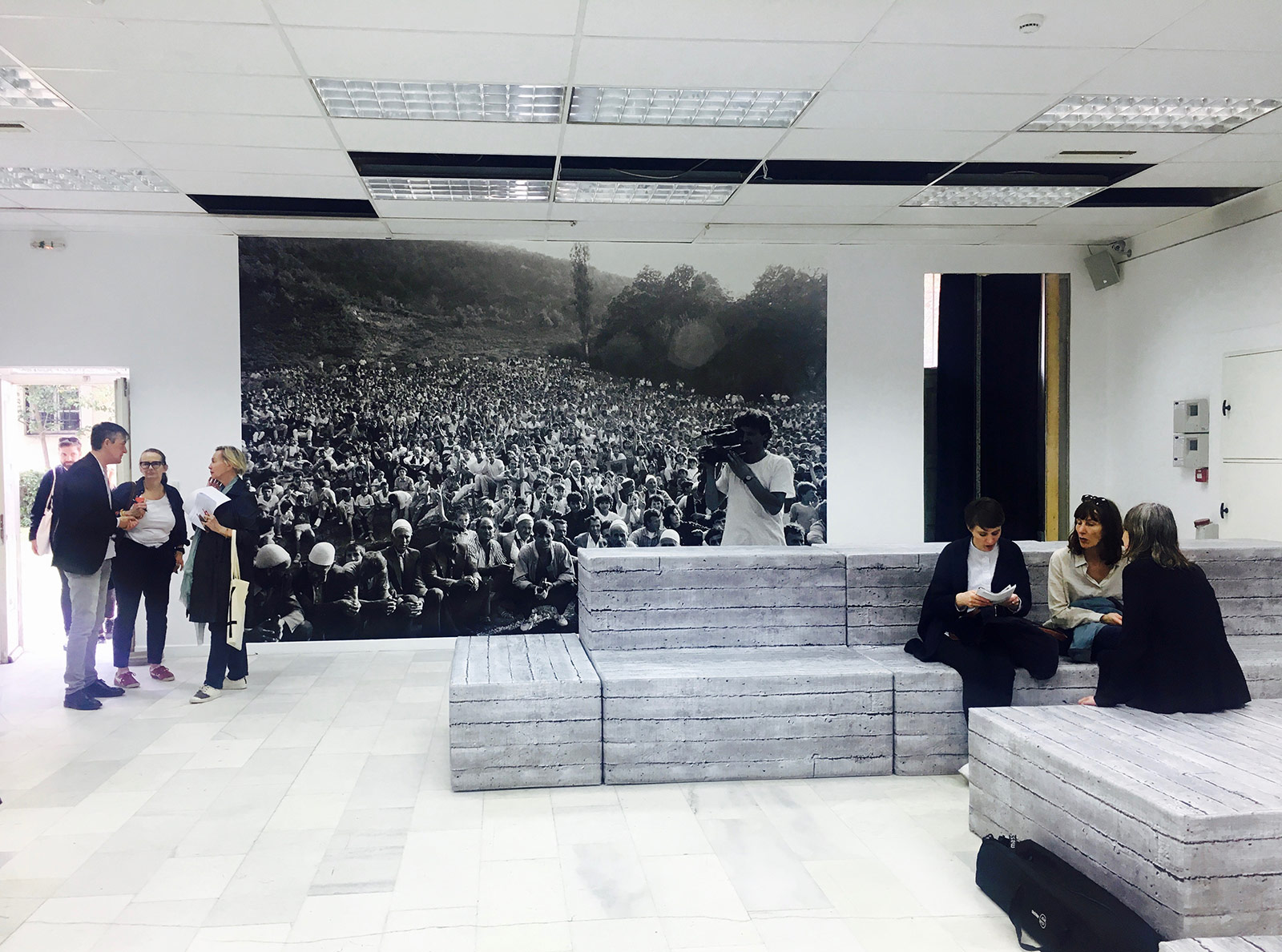 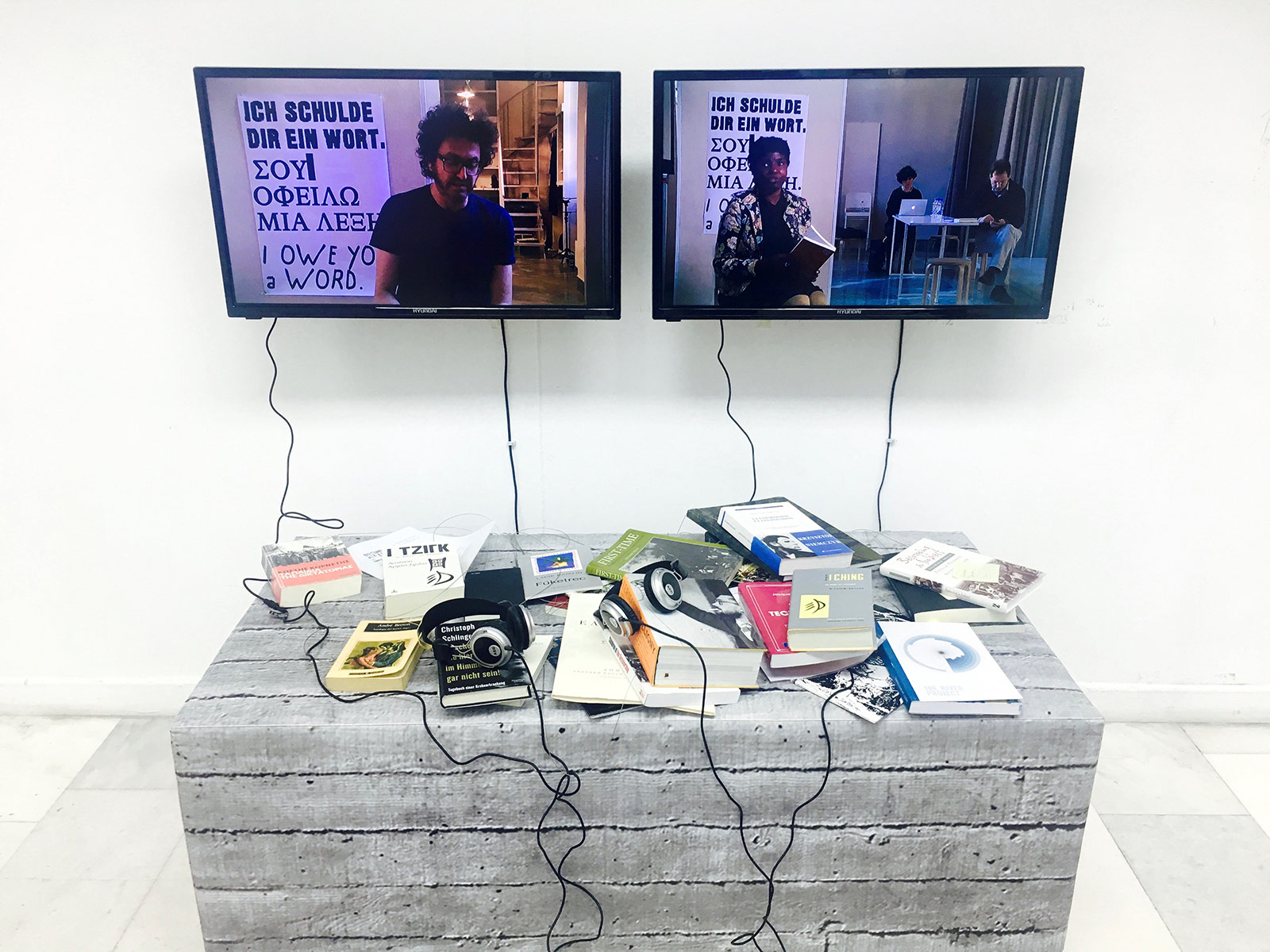 The biggest venue — and probably the least interesting — is the EMST, defined by the curators’ team as the 'chorus', a multitude of voices and bodies drawn together to listen and to dialogue, featuring more than eighty artists. The artworks there cover topics as disperse and diverse as colonialism on the ground floor; feminism, war and sound art on the first floor; and nationalism, Holocaust and dissident bodies (plus abstract paintings) on the second and third floors. Nevertheless, I must do a special mention both to Daniel G. Andújar’s installation and the almost hidden piece by Moyra Davey for their quality. 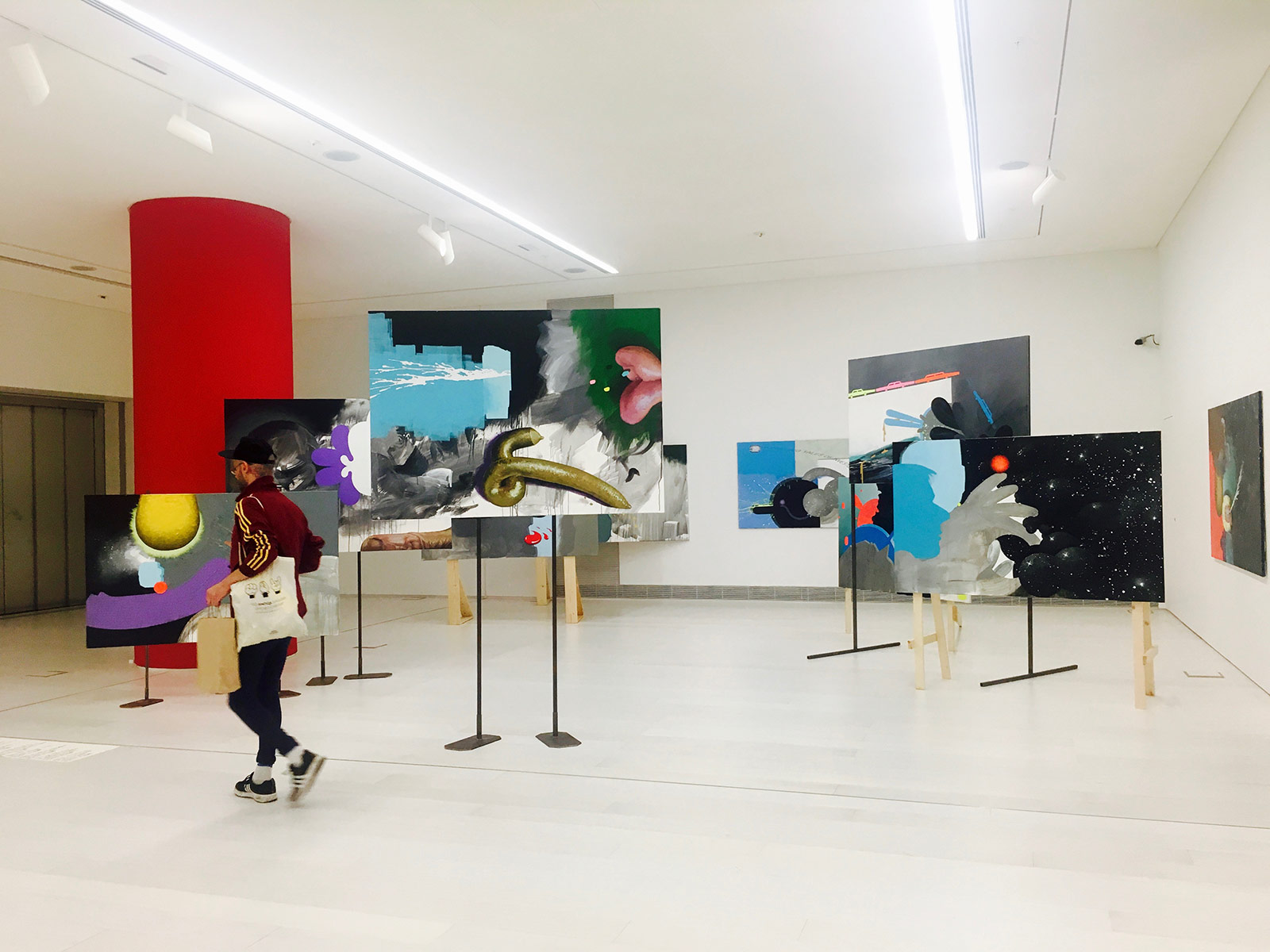 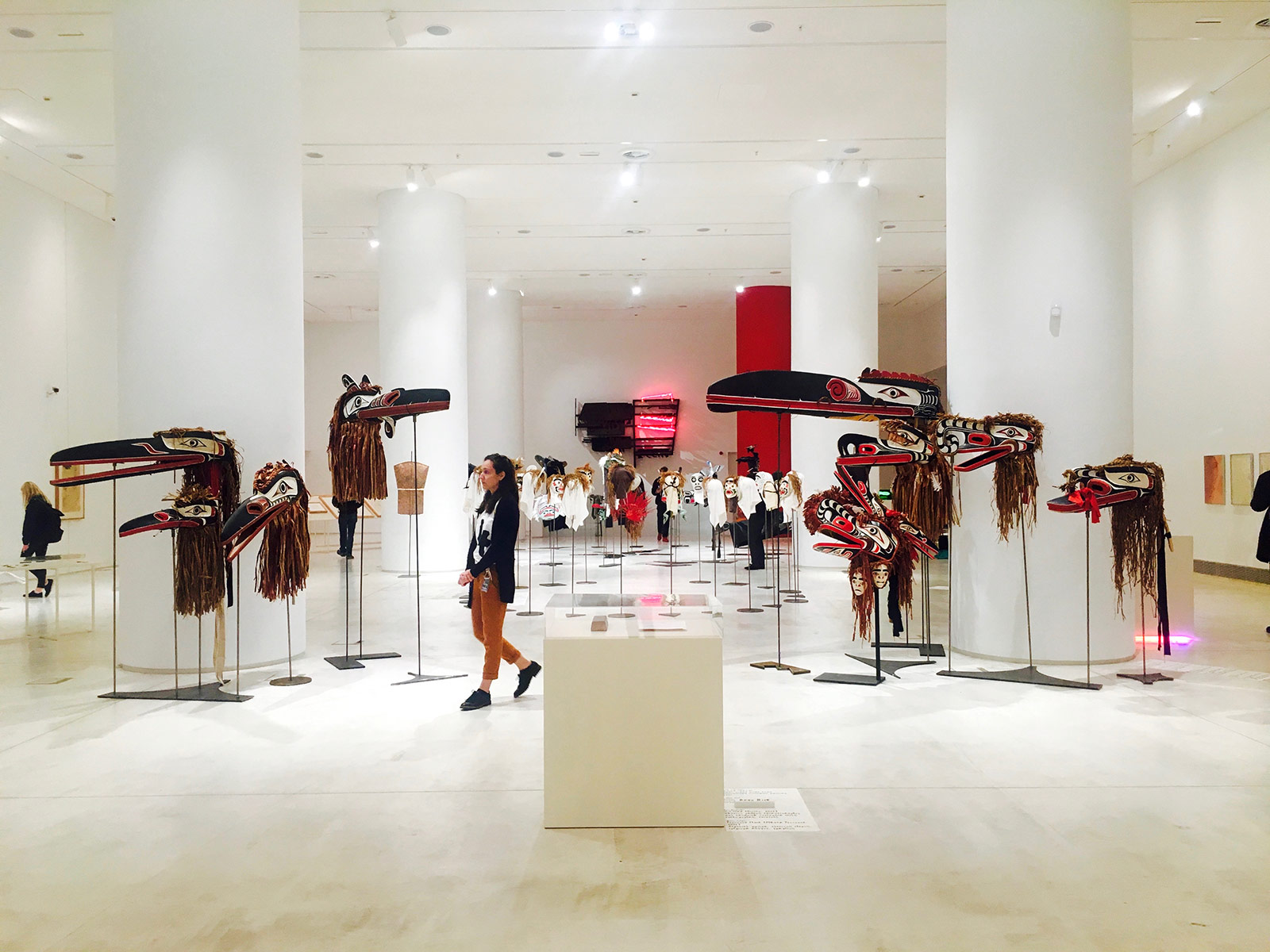 The next main venue (and one of my favourites) is the Athens School of Fine Arts. The Nikos Kessanlis Exhibition Hall provides a perfect setting to explore notions related to experimental education and pedagogy, social organization, and different ways of “unlearning” – quoting artistic director Adam Szymczyk’s opening speech, ‘Unlearning is a form of learning’.
At ASFA the curatorial thread starts with works related to utopianism, education, pedagogy, and social organization to turn the radical utopia into dystopia. This dystopia is created through pieces and works that present the failure of nowadays’ social models: the failure of the European Union, the debt and global economic crisis, the refugees’ critical situation, and the global political tension.
There are some documentary videos presenting the effects of the European refugee crisis there, but none of them do it as The Tempest Society does; the video, created by Moroccan filmmaker Bouchra Khalili, succeeds in offering information about the different kinds of refugees, and in adding a new perspective that helps people understand the term better. Another documentary worth watching is Glimpse, by Polish artist Artur Żmijewski, which displays images of the lifestyle at the refugee camps and in the living quarters of Berlin’s Tempelhof airport, Calais and Paris. There are also other visual narratives and installations that capture a mood of global political tension. 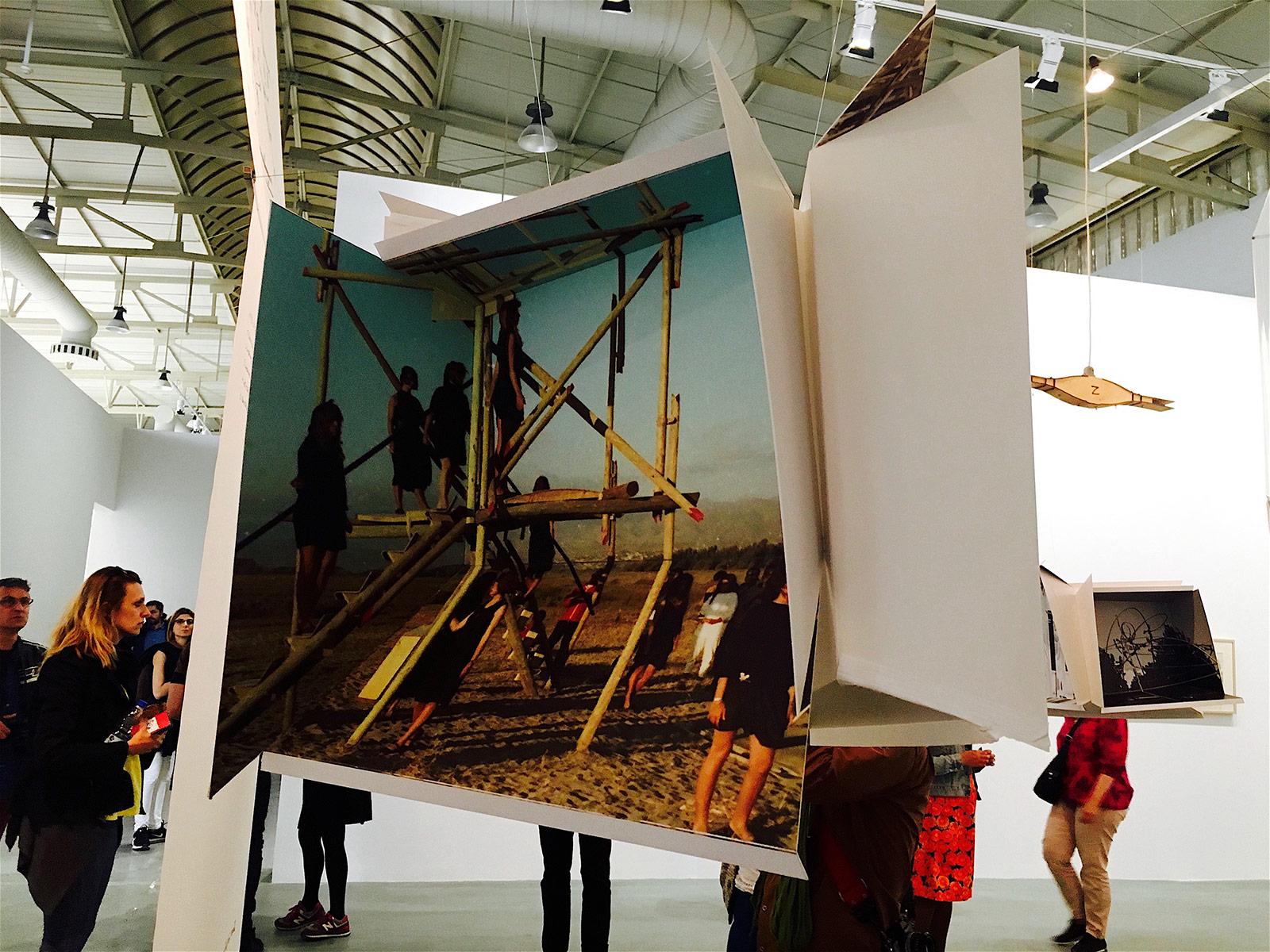 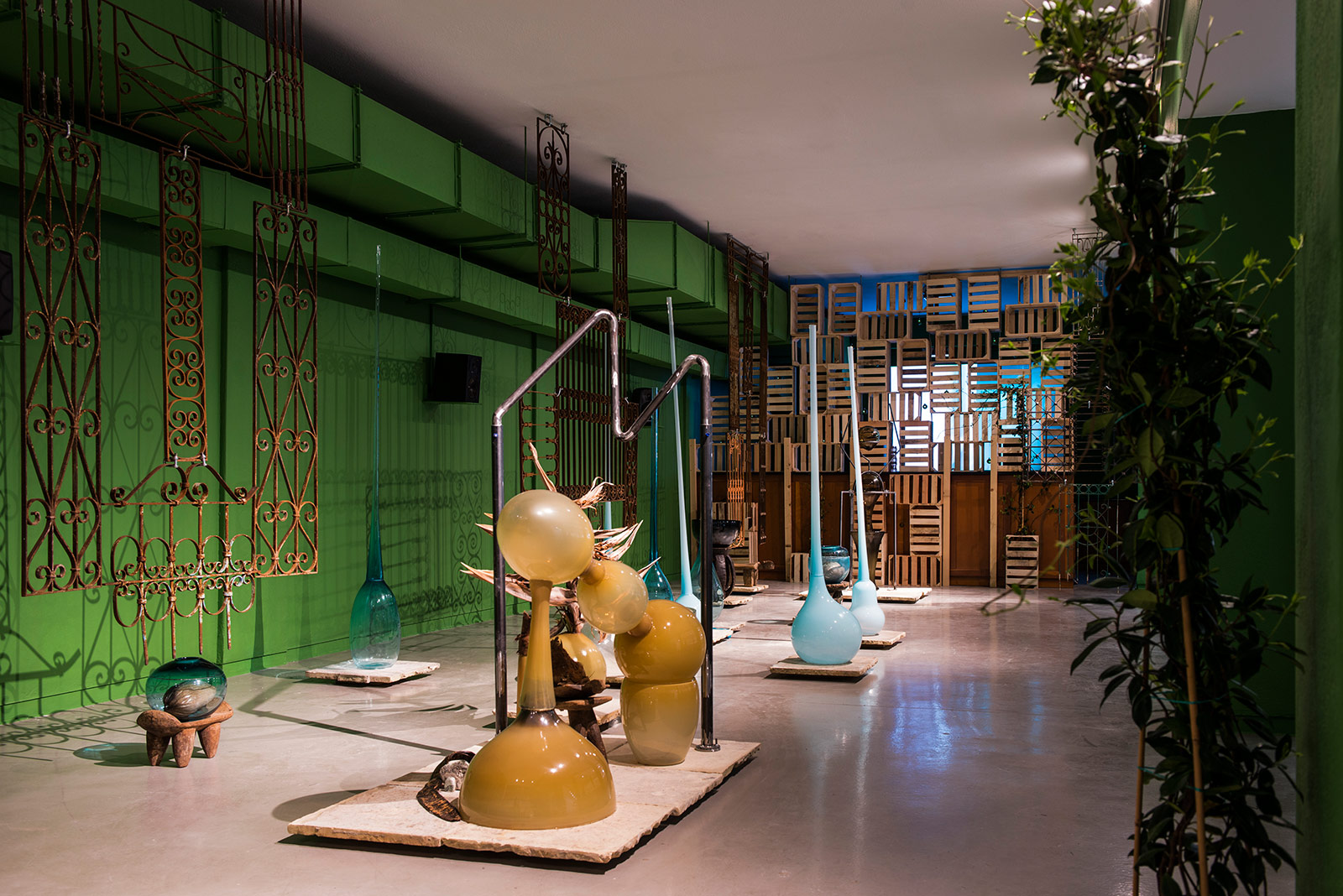 Another great venue, the Odeion Athinon, is focused on sound art and holds a marvellous visual exhibition on the underground floor. The show presents the relationship between score, voice, sound and performance explored by contemporary artists who are interested in the intersection of movement, rhythm, music and performance, and who use scores and musical instruments deeply engaged with everyday life and social reality. Numerous experimental instruments and diagrammatic works implement practice and theory while displaying a utopian potential for the reorganization of systems, which can be extrapolated to social systems, whilst the main exhibition room shows works related to decolonization, barbarity, violence and power irrationality. We must highlight the instruments of Mexican Guillermo Galindo, the Music Room by Turkish Nevin Aladağ, the installation resembling a school by Senegalese Pelagic Gbaguidi, and the wonderful fabric piece of Colombian Beatriz González. 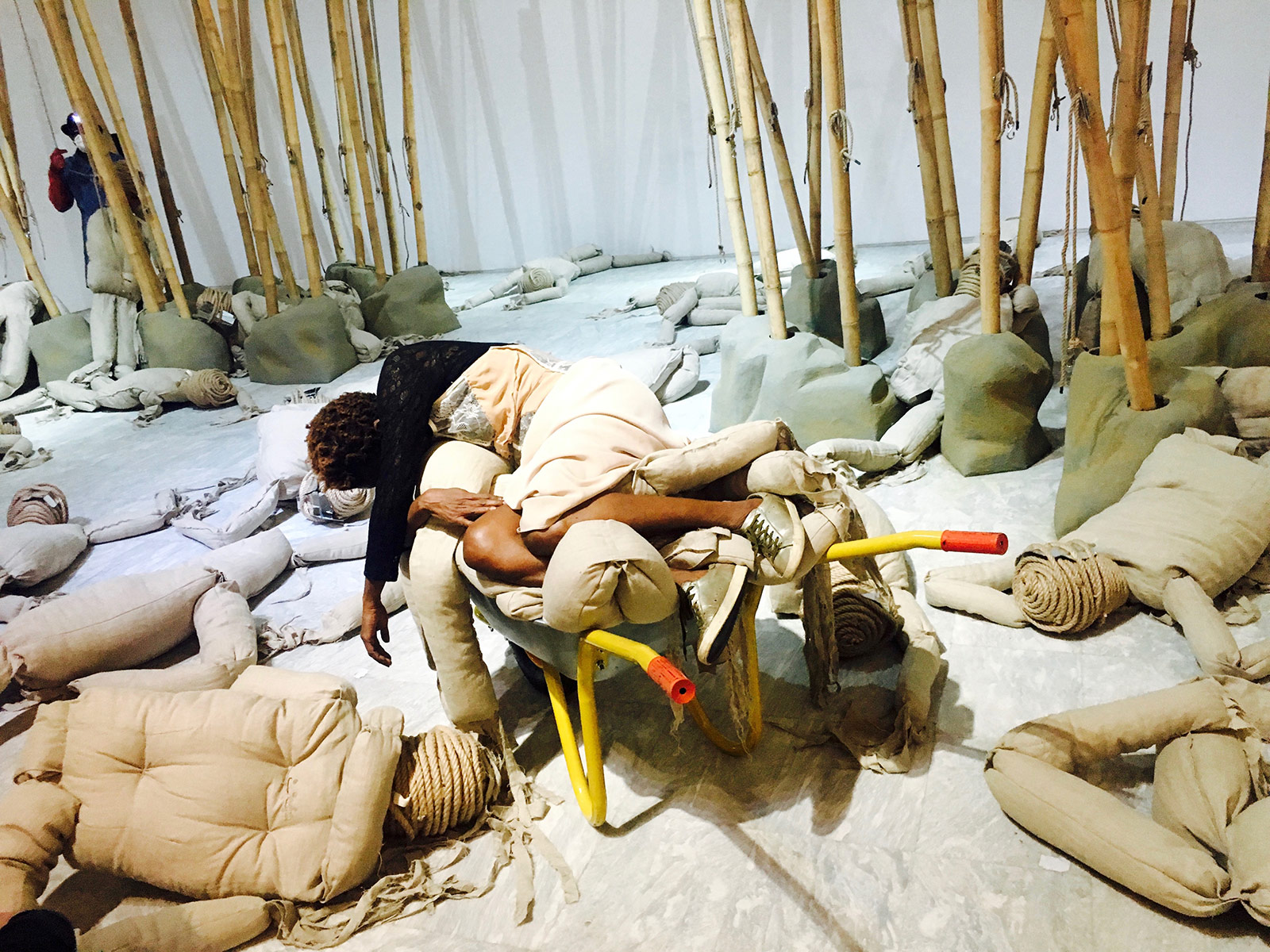 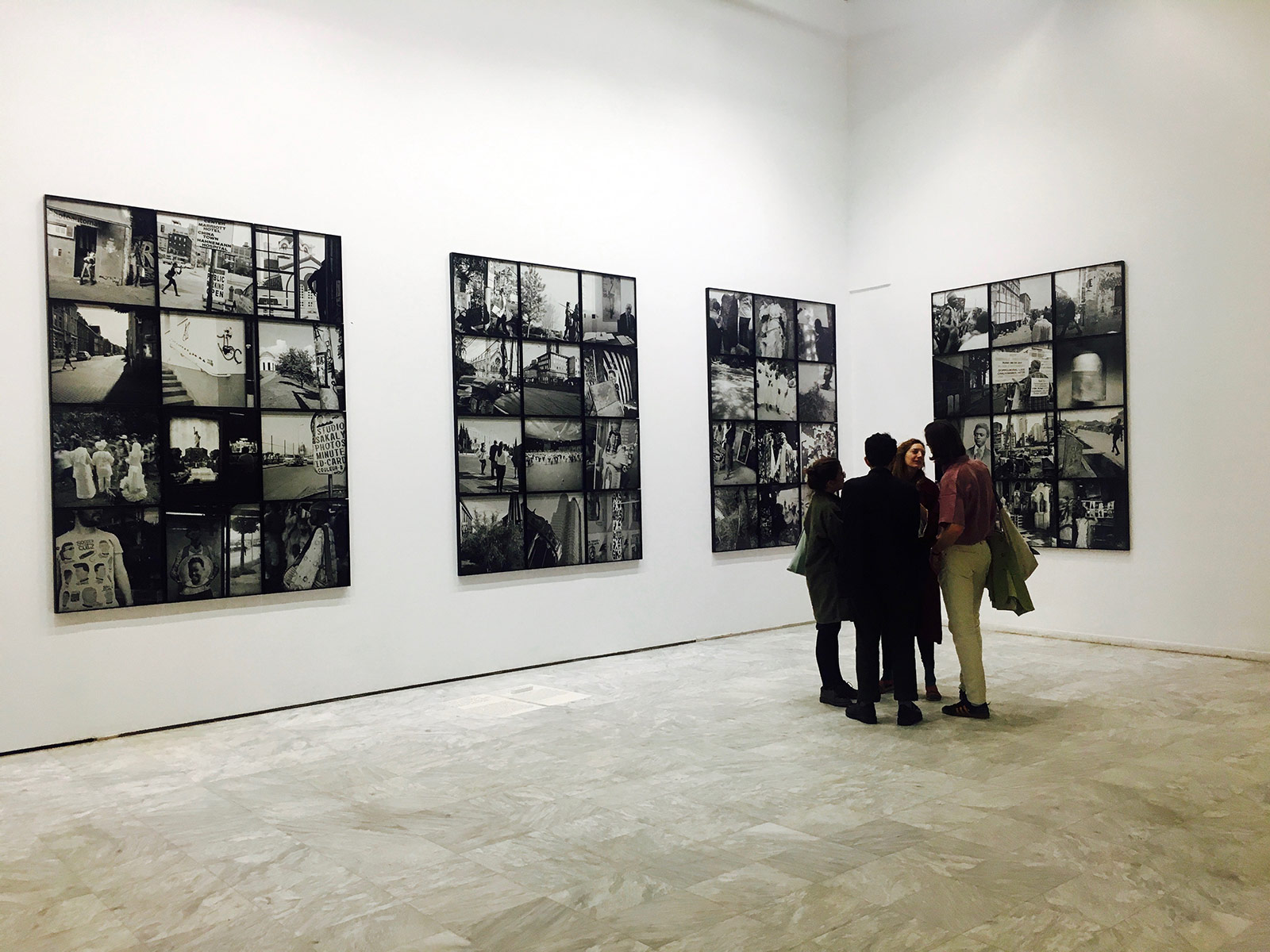 Performances working with the body were shown at Archaeological Museum of Piraeus (Athens port). The Collective Exhibition for a Single Body uses the body as a medium of action; the gestures are performed randomly and continuously repeated by three dancers among the visitors. The performance at Odeion of Agrippa in the Ancient Agora by duo Prinz Gholam also works with the body; they appropriate classic sculpture forms to orchestrate a movement between the statues and their own bodies. 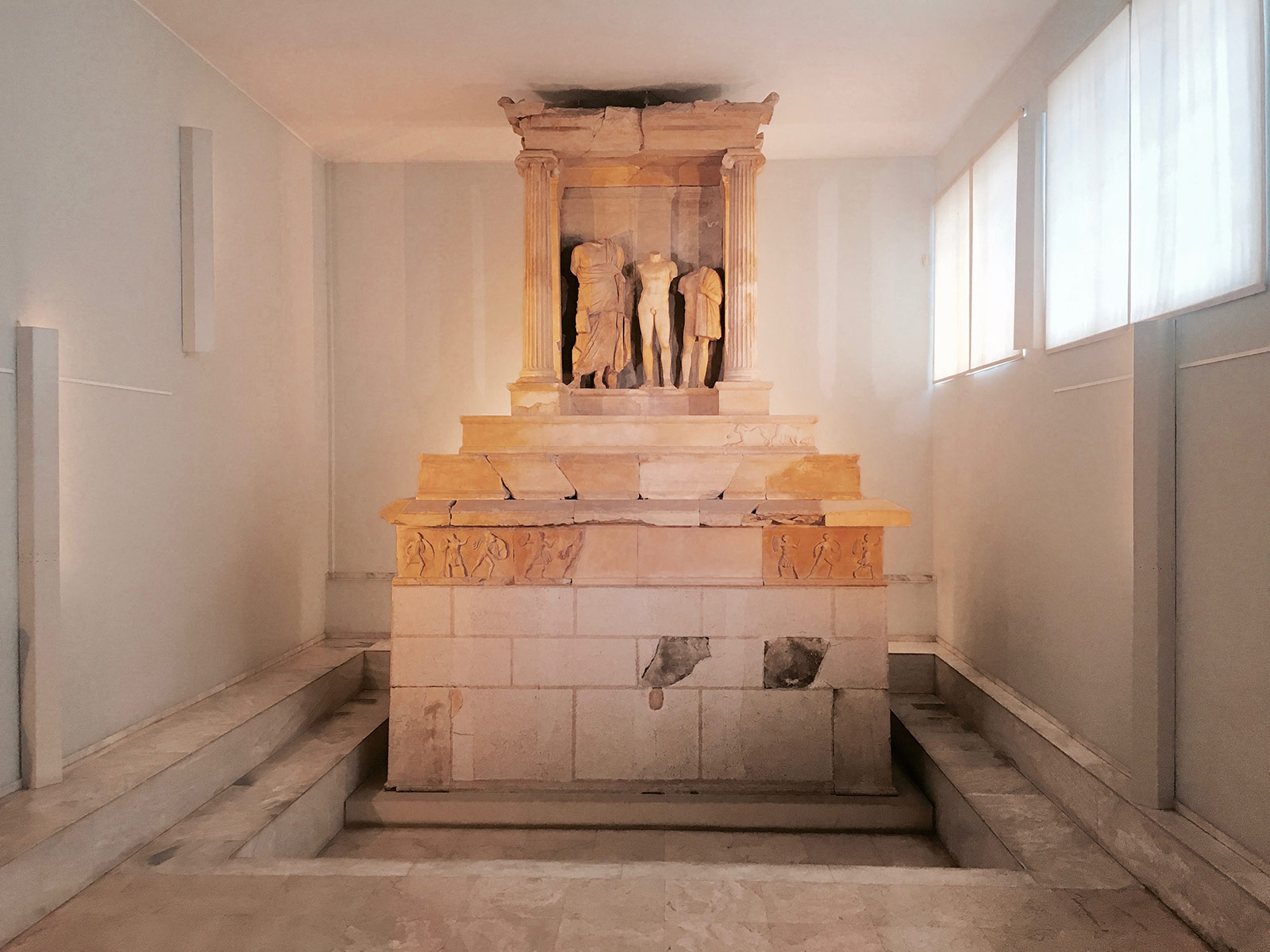 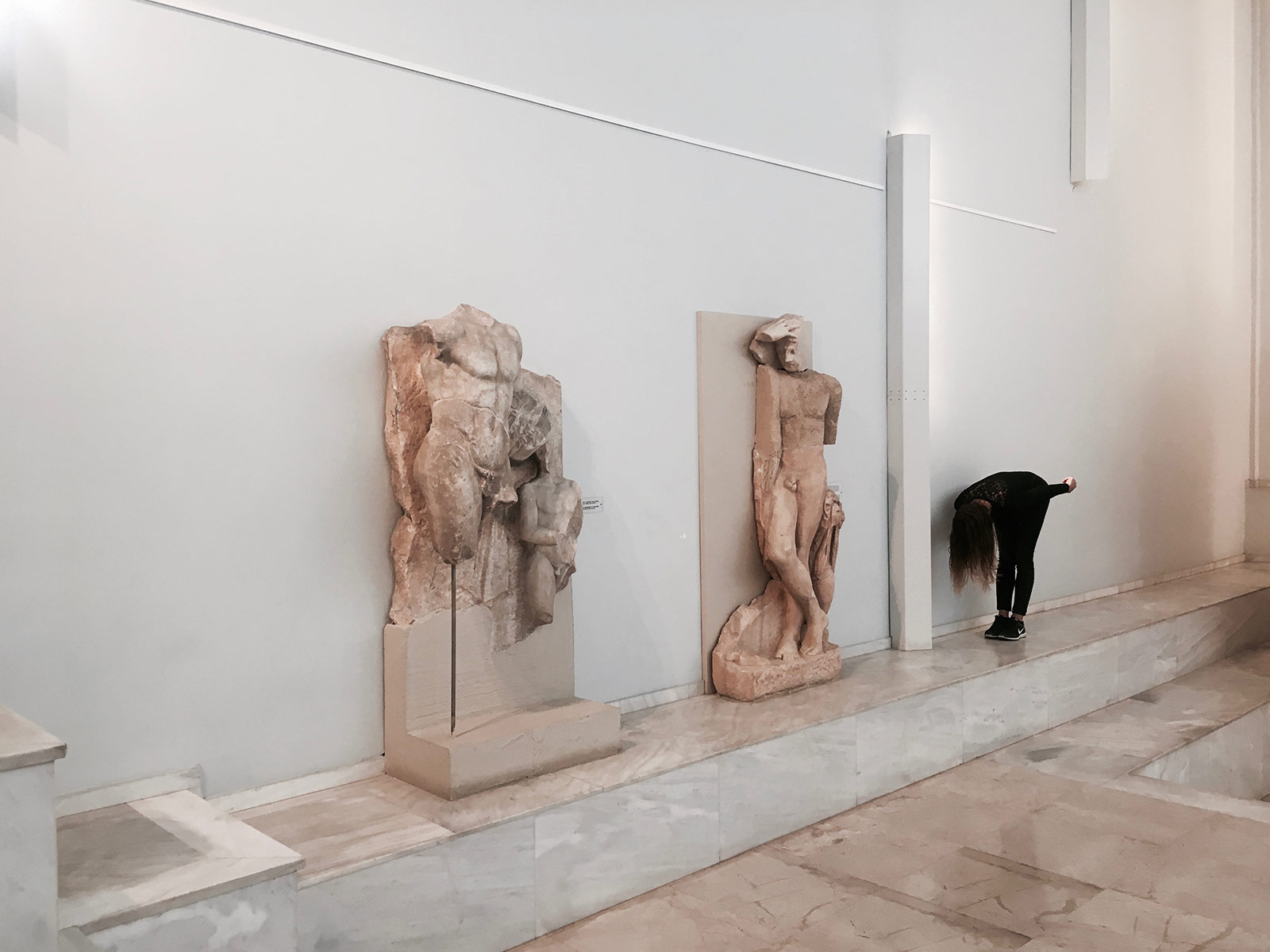 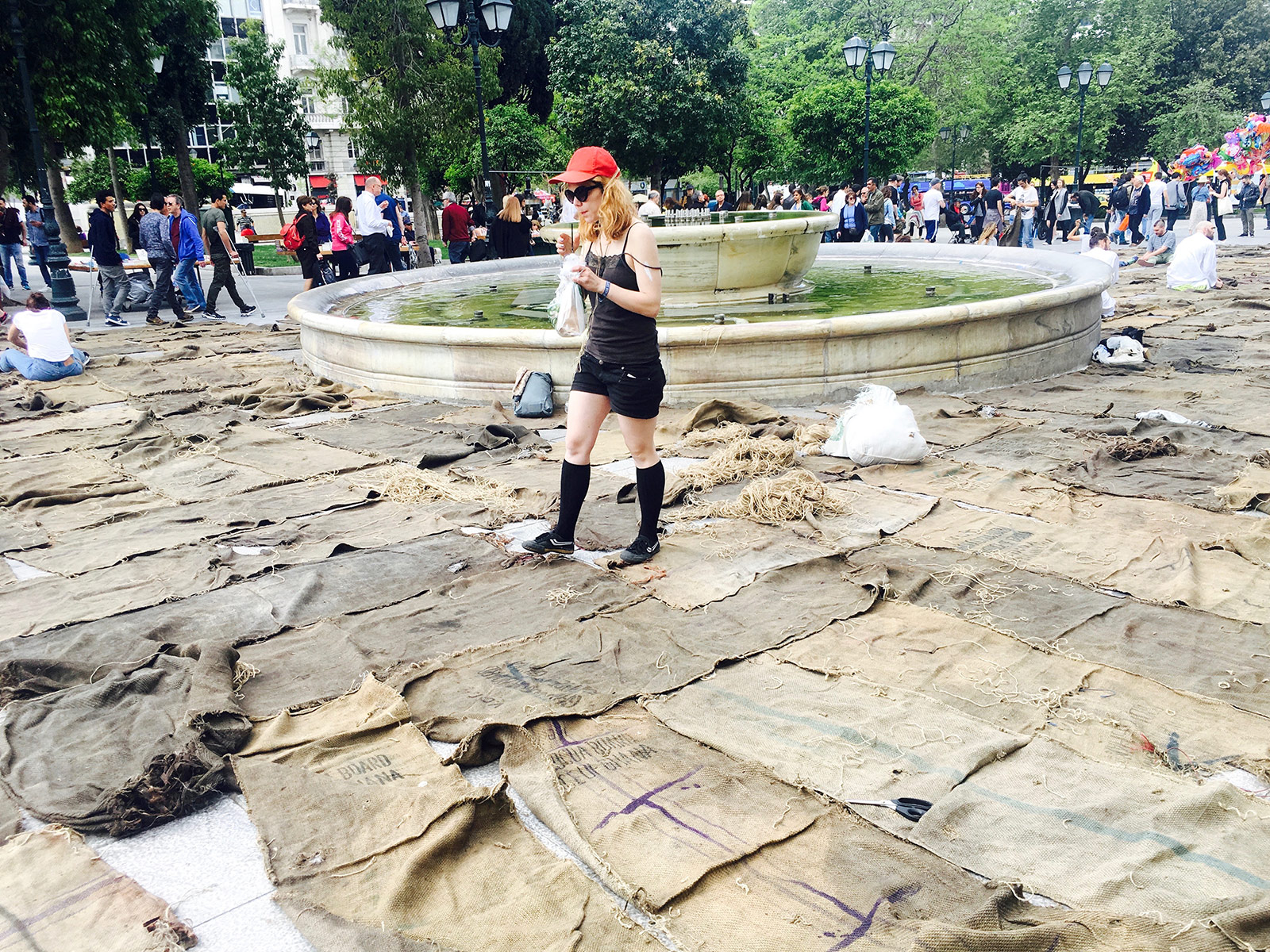 Collaborative art can be experienced at Kotzia Square, where Pakistani artist Rasheed Araeen invites people to share a free meal while reflecting on social change under canopies inspired by Pakistani wedding tents. Also participative is the project on Victoria Square by American artist Rick Lowe; he, together with local agencies, is finding ways to create connections that link arts and culture with small businesses and supporting networks for immigrants and refugee groups. 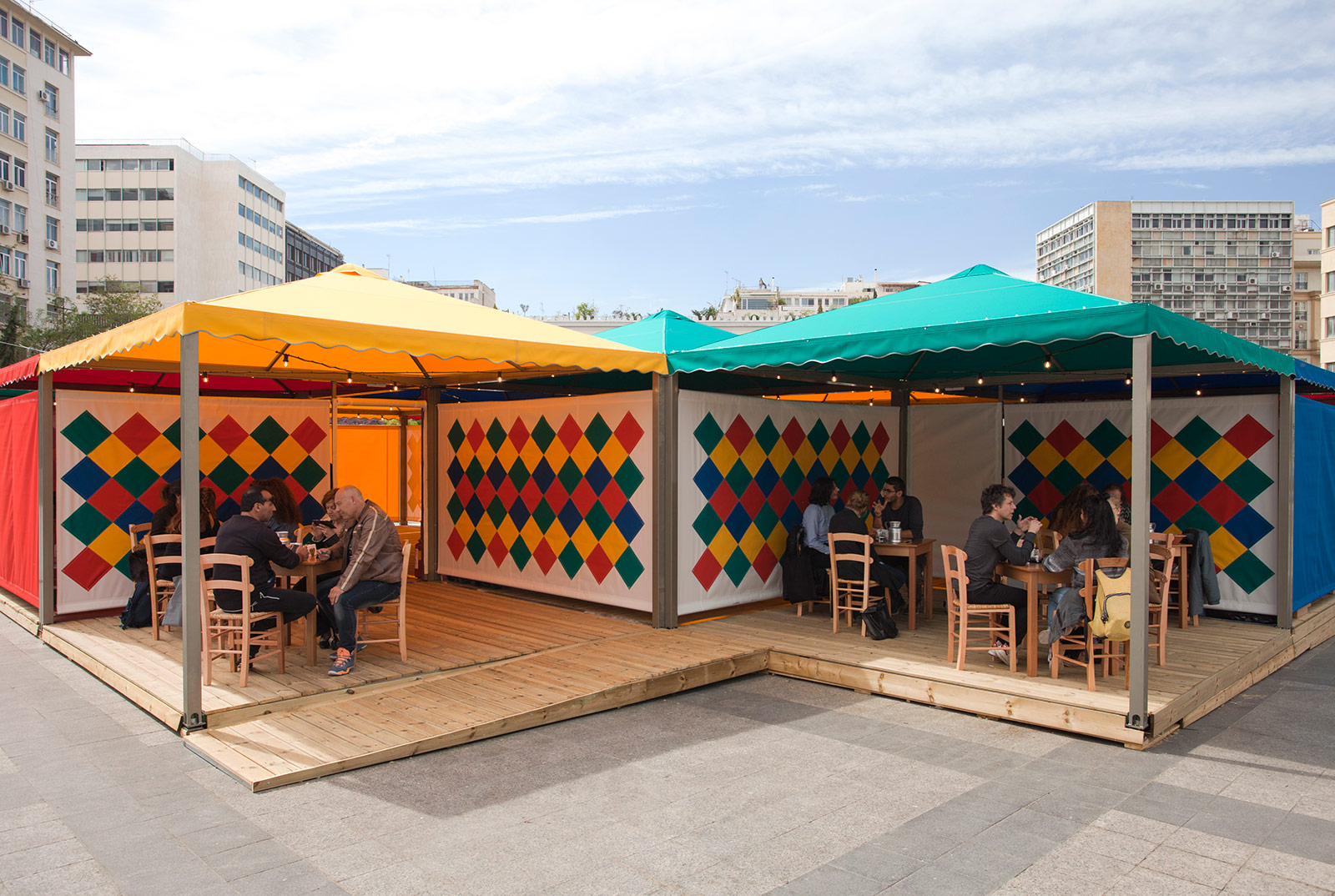 Video projections were screened at Cinema Stella, an open-air cinema inside a courtyard where Douglas Gordon showed his latest film, I Had Nowhere To Go. At Gennadius Library, Scottish artist Ross Birrell shows the video where a violinist plays in the burnt room of the mythical School of Art of Glasgow built by Mackintosh, recently devoured by the flames. Be reborn from the ashes as a metaphor of the current situation. 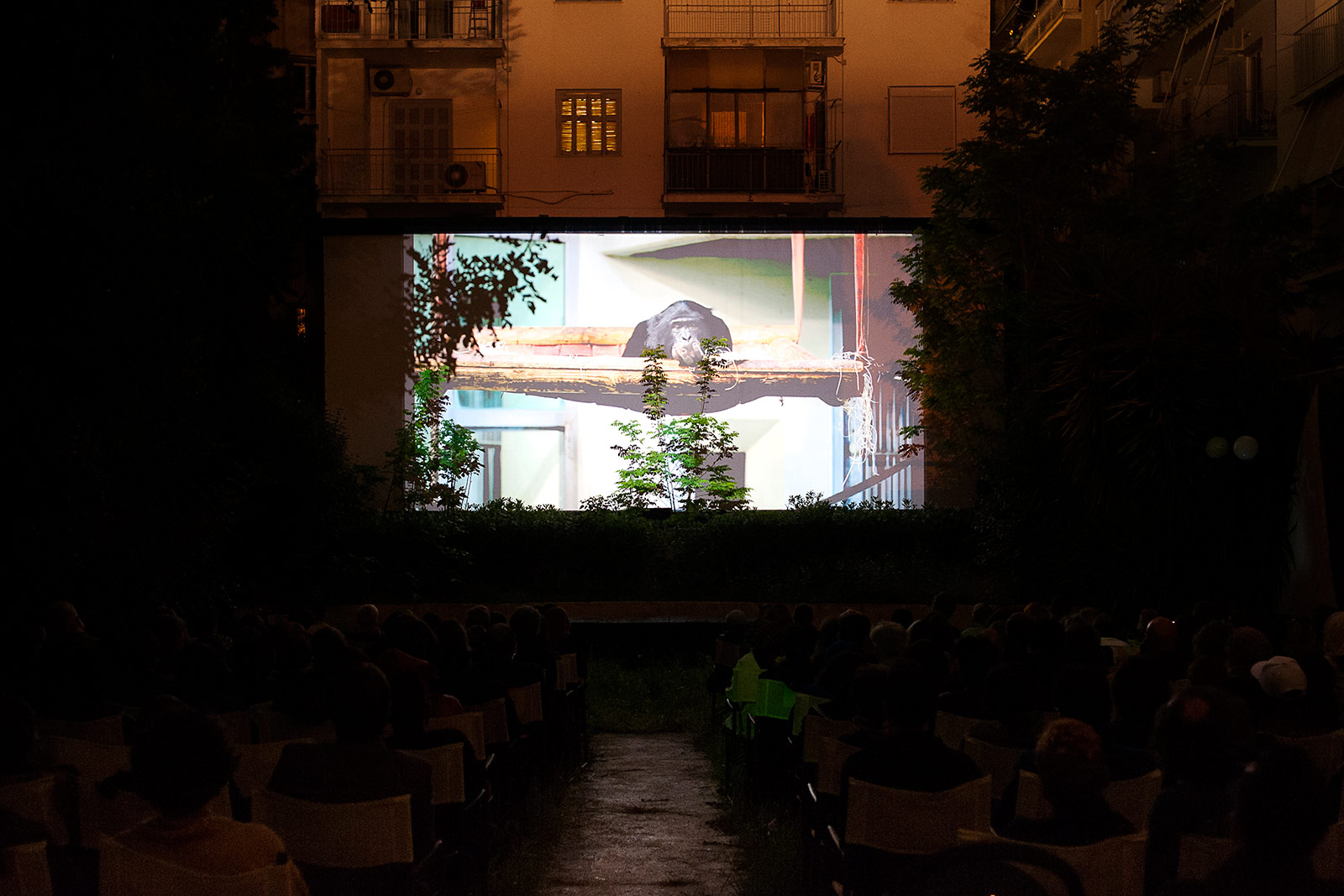 Finally an installation by Canadian Rebecca Belmore is at Filopappou Hill, where a tent – increasingly a long-term home for refugees and migrants – has been hand carved in marble. 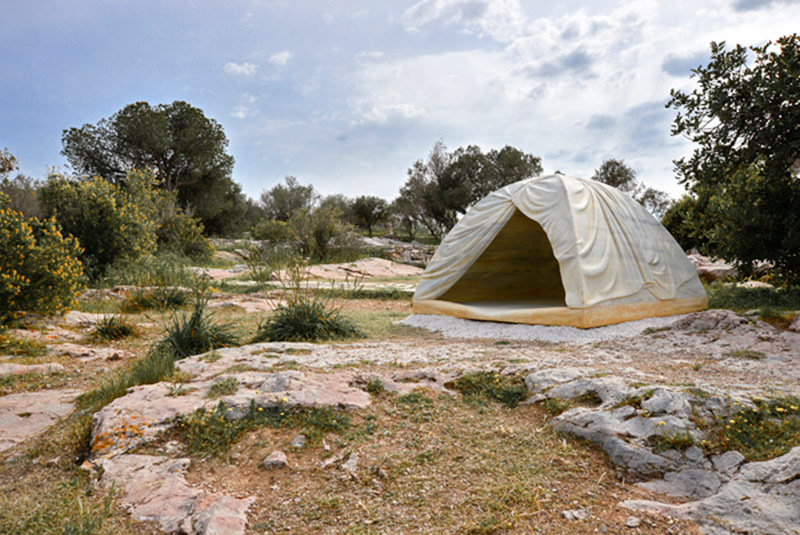 Last stop is Benaki Museum. This site, according to curator’s statement, affords an “opportunity to investigate the untold, unfinished, or otherwise overshadowed histories and to take inspiration from novel museology”. The combination of image and text are for sure more than important in Benaki’s show. 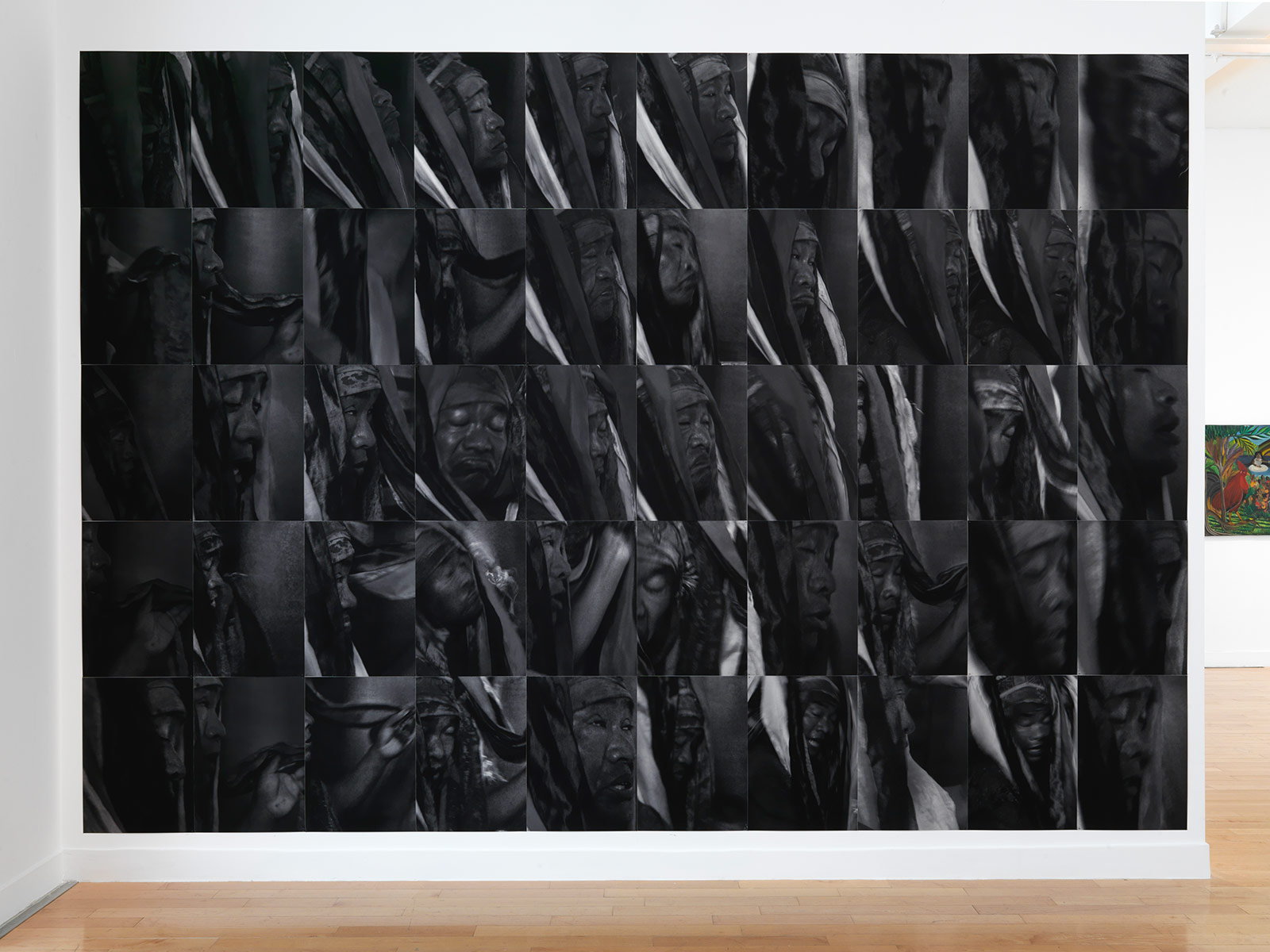 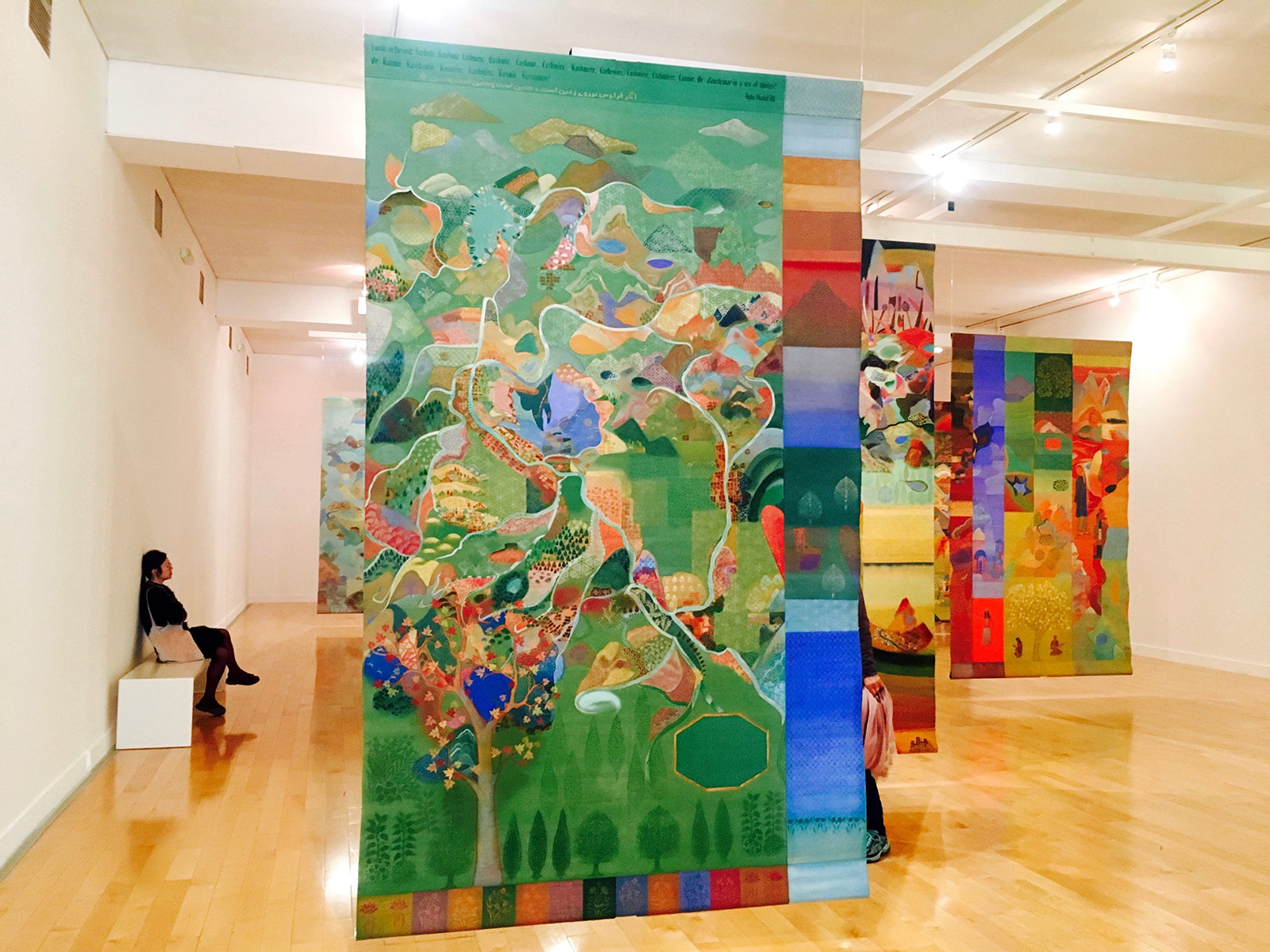 As a colophon, the split between Athens and Kassel will remain the most distinctive thing about this documenta edition. When Greek-German relations are in sharp decline under the weight of debt discussions and bailouts from the European Union, the decision of the German artistic institution to locate itself in Greece is provocative, at least. The show will run in parallel between Athens and Kassel for a month, as Kassel will open its doors the 10th June and will run until the 17th September, continuing the learning/unlearning exercise. And the hope that documenta 14 will amplify the message to the world that, even between bleakness and pessimism, we can build the future we envision for ourselves.
The complete artist list participating and venues in documenta 14 can be checked here.