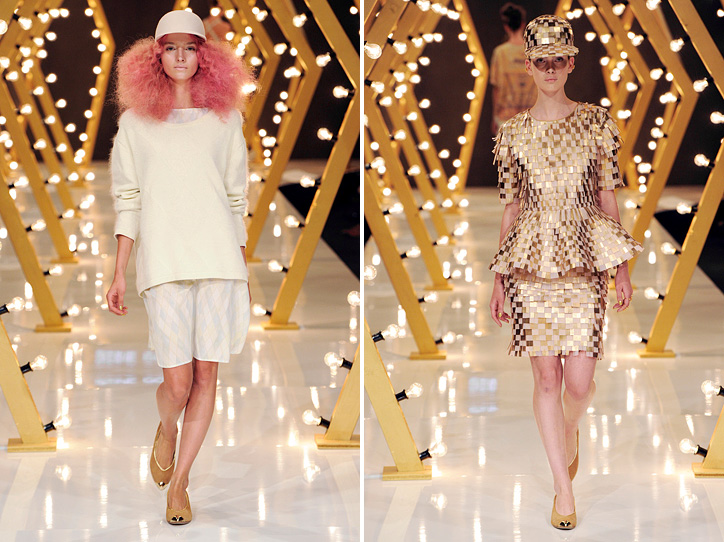 Officially we are back after vacations and we retake our Daily Metal with a review
of the last edition of Copenhagen Fashion Week introducing new collections for Spring / Summer 2013. One can't ceases to surprise. Frankly, we experience a golden era of the Danish fashion design, here and now, led by Henrik Vibskov, Stine Goya, Wood Wood (including new collaboration with Kenzo), Peter Jensen and the up and coming Soulland – gathering momentum within this establishment– which through one of the best after-show-parties in the last editions.

Swedes are always willing to pop up in the Danish capital, mostly at Gallery Int. Fair, a place no one want to miss it. This year highlights, in addition to the Danes, followed the presence of Johan Lindeberg, who came to introduce the new collection of BLK DNM, some sort of legacy after breaking off his previous namesake project. For sure, would be not fair to sum up this fashion week with those names only. Designers of the likes of Wackerhaus, Moon Spoon Saloon, Anne Sofie Madsen, Jean/Phillip, By Malene Birger, Bruuns Bazaar or Gaia are not other than the confirmation of the strong condition being experienced the Danish fashion industry. There were more than 40,000 visitors in 3 days and Gallery had a new record of visitors. A city has provided asylum for the fringe of Scandinavian fashion. Golden times.

As a matter of fact, Henrik Vibskov was the first of the list to show up. “The Transparent Tongue” was the name of his show. Good name in fact, due to the empty set up right before the show, no installation – which is nothing conventional, or better said: something weird for a Vibskov show. Few minutes after, two guys dressed totally black, extended a big fabric all over the set, which through air began to be inflated, turning into a giant pink tongue with suckers. Henrik has been showing in Copenhagen Fashion Week since 2004, and at Paris Men’s Week since January 2003. He is the only Scandinavian designer on the official schedule of Paris Men’s Week and recently was elected as new member of the Chambre Syndicale de la Mode Masculine. For this show, he decided to use only black models to boost the contrast with the off-whites and palette range of the garments. “The tongue is a symbol, it can be a symbol of sex or the tongue as a cleaner. You see on the prints a lot of dots and a lot of elastics on the shoe and the hair, like the tongue bit under the tongue. Seek-wise we saw that in the silhouettes in the knitwear and the colors. The fact that the models were all black is more conceptual, it was the first time I said let’s go for black skin, just aesthetically and color wise, not as a political thing but more like aesthetics. I’ve always have worked with black skin model but this time it was all of them, very difficult – 90% was street-cast. to find all”. The after-party took place in the backstage and over the catwalk, a magnificent location, a postcard from Copenhagen. 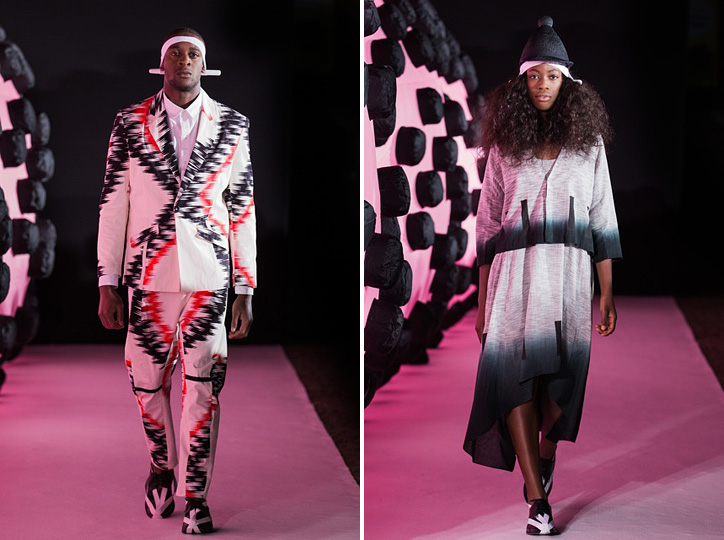 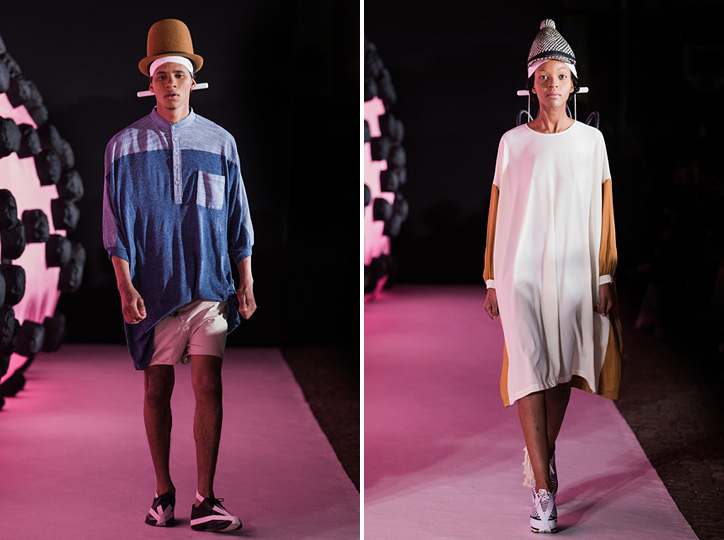 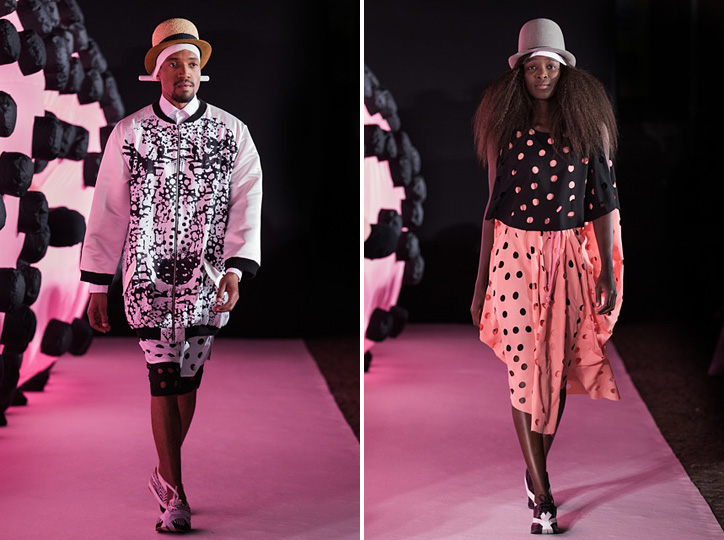 The morning after we had a meeting with Stine Goya. She is a wonderful person, always up for a little chat, even she was constrained by time due to the preparations of the show. She walks her path, building a profile, which is already identifiable. Her SS12 Collection La Parade Merveilleuse was a melancholic vision of a crisp shimmery way of living. Prints with optimistic clowns and circus-like motifs and her usual palette of pastel tones, gold and ochre, among to the vivid pink and the deep midnight blue nuances. Very wearable indeed, Stine achieved again to tear off the craving of the audience. “All the girls at the show has different splashes of characters. We have done many different prints for this collection, one is a very traditional helicon figures, then we had the clowns and melancholic tears, and old castle…We wanted to do something extra, take care of scenography, work close with make-up artists for the perfect look of this collection. Using silks and having all the prints, which is very common for my brand. WE open new markets for the UK and Japan, which is something new for us.” 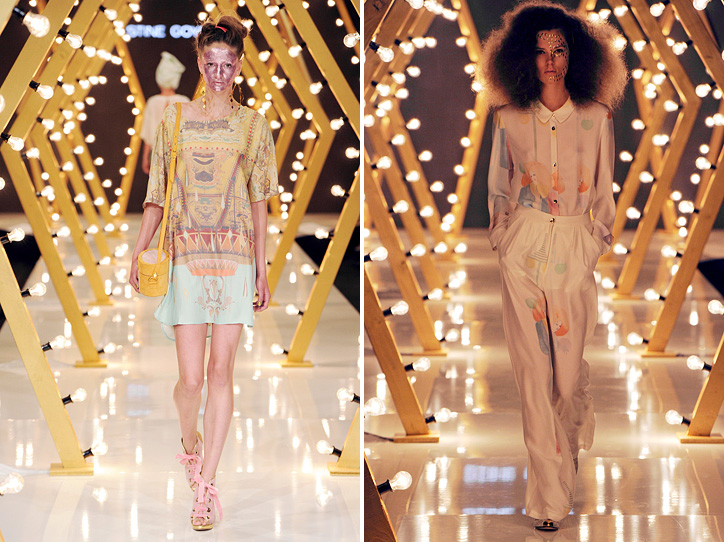 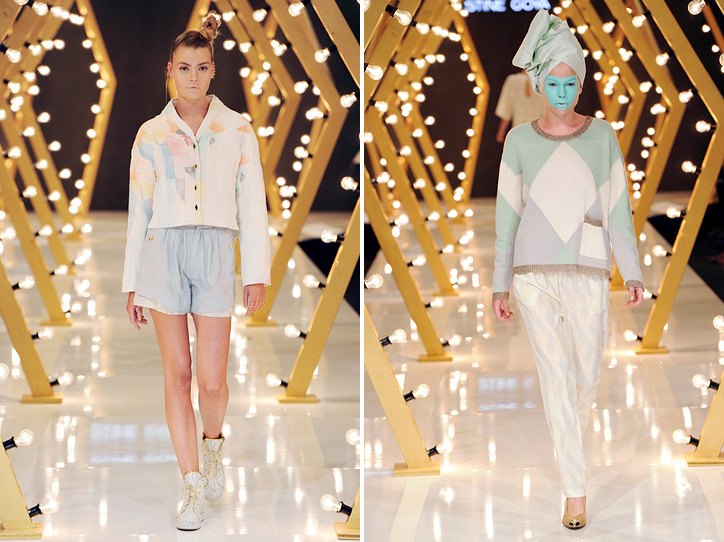 So to continue taking advance of out time, we had an appointment with Peter Jensen. This was the first time I met Peter, wow 17 years already living in the U.K. His pungent British accent gave him away. He is one of the Danes – if we still can catalogue him as such – with the more experience. He has shown in London and New York. For sure, he was glad and happy to come to introduce his SS collection to his homies. “I feel like I belong in the middle of those two countries. This SS collection I tried to focus in a unisex silhouette, men and women dress in the same sort of vein, androgenic. Last time I came to Copenhagen was in 2009, this was the third one here. We show always in London Fashion Week. We were kindly invited to come here and shoe the collection for this season and we said yeah and people here really like what we are doing and we appreciate that. It’s very nice to come home, so get homesick sometimes (laughs). We did New York for two seasons, we very much like to do something different, so we wanted to try. We had the lovely Nina Persson from The Cardigans, she was singing live at the show, singing a sad love song and that was perfect since the show was on Valentine’s Day. It was absolutely brilliant. We like to use a muse on every collection, a female figure. This time was two muses actually, we looked at Mick Jagger from ´61 to ´64 and Tippi Hedren, you know she did the lead role at Hitchcock’s Birds. You see this on the prints in the silhouettes with college sweatshirts and the pristine.” 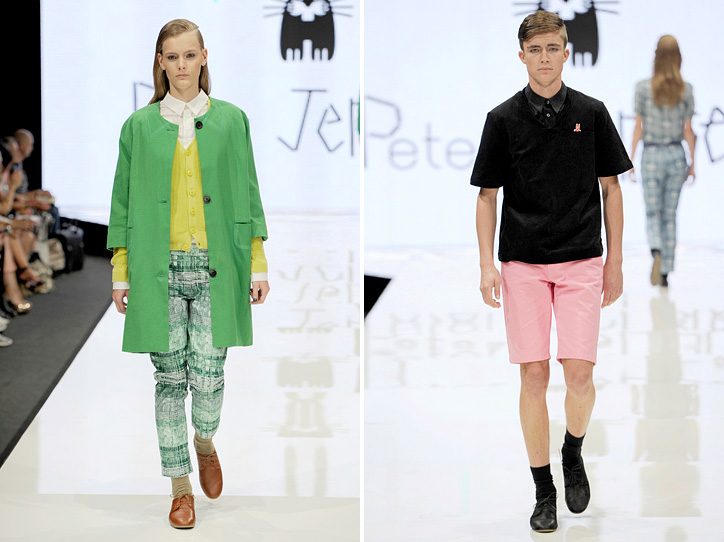 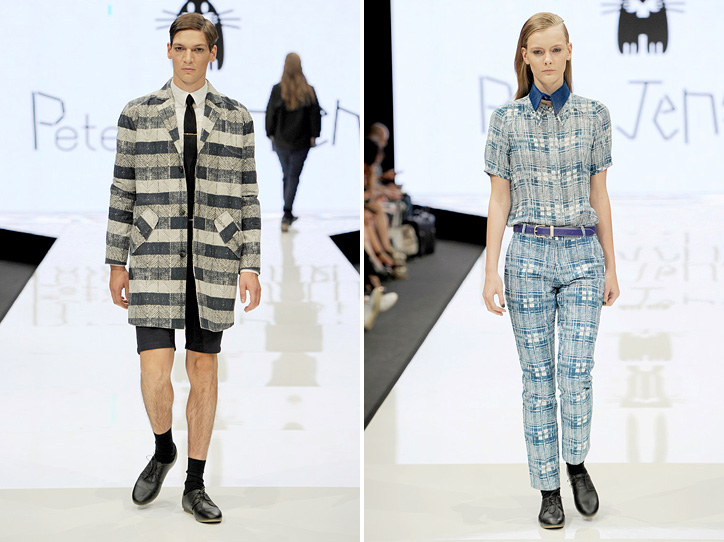 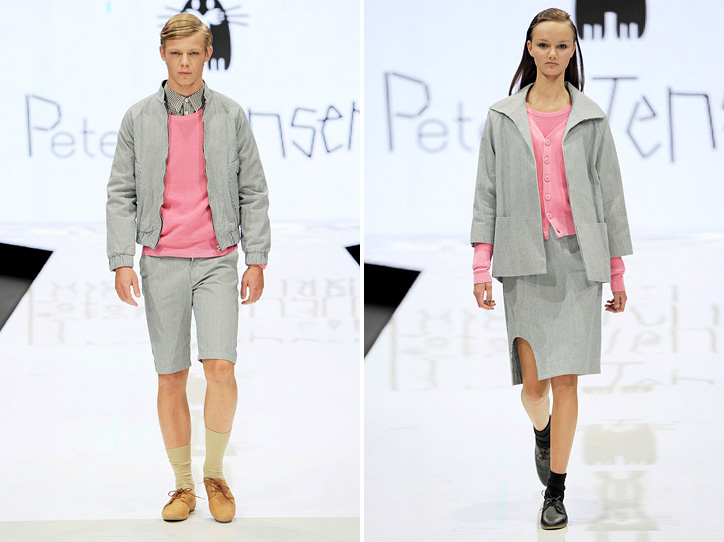 Friday night, we were conducted to a semi-abandoned cottage somewhere in the outskirts of the city, not too far way though. Soulland,’s Bourgeoisie – their Spring/Summer 2012 Collection – was introduced there. Not a catwalk but a stroll around the mansion with models in a row, easy to reach outfit by outfit. Soulland is a menswear brand. Silas Adler, designer of the brand, wanted to add interaction to this show through the scan app which provided extra information, a good way to enhance the experience. He carries on the prints on shirts adding embroidered on sweatshirts in the same spirit of this palace-mansion á la French bourgeoisie where the event took place. “The collection is some sort of study of the French academic over class. I do this thing on every collection. The inspiration is linked to a country. Last time was about Russia and a wonder bout America, always related to some cultural event, something in society that has nothing to do with fashion. So this time I looked at building in Paris, power buildings and houses, churches, cathedrals with draws we made in embroideries. We did some prints with the marble and ornaments from the French legacy with castle and stuff like that. Then we has some reference to the French luxury fashion with big printed logo, it’s like ironic and extravagant garments. It is an ironic vision with love to the French fashion houses, the couture fashion. The collection and presentation is very different of what we’re been doing before. People expected a big catwalk show and we wanted to turn that down with a walk around presentation with all the models standing and scan the code to get the catwalk show on the phone. So that’s my way to merge the digital world with the fashion world. We are very happy of the way things are going. I think we are in the direction we really wanted to go, how we as a team make thing happen. The focus right now is enormous, everyone form webshop, PR and sales. More and more shops will buy the collection. For me it’s important if we have fun. For us right now it’s all about Germany, U.S, Scandinavia, UK and Asia is time to grow there.” A show party was in the garden, BBQ and drinks to eventually both floors of the house turned in dance-floor and the whole mansion up side down. Soulland is def established as one of the most interesting young brands in Europe, truly new blood – like the little brother who now hangs out, get laid with chicks and no needs to ask papa for cash anymore. 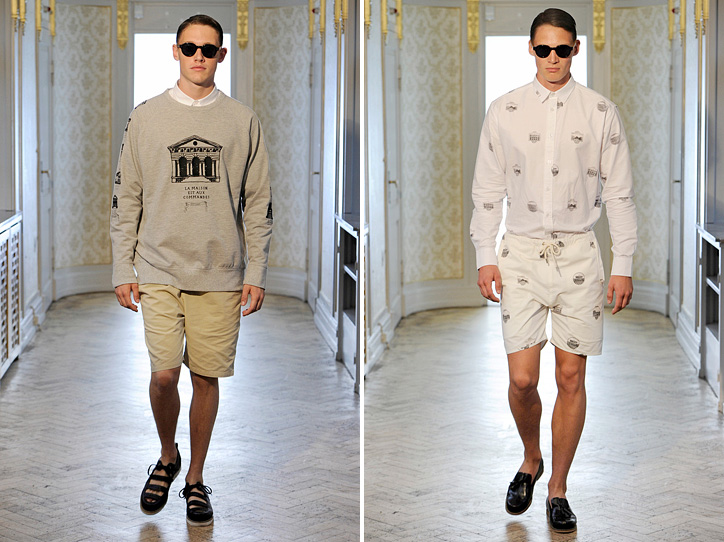 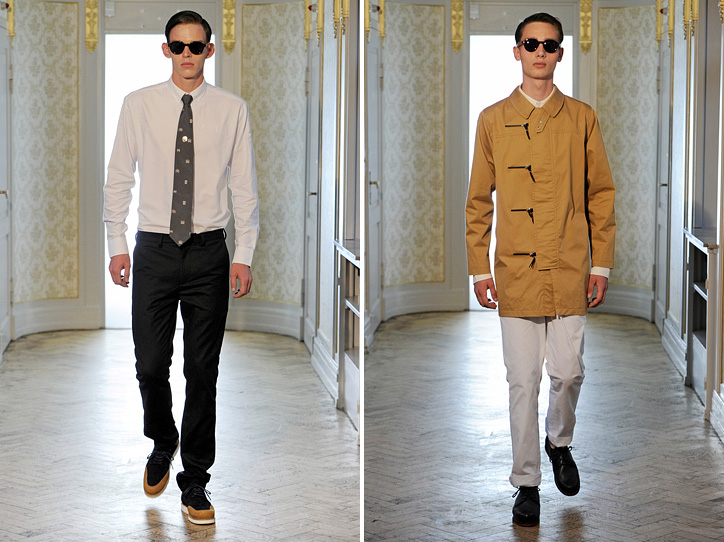 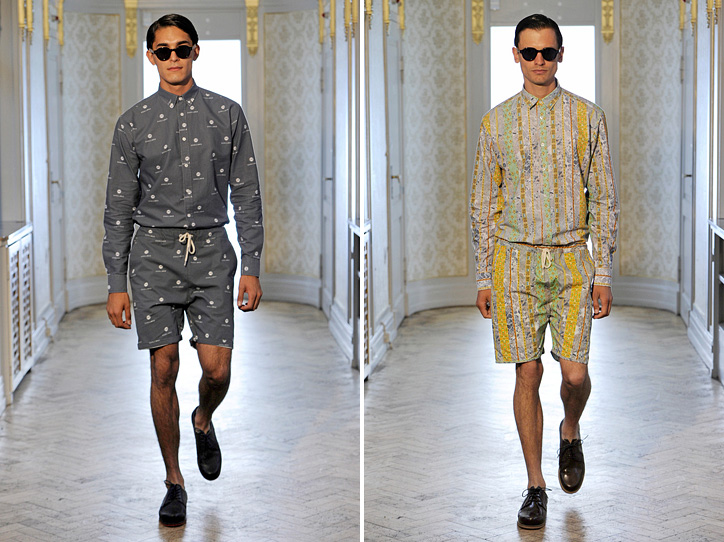 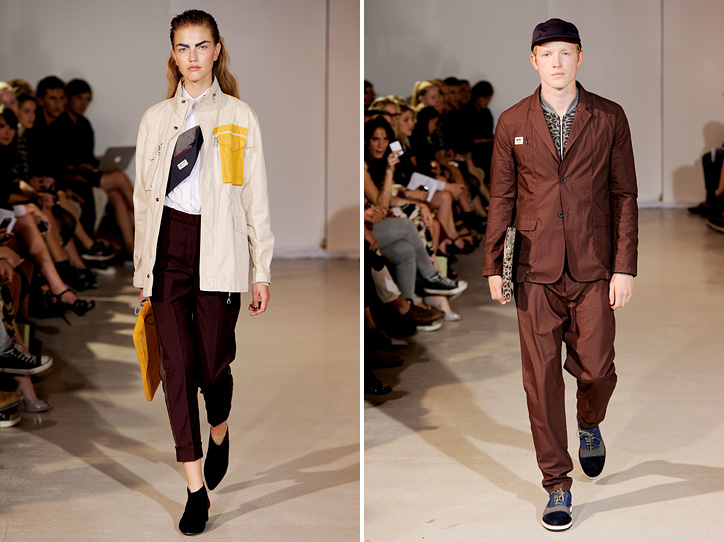 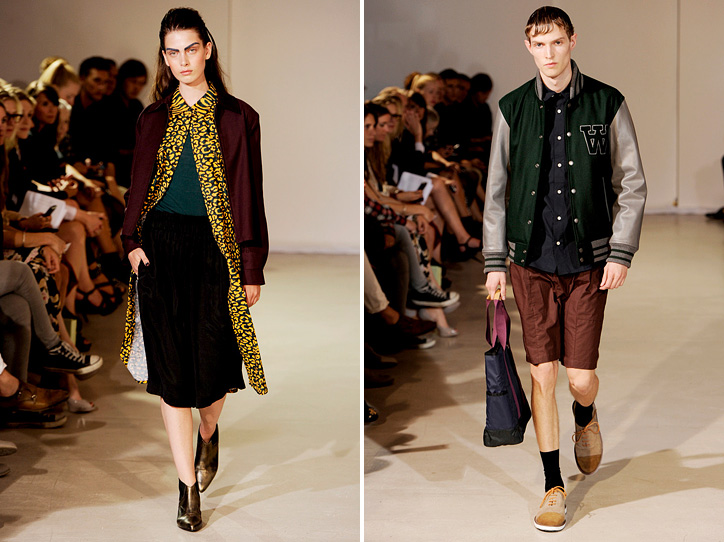 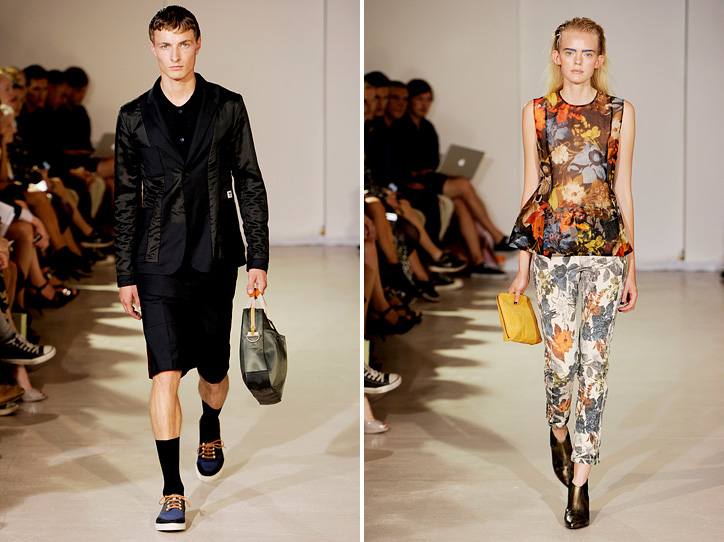 All in all, Copenhagen showed off his strength and good shape for this modest but restless industry called Scandinavian fashion design. The trade show has become the second biggest trade show city in the world with more than 2.700 brands represented. CEO Christian Gregersen from Gallery states: “The most important thing is not the number of exhibiting brands, but the increasing number of high caliber, Scandinavian and international fashion buyers that have visited Gallery this season. And that my phone did not ring for 3 days – meaning that the exhibitors were busy doing business.”