A sense of rootedness 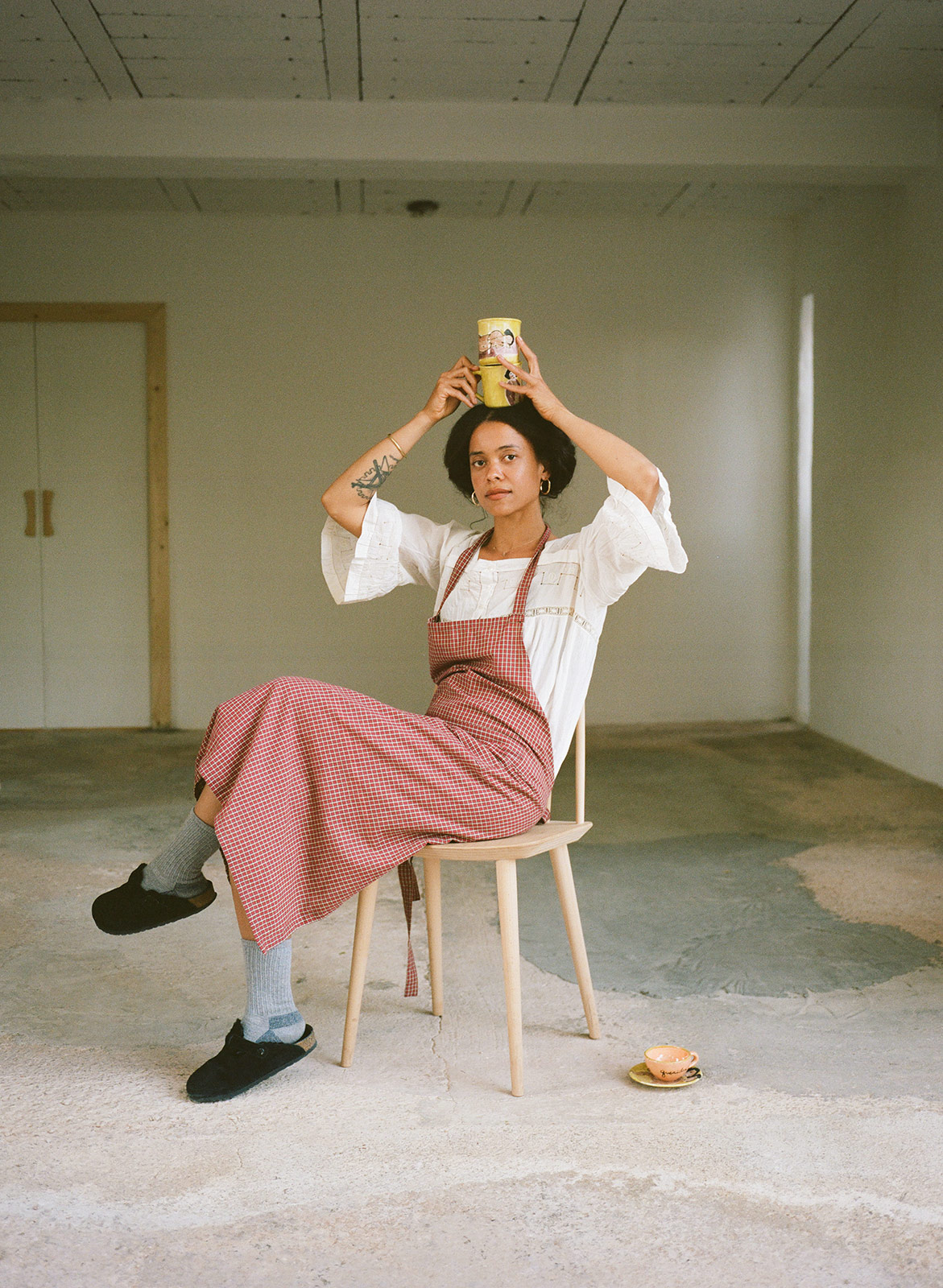 Mozambican painter Cassi Namoda’s new works depict a dreamlike landscape filled with figures that are at once fantastical and familiar. These haunting, poetic paintings are grounded in Namoda’s deep interest in African literature, history, and philosophy. Here she discusses the artists that influence her and the ideas that compel her work.
The scope of this painter's body of work is broad and global in its reach. There is a sense of rootedness even as it traverses culturally disparate scenes, subjects, and symbols. Born in Maputo, (Mozambique) in 1988, Namoda has travelled widely ever since, having lived in East Africa, Southern California and between. Though she is a young painter, her work reveals the artist’s old-world sensibility and her thorough engagement with history. The relative simplicity of the figures and landscapes that emerge in these paintings is a distillation of the much more intricate philosophical ideas that Namoda is interrogating. There is a rigour of thought and study that comes through in these paintings with subtlety and ease. 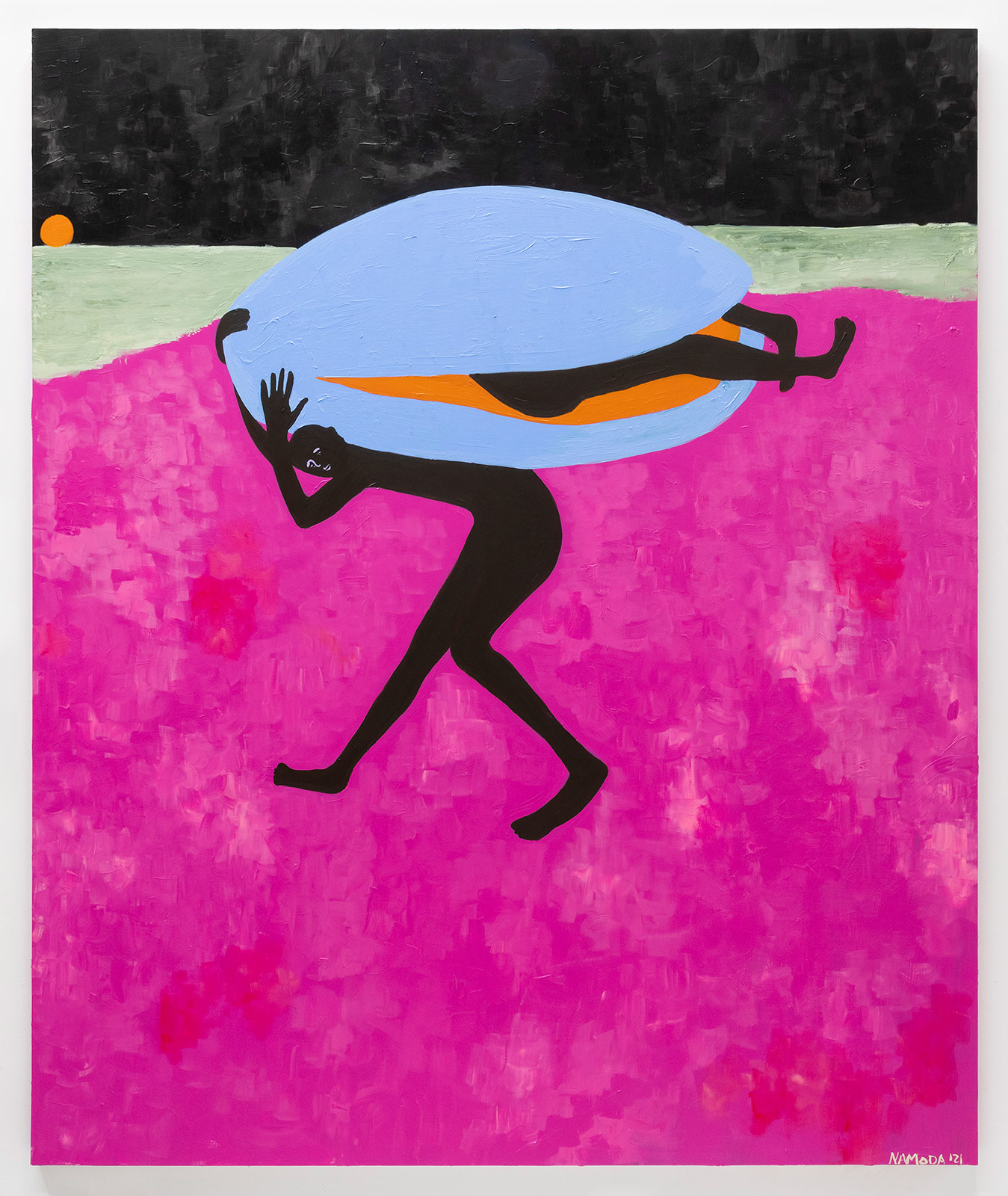 The painting Condemned to perpetual earth, is a reinterpretation of a figure lifted from the work of Flemish Renaissance painter, Patinir. There is an unexpectedness and oddity in both Patinir and Namoda’s rendering of landscape, particularly in the mystical and spiritual undercurrent of this suite of paintings. As we spoke about Namoda’s other influences from the prolific painter Bob Thompson to Mozambican author Mia Couto to the remarkable, self-taught artist, Bill Traylor, it became clear that in Namoda, one finds someone who is as skilful a researcher as she is an artist.

In conversation, Namoda expresses, “We don’t really have a place to present new ideas, we don’t have institutions that give us the opportunity to talk about philosophy anymore.” I strongly agree that the lack of such institutions is felt acutely, particularly for the African artist. However, in Namoda’s work, there is an invitation to probe these ideas and consider our own relation to the subjects that populate these barren landscapes, as we watch them mourn, migrate and occupy unnamed shores.

There is urgency and gravity that permeates these paintings and makes me believe the moments pictured here are defining moments. The dreamlike atmospheres of her most recent paintings are interspersed with seemingly biblical characters. These figures straddle the line between allusion and fantasy. And, as is generally the case in Namoda’s body of work, the references are adapted so inventively that the most ubiquitous symbols remain mysterious and strange.

Throughout there are conjoined twins which mirror the tale of a whale whose body is cropped out of the frame, a group of ritual bathers congregates by the shore mourning a dead whale, and a man and woman hold a jaw bone in a painting titled Sacred Offering. These symbols are culturally specific, lifted from Mozambican life and literature, but they are not immediately placeable, in time or place. In them, memory and fantasy cross-pollinate, departing from the familiar. In Namoda’s words, “the new works are in touch with reality, but also represent dream life.” 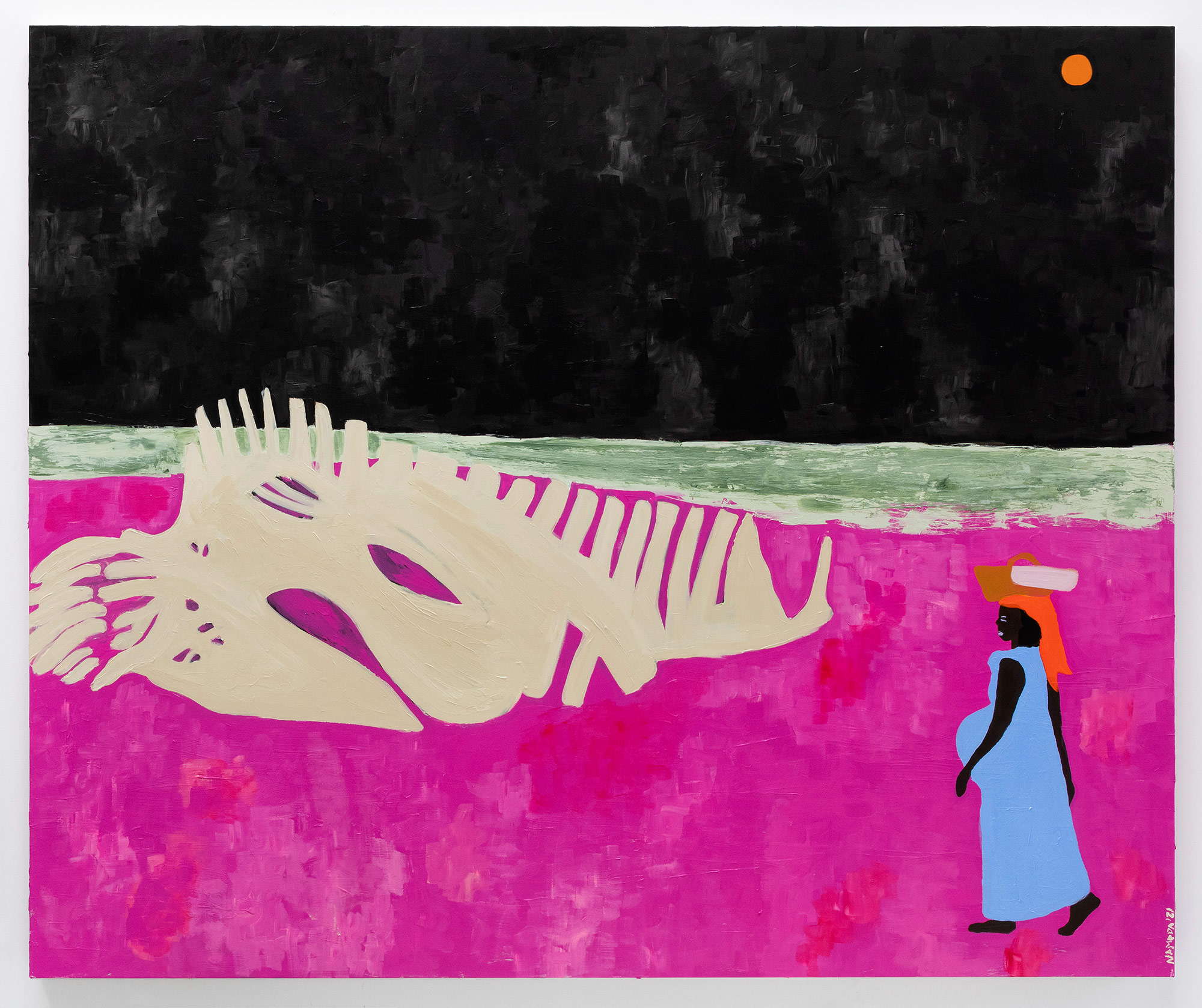 As I revisited these works in my writing, I could not help but think of the ever-relevant parables that appear throughout the bible. They are lasting and effective because of their approachability. The Parable of the Lost Son, for example, offers accessible archetypes and conditions: a father, a son, loss, shame, reunion, forgiveness. Both, parabolic and allegorical, Namoda’s paintings appeal to the viewer in a similar way. In Carcass of Remembrance, a pregnant woman carries a burden on her head as she walks before the carcass of a dead whale. Death is recogniSable to us, as is nativity as represented by the pregnant woman. In this way, this otherwise mimetic portrait of a commoner going about her day is upended by the appearance of the skeleton of this grand animal. The whale is a recurring motif; we see it in motion, as it is dying and finally we see its remains, stripped totally on the shore.

As we spoke, Namoda explained that the whale emerged from her reading of the novel Sleepwalking Land by Mia Couto. As I understand it, the whale in Couto’s context is a metaphor for a precious resource, one that is immediately pillaged for its meat and fat. Couto likens the whale to his nation. Yet, in Namoda’s context, the whale is refashioned and takes on a mystic quality. I learned that the whale is an anomaly because once the Civil War erupted in Mozambique, the staple fish on the island was mackerel or carapau. Because of this, when a whale washed up on the island it represented a departure from the monotony of daily life. Still, without knowing this, one senses the import of the whale’s presence, its size, and its stature against an otherwise stark shore. There is an insistence in these paintings on the relation between human subjects and their landscapes.

For me, the whale is a kind of connective tissue between the seascape of the paintings and those figures who exist within it. The interconnection between human and non-human life is a criterion of the way people live and the values they hold. Namoda says of these paintings that, “climate change and scarcity were part of her thinking.” The complexity of phenomena as calamitous as global warming or depleting natural resources is embedded in the allure of these sometimes cryptic and enchanting paintings. 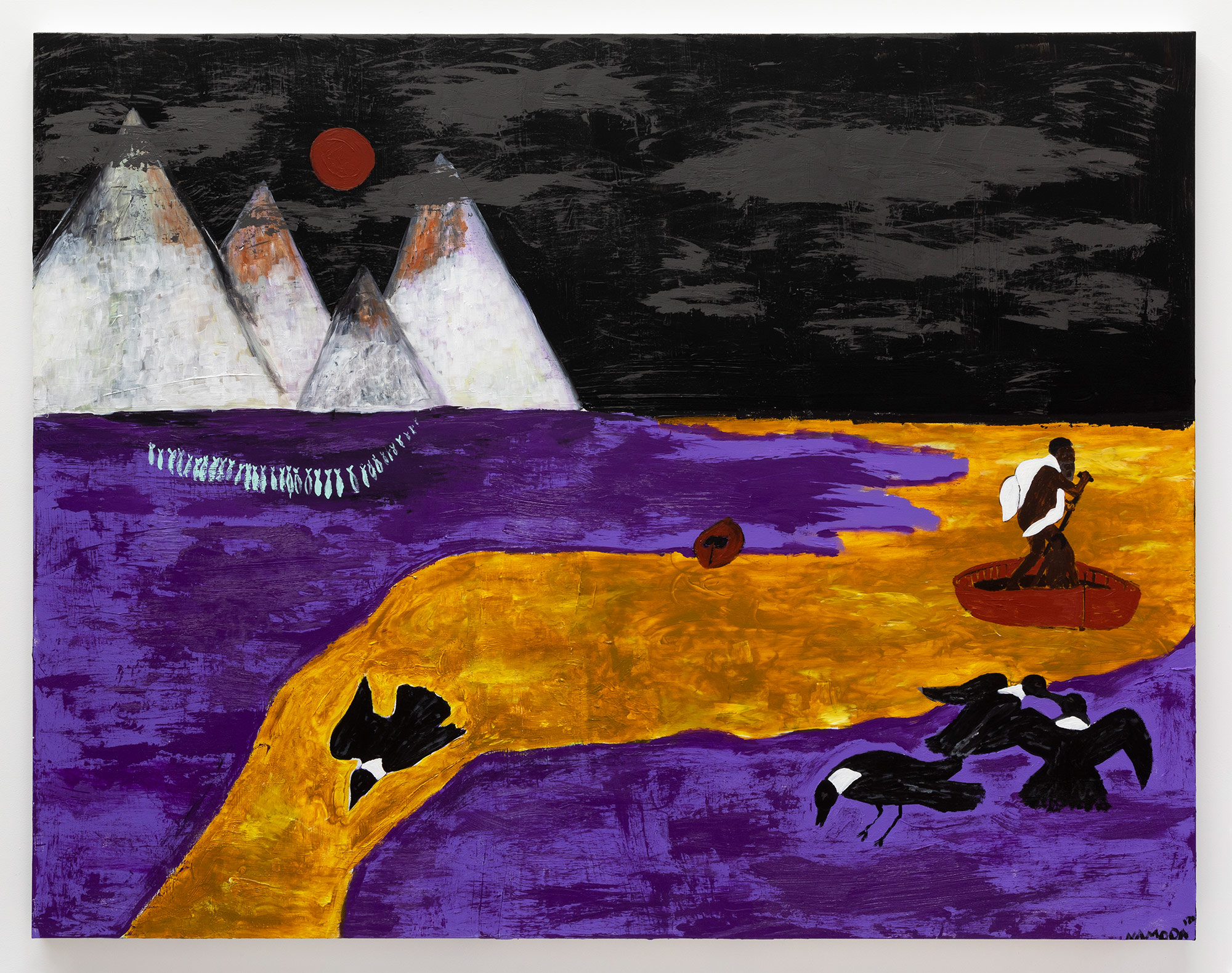 In these paintings, the indefinite is foregrounded. The tangible and the otherworldly are held in equal regard. Particularly, the use of colour in these paintings disrupts and makes strange the landscapes that Namoda presents. In the painting pictured above, recently acquired by the Studio Museum in Harlem, a winged figure sails along a golden river bordered by deep violet land. This piece and the series of ‘purple paintings’ that it is bracketed with came before and led to, The sun has not yet burned off the dew, a suite of paintings by Namoda in preparation for an upcoming solo exhibit at Mendes Wood in São Paulo. The sun has not yet burned off the dew is full of sensitive magenta coasts, blazing orange moons, and black horizons.

In these works, colour not only extenuates form but enlivens it. As we spoke about this, Namoda explained, “The colour black initiates a welcome into the unknown. It invites the viewer to let go of ego. In that way, it is very Godly and very spiritual.” We must fill in the blanks of the unknown in our own way, be it death or cultural decline, or ecological disaster. 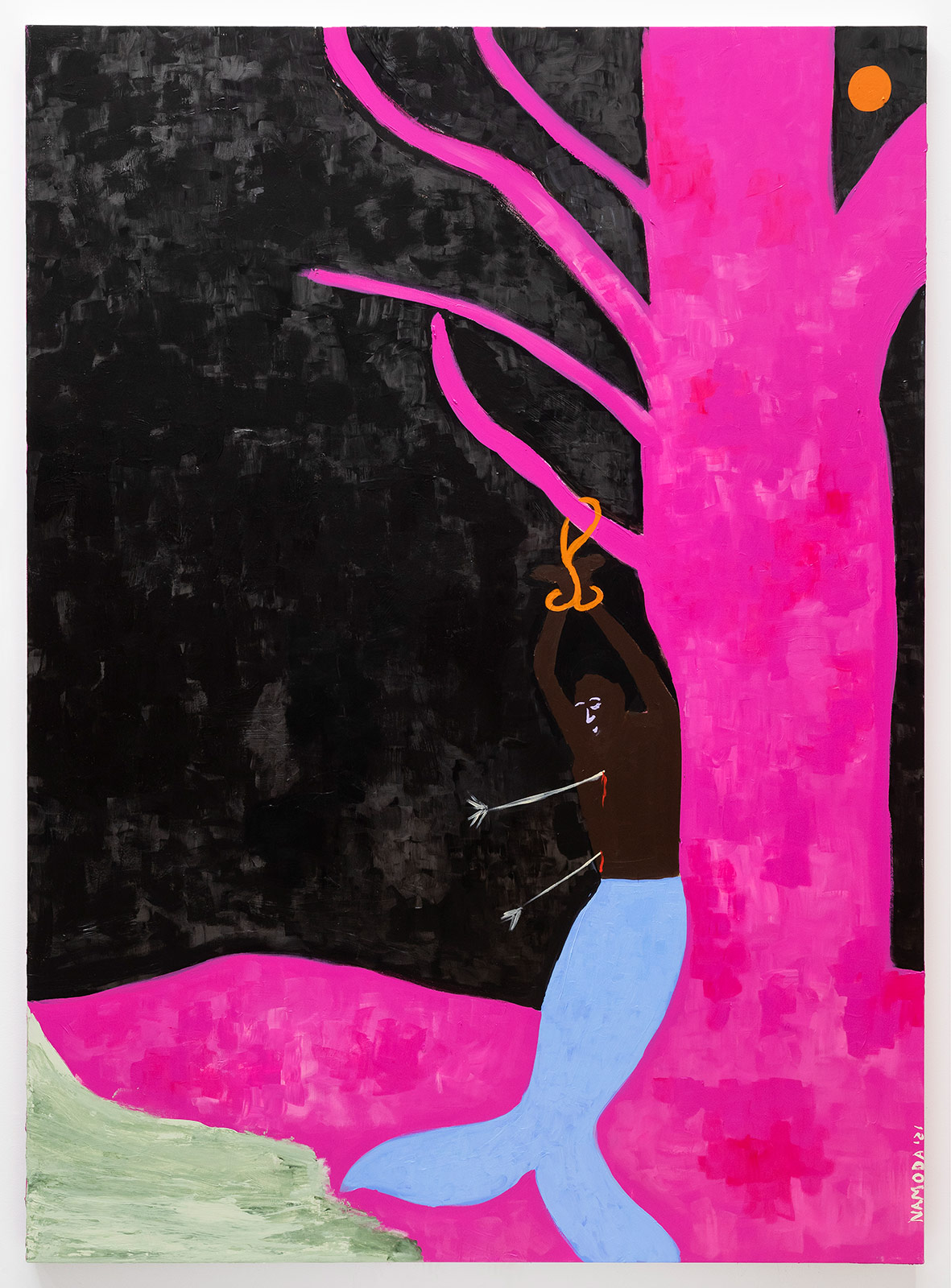 The paintings posit that the unknown is something better embraced, a fixture of life to be resigned to and inevitably affected by. In Ebbing tide and the sun that fell to its knees, a non-human figure is martyred and hangs from a tree with a languid look on its face. It is solitary, contemplative, and almost archetypical. It embodies the most symbolic act of martyrdom and ceremonious death. There is a musicality that emanates from this painting and the others in this series. Be it a cry or a song or the sigh of a whale, it is a resounding sound, one that goes on.

Aptly, Namoda states that “In the west, we think about death in a dark, morbid way, as something to be afraid of, in some ways I wanted to challenge that.” Death, in this case, is not a conclusive end, but a generative beginning. The death of the whale is vital to the development of the figures that encircle it. It lends them meaning. Similarly, mortality gives consequence to all life, our lives. We owe thanks to the artists among us, in large part, for helping us cope with this. Among them, Cassi Namoda’s work should be counted. 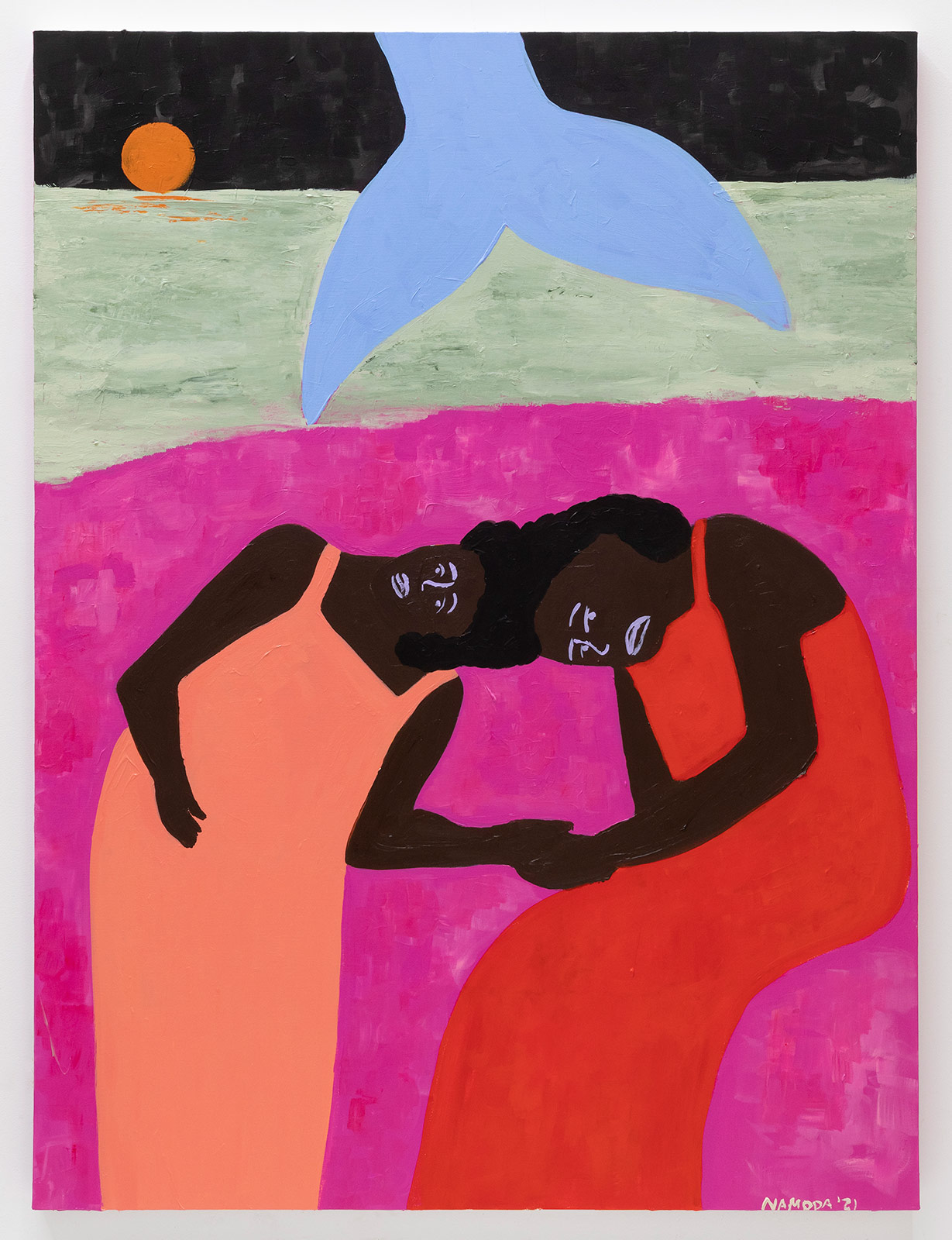 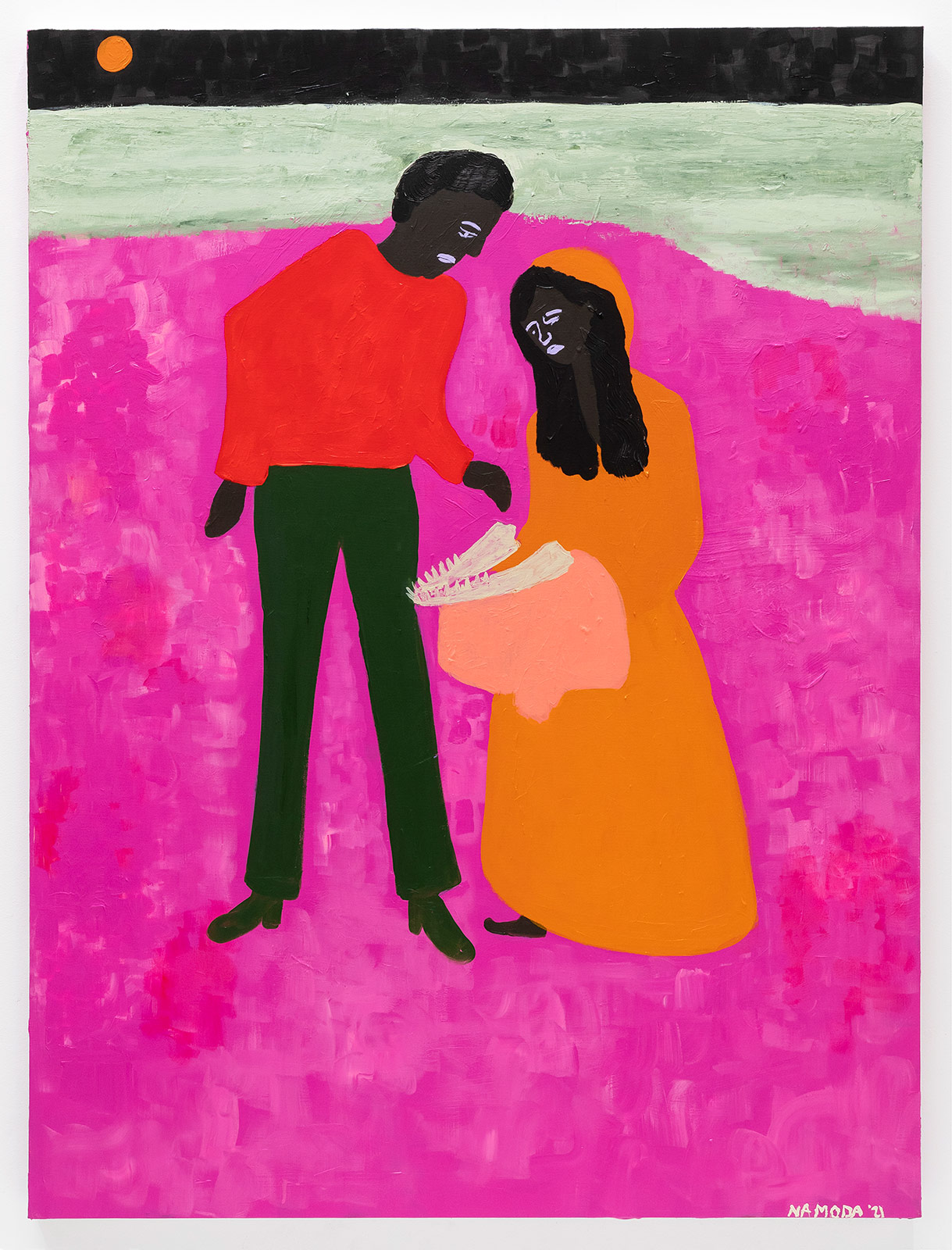 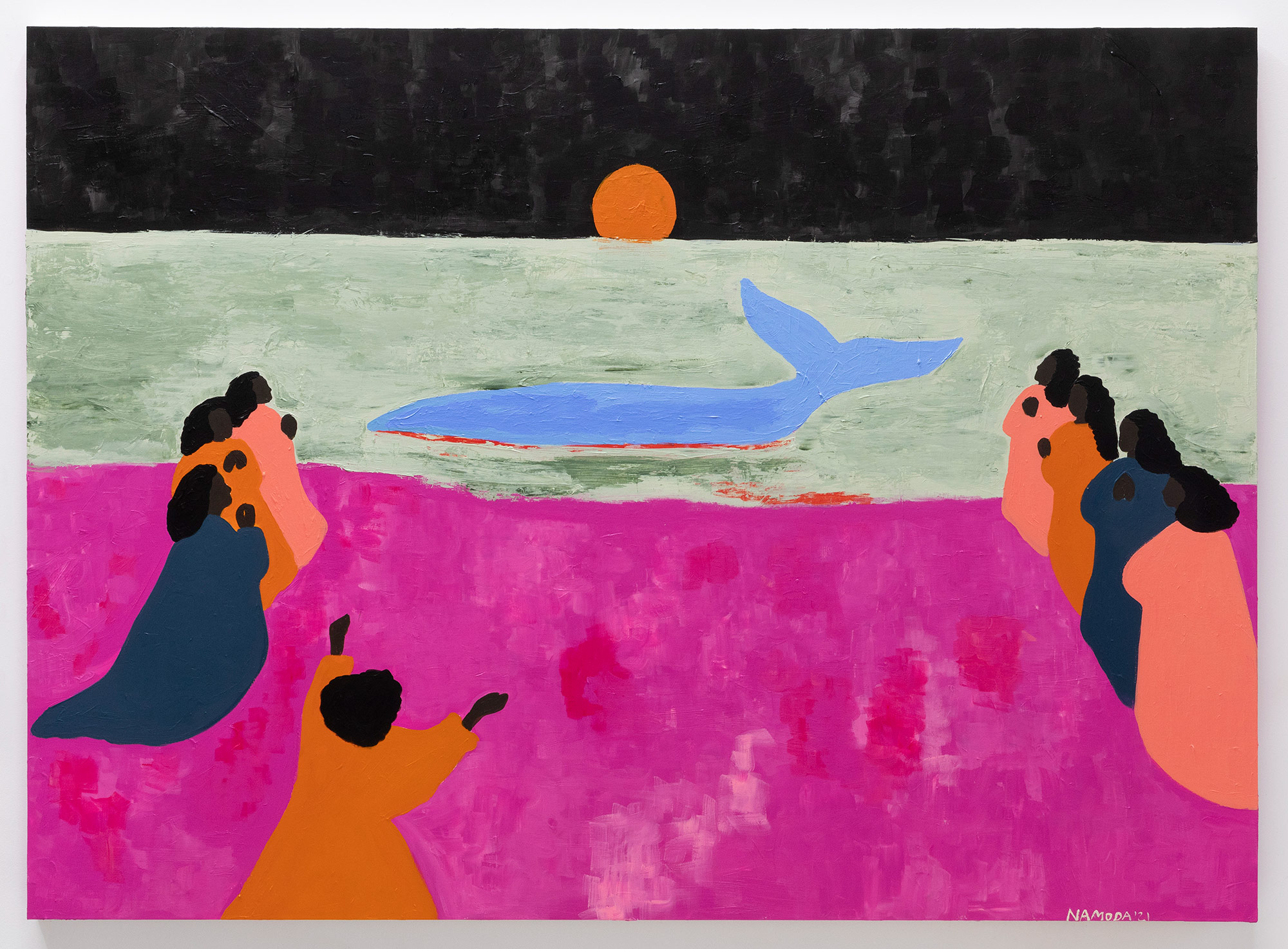