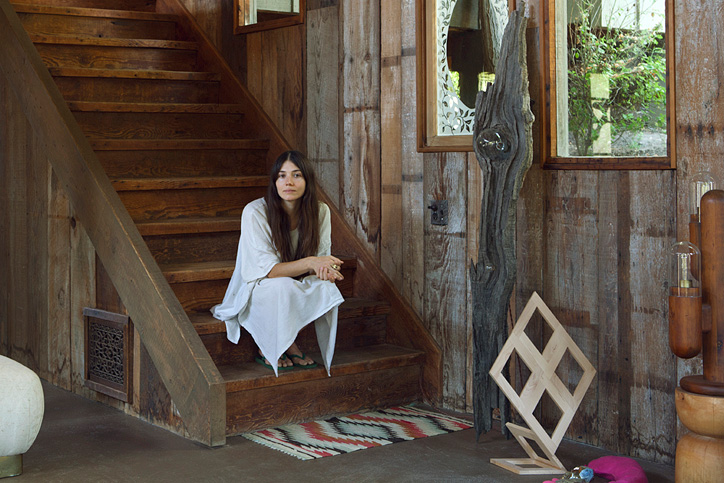 “Do you want a kombucha?” It’s the first thing artist and jewelry maker Carly Jo Morgan of All For the Mountain asks when I arrive at her light-filled home in Los Angeles’ Topanga Canyon on a sunny afternoon. It’s a question indicative of Morgan and what I’ll come to learn about her: she is a designer who doesn’t care about the fashion world, a city-dweller living in LA's most nature-filled neighborhood, and a former East Coaster who’s sense of creativity, collaboration, wellness, and community is much more suited to California living.

She greets me at the windowpane door wearing a white tunic and flip-flops, her long brown hair – parted in the middle – hangs well down her back; she’s not wearing any makeup but her skin shines. Booboo and Wings, her two dogs, paw at my shins and run around excitedly. Before long we’re discussing the beneficial effects of hypnosis, the healing South American ritual of taking hallucinogenic ayahuasca, and whether or not past-life regression therapy works. It would all seem very woo-woo if Morgan wasn’t so down-to-earth – she talks like a sailor with a “no-bullshit” attitude, a disarming openness, and an easy laugh that comes quickly and often. Her metaphysical leanings and welcoming vibe are just what one might expect from a person whose work is rife with rainbow beams, desert acid weirdness, and ancient symbolism.

You’re likely familiar with Morgan’s jewelry line, which she started putting out in 2009 under the name All For the Mountain – it kick-started the trend of mystical-inspired, chunky metal accessories with cuffs, rings, and beautiful breastplates. It began almost by accident: “There was not really any thought process behind the jewelry,” Morgan, who was living in upstate New York at the time, says. “I just started messing around and then I got really into it. I sold a piece to someone and it got photographed on her during fashion week.” That’s when her collection took off, and imitations have been popping up ever since. Her attitude toward copycats, though, is as easygoing as her initial foray into jewelry making was. “It’s a compliment,” she says. “Everything good gets knocked off.” But now? “I’m trying to do anything but jewelry,” Morgan says.

Though her exceptionally crafted, handmade pieces caused a stir in the fashion world, it was a scene she wasn’t particularly stoked on. She found seasonal fashion calendars constricting and “to make money doing it, you have to wash your work out and do really mass-produced stuff,” she says. As it turns out Morgan has plenty of other options. An eye-popping silk painting of the word Sacred hangs framed above the bed she shares with her husband Matthew, and her colorful, mind-bending artwork (recently commissioned by L.A.’s coolest new Silver Lake juice spot) is now where her focus lies. She’s also turning her creations into custom rugs, writing a “spiritual self-help book” for kids starring Booboo and Wings, and curating women-centric art shows in Los Angeles. But her newest venture might be her most personal yet: after watching the documentary The Business of Being Born, which exposes the hospitalization culture of childbirth in America, Morgan decided to become a doula. Shortly after, she found out she was pregnant (her baby is due in February, making him or her a Pisces ’cause of course you’re wondering). Her training will benefit homeless and low-income mothers, women who Morgan’s soothing energy, enthusiasm, and authentic care will certainly have an impact on (when we hang out, she’s prepping to meet her first client, a 21-year-old recovering meth addict). “I’ve never done anything like this,” Morgan says. “I've always wanted to but just never known what it was going to be. Somehow it feels really safe and natural to do it with women. I never knew how to be of service but now, all of a sudden, it’s like, Wow, this is so fun. And to be there for their intimate experience, I just can't even imagine. I cry every time I watch a home birth video.”

Morgan seems particularly suited to being a doula, not only because of her impending motherhood, but also because of how grounded she seems, which might be a more recent trait. Though Morgan appears to be quite settled in Topanga now, she and Matthew would often move on a whim, going wherever “felt right,” which included stints in the New York Catskills and tiny California coastal town Bolinas, and living in a camper in the Joshua Tree desert. As Morgan takes me around her idyllic digs, I get an even better sense of the simplicity and creativity that permeates her everyday. She shows me the outdoor garden she created that she and Matthew recently got married in (replete with a peace sign fountain made by a neighbor), the completely bonkers beaded bustier she wore in the ceremony (made specially for her by artist Elena Stonaker), and the small wood-paneled room off the loft area that she’s making into a nursery (it looks out over the wild forest-y part of their yard). Her gem collection is impressive and beautiful vintage furniture is displayed everywhere, along with esoteric curious, and unique works of art made by friends. It’s an environment that stokes the imagination as it makes you feel wonderfully at home. All For the Mountain might not consist of a jewelry line much longer, but it’s clearly a way of life, one that Morgan is eager to continue sharing. “That’s exactly where I’m at right now – how do I use my business and turn it into something that is fun and sustainable that allows me to actually make art?” she says. “At this point with All For the Mountain I don't want to make jewelry, but I do want to find ways for people that connect with it to reach out.” 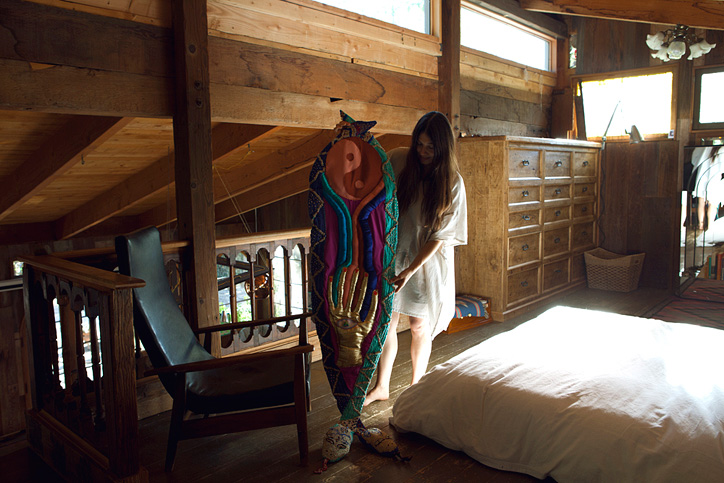 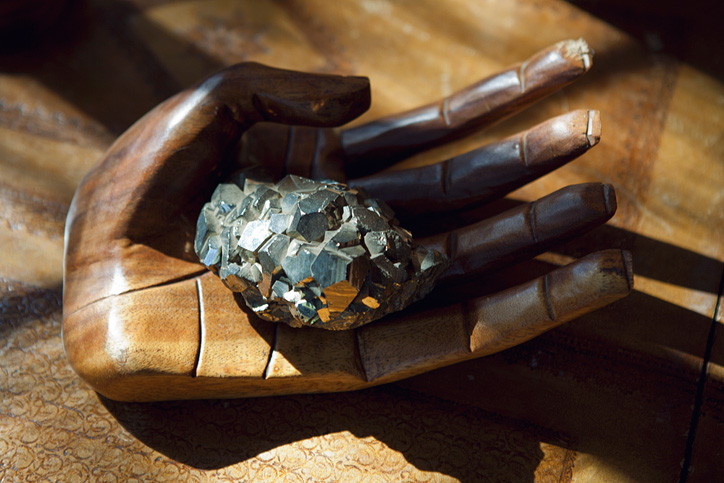 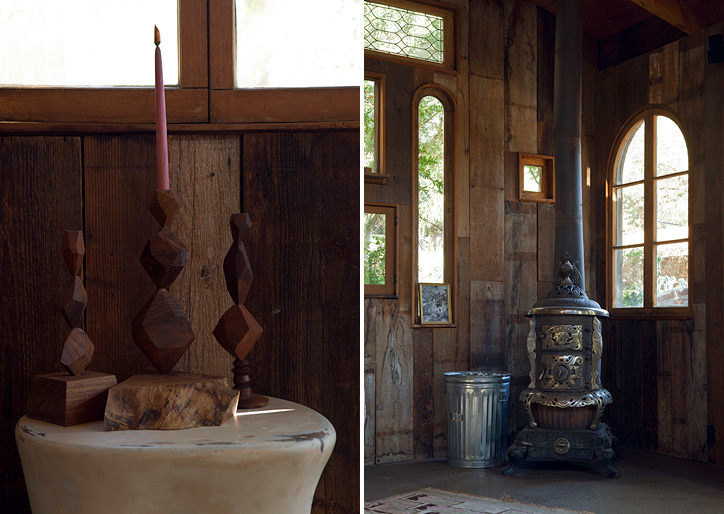 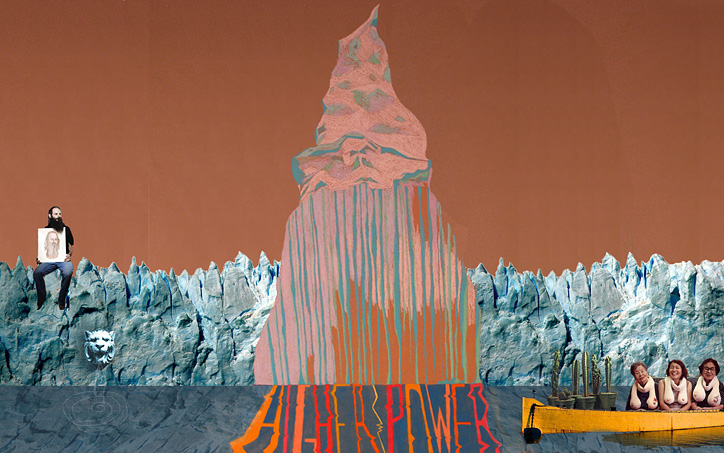 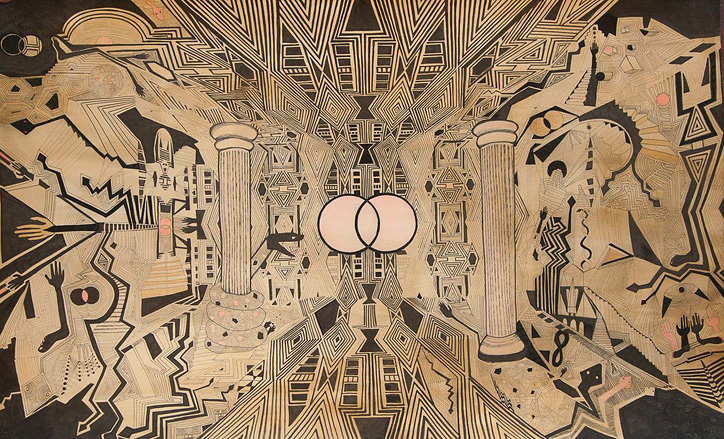 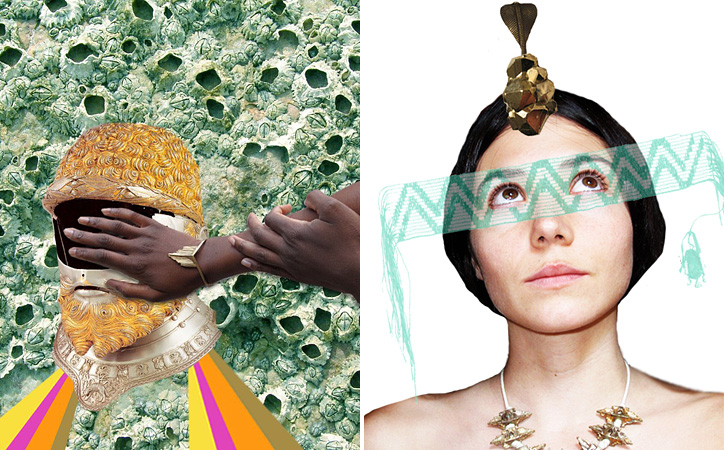 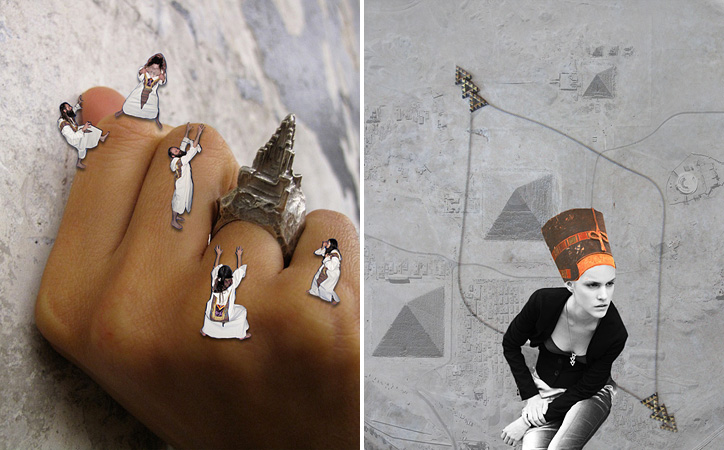 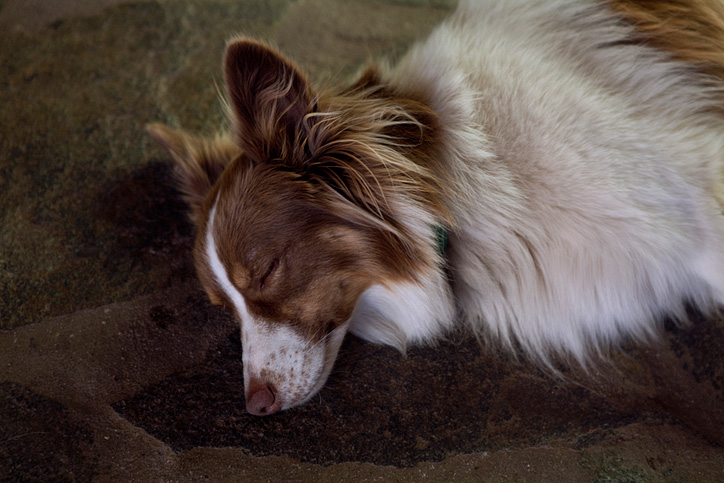 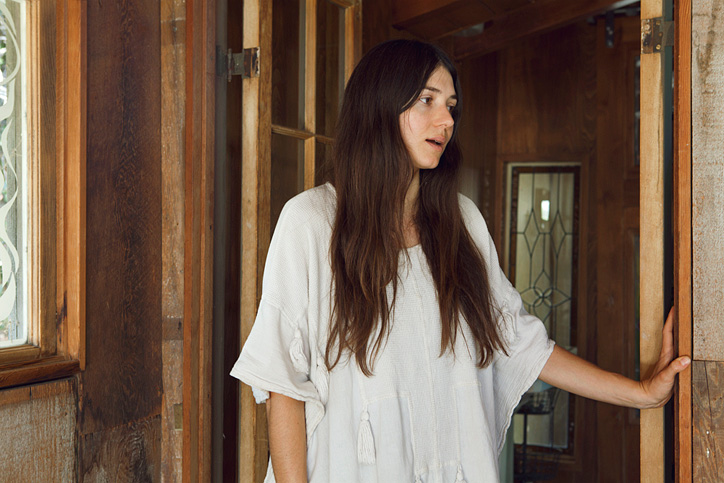