The Biennale’s title, A Goodbye Letter, A Love Call, A Wake-Up Song, is a jumbled combination of phrases, inviting us to rethink how order enforces meaning-making. Linear and nonlinear, and lasting from 5 minutes to 365 days, the show convinces us that time eschews definition. By encouraging viewers to connect the dots, the biennale is an ode to Switzerland’s neutrality, from warfare, to economics, to art. Postponed from 2020, the 2021 Biennale de l'Image en Mouvement showcases nineteen local and international emerging and established artists across three sites, at Centre d’Art Contemporain Genève and Léman Express train stations until January 30, 2022.
Curated by Andrea Bellini, Director of Centre d’Art Contemporain Genève, and DIS, a New York-based collective (who also participate in the exhibition), there is a notable shift from previous editions, including a reduced number of artists, many of which have collaborated in the past. In this context, the slightly misleading press release hinges on the production of 'entirely new and original' commissions, yet the films by artists Camille Henrot and Akeem Smith were exhibited priorly. In addition, too much autonomy – no overarching concept, no artist/curator boundaries, no informative wall texts, no corridor lighting, no notions of the work’s starting or ending – can be disorienting. Upon entering the separate booths, isolated works, both acted and animated, encourage intimacy and demand attention.

Set in Lake Geneva, the witty Illuminati Detectives (2021) film by New York-based filmmakers Emily Allan and Leah Hennessey pays tribute to Switzerland’s obscured history of the patriarchal predication of witches. Inspired by the Romantic-era, it recounts the story of 19th-century poets Lord Byron and Percy Shelley who, as secret agents (in their spare time amid consuming opium and indulging in incest), discover the female that turns men to stone using her sorcery. Despite demystifying the paranormal, the piece was devised at CERN, the Geneva-based scientific institution. Concealing their American accents with a recreated Britishness, and cross-acting as their male characters, the duo’s otherness is only made more palpable.
Geneva-based artist Giulia Essyad’s Bluebot: Awakening (2021) is a self-proclaimed ‘porous’ video combining medieval and sci-fi aesthetics. Located in the Centre and at the Chêne-Bourg train station, the artist touches on dystopia and identity. Stations are often filled with adverts praising a certain physique, (in Essyad’s words, “a visual warfare”) here, instead, transistors are called to focus on a 9-minute looping artwork. By displaying her bodily work publicly, Essyad centres it as a collective space, while the journeying trains’ vibrations heighten the work’s dramatism. The story’s premise is a post-apocalyptic, AI-assisted future where telepathic robots can’t be turned off. The disjointed protagonist, whose fabricated blue flesh is a reminder of otherness alluding to colonial violence, wakes up traumatised by her entrapment in a misshapen vessel. To access the 27-minute cinema room at the Centre, you pass by a series of box office-style cutouts of her main figures. Inside, her lead is no lifeless robot – narrating in first person, she experiences existential dread; “I never asked to be made,” she proclaims.

Synergising with AI technology is the site-defining Daily Dense Dance Desiderio (DDDD) (2021) by Berlin-based artist Riccardo Benassi. Made of compressed images, sounds and texts, the imposing LED-wall unfolds for 365 days in the Geneva-Champel station. Bouncing off its liminal surroundings, the piece pertains to the search for “synchronicity with other bodies” according to the artist. Simulating himself to the machine, Benassi wrote sentences that the GPT-3 completed in a participatory process of pushing towards presence. The pulsing green flashes underline the paradox of digital progress being liberating and controlling at once. The soundtrack overlays organic and inorganic noise (inclusive of a howl to the moon) distorted to the point of unrecognisability. Reflective of Geneva’s linguistic diversity, the work introduces sentences in English, French, German and Italian daily, but nuances are lost in their translation.
New York and Berlin-based artists Hannah Black, Juliana Huxtable and And Or Forever’s Penumbra (2021) video, initially conceived as a performance, examines language as the core signifier that separates animal from human. Meditating on extinction, it takes place in a courtroom where a prosecutor, acted by Black, and a defendant, acted by Huxtable, argue over a pangolin’s guilt (or lack thereof). The endangered mammal, not only believed to be the world’s most trafficked species, but also blamed for Covid-19’s outbreak, is charged with cannibalism (yet it feeds off insects), being repulsive, and murdering everything in its sight. Reminding us that our treatment of animals as companions, comestibles or contaminants is perilously thin, this 33-minute trial, which I watched on a jury bench, puts the entirety of humanity on the stand.

Expounding on the co-dependent relationships between humans and bacteria are Paris and Copenhagen-based artists Will Benedict and Steffen Jørgensen. Their 40-minute The Restaurant, Season 2 (2021) video claims that the countless organisms inside us make us “more bacteria, fungi and viruses” than humanoids. After spending the past year hyper aware of germs, hearing that the ‘dirt’ is an intrinsic part of us, feels utterly discomforting. With film stills of the work plastered throughout the Centre, it was emphasised as this year’s undisputed highlight. Set in an alternate reality where uncanny eateries serve as interview zones, the artists prove superb spatial awareness by transforming their booth into an interrogation room itself.

Each work proposes counter-myths as a form of resistance to the current climate. During the past years of enclosure, we have become used to watching alone, but has that affected our ability to watch with others? Can we disengage from our attachment to historically imposed storylines? Without a straight chronology, are we really able to define who we are? 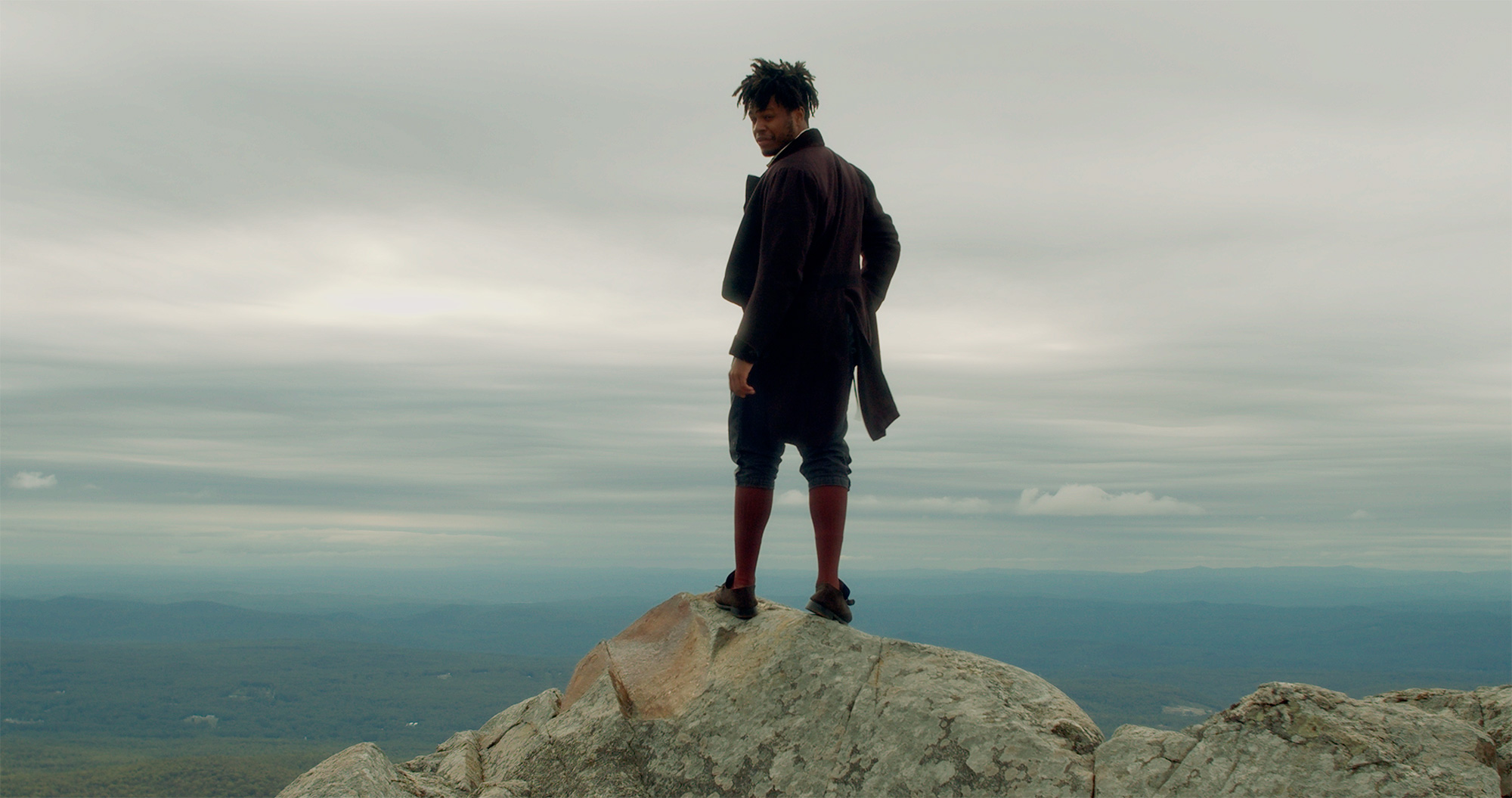 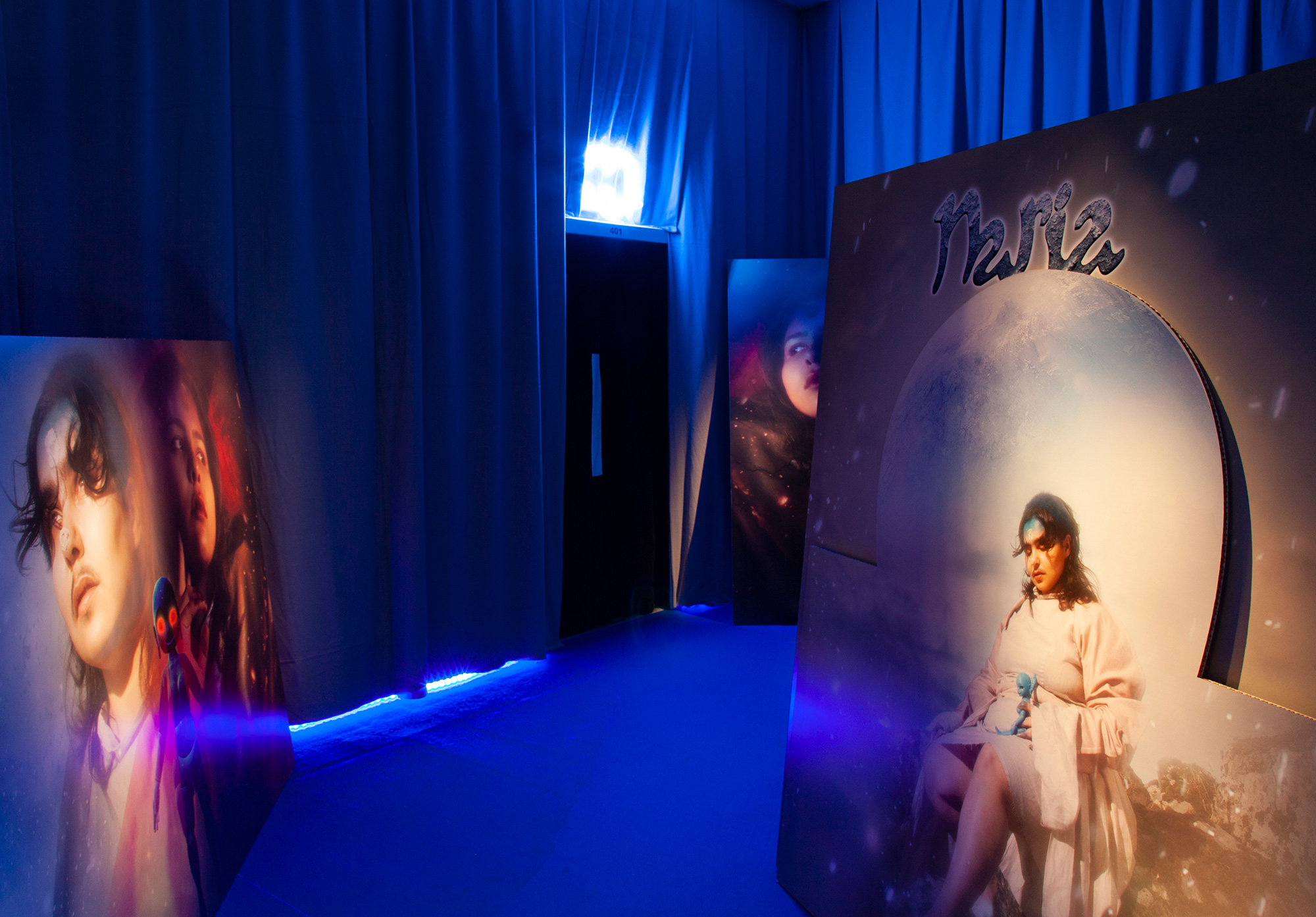 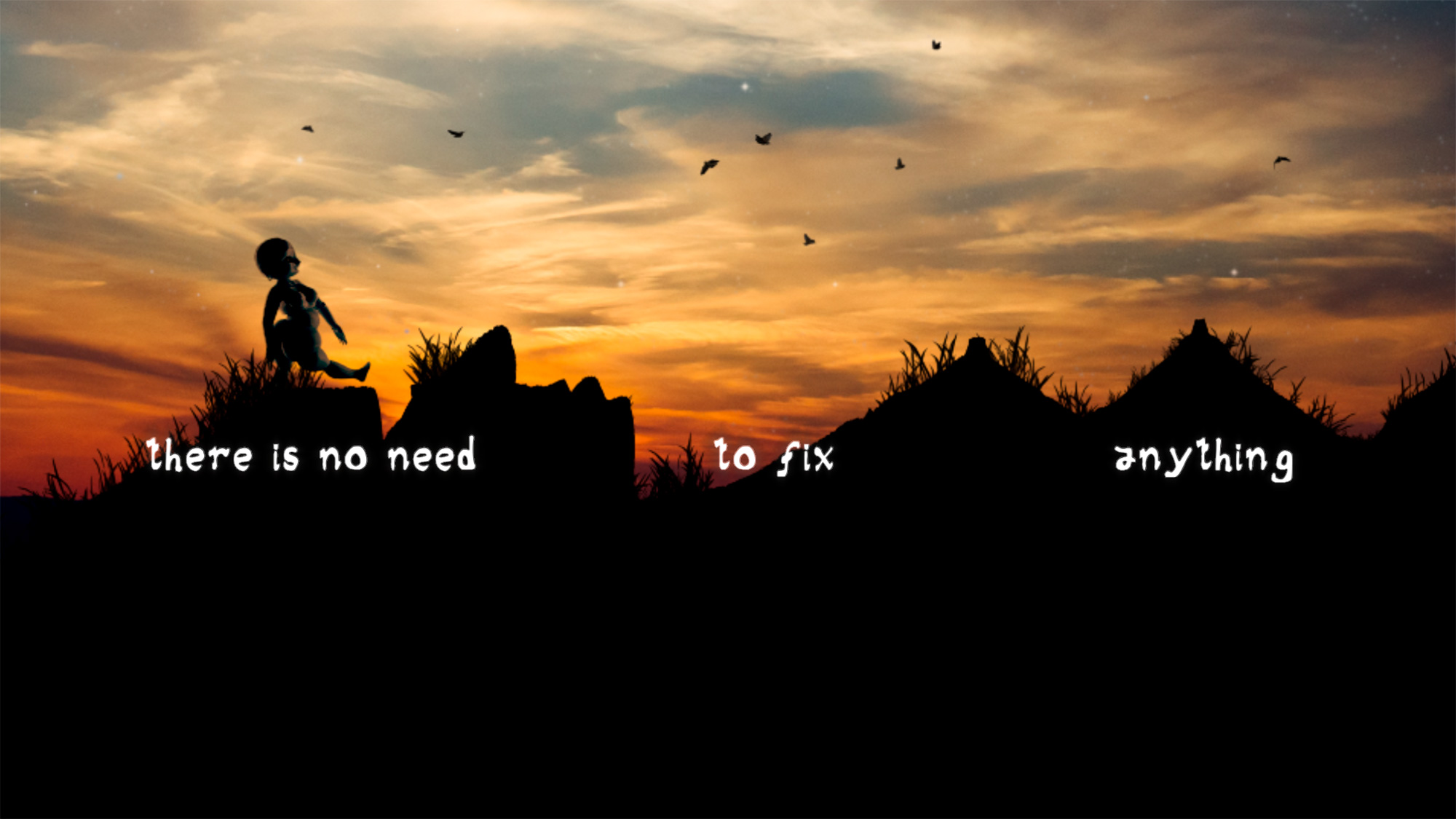 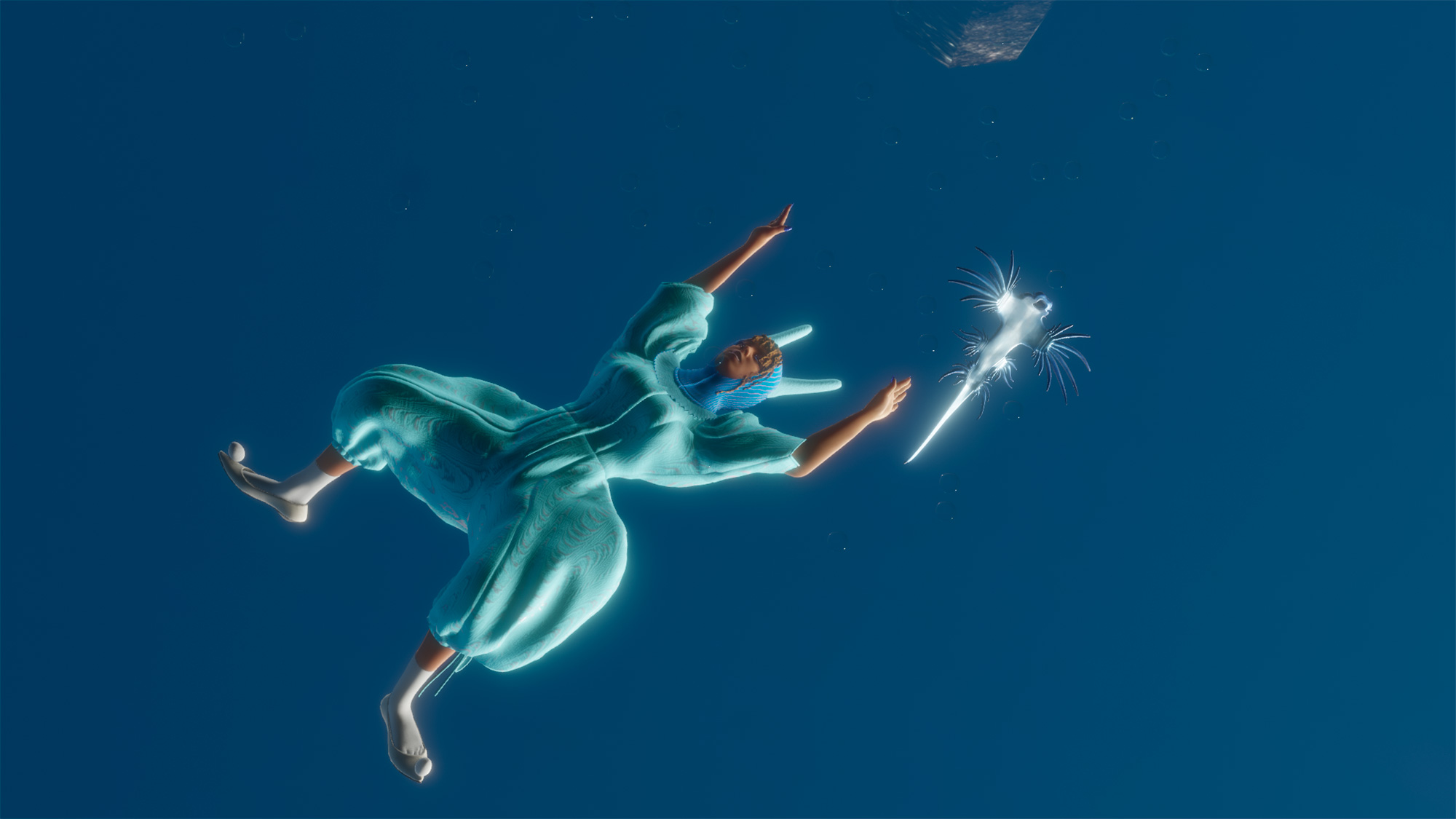 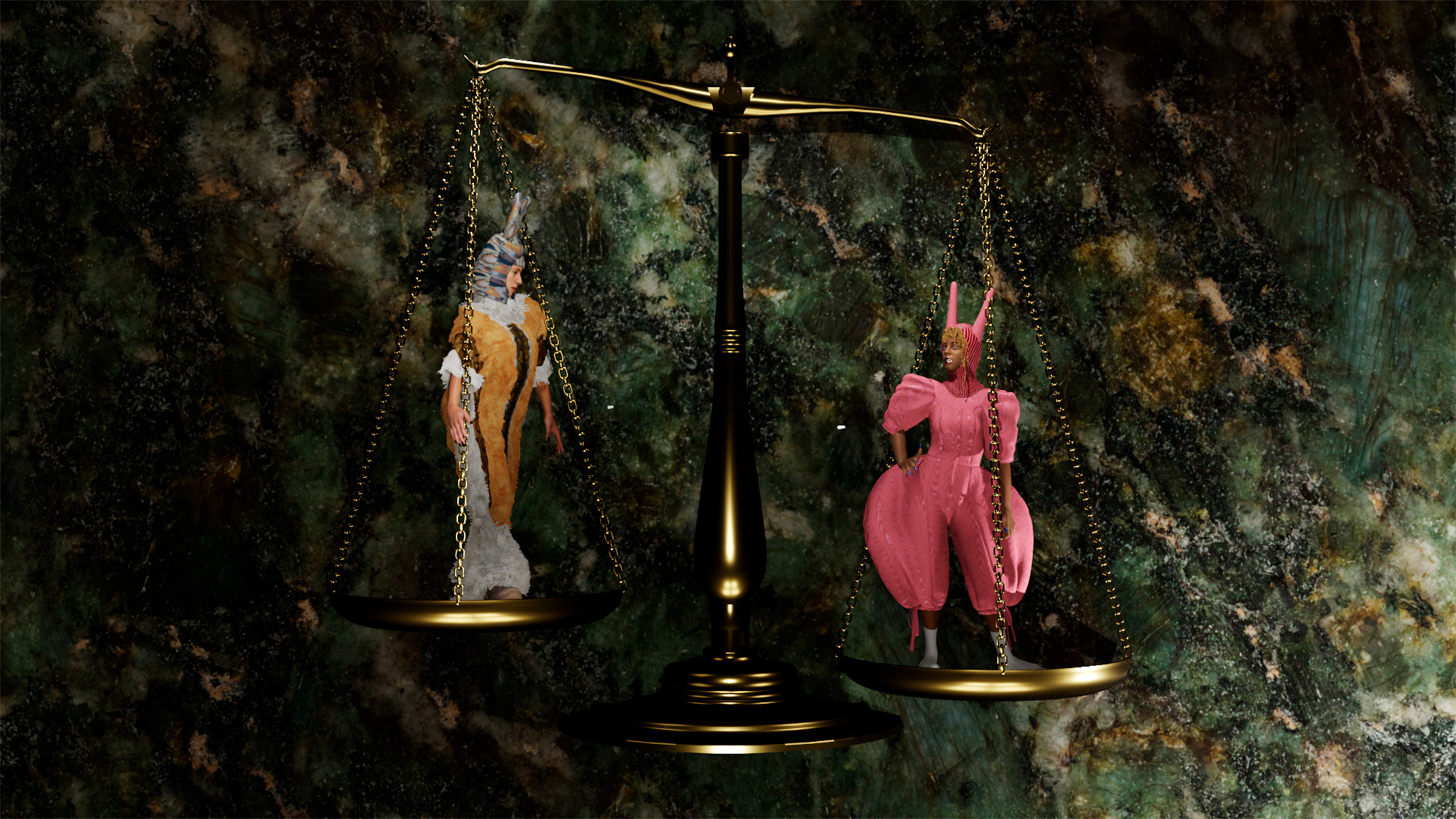 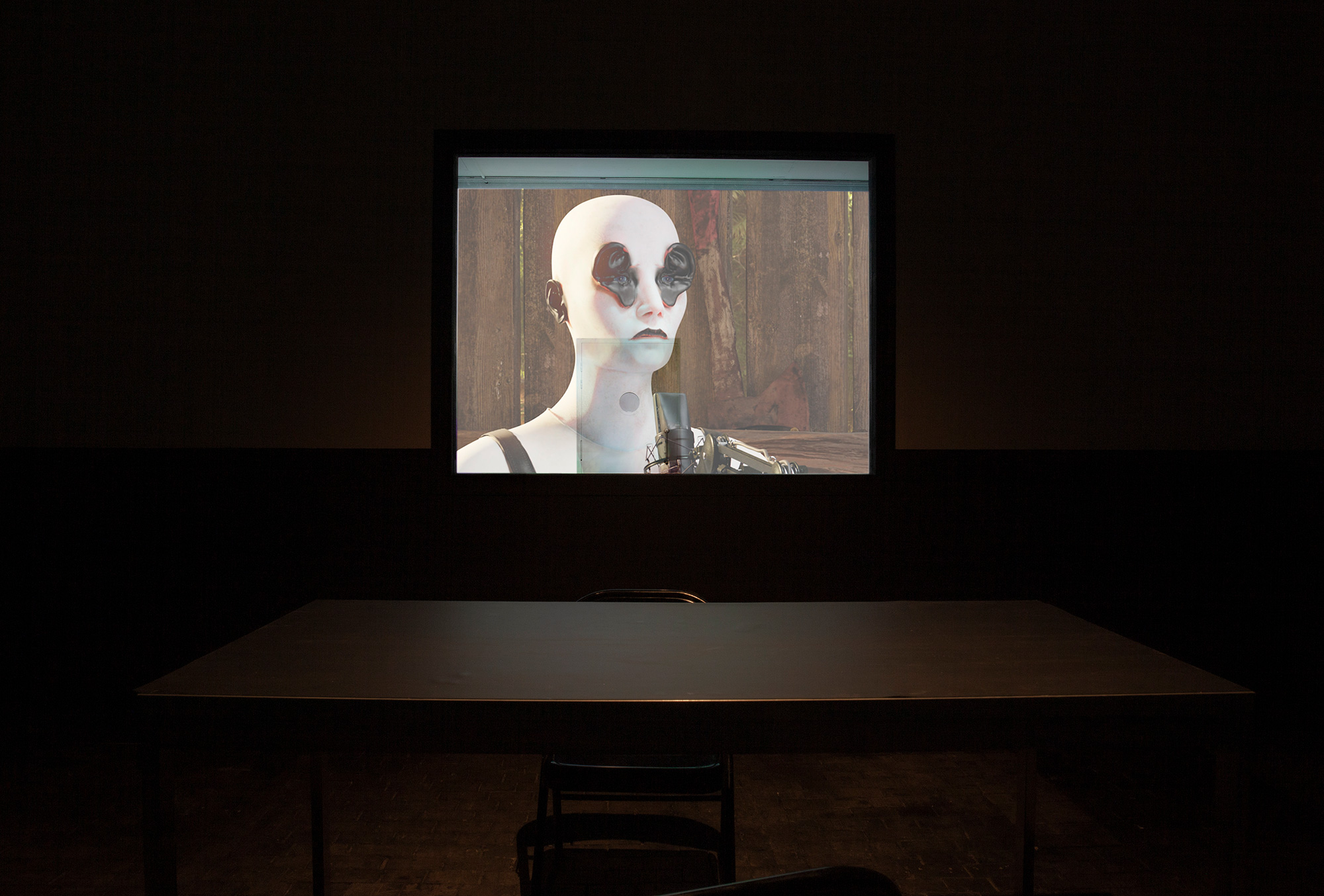 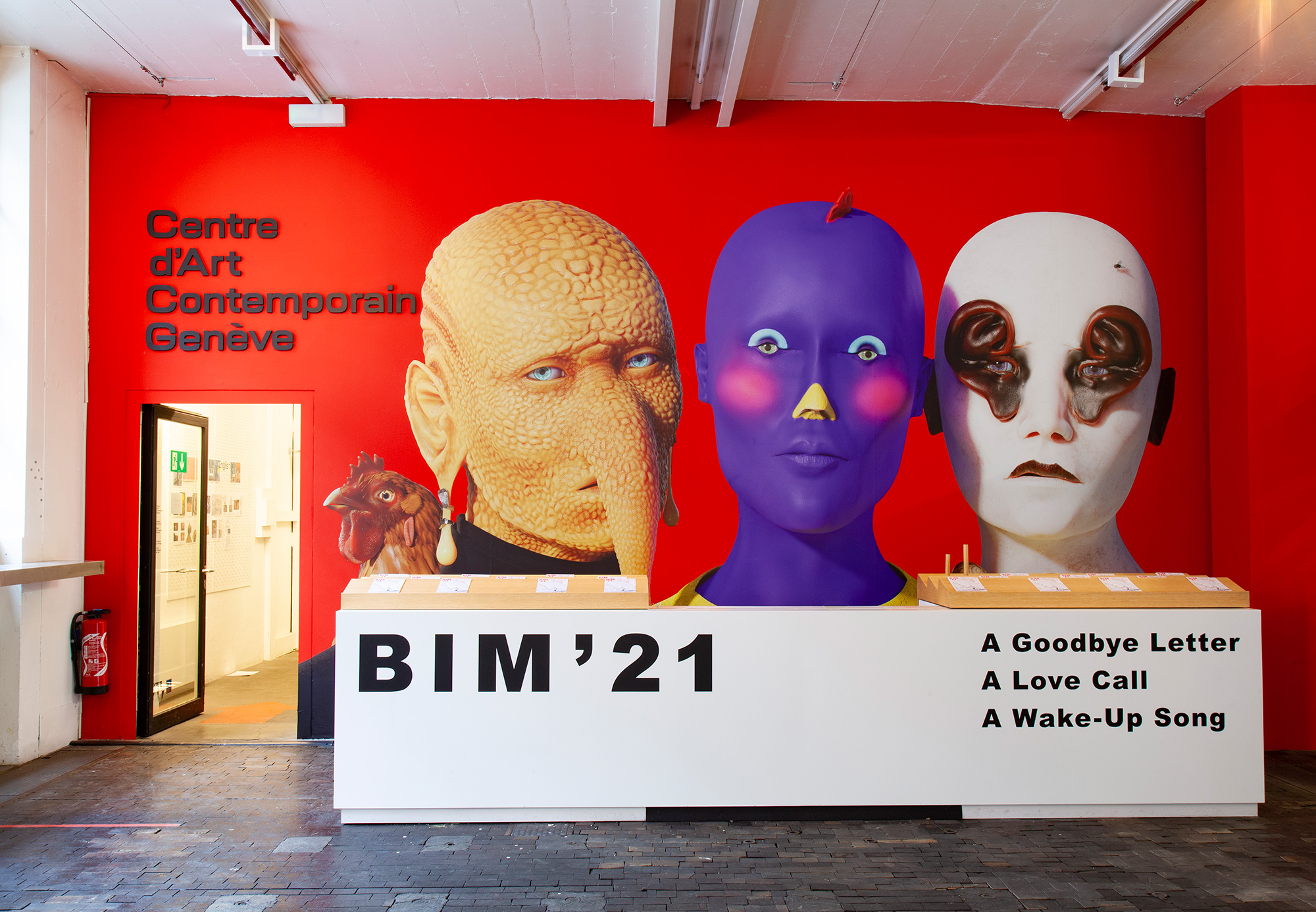 Wallpaper by Will Benedict & Steffen Jørgensen. Courtesy of the artists and Centre d’Art Contemporain Genève.