Fashion is the danger 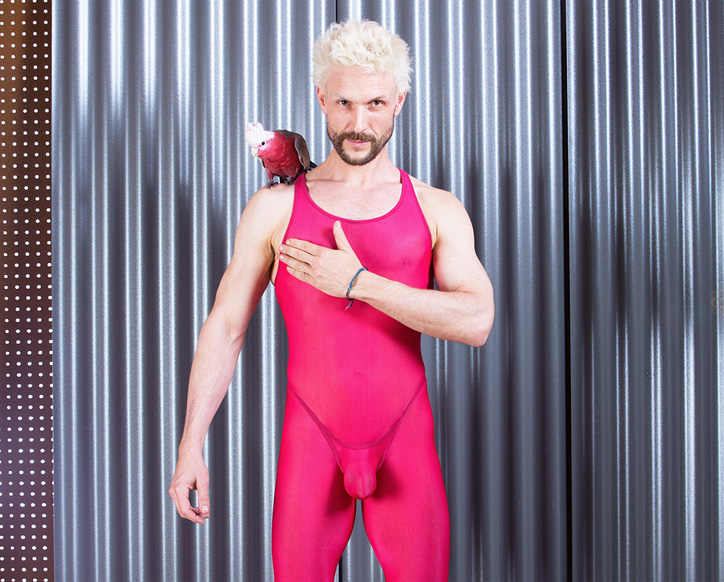 It says a lot for the Royal Academy of Fine Arts—Antwerp alumni like Bernhard Willhelm and Jutta Kraus to relocate from Paris to the sunny side of Los Angeles. The diverse complex issues they’ve been exploring since the inception of his eponymous label in 1999 are still prevailing in this L.A. introduction: the mass consumerism and uniformity of culture, fashion, and art in the 21st century and beyond. You see, this is the pair’s very first American museum exhibition, entitled “Bernhard Willhelm 3000: When Fashion Shows The Danger Then Fashion Is The Danger”, which explores their post-apocalyptic view of society and fashion, reflecting the diversity of the global metropolis.

And it makes perfect sense since L.A. is considered to be one of the United States’ stereotypically superficial, fake, and hyperactive kingdoms of consumerism. And what the duo is showing us, is as Willhelm cites “the freedom of the fool” and it’s source of irreverence. Willhelm states “the clown has always been a very special person to me—he was always the one who was allowed to say the truth to the king. Of course, to find the truth, you need to say hi to your haters and bye to conventions.” And what better place to spit in the face of a king than the kingdom of the superficial, fake, and mass consumerism that fashion always tends to falter in?

As Willhelm meditates and moves “in-between chaos and diversity” via video, sculpture, photography, and objects that display his ironic, self-referential and poignant attitudes, he shows us his idiosyncrasy and eclecticism through his assemblages of Middle Eastern, Indian, and African drapery and garments. His punk aesthetic moves to perfectly-designed and ordered products that create and perpetuate the constant hysteria to buy. A mix of their thoughts and desires, dreams and nightmares, well-fitting for a William Gibson book. He brings together the purpose and pointlessness of war, consumerism, worship, and child-like frenzy into a seamless fever dream that never stops to blink.

This allows us to view his outspoken, unbashful, and colorful visual language and themes from it’s evolution from one arena of spectacle to the other. And in this case, they’re jumping from the frying pan and into the fire.

You can view their Fall / Winter 2015-16 collection at the Museum of Contemporary Art in the Pacific Design Center in West Hollywood until May 17th. The forthcoming spring-summer collection will also be unveiled as part of the installation and further positions the concept of diversity as a response to climate change and ecological disaster. 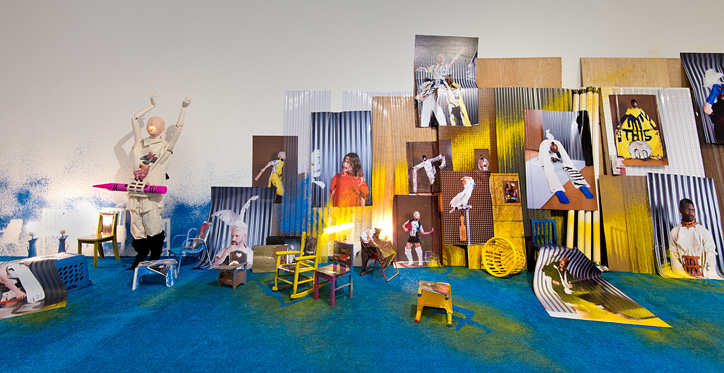 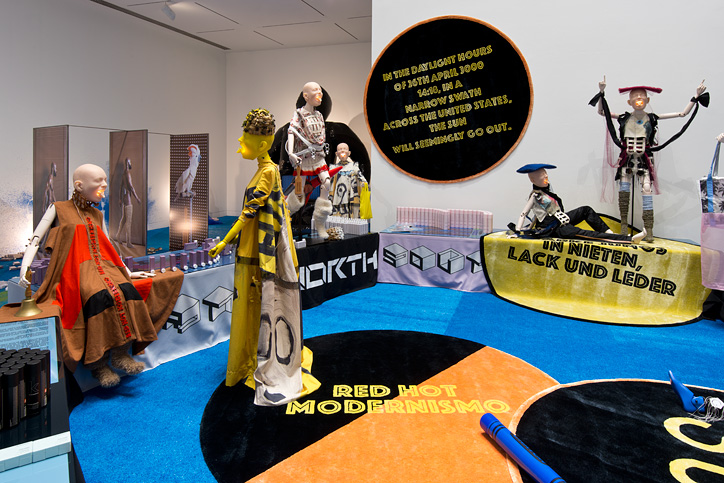 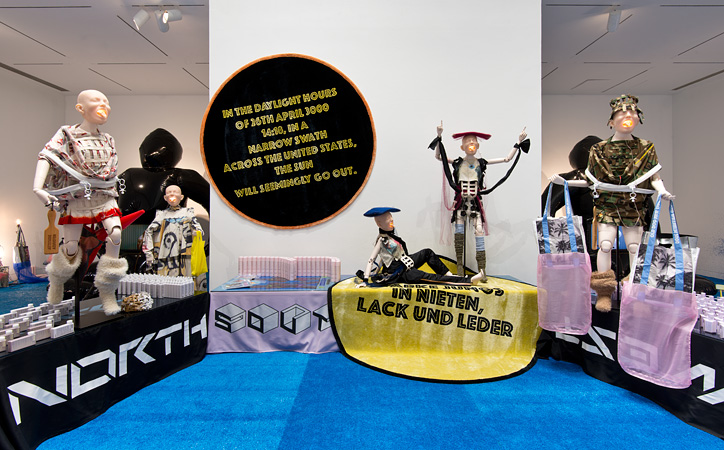 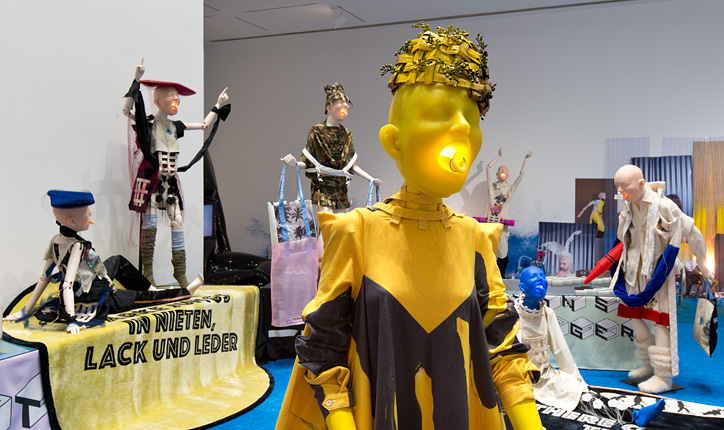 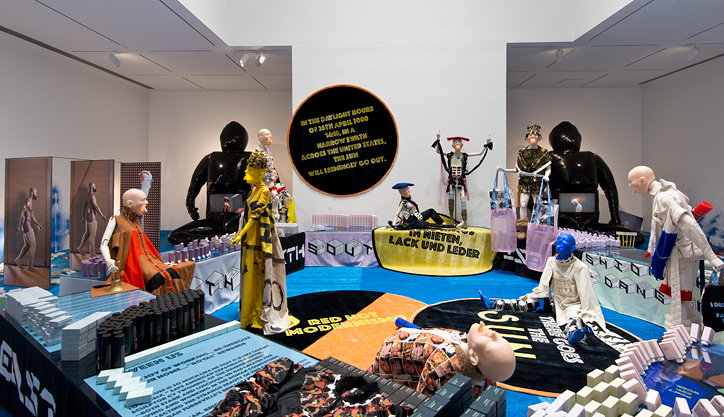 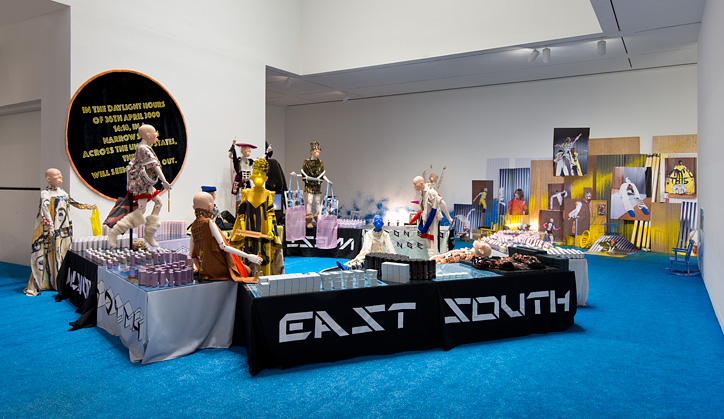 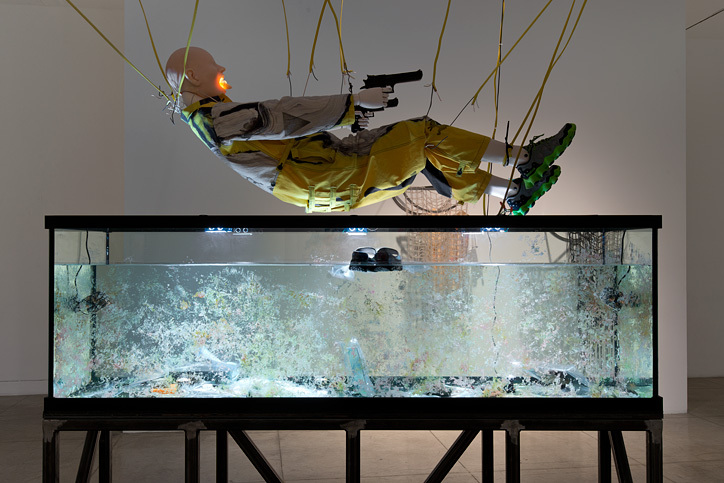 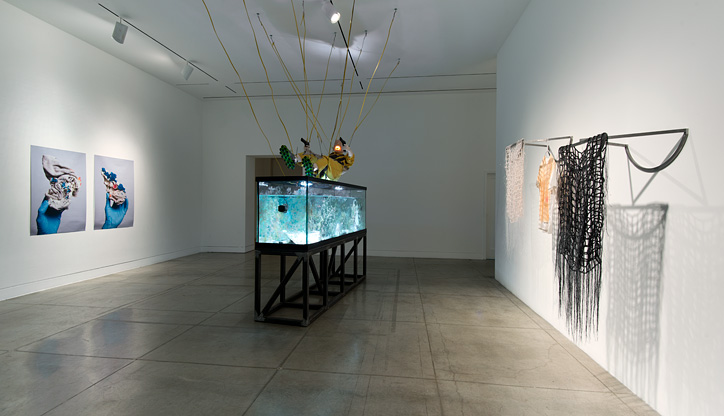