Three highlights that you can still visit 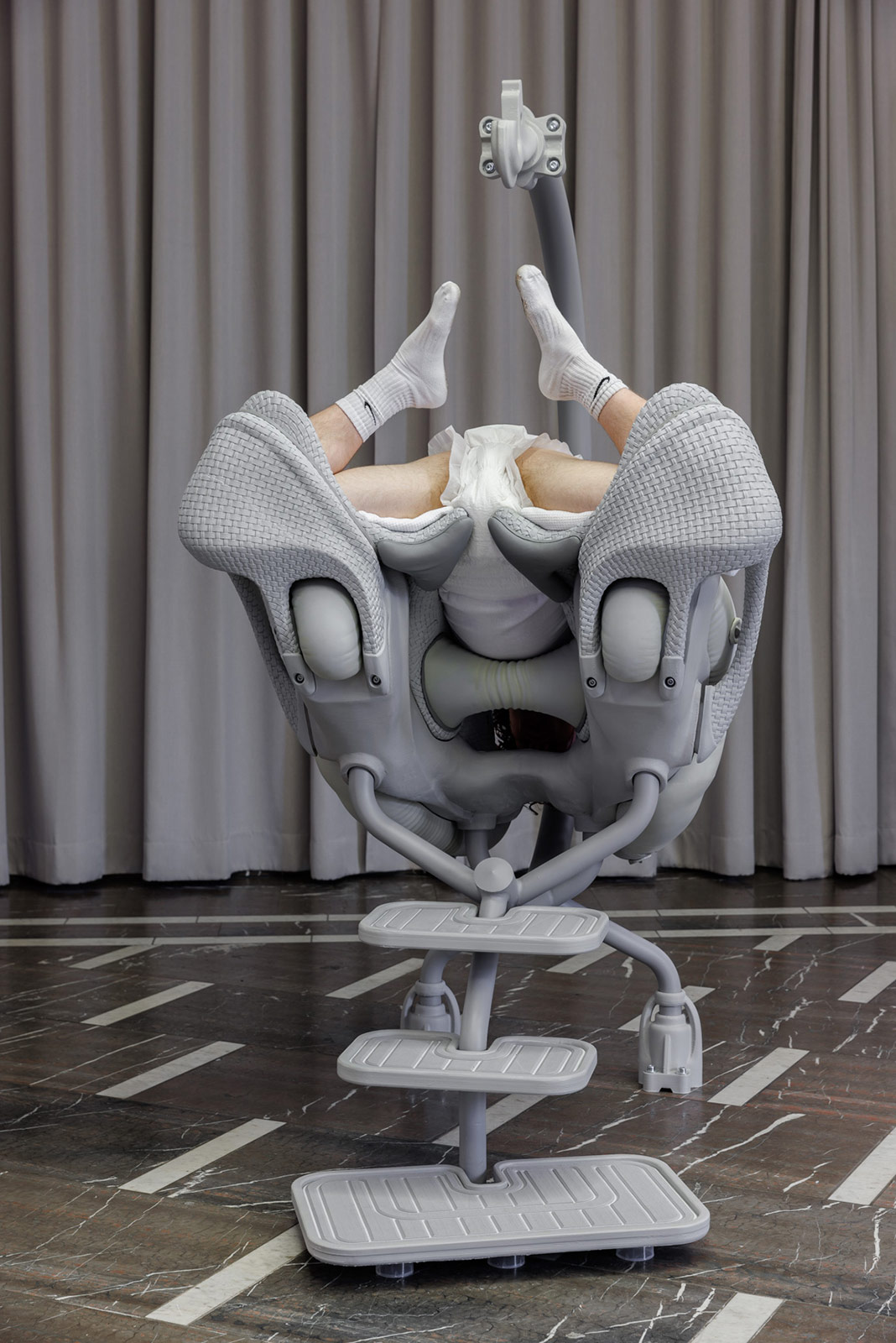 The eleventh edition of the celebrated Berlin Art Week took place from September 14 to 18. Collectors, enthusiasts, institutions and the curious from all over the world came to experience a hectic and mind-blowing agenda. Fortunately, however, many of the exhibits on show will remain open until the end of the year and beginning of next one. Here, three highlights that you really can't miss now.

Jon Rafman (1981) is a Montreal and Los Angeles-based artist and filmmaker. He is known for his multi-media practice encompassing video, animation, photography, sculpture, and installation. Rafman explores subjects of fantasy, world-building, online subcultures, and virtual worlds. Taking inspiration from the web's darker fringes, he explores the influence of the internet and its effects on our human psyche in the dual sense of community and alienation it exacerbates.

In this opportunity, Jon Rafman takes over the Schinkel Pavillon's Klause with Egregores & Grimoires presenting four visual works from 2021 and 2022. The exhibition title derives from the language of Magick by Aleister Crowley, where a Grimoire is a spell-book, and Egregore is an Occult concept representing a non-physical entity arriving from the collective unconscious that has taken on a life of its own.

In Punctured Sky (2021), the visitor follows a former gamer on an unsettling journey through uncanny environments in search of an old computer game that has seemingly disappeared from history without a trace. The film resembles a so called Creepypasta, a horror-related legend, modified, copied, and pasted across the web with vague or anonymous origins. Punctured Sky touches on questions of interpersonal relationships, the twists and turns of one's memory, and the dynamic psychology of the isolated, atomized individual.

Rafman's 2021 video-triptych Egregore, until now primarily shared over social media, shows a collection of carefully curated found photographs that the artist has animated. The ‘cursed’ images merge and transform in cacophonous permutations. With Egregore, Rafman gives form to chaos, excavating the collective unconscious of the web and its users, as well as the ubiquitous human desire to search for meaning. Egregore exemplifies a methodology of world-building. Meta-narratives and lore develop and morph out of Rafman's vast archive of internet detritus.

The film Minor Daemon Vol. I (2022) tells the story of the intersecting lives and fortunes of two young men – Billy and Minor Daemon – set in a surreal virtual dystopia, a distorted carnival mirror of our world. Billy (a pampered prep school boy) and Minor Daemon (abandoned at birth and raised in a child labor camp) share an extraordinary gift for virtual reality gaming. We follow their Dantean journey through incarceration where their shared talent could secure their freedom. 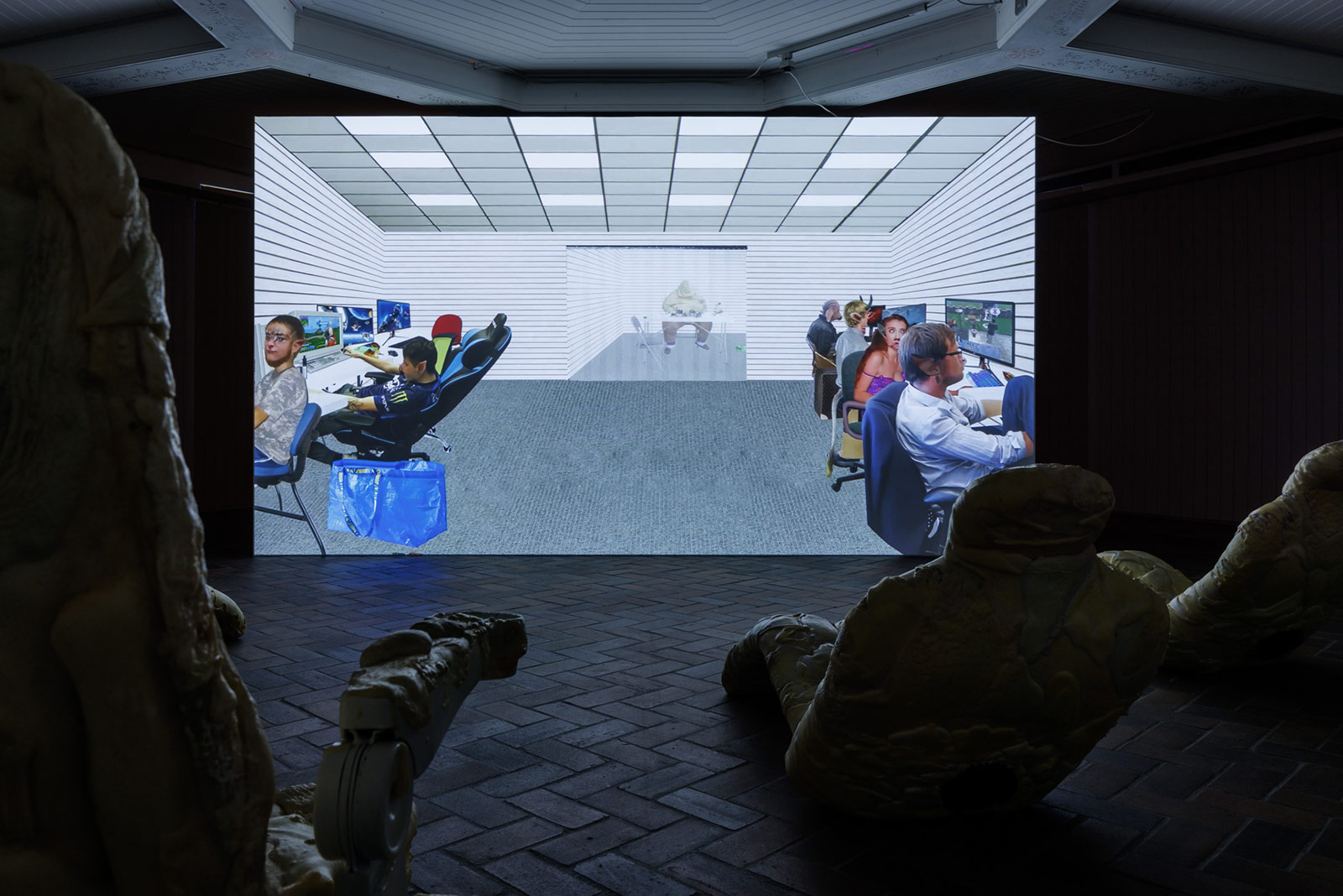 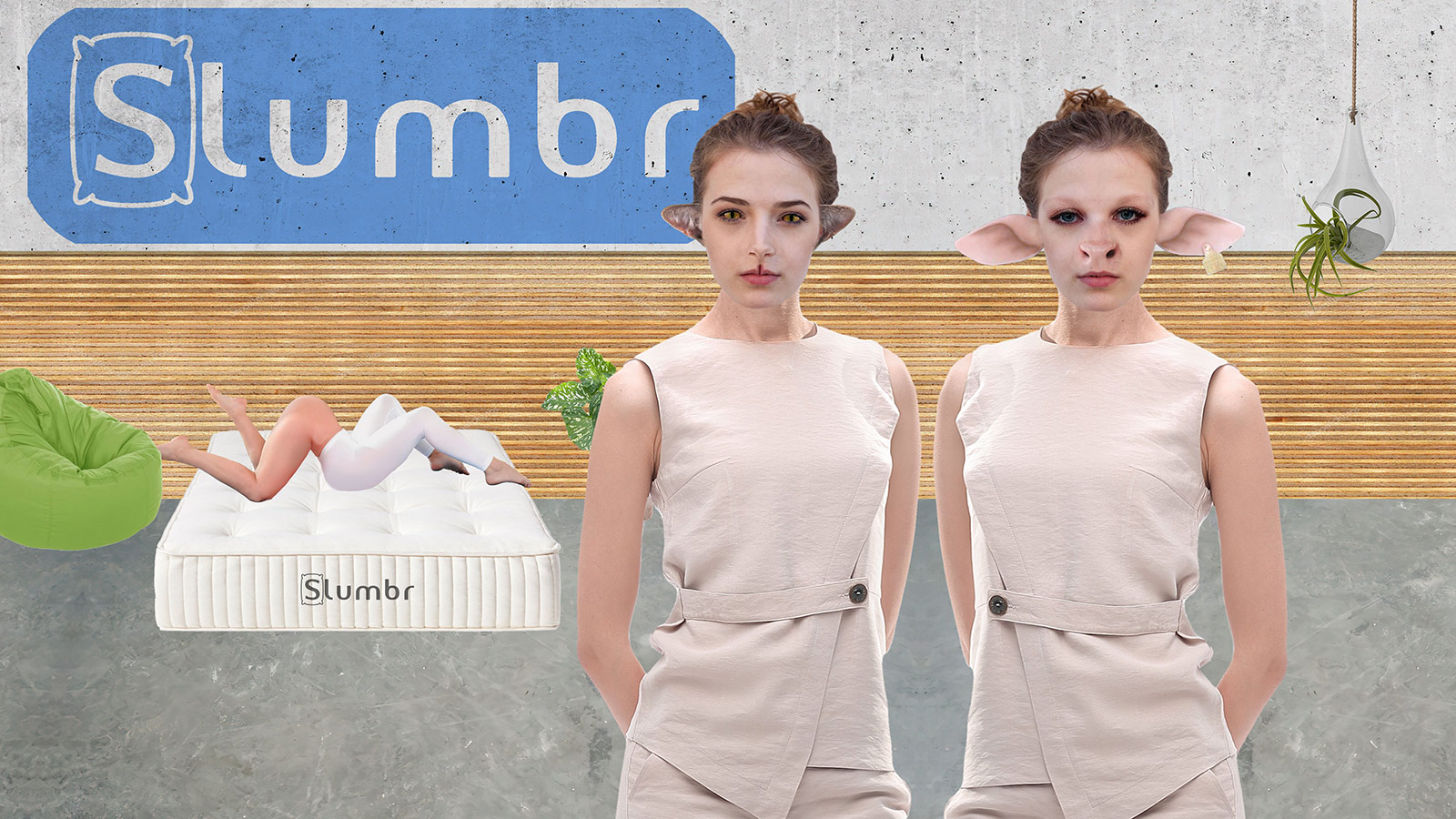 A young man looks gracefully at the camera, his head slightly turned, delicate rouge shimmering on his high cheekbones, lips painted a seductive red, and light blue eye shadow glistening on his eyelids. In this half-portrait, his pink-lacquered fingers touch his right cheek, and a ring features prominently on his pinkie. Is this actually the likeness of a woman? Are we able to determine a person’s identity simply by reading gender-specific visual codes?

C/O examines the representation of identity, gender, and sexuality in photography in three complementary exhibitions entitled Queerness in Photography, ranging from historical image material that shows the act of photographing as a way to find one’s identity, a documentation of a safe space that is unique in the history of photography, to contemporary forms of expressing gender fluidity, all of which bring up the question of whether socially constructed genders are even topical today.

The three exhibitions reveal a complex panorama and show that photography can also be an act of liberation and self-empowerment. By visualising one’s own identity or documenting the common solidarity in the queer community, new forms of artistic representation are created.

In the exhibition Under Cover. A Secret History of Cross-Dressers, a collection of amateur photographs that French director and filmmaker Sébastien Lifshitz has amassed over several decades is presented. Since the 1860s people used the medium of photography to question and challenge their assigned gender identity based on clothing or physical traits. Without knowledge of the particular genesis or personal motivation of the individual photographs, these depictions clearly express the wish of the people portrayed to explore themselves before the camera: in addition to the rebellion against imposed social expectations and political regulations they become aware of their own identity in the photographic self-portraits.

Casa Susanna, Cindy Sherman’s collection presents original photographs from the of the same name, which was a safe space for cross-dressers and trans women in Hunter, New York, in the 1950s and 1960s. Within this small community, members could together explore their identities at a time when lifestyles, sexuality, and gender deviating from heteronormative expectations and conventions were stigmatised and even prosecuted. The act of photographing within this community was socially volatile, since the members were documenting something that was not allowed at the time: a life out- side of socially constructed gender roles as well as personal growth that was based on an individual’s own needs.

In 1992 Tilda Swinton played the gender-nonconforming lead role in Sally Potter’s award-winning film Orlando, which was based on the eponymous novel written by Virginia Woolf in 1928. Woolf’s novel tells the story of a young aristocrat who lives for centuries. Without aging, the character in the novel is also able to mysteriously change his gender.

The works in Orlando, curated by Tilda Swinton, some of which were created especially for the show, present various perspectives on questions of identity, gender, origin, and sexuality. Through the diversity of artistic approaches and perspectives, common concepts, forms of representation, and power relations are broken. Through the choice of the artists, their artistic new interpretation of the topics, and the identity-bestowing construction of new narratives, generally marginalized or underrepresented views are given a stage. The visual reflection of human existence in its diversity is at the same time an inspiring call for impartiality, empathy, and tolerance in contemporary art photography. 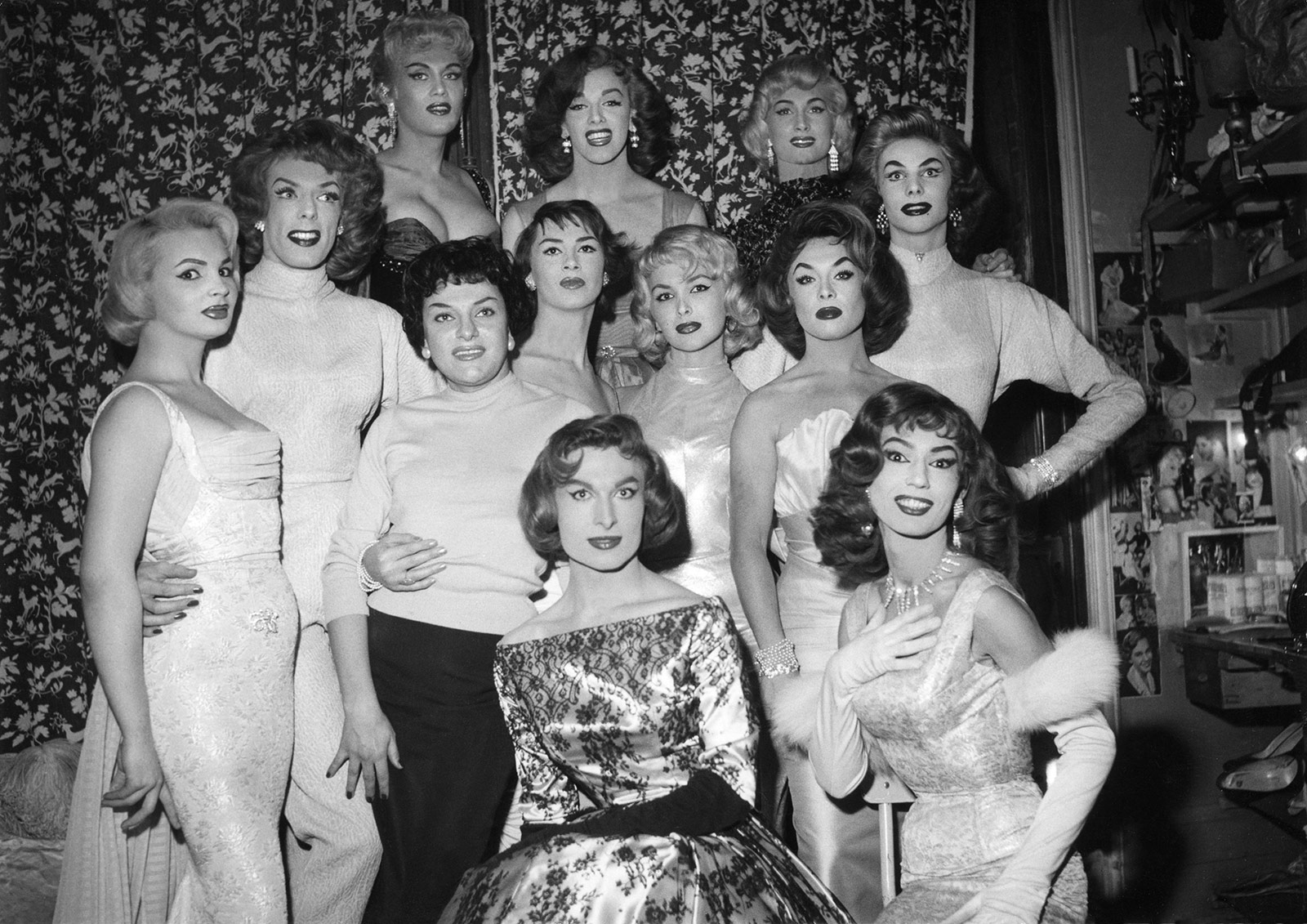 Anonymous, Bambi and the Cross-Dressers Band of The Carrousel of Paris, 1958 - Sébastien Lifshitz Collection

Fake-Estate by Anna Uddenberg (Until December 31)
With Fake- Estate, Schinkel Pavillon presents the first institutional solo exhibition by Swedish artist Anna Uddenberg (1982) in Berlin. Uddenberg has developed a new series of ‘usable’ sculptures for the glassed exhibition space on the upper floor, which are loosely arranged in the room. Occasionally a group of baby-esque performers activate the ergonomic sculptures by posing in and around them. The addition of performance extends Uddenberg’s work along her artistic research of how objects, through their function, gain control over the subjects who use them.

In an endless feedback loop, the reference point between sculpture and performer oscillates from ‘using’ to ‘being used,’ between dominating and subjugating. Based on masochistic practices in which the body is willingly released for humiliation, Fake-Estate provokes moments of collision around questions of ownership, thereby negotiating the boundaries between free-will and control. Who owns our bodies, our minds, our data? The performers’ poses, executed as a state of mindless flow, become representative of our behaviour, in which we hand over control to user-friendly technologies, algorithms and targeted advertising on a daily basis. The performers’ outfits are inspired by the kink subculture practice of Paraphilic infantilism (adult baby syndrome) – testifying to a desire to return to a submissive, childlike state.

The artist’s new multimedia work symbolically and materially quotes the immediate surroundings of Schinkel Pavillon. The historicising facade buildings, rapidly constructed in recent years and criticized as ‘fake history’ – including Berlin’s city palace that reproduces the 19th century – have transformed the area of Berlin’s southern Museum Island into a stage-like backdrop.

The eclectically arranged buildings, most of which are used as investment properties, create a supposedly romanticised image of Berlin that hardly bears any relation to the socio-economic reality of the city. The sculptures, whose surfaces produced in a 3D printing process imitate materials of these facades - brushed stainless steel, rattan, ‘’skins or veneer – in this way themselves become ‘fake’ of their own materiality. The view from Fake- Estate thus becomes a unique stage for Anna Uddenberg's exhibition in which the performers give up their ultimate ‘’assets their bodily autonomy and, eventually, their ‘self.’ 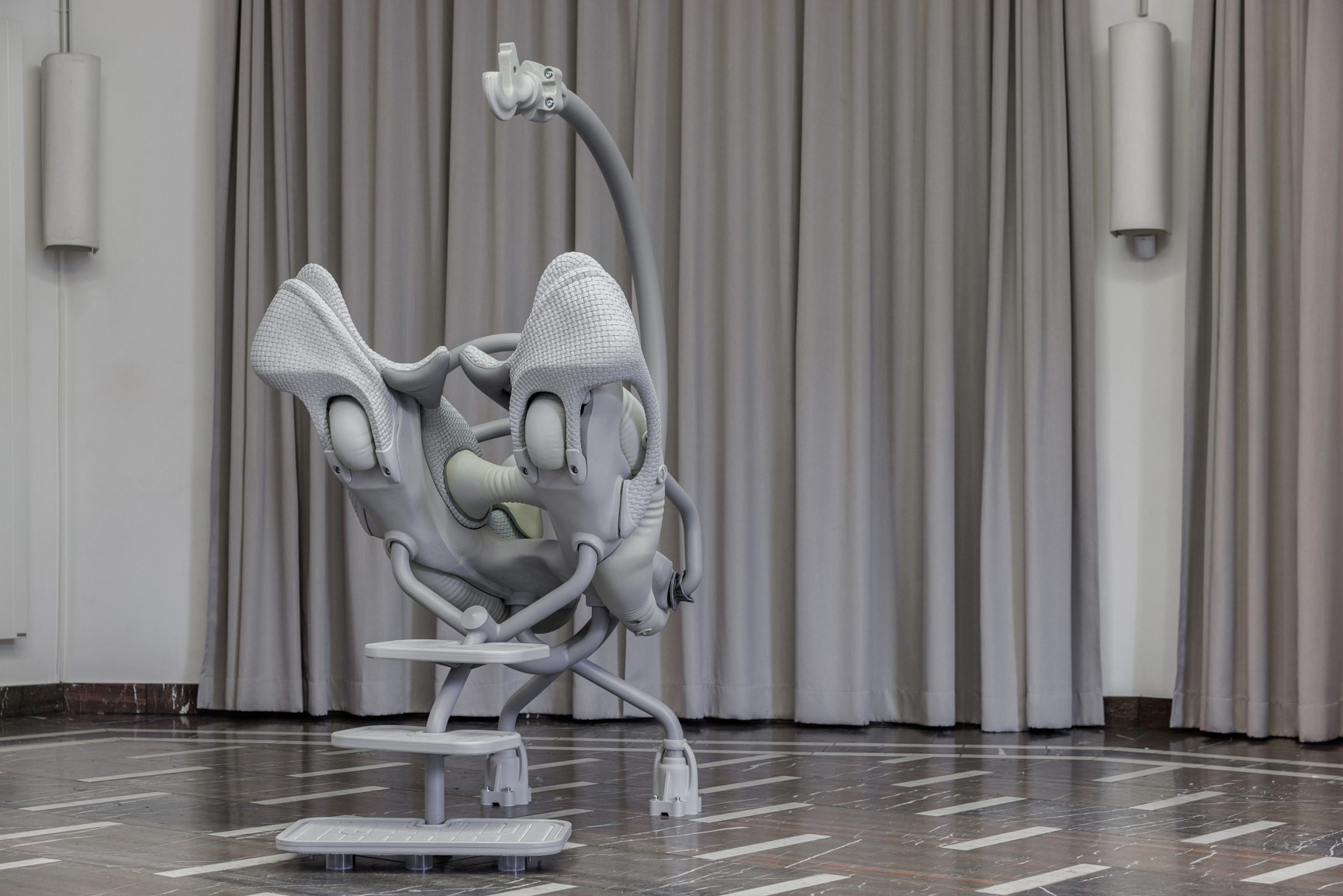