Emerging Italian talent at its best 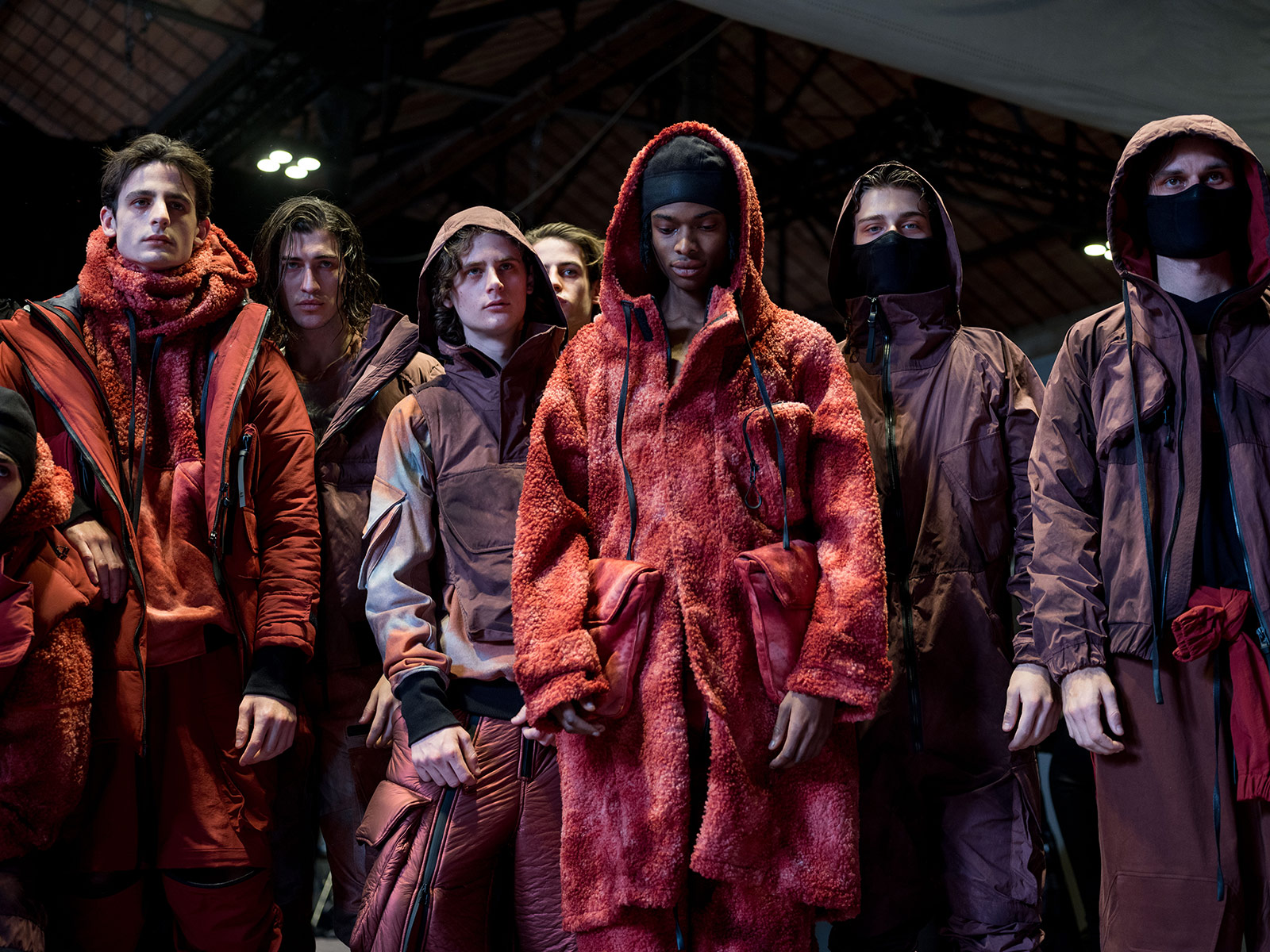 Moving from Pratibus District to the bigger venue of Ex Caserna Guido Remi, Altaroma has celebrated the Fall/Winter 2020 edition, whose focus is “on the widening of the scope to sustain emerging talents and the values of Made in Italy.” With special attention to sustainability and technology, the new edition has introduced dozens of brands to buyers, press and the general public from January 23 to 26. We’ve been there and tell you all about it.
After a few editions repositioning itself as a scouting platform to discover, mentor and help young talents and emerging designers – for example, with the Who’s On Next? contest in collaboration with Vogue Italia –, Altaroma is finding a path to stick to. And it seems pretty successful so far. “Today, Altaroma acts in fact as an incubator, creating through its projects a virtuous circle aimed at the discovery and promotion of new talents of Made in Italy”, states Silvia Venturini Fendi.

“We are more and more perceived as a reference point and as a concrete opportunity of visibility for many young designers and, in many cases, we represent a door of access to the world of work and the market, especially for young creatives coming from centre-south Italy”, she continues. “In the last three years Altaroma, refining its role, has also managed to give more effectively its contribution, introducing new lymph in the Italian fashion system, optimizing the synergies with Florence and Milan”, Ms Fendi concludes.

There are indeed interesting talents to discover at Altaroma. The Showcase section, which has presented a total of fifty-six designers and brands ranging from ready-to-wear to shoes, to eyewear, bags and jewellery, had some brands worth highlighting. Like Vanadio23, founded by Andrea Semeghini. The chemistry-inspired brand – it’s named after vanadium, a chemical element with the atomic number 23 – is strong on prints, which Andrea prints digitally from his hand-made watercolour paintings, often depicting orgies or large groups of naked people. The Fall/Winter 2020 collection he was presenting now was inspired by the Garden of Eden and included prints of lustrous flowers, coiled up snakes and even child-like drawings of penises. Playful and irreverent, but also beautiful and wearable.

However, it was the fashion shows that stood out the most. From last edition’s Who’s On Next? contest, we saw some of their finalists – and winner, of course –: Federico Cina, Jing Yu, Hibourama, Iuri, Maiorano, Nahiot Hernandez and Twins Florence. Federico Cina, whom we interviewed a couple of years ago and already presented him as a ‘one to watch’, presented his collection after winning, last July, the renowned prize that has helped previous winners like Nicholas Kirkwood or Massimo Giorgetti (from MSGM) become international household names.

Cina has presented I bei tempi (translated as ‘beautiful times’), inspired by his home region, the Romagna, as well as Vittorio Tonelli, a master and writer specialized in the Italian area. Backstage, he explained that the collection speaks about his traditions and past times, like the 1950s, when his grandparents were growing up. “They didn’t have social media, internet or money, but they were very happy. Now, we have everything, but we’re never happy.” 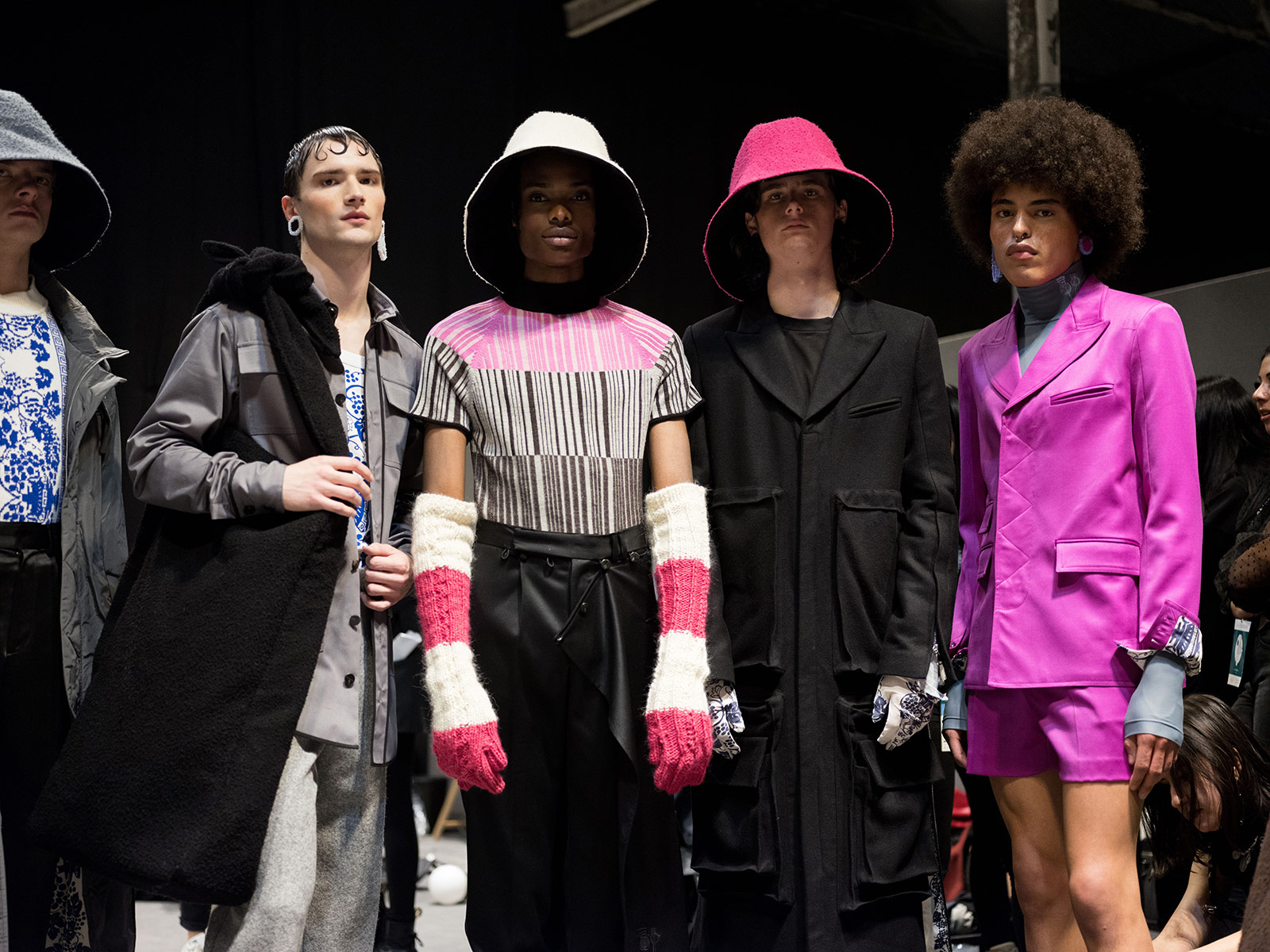 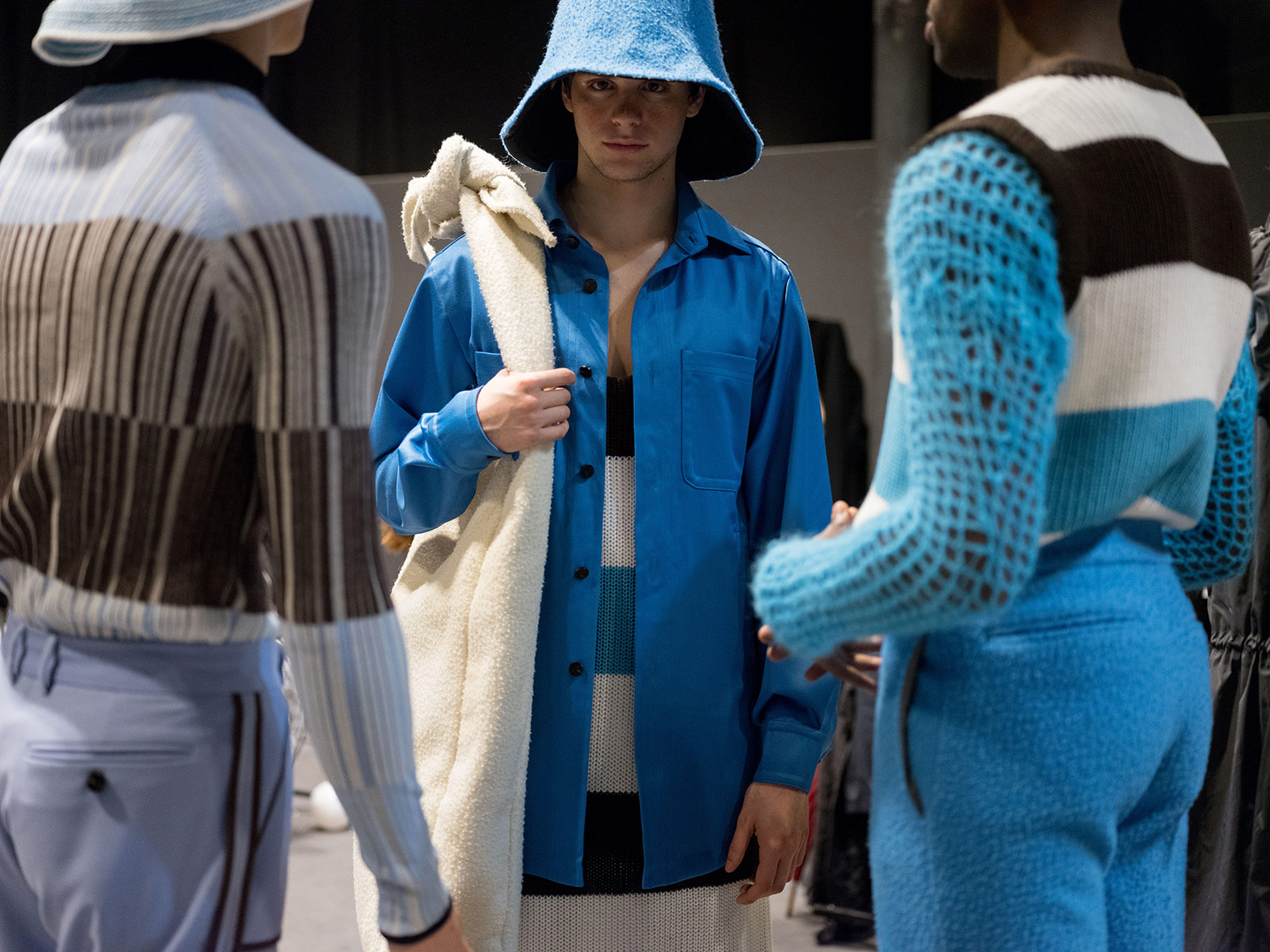 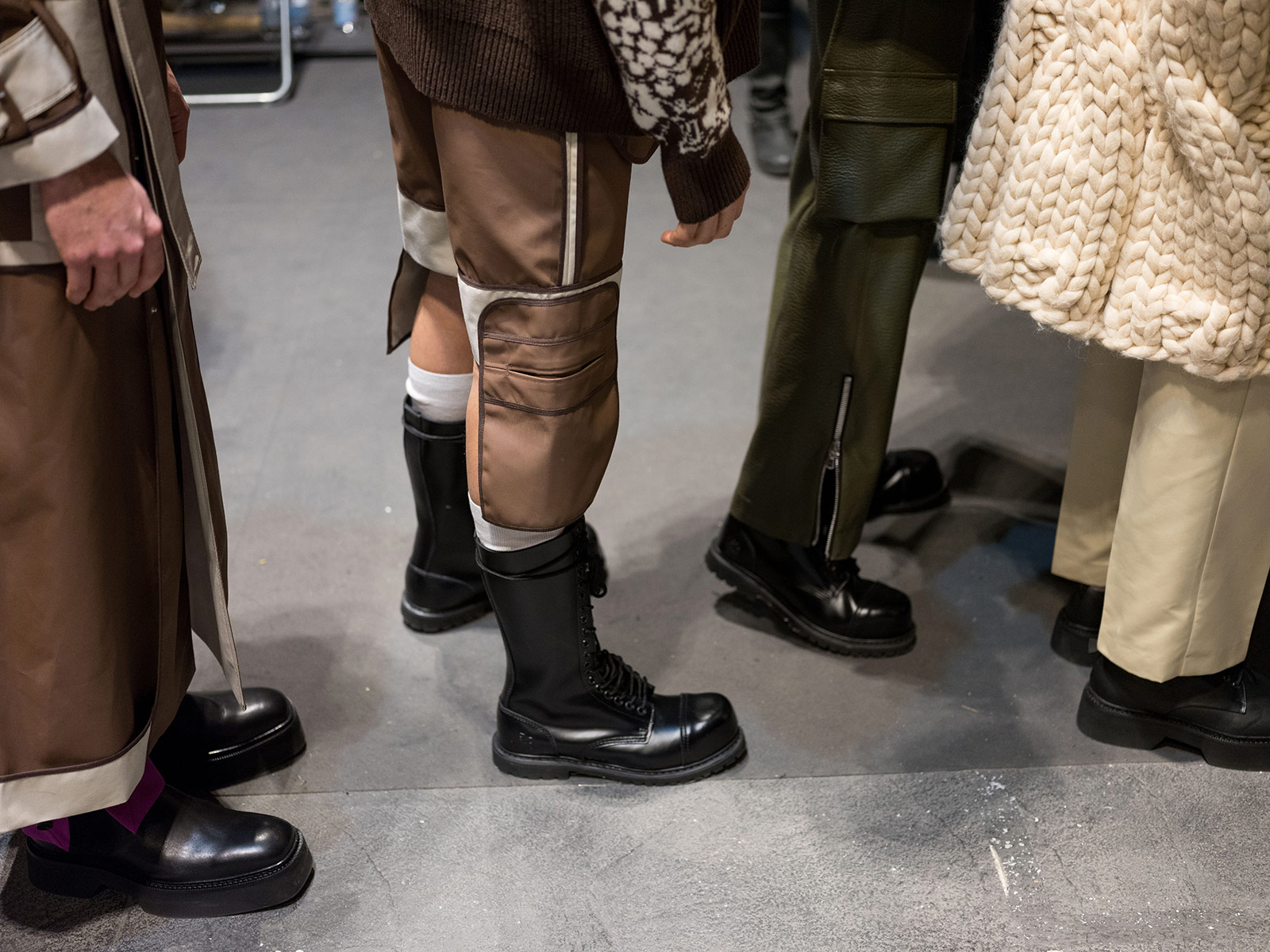 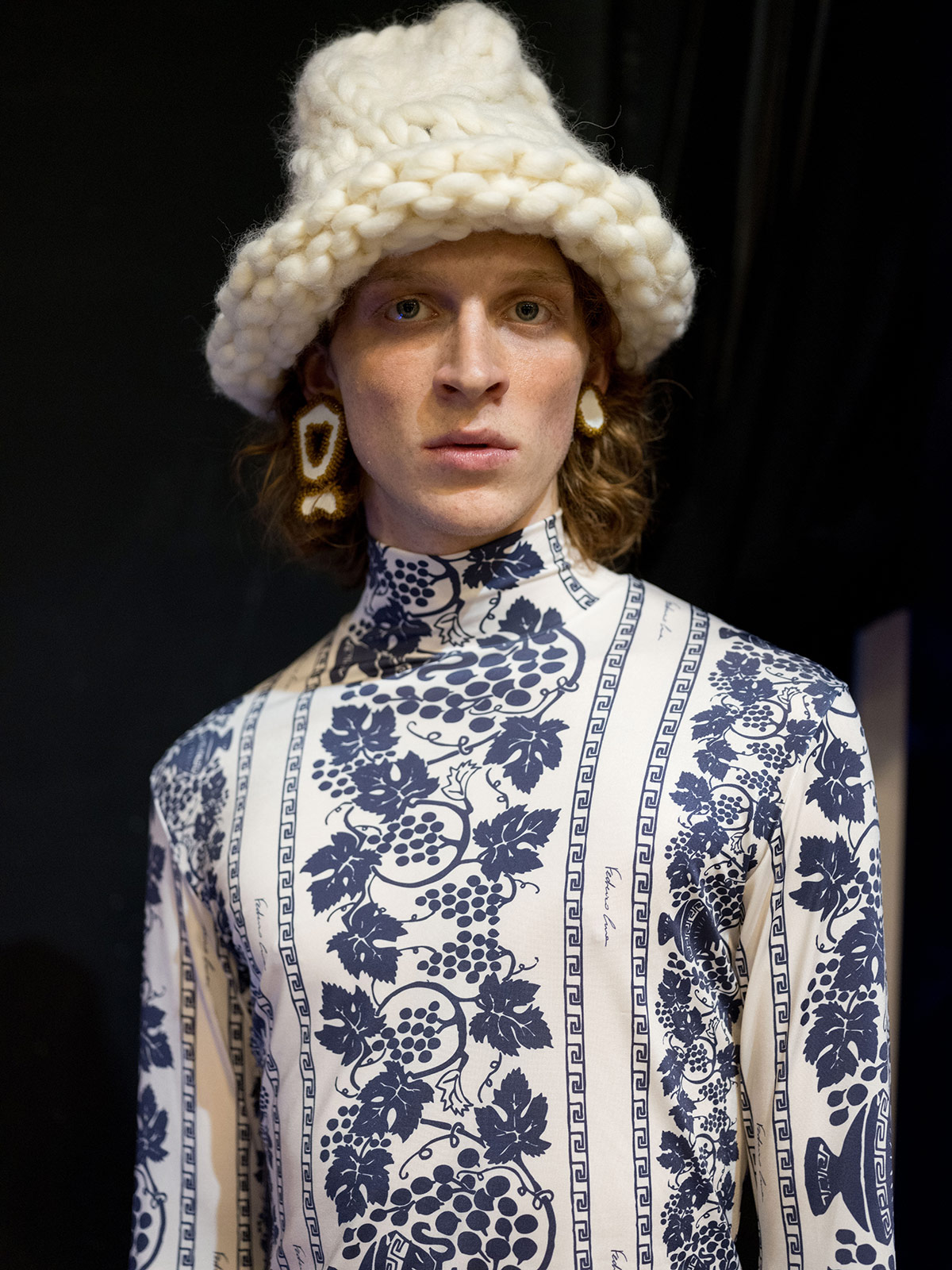 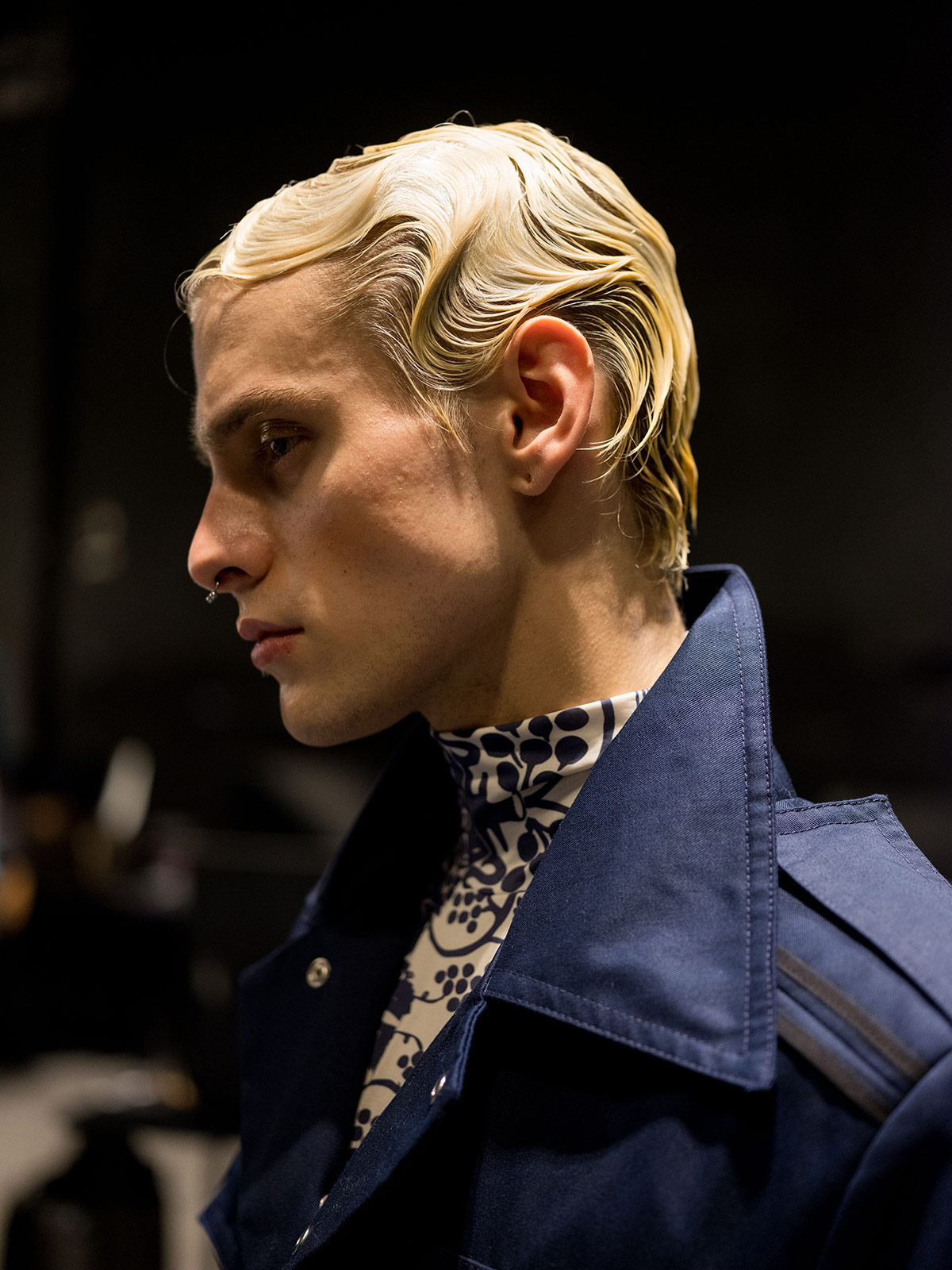 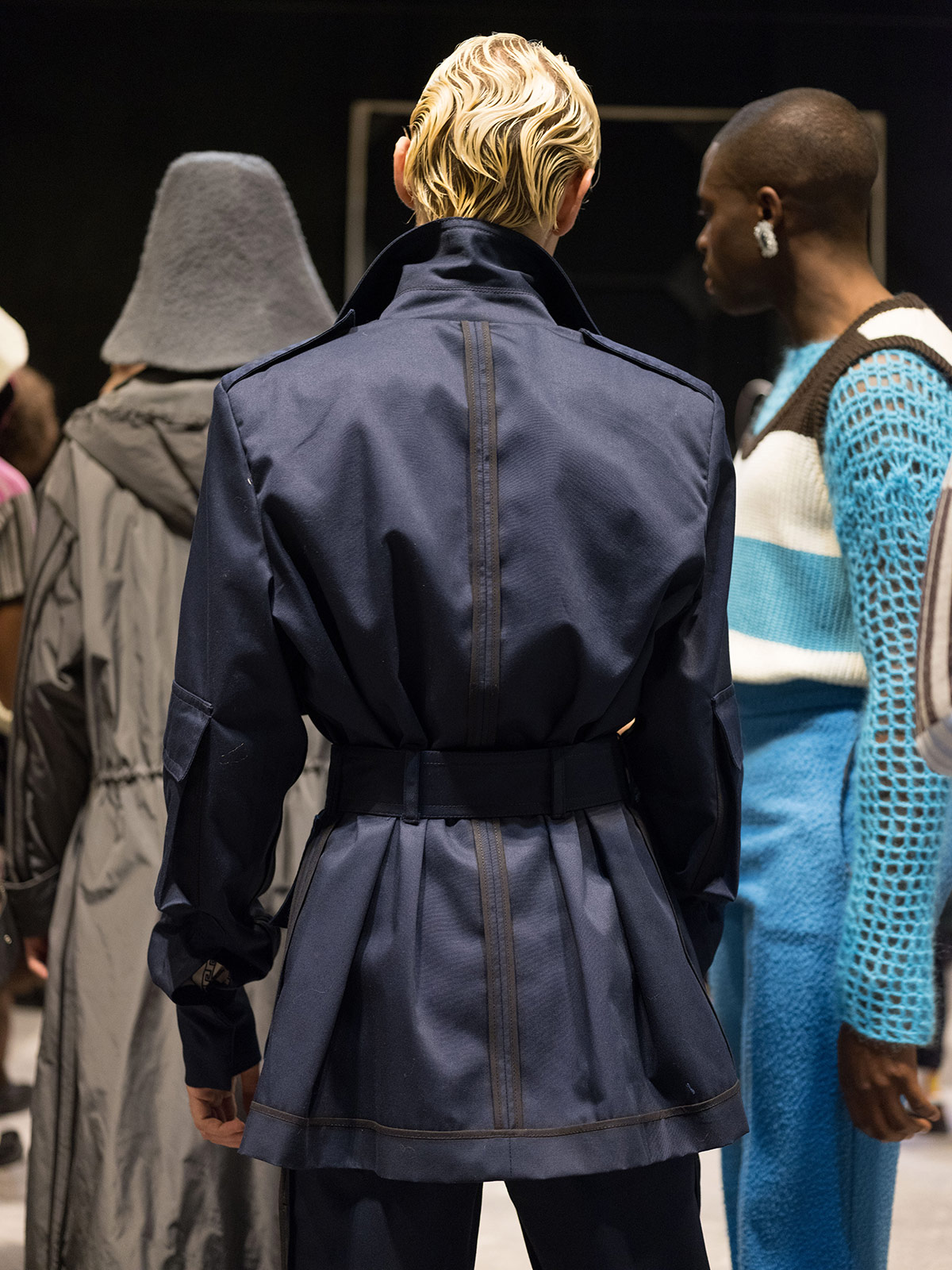 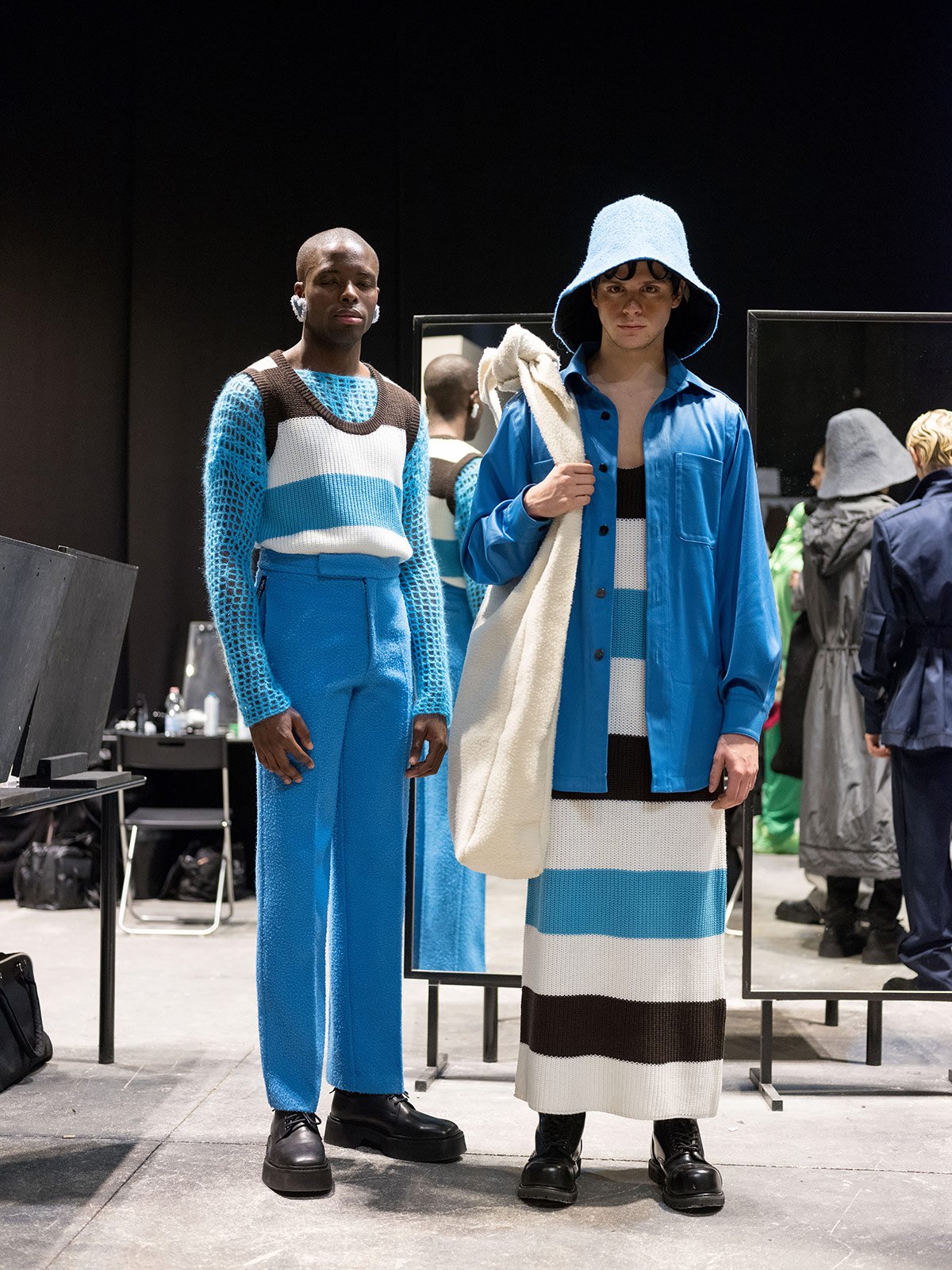 Another highlight show was that of Jing Yu, a finalist of Who’s On Next?’s last edition, a brand founded by designer Jing Yu and artist Wawa Shiqi Liu. For Fall/Winter 2020, the duo explore the possibilities of modern-day office and ‘white-collar’ workers with a strong selection of suits, shirts, tailor jackets and double-breasted coats that play with asymmetry and deconstruction, combined with playful accessories like pearl collars, reinvented as septum piercings or belts, or other jewellery pieces like earrings and pendants with human parts like ears. 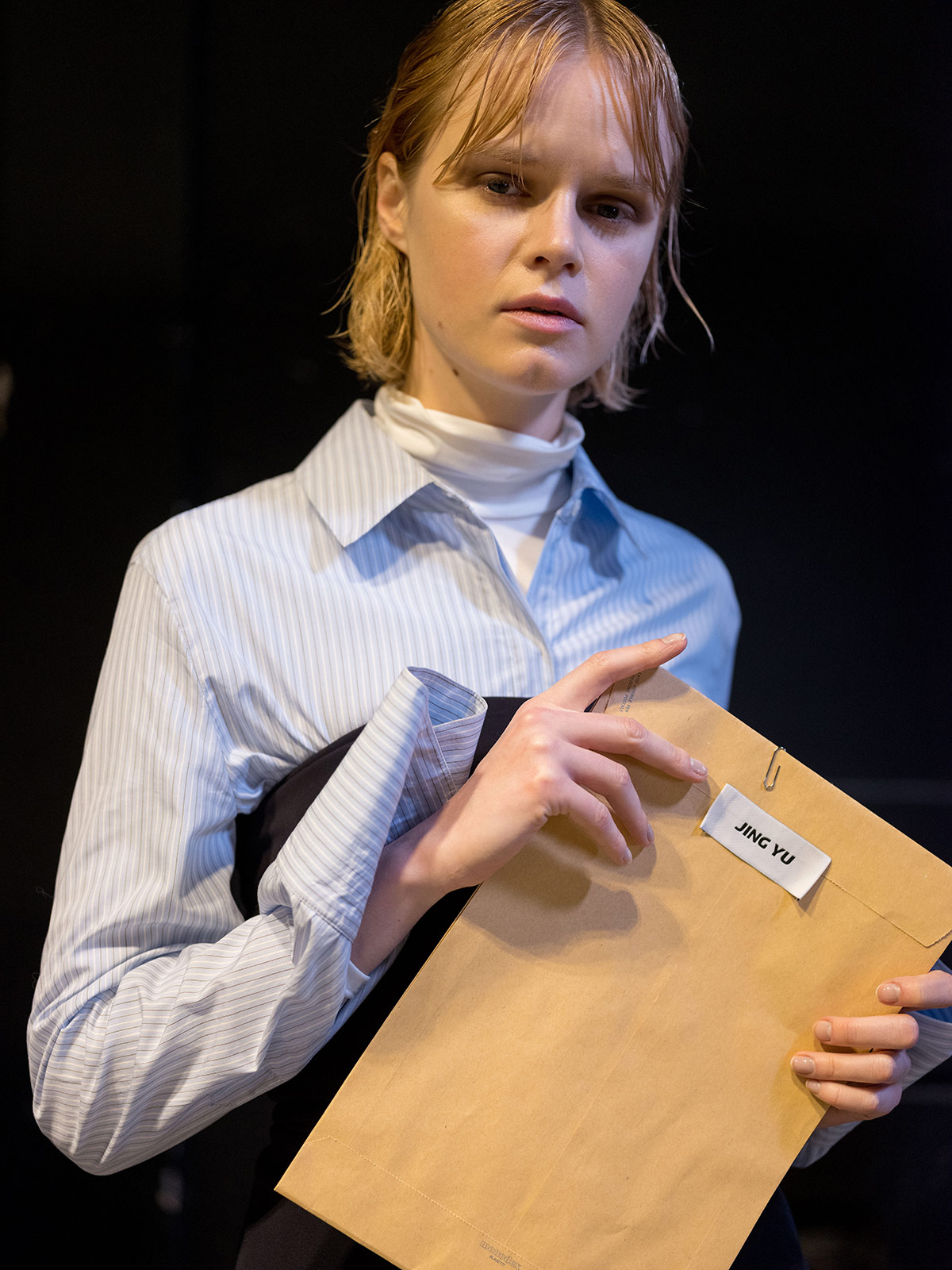 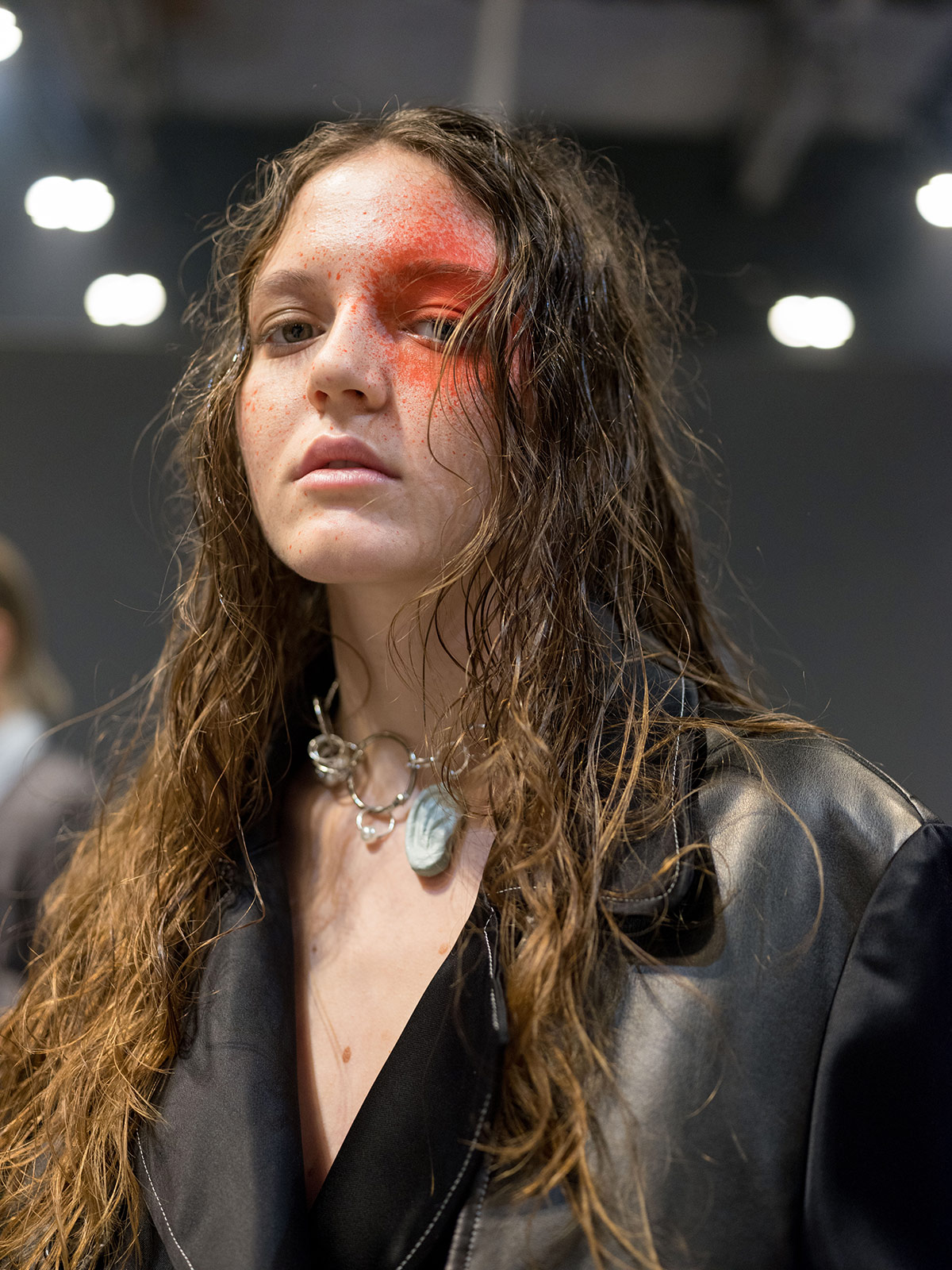 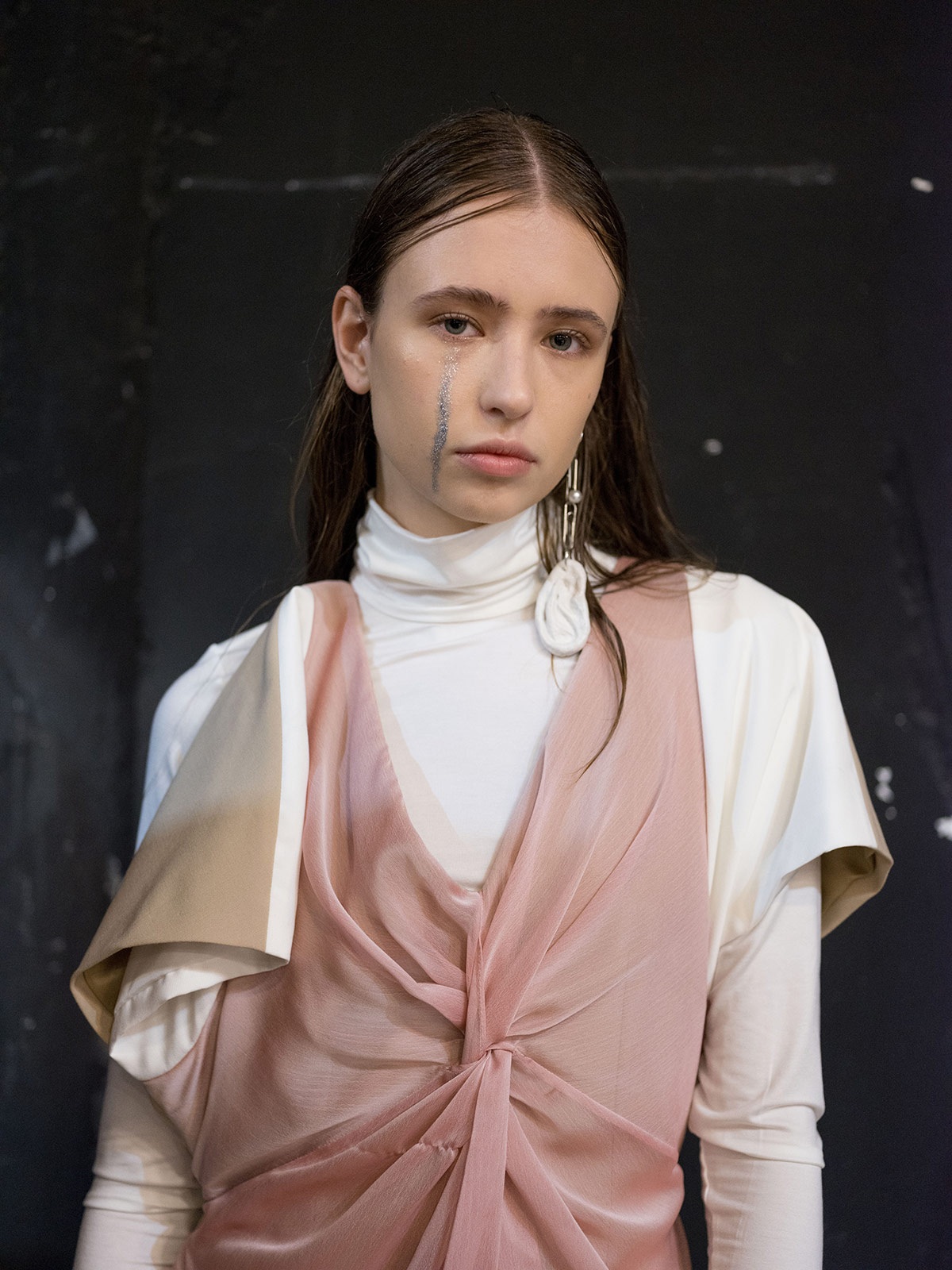 Justin and Chiara from Gall, regulars at Altaroma, presented Omnia, a collection that follows and feels like a continuation of their past releases. Despite many brands and designers falsely claiming that they don’t follow trends or seasons, the duo behind Gall can say so but rightfully so. The face-covering hats and caps, detachable pants, oversized hoodies and multi-pocketed jackets have become staple pieces together with their experimentation with fabrics and techniques. If the previous collection was inspired by nihilism and was mostly black with some hints of blue, this one felt more nature-inspired and the colour palette broadened, including hues of red, green and blue – and black, of course. 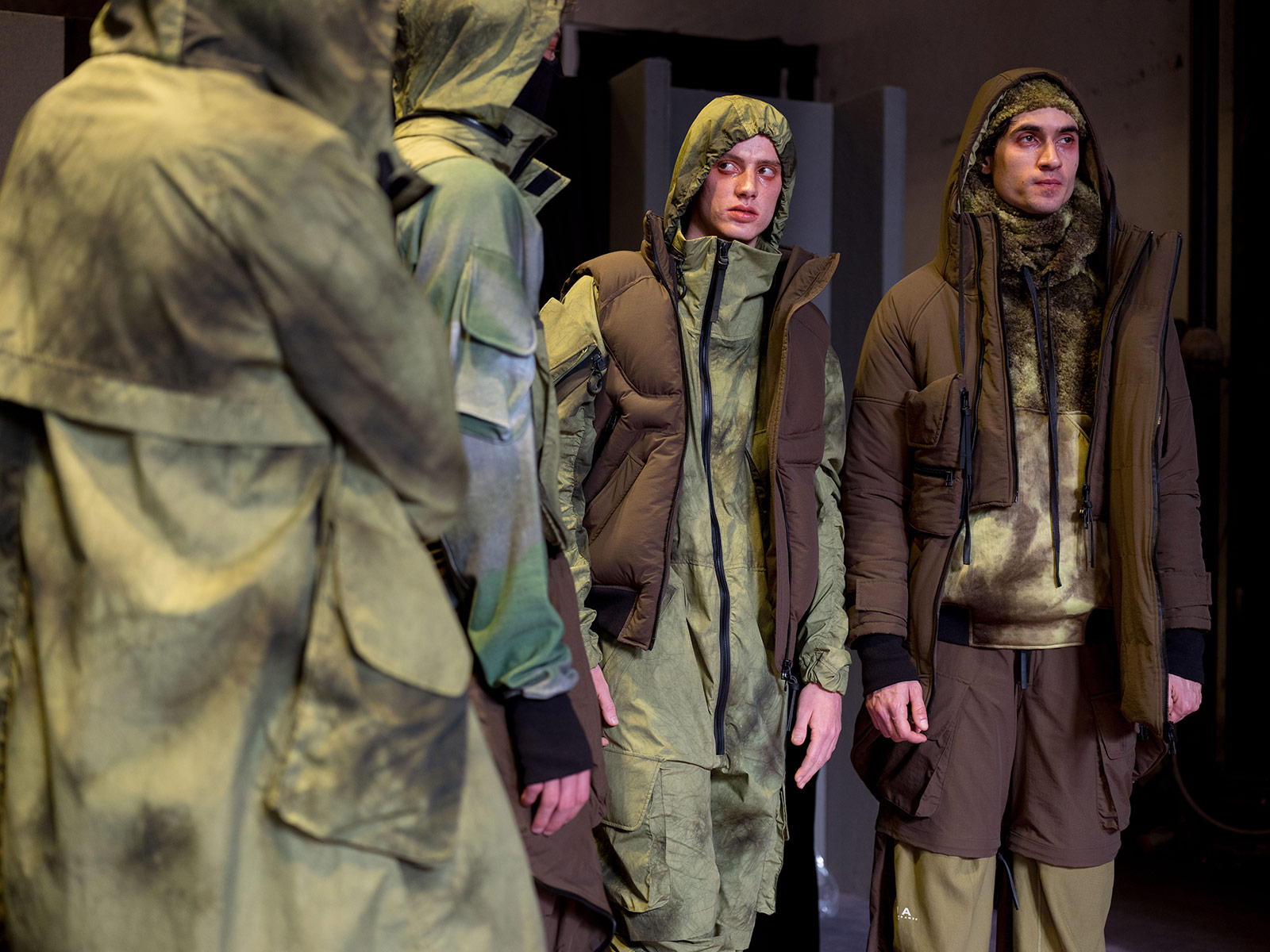 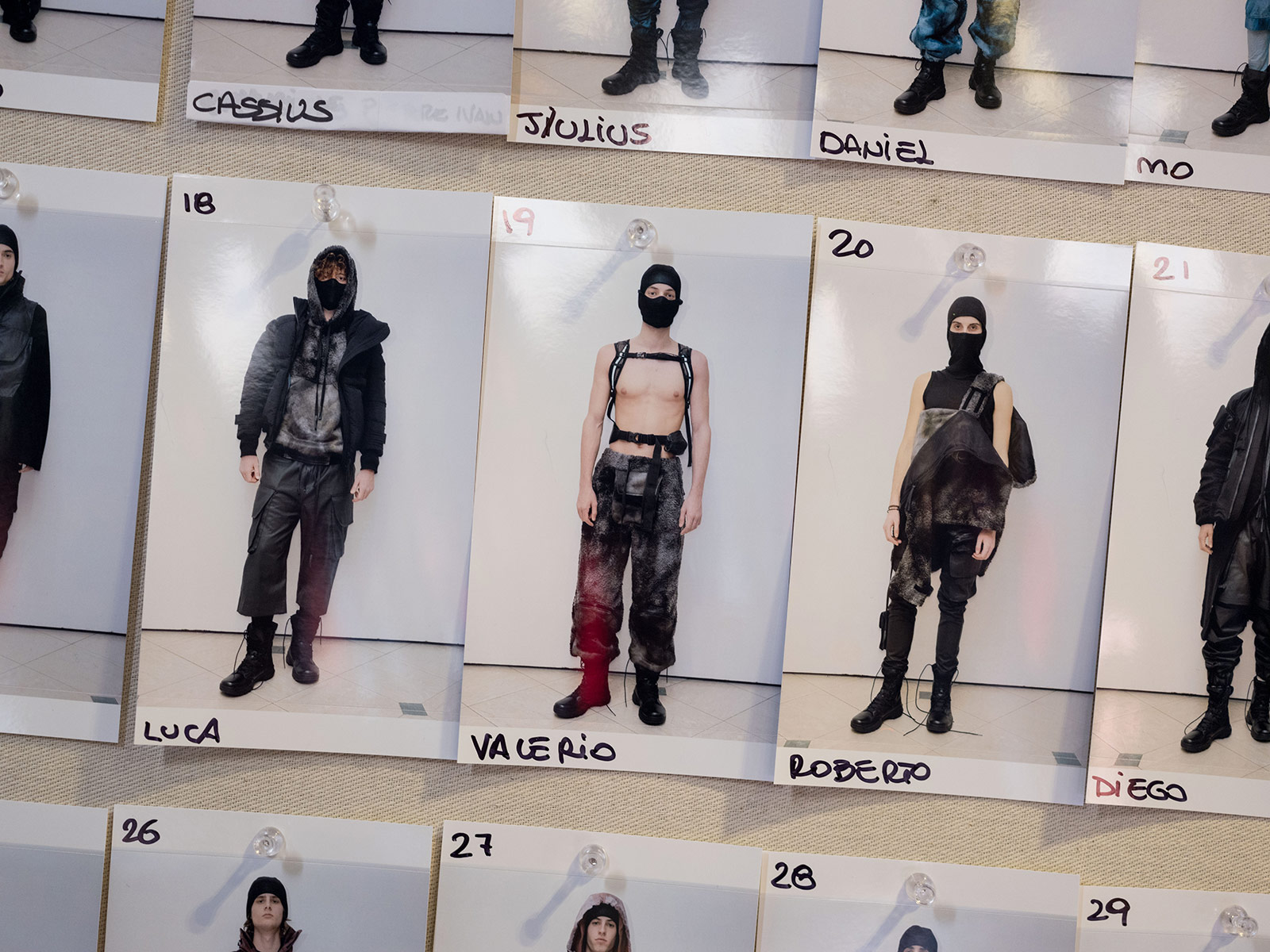 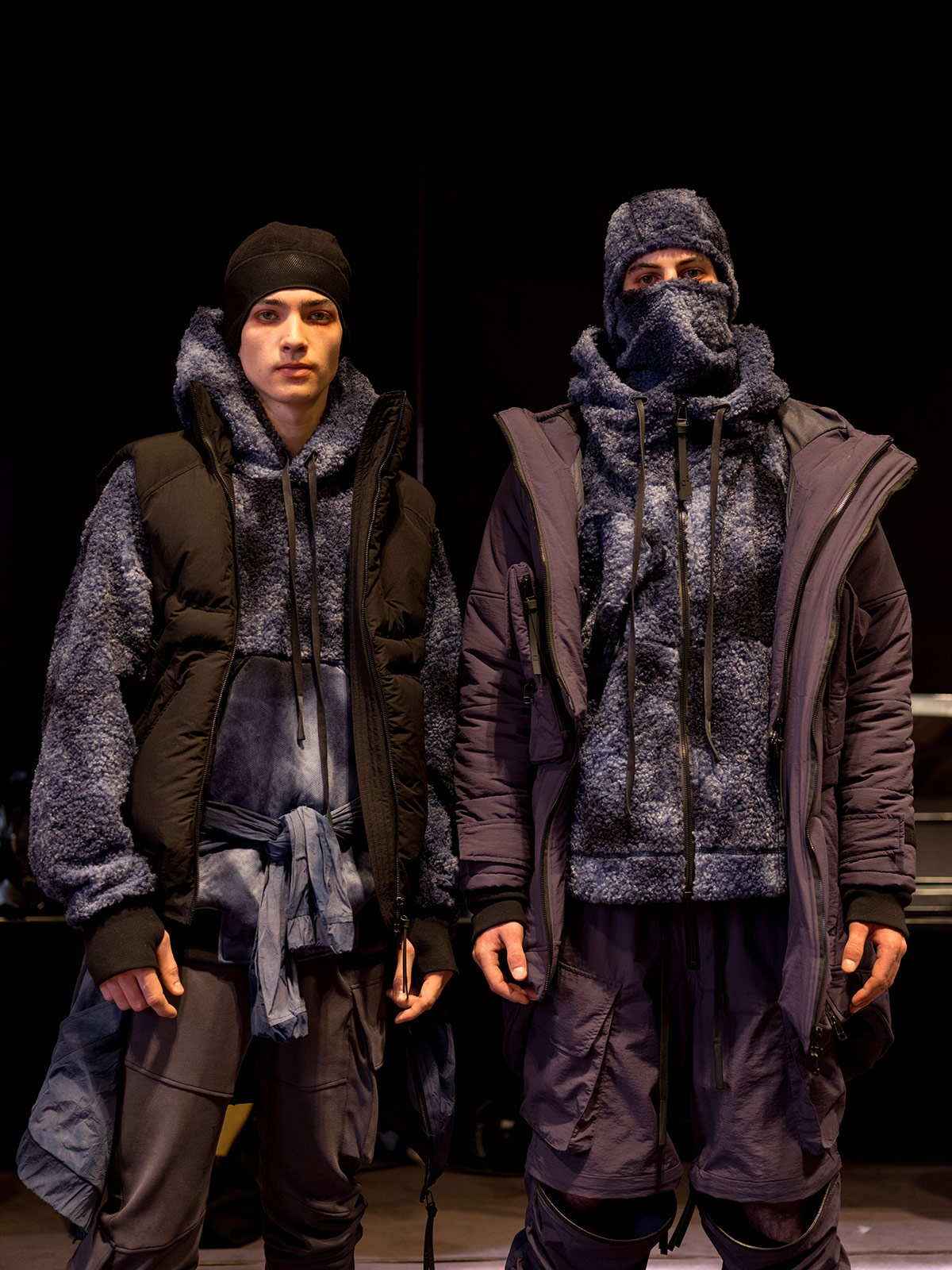 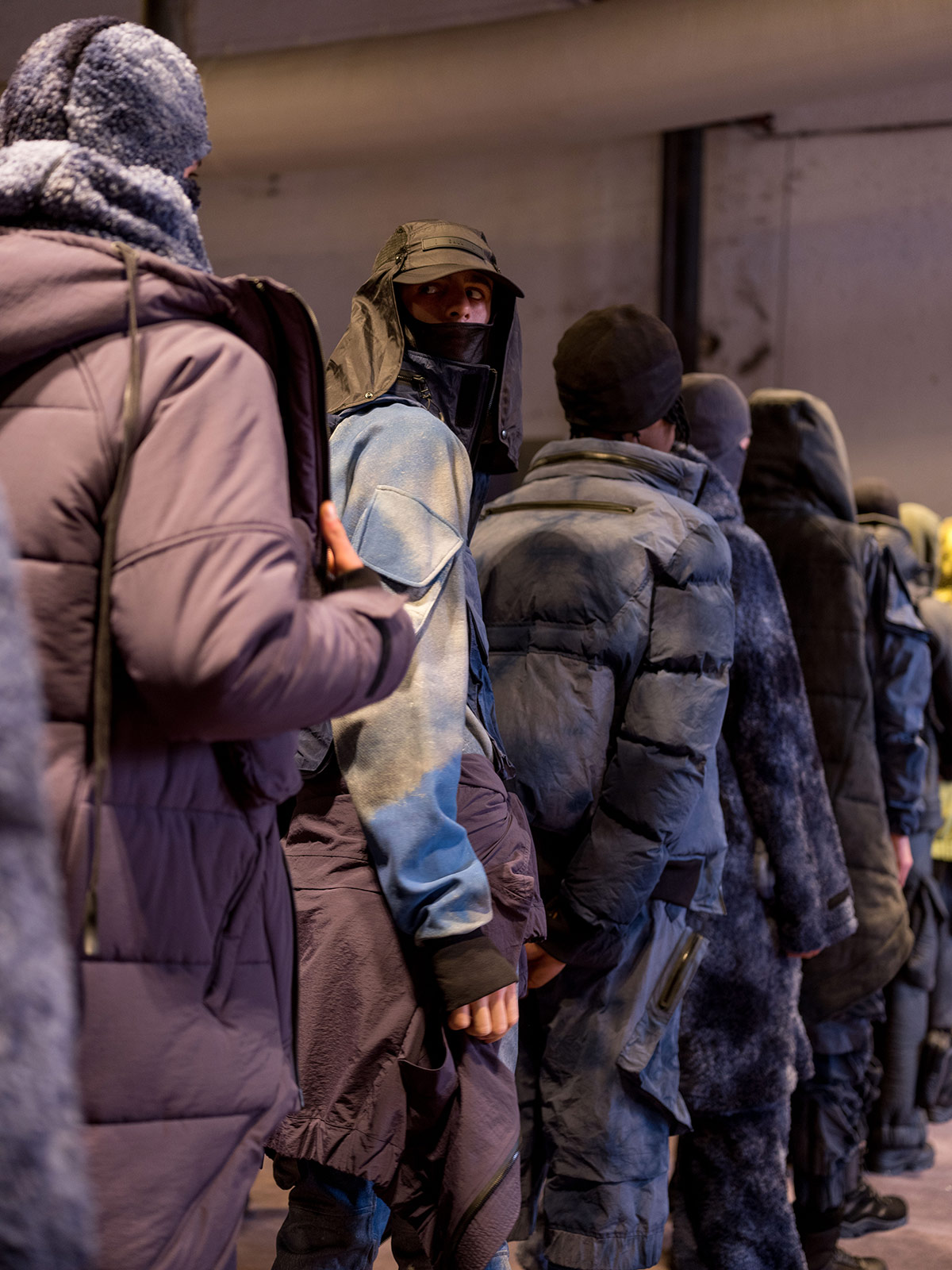 Technical experimentation was also present in Caterina Moro’s collection, titled Wood. On the runway, models walked next to a handful of standing branches, a nod to nature and the environment, which also inspired many of the prints of the clothes as well as their shapes and silhouettes – for example, the ‘leaf plissé on trench coats and dresses. Moro, who actually graduated from Musicology, approaches fashion differently than other designers because of her background, and this time, she focused on fabrics like velvet, cashmere, denim and satin, and on ecology – the prints were made on Wastemark fabrics (leftover pieces) and she used sustainable colour paint. 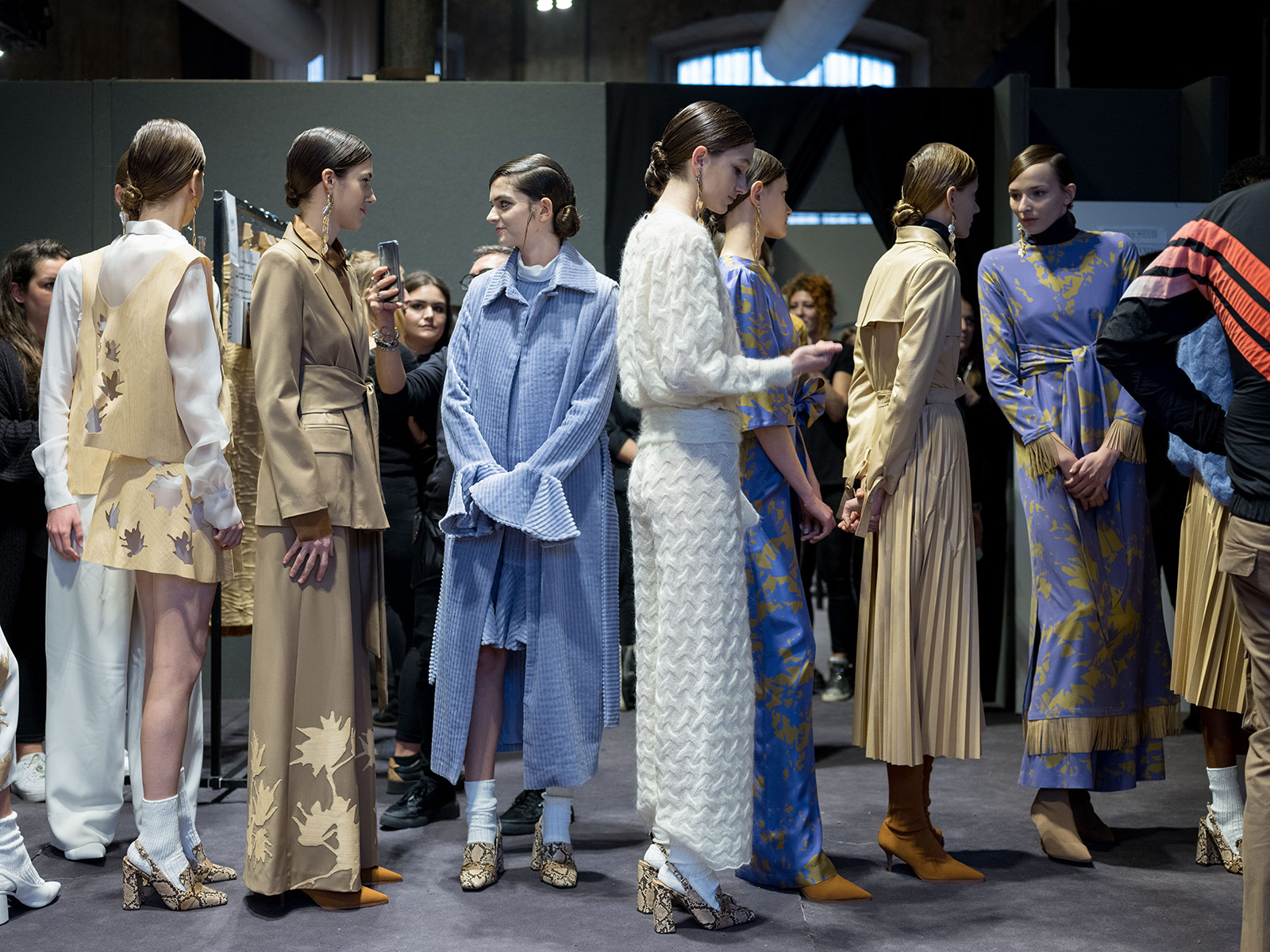 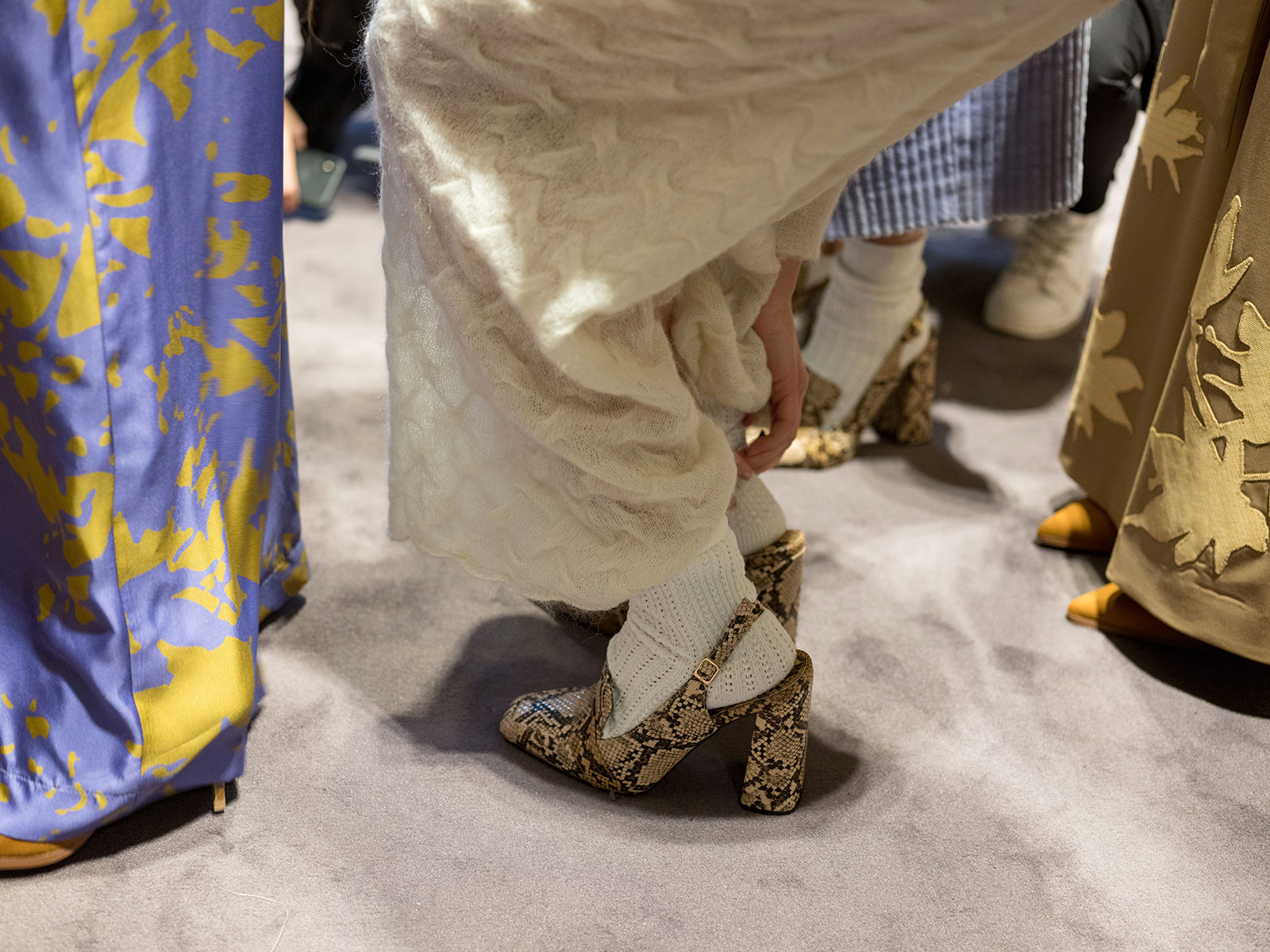 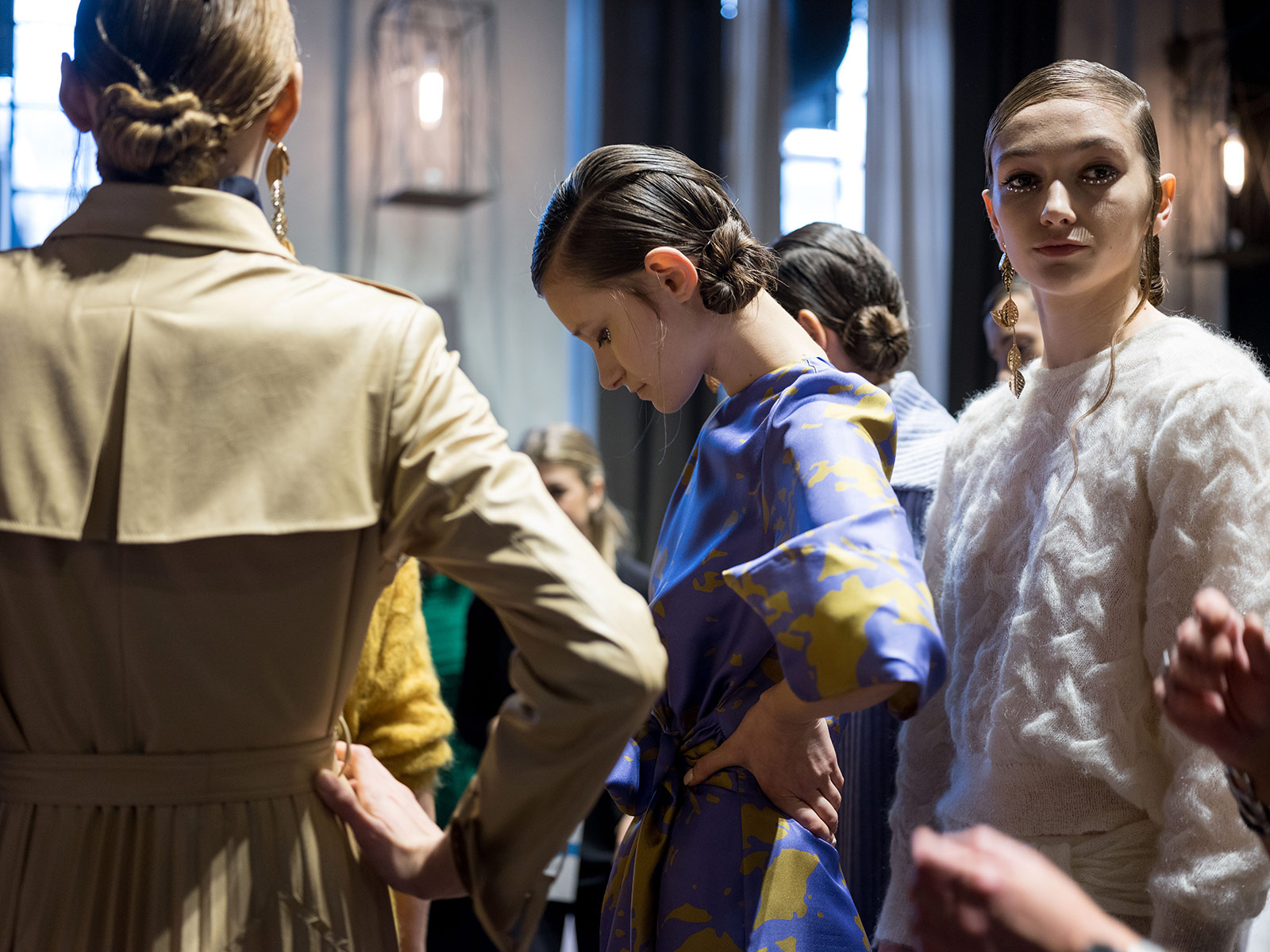 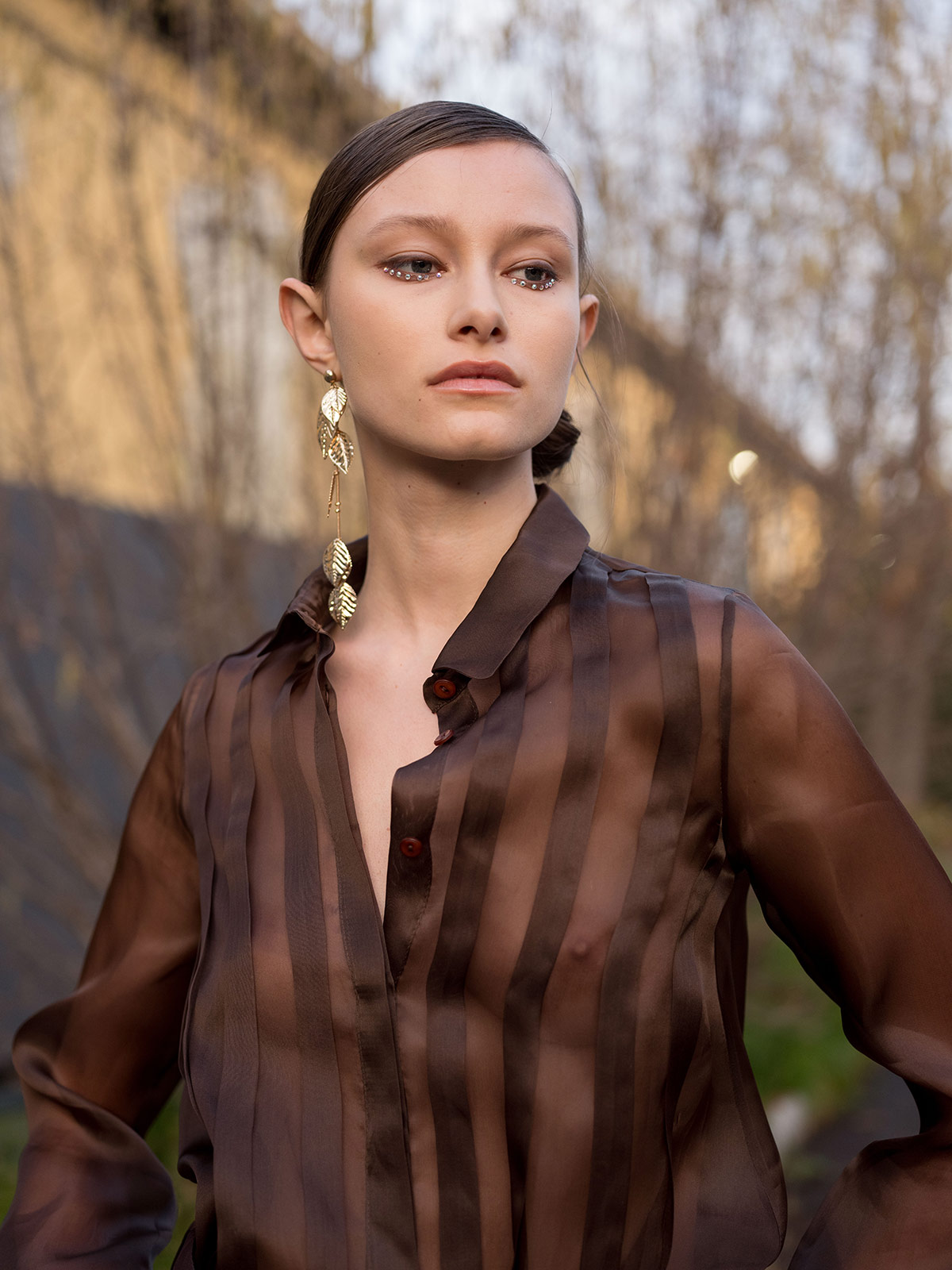 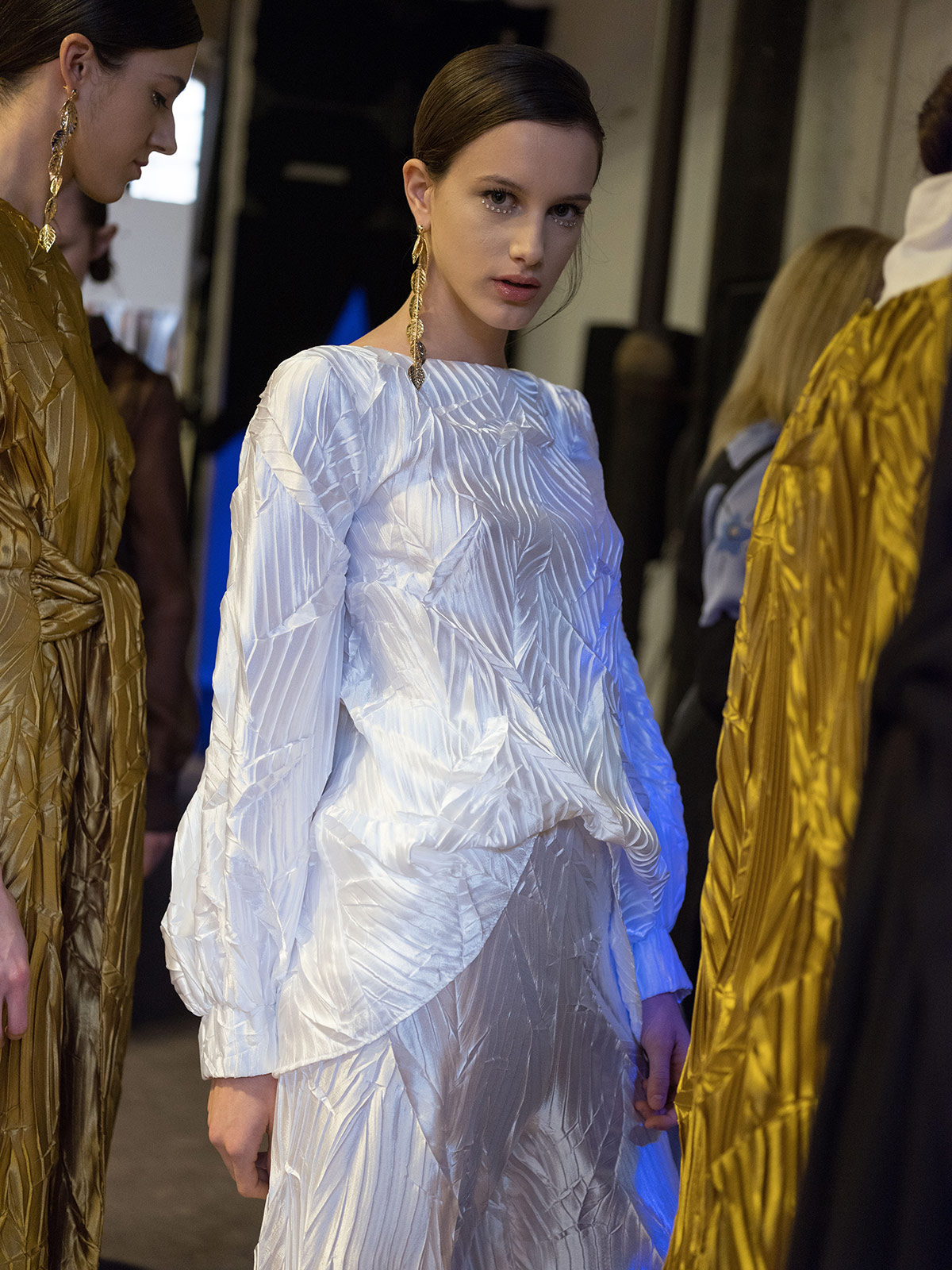 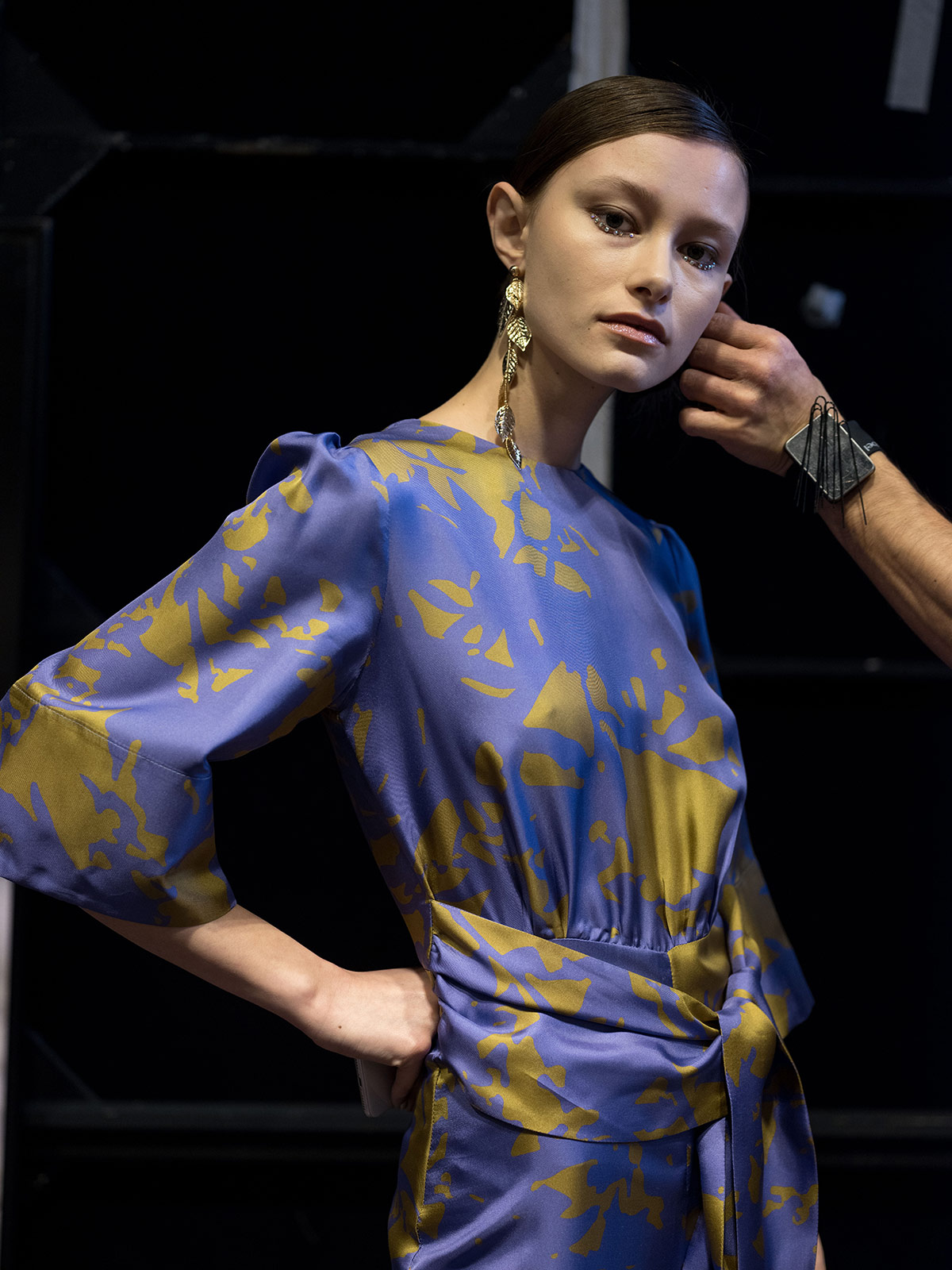 To finish, we must also highlight the talents coming out of the Accademia Costume & Moda. As students need to focus on squeezing their creativity and ideas and present garments that are personal, lively, fun and not necessarily commercial, it’s always a breath of fresh air to see their shows. This time, there were interesting proposals, like that of Eva Bureau, who won the ready-to-wear category with a collection characterized by strong, graphic prints and great styling; Gabriele Larcher, whose deconstructed garments were somehow futuristic (also, equally impressive were the shoes, made out of cutout and repurposed sneakers); Irene Valandro, whose denim pieces had interesting shapes and silhouettes in addition to great colour gradings; Marco Passone, with beautiful, richly vivid prints on outerwear made of light, flowy fabric; or Maddalena Gentile, who covered her models with blowfish-like headpieces and whose collection was hugely inspired by the sea world. 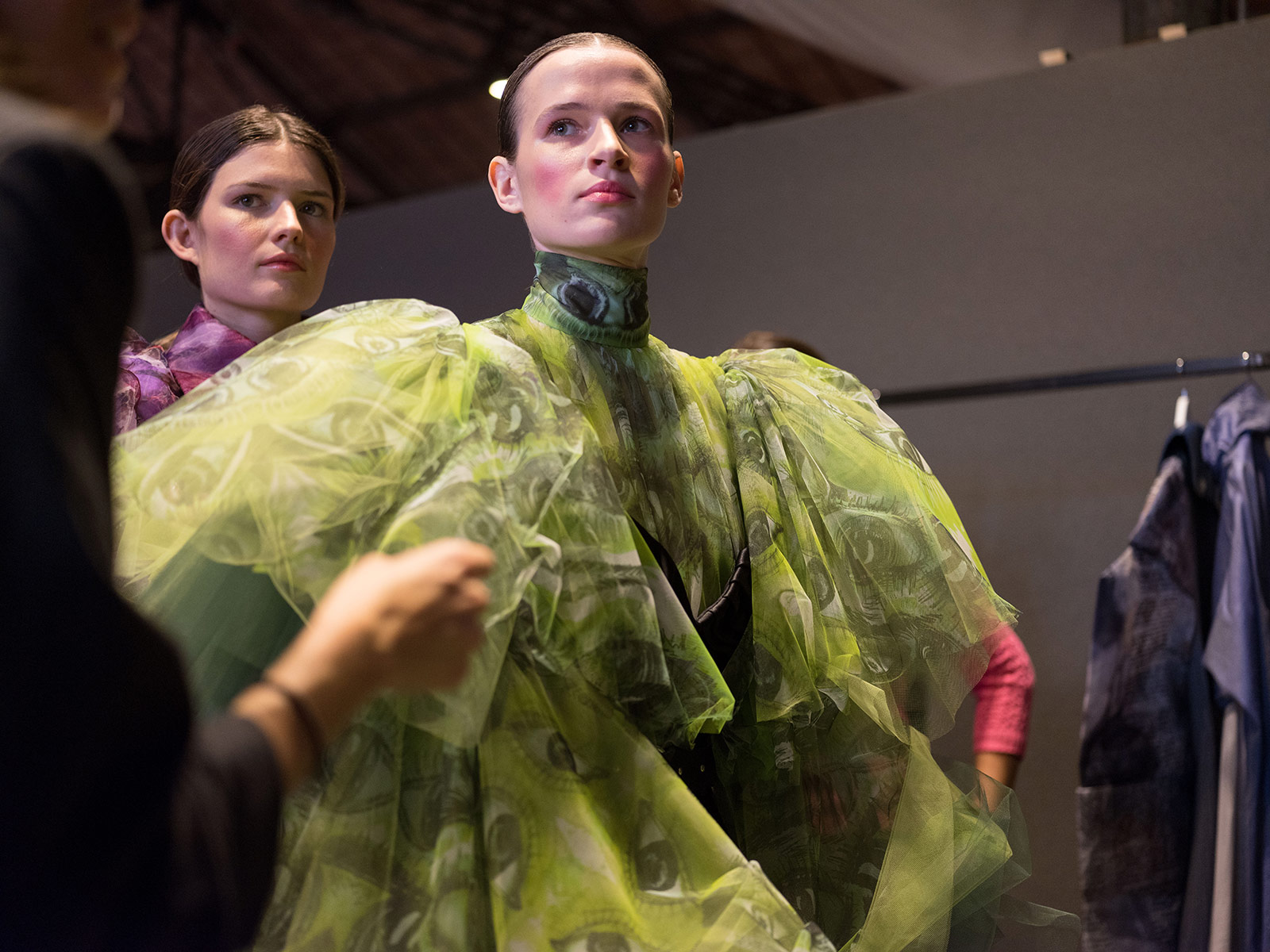 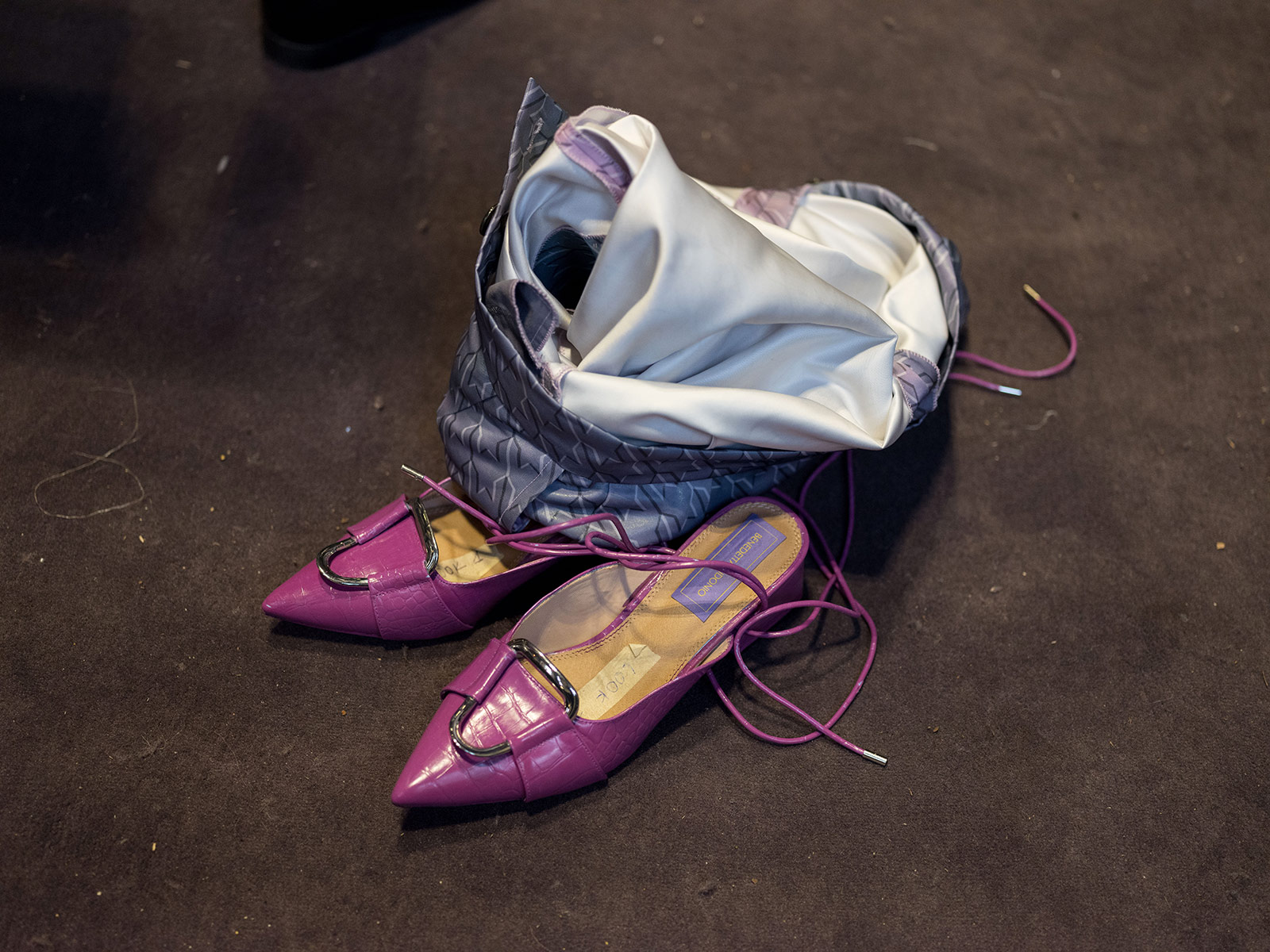 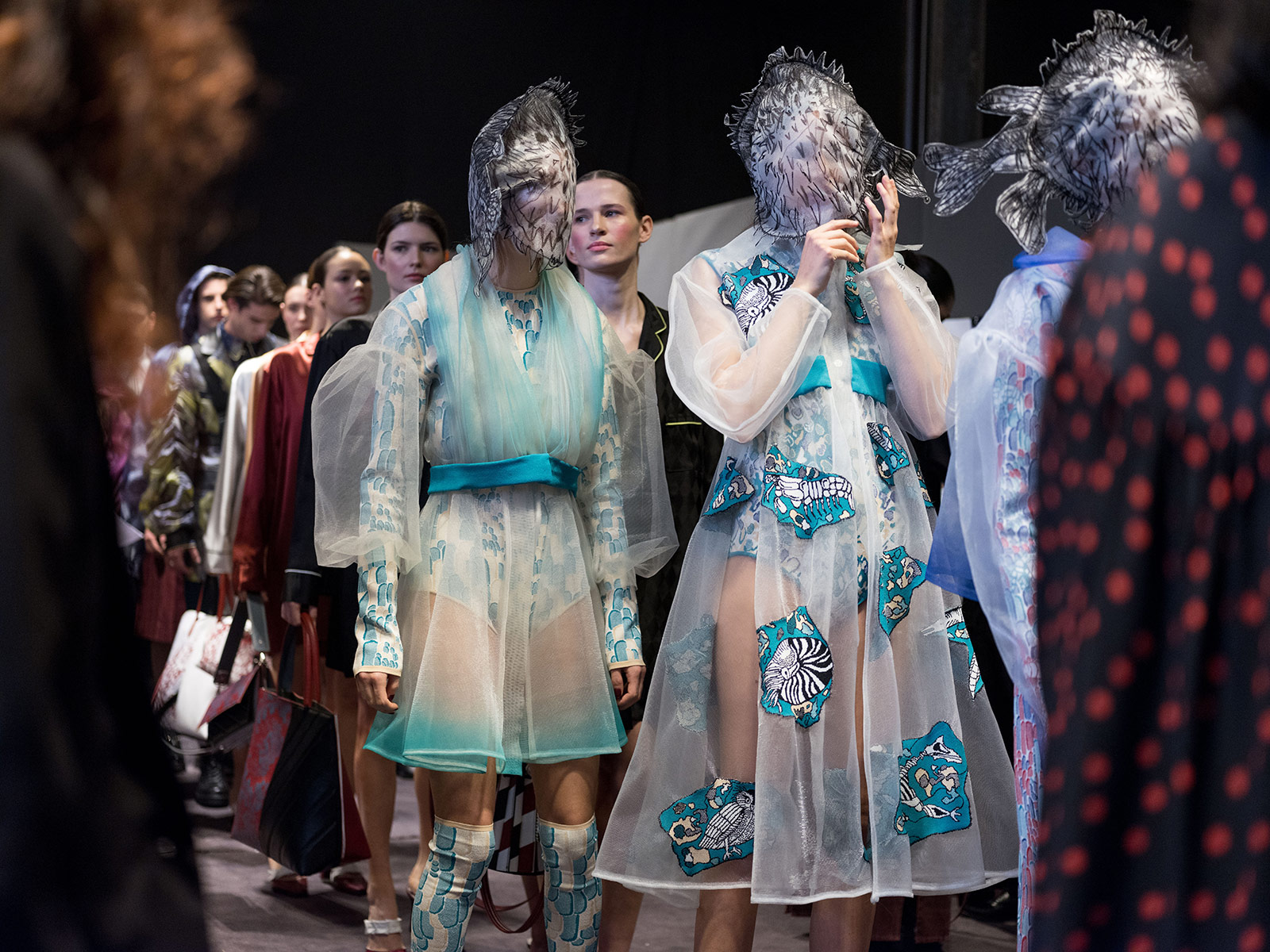 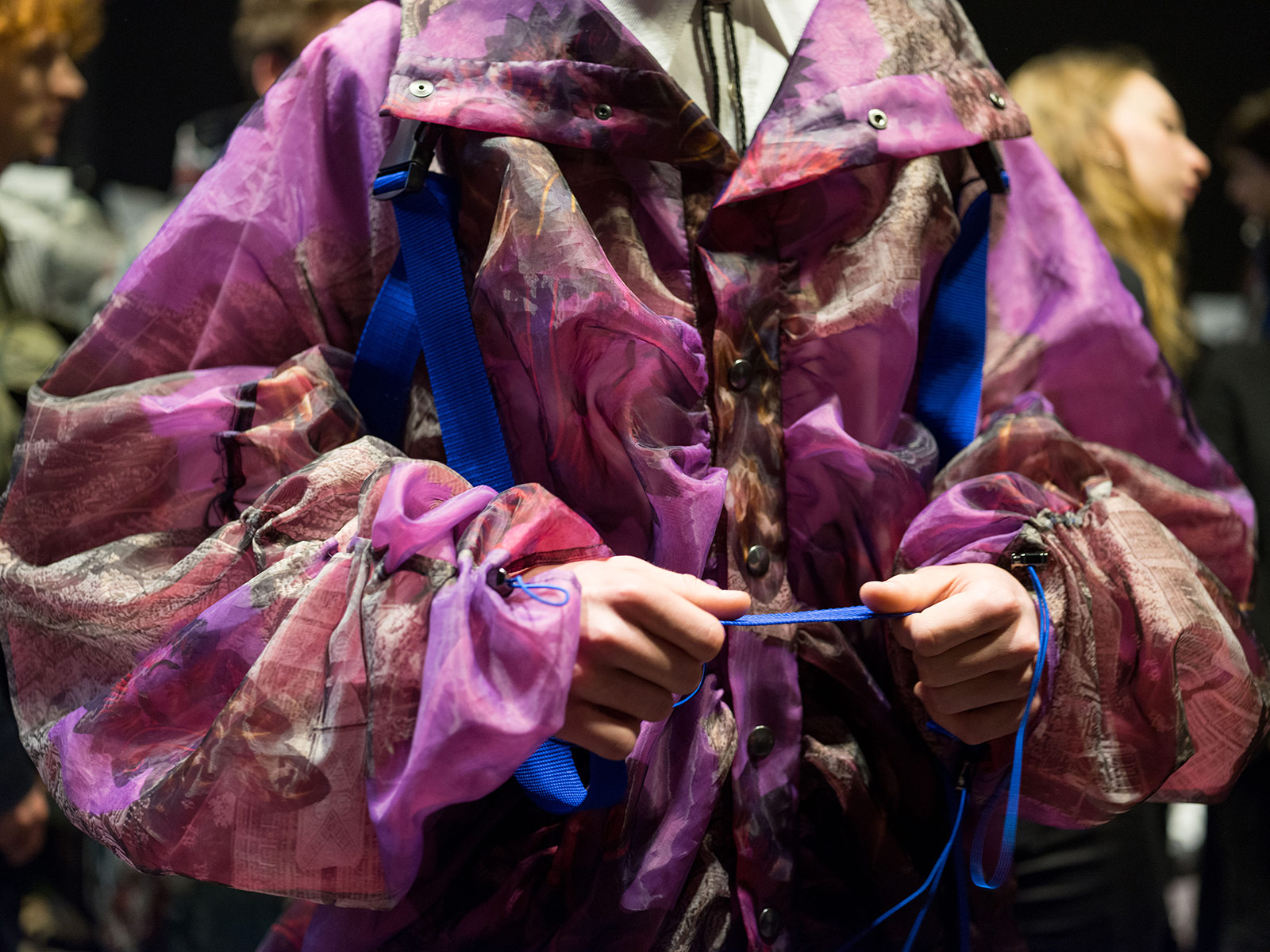 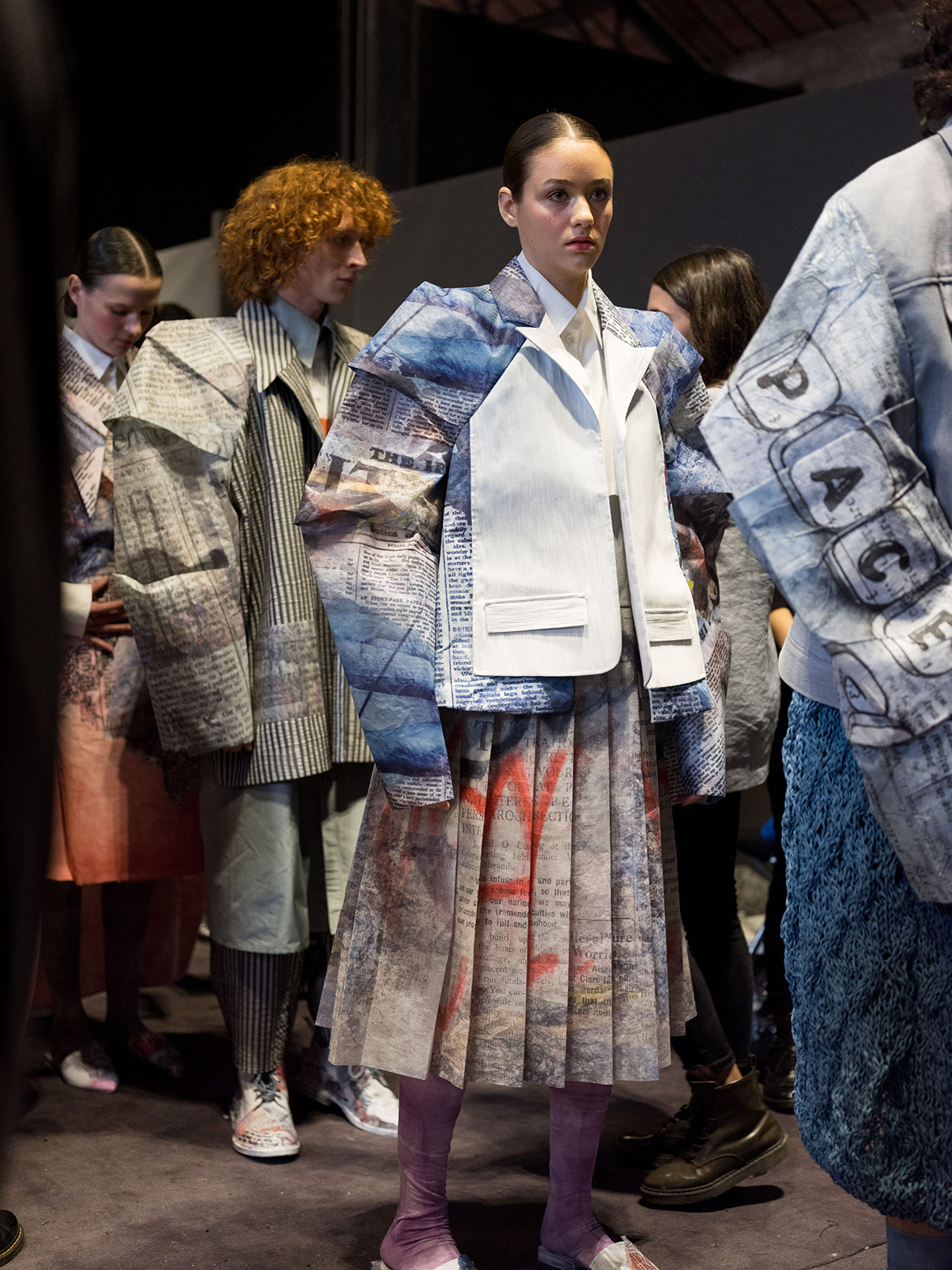 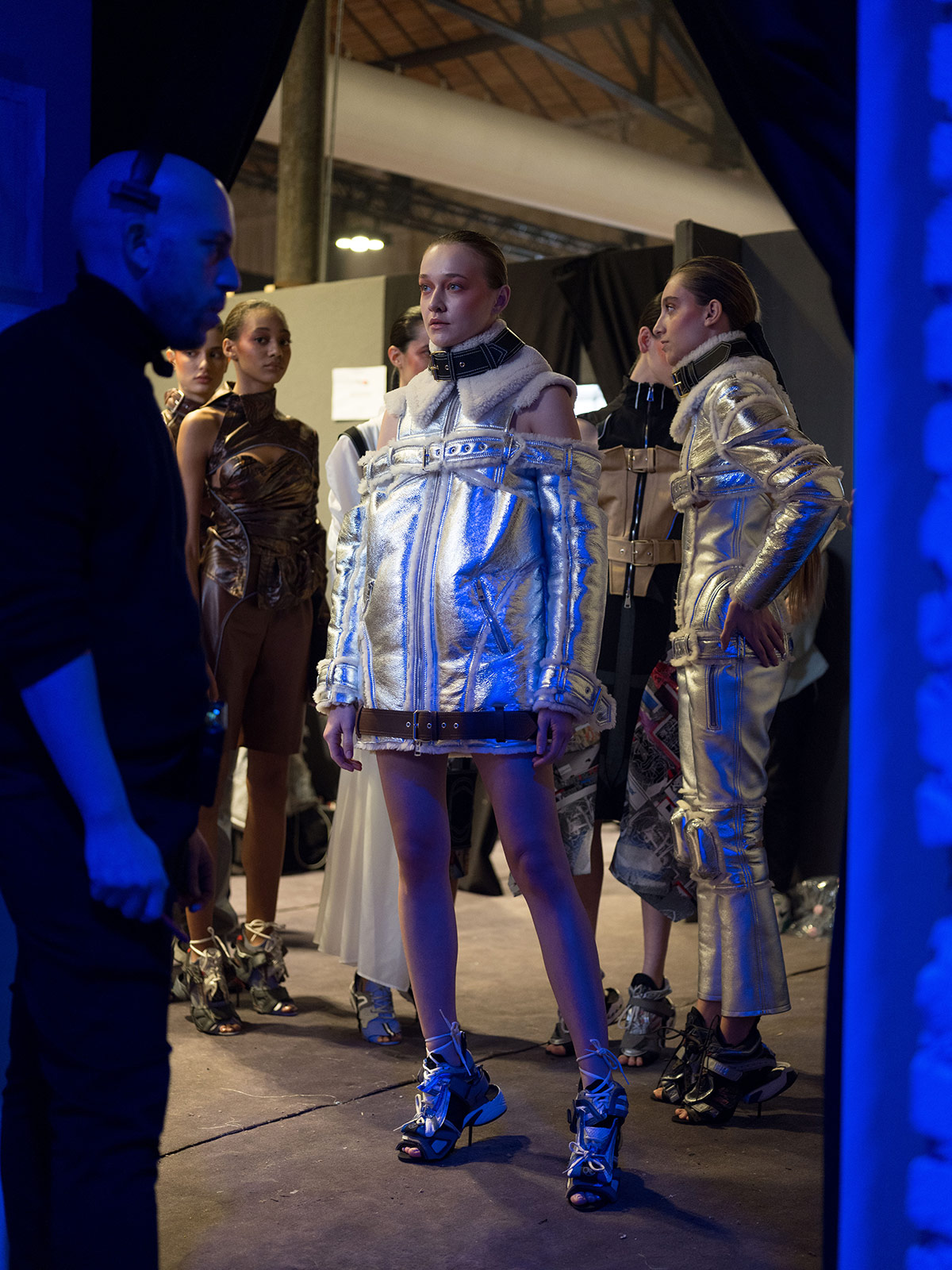 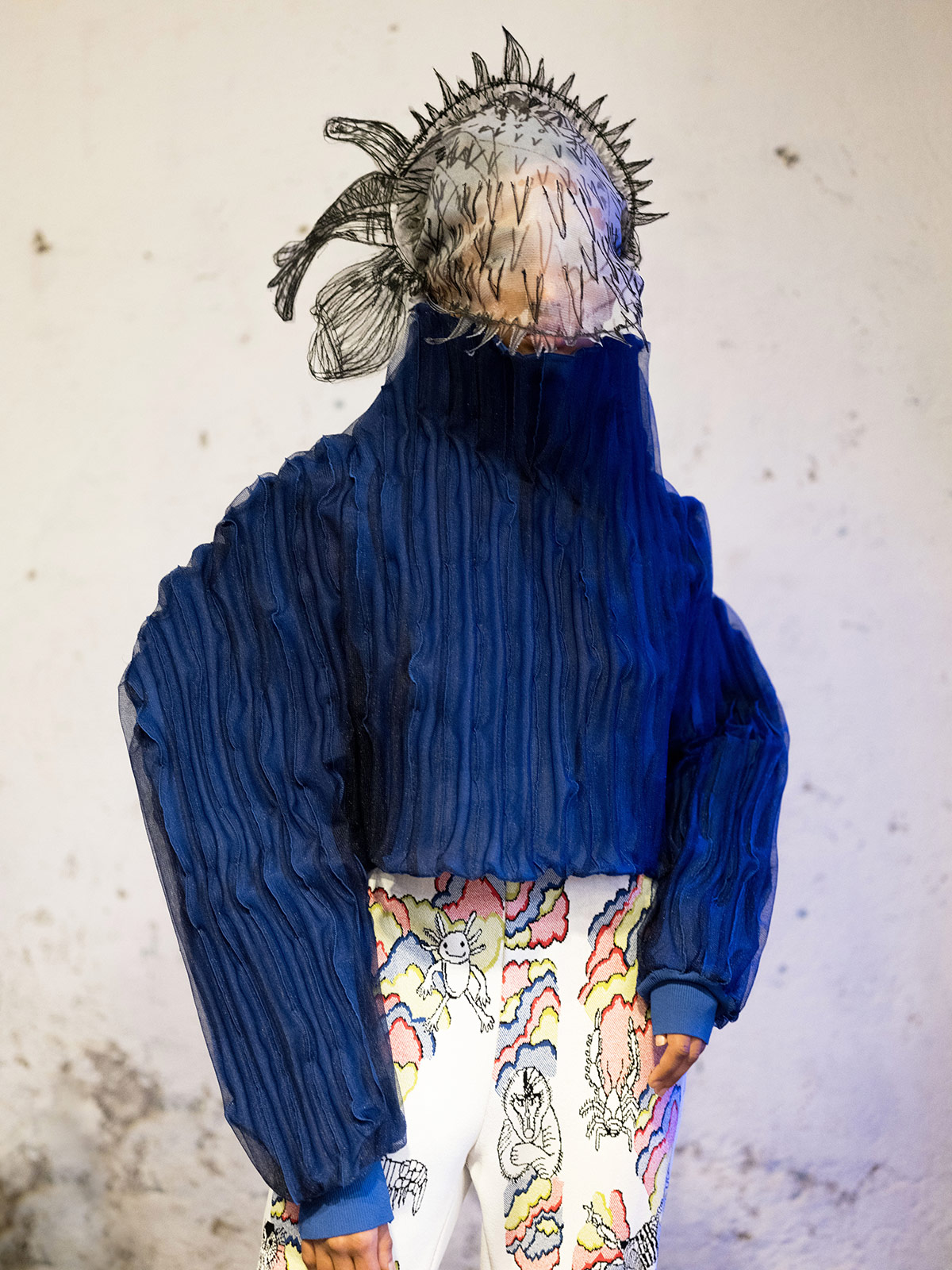 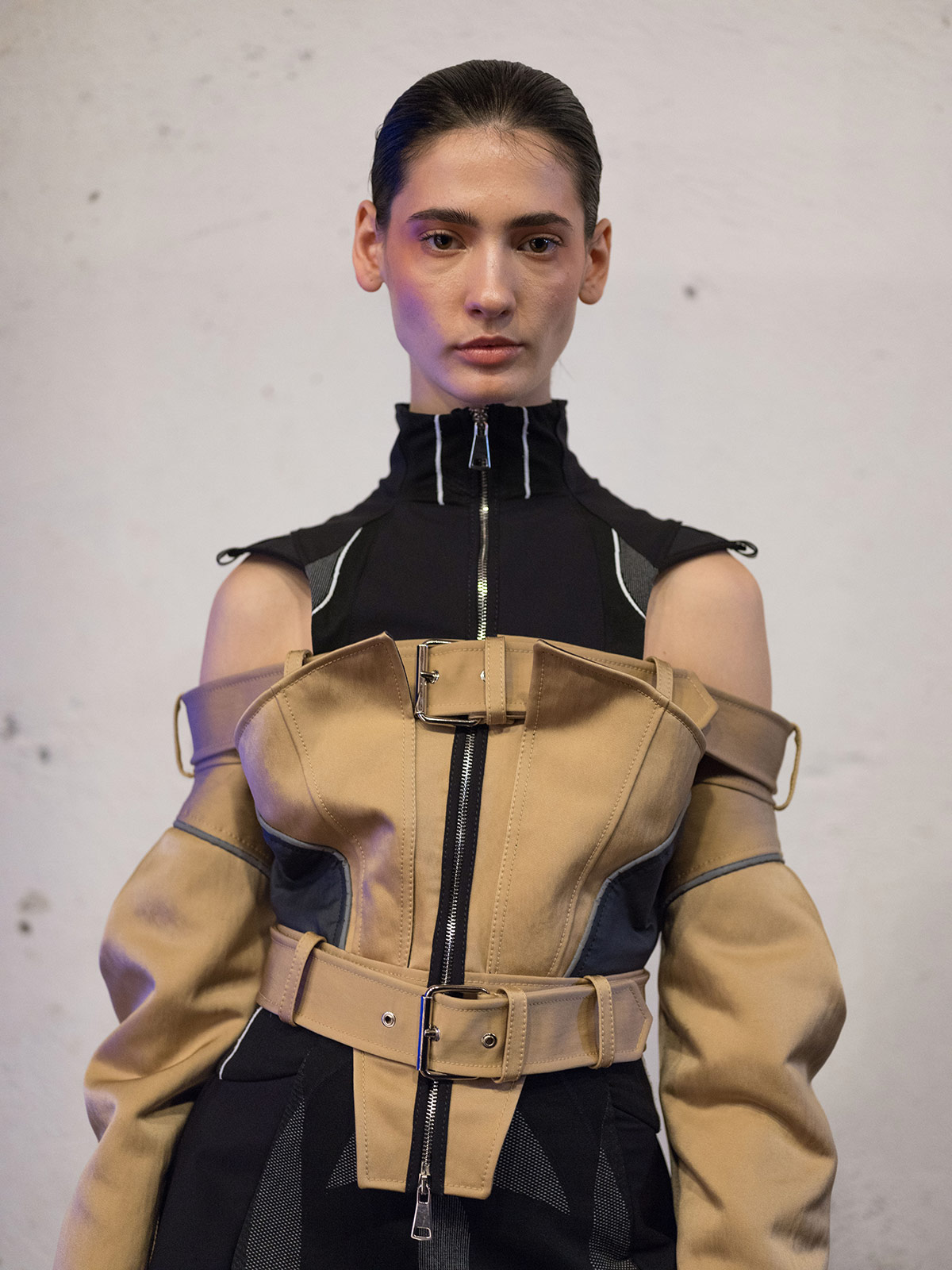