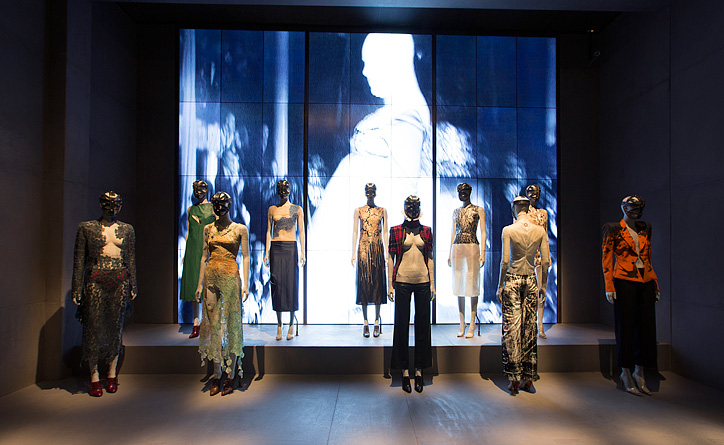 In 2010 British fashion designer Lee Alexander McQueen committed suicide, leaving behind one of the most incredible legacies ever to be witnessed in fashion design. This weekend saw the opening of one of the most highly anticipated exhibitions of 2015- “Alexander McQueen: Savage Beauty” at London’s Victoria and Albert Museum. Based on the show held at the New York Metropolitan Museum of Modern Art in 2011, Savage Beauty has finally found itself in the birthplace of McQueen, a city in which he so often found a source of inspiration for his collections.

Fantastical, overwhelming and spectral are some of the words that best describe the show. Emotive is perhaps the most fitting description- as you go from room to room, your mood fluctuates between jaw-dropping amazement and quiet intensity. Here are two very different and moving moments.

A Life-size cabinet of curiosities designed by Sam Gainsbury who produced many of Alexander McQueen’s runway shows.

Upon entering the life-size cabinet of curiosities, you’re engulfed in a spectacular floor-to-ceiling collection of some of the most iconic, wonderful and strange accessories and one-off garments designed by Alexander McQueen and his collaboratives. There’s a skeletal headdress made from wood by milliner Philip Treacy (The Girl Who Lived in the Tree, Autumn/Winter 2008), an aluminium jawbone mouthpiece by jeweller Shaun Leane (The Overlook, Spring/Summer 1998) and a medieval-looking cap by set designer and director of the museums of British Folklore and Witchcraft, Simon Costin (Dante, Autumn/Winter 1996).
As you take in the majesty of the objects, a series of video clips play simultaneously, showing the artefacts in action on the catwalk. Some of the pieces spin around in their personal cubbyholes allowing you to view them from every angle – the epitome of magic.

The ghost of Kate Moss from The Widows of Culloden (Autumn/Winter 2006) Collection – a tribute to those who lost their husbands in the Battle of Culloden.

As you leave the grandeur of the cabinet of curiosities, a simple blacked-out room soon follows as the sound of John Willimas’ soundtrack to Schindler's List (1993) begins to play. A miniature Kate Moss figure appears in the middle of the room, dancing in mid-air. Inspired by Loie Fuller’s 1891 dance, Moss wears a long silk organza dress that flows delicately as she moves and slowly rotates to the music. After a few minutes she gradually reduces in size and fades away, leaving a cluster of twinkling stars before disappearing into darkness. As used in the finale to McQueen’s The Widows of Culloden collection in 2006, what looks like a hologram of the supermodel is actually a‘Pepper’s Ghost’ - an optical illusion that was widely showcased in theatrical productions of the 1800s. The illusion is named after the scientist John Henry Pepper who promoted the technique whereby angled glass (invisible to the viewer) reflects images produced off stage. The result is eerily haunting and stunningly beautiful. 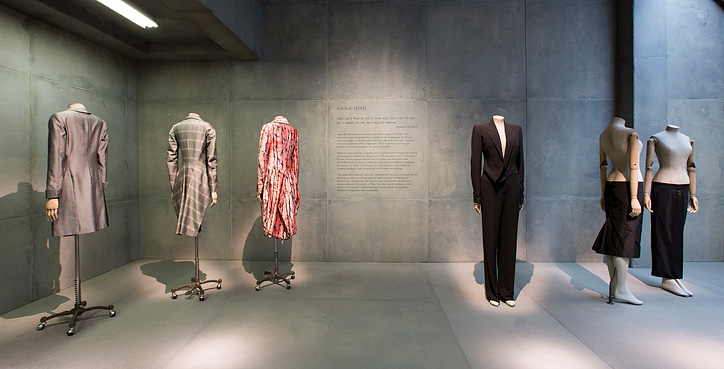 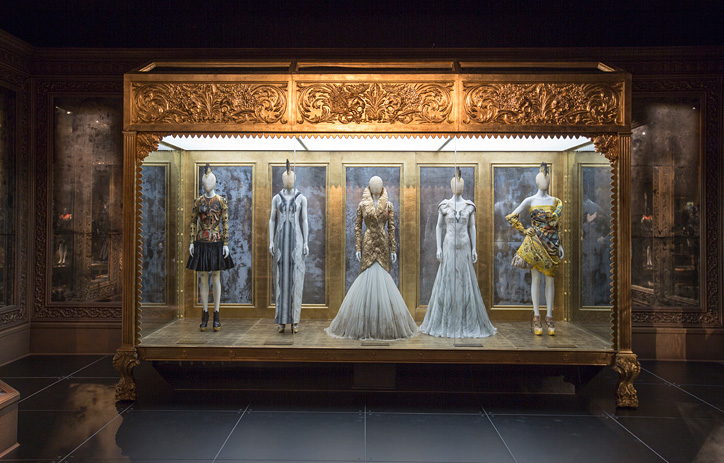 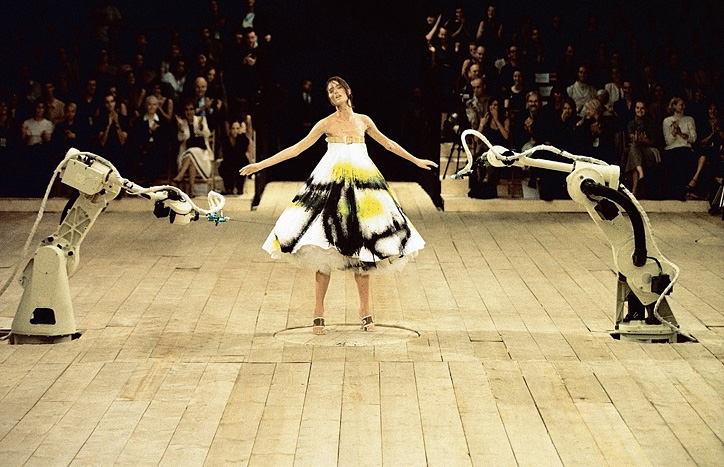 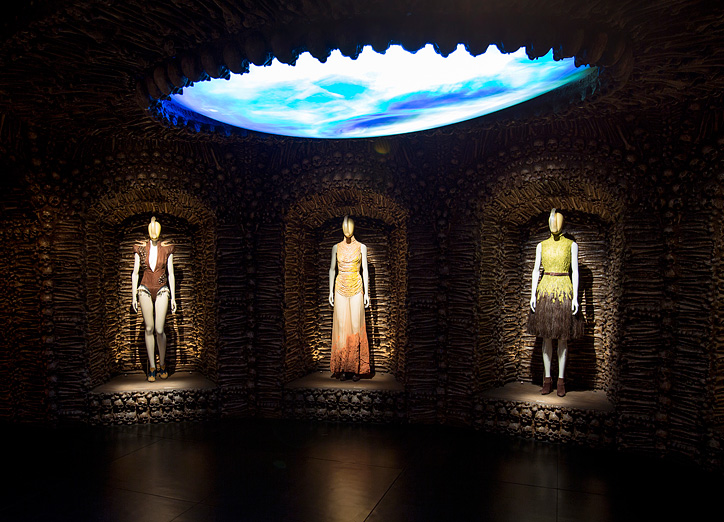 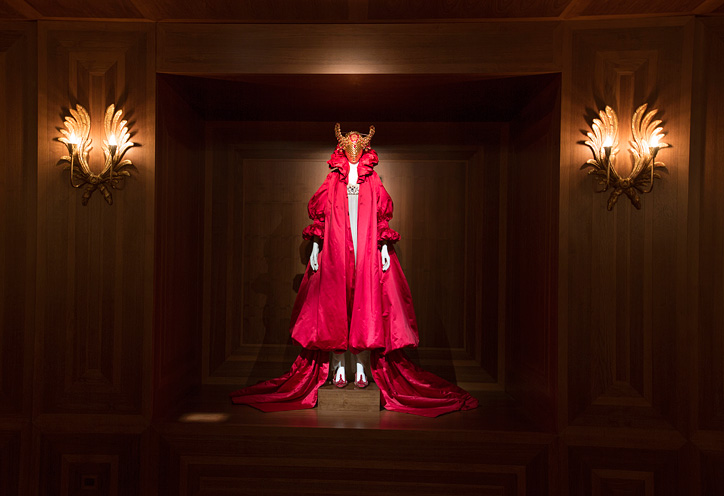 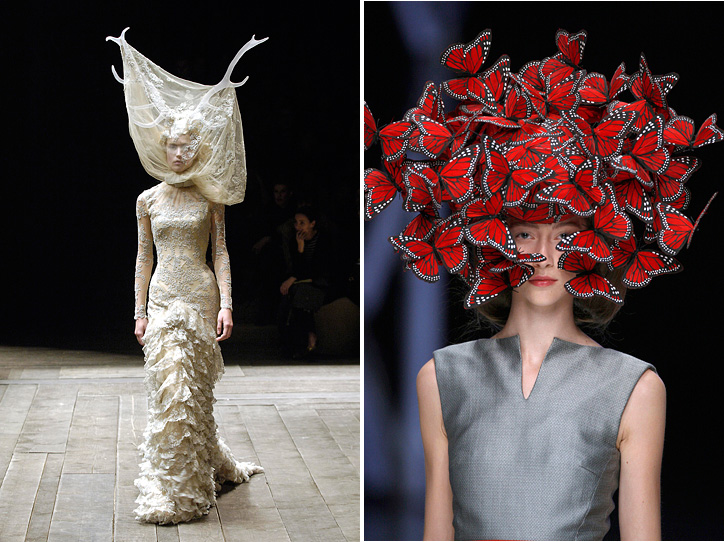 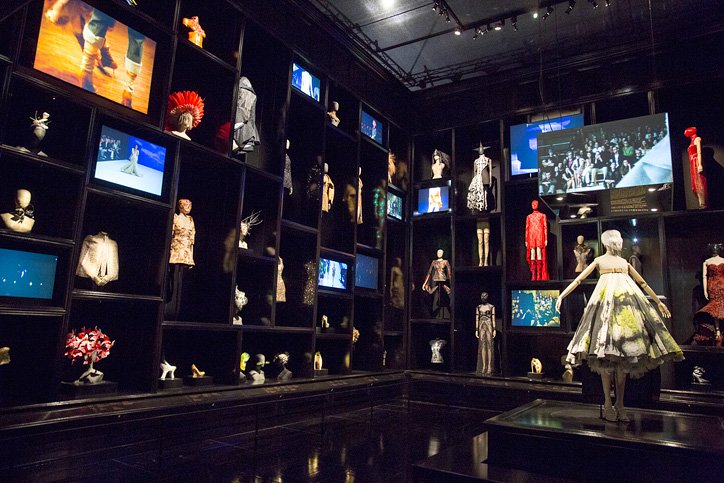 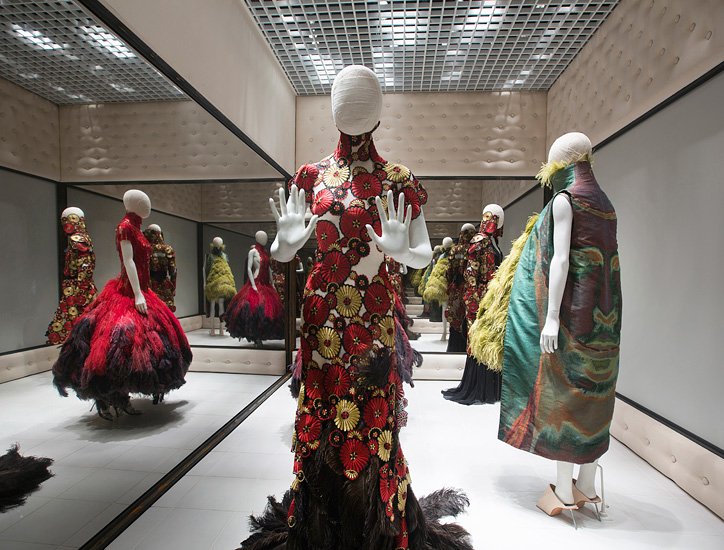 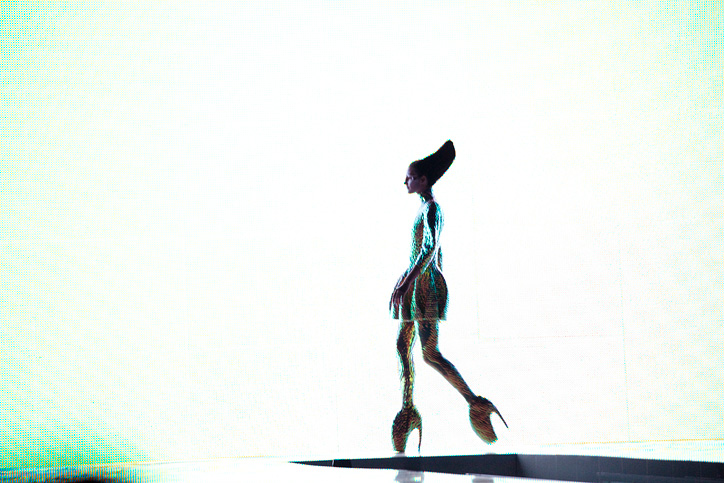 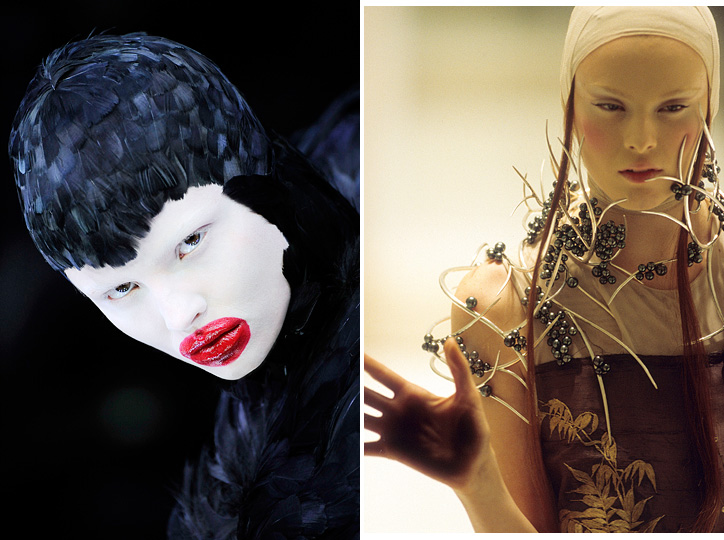 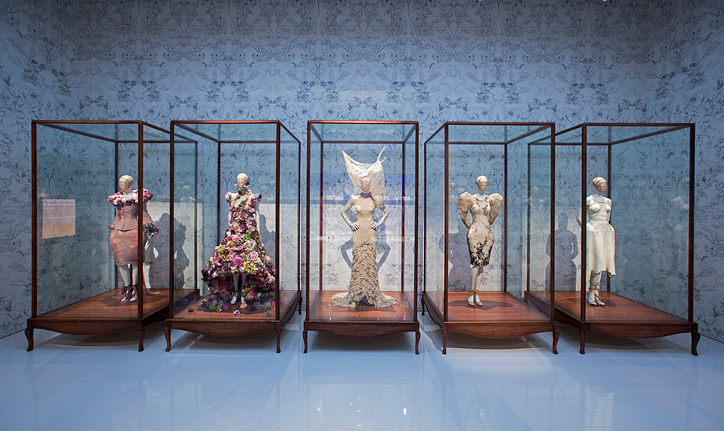 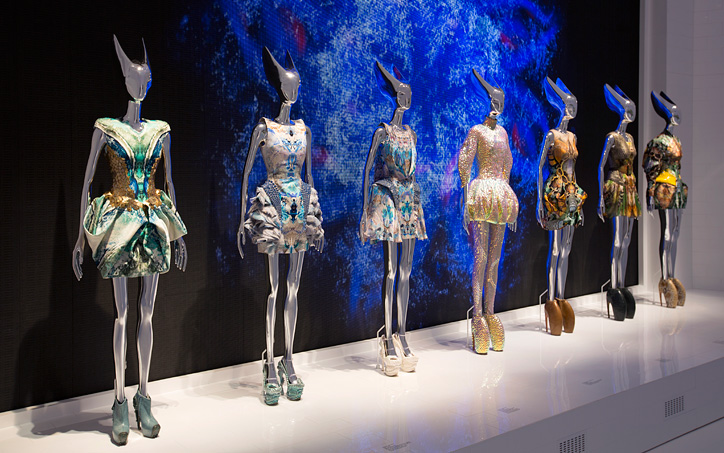 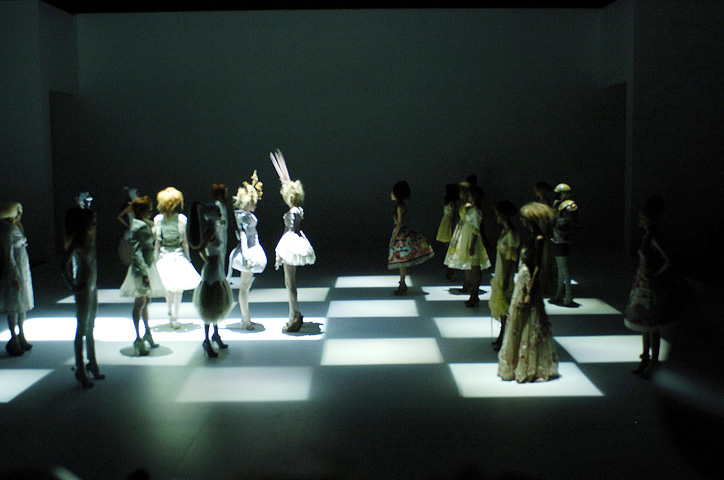 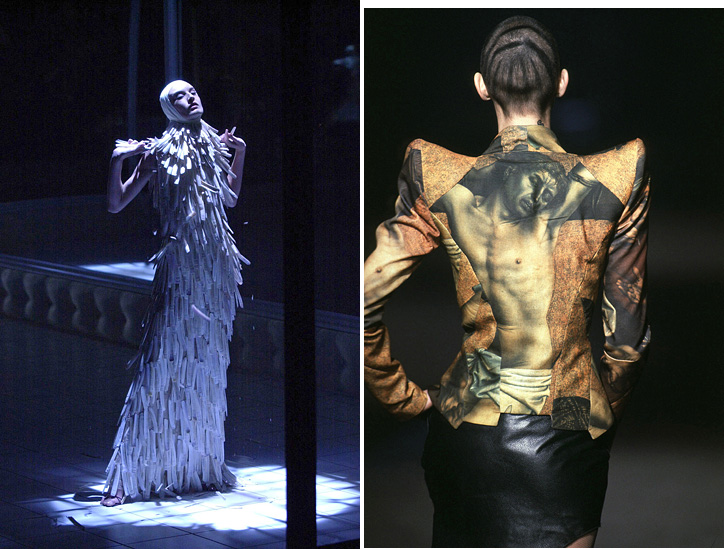 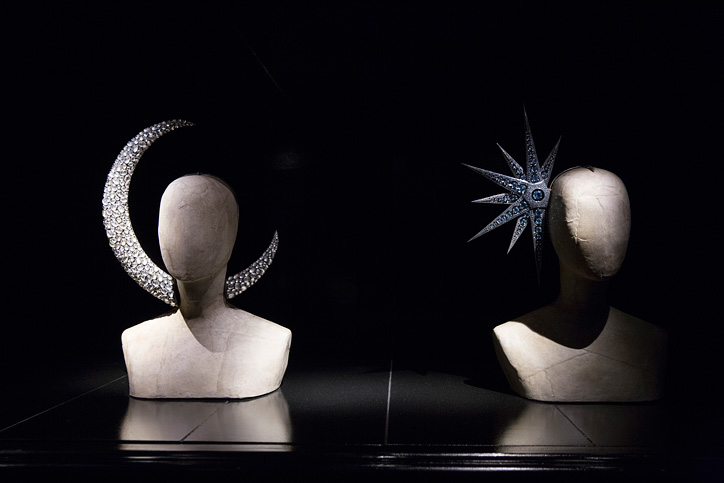 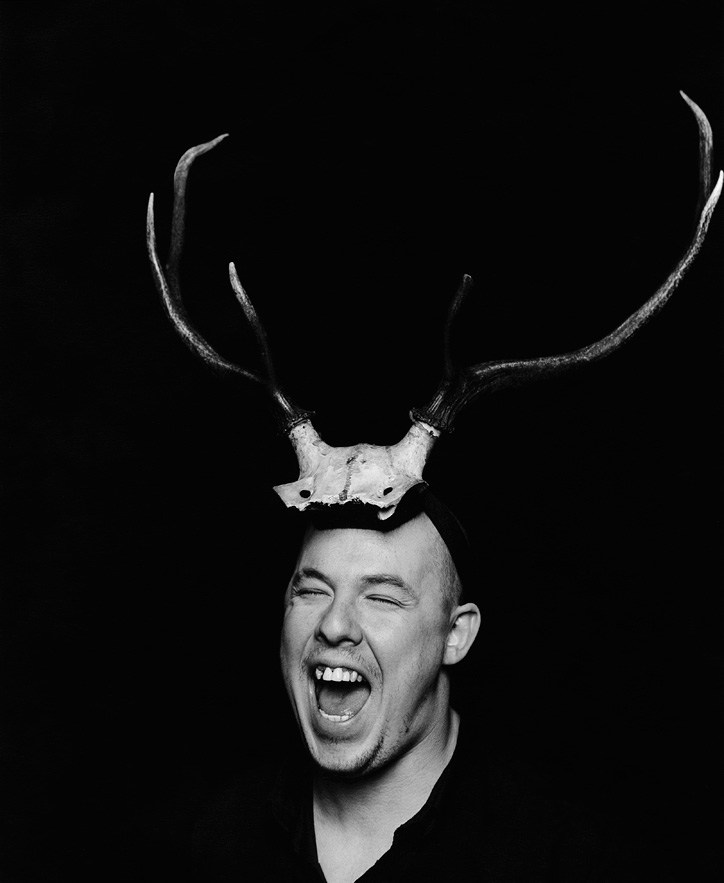