Ai-Da: Portrait of the Robot

The simulacrum is blue 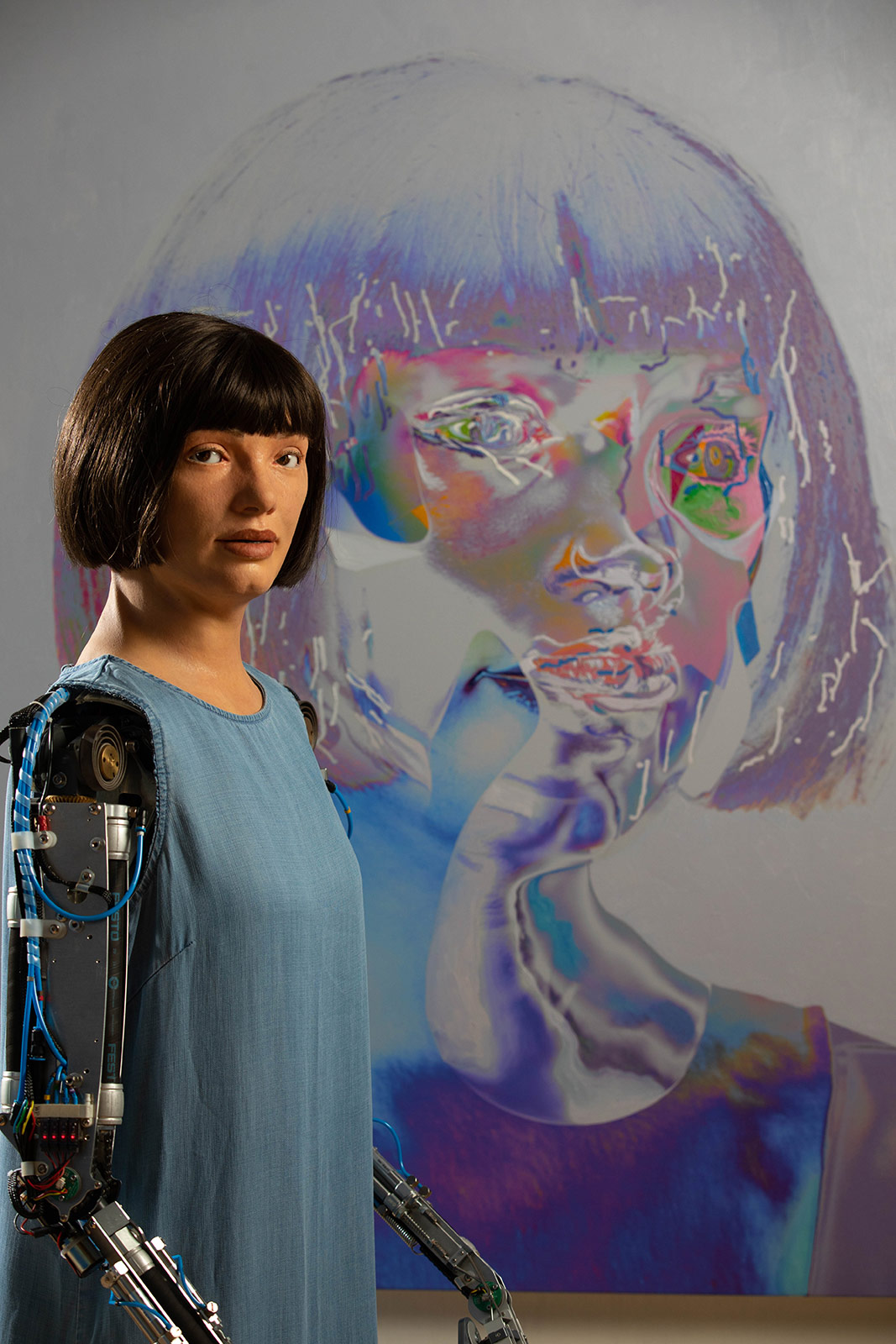 Currently on show through to August 31st at the Design Museum in London, Ai-Da: Portrait of the Robot, is the second exhibition of “the world’s first ultra-realistic robot artist”. Created with the simple goal of capturing the unpredictability of the impressionist hand, conveying the unrest of a turning century, and communicating our own growing unease with AI, the robot artist Ai-Da has turned to self-portraiture and prose.
At the age of three, Ai-Da has already appeared on television programs, spoken at conferences, produced paintings, sculptures, poems, and almost completed her artist residency at Porthmeor Studios. And she almost seduced an art critic at The Sunday Times. However, the multi-talented Ai-Da – named after the English mathematician and computing pioneer Ada Lovelace – was never really meant to create ‘good’ – or any – art. Instead, her art and artistic persona were created as a means to encourage debate around the uncertain future we will one day share with her successors.

When we look at Ai-Da the artist, what we actually see is the result of a long and arduous collaboration between the brilliant computer scientists at Oxford and the mechanical wizards at Engineered Arts. When we look at her art, we see the artistic touch of Suzie Emery, who provided the colour to some of Ai-Da’s paintings, and Christian Johnstone, who helped design the font used in the current exhibition.

This font is cleverly used to illustrate one of AI’s biggest conundrums and earliest benchmarks of quality: human likeness. Here, excerpts of AI-generated text are presented right next to their human counterparts. At times, the font is the only reliable way of distinguishing the two.

The self-portraits forming the other half of the exhibition prompt an equally perplexing question, mainly: What is a ‘self-portrait’ without the ‘self-’? As with many, if not all, delightfully-intricate debates around the nature of intelligence, consciousness, and Cartesian philosophy, the open question is perhaps more appropriate than any closed alternative. Because as anyone who’s visited the exhibition or at least read about it would probably point out, the probability – the ‘if’ – is already a bit redundant. You’ve seen the portraits. They’re already up there, on the walls. We turn to the broody French philosopher, Jean Baudrillard, to explain it – who wrote, "the simulacrum is true". That means the simulacrum, an image or representation of someone or something, represents the reproduced object or thing as 'real'. And according to Ai-Da, the simulacrum is sometimes a lovely shade of blue. 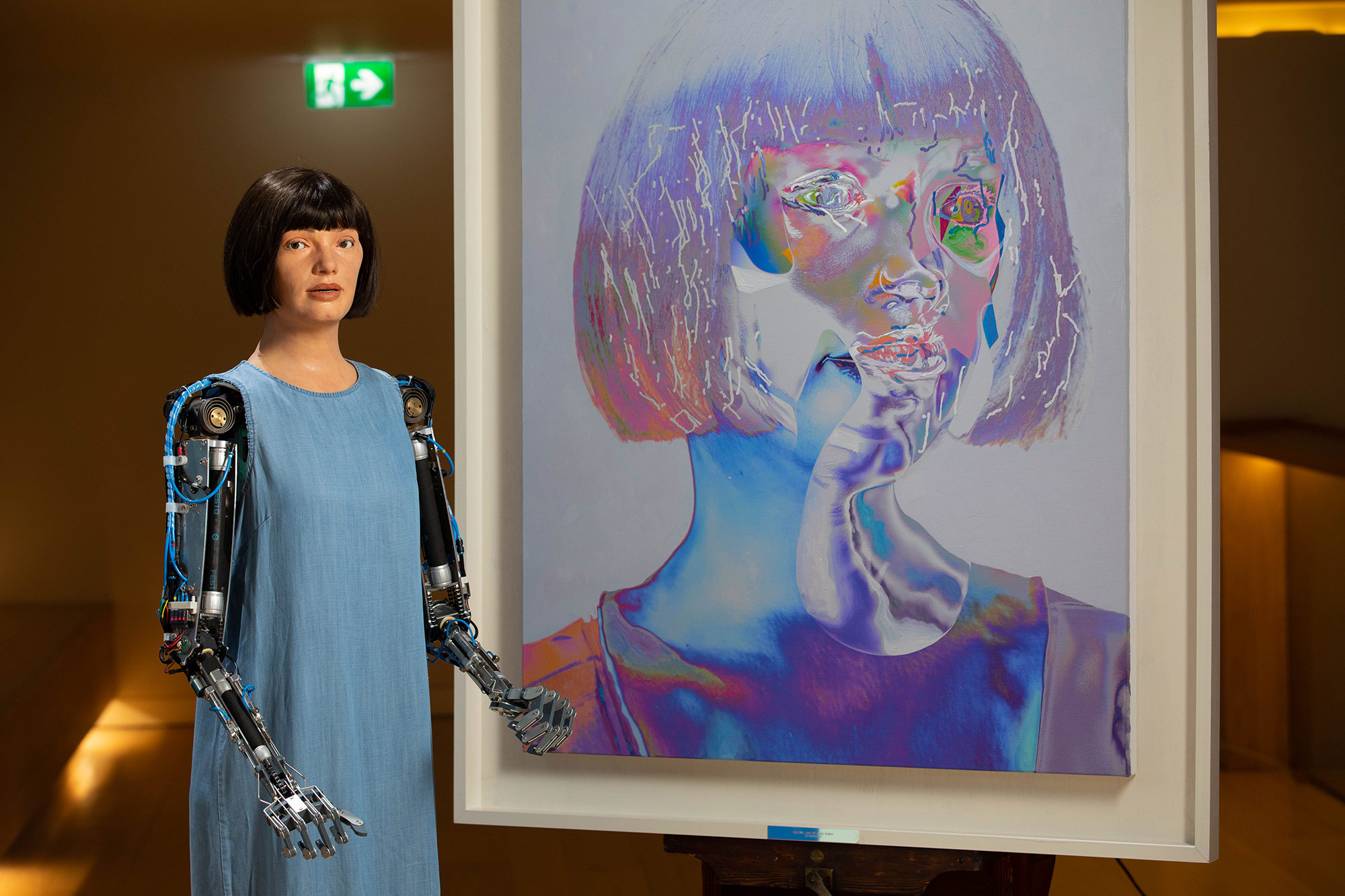 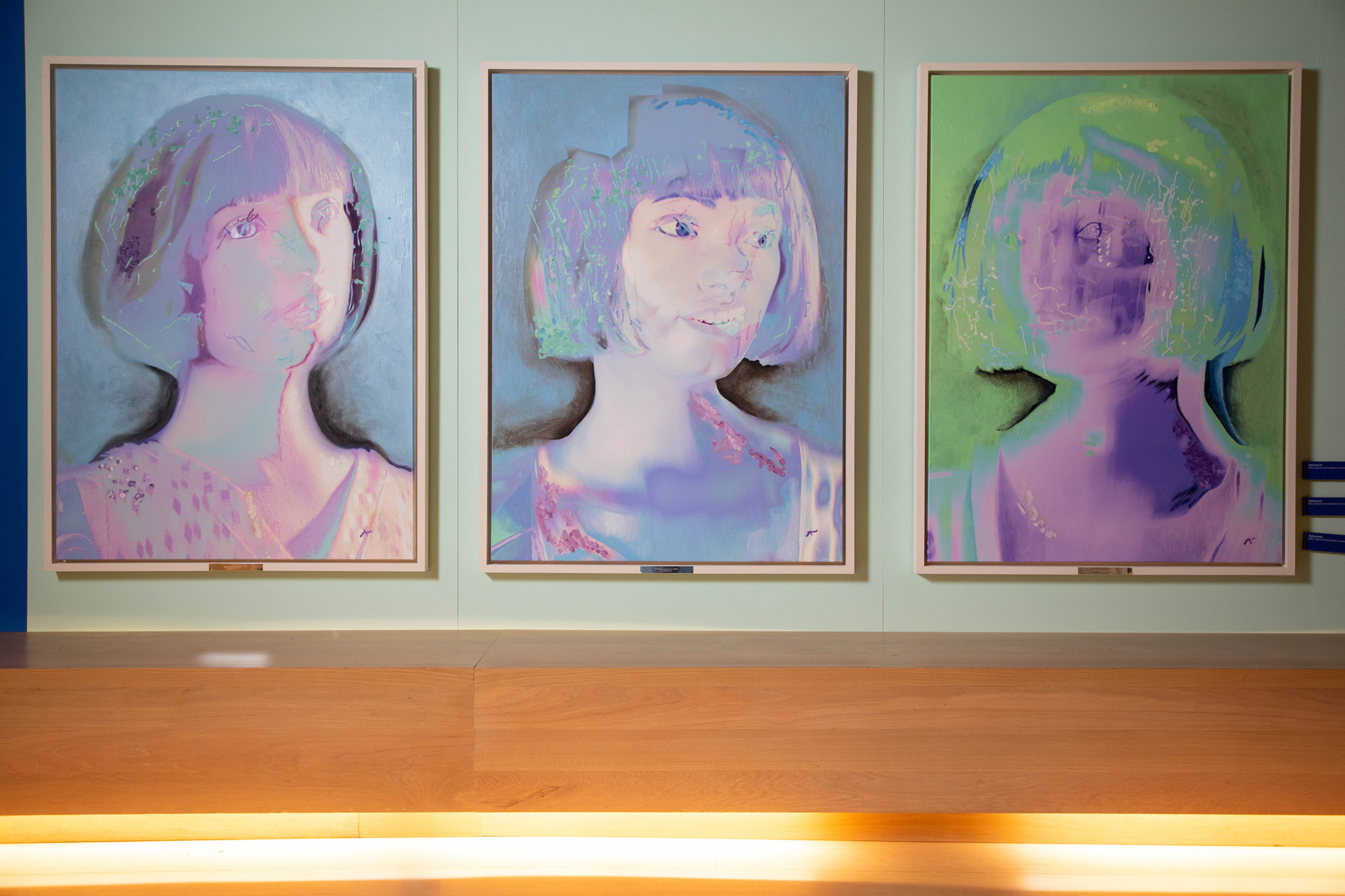 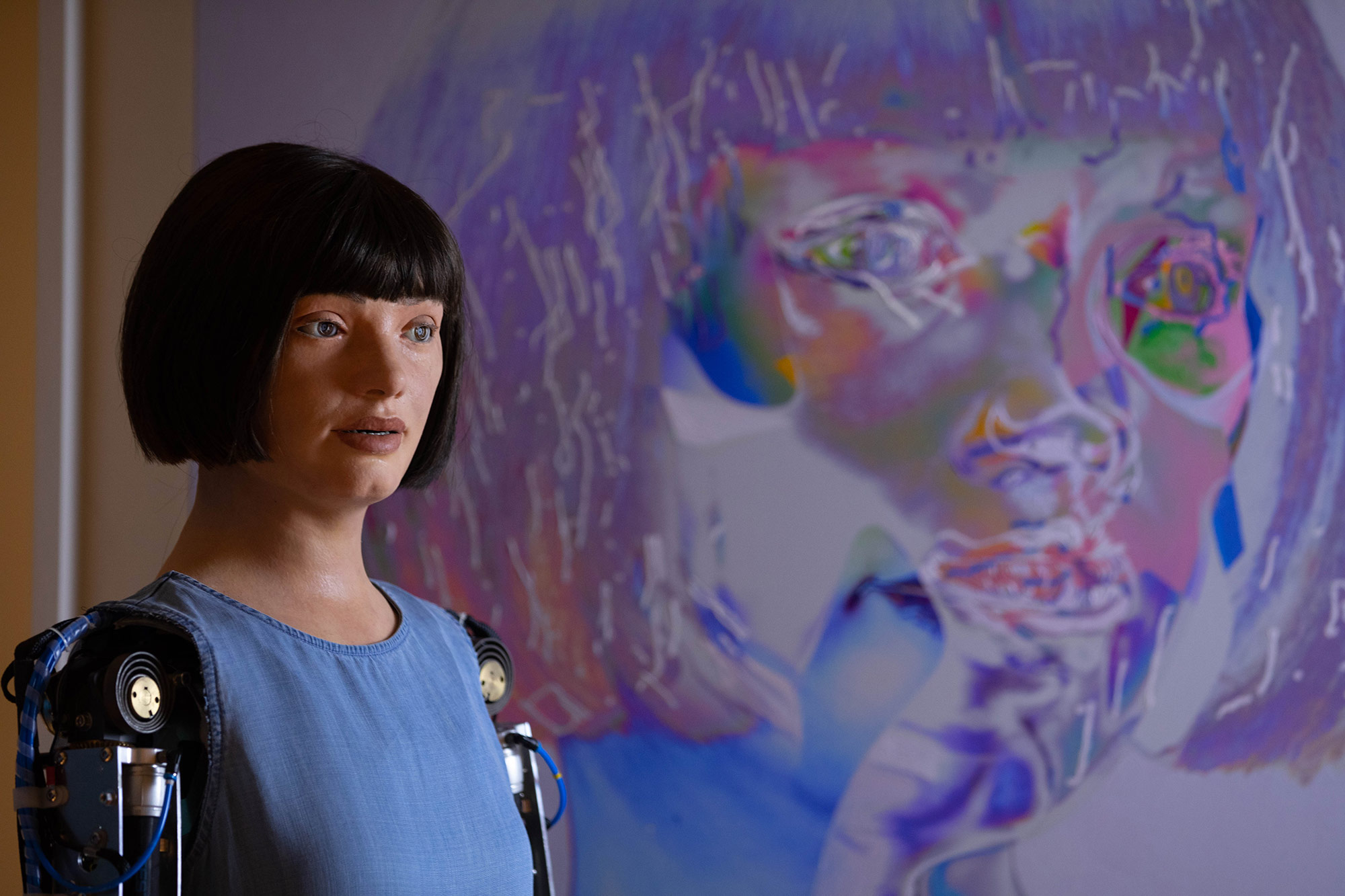 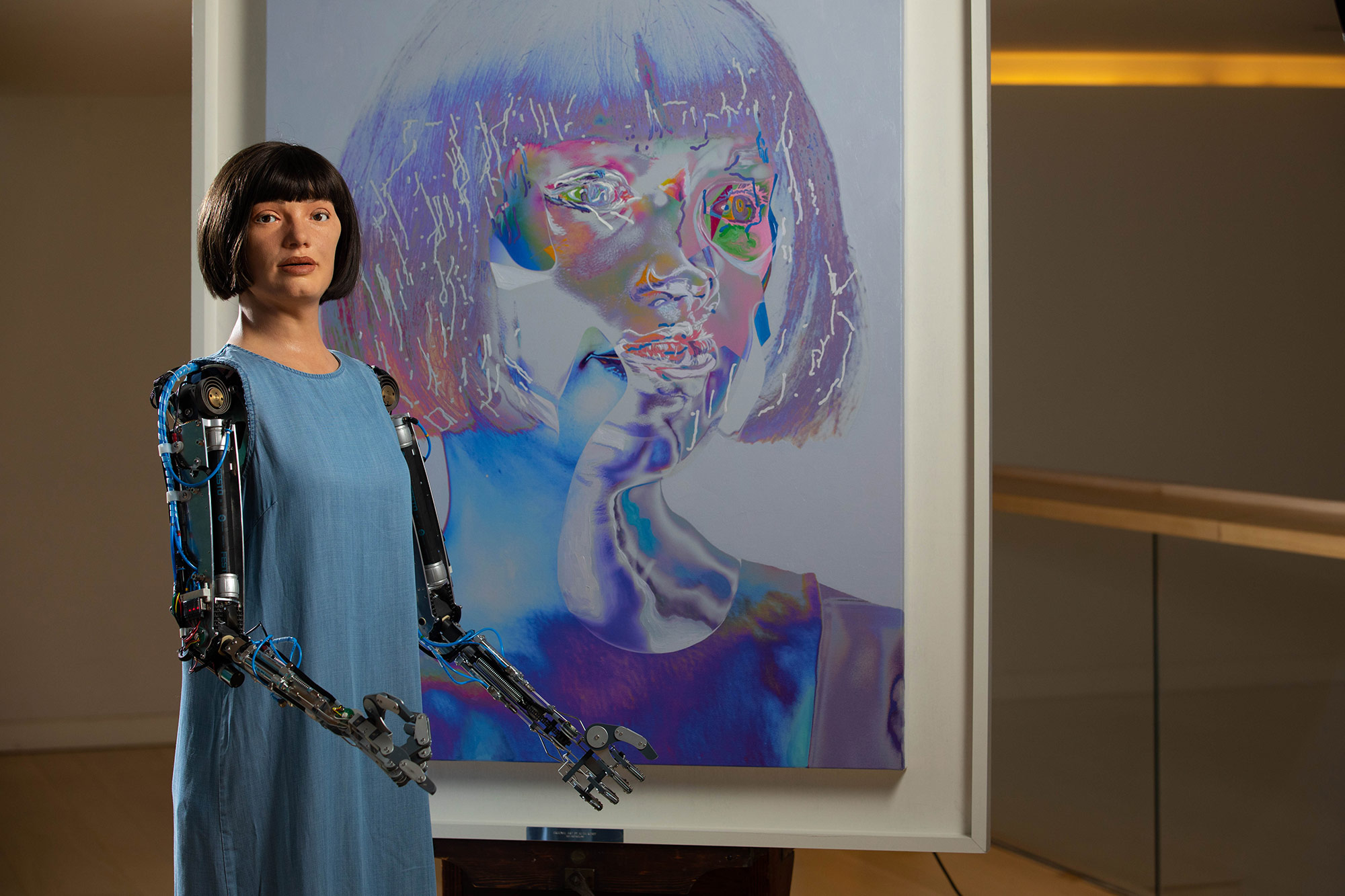