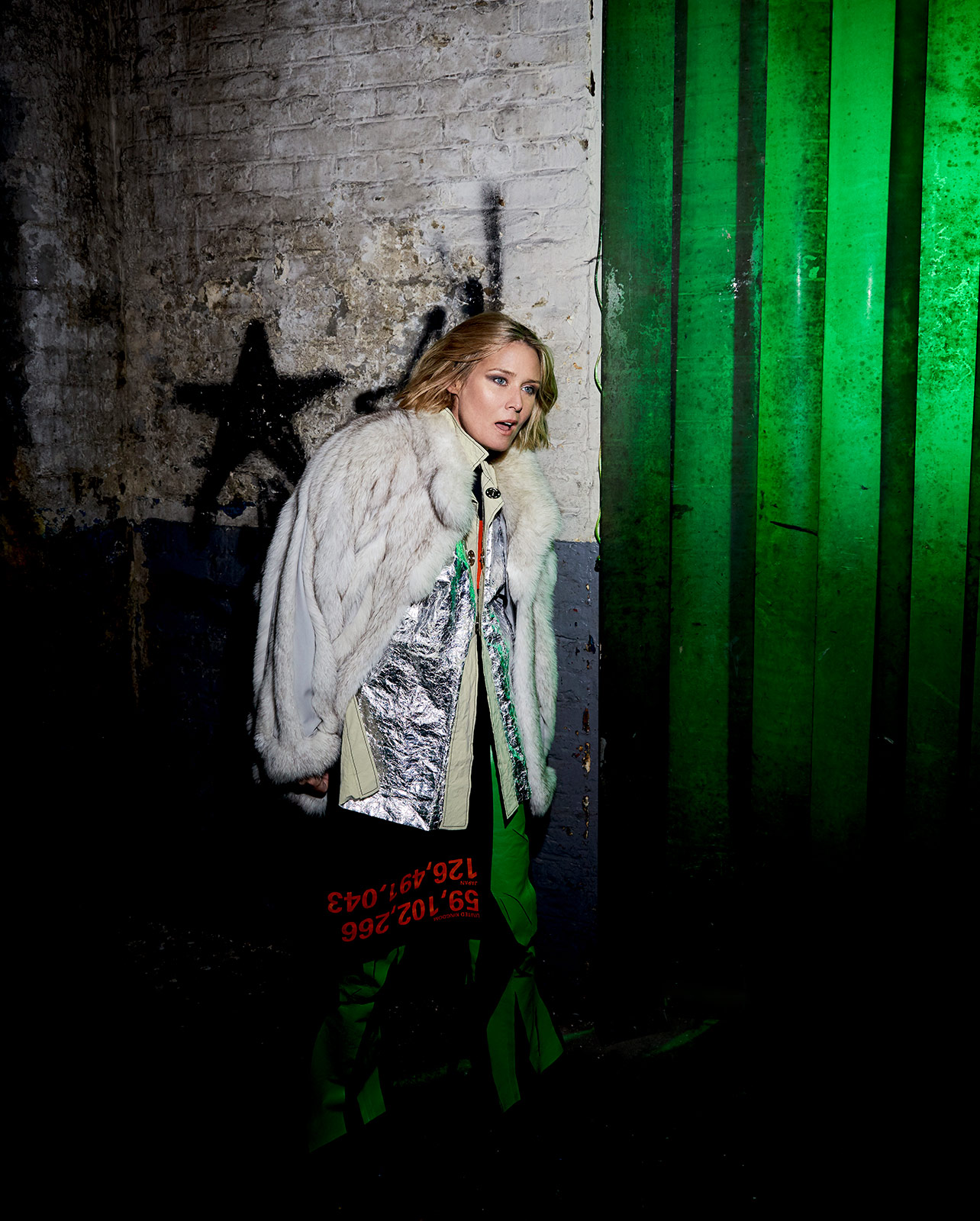 Our favourite Irish artist returns with even more summer tunes. Released monthly (more or less), Róisín Murphy looks back to her roots for inspiration. Four 12” – eight tracks in total – released digitally and on vinyl by the Vinyl Factory feature her quintessentially husky voice, and reach new levels with stinging bass and groovy guitars. She takes time out of her busy schedule for a phone chat about her new music, countless creative outlets, raves, and Japanese rollercoasters.

So Róisín, we’re really excited to talk to you! Thanks for taking the time out to speak to us. I’m a huge fan; I saw you at Glastonbury in 2016 and loved the performance.
You’re very welcome!
We also really love your new music. It has a real summery sound that’s perfect for festivals. You’ve got quite a few festivals lined up for the rest of the summer and just played at Somerset House’s Summer Series. It’s such a beautiful location, how did the crowd react to your new music?
It was lovely, yes. My children came too, which was great. The audience was lovely and very chilled, the music was pumping, and they really enjoyed it. The first half of the set is pretty closely dedicated to the new stuff and it gets going really quickly.
So let’s talk about your new music. You’ve teamed up with Maurice Fulton, house pioneer and producer, to create eight very quirky, eclectic electronic tracks. They’ve got this deep groove and lots of funky guitar riffs. It’s very you, but it’s also quite different. Do you like collaborating with other people, changing it up, keeping it fresh and exploring new realms of sound?
Yes, that’s the great thing about being a collaborator. I don’t make music alone, and if I switch it up, it gives me a whole new sense of purpose and stretches me in ways that the last project didn’t. And on it goes…
Definitely. And you’ve talked about this project’s purpose being to make really authentic dance music – not the genre, but music for dancing. Losing control and just going for it. You’re then releasing your tracks on vinyl, one 12” each month, alongside the digital tracks. It’s kind of like a Róisín Murphy calendar: defining the summer with your music.
It was meant to be one each month but I got very, very tired. I’ve still got to shoot the video for the third one. I’ve had to put it off, so I’m letting Plaything run its course here. Then, in September, I’ll release the next one, Jacuzzi Rollercoaster.
I was going to ask about the tracks’ names, actually, specifically Jacuzzi Rollercoaster. It’s quite unusual. Is there any reason behind this? Is it to explain the sound of the music?
That’s a duet. I co-wrote the lyrics with Ali Love, who also sings on it. The name was his idea – he’s amazing –: he just came into the studio and said, “Do you know what? I just read this thing about this thing called a Jacuzzi rollercoaster”. It’s a real thing in Japan. You sit in a Jacuzzi and then it goes around on a rollercoaster. (Laughs)
(Laughs) That sounds very sloshy, I don’t think they’ll have much water left by the end. So another thing about the new tracks: they’re very upbeat, but also quite melancholic. They seem to be looking back on your past – back to when your head was shaved and you went to raves in Manchester and Sheffield donning sporty outfits. Were you trying to capture this in your tracks?
In the tracks not so much, it’s more of a visual thing. The reason why it’s on four 12”s is because that’s how I rationalised it in the end. We went into it with an open mind, and then just carried on making more music. Only a certain amount of talking with Maurice could be done – as he would say, “Oh, no, I can’t change it because I played it in the club this weekend and it works”. So I thought, well, that’s what this music is for. So that’s how we packaged and presented it: what the concept is. And out of that came the visuals.
It’s really helpful to have a rule for any visual. There was a different rule for Hairless Toys, another for Take her up to Monto, and now we’re in another place again. The rule for these tracks then led to the inspiration for the videos. I began by looking at VHS footage on the Internet from the era when I started to go clubbing. The first music video [All My Dreams] is very much based on my first rave experience, at a place called Shelley’s, in Stoke. I didn’t have to focus on it in terms of music because Maurice was, but the lyric writing really came from an emotional place.
I was going to ask about the lyrics, actually, because that’s where I felt this melancholic aspect is. In All my Dreams, you say, “Friends may become foes, high people follow, new shit can seem so old, real hot to cold’. Then, in Like, you mention “getting clean”, and in Plaything, “just play with me till you get bored”. The music is upbeat but the lyrics seem so personal. Were you looking back to your lifestyle?
I write in the moment. The lyric “get clean, brought up in the middle of a scheme” was because I was writing in Sheffield. Sheffield has one of the most famous housing schemes ever built in the United Kingdom. I used to live in it, in a big block of flats. There’s also a certain amount of darkness in Maurice’s work. In a way, it’s light and bubbly and funky, but it’s coming from such a gut place that there’s an element of darkness there. And that was what I was picking up on in the lyrics.

It does give another layer to the music – there’s so much dance music in the charts these days that just are filled with empty words telling you to ‘get on the floor’ or whatever. Obviously, those are still fun to dance to, but your music has that emotional and personal significance to it, whilst still being great for a boogie.
I think dance music has that capability more than any kind of music – to hold different emotions at once. Well, certainly as much as any other kind of music anyway. But in the environment of dance, there’s a unity that’s created out of all these disparate feelings and emotions between all these different people. They’ve all got different points of view and different histories; they come from different classes, cultures and backgrounds. In a way, there’s a stage there more than other music to really encompass the euphoria, the connection, and the admittance of the disconnection and sadness that’s in life too.
That’s really interesting. I’d really never thought of it like that. Let’s go back to the music videos now. You used old VHS footage to create invitations sent out over social media, asking people to come and be part of your video. I’ve actually applied to be in the next one, I think I saw it on Twitter and thought, why not! (Laughs)
(Laughs) Oh, come on!
I just loved that you advertised it on social media; it means you get real fans that are interested in your music, not actors. People are actually there to have a good time and appreciate it.
Yes, and you can definitely see that on screen. It would’ve been much harder to get that authenticity from hired hand. It was all me, I directed it. But I’m not just directing, I’m going around with my loudhailer and, sometimes, I’ll even break into song. They love it, they get even more loved up. It’s beautiful; it’s actually a beautiful thing.
You said that it was a “rave with a purpose” and invited people to a two-day event at a warehouse in central London. I think I read somewhere that you wanted everyone to look like they were ‘off their nut’, which I loved.
It’s funny, when they actually weren’t off their nut. I was just shouting, “Come on, gurn it off, roll your eyes back!” (Laughs) But also, the other thing you have to get people to remember is not just to show off but also to be in the moment. You see people turn towards the camera, then have to get them to turn back. They need to do natural things like talking to each other and hand each other drinks – not just dance and perform.
The reference material was so wide sweeping. A lot of research went into those little invitation films, editing different footage that I’d found on the net. Then, I developed this character for a voiceover in order to speak to the participants through the invitation films. He’s my alter ego, this northern MC fella. It enabled me to say stuff that I wouldn’t normally say and explain the idea to them before they arrived on set. And they were ready when they got there, so it was great.
You also styled it yourself, right? Using yours and your boyfriend’s wardrobe. You said something about it being a ‘Pandora’s Box’. Gosh, you must have loads of clothes, you kitted them all out. Were the clothes all originally from the ‘90s or was it more of a mixture?
Yes, we have a stupid amount of clothes, and it was mostly from the ‘90s.
You also feature in the videos too, performing. Were you showing the kids how to do it properly?
(Laughs) I didn’t do very much in the first one [All My Dreams]; I was just a shadowy figure, a cameo appearance. It was very personal, so instead, I cast someone as me. The three girls that start the video were really the three of us back in the day – my two friends and me. But the second one [Plaything] is a little further on in the story. It sort of shows what happened when commerce began to get involved. The girls are all on stage, they’re elevated and they’ve separated themselves, so there’s less unity between them and the audience. They’re on a higher level. Which, back at that time, was what people used to do to find jobs inside that world. That’s where it starts to get a little bit darker… 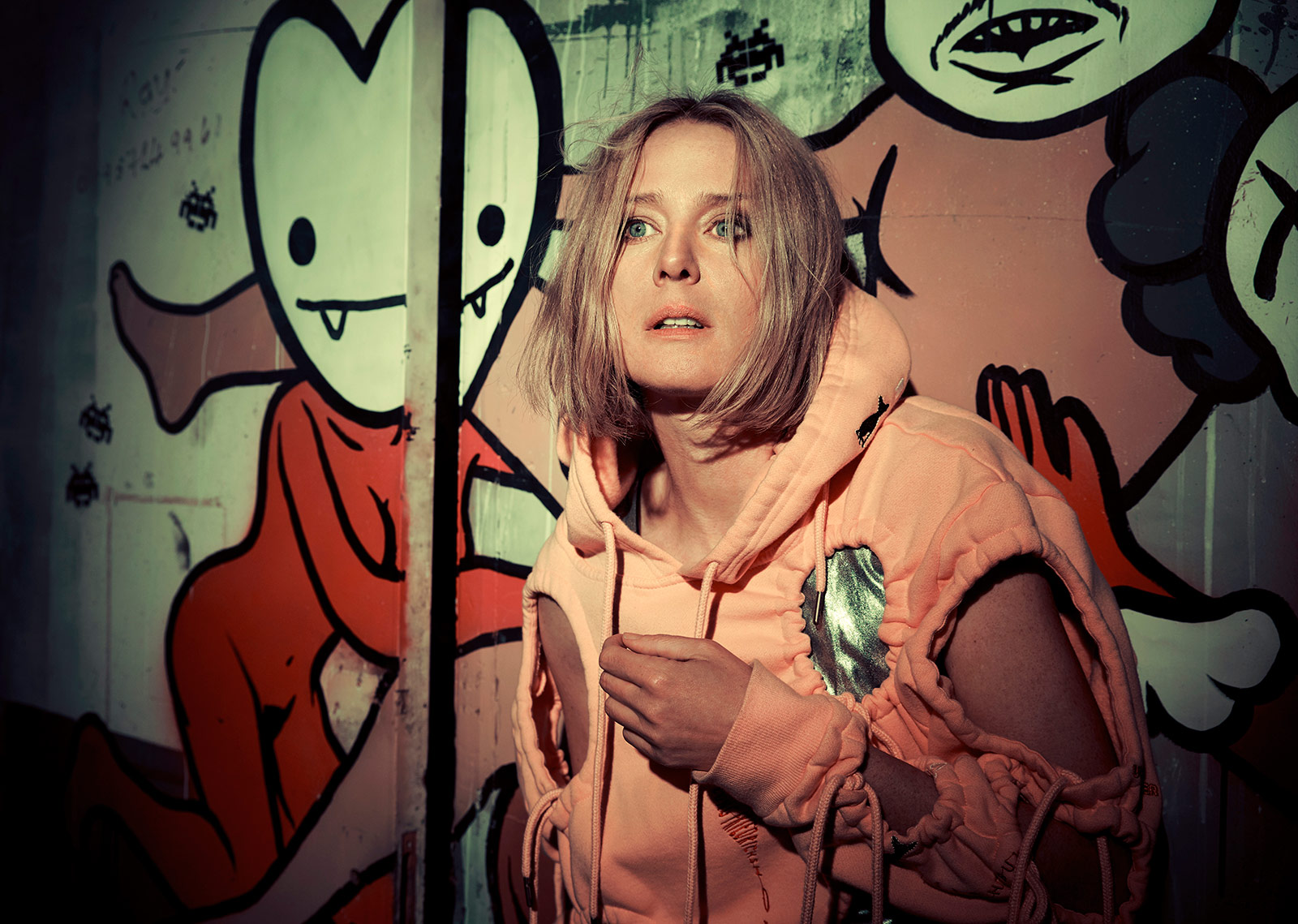