Bring in the honey 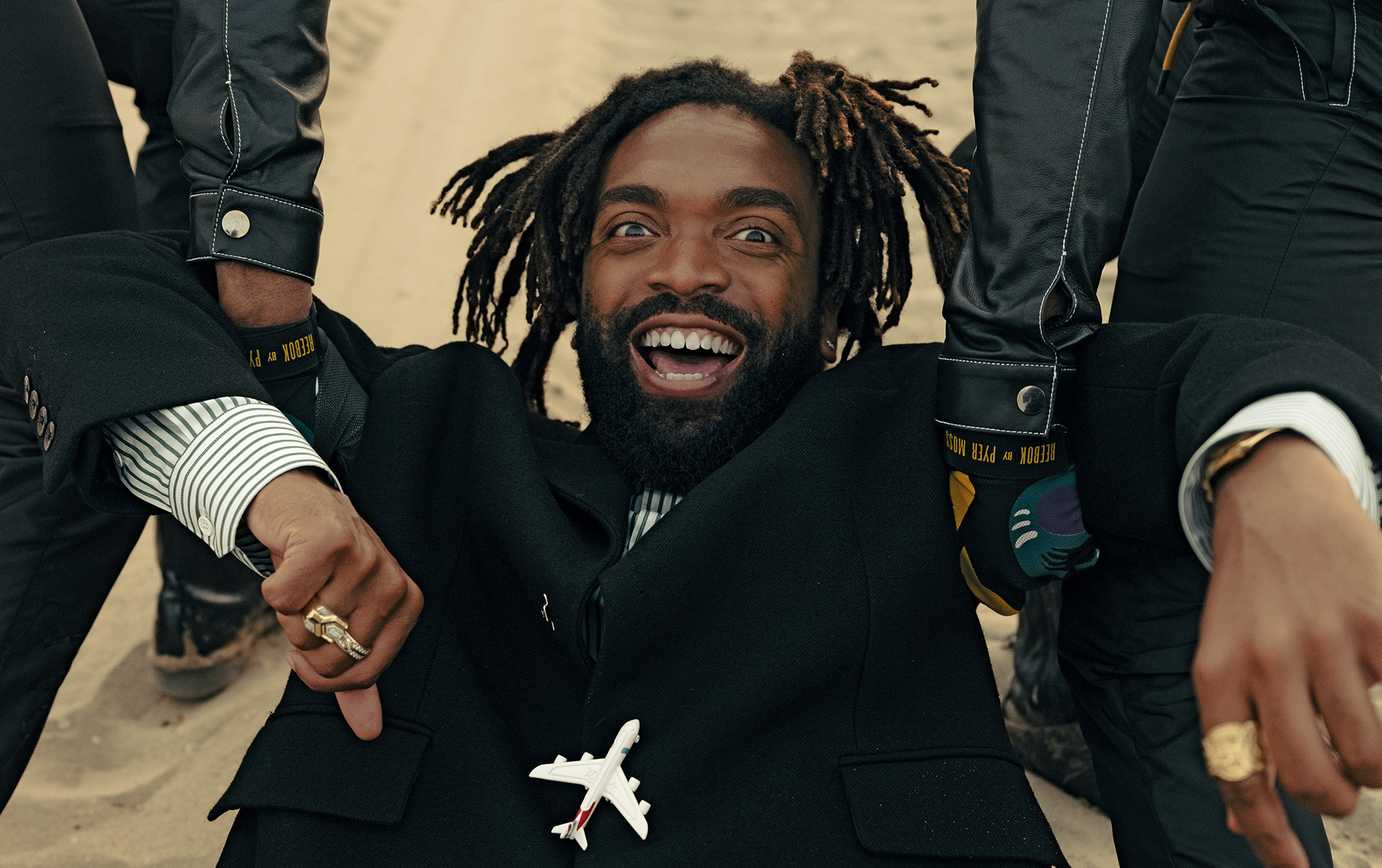 Innovation and authenticity are two defining forces at the heart of Pyer Moss. Founded in 2013 by Kerby Jean-Raymond, the visceral Creative Director uses fashion as a means of translating his personal interests in art, film and politics into luxurious fashion garments – an approach undeniably rendered in his premiere couture collection. Kerby’s work is of rebellion and risk-taking, encapsulating the delicate equilibrium between nostalgic themes and social commentary. Reflecting on the shared experiences of people of colour, collated in his designs, he blends provocative showmanship with exquisite craftsmanship and philanthropy.
Interview tak­en from METAL Magazine issue 45. Adapted for the online version. Order your copy here.
Kerby Jean-Raymond’s debut couture collection for Pyer Moss, Wat U Iz, was recently unveiled as the first Black American designed collection to present at Paris Haute Couture Fashion Week. It was a joyous spectacle, conjuring a wholehearted sense of celebration of community and Black invention. The collection sparked a dialogue akin to a history lesson but injected with an expedient dose of Pop Art humour. Shining a light on twenty-five overlooked inventions born from the minds of Black people, the garments abandoned the usual silhouettes of the brand opting instead for bulbous and quirky forms. Discernable in the designs were Black contributions such as the mop, peanut butter, ice cream, thermal hair curlers and the horseshoe, all found in a list at the US Library of Congress and the Black Inventor Online Museum. The campy surrealism redefined the possibilities of exceptional craftsmanship and the meaning of couture.

With the only woman leader of the Black Panther Party, Elaine Brown, opening the show with a poetic speech, the necessity of mobilisation became ever apparent. The vivacious vocals of rapper 22Gz and the operatic background singers bellowed over the live music soon after, complimentary to the clothes, and elevating what could have been a classic catwalk to a jubilant spectacle, unparalleled in its exuberant atmosphere. Simultaneously tongue-in-cheek and dead serious, the collection gave effect to a steadfast message on the erasure of Black and Brown history as a direct result of whitewashing. Kerby proposed to play with the oppressive structures that have failed people of colour in the past – to not only defy them but also to rewrite them.
In the current social climate, it’s not hard to become disillusioned and disappointed by the work that is being done to amplify Black narratives. However, Kerby managed to create a stimulating fashion event that played with concepts of grandeur and childish cartoon caricatures from animation studios like Pixar and shows like Sesame Street and Teletubbies, whilst maintaining an assured representation of Black narratives.

Kerby’s rich history in New York’s Flatbush serves as a grounding body for his work, imbuing him with an understanding of the real-life consequences of oppression and a solid set of friends that have been by his side since his youth. He is an uncle, brother, designer, cultural commentator, creative director, musician, and human being. He is critical of the oppressive structures that have allowed society to slip into a duality, advocating for imagination and for a world without hate.

He is witty, intelligent, and critical of culture. An empath by nature and an artist by nurture, he offers a key perspective on the state of the world as well as his own identity as a Black man. It can be challenging to move within these spaces, but his ideas have often been to give a loud and clear voice to people of colour. With compassion, Kerby Jean-Raymond is forging the future of fashion. And we’re here for it. 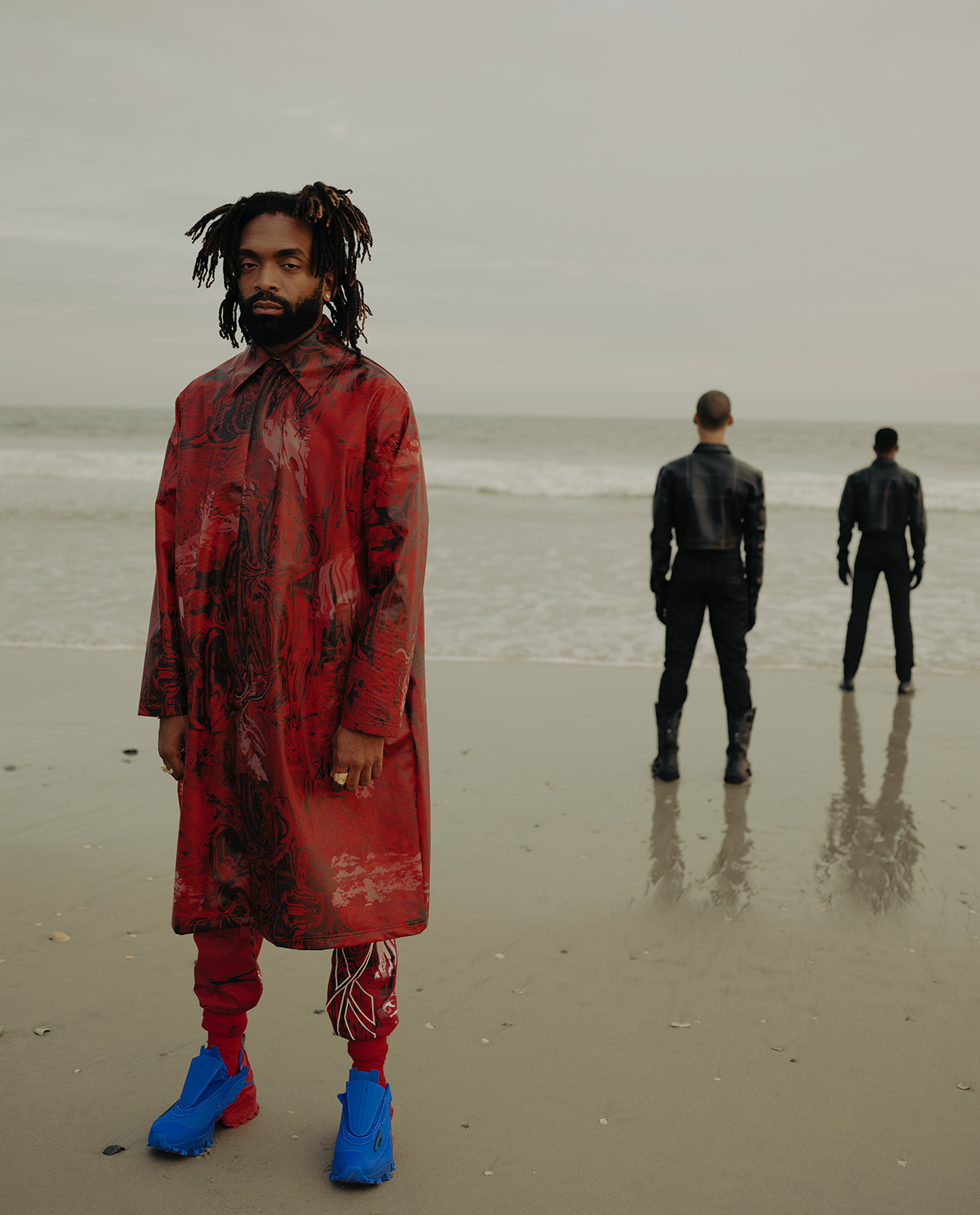 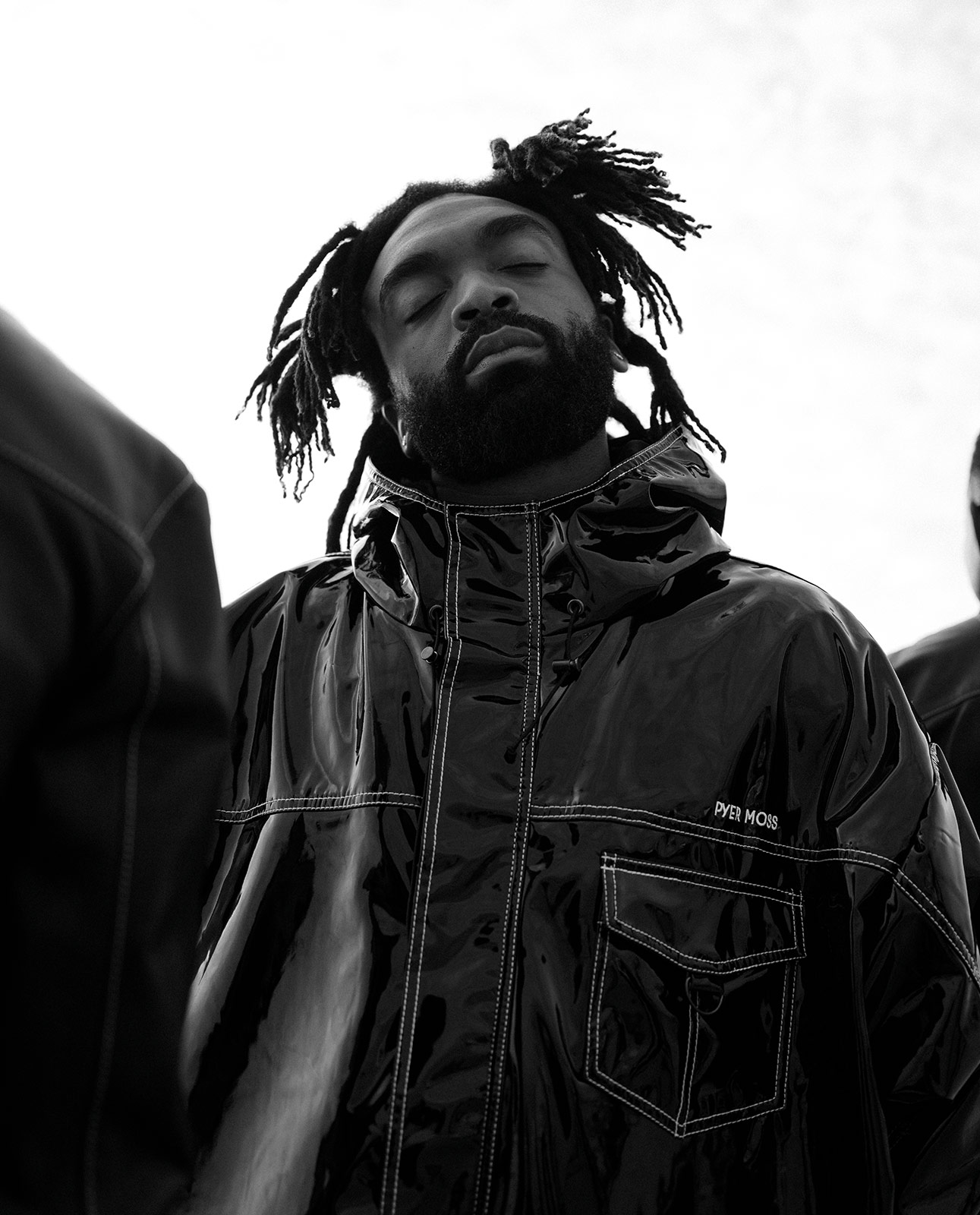 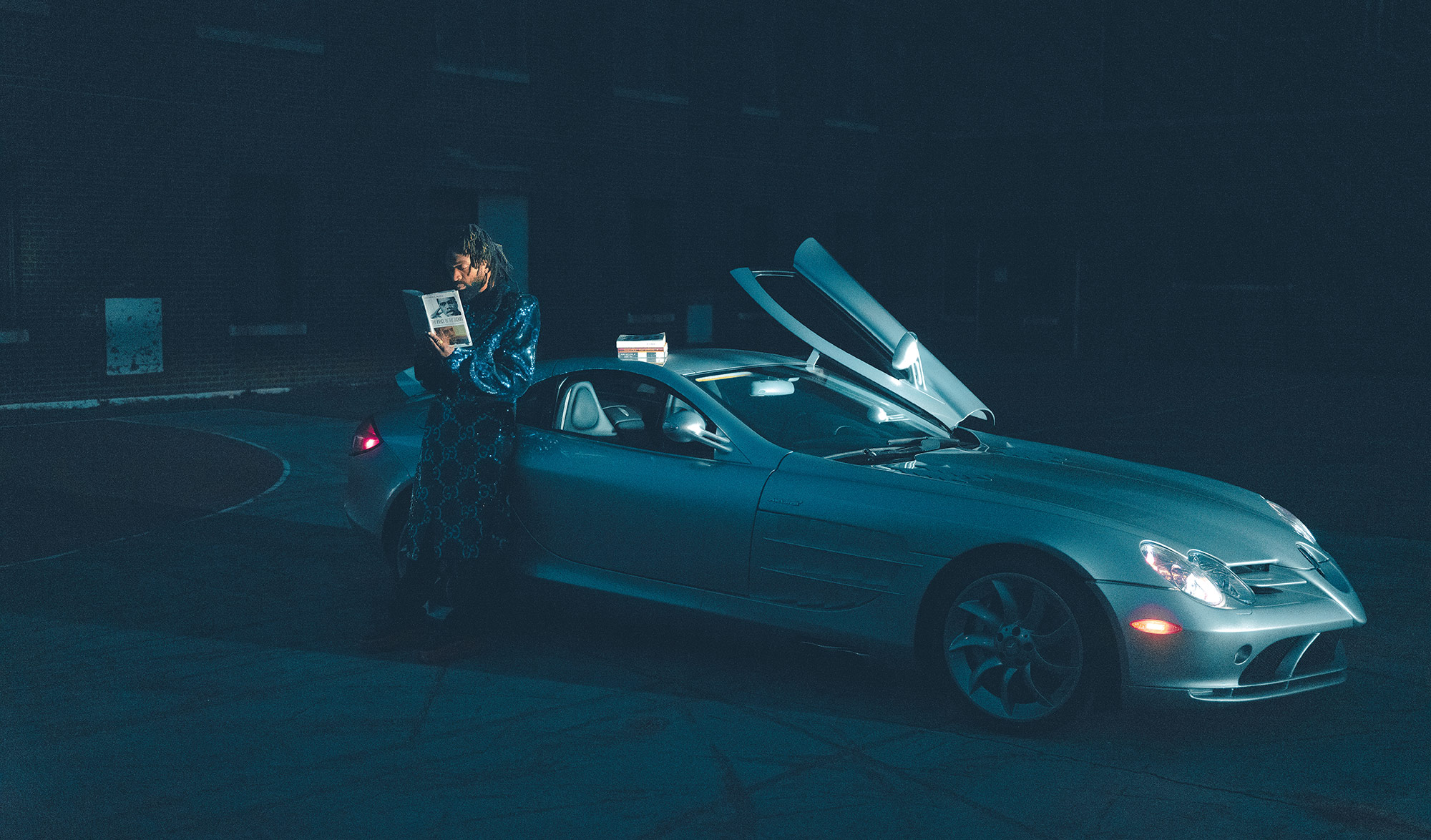 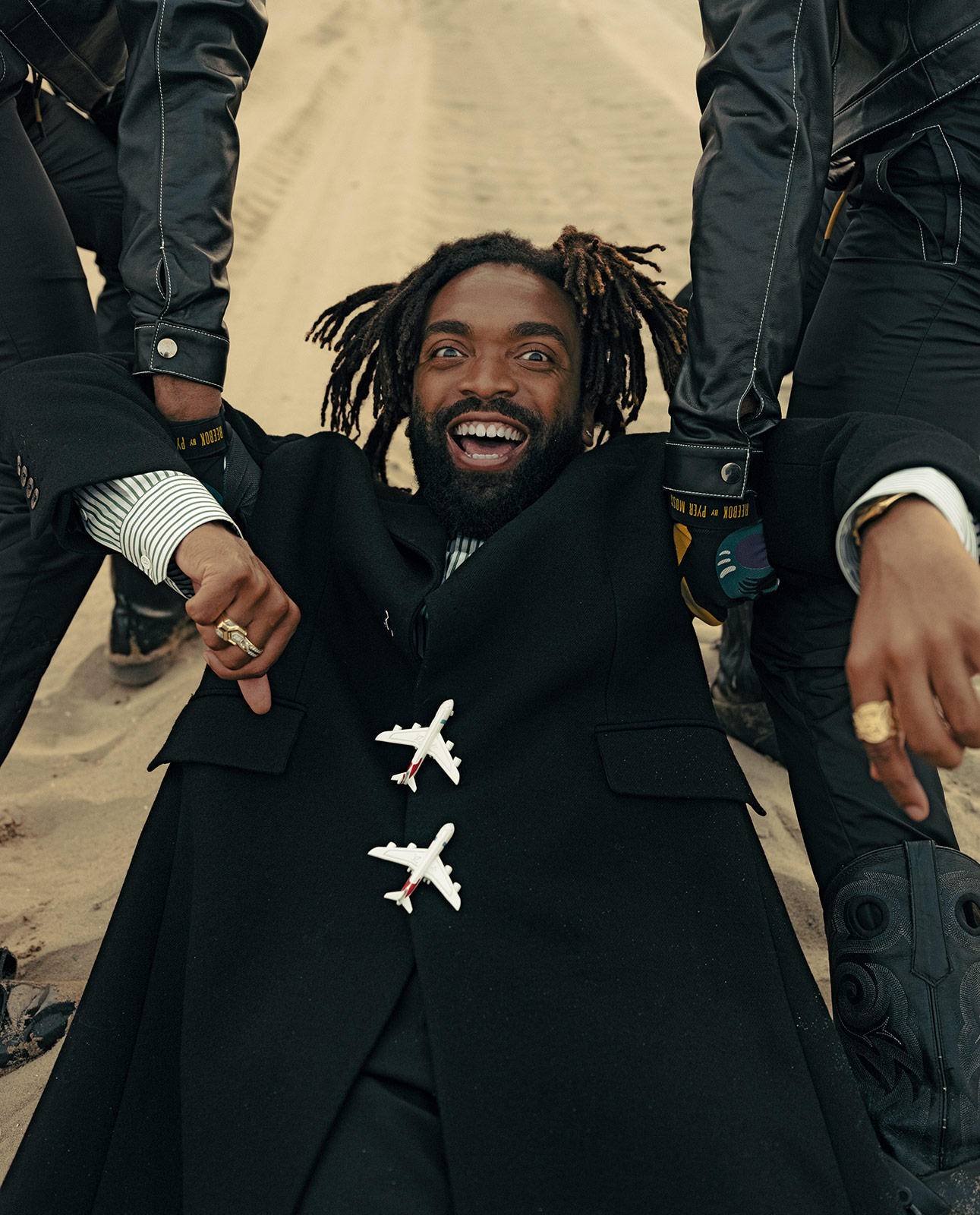 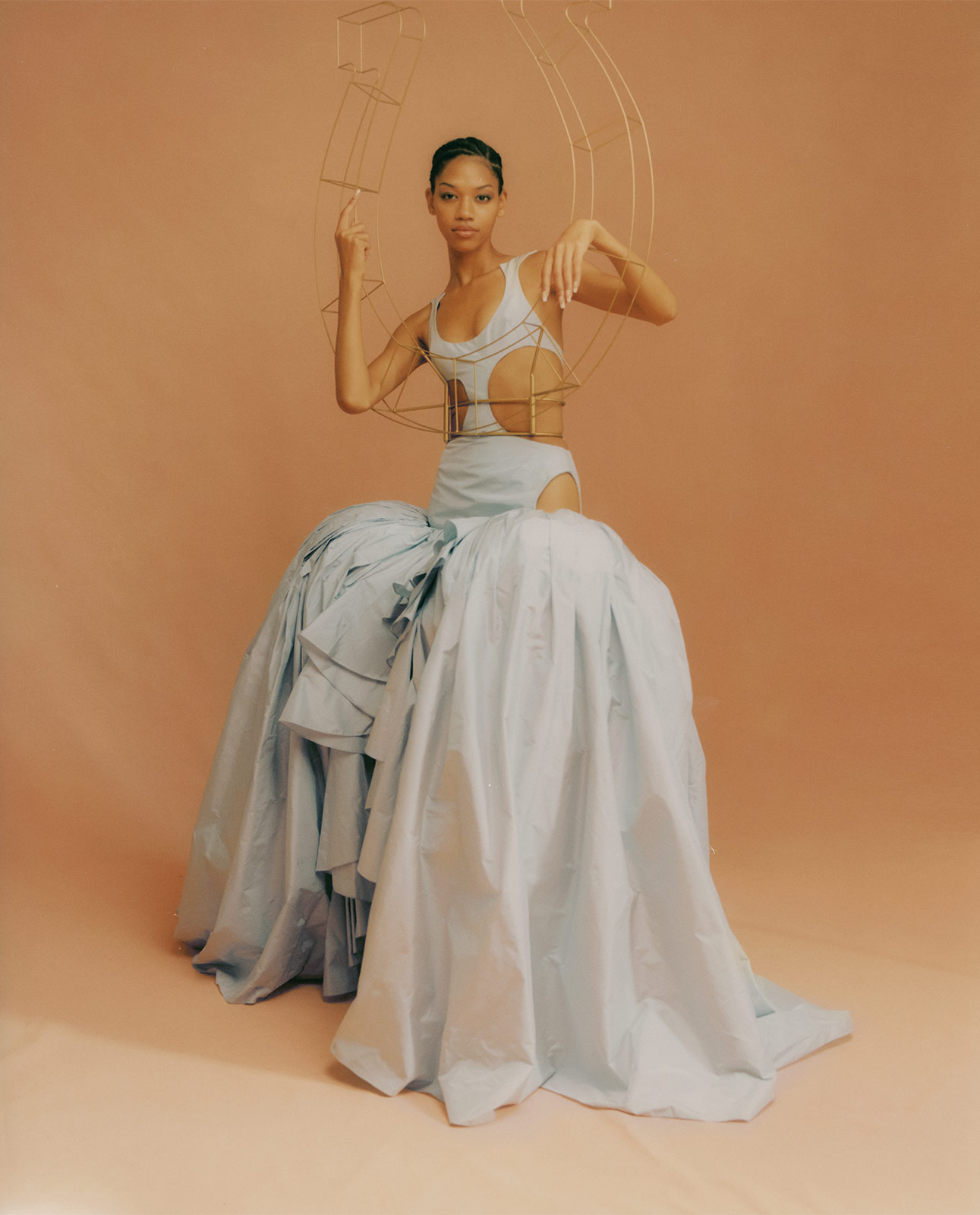 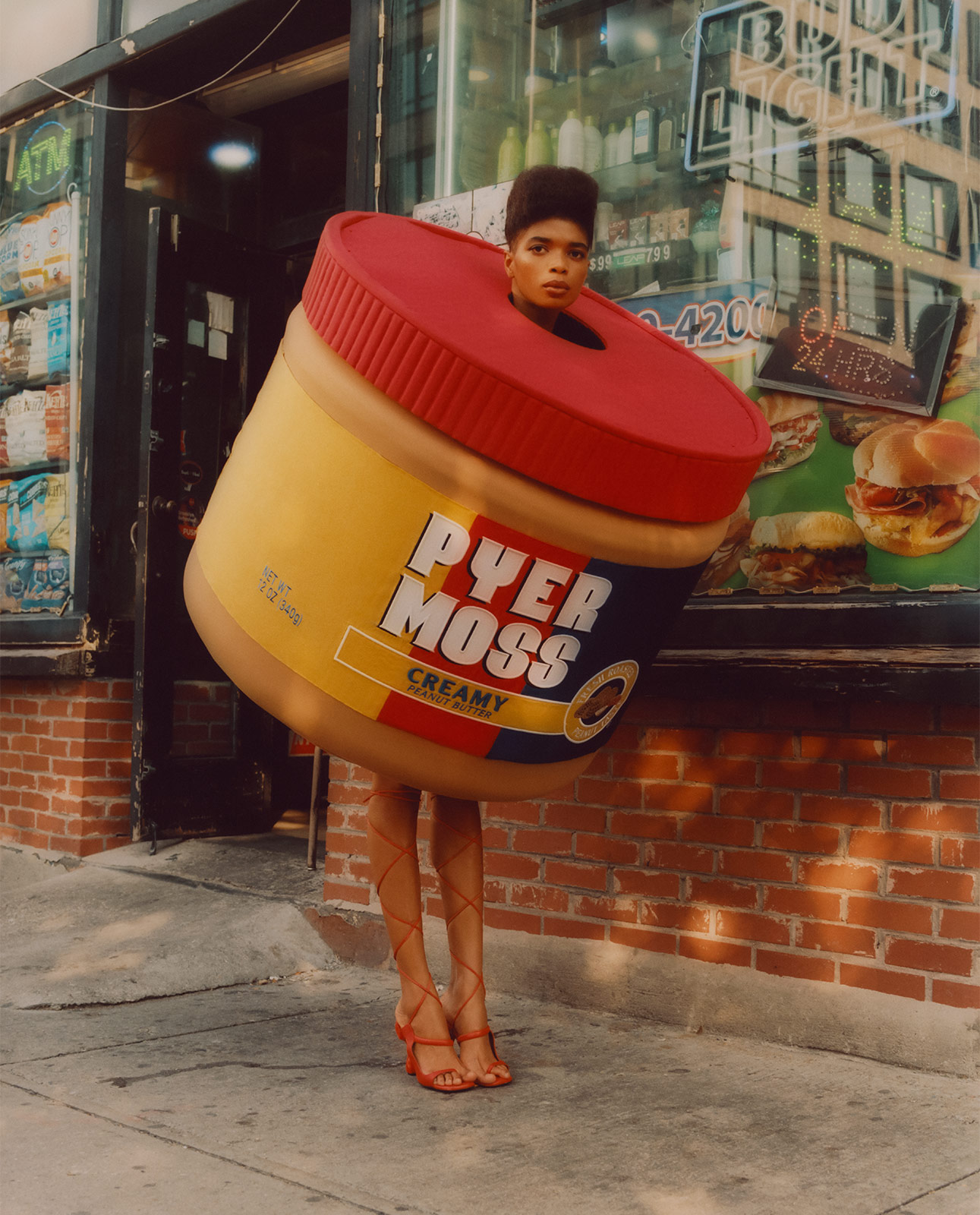 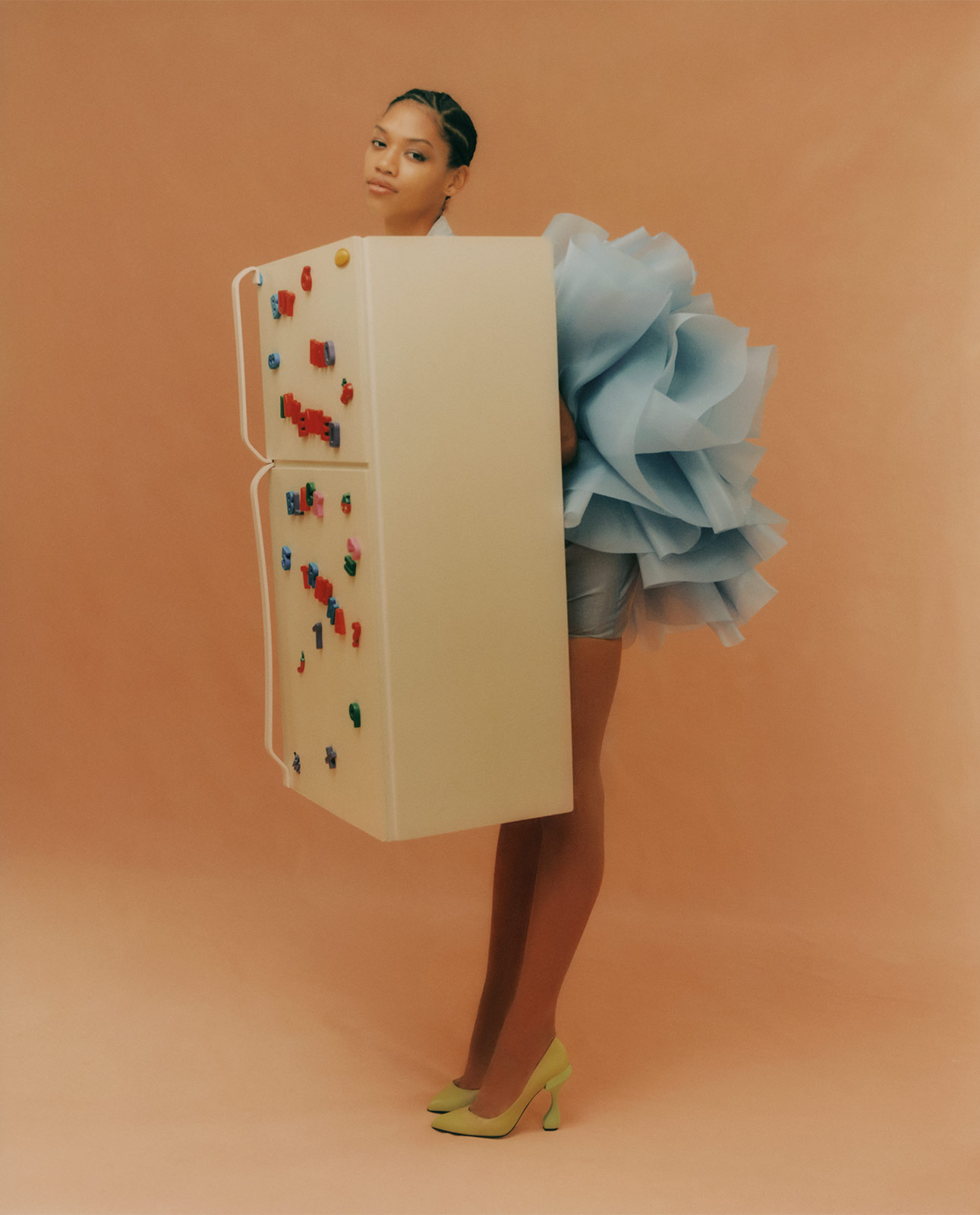 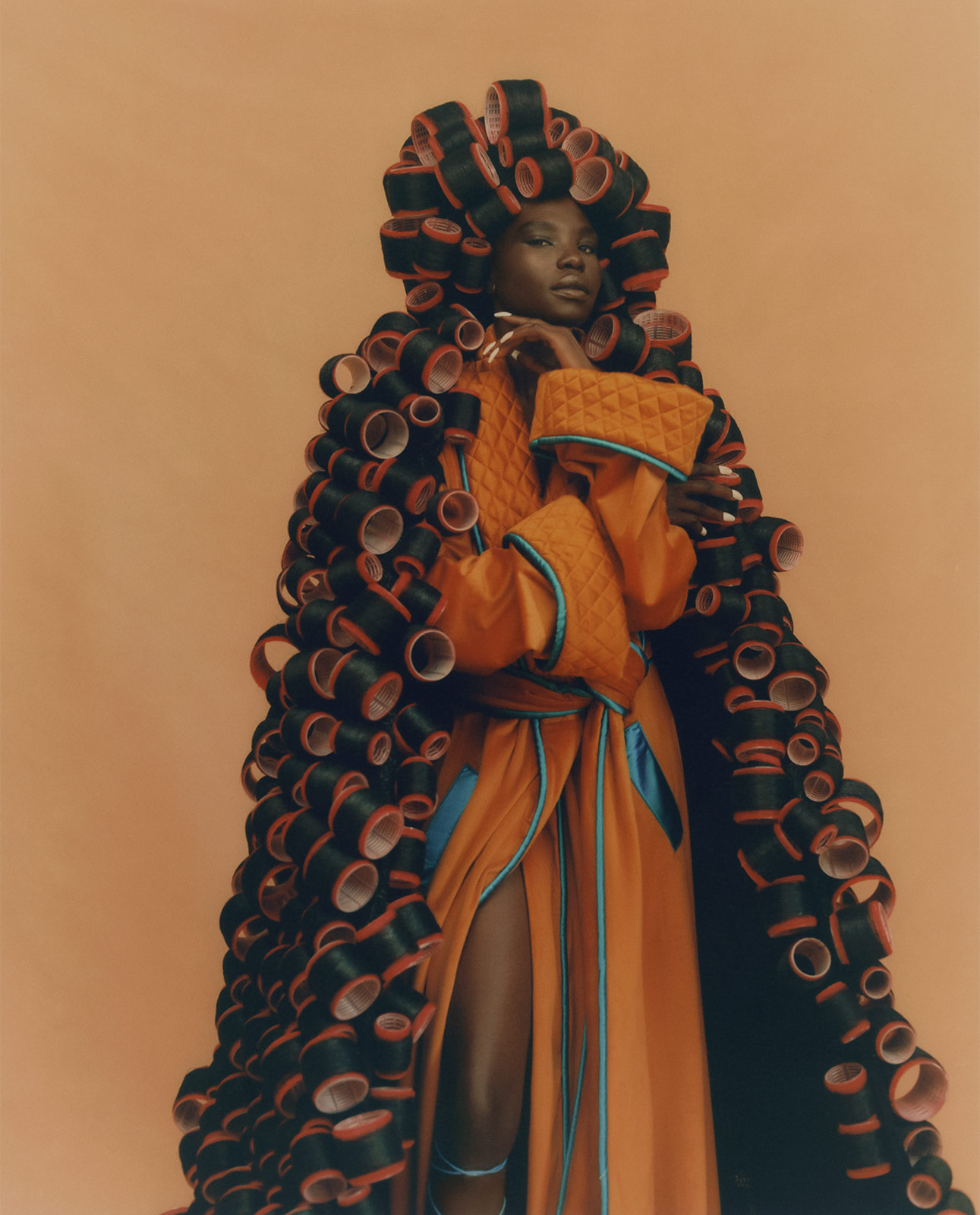 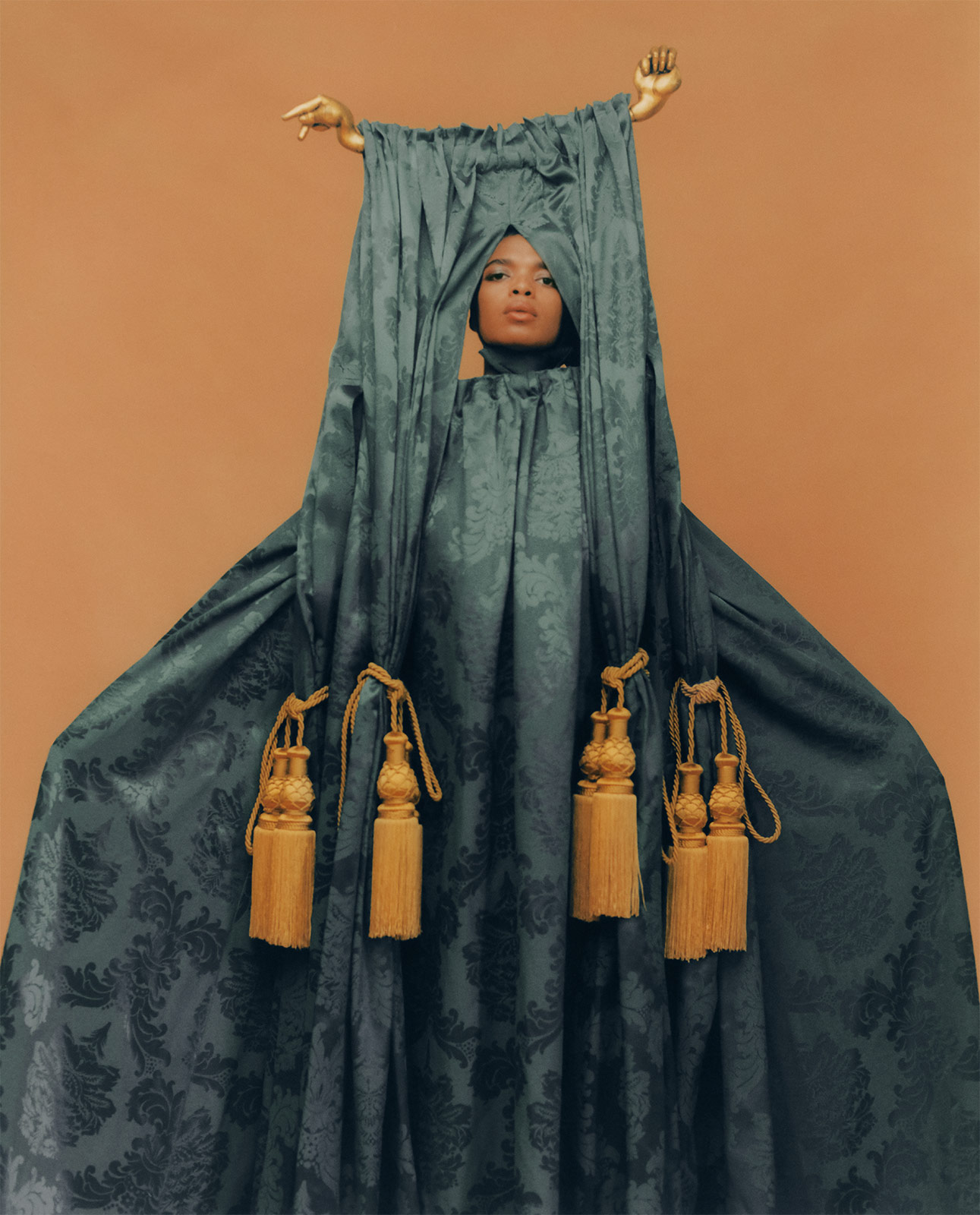 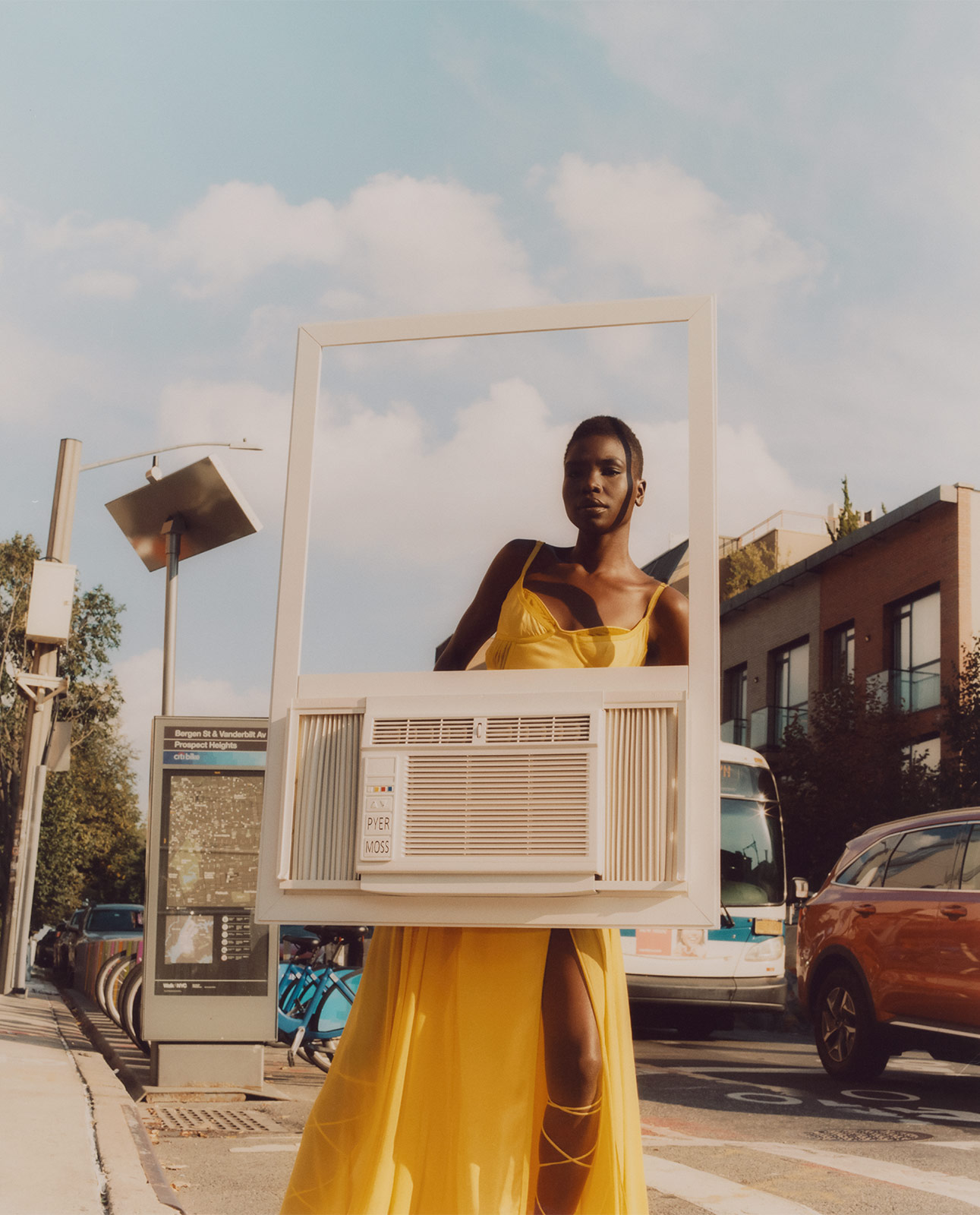 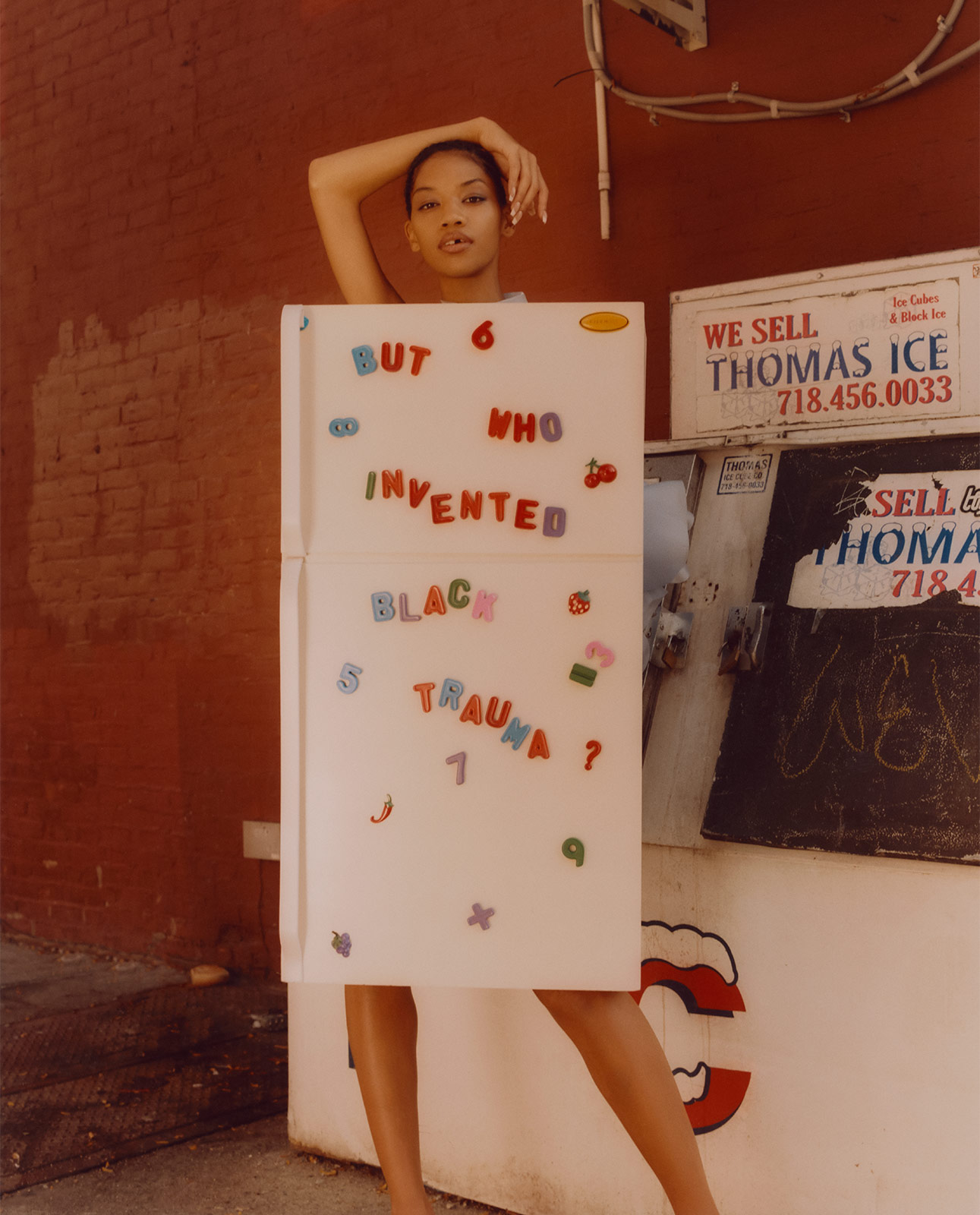