From an opera in the beach to insipid giant sculptures 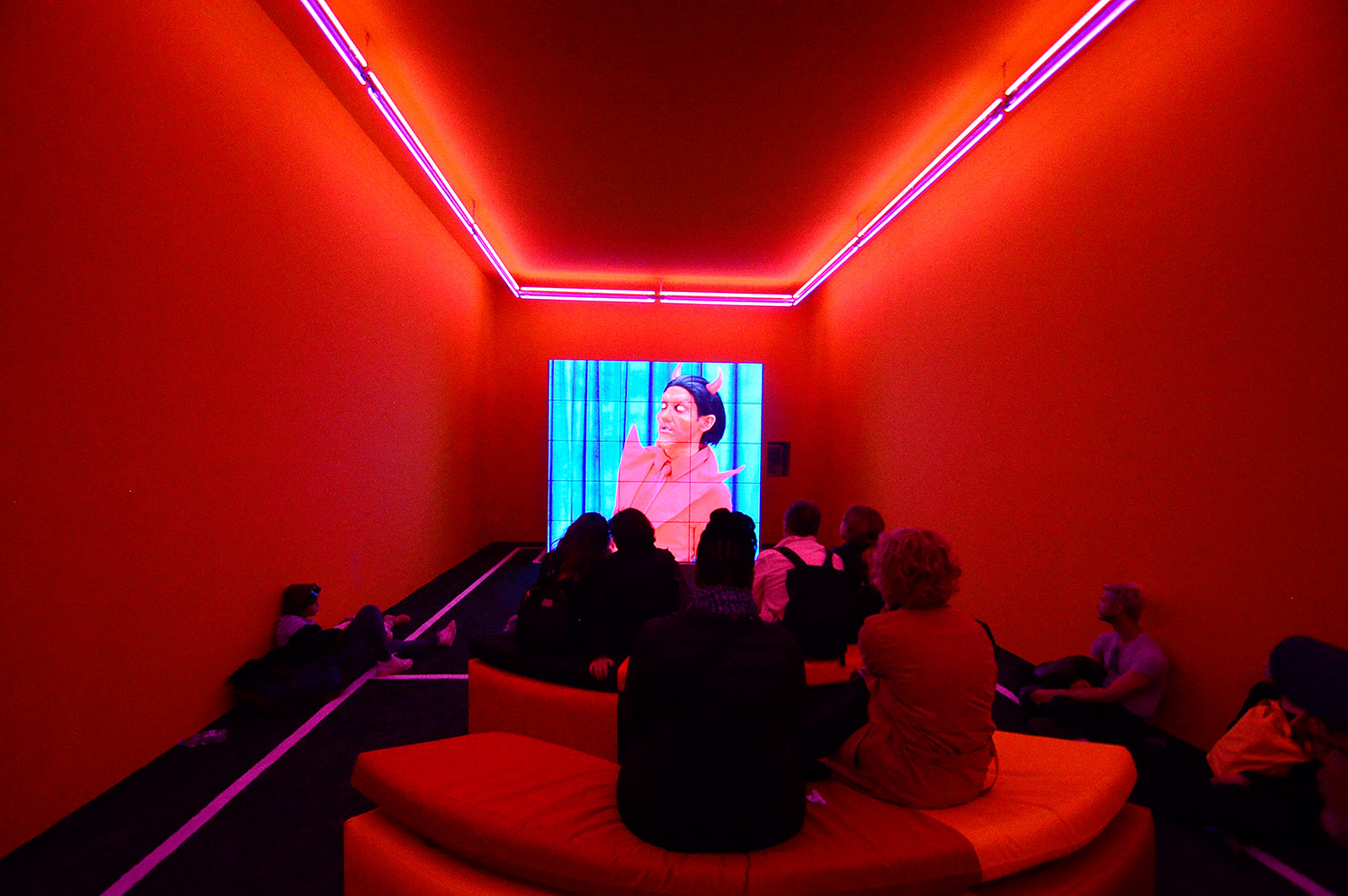 Every two springs since its first iteration in 1895, the Venice Biennale of Art lands at the Italian city. This year, the 58th edition of the most famous biennale runs until November 24 with uncountable shows, talks, performances, and more.
Ninety nations will stage their own curated exhibitions at the permanent national pavilions in Giardini and Arsenale, which host a total of sixty-two countries. The remaining twenty-eight are located across the city, from San Marco to Giudecca. This year, several countries participate for the first time, like Ghana, Madagascar, Malaysia and Pakistan, something new and exciting. In addition to the national pavilions and this year’s central exhibition, titled May You Live In Interesting Times, numerous museum shows, off-site projects and collateral events also open their doors during the Biennale.
National Pavilions
The international jury announced the winners of this year’s edition on Saturday. The first prize to the Best Pavilion has been awarded to Lithuania, which presents the artwork Sun & Sea (Marina) by artists Lina Lapelyte, Vaiva Grainyte and Rugile Barzdziukaite. The immersive installation consists of an artificial beach in a naval warehouse. Visitors enter the space on an upper balcony from which they can observe the holiday-makers below, kids building sand castles, or tourists soaking up the sun laying down on towels. The work is a performance about climate change and, at the same time, it’s also an opera about a day at the beach beautifully sung by the tourists. A lament to the eclipse of the world.
Belgium’s Mondo Cane has been awarded a special mention as National Participation. Jos de Gruyter & Harald Thys’ pavilion is filled with animatronic figures and other folk figures. Some are locked behind bars as if the country itself was a 19th-century asylum. Despite the childlike exterior of these automatons, underpinning them are the existential crises hitting western Europe today. On another hand, the French pavilion’s Deep See Blue Surrounding You by Laure Prouvost makes us enter through the ground and exit through a haze of vapour, all the while swimming through a film of epic proportions in between. Laure Prouvost’s original homage to the sea, featuring glass oceans, operatic songs and live performers, is one of the most visited pavilions.

Ghana’s first pavilion is extremely strong: it features paintings by Lynette Yiadom-Boakye, films by John Akomfrah, shimmering bottle-top hangings and tremendous black-and-white portraits from the 1960s by Felicia Abban, Ghana’s first professional female photographer. Moving on, we see a transgender and non-binary dance class in Brazil through the work by artist duo and life partners Bárbara Wagner and Benjamin de Burca. In the double-screened video installation, dancers are jaunting their lycra-clad curves to intoxicating music in a piece called Swinguerra, about dance subcultures popular in Recife, where gangs get involved in dance battles. Dance is the subject of the Swiss pavilion as well, where another duo, Pauline Boudry and Renate Lorenz, dance on film with a number of regular collaborators.

Once, in a pastiche of male territorial pees, the Bilbao-based artist Itziar Okariz went through New York City lifting her dress and urinating in both public and private spaces: in subway stations, on the Brooklyn Bridge, on cars, and in fountains. With this work, showing patriarchal asymmetries of power, Okariz positioned herself in the art world. This year, Spain’s Pavilion pairs Okariz’s work with Sergio Prego’s. The pair approach bio-political concerns, drawing attention to gender expectations with regard to media in contemporary art through Okariz’s video works and performances surrounded by Prego’s sculptures, which also are located in the back garden.

This year’s central exhibition is curated by Ralph Rugoff, director of the Hayward Gallery in London. The title, May You Live in Interesting Times, is a reference to a supposed ancient Chinese curse which was popularised by Sir Austen Chamberlain in the late 1930s in reference to the rise of fascism. The show takes place across two sites: the Central Pavilion in the Giardini, and the Corderie in the Arsenale. Coming from thirty-eight countries, the curator has reduced the number of exhibited artists to almost a half: seventy-nine artists, all of them alive, and fifty per cent of which, for the first time, are women.

The show, apart from its confusing title, pretends to point out the crises and difficult times we are living in. Rugoff clarified that the fact that the big present issues – climate change, nationalism, racism, liquid gender, disparity of wealth, violence, and the global impact of social media – dominate the work of many of the artists in the show, “art is more than a document of its times” and, therefore, “there is no thematic umbrella.” The exhibition is divided into Proposition A in the Arsenale, and Proposition B, in the Central Pavilion. Another important novelty is that, for the first time, the seventy-nine artists are featured on both sides, and each venue highlights different aspects of an artist’s practice.

The Golden Lion for the Best Participant in the International Exhibition was muchly deserved given to Arthur Jafa (1960, USA). Jafa’s film The White Album focuses on white supremacy and features, among others, footage of a young, racist YouTuber, the anti-racist speech of a former white nationalist, or CCTV footage of the white supremacist and murderer Dylann Roof. Music is a huge factor in the film, which includes Iggy Pop, for example. The piece is always engaging, as Jafa implicates us in every clip and every word.

The Silver Lion for a Promising Young Participant went to Haris Epaminonda (1980, Cyprus). Two special mentions went to Otobong Nkanga (1974, Nigeria) and Teresa Margolles (1963, Mexico), who shows two found-object sculptural installations conveying the horror of violence in her native Mexico. Jimmie Durham (1940, USA) is the recipient of the Golden Lion for Lifetime Achievement.

Clouds of whitish mist involve the Central Pavilion entrance, an intervention by Italian artist Lara Favaretto, where the central exhibition is located. A transcendent virtual reality world of wonder, computer game violence, multiple screens with bright colours, or slowly morphing futuristic plant forms are emblematic of the best of the show. The curator’s main theme ahead of the Biennale: the culture of fake news and alternative facts, the culture of fictions as public narratives are mostly developed in video and digital art.

Hito Steyerl’s installation at the Giardini, consisting of four curved screens that enclose the viewers, shows them the study of Leonardo da Vinci’s designs for a submarine for Venice linked to the weapons manufacturing company of the same name (Leonardo). Contemporary corruptions and inequalities always go hand in hand with the absurd and the ironical, with playful storytelling and re-envisioned histories.

The next room features an enigmatic sculptural assemblage by Nairy Baghramian, with the expressive figurations of George Condo and Henry Taylor and the calligraphic abstractions of Julie Mehretu. Elsewhere, Njideka Akunyili Crosby’s dense paintings of figures in interiors are put together with Carol Bove’s steel sculptures, paintings by Avery Singer, and the photographs of Anthony Hernandez. Visual cacophonies and collisions between works hugely distinct in form and content from one another; is this a sort of planned chaos? Then follows a work by French artist Cyprien Gaillard, who projects a flailing, dancing monstrous figure on to a whirring fan. Move to the side and it disappears. Gaillard’s apparition glows in an otherwise semi-darkened room filled with threat and menace.

The Arsenale, aided by the elegant use of plywood partitions to break up the monotony of the columned 300 metres-long Corderie, surrenders to massive video art installations. At the entrance, Christian Marclay presents a collage of 48 War Movies, his latest screen montage, in which each spooling film blocks out part of the one beneath it in an infinite regression of violence.

For me, one of the best pieces is Kahlil Joseph’s filmic collage using found and original footage. BLKNWS is a two-screen news channel of American black life, from archive footage of Malcolm X and Miles Davis to leading African-American thinkers at public events, accompanied by different soundtracks. On another hand, Jon Rafman has been creating video-game-style films for some time now. In Venice, he presents a film which is a stream of dream-like absurdities, with a figure consisting of a child’s head on legs as its protagonist. In Giardini, groups of faceless figures are repeatedly and brutally destroyed and abused.

Ed Atkins shows a vast installation titled Old Food, which involves multiple video screens showing CGI tearful children in motion and some other digital figures historically dressed like coming from a Medieval video game. They are all, inexplicably, weeping. Whilst in the Giardini, Atkins’ self-portrait drawings as a tarantula – scuttling across hands and feet – enigmatically punctuate the space appearing in several different places.

There are a lot of photographic portraits in the show. The curator’s choice to use this media is strong, just like Mari Katayama’s unflinching self-portraits exploring her disabilities or Zanele Muholi’s self-portraits in which she explores her identity. She has a towering presence in the Arsenale, where her gaze repeatedly confronts one in vast wallpapered images.

Soham Gupta’s studies of the dispossessed people of Kolkata, with whom he collaborates so that they help dictate how they appear to the viewer, are deeply affecting, whether in black and white in the Giardini or in colour at the Arsenale. In words of the curator, he has chosen artworks that reflect upon precarious aspects of existence today, including different threats to key traditions, institutions, and relationships of the ‘post-war order’.
The 58th edition of the Venice Biennale is on view on several locations across the city until November 24. 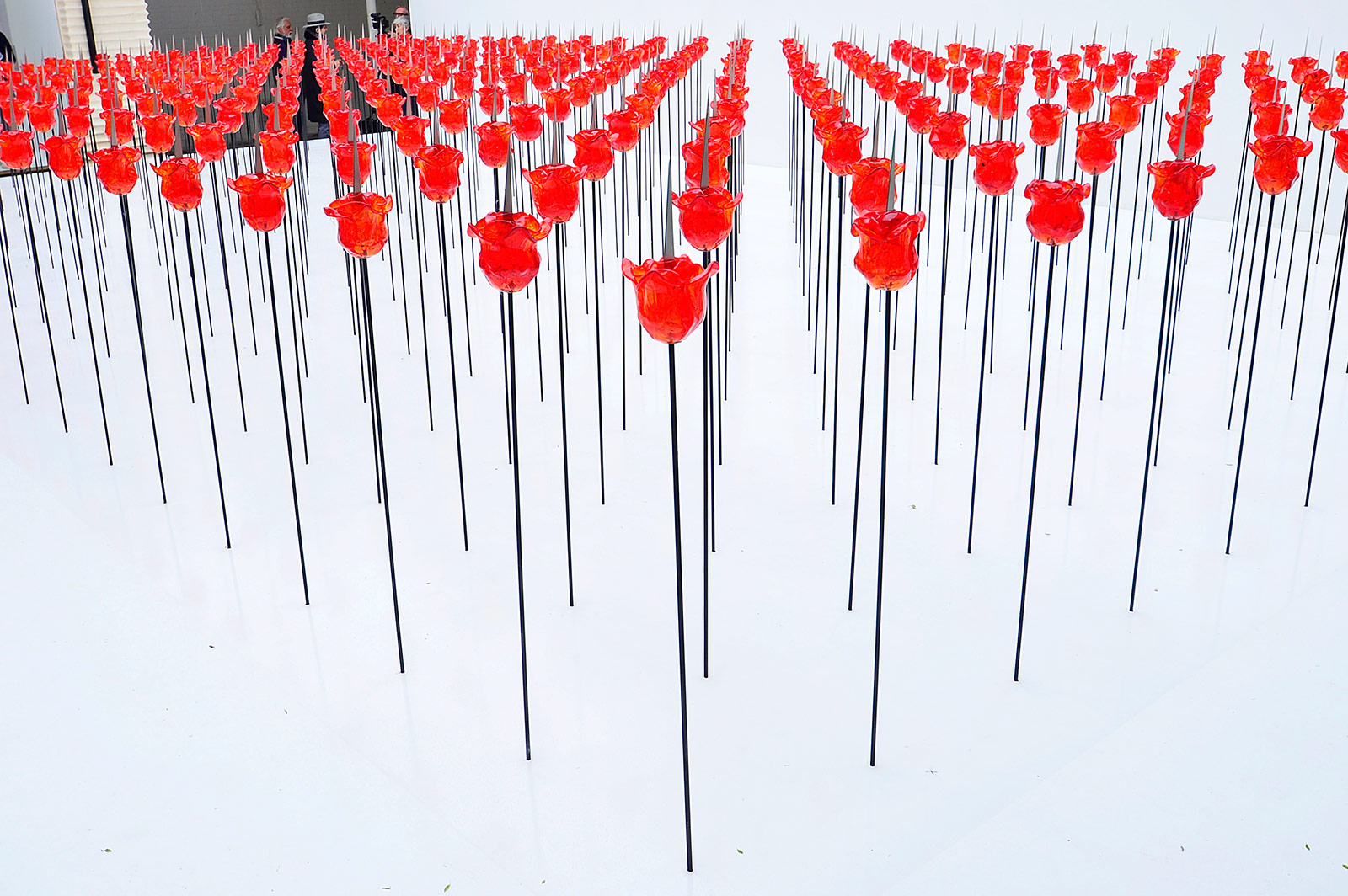 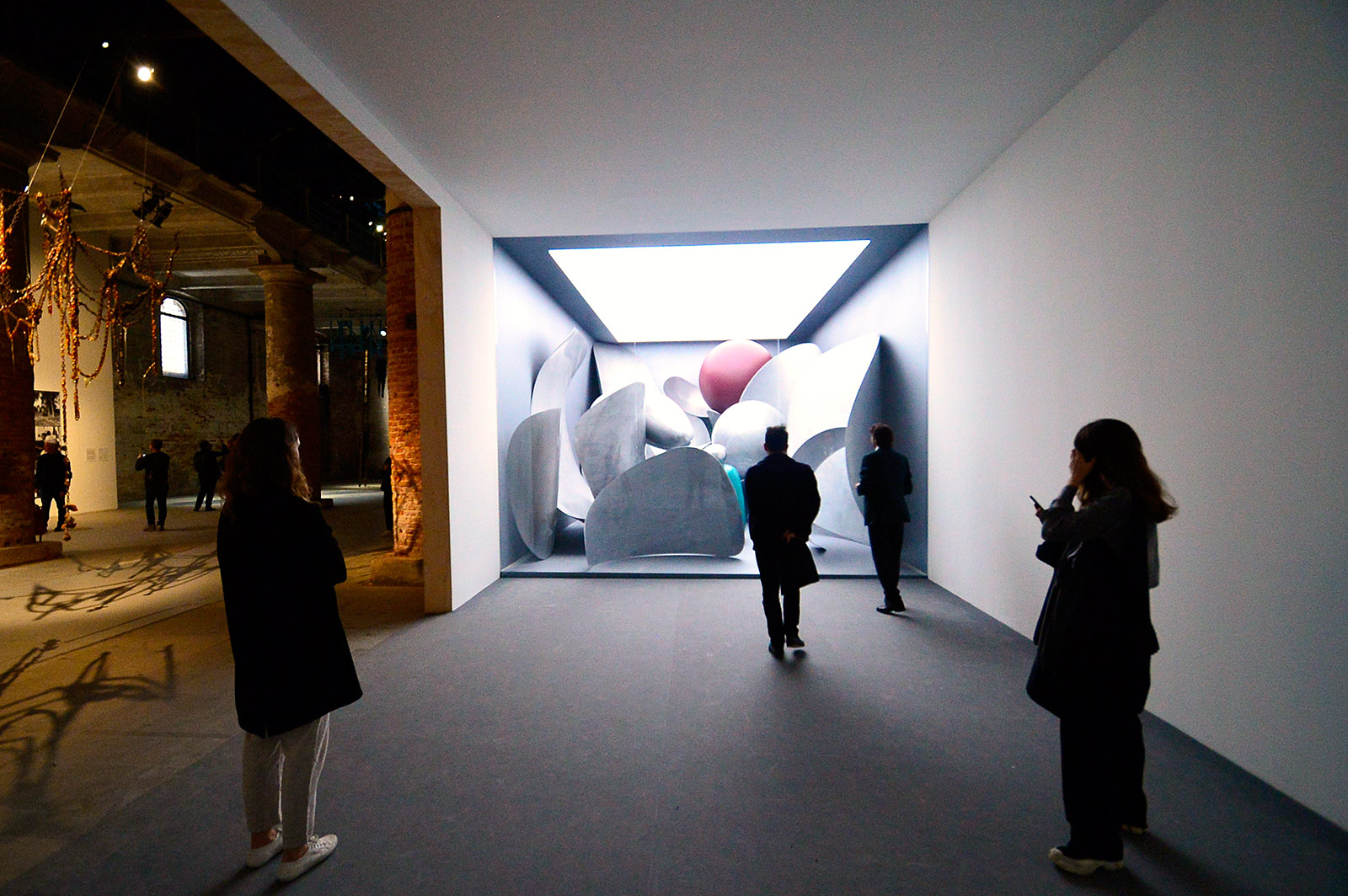 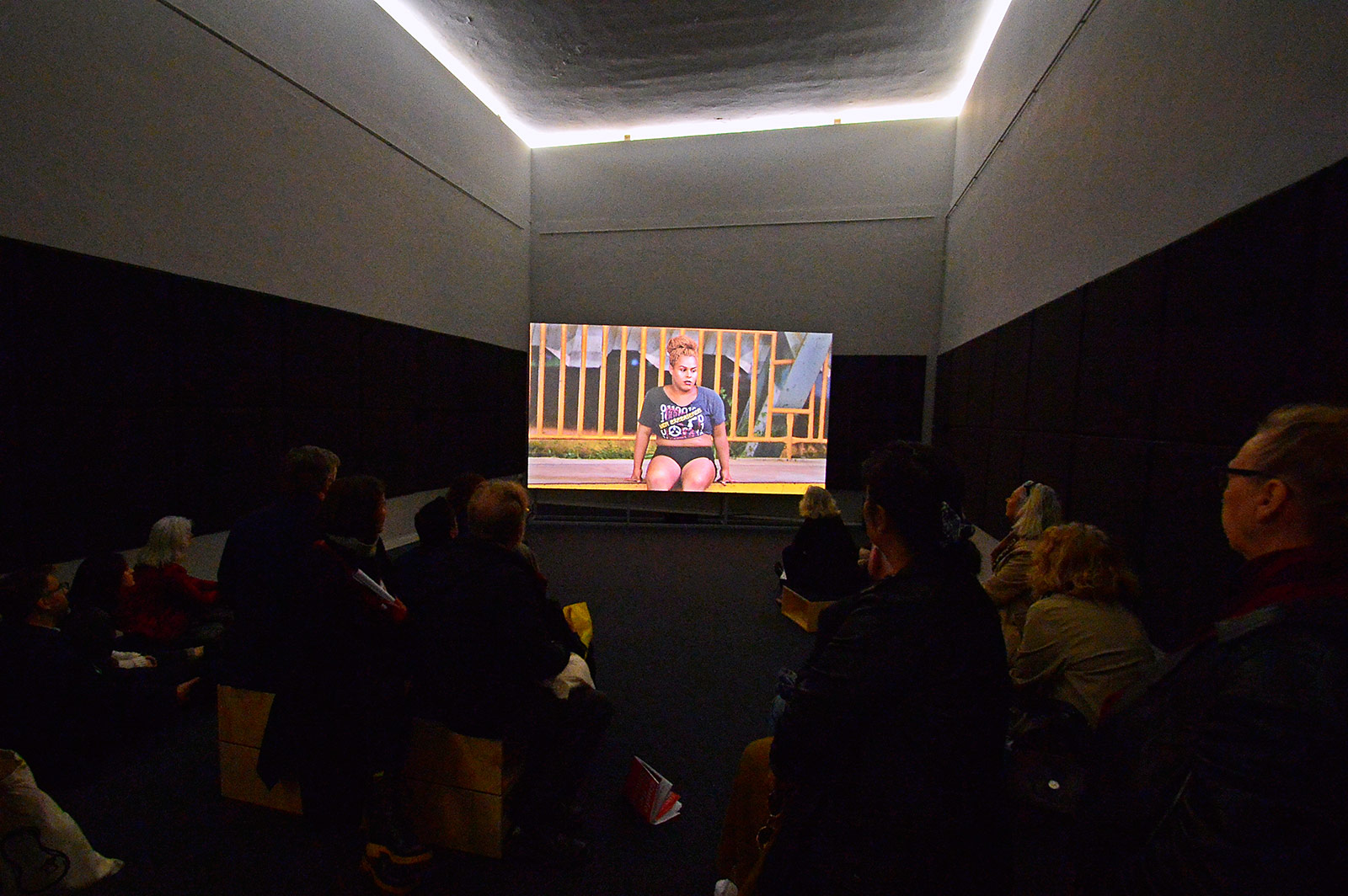 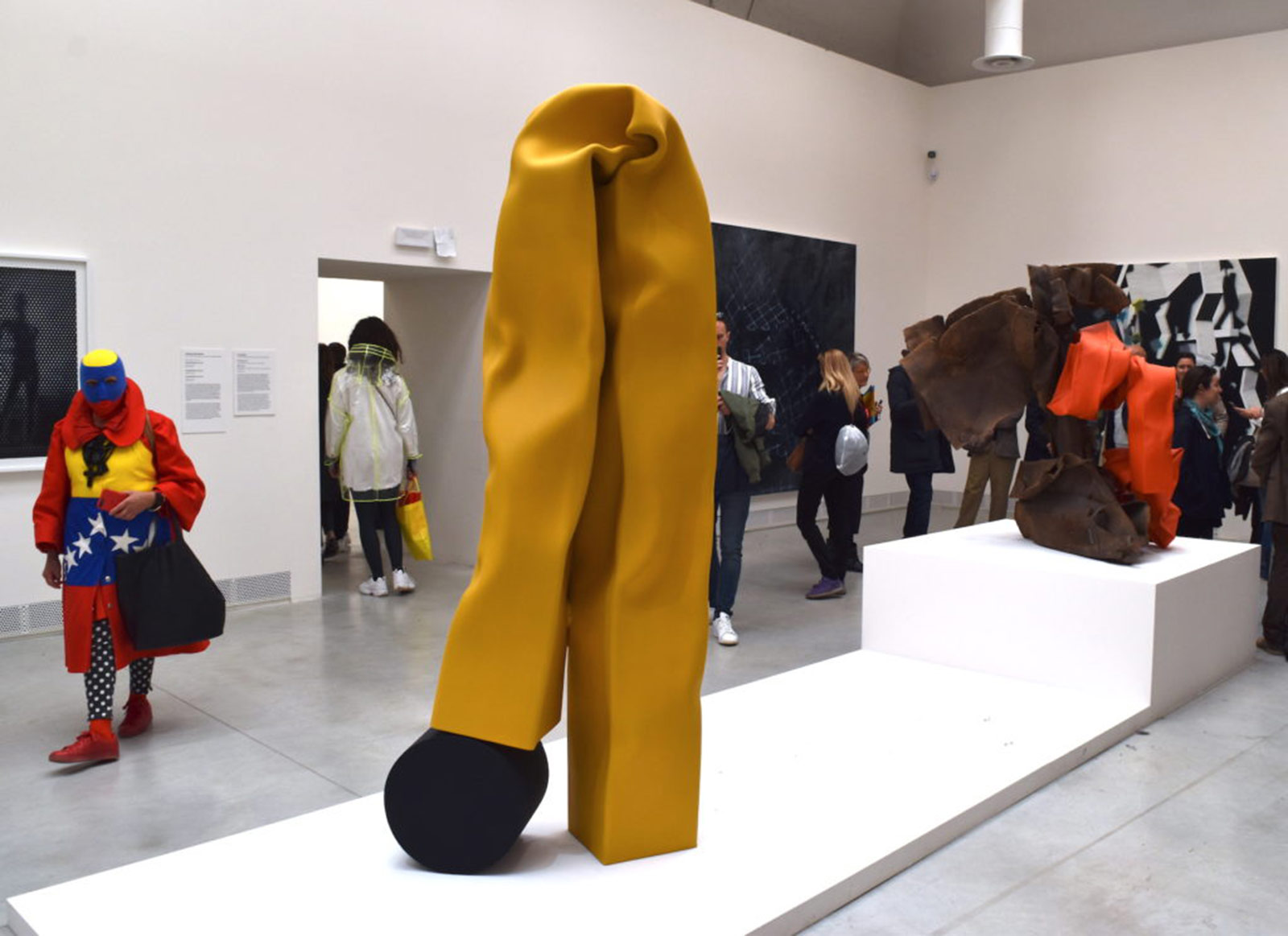 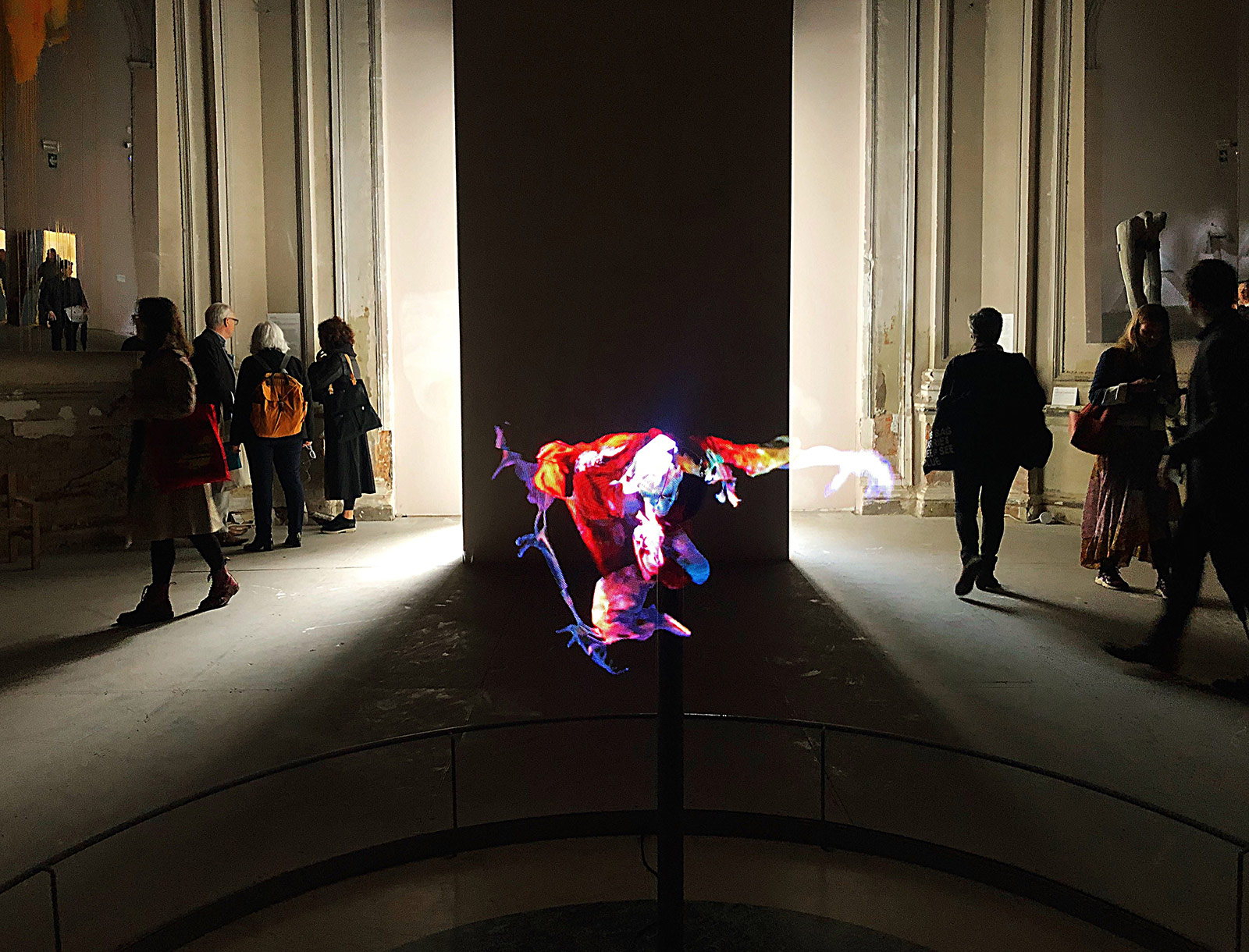 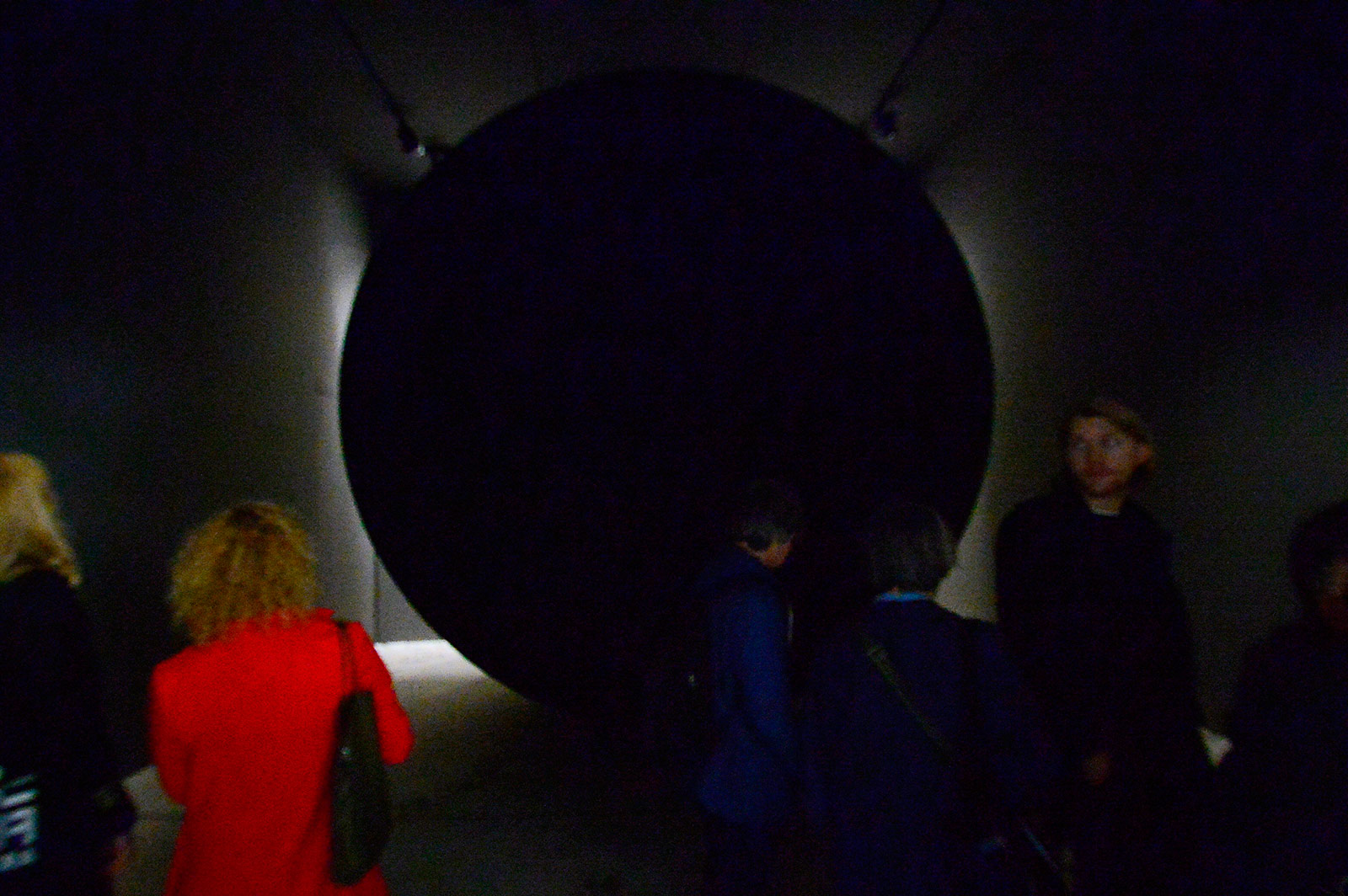 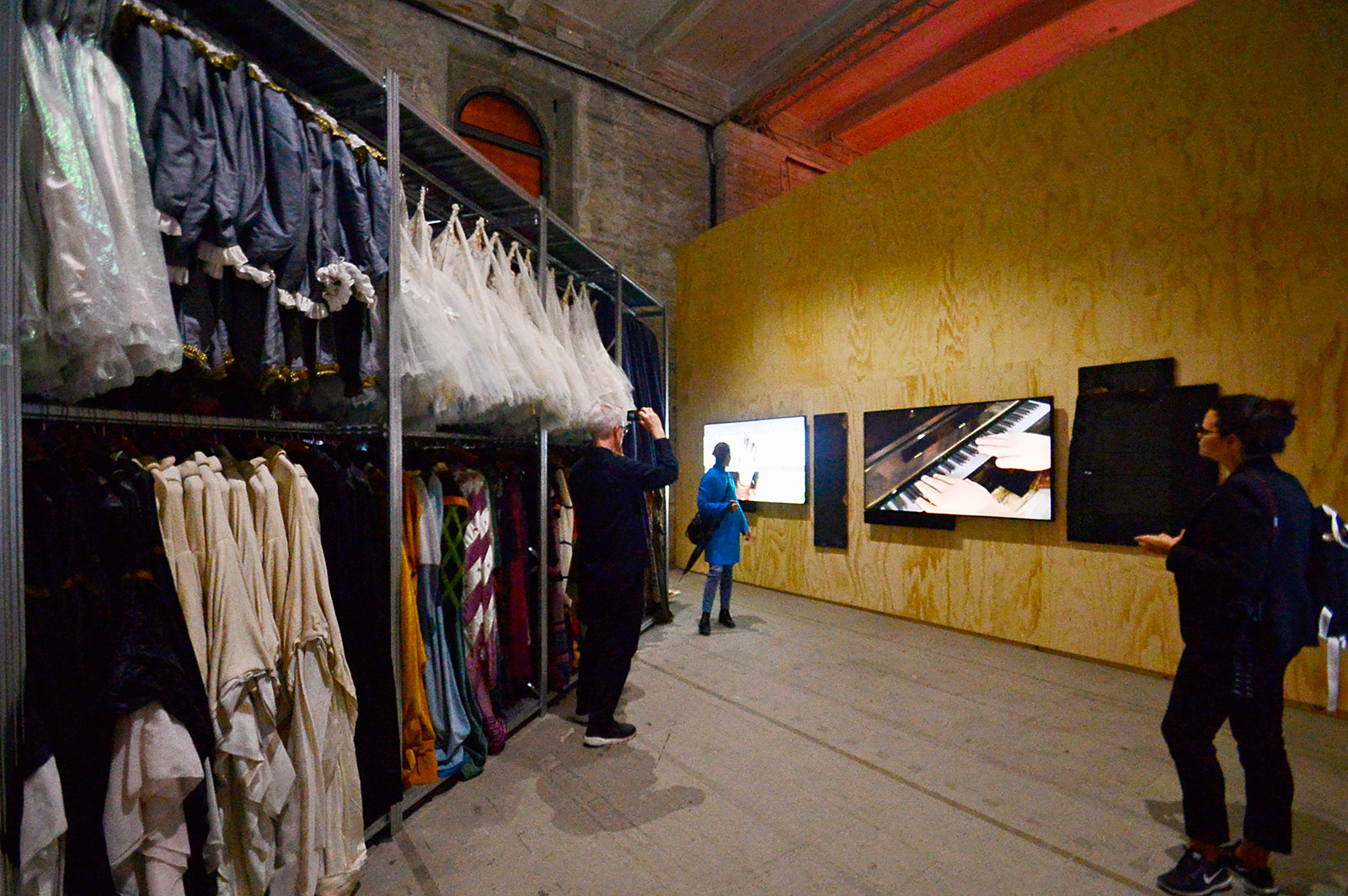 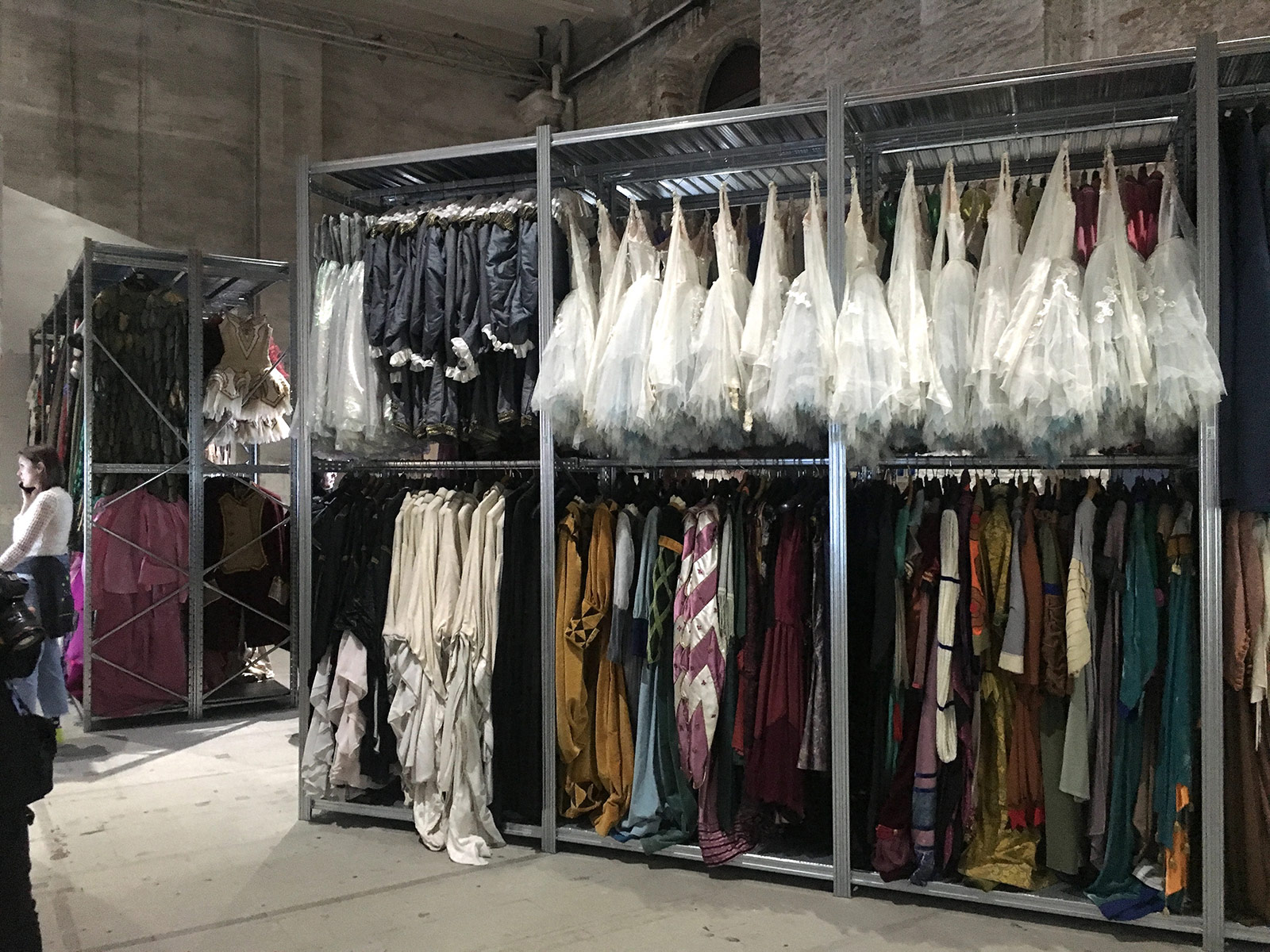 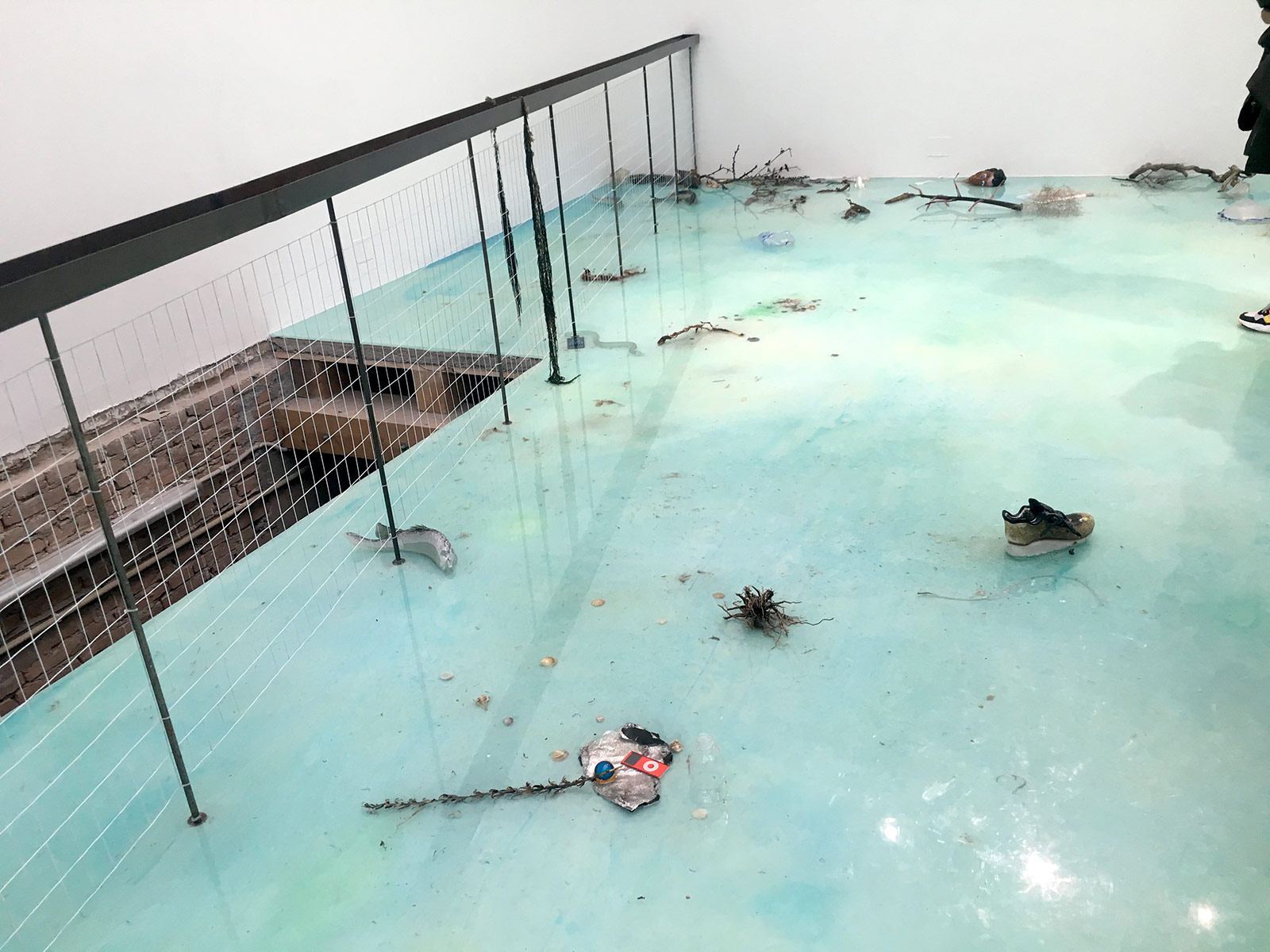 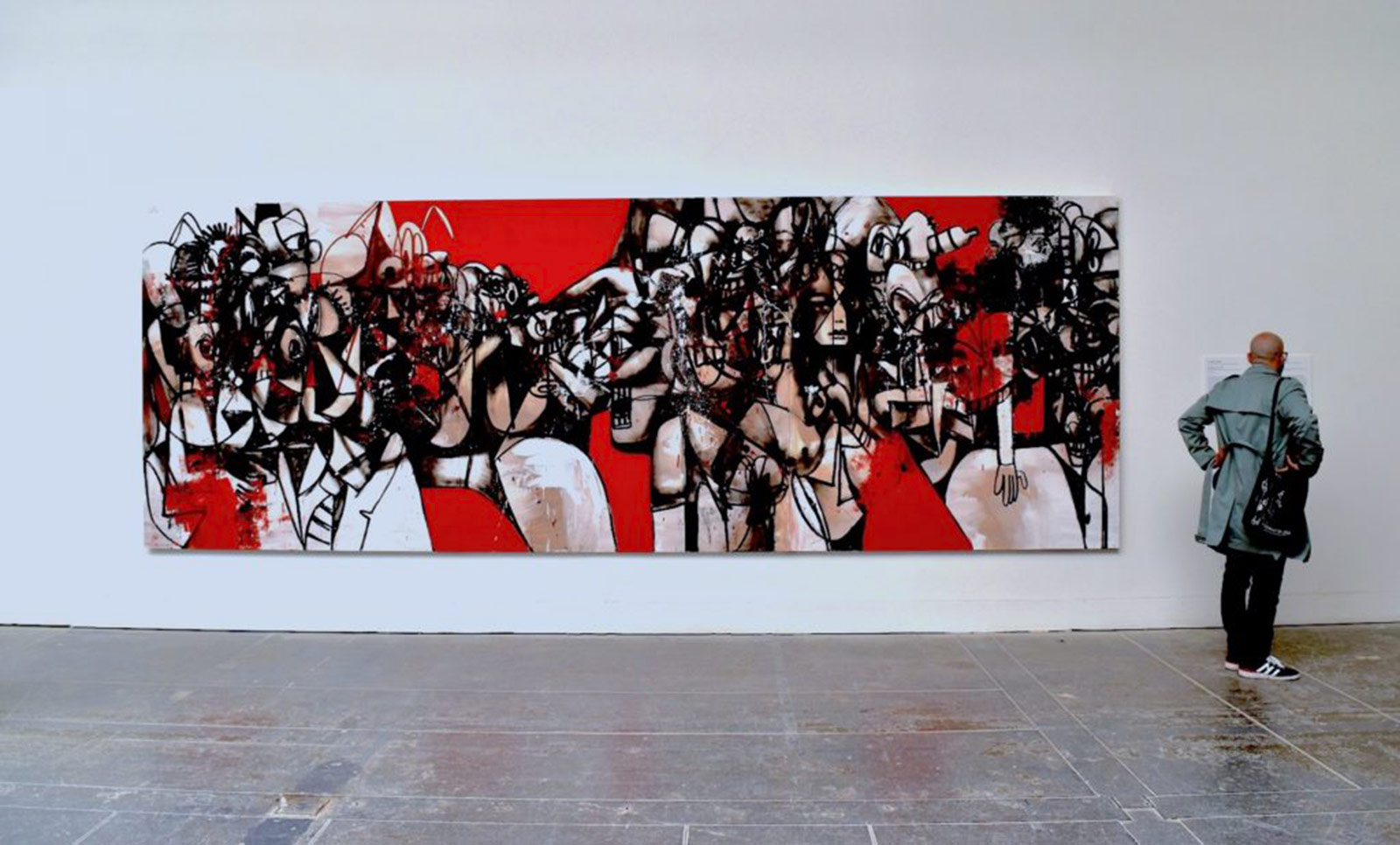 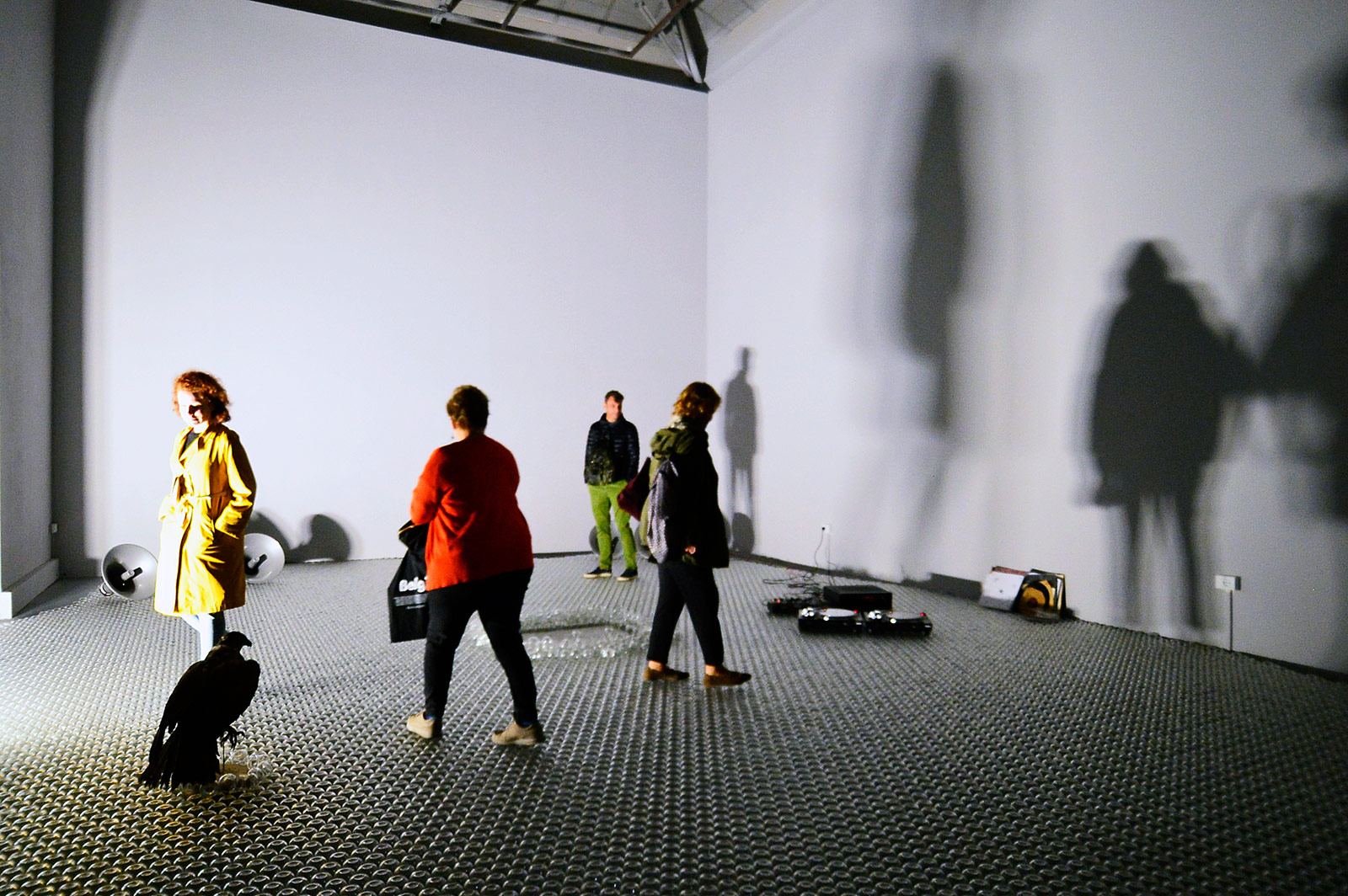 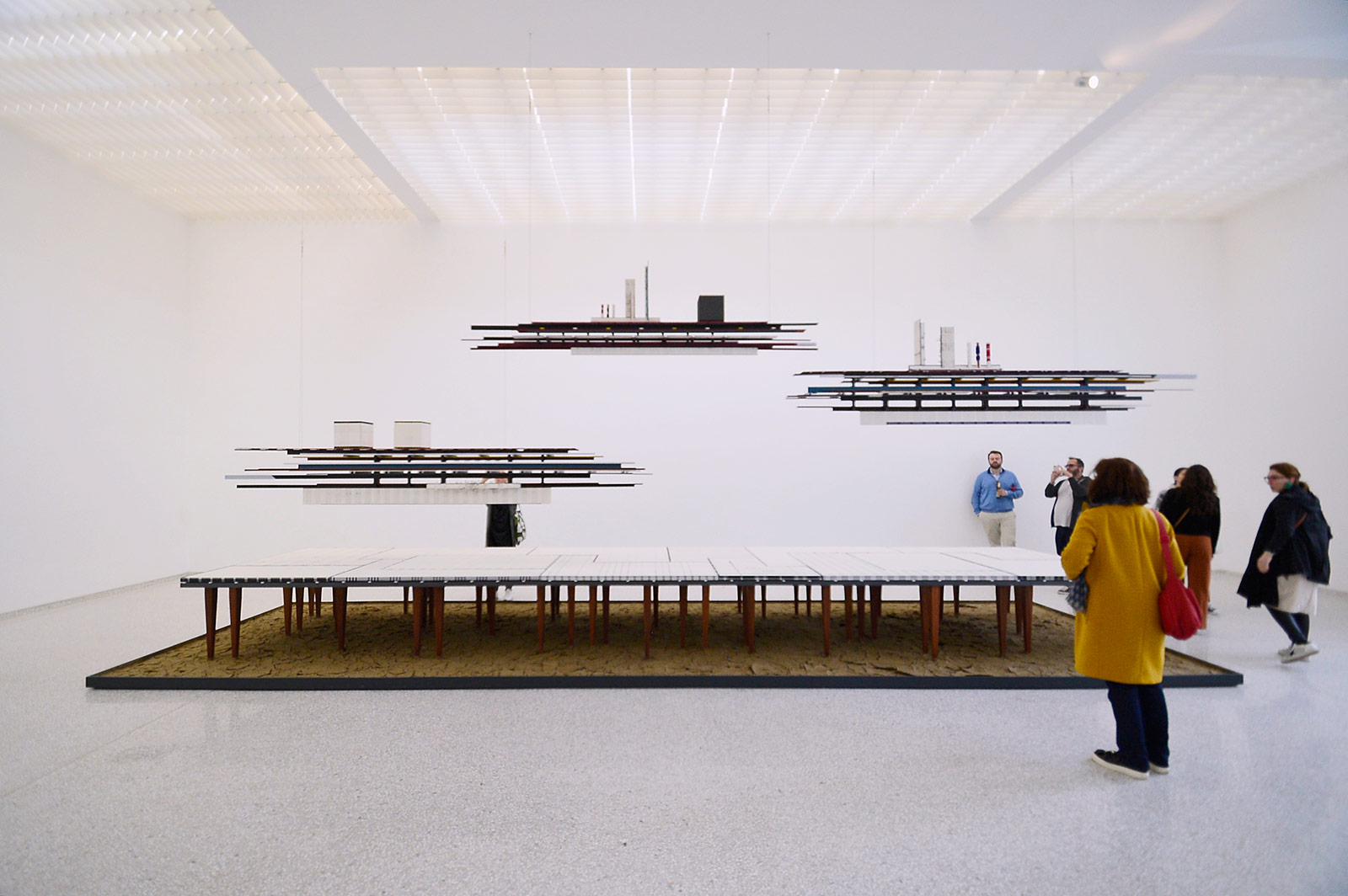 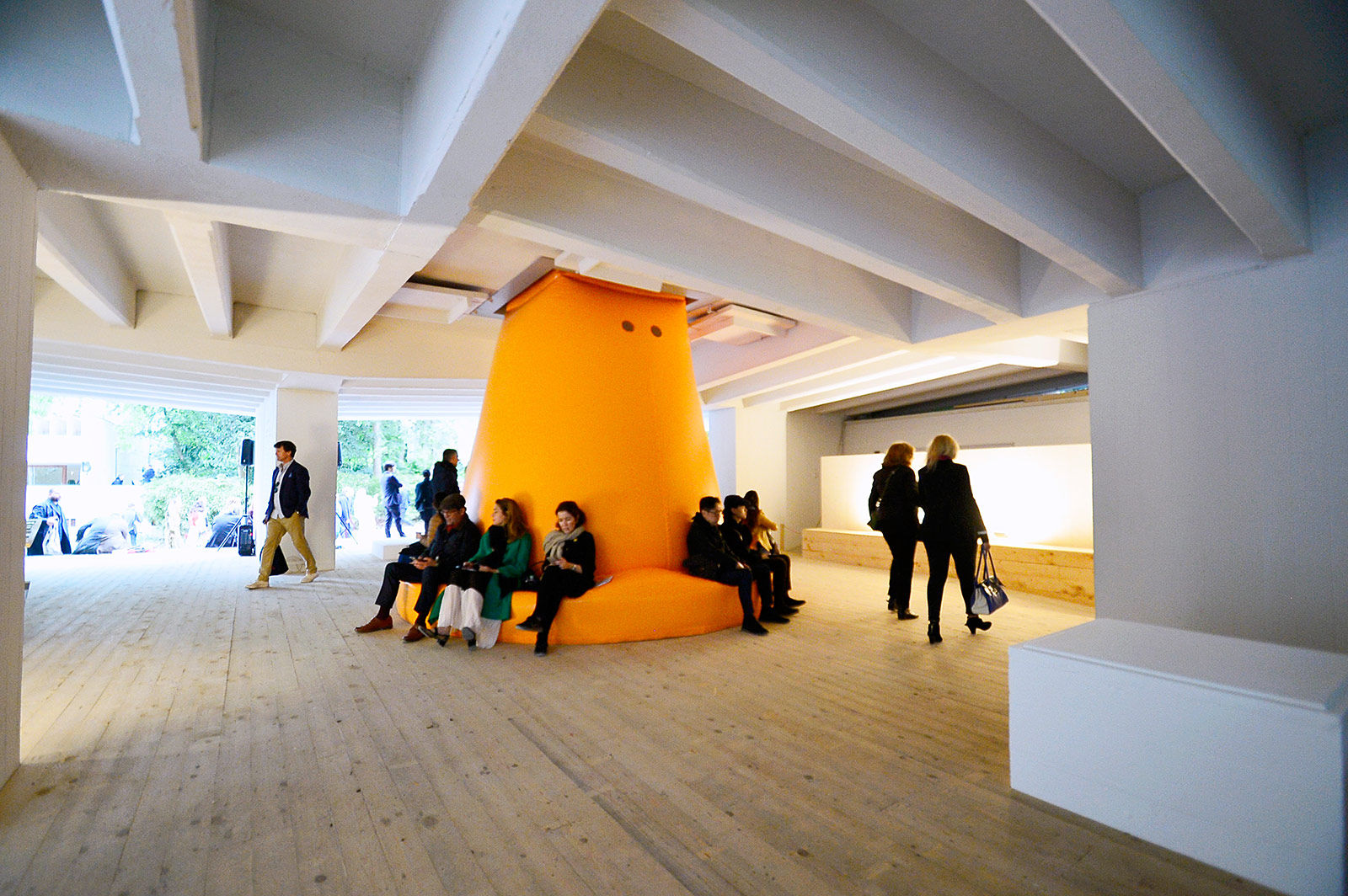 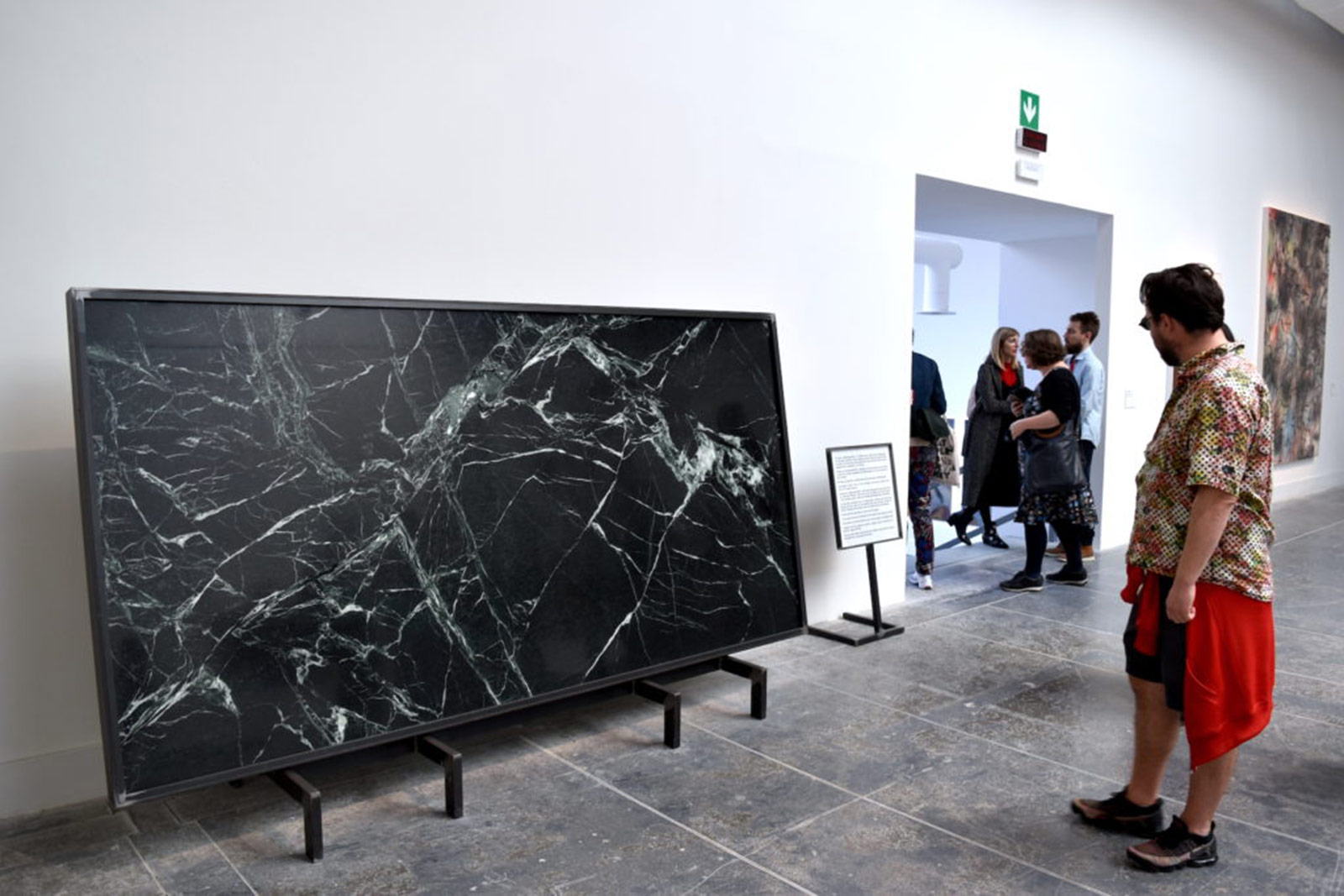 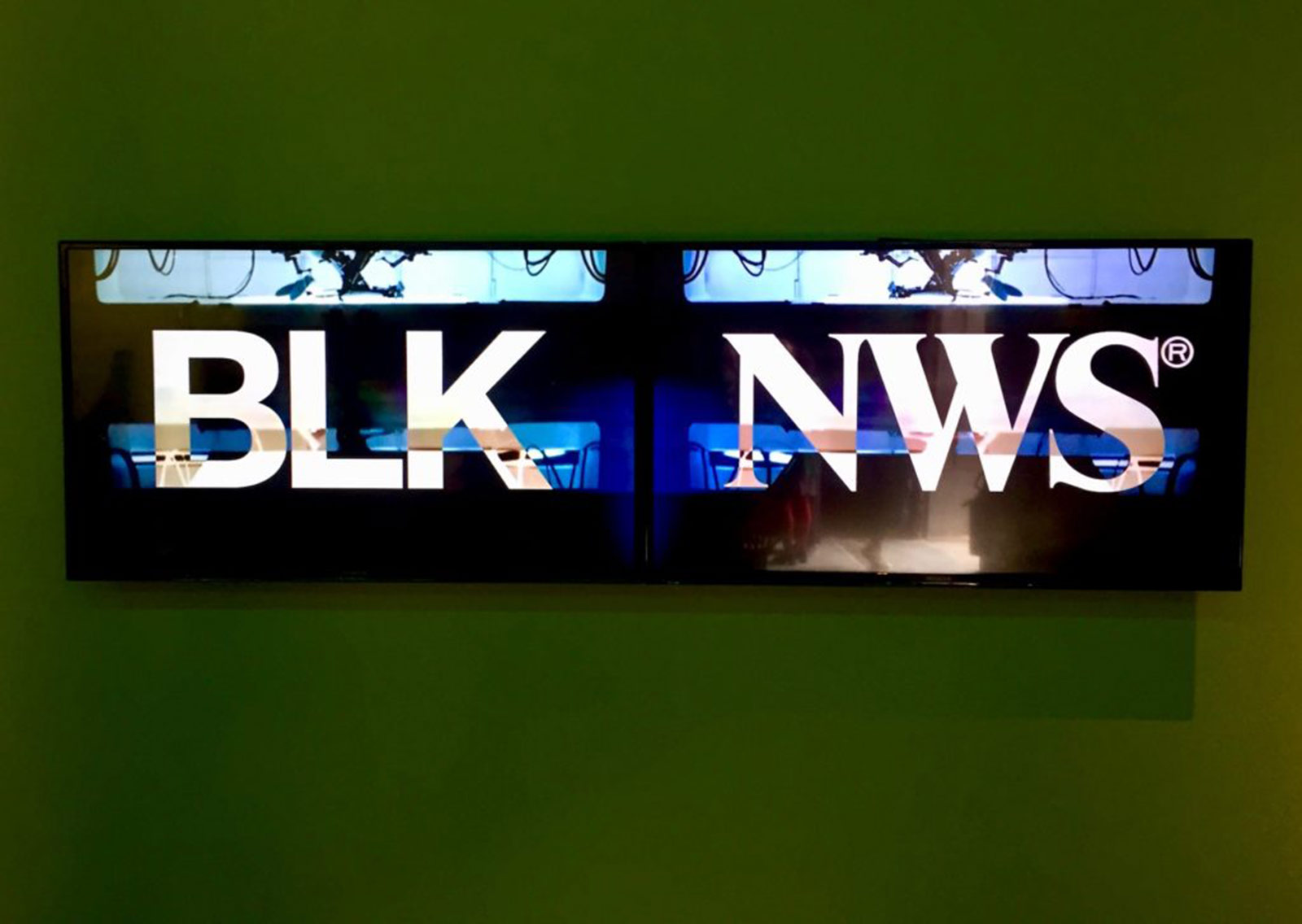 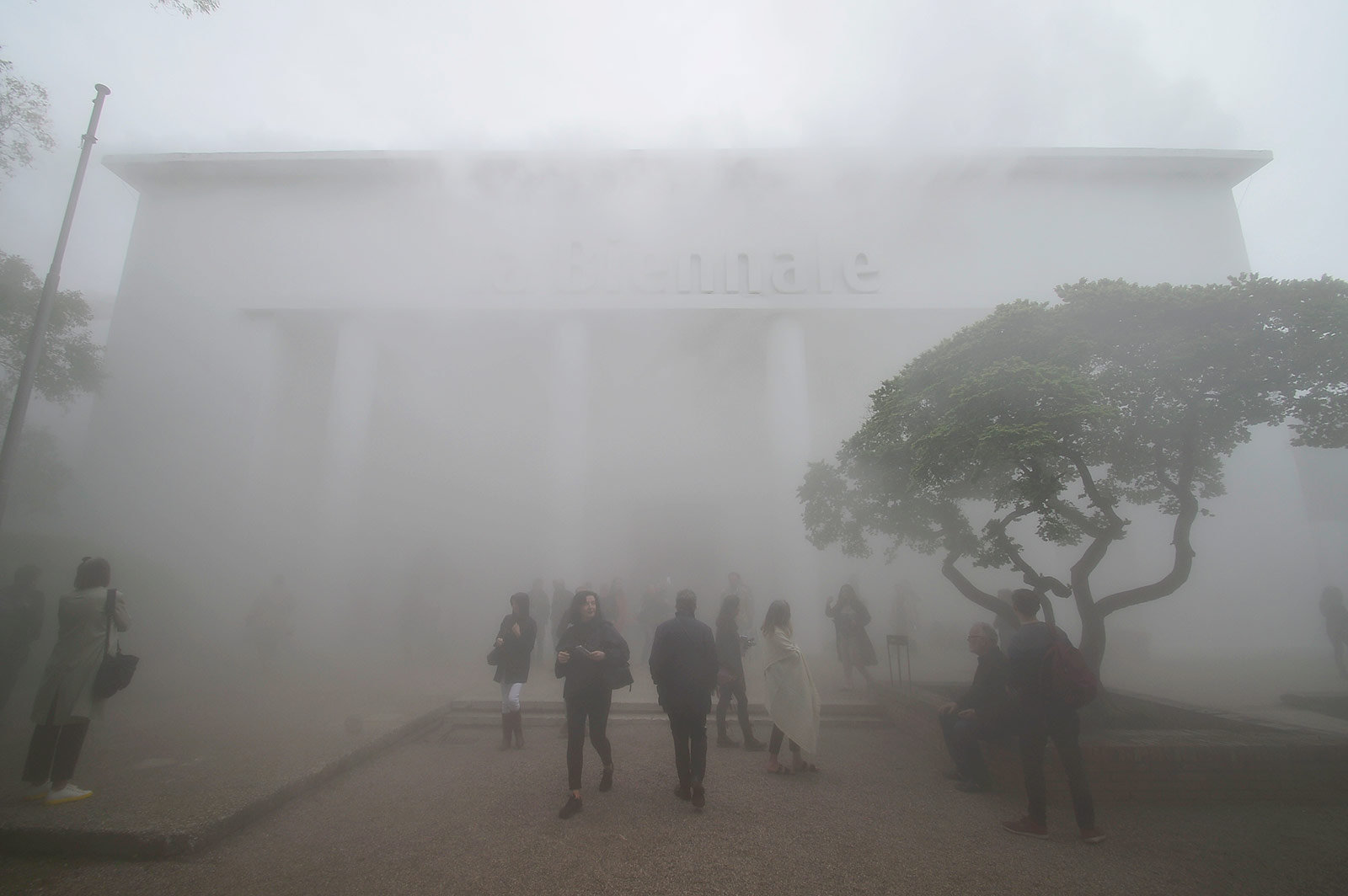 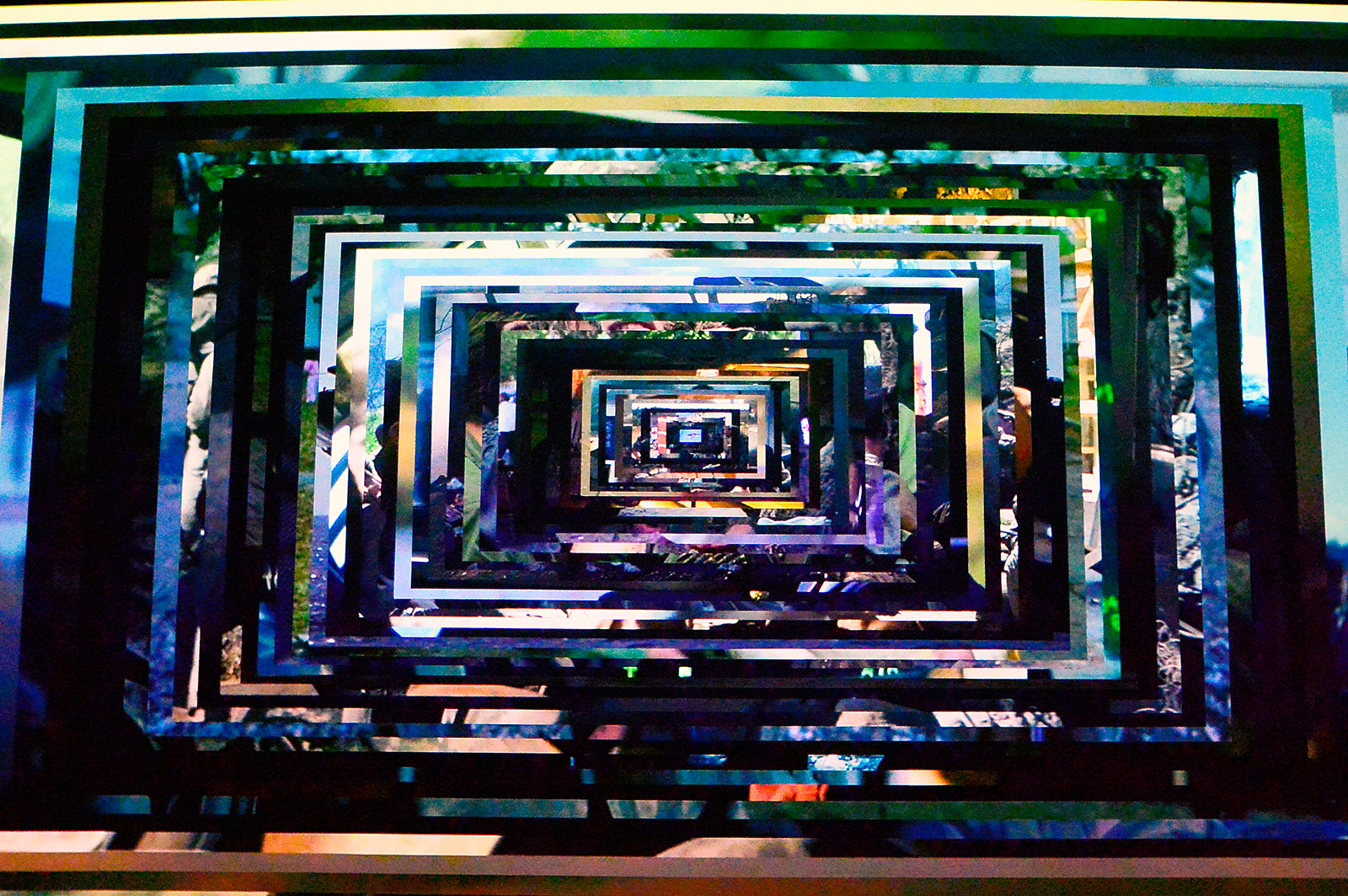 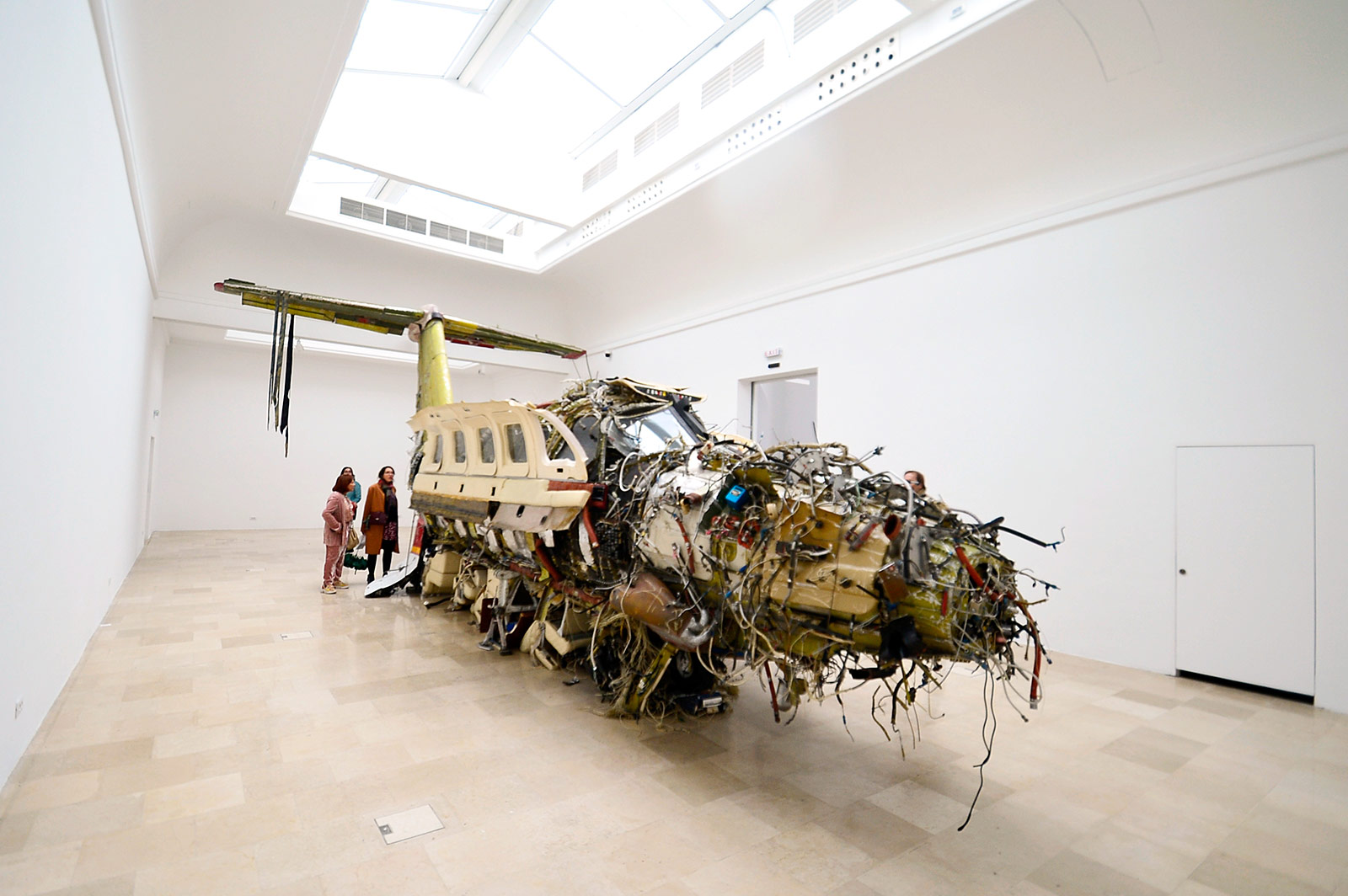 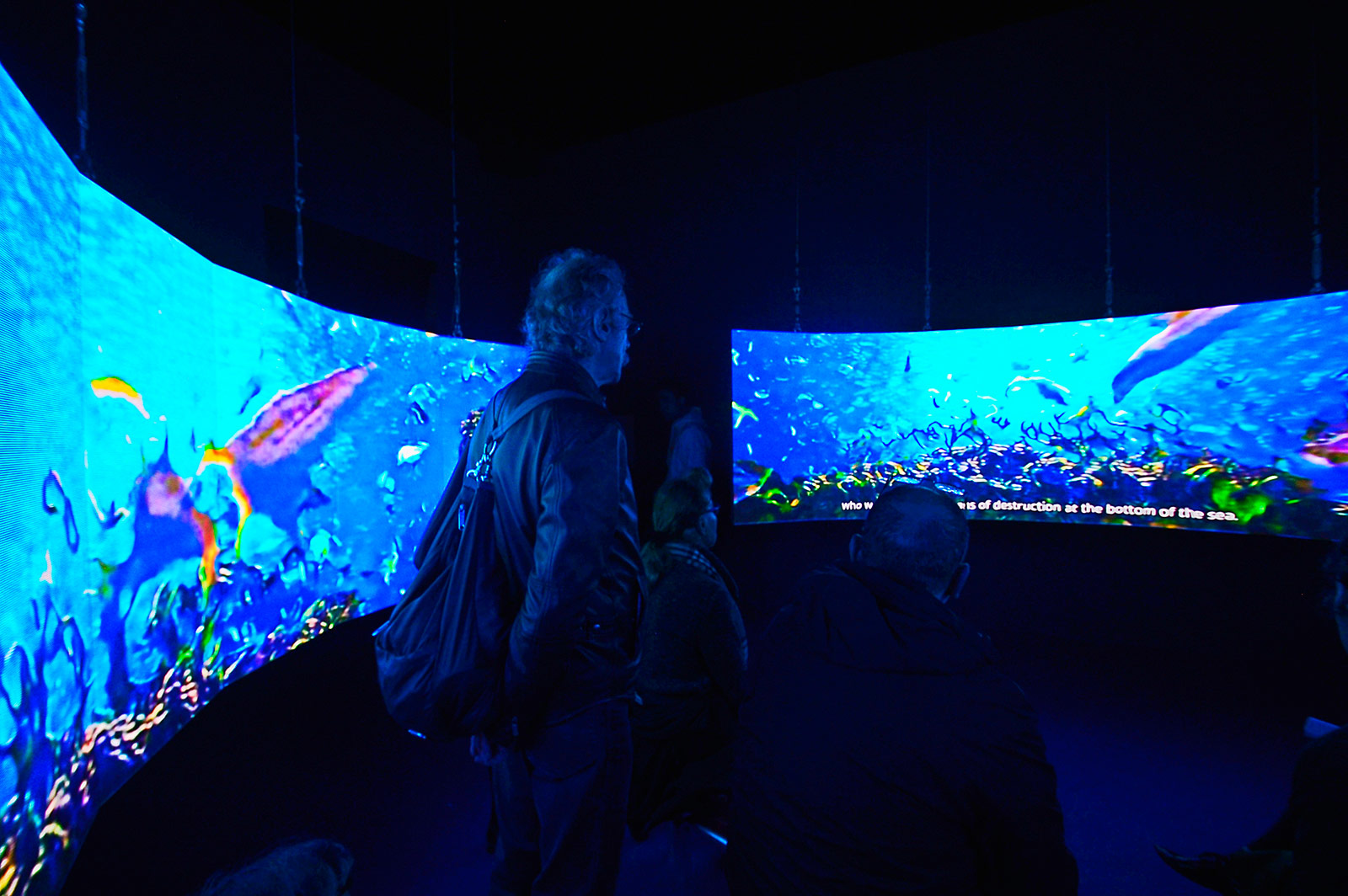 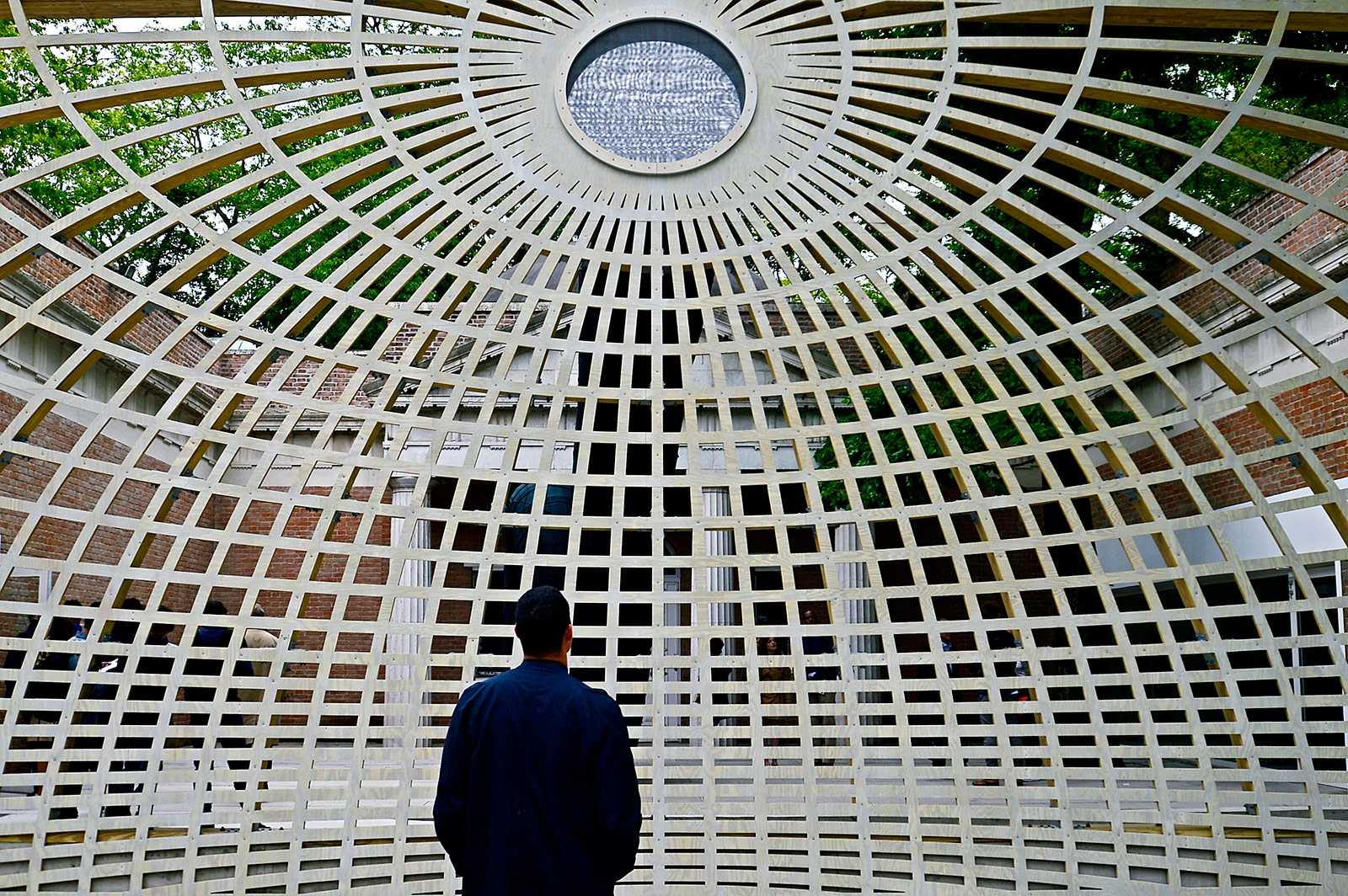