It Is All About Artistry 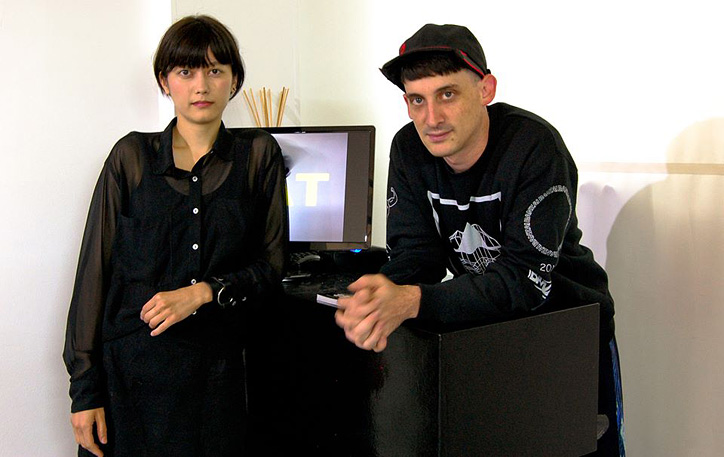 Primitive London is a concept store and label based in East London, created by Lui Nemeth and Andrew Grune. Firstly based under the arches of the Haggerston overground and after the opening of pop up shops around the world, they re-opened last June in Dalston selling pieces from international emerging designers and introducing new artists to the public. METAL gets to meet Andrew Grune and Henry Mackay-Bull, Primitive’s buyer, to talk about Primitive’s aesthetics and aspirations.

Tell us about Primitive London, how did it start?

Andrew Grune: We knew lots of talented designers and artists in Tokyo that we couldn’t see out there. For instance, the designer behind Cassette Playa didn’t have any stockers in London even though being a London based designer. The same goes for Nasir Mazhar, so we stocked them. We wanted to create a space where Tokyo and London designers could show their work. So Lui looked for spaces around London and found the arches in Haggerston under the overground – where was our first shop.

Knowing that Lui is half Japanese, half English and you are Australian. How did you pick London? Why not opening it in Tokyo?

Andrew: I met Lui in Japan on New Year’s Eve. She was in Tokyo visiting family but was studying in London at Central Saint Martins. My visa ran out so I just decided to follow her and move to London.

Primitive London is more than just a label or shop – it is a concept.

Andrew: We like to say we’re a network of underground designers, writers, artists and musicians. So we have a commercial space – the shop, but we’re not really commercial or solely a profit organization. It’s more of an art project.
Henry Mackay-Bull: I guess it runs like a gallery. A gallery represents artists, gives them a space for people to understand their work, we are doing the same but for designers. Some shops are purely commercial driven whereas we’re trying not to see too much difference between an artist making art and a designer making clothes. Primitive is going more by instincts, inspiration and artistic things. If you think about it as art, we’re not putting things too much in a pedestal, having it all at the same level so the art goes aside with the clothing, in a way that it speaks the same language. It is all part of creativity, part of the same thing.
Andrew: The new space is all white, all really simple so people see the clothes as they are. We’re not trying to merchandise it, push people into buying something. It is a very honest place.

Henry: We let it speak for itself. They’re all very strong pieces so they don’t need too much.

How do you pick artists/designers?

Andrew: Like I said when we started, we knew lots of people from Tokyo personally. We have a personal connection with them but then as I moved to London, I met new people. Anna from AVA Catherside introduced us to Nadir Tejani who introduced us to Cottweiler… it’s like a whole follow-through.

Andrew: Yes, that’s why we like to say we’re a network that kind of spreads. And that’s why we also like to do pop-up shops, because we like to meet new people in other cities with whom we could collaborate with.

Talking about pop-ups, you had a few – Berlin, Tokyo, Los Angeles and in central London. What feedbacks did you get from the different pop-up shops?

Andrew: The one in Berlin was good because everyone from London came with us. It was like 16 of us making a big installation in the shop and there was a good response. Tokyo is always great because everyone there is fashion mad and they really love London.
Henry: Saint Martin’s Lane was good. That was more kind of a luxe customer atmosphere from what we’re normally aiming for. The way people understood the clothes was different because it was more accessible, we were part of a hotel, which was quite interesting. The amount of people in the London pop-up was ten times more than it is normally because of its location. It was useful. Designers that are quite niche were showed on a wider scale. People understood it when we didn’t expect them to. Designers that would seem quite alien to most people got a good response. People got to relate to it. It wasn’t as elitist as you might think. It is really exciting because those people would have normally never come across this stuff. Because with the actual shop, customers have to find it and by the time they got here, they already know what it is about.

Are you having any other ones?

Andrew: We’re probably having one in Seoul, which we’re very excited about because it is a capital and close to Tokyo. It is an important place for us to visit. And I love to meet new people. Cyprus is on the works too.

Your new shop is also a gallery space with exhibitions and installations going on. How does it work?

Henry: There is a mini exhibition in our changing room. It is a nice little space that gives people quite an intimate experience. They close the curtain and are alone.
Andrew: We’re getting people to curate that space, making installations. There is one there now, they made an installation where they hacked a doorbell. So there is a pattern on the floor and when you stand on it, they used a way to play some sound pieces which kind of tell your fortune with speakers pointing at different directions.

Do you contact the artists, or do they come to you?

Andrew: It’s kind of 50/50. It’s all through the network. We meet people through other people. Some contact us out of the blue, like Henry and now is a major part of Primitive.

How about the designers?

Henry: I try to find those that speak to us. Andrew: Henry’s a talent scout. Henry: There is so much talent out there so little is represented in shops. It is an amazing opportunity to get designers that would be overlooked or misunderstood. A good example is this guy, Liam Hodges, who graduated this year. We went to the RCA shows and watch 35 different graduates’ work and his was by far the best, he really stood out. We met him and his work totally speaks the same language as the shop, in a really exciting way. He’s a real artist making clothes, which is really what it is all about – artists essentially, not just people that do fashion for fashion. It’s people’s collections that are more than just clothes – it is about ideas, experiences. Artistry is basically what we’re looking for.
Andrew: We’re just as interested in the person as on their work. It is not like we have to be friends but it is about the person. People are making products to sell it and even though we’re selling it, we are interested in people that are not just making it. There is an art project behind it as well.  Henry: When we ask them to do an installation, they understand that. It is not separated from their work. It is part of the same thing.

So what should an artist do to be part of Primitive London?

Andrew: It is just the way it happens. People can contact us.  Henri: It is more about the spirit of it. They have to understand the approach. Because even if they come with a good collection but are purely commercial driven, we wouldn’t be interested in it. We’re giving an alternative.
Andrew: We’re not about fashion being a luxury item. It’s nothing to do with luxury, in a way that we are not elitist.

You have an online shop. Is online presence as important as the actual shop?

Andrew: We sell through Farfetch but we are also re-opening our online shop with all our styling. We definitely want to concentrate more online. It is very important to have a physical base. Primitive wouldn't be what it is without the shop. A lot of online platforms are great but can be hard to understand because there is no physical place you could go to and understand it. The online side is as important; we use it to show people that cannot be here at the shop, exhibitions or parties.

Andrew: Now that our shop is divided into a store and a studio we are much more efficient. We can concentrate on making Primitive’s collection and our own thing. We’re going to work on making Primitive’s uniform. We will release one look at a time, not seasonal. We’re going to do some events. We’re also having an editorial in Tank magazine very soon. We basically want to do more creative projects as Primitive – Henry, Lui and I. Liam Hodges is making an installation at Primitive. This is something exciting to look for. 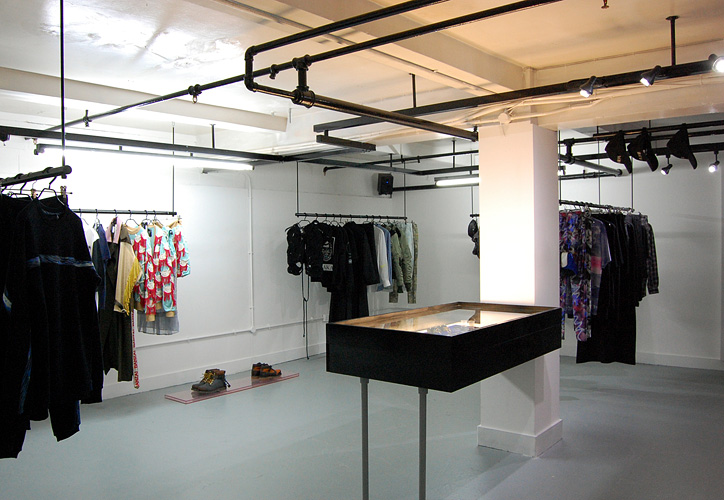 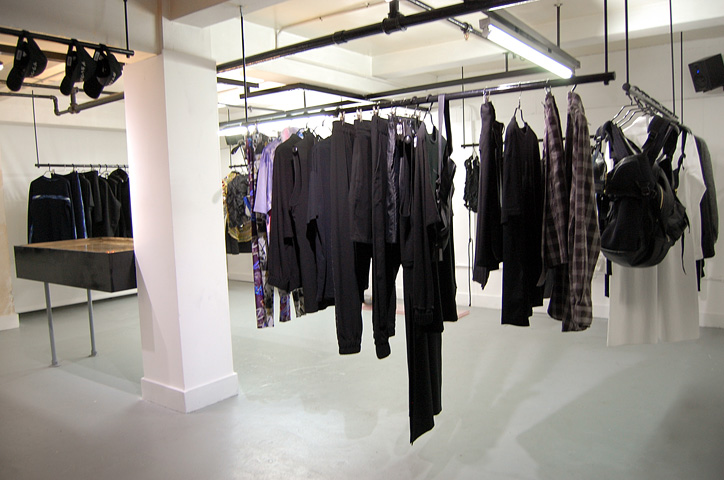 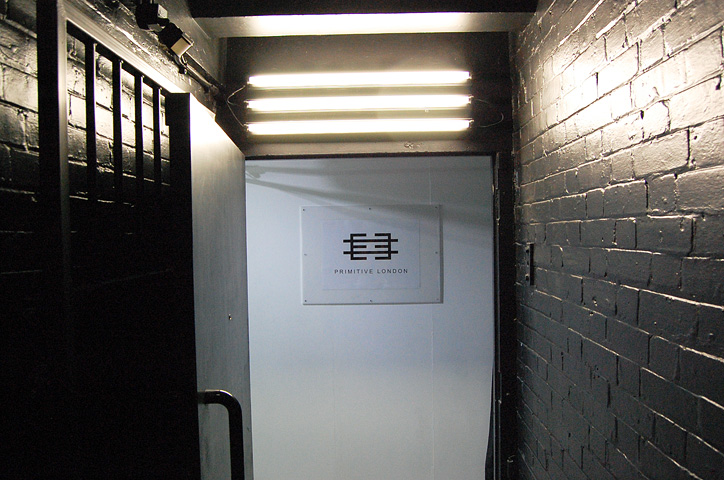 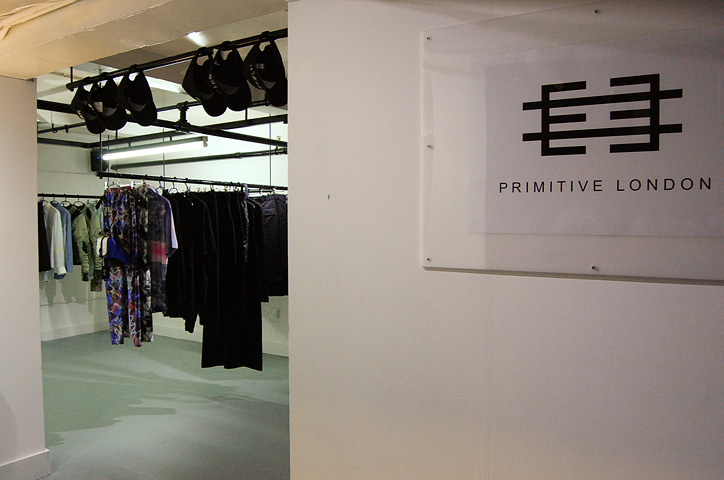 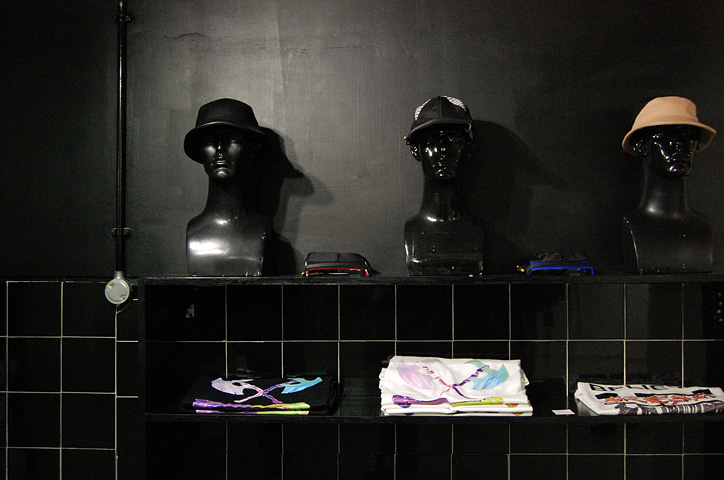 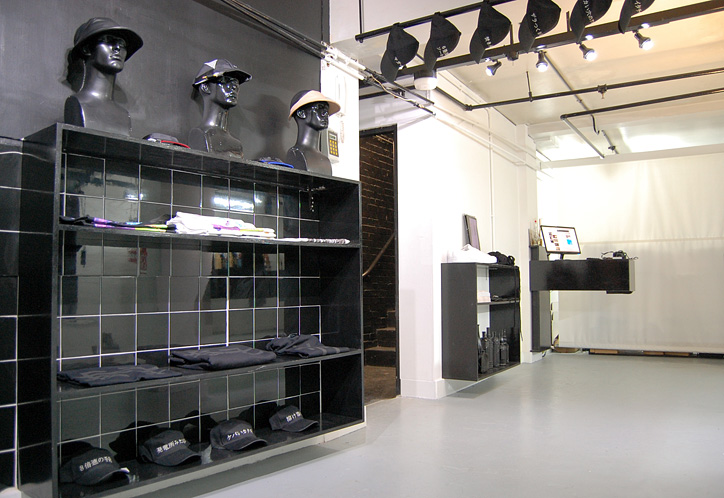 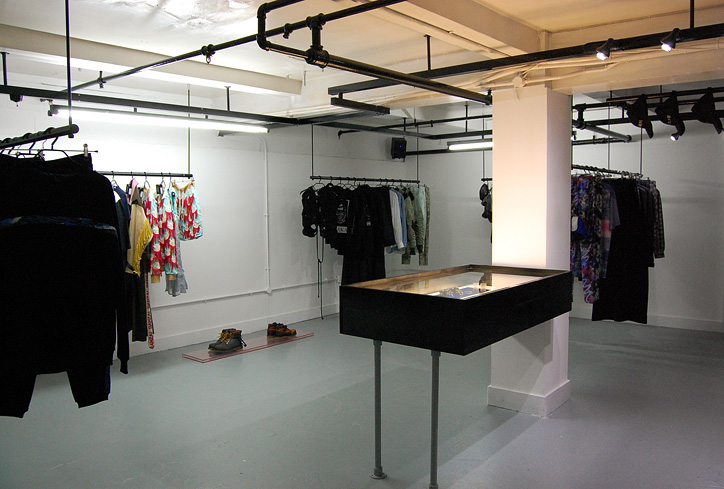 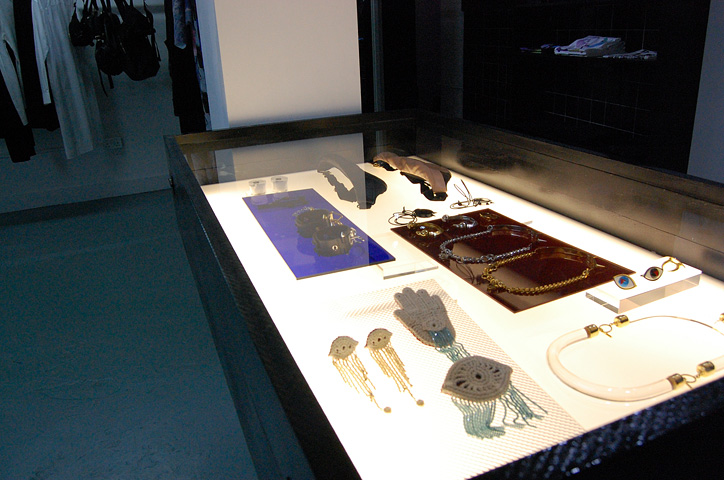 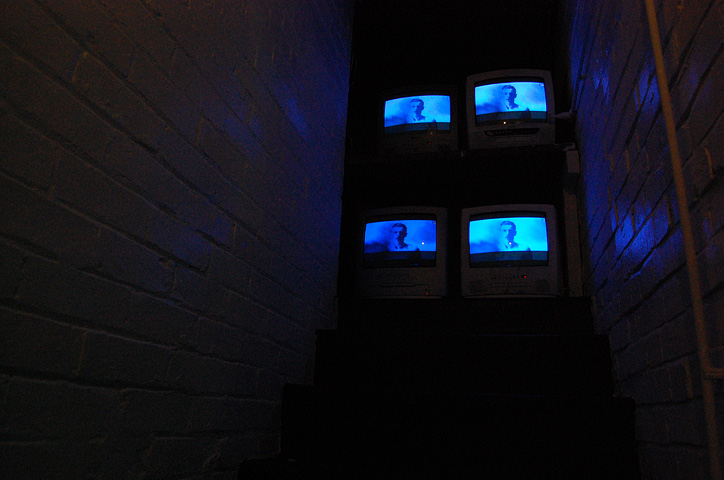 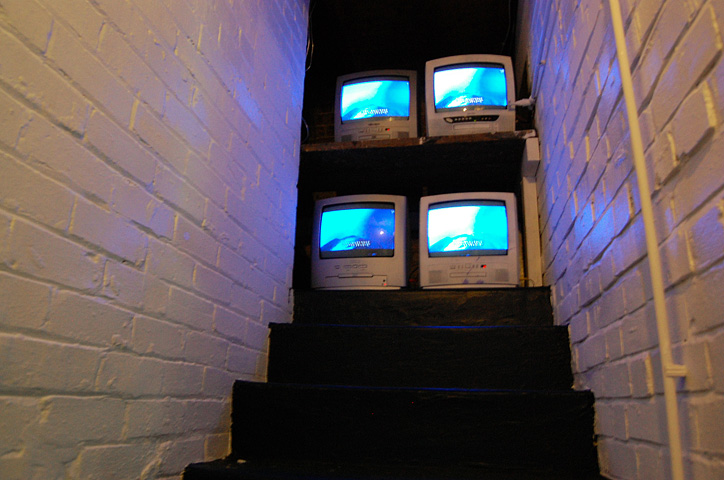 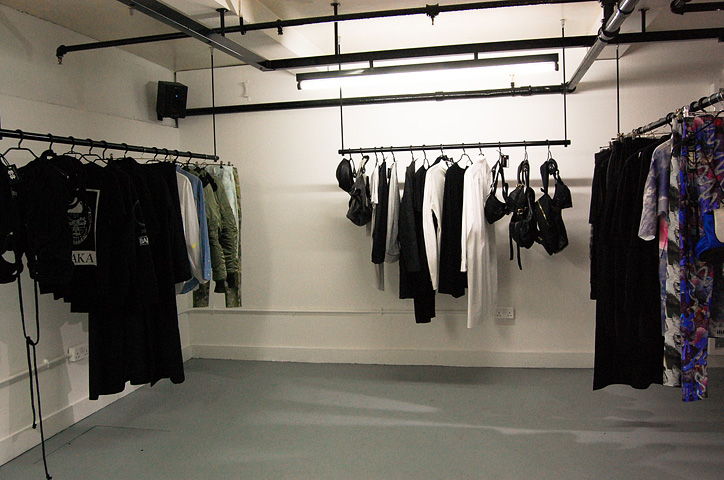