Where different is normal 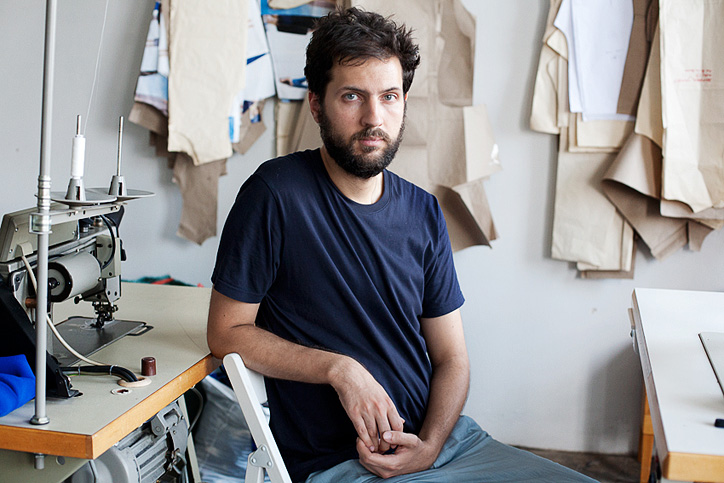 Vladimir Karaleev is a Bulgarian born fashion designer who moved to Berlin to study fashion design at 19. As a teenager, he reacted against Sofia’s sartorial conservatism by making clothes for himself and his friends for techno parties. When deciding where to go for University, Berlin was a natural choice – he already spoke German, and Berlin in the early 2000’s was on the cusp of something new. Since then he has created collections that are at once elegant and disheveled. He pokes fun at fashion by combining fabrics like neoprene and organza, yet manages to leave everything beautiful and understated. I got to hang out with the funny, chilled-out and immensely talented designer at his studio near Lausitzer Platz, in the heart of Kreuzberg, to talk about his love for travel, why he loves Berlin, and his most recent collection.

You moved to Berlin at 19 to study fashion. What provoked that decision? Tell me about the lead up to that?

First of all, I was in a German school in Bulgaria where I’m from, I knew the language - so it was a really easy opportunity for me to come to Berlin. The education I could get in Bulgaria in the creative field would not have been as good at the time. Berlin, even back then [in the early 2000’s] had so many fashion schools, it was the obvious choice. The second reason was that my friends and myself were really into the techno rave scene from the 90s - so Berlin was the place to be.

Do you think Berlin is still that raw place for new designers to come to?Would you say it has maintained the energy that it had when you came here?

It’s a totally different energy now, but it’s still a very good place to work. I go to Paris and to New York obviously to sell my collections, but it’s very nice to be based somewhere like Berlin. To have a nice studio and apartment – it’s not totally unrealizable, you know. If you move somewhere else it would be harder. Your lifestyle would change. A lot of people move here, and if it doesn’t work out, it doesn't seem like such a huge loss. You can just be here and enjoy your time.

Do you remember what your 19 year old self wanted to be? How does one decide to be a fashion designer?

I was making clothes since I was in school. We didn’t have a lot of choices in Bulgaria at the time. Everything was open but it was too expensive for us to buy designer clothing. I knew fashion from magazines and TV, obviously. When we traveled outside Bulgaria, I always bought so many things. Then I started to make stuff for myself, and for my friends. We went to a lot of parties - and that was a way to express myself. It was difficult. In Bulgaria it’s still very conservative, so it was easy to shock people. If you wore some kind of crazy animal print, people would say, “Oh my God, that's insane!” So that was fun, and it was exactly the time when you wanted to be different – I was 16. In Berlin, different was normal, and when I started to study here I felt like this is where I could be myself.

Looking at your clothes, there’s obviously a huge process behind them, and clearly an intellectual one as well – the geometry you reference in your work, for example...

Yes, we did do very geometrical shapes [this latest collection]. It’s kind of a new thing, in a way, for me. My previous collection had a lot of folds and drapes. I started out like that. I love working on a mannequin and before we started this collection I was working, and trying things out. I was thinking, for this collection, I want the folds to have some kind of volume, like the shapes. For the patterns, we thought about 90’s surf prints, with lines and squares - which is another reference to the 1920’s formalism of Kazimir Malevich. I also drew from the constructivist movement from the 20th century. Creating clothing is like creating compositions. It’s proportion, color and shapes.

There's a collision in the fabrics you select as well. You have neoprene, organza…?

This was very interesting when I started. I made a project of clothing only made of jersey. It was at a time when jersey was only really used for casual wear, and you could really only buy a t-shirt in jersey. Then everybody started to work more with jersey and draping because it’s stretchy it always fits the body. It was at a time when I wanted to explore things like that. I was always interested in deconstruction, so actually in school a lot of my projects were about destroying old clothing and making new. I remember I used to buy sports jerseys upside down, and make everything distorted. Now I’m very interested in different structures with different fabrics – neoprene is a very technical outdoor fabric. You can combine these fabrics with expensive organza, which is fancy and lady-like. It’s fun to make things clash.

Your clothes appear to be almost contradictory in that sense. There’s luxury and elegance, and then a sort of disheveled aspect.

I don’t want the clothes to be taken too seriously. Everything is a bit strange when you look at it twice. It’s not like a mainstream product, it’s like a niche, but there are tons of people looking for something special but they don’t want to scare everybody. We always try to hug everyone with one collection. From my experience, my clients always want something special, but not something that will scream at you, you know. I am always surprised to see different people in my designs. Each person has his or her own interpretation of the clothes. One dress can have so many meanings - it depends on the context. What I’ve realized is that a lot of people don’t want to show off so much, they want to wear clothes for themselves. They don’t buy clothes because of the brand. They buy my designs because they like it, and want to own it, and I like that idea. 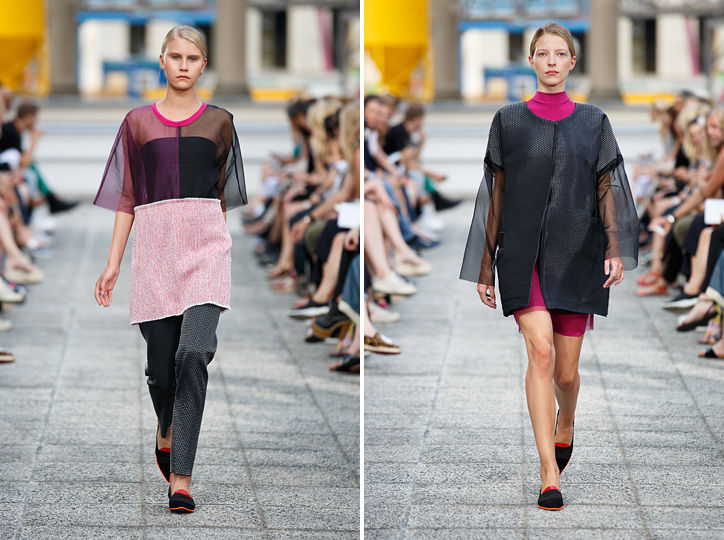 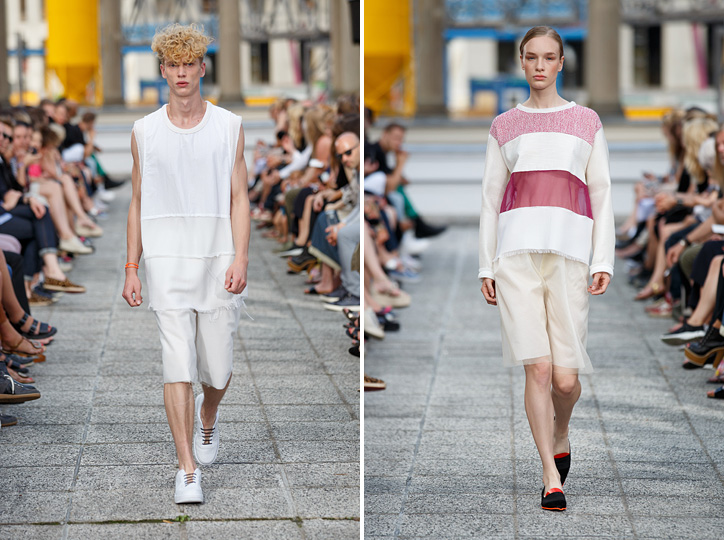 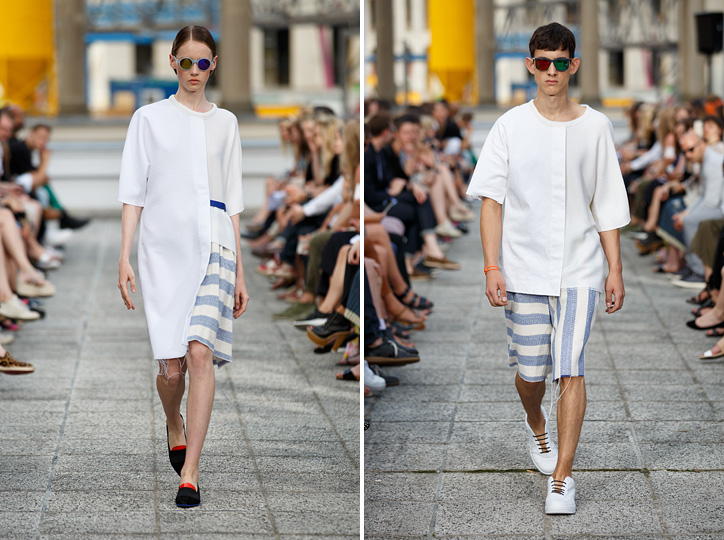 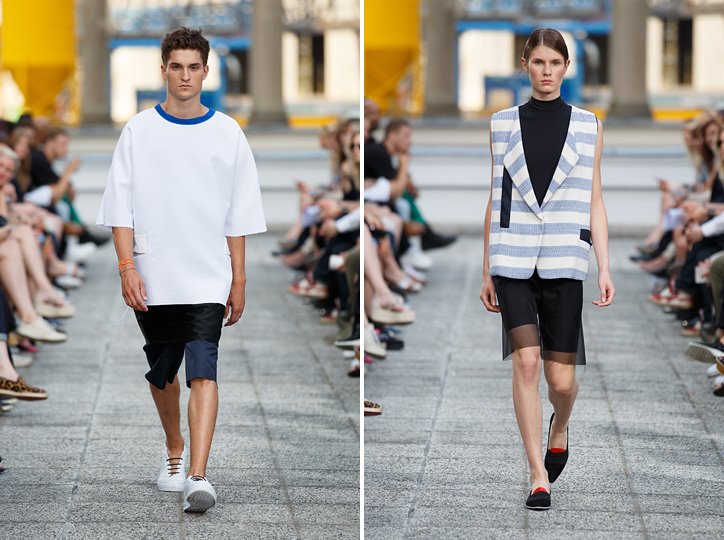 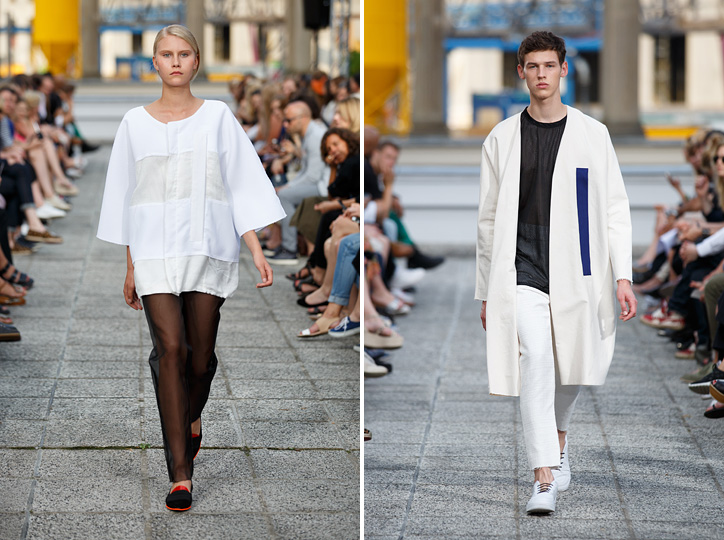 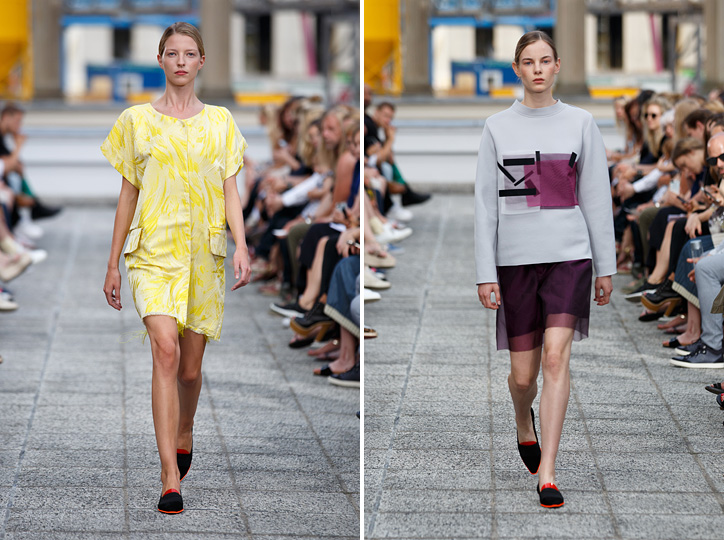 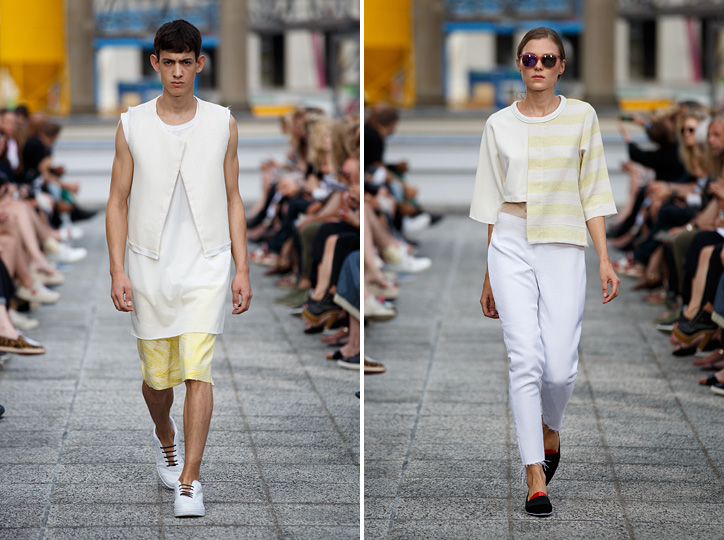 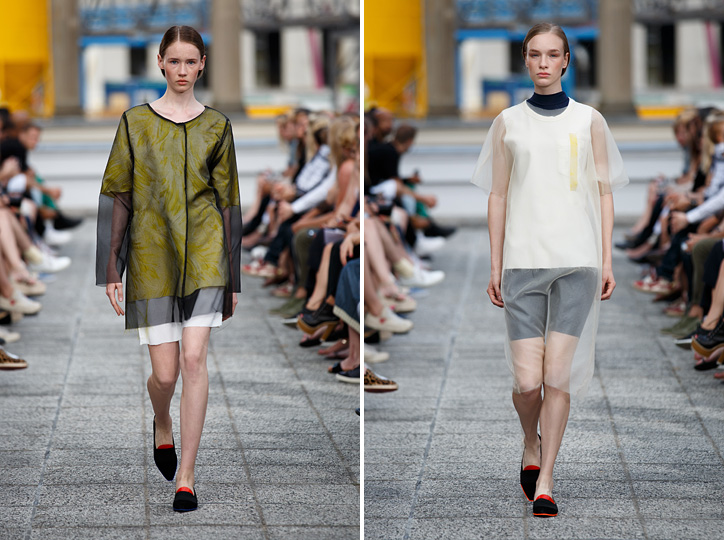 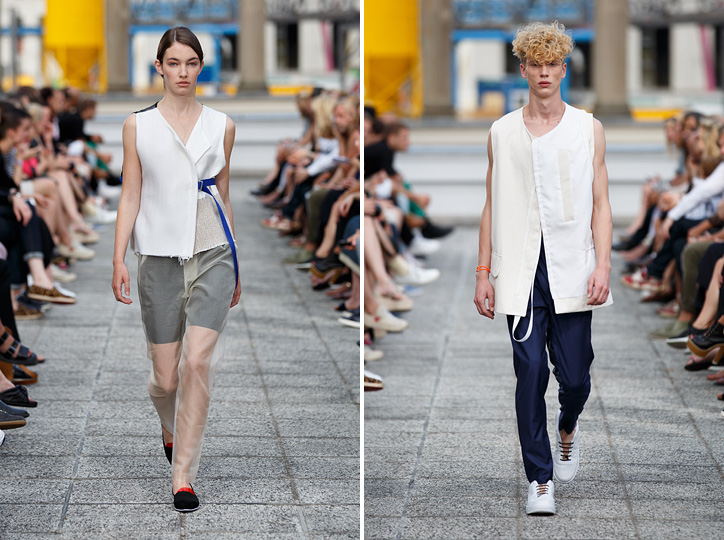 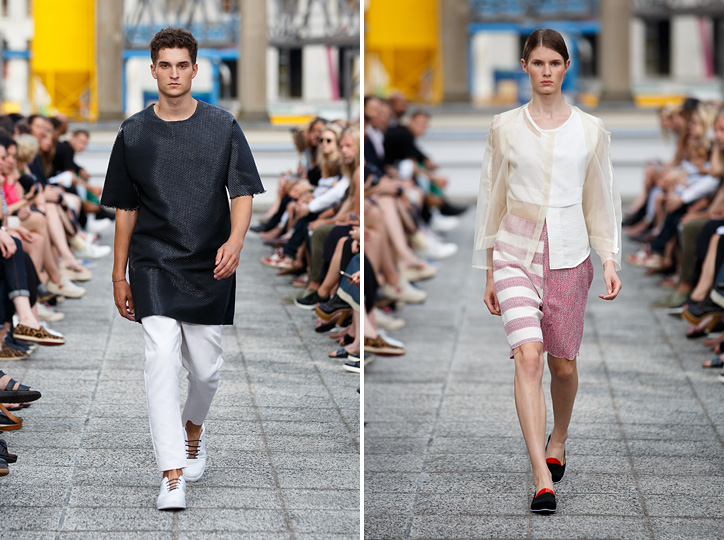 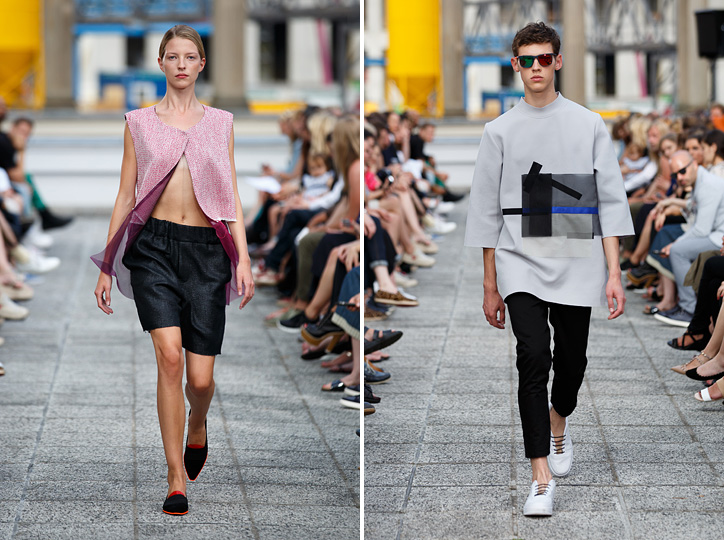 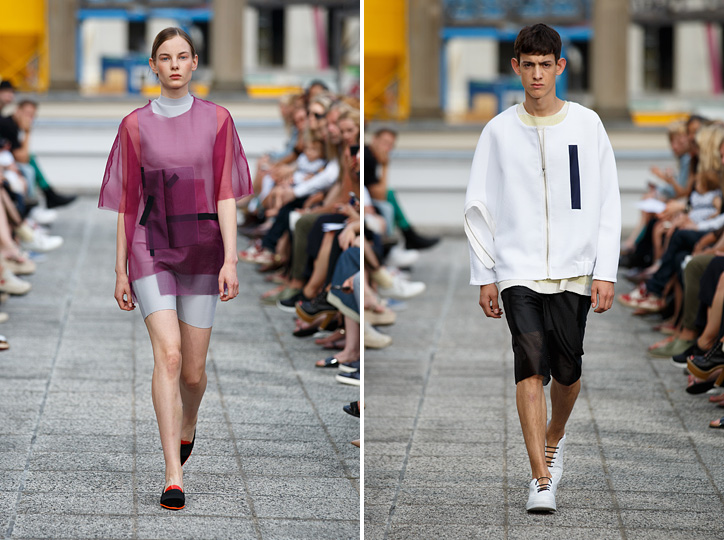