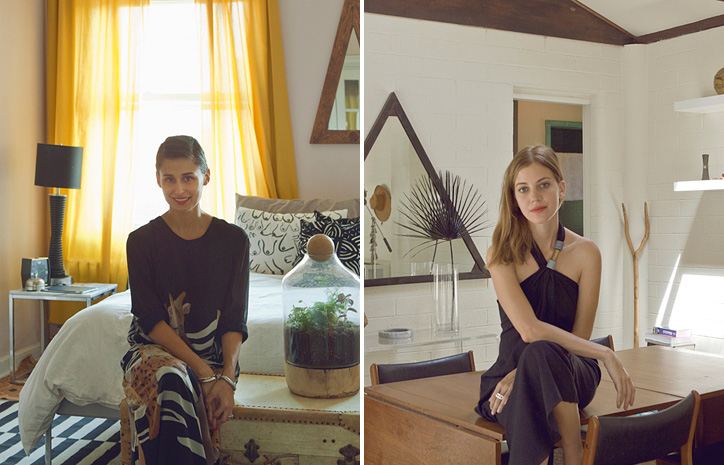 It’s been nearly 10 years since designers Sophie Buhai and Lisa Mayock launched their line Vena Cava, known for its feminine but striking look, with timeless silhouettes, bold patterns, and the kind of wearbility that begs the question, “Who made that?” At the time, the two were fresh out of Parsons School of Design, and the brand has since seen a decade’s worth of evolution. After a brief period of uncertainty, last year they re-launched Vena Cava’s lower-priced sister line, Vena Viva, with a hilariously satirical video starring Lizzy Caplan. And now, the duo has a special project under way that will be announced soon.

After working together in New York for over eight years, Buhai recently moved to L.A., putting 3,000 miles between the designers’ home bases. But their style is as symbiotic as ever and the look of Mayock’s Williamsburg abode and Buhai’s Silverlake bungalow is equally enviable to their fashion aesthetic. The women gave us a peek into their lovely, impeccably curated homes, and a tour of some of their most treasured belongings.

How did you meet?

Sophie: Lisa's from Pasadena and I grew up in L.A. A friend introduced us right before we went to college at Parsons.
Lisa: She set us up on a little blind date, which was awkward ’cause we were both really shy at the time. We went out to lunch and realized that we had the same favorite thrift store that was kind of a secret spot. We went shopping together there and totally solidified our friendship over thrift store shoes.

Sophie: It’s changed certain things for the better. We’ve worked together so long, we know exactly what the other person would do so if anything, it’s just allowed us to get more done because we can divide and conquer and then come together on things when we need to.
Lisa: In the beginning we always did everything together. Slowly we figured out, OK, who’s better at managing the production part? Who's better at managing the financial part? Obviously we collaborate on everything but being in two different places has necessitated that each of us own a little bit more of what we're in charge of. I think we've both really realized how much more we can get done when we're not having a 20-minute conversation about a button [laughs]. We just trust each other to make the right decision.

Sophie, I imagine your sources of inspiration are different, now that you’re in California.

Sophie: We’re both from L.A. so it’s always been a big part of the brand DNA. L.A. seems to be having this little renaissance, there's a lot going on in the art world, and in fashion. It’s a really cool time to be here so it’s been interesting absorbing that and filtering it back into the brand.

How would you describe the evolution of Vena Cava?

Lisa: In the past two to three years I've noticed the work that we're doing for Vena Cava definitely feels a bit more grown up and more elegant and I think that comes from us growing up. When we started the line we were 21, and that's been just about 10 years. We're not 21 anymore and the things that we want and the things that are important to us have totally changed. The work is definitely evolving in a way that’s a reflection of who we are. 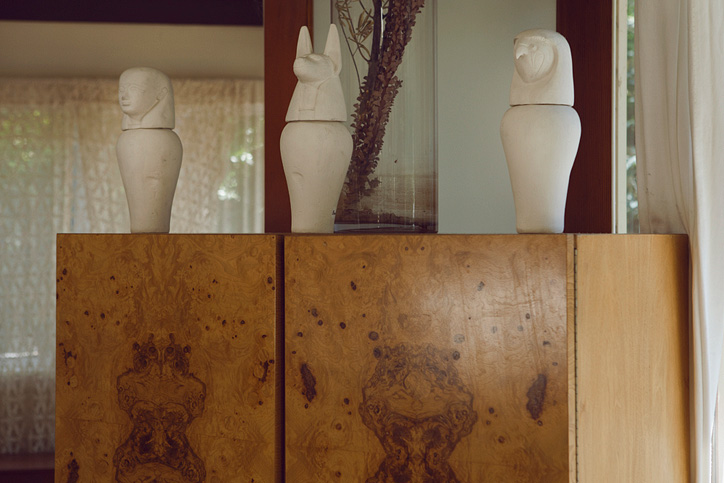 I got these urns in Palm Springs, CA, at an estate sale. I think they may have been part of a set decoration or a prop for a movie because they have the name of a studio on the bottom. They're strange and beautiful. We did an Egypto-mania collection about six or seven years ago and I got really into researching Egypt and a lot of the decorative motifs and symbolism. I feel like they watch over me. 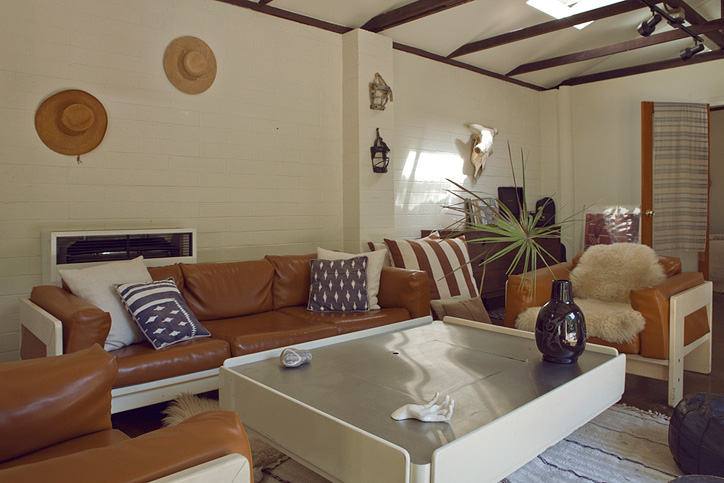 My parents got married in 1974. They eloped in Paris. They're very cool, they had only known each other for six months—that's the kind of stuff people did then. This was their first set of furniture. It's very ’70s disco, you can just imagine the things that happened on this table. I remember being a kid on this furniture, it was in our living room forever so it's sentimental. When I moved [to L.A.] we got it out of storage and it fits perfectly. It's really comfortable, somehow still looks very modern, and it’s my favorite color—a rust caramel. 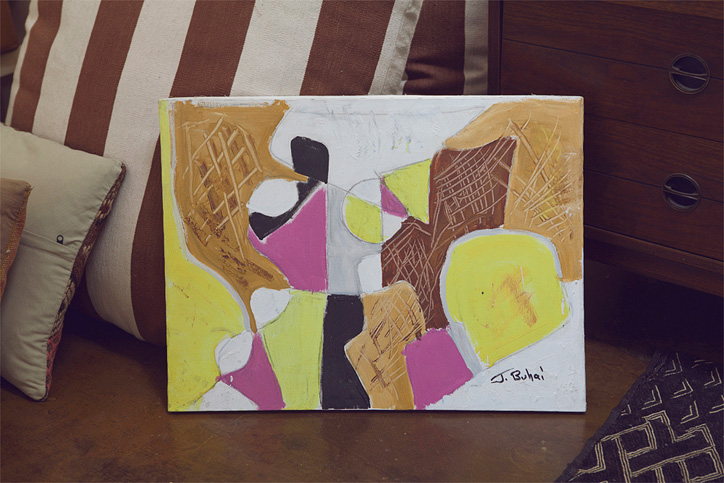 My grandfather is an abstract painter who lives in Palm Desert, CA. He has about 500 paintings in his garage and nobody’s ever really seen them. He's just like a total outsider artist. He didn't start painting until he was in his 70s, and now it's all he does. What I love about it is, he's colorblind so all of the colors in his paintings are so weird and not calculated because he sees colors completely differently. So he does really interesting combinations of, like, pink and brown; the greens and the grays are always off, but in the best way. Someday I'm gonna organize a show of all of his artwork and sell paintings for $50. We'll have a big Grandpa Jim art opening. 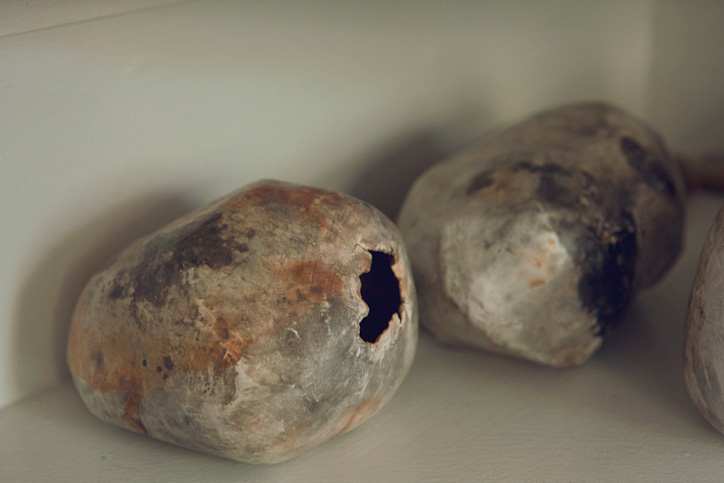 These are sculptures that my aunt made for me as a wedding gift—I got married last year. She lives in New Mexico and is really into ceramics. She used a firing technique where you bury pieces underground. They look like big rocks and they're some of my favorite things in my home. They look beautiful as a group because they're similar objects but the glaze is slightly different on each one so they look great displayed in a pile. 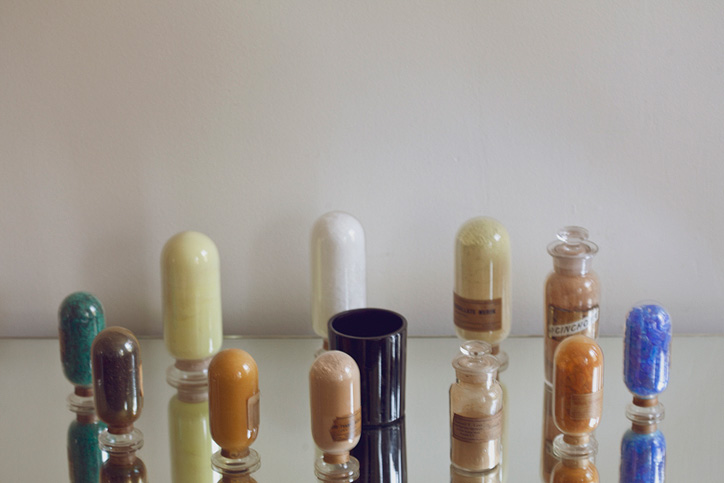 These are 18th- or 19th-century display chemicals for a pharmacy showing compounds that would be used in medicine that the pharmacist would make for you behind the counter. I got them at a flea market three or four years ago—the colors drew me in. Apparently they're also extremely poisonous and they're right next to where we keep all of our dishes and plates, which is probably the worst place ever but we've been pretty lucky so far. [laughs] 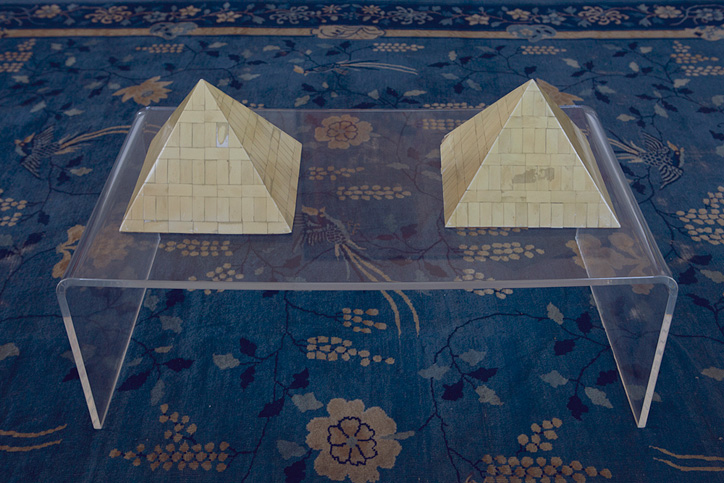 I got these on a trip to Buenos Aires that Sophie and I took for a fashion show, five years ago. Buenos Aires is may be my favorite city that I've ever been to. It looks like someone took Paris and sandblasted it—it’s so beautiful and old. Their economy was really raging in the ’20s and ’30s, so all of their antiques are from that era. These pyramids are made out of cork and covered in tiny tiles that are made out of bone and then glazed. I stayed in Buenos Aires for an extra five days. Maybe it was something about traveling alone, but I have such a love for that city. The pyramids remind me of that trip.