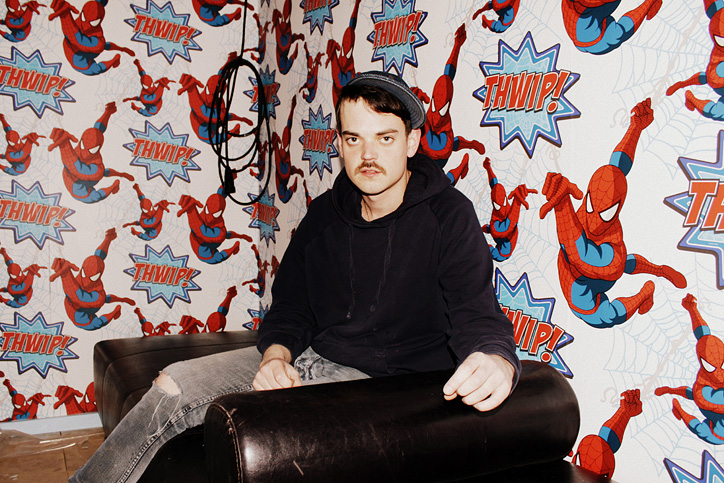 Berlin-based Swedish designer Thomas Bo Nilsson conceptualizes and actualizes spaces as the foci for his large scale, interactive installations. After graduating from the School of Architecture at the Royal Academy of Fine Arts Copenhagen, he joined and became an artistic director with SIGNA (a Danish-Austrian artist collective who primarily does stage performance installations) and has earned three nominations for stage designer of the year by German theatre magazine Theater Heute. His prolific portfolio spans several mediums including photography, film and theatre, and his work with SIGNA has seen him contribute as a costume and set designer, director, and actor in constructing site-specific, immersive endurance installations that have tended to go for hours, days or even weeks and encouraged audience interaction and participation.

His newest (and SIGNA-unrelated) project MEAT continues in this vein and pushes this concept further by incorporating online spaces that may be visited by audience members digitally, as well as the 240-hour long physical installation beginning at Berlin’s Schaubühne-theatre in early April. We sat down with Thomas to chat about IRL, URL and everything in between.

How do you approach design? What role do spaces, locations, concepts and personae play in your overall approach(es)?

My educational background is as an architect, and though I don’t work as an architect in a traditional sense, the space, be it constructed completely as in MEAT or a redefinition of existing spaces as with the work I did in my previous collaborations, does form the foundation for the entire concept.
For MEAT, I wanted to work in a neutral space and construct a fragmented reality that was both raw and realistic. Even though the studio in Schaubühne is that neutral space I was looking for, I do find myself drawing inspiration from the surroundings of where we work.

What are some of the themes you have explored in past projects? How do they relate to or differ from your upcoming installation MEAT?

Preferably, I don’t speak about the themes and topics I see in a project. I don’t want what I see in it to form a road map for the spectators whilst visiting the installation. I can discuss if after, but not before. I don’t believe that art should be explained by the artist.

The apprehension of Canadian pornographic actor model and alleged cannibal killer Luka Rocco Magnotta in a Berlin internet café in 2012 has been described as the starting point for exploring an “entire lifeworld”. Why did this event in particular prompt the installation?

I gained interest in the case when Luka was found in an internet café close to where I live in Berlin. The night before, he was supposed to have spent the night in the same night club as me. The absurd feeling of being star struck by evil or having brutality on your doorstep, triggered my interest to read more about the case. In my research I encountered material from Luka’s former professions, his self created online personalities and the many fan pages dedicated to him.
When Julian Eicke, with whom I collaborate on the set, drew my attention to the images published from Luka’s Montreal apartment, we decided to use this as a starting point for the development of the concept. The installation does contain a replica of the apartment that some audience might find, whilst others might not.

People seem to be able to experience MEAT in a variety of different ways, and the way they engage seems entirely up to them. What were some of your reasons for exhibiting the installation over a range of platforms and utilizing varying modalities? Does it relate to the subject matter directly?

It is correct that audience is invited to choose their own level of interaction, and that they can choose to experience it as a short movie, interactive live stream or in direct contact with the participants of the installation. Preferably they would experience it in all these forms.
It does have it’s origin in the fact that the starting point for the concept has been the case of Luka Magnotta, or rather the way he used different medias to promote himself and the video clips he allegedly made. It’s also spinning off the fact that the installation can be experienced as very realistic or very constructed, depending on from which media it is experienced.

How did you come to collaborate with Matt Lambert for the promotional video? How does it relate to the installation?

I was familiar with Matt and his work from before, and felt that for this specific project it would be perfect to collaborate with him. As I didn’t have a finished installation to work in until the very last days before the show, I decided to have the trailer shot in an existing space.
It takes place in a spätkauf (the Berlin version of off-licences) on my street, where you can enter a small bar behind a shelf, that leads to an even smaller internet café. In the trailer you can see a selection of participants that you will encounter on the online part of the show and inside the installation. Our project contains a secret amount of rooms, some direct replicas of existing spaces, some spaces that have a certain flavor and some that you can never visit but only observe through streaming. The spätkauf is one of these three options.

How have you chosen to design the space? When designing, were the ways it might be live broadcasted as well as the ways people can interact with the space and characters a major factor?

As we are living in the installation for 240 hours, it has to of course function for living as we have no assistance from the outside and no backstage rooms. All we do during these hours, we do in the installation. Our participants have been taking part in discussions and rehearsals since the start of the year, where we develop possible actions that could and will take place during the project. It is however impossible that two spectators take the same route through the installation, that's why each and every one visiting will have a different experience.
I would prefer if audience enters the installation several times during the ten days, and preferably at different times a day (or night).

MEAT is on at Schaubühne Berlin from April 3rd-13th, 24 hours a day, in the scope of F.I.N.D. international theater festival. Tickets available here.