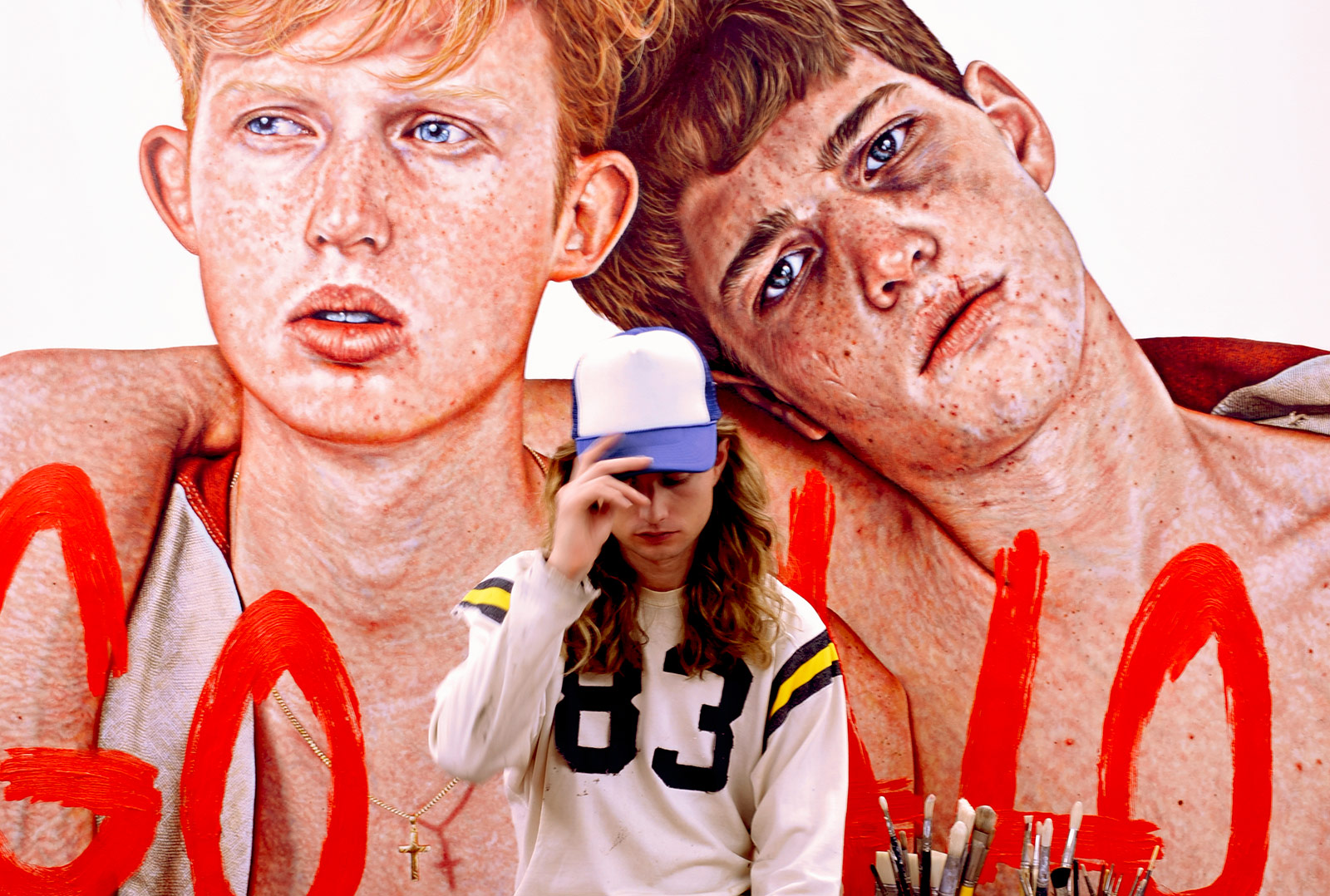 Innocence and corruption, right and wrong, ideal and real, youth and experience... The thin frontier that separates these controversial concepts is where The Kid finds his zone of experimentation. His accurate and delicate technique opposes the harshness of the issues that he approaches, while creating uncomfortable images that don’t leave the viewer impassive. On the contrary, his work attempts to challenge people and to spark the debate. And these kinds of provocative reactions are probably what will take place at the upcoming Art Paris Art Fair, where he is participating. It is hard to believe that this 24-year-old contemporary artist has not received any kind of formal training – and despite the virtuous technique of his pieces, they also contain such a deep level of concept. We talk to him about all these ideas and much more.
Tell us about the beginnings of your relationship with the artistic matter. How did you start mobilizing your projects?
As far as I can remember, even as a child I’ve always felt compelled to draw, paint and sculpt things to create my own world to escape in. And already at that time, I had a very clear vision of what I wanted to do. I hated school – I couldn’t deal with its small-minded authority and its cookie-cutter way-of-thinking. I did not fit the mold, and that generated a lot of struggle for me. But, in the end, not to fit in was a blessing, and still is! So I left home in my early teenage years to travel, doing multiple creative jobs on the side. After a few years, I felt it was becoming vital for me to stop adapting myself to other people’s visions and to put my own vision out there. So for several months I threw myself into creating my first wall-size charcoal and oil-pencil portraits on paper. And as destiny would have it, I met Anouk Le Bourdiec, the young and passionate founder of Galerie ALB in Paris. She believed in my vision and immediately exhibited my first series of works God Is Dead and Humanity Is Overrated. That allowed me to start working full time on my artwork and create the following year my first solo show, ENDGAME, a reference both to a situation in chess when the outcome is known and inevitable –which Marcel Duchamp was obsessed with–, and to the play of Samuel Beckett, in which the end is announced as of the very beginning, just like the destiny of most of the young subjects my works are based on.
It was at this show that I presented my first wall-size Bic drawings and life-size silicone sculptures, and I have had the great chance that all my works immediately left for collections in France and abroad. The early support of people like Carine Roitfeld, who sent journalists from New York to do a reportage on my work, certainly helped. Funnyly enough, I’ve just heard that my first sculpture Do You Believe In God? has been selected by the art-collectors association ADIAF to be exhibited at the upcoming Contemporary Art Institute’s Triennal, and that one of my first drawings of the series God Is Dead has been appointed to be integrated into the art collectors’ museum Now Is Our Future at the upcoming annual edition of Drawing Now. 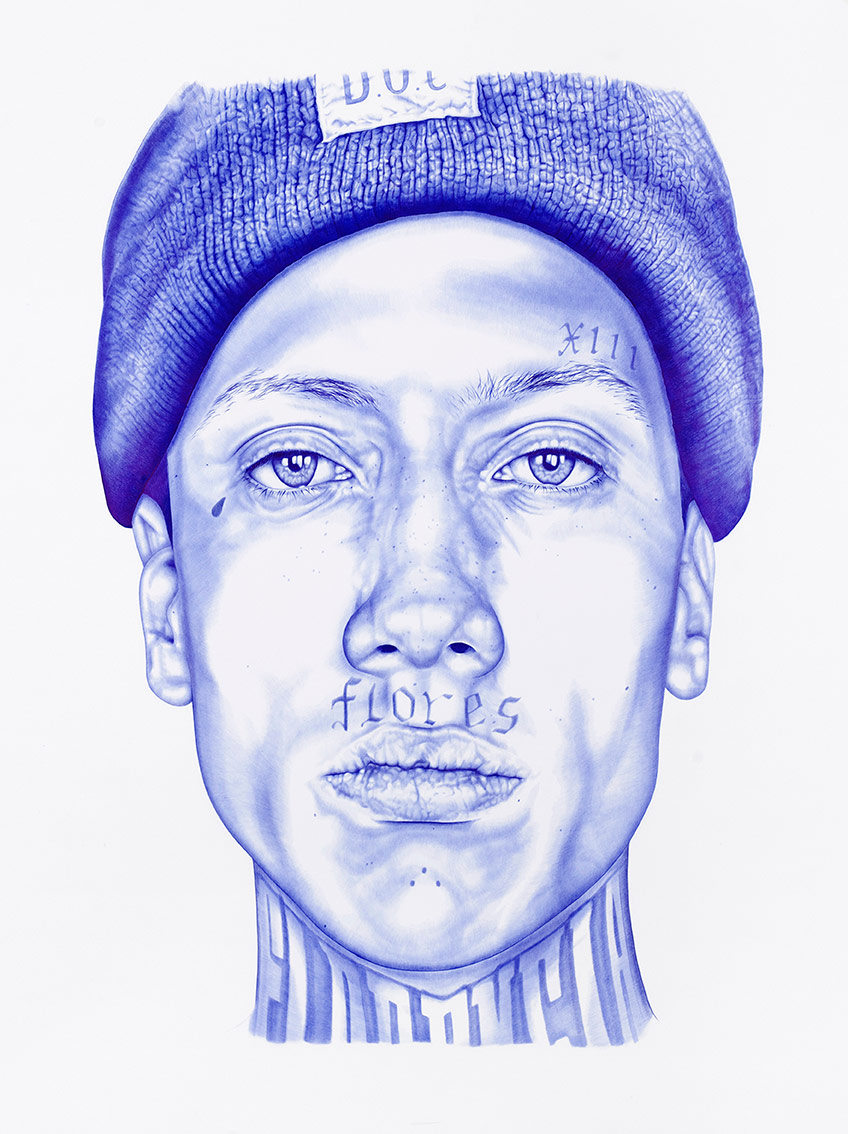 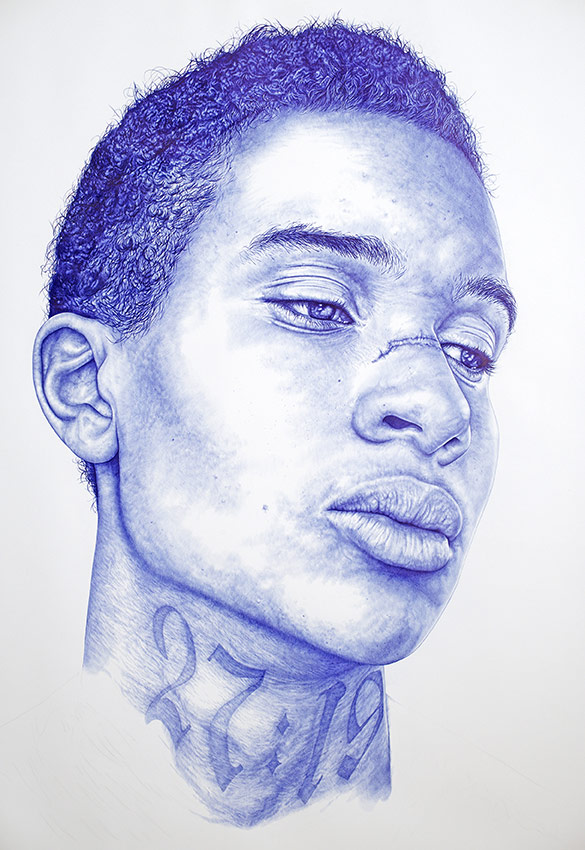 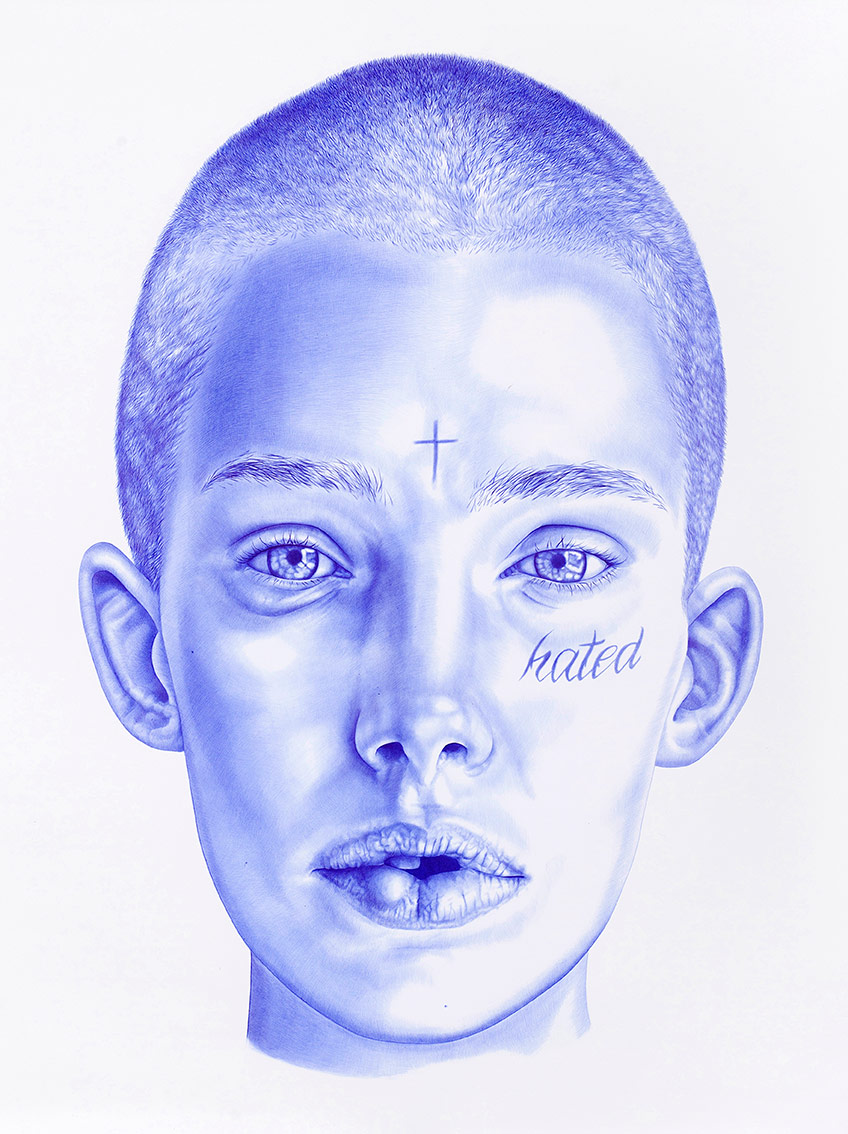 Talking about museums and institutions, how do you deal with these spheres where the average age is over 40? Are you given the same treatment despite your early age?
Of course I’m the young kid on the block, so it definitely means I need to work harder. Though it seems to me that art institutions are much more open to young contemporary artists nowadays. But to be honest, it’s not something that really occupies me. What I care about is that my work speaks to everyone, from the man in the street to the seasoned collectors. I believe art should be for everyone, just like education and freedom!
What is the profile of the buying collectors who are interested in your work?
It’s hard for me to say, as my works have left for very diverse collections and continents. However, be it private or corporate collections, I feel what most of my collectors have in common is that they don’t consider art as a decoration for their living room or as a pure speculative investment to put away in a warehouse, but rather as something that has to move them on a very intimate level as well as challenge people and provoke debate.
You are a very committed activist against unfair social discrimination and inhumane juvenile justice. Is art a powerful tool to denounce these social issues?
Definitely, I think so. For me, art should be about humanity, about society. It needs to reflect its time, to question the public, to spark the debate. Make the people aware by holding up a mirror to them. And it has probably never been so urgent since the last cultural revolution of the 60’s, don’t you agree? 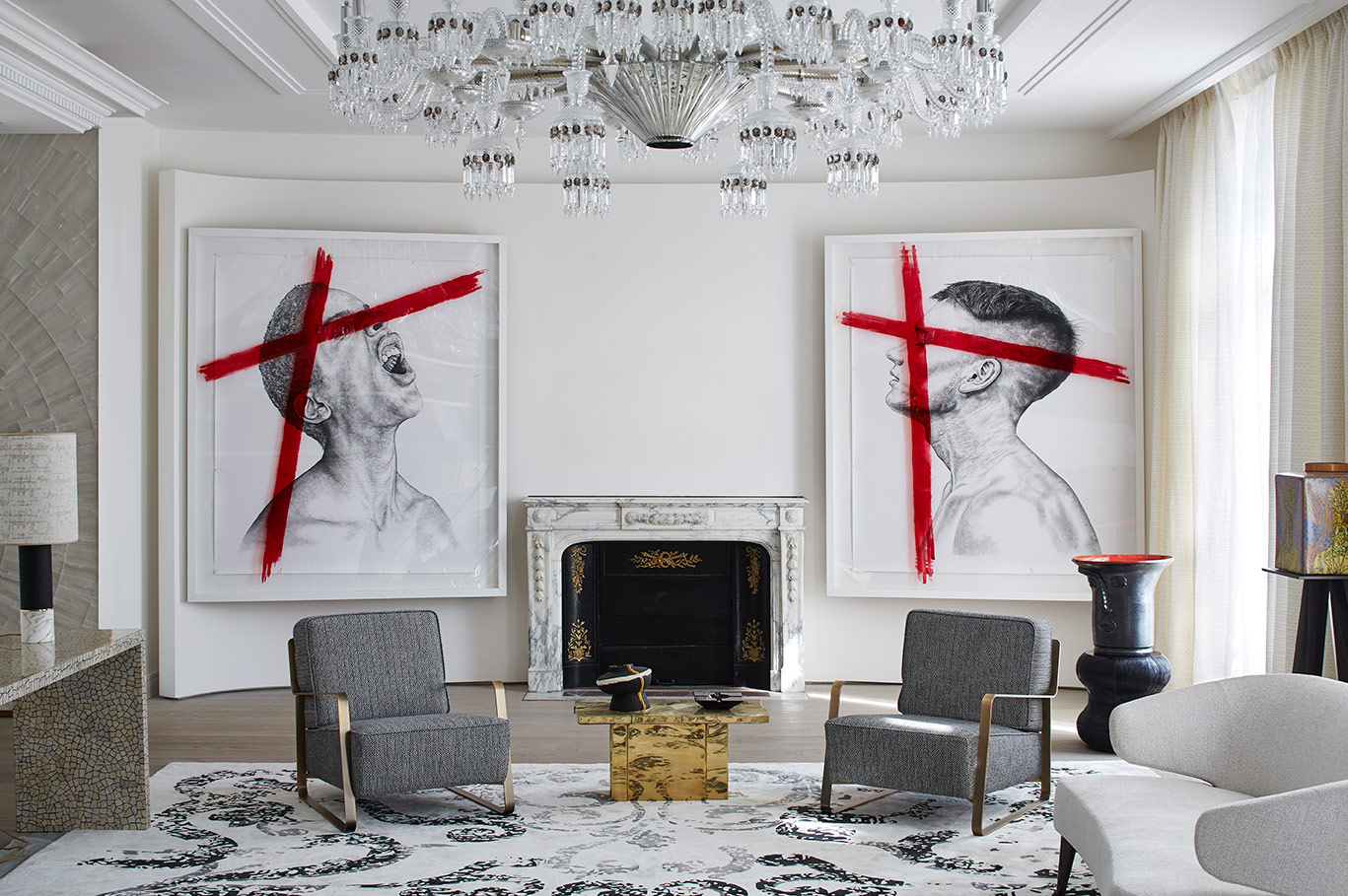 Sure! By the way, we can see how the US flag appears constantly in your sculptures and drawings. What does it symbolize to you?
The Stars and Stripes flag is for me such a powerful symbol of duality, between ideal and reality, innocence and corruption, which makes it the perfect contemporary symbol of the social clair-obscure we are in, and of the blurred sentiment of right and wrong, especially within my generation.
Although your characters are caught in a very shady moment, there is something beautiful and poetic in the way they are represented. Tell us more about this duality.
I’ve always been attracted by this line in The Portrait of Dorian Gray by Oscar Wilde: “behind every exquisite thing lies something tragic.” I think this is pretty much what all of my works have in common. Despite their youth and beauty, all of my subjects are doomed to fail, like a flower is destined to fade. And I try to capture them in their defining moment, forever caught between innocence and corruption.
So, what motivates or inspires you to reflect such provocative and disturbing scenes? And what feedback do you receive from the public?
I think it was Jackson Pollock who said that painting is self-discovery and that every artist paints what he is – it’s the same here, I guess. Although I rarely represent myself, each work is deeply rooted into my personal experience and expresses my fears and hopes. I want to question the audience about social determinism, the thin frontier between innocence and corruption, the equality of chances, or the fading line between right and wrong in our modern societies. The reactions depend very much on the crowd. But good or bad, they’re always intense. A lot of people, from various social and geographical origins, are visibly deeply moved. Often they can even stay for a very long time in front of one of my works, like in a state of personal catharsis. But some works, for example my sculpture Too Young To Die? –a newborn baby in an incubator fighting for his right to choose his own future while his body is already marked by the gang tattoos of the family he is born in– can also trigger controversial reactions. Most often out of misunderstanding, sometimes because of conservatism. I don’t mind, on the contrary! 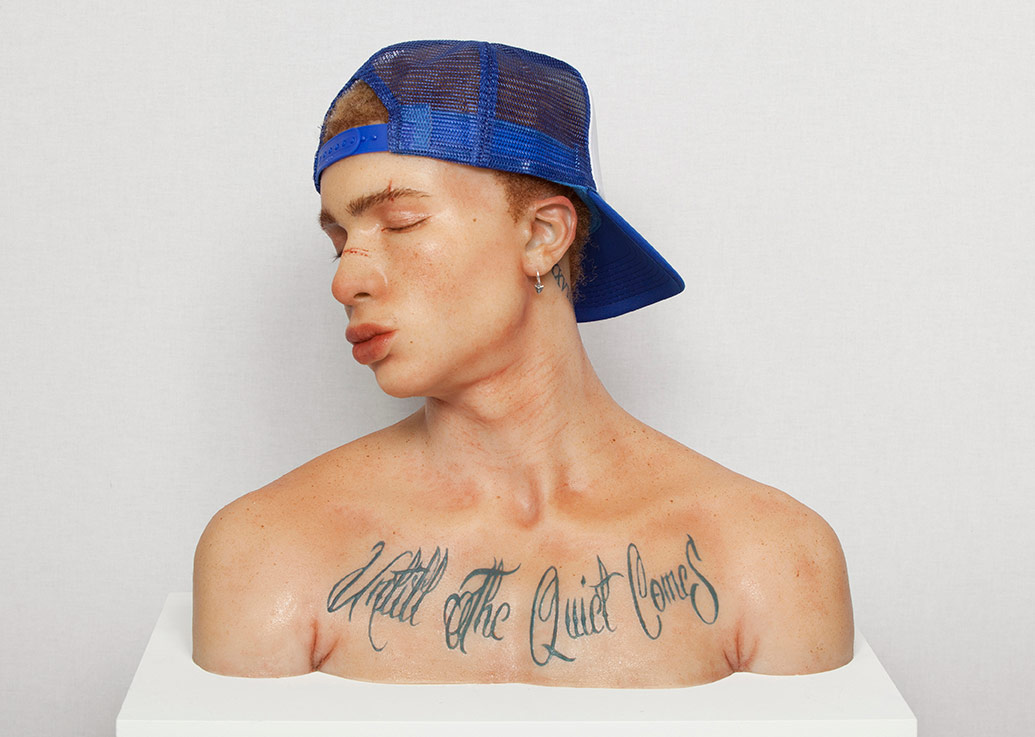 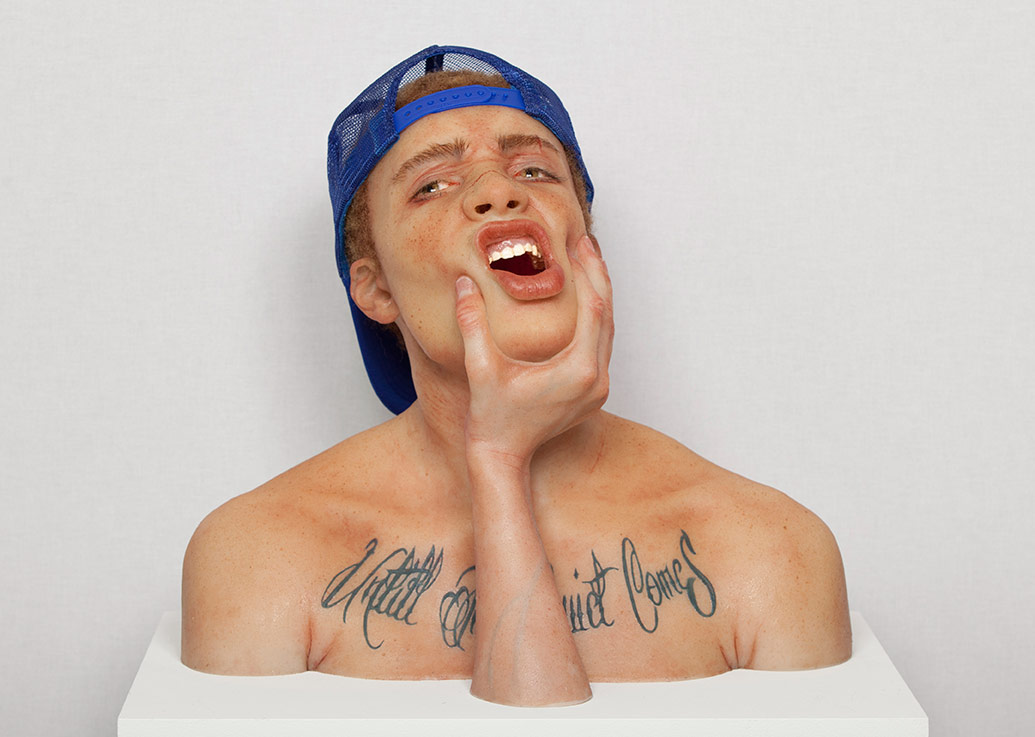 Being a self-taught artist, how have you trained to control the sense of proportion and the technique?
I don’t know; a lot of my technique always kind of comes in a very instinctive and natural way to me. As I said, I’ve had the chance to be very hands-on drawing, painting and creating things since I was little. And I’ve always been able to see the finished work in my head before I start anything. For me, each one of my works is like a very large puzzle, I know what it needs to become. So I start laying down the pieces and of course I encounter difficulties, but I just keep on working until every piece falls into place. And though I cannot stand any form of authority, especially the one that comes with school, I love discovering and researching things by myself, up until the point it becomes an obsession. So if I get stuck, I can spend entire nights searching the internet and Youtube to find a solution.
You use drawing, painting and sculpture to develop your projects. Which is your preferred discipline? And under which parameters do you choose one or another?
I don’t have a discipline that I prefer over another, the most important to me is that it’s effective and fits the story I want to tell. And I don’t like to get too comfortable; I need to constantly challenge myself with new techniques and mediums to keep it exciting. I don’t like things that come easyly; I want to work for it. I need to feel blood, sweat and tears on my fingertips – it’s like an addiction for me! 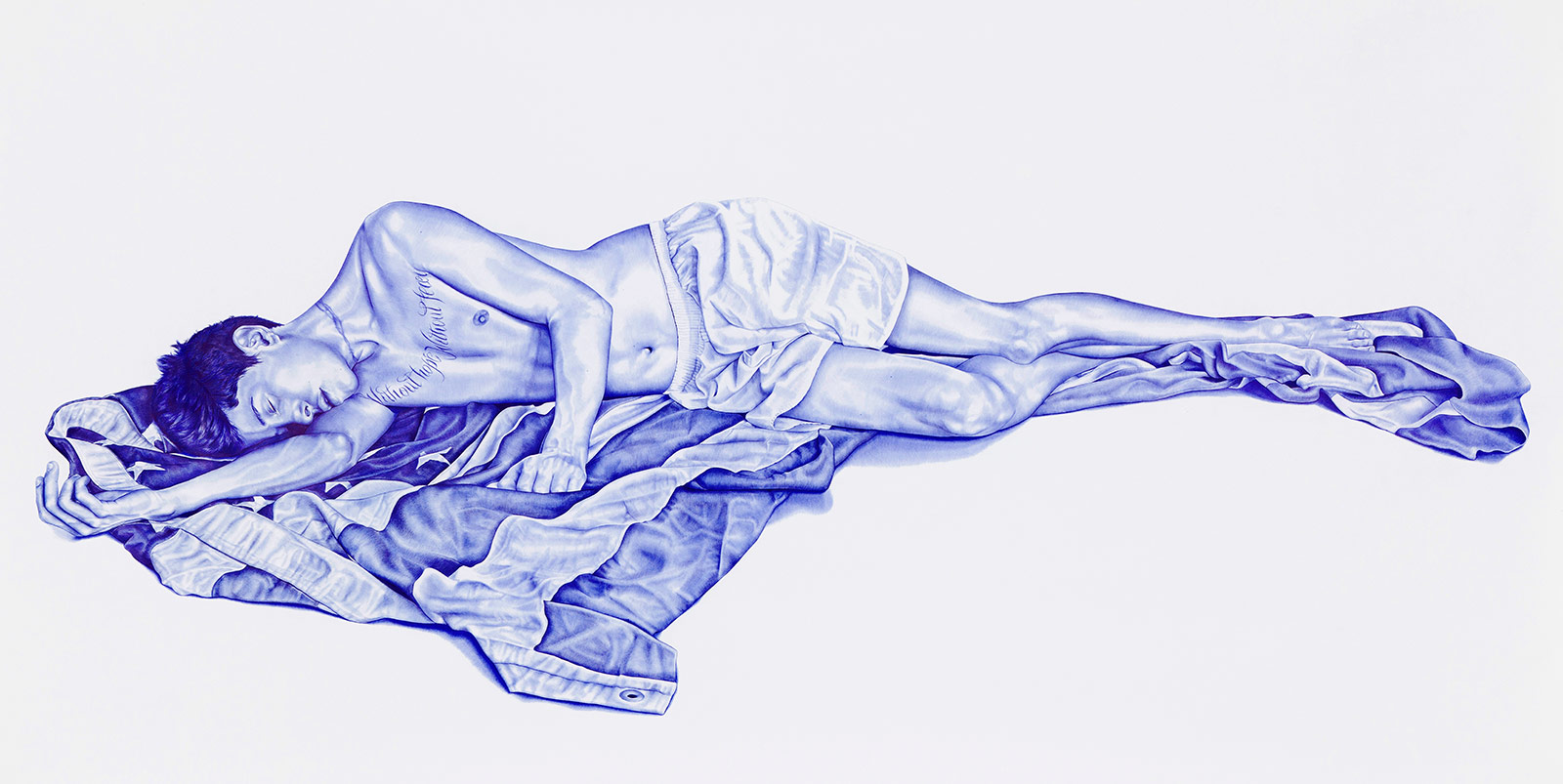 You are participating on the upcoming Art Paris Art Fair for the third time. What are you going to exhibit? Tell us more about the criteria of the selection of pieces.
I want to surprise people, stop them in their tracks and provoke a debate within the audience, as well as challenge myself and keep things exciting for me too! So, for my new show I GO ALONE – Portrait Of A New Lost Generation, I will be presenting exclusively new works unseen before. In particular, four of my very first oil and egg tempera paintings on canvas – the largest being almost four meters long, one life-size monumental hyperrealist sculpture in oil-painted platinum silicone and three busts. I’ve created these new pieces over the last twelve months especially for this upcoming show. Not only because all of my previous works now live their own lives in their new “homes” around the world, but first and foremost because every time I work on a new exhibition, I want to create an immersive experience that triggers emotion and provoke reflection for the viewer.
It is inevitable not to remember hyperrealist artists like Ron Mueck or Maurizio Cattelan while observing your sculptures. Are they references to you?
Of course I know their works, or the ones of the Chapman Brothers and Duane Hanson. As a teenager, it definitely made a strong impression on me. But to say the truth, I’m much more influenced, for example, by Caravaggio and his dark contemporaneity –he was using prostitutes and thieves to paint the Virgin Mary and Jesus Christ and tagging the walls in the streets of Rome with early graffiti like Nec Metu, Nec Spe meaning Without hope, without fear– or by the violent purity of Bernini and also of course by counter-culture movies like Over The Edge by Kaplan, Xavier Dolan’s Mommy or Kids by Larry Clark.
It is all about coherence; your artistic name, your age, the age of your characters, etc. How do you predict the future of this overview?
I do not believe youth has anything to do with age. And anyway, since every child is an artist and what is difficult is to remain one when growing up, as Picasso said, these should be of some help, don’t you think? 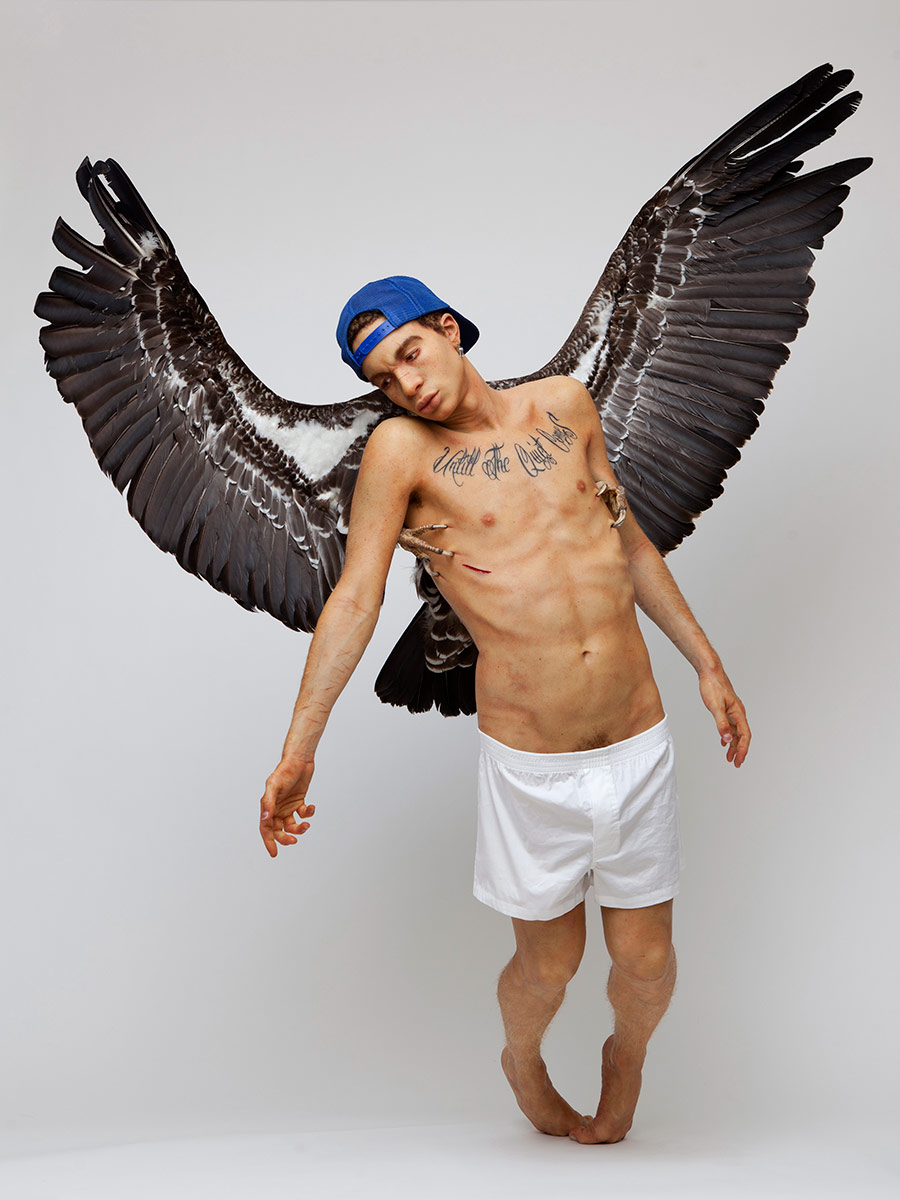 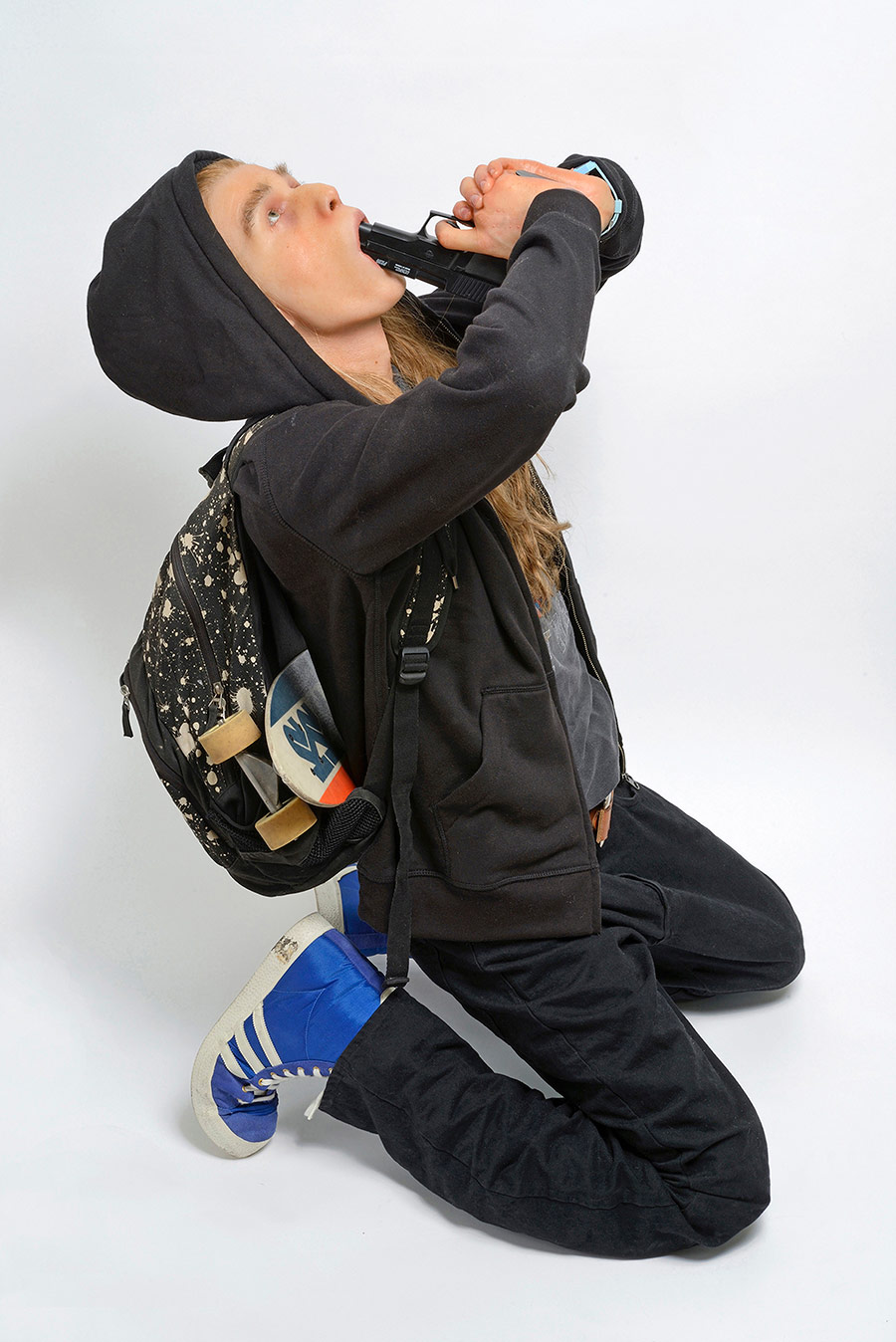 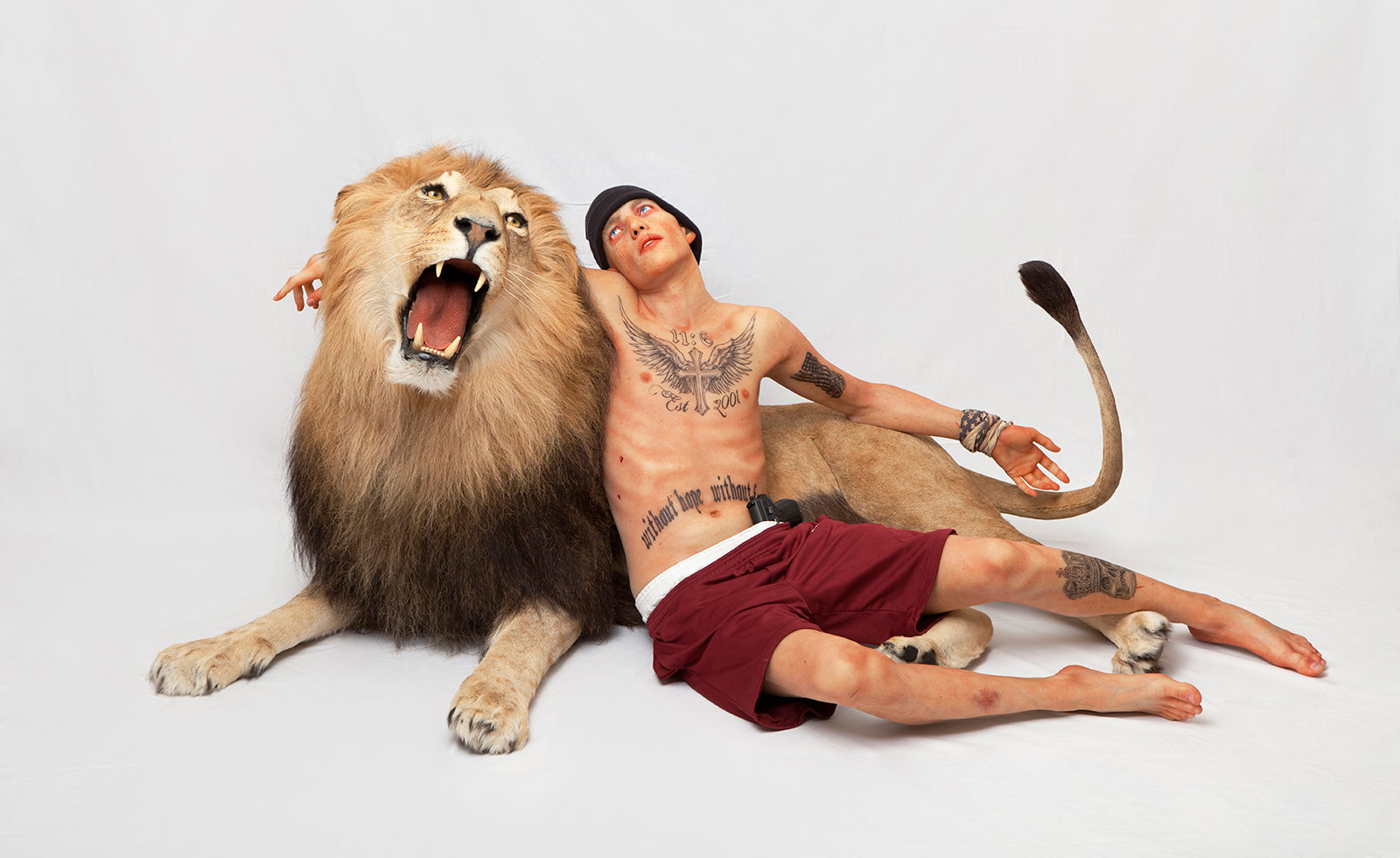 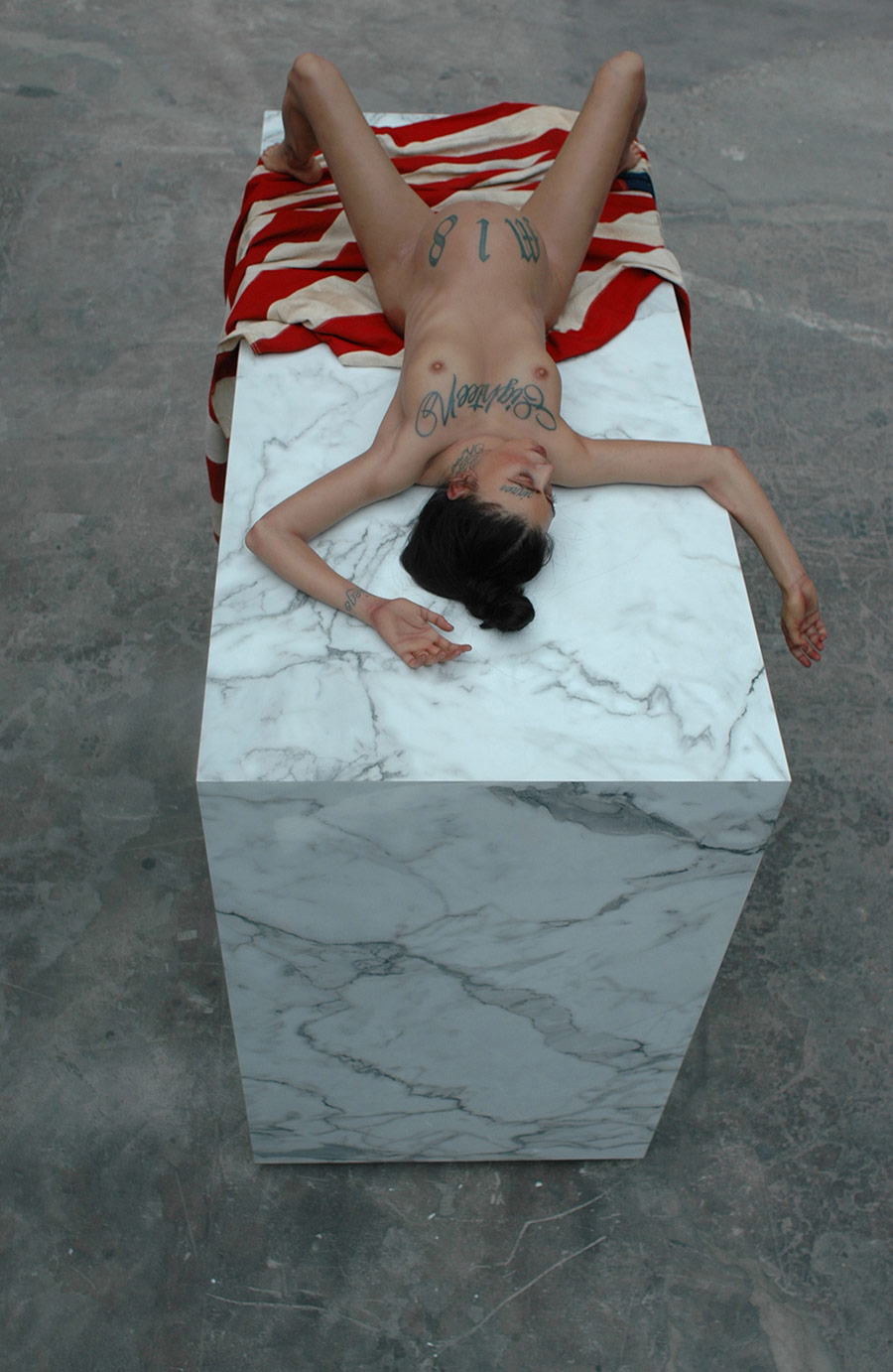 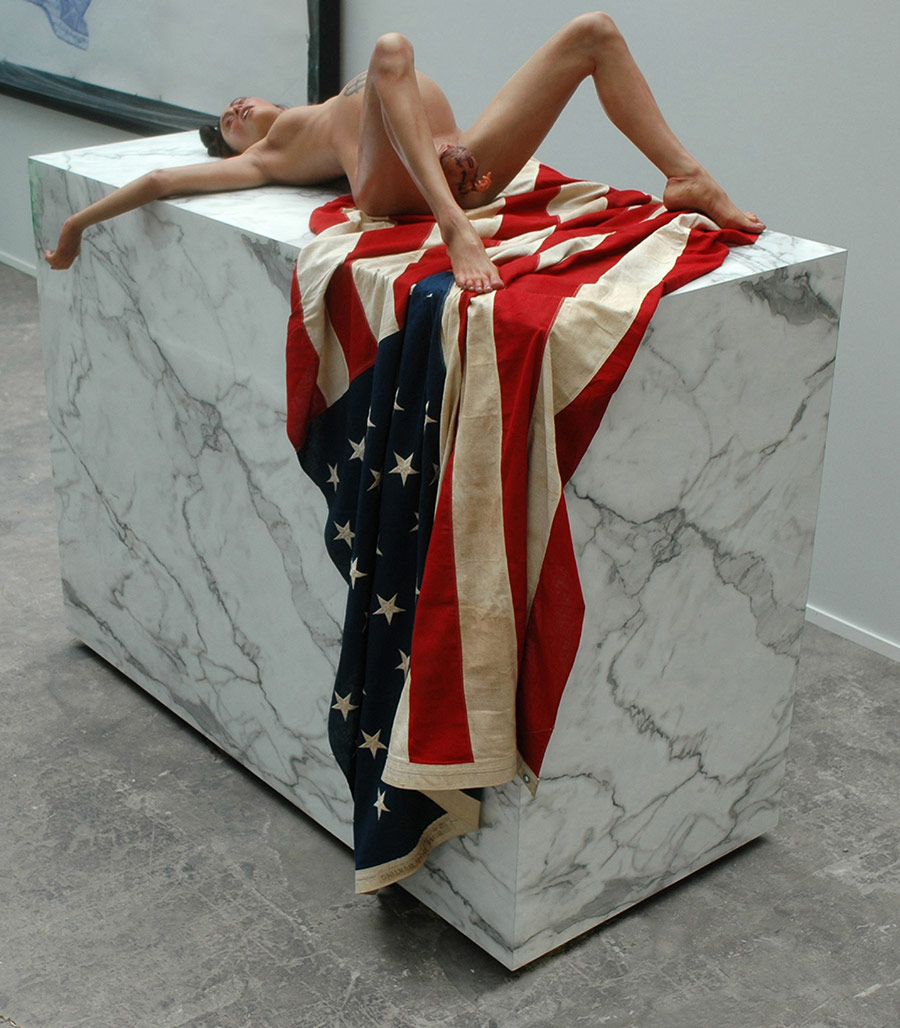 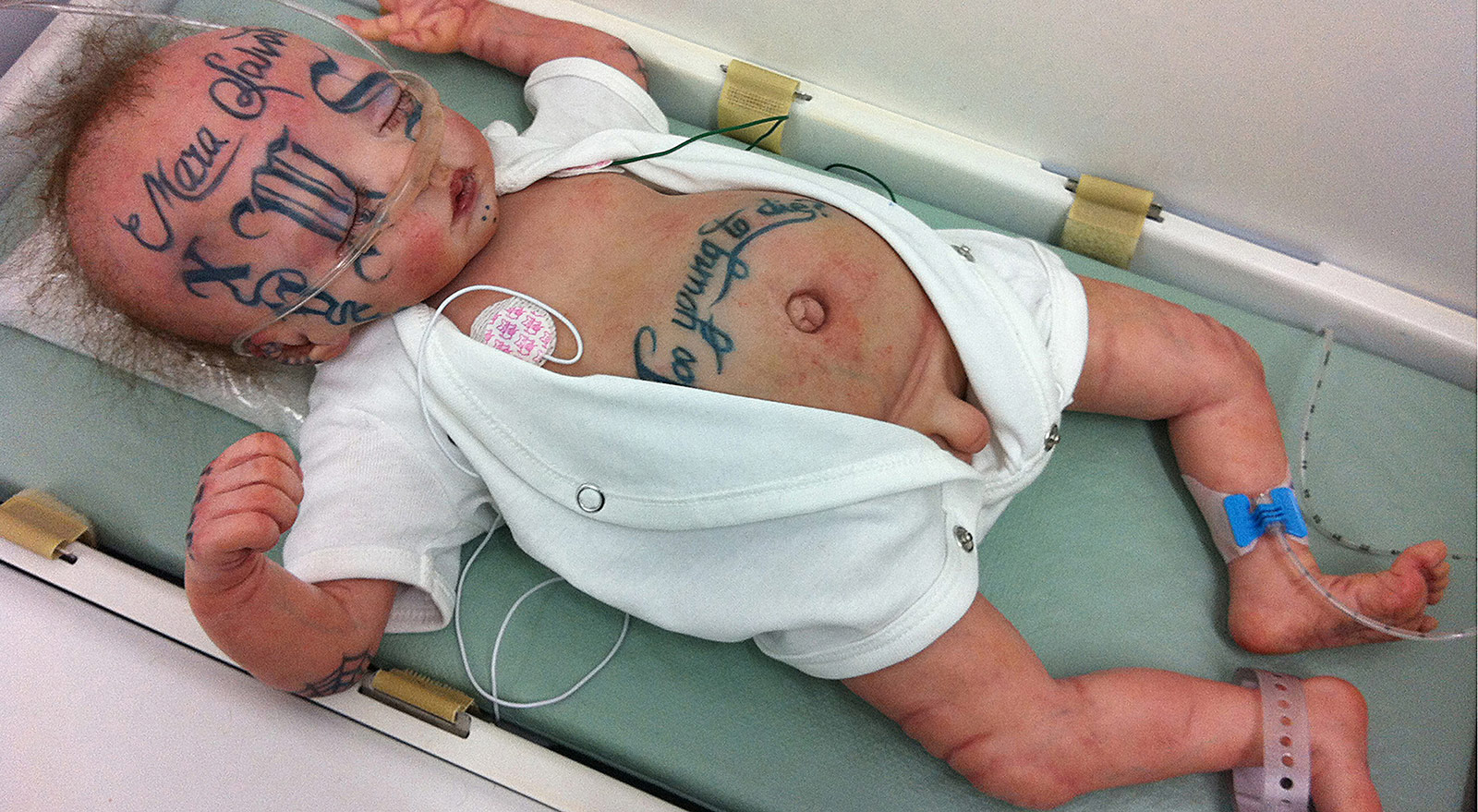 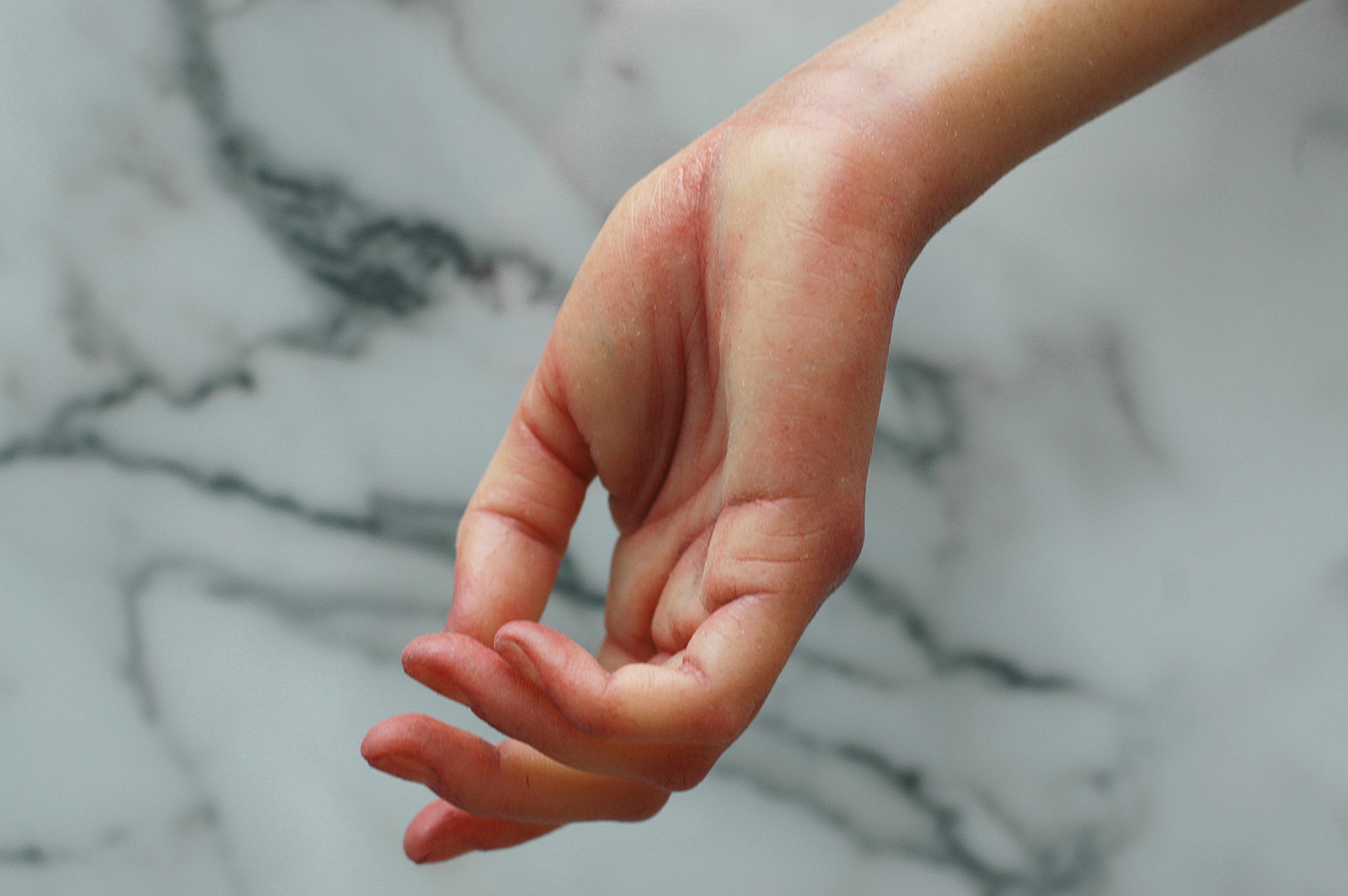 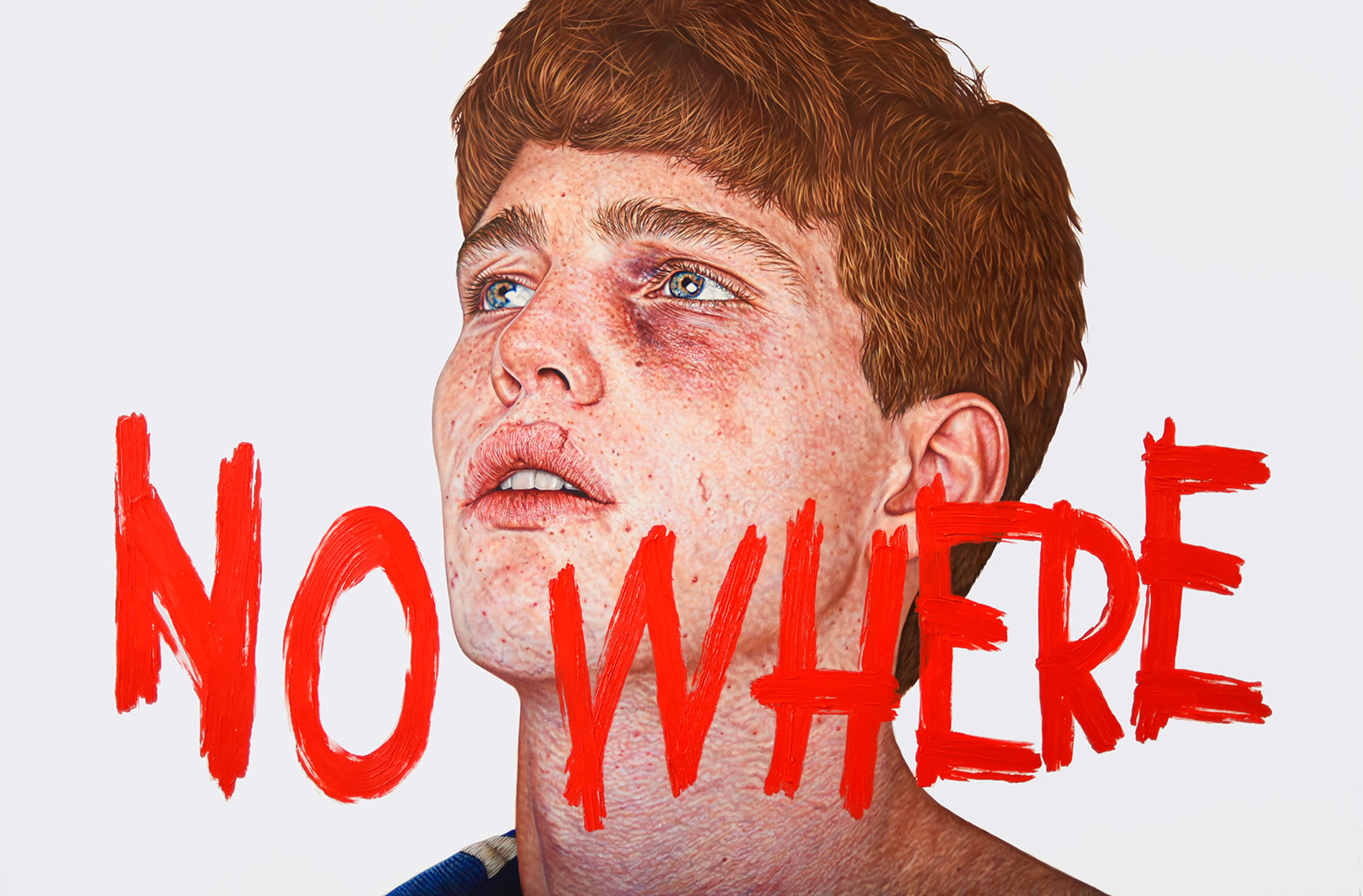