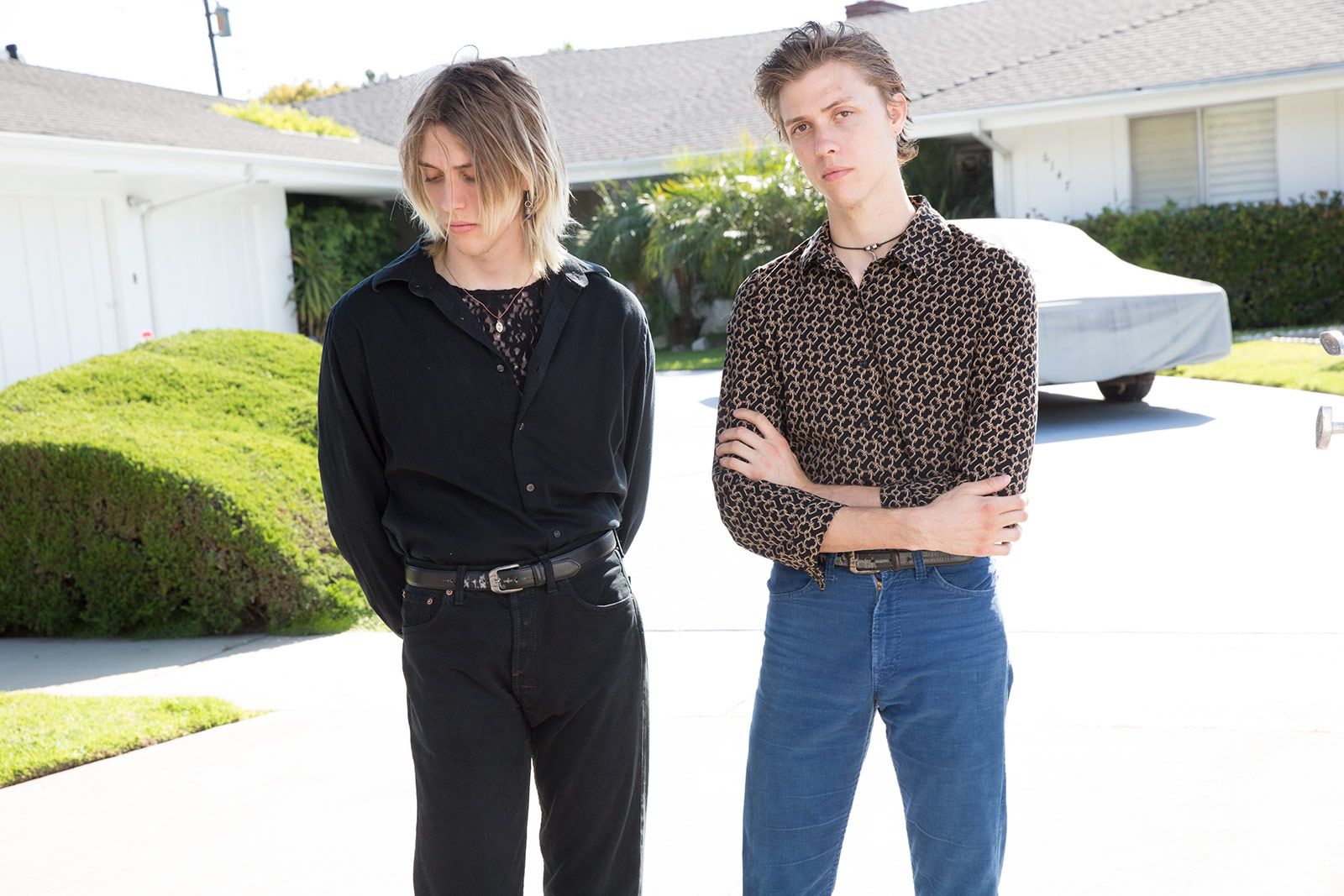 They’re identical twins, they describe their music as “Vada Vada”, and they are taking a classic bass-and-drums formation to the next level. They are Fletcher and Wyatt, and since 2011 they’ve been best know as The Garden. The Orange County twins have been playing music together for more than a decade, and they’ve already released four albums and been on several world tours. But The Garden don’t just stand out because of their lo-fi punk sound: Fletcher’s and Wyatt’s aesthetics called the eye of former Saint Laurent creative director Hedi Slimane, leading them to model at the brand’s FW13 menswear runway show. We’ve talked to them to get to know more about their last album, Haha, released by Burger Records and Epitaph Records.

Since you started The Garden, your sound has evolved quite a lot. How do you see yourselves in your last album? How’s the audience reacting at your live shows?
Wyatt: Haha, for me personally, is just stepping stone for us to keep moving forward. The audiences have been great. Mostly positive and loving.
Fletcher: Haha is definitely a stepping stone, we were very happy with how it turned out.

You’ve been touring a lot, so how did you manage to record it?
Wyatt: Haha was recorded over a long time span, and was spaced out due to excessive touring unfortunately. So it took a bit.
What do you take from the experience of touring all around the world?
Wyatt: Touring gives me a better perspective on the world and helps me to honestly comprehend things more. It’s pretty fun to fill my passport pages up too.
Fletcher: Touring can be really special, but it can also be a lot work. Regardless, it gives a wonderful outlook on different parts of the world. Travel is addicting for me, and to travel constantly while playing music isn’t a bad situation.
As twins, you’re used to spend lots of time together, but how has the band affected your relationship? How do you feel working together?
Wyatt: Working together is fine, and I assume and hope that it’ll continue to be. When mistakes are made and you work through them with understanding, your bond gets tighter.
Fletcher: Working together is always different. We are never really creating the same way. Things are always changing and evolving when it comes to making music.
You seem to do everything together, but who does what when it comes to writing?
Wyatt: Usually it’s me doing all of the work while Fletcher gives me back massages and brings me lemonades.
Fletcher: Wyatt loves to watch me create all the music while he takes notes on how I’m doing everything. He shows his gratitude by cooking for me sometimes too (laughs).

You’ve described your music as “Vada Vada”, your own invented music genre, but what does it mean?
Wyatt: Vada Vada is a term with meaning, and the way I use it is to put a word on my state of creativity. So our music is Vada Vada because we say it is… because while we were making the music, we weren’t trying to emulate anything else.
Fletcher: Creative expression without boundaries. The state of mind that doesn’t box itself in, and doesn’t limit itself to one specific formula.
Both of you have your own projects, Enjoy (Wyatt), and Puzzle (Fletcher). When did the idea of having a solo project began?
Fletcher: I started Puzzle a bit after we started The Garden in 2012. I was pretty mortified by some things that had happened in my life at the time, so I needed to write lyrics and I needed something I could do on my own to release the energy in a different form – so then Puzzle began. I’d like to think it’s evolved from then.
Wyatt: I started doing Enjoy before the Garden. It was merely to see if I liked my voice on recording. Then from there it turned into a hobby and continued as one.
In 2013, Heidi Slimane invited you to walk on Saint Laurent’s FW men’s runway show, and you’ve been modelling since then. How has this affected your lives?
Wyatt: We’ve done a quite a bit of modelling since and it’s totally been fine. Modelling offers certain perks to this life we’re building, and I appreciate it for what it is.
You’re used to cross-dress and to have an androgynous look. What’s your style philosophy?
Fletcher: I don’t have a style philosophy, and to be honest I’ve never even thought about that before. I just wear things and pick stuff that looks suitable to my current mind set. To me it doesn’t really feel like cross-dressing or dressing normal. I’m just putting clothes that I personally like on and I really don’t give it much more thought from there.
Wyatt: I’ve personally never cross-dressed. I admit my look has been considered androgynous and still is considered to be at times, but it was never a goal of mine. As far as fashion, it inspires me at times and it can be a lot of fun.
For 2016 you’ve announced new music. What can you tell us about it?
Wyatt: It’s not all entirely finished, but I am very, very excited to release it on whatever platform we end up choosing.