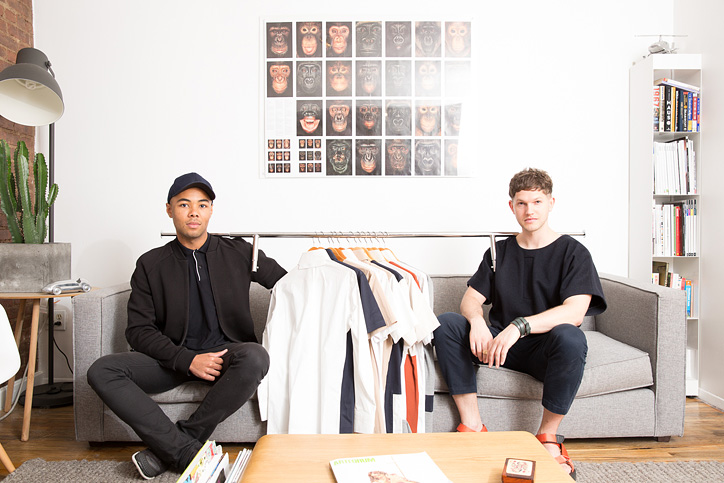 The New York based Dana Mason and Dakota Scott founded their STONE label in 2013. Drawing inspiration from architecture, animal kingdom, international lifestyles and everyday life in NYC, the duo incorporate a continuation of proven form with new design while maintaining practical function.

Let’s start from the beginning. Can you share the story of how your brand started?

Dana: We met each other through mutual friends, we used to hang out a lot. At that time I was interning in a company where you had to dress in a business casual style. There were not many options to how to dress and there were not too many brands that made that kind of clothing for men which you could wear to work and afterwards to a gallery. So, we started sketching and went through out different ideas, trying to expand our vision. That’s how our brand started.

Could you define the type of men who wears your clothes?

Dakota: We kind of target a man who is international, likes traveling and most likely works in a creative professional field. He has a cosmopolitan life, loves to stand out, but still remains appropriate for the multiple situations where he finds himself in.

Who do you look up to as a role model in designing?

Dana: We are huge fans of Phoebe Philo and what she does at Celine. Consuelo Castiglioni and her work at Marni and the Olsen twins with The Row are other examples.
Dakota: We see The Row and Celine as the female counter part of what we do. For menswear there are a lot of designers which we respect such as Raf Simons, we love his work . We also talk about architecture often and find the architect Zaha Hadid and her work really cool. She’s reinterpreting buildings, showing from different perspective points how beautiful they can be. Architecture inspires both of us a lot, we walk around the city endlessly just looking at all the details in the buildings.

What else besides architecture turns you on creatively ?

Dakota: Music is another big source of inspiration. We love art and like to be surrounded by it. We’ve made some of the paintings in our apartment. There is an indirect inspiration that links everything together. When we are painting, it’s only painting, when we are designing, it’s only about design elements, but each one feeds each other I would say.
Dana: We always get very inspired by animals and birds, their natural coloring and patterns. I think, we watch National Geographic more than anything (laughs).

Do you have any current music obsessions? For me, if I find a piece of music I like I can listen to it on auto-repeat for a while.

Dana: There is a station on Pandora called The Echocentrics. It’s like the music from 60s and 70s, kind of funky, something you would like to listen to when you are working.
Dakota: For me when I’m alone I enjoy listening to Yoko Ono. Her music is very contradictory and completely unexpected. Like some of the songs might be even jarring you, but they are beautiful at the same time. I like her boldness to say what she wanted and bring in what she was standing for. Her work received a lot of criticism, but she stood by and continued what she was doing. So, just the theory behind Yoko Ono is motivating and inspiring me and the music itself is just beautiful.

Lately I’ve been listening to Philip Glass’s “Einstein on the beach” over and over again. I find his minimal techno quite encouraging and motivating…

Dakota: Exactly. That’s a perfect background to work with!

How do you see your ultimate goals?

Dana: We are looking forward to becoming a full lifestyle brand, present collections twice a year, evolve an accessory and skin care lines. Since we have a long-term growth plan in mind, we are taking each step very intentionally with the integrity we want our brand to maintain. After you make one product perfect you can move to another one that will stand through the integrity that was created by the previous product. That is I think how we view the growth of our brand.

Can you describe your recent SS 2015 collection?

Dakota: We used the idea of casual sophistication a lot. I think this collection defines that, because the color palette is very understated, some of the items are just easy T-shirts which you can wear in your daily life. The way it was constructed highlights the minimalism of the idea behind that.

What’s your opinion on this recent trend of gender neutrality? Do you consider your brand to be gender-neutral?

Dakota: We wouldn’t consider our current pieces are gender-neutral, but we have certain women in mind who would look amazing in it. We first want to establish what we’ve done as menswear and then expand the limits, making it approachable to anybody who’s interested in it.

Any thoughts about womenswear?

Dakota: It’s definitely on the horizon. We are not trying to be androgynous and the base inspiration comes from traditional menswear, but that does not necessarily exclude women from wearing it. Tilda Swinton is one of the women who would look amazing in anything we do. Well, she would look amazing in anything anyone does (laughs). So, it’s definitely available for the right woman who wants to wear it. We are not going to start putting on some feminine elements in our clothes, they will always have a masculine touch to it.
Dana: Our core is traditional menswear, so, womenswear is not something we have experience in. I think we better understand what men want. Womenswear is a different language which we are not ready for yet.

What is your definition of modern luxury? Does it still exist?

Dana: Luxury has always existed, but we don’t consider our brand to be luxurious. Primarily, our goal is good quality in our garments and customer satisfaction. Luxury brands tend to focus on the next big, keeping things fresh. The world is changing, so modern luxury has to change with it.

Some designers completely reject the existence of luxury anymore.

Dakota: Luxury still exists. I think it’s all about how is one defining it. We know the demand has gone down a bit. Our previous collection was pure luxury (laughs). It had cashmere, python and didn’t get the response we thought it would, because people today care more about fast fashion than quality fashion, but that doesn’t mean that luxury doesn’t exist. It does exist, just that it’s in a smaller sphere. By rejecting the existence of luxury, you are kind of saying H&M has won.

Not H&M necessarily, but more the concept stores, like DSM and OC. As you’ve said, it’s obvious that the demand for luxury and high end stores went down.

Dakota: I feel like we are living in a very transitory moment and it’s amazing. We’ve still to see how this idea of old money luxury might fade out, the little pockets of that might still exist somewhere, but modern luxury is Tribeca, it is DSM, because it’s being marketed to our generation.

What are your plans for the next six months?

Dana: Designing the fall/winter collection and presenting it in February as well as promoting our spring items. We’ve shot one film and we are looking into more photo and video collaborations.
Dakota: The clothing speaks on it’s own, but there is so much more of the aesthetic that can be expressed through the video. We’ve recently found few videographers who want to collaborate with us. So, in the next six months we’ll hopefully be filming and releasing two or three films. That’s one of the things we enjoy the most doing within the whole Stone process. We love design, but we also love all the image-making you can incorporate to it. 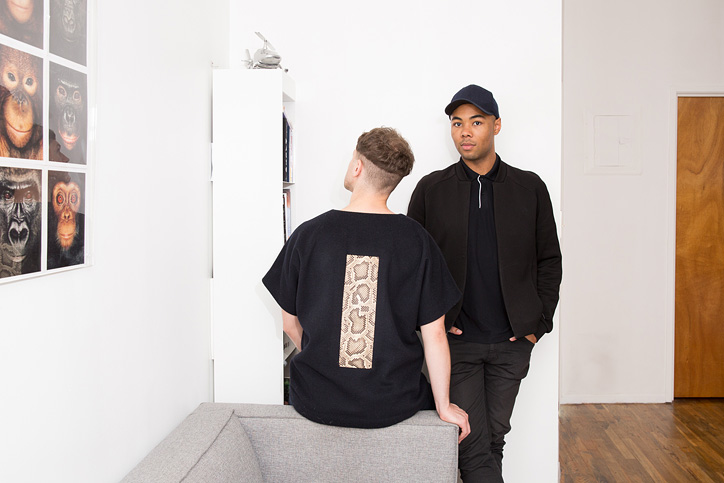 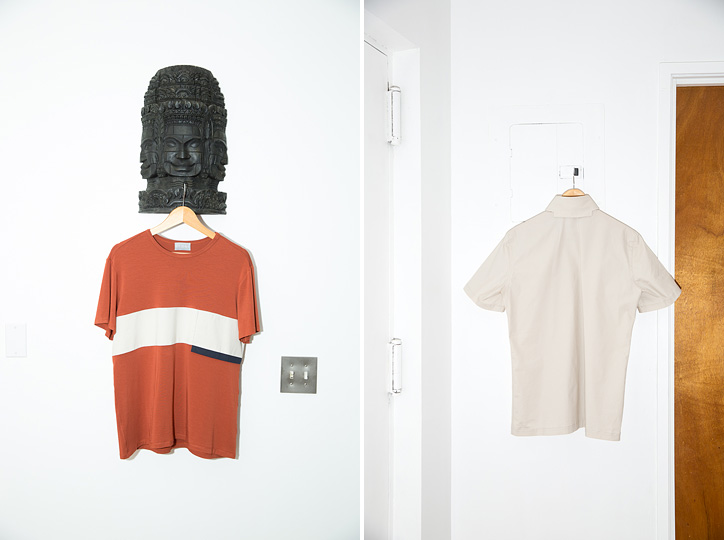 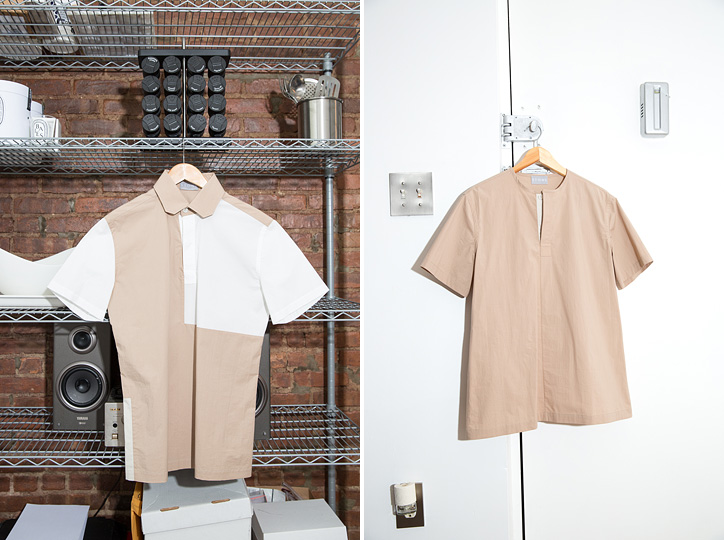 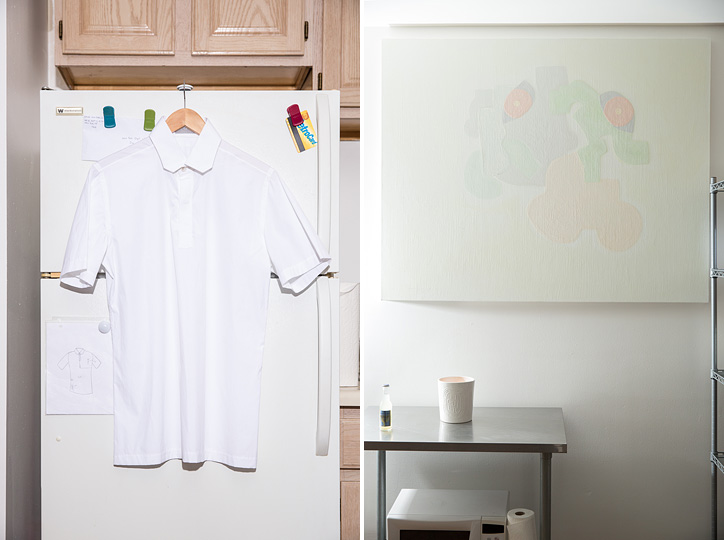 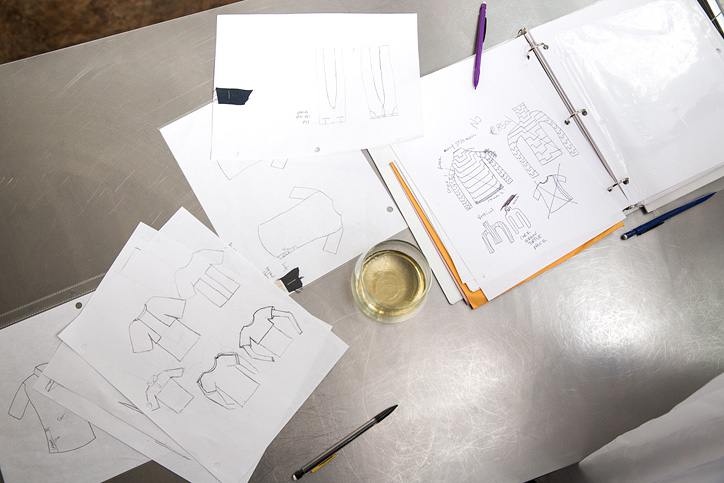