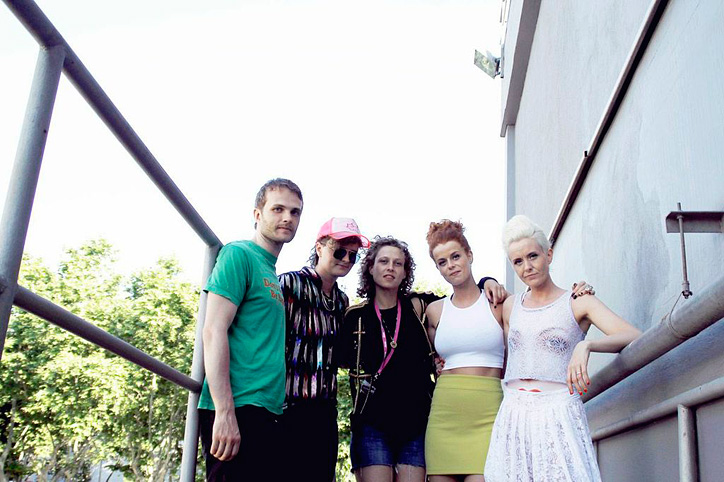 The lovely Icelandic band Sísý Ey provided the latest edition of Sónar with the touch of color that brought smiles to their crowd. A visionary project founded by Carmen Johannsdottir that offers house music in a whole new light. Fusing the beautiful voices of the Eyþórsdóttir sisters with the musical genius of DJ and Producer Oculus, it is an unexpectedly refreshing twist on electronic music that marvelled a very enthusiastic audience. We got to speak to them and a few things are certain from what we gathered. 2013 will see their debut album and the beginning of what promises to be a very bright career.

What is the story behind Sísý Ey? What was the original concept of the project?

Carmen: I originally got the idea. I was working with Elín Ey on her solo album and got to know her sisters Elísabet Eyþórsdóttir and Sigríður Eyþórsdóttir. And I thought, okay we have to start a band with these girls and make house music. So we started working together and we found Friðfinnur Oculus (DJ and producer), the rest is history. It all moved very fast.

Three of you are sisters, what is it like working together so closely?

Sísý Ey: It's wonderful, very nice. We get along very well, all of us. One big happy family, or maybe more like a marriage… cause of course we have ups and downs, but we're a happy marriage.

Have you been involved in any other projects before Sísý Ey?

Ellen: Yeah, I had a solo career. It was more of an acoustic act, country/blues.
Oculus: I've been in many bands before, of course I've got my solo project.
Sigríður: I also had a country duet with my husband.

What have you're influences been before this project?

Elísabet: We come from a country and blues background but growing up we were also influenced by singers like Lauryn Hill… stuff like that. Then Carmen brought house music to us and that became another big influence to us. Thanks to Carmen we started listening to a lot more techno and house music. It's always wonderful to listen to good music, whatever style it is… if it's good it's good. We don't care about the background.

Ain't got Nobody, your only released single has gotten a great deal of attention. What is the rest of your material like? Can we expect an album in the near future?

Sísý Ey: We have a lot of material. What we performed in our show at Sónar is not even all of our material. It's the same genre, it goes from deep house to Icelandic influences, it's definitely different. We try to mix a lot of things together. The feeling of the album is kind of like going through every stage of a relationship and a break up. It starts off with a sad tone but when you get to the third song you'll feel like you can take a spinning class (laughs).

When can we expect your first album?

Sísý Ey: Soon! What we can say is that there will be a lot of songs (laughs). It's almost ready but we don't have the date…

What have your favorite acts been in Sónar?

Is it your first time in Barcelona?

Carmen: I've been here before, my father is from here, but it's the first time for everybody else.

Sísý Ey: Awesome, everybody is so relaxed. We only need the good weather and we're happy! It has really been wonderful. We love Barcelona and Sónar.

Do you think you'll be coming back?

Sísý Ey: We really hope so. We need the sun!